Aims: Apelin is a predicted substrate for ACE2, a novel therapeutic target. Our aim was to demonstrate the endogenous presence of the putative ACE2 product [Pyr1]apelin-13(1–12) in human cardiovascular tissues and to confirm it retains significant biological activity for the apelin receptor in vitro and in vivo. The minimum active apelin fragment was also investigated.

Human angiotensin converting enzyme 2 (ACE2) has 40% sequence similarity with the C-terminal dipeptidyl-peptidase, ACE (Donoghue et al., 2000; Tipnis et al., 2000). ACE2 is expressed for example in heart, kidney and lung (Donoghue et al., 2000; Hamming et al., 2004) and is implicated in pathological conditions such as heart failure where it is up-regulated (Zisman et al., 2003; Goulter et al., 2004). A major role of ACE2 is to degrade angiotensin II to angiotensin (1–7) which then acts as a beneficial vasodilator and anti-proliferation agent, counter-balancing the actions of the vasoconstrictor angiotensin II (Santos et al., 2003, 2008). ACE2 is also a viral receptor for the severe acute respiratory syndrome coronavirus (Li et al., 2008) which down-regulates the enzyme from the cell surface resulting in angiotensin II-induced lung injury (Kuba et al., 2005). This has been the rational for the development of recombinant human ACE2 (rhACE2) in clinical trials for acute lung injury (Haschke et al., 2013). Interestingly, enhancing ACE2 activity pharmacologically or by gene transfer was effective in preventing or reversing PAH (Shenoy et al., 2011; Dai et al., 2015). Some beneficial actions of ACE2 are thought to be mediated by the conversion of angiotensin II to angiotensin(1–7). However, the possibility of interaction of ACE2 with other peptides was not clear until a screen of over 120 biologically active peptides reported only two others to be hydrolyzed with high catalytic efficiency by ACE2; dynorphin A 1-13, which has no reported vasoactivity and apelin-13, or apelin-36, resulting in the removal of the C-terminal phenylalanine, producing the metabolites apelin-13(1–12) or apelin-36(1–35) (Vickers et al., 2002). The loss of the terminal phenylalanine in apelin has been assumed to be a mechanism of degradation and inactivation of the peptide. Our aim was to understand the impact of this ACE2 cleavage reaction on the apelin signaling pathway.

Localization of Endogenous [Pyr1]Apelin-13(1–12) by Immunostaining

Figure 2. Selectivity of antisera determined by ELISA. (A) [Pyr1]apelin-13(1–12) antiserum demonstrated selectivity to the antigen CKGPMP (

Using the data from the cAMP and β-arrestin assays with the predominant cardiac isoform [Pyr1]apelin-13 used as the reference ligand, the relative activation of G protein-dependent and -independent signaling pathways by [Pyr1]apelin-13, [Pyr1]apelin-13(1–12) and apelin-17 were compared using bias analysis as described by van der Westhuizen et al. (2014).

Vascular smooth muscle apelin receptor-mediated contraction was exploited in a bioassay to compare the in vitro potency of apelin peptides. Experiments were carried out as previously described (Maguire, 2002) in endothelium-denuded saphenous vein with concentration-response curves constructed to [Pyr1]apelin-13(1–12) and apelin-13(F13A) (1 pmol/L–300 nmol/L). Agonist responses were expressed as a % of a terminal response to KCl (100 mmol/L). The inotropic action of [Pyr1]apelin-13(1–12) was determined in mouse paced RV (n = 6) and for comparison in two samples of human paced atrial appendage strips as described (Maguire et al., 2009). Data were expressed as % of the terminal response to CaCl2. Data from vascular and cardiac experiments were analyzed using a 4-prameter logistic curve (GraphPad Prism 6) to determine values of pD2 and EMAX.

Systemic Infusions in Rat and Echocardiography 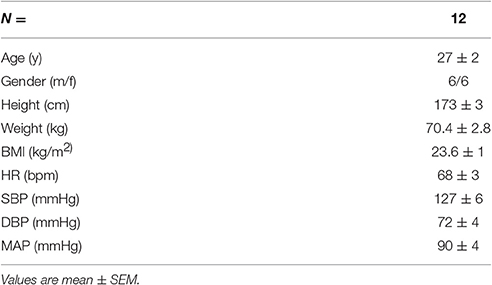 Exclusion criteria were ischemic heart disease, respiratory, renal or neurological disease, diabetes mellitus, hypertension, BMI > 30, BMI <18; smoker; pregnant; use of vasoactive medication or NSAIDS/aspirin within 48 h of study; current involvement in other research studies. An Omron HEM705CP oscillimetric sphygmomanometer was used to measure blood pressure and heart rate at baseline and then every 6 min in the contralateral arm. Periodically, a cuff around the upper arm was inflated for ~8 s to 40 mmHg then deflated for 4 s to interrupt venous return and during a 3 min measurement hand circulation was excluded by inflation of wrist cuffs to 200 mmHg. Changes in forearm volume were measured by mercury-in-silastic strain gauge with FBF subsequently expressed as ml/100 ml forearm volume per min. For infusion of peptides via a 16-gauge catheter (Portex, Kent, UK), the brachial artery (non-dominant arm) was cannulated (27-gauge needle, Cooper's Needle Works, Birmingham, UK) under local anesthesia (lignocaine 1%, Hameln Pharmaceuticals Ltd., Gloucester, UK). FBF was measured in both arms and the response to [Pyr1]apelin-13(1–12) presented as absolute change in forearm blood flow from the pre-infusion baseline value.

[Pyr1]apelin-13(1–12), supplied in sealed glass vials and stored at −40°C until required, was allowed to warm to room temperature and diluted with physiological saline to produce stock solutions that were then filtered (0.2 μm flat filter, Portex, Hythe, UK) before further dilution in saline. [Pyr1]apelin-13(1–12) was infused in three incremental doses during each visit. Doses were previously optimized in a pilot study. Each dose was infused for 6 min with a 20 min saline infusion washout period before the next dose was administered. At the end of the study sodium nitroprusside was infused at 3μg/min for 6 min as a positive control followed by a saline infusion as a negative control.

Measurements are mean ± standard error of the mean (SEM). Data analysis and statistical testing were performed using GraphPad Prism 6 to determine values of affinity (pKi) calculated from competition IC50 values using the Cheng and Prusoff equation, potency [pD2 (−log10 EC50, the concentration producing 50% of maximum response)] and maximum response (EMAX) as appropriate. Cell assay pD2 values were compared by one-way ANOVA followed by Tukey's multiple comparison test. For rat in vivo experiments the effect of [Pyr1]apelin-13(1–12) on BP, PV and VTI were expressed as % change from vehicle control in the same animal with other variables (SV and CO) expressed in absolute values. The effect of increasing doses of [Pyr1]apelin-13(1–12) on each parameter was compared to baseline vehicle control using repeated measures one way ANOVA followed by Dunnett's multiple comparison test. Similarly in the human FBF study the response to successive increasing doses of [Pyr1]apelin-13(1–12) was compared to pre-infusion baseline value using repeated measures one-way ANOVA followed by Dunnett's multiple comparison test.

All chemical reagents were purchased from Sigma (Poole, UK), unless otherwise stated. [Pyr1]apelin-13(1–12) was custom synthesized to GLP standard using Fmoc chemistry on a solid phase support matrix to 98% purity by Maldi-TOF Mass spectroscopy and RP-HPLC analysis. Peptides were tested for sterility and demonstrated to be pyrogen free and biological activity confirmed using the β-arrestin assay. All apelin peptides were synthesized by Severn Biotech (Kidderminster, UK). 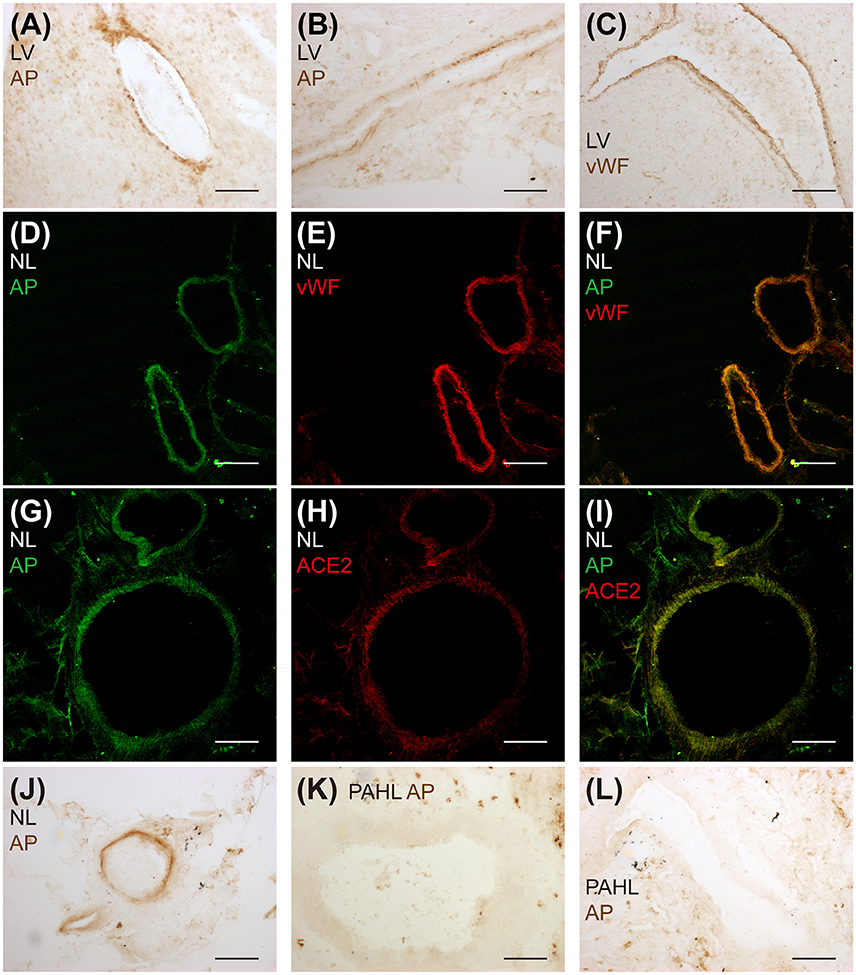 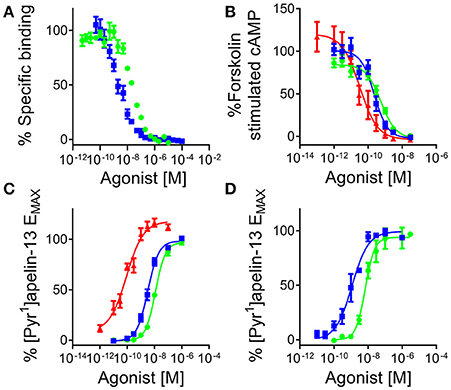 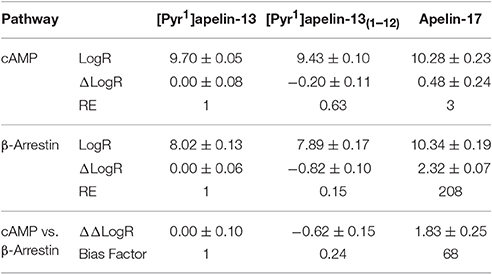 Table 3. Relative potencies of apelin peptides without and with pre-incubation with recombinant human ACE2 in a β-arrestin assay. 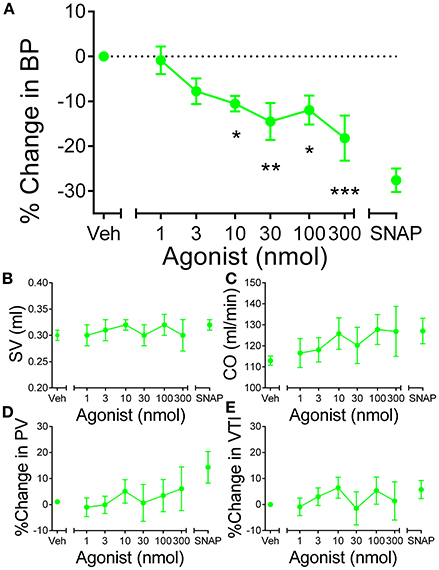 In human volunteers (n = 12), [Pyr1]apelin-13(1–12) (Figure 8) produced comparable dose-dependent increases in forearm blood flow to that which we have shown for [Pyr1]apelin-13 (Brame et al., 2015). No significant effects of either peptide on heart rate or blood pressure were observed at any dose (data not shown). 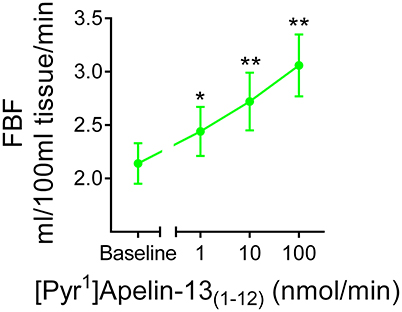 The 55-amino acid proapelin, derived from the 77-residue prepropeptide, contains a number of paired basic amino acids residues that are possible cleavage sites for endopeptidases to produce 13 to 36-residue isoforms (Tatemoto et al., 1998; Habata et al., 1999). While the identities of these peptidases remain unknown, a study reported the direct cleavage of proapelin to apelin-13 by proprotein convertase subtilisin/kexin 3 (PCSK3, or furin), bypassing the generation of longer isoforms (Shin et al., 2013). Post-translational modification results in the predominant apelin isoform detected in human cardiovascular tissue and plasma, [Pyr1]apelin-13 (De Mota et al., 2004; Kleinz and Davenport, 2004; Maguire et al., 2009; Zhen et al., 2013). The putative ACE2 metabolite of this cardiac peptide, [Pyr1]apelin-13(1–12), is the focus of our study but we have also explored the pharmacology of several other important apelin isoforms to better understand the apelin structure activity relationships, namely the minimum active fragment apelin-13(R10M), apelin-13(F13A) and apelin-17.

As described above, amino acid substitution studies have proposed a consensus on those amino acids within apelin-13 that are important for receptor binding and activation (Narayanan et al., 2015). The C-terminal phenylalanine (F13), adjacent proline and the N-terminal pyroglutamic acid were not identified as important. We have investigated whether the truncated peptides apelin-13(R10M), apelin-13(R9P) and apelin-13(P9M) retained significant binding and functional activity with the hypothesis that apelin-13(R10M) was likely to represent the minimum active fragment as it was the shortest fragment containing all the identified important amino acids. Results of the competition binding experiments and β-arrestin recruitment assays supported this hypothesis as do data from previous publications showing diminished Gαi-mediated signaling and calcium mobilization when the methionine (position 11 in apelin-13) was removed (Medhurst et al., 2003; Zhang et al., 2014), while others have demonstrated activity of apelin-12 (apelin-13 without the N-terminal pyroglutamic acid) in vivo (Pisarenko et al., 2011). Residues arginine 2 and methionine 11 are indispensable as they are required to form the crucial RPRL motif or provide steric volume (Langelaan et al., 2009; Macaluso and Glen, 2010; Gerbier et al., 2015). In contrast, although the C-terminal phenylalanine has been shown to make specific contacts within the binding pocket of the apelin receptor (Iturrioz et al., 2010), our experimental data suggested that its removal did not abolish binding or functional activity.

Early alanine scanning studies indicated that replacing the C-terminal phenylalanine with alanine did not abolish Gαi-mediated signaling, calcium mobilization (Medhurst et al., 2003) and receptor internalization (Fan et al., 2003). However, conflicting data have been reported for F13A, suggesting that it was an antagonist of the apelin receptor in terms of Gαi-mediated signaling ([Pyr1]apelin-13(F13A); De Mota et al., 2000) and hypotensive effect (apelin-13(F13A); Lee et al., 2005). In this study, we found that apelin-13(F13A) resembled [Pyr1]apelin-13(1–12) in receptor binding, cell based assays and the vasoconstrictor bioassay. Based on our results apelin-13(F13A) behaves as an apelin agonist with no evidence of receptor antagonism.

Apelin-17, despite its unclear biosynthetic pathway, has been reported to have equal or higher binding affinity and potency in inhibiting cAMP accumulation and inducing receptor internalization compared with [Pyr1]apelin-13 (Medhurst et al., 2003; El Messari et al., 2004). We investigated apelin-17 in our assays and consistently found higher binding affinity and higher potency than [Pyr1]apelin-13 in the cAMP and β-arrestin assays. Intriguingly, apelin-17 appeared to be more biased for β-arrestin compared to G protein signaling relative to the reference agonist [Pyr1]apelin-13. This suggests that N-terminal extension of apelin-13 may result in peptides that stabilize different conformations of the apelin receptor and may be a mechanism by which apelin receptor activation is fine-tuned at the cellular level.

Implication on the Interactions between the Apelin and Renin-Angiotensin Systems 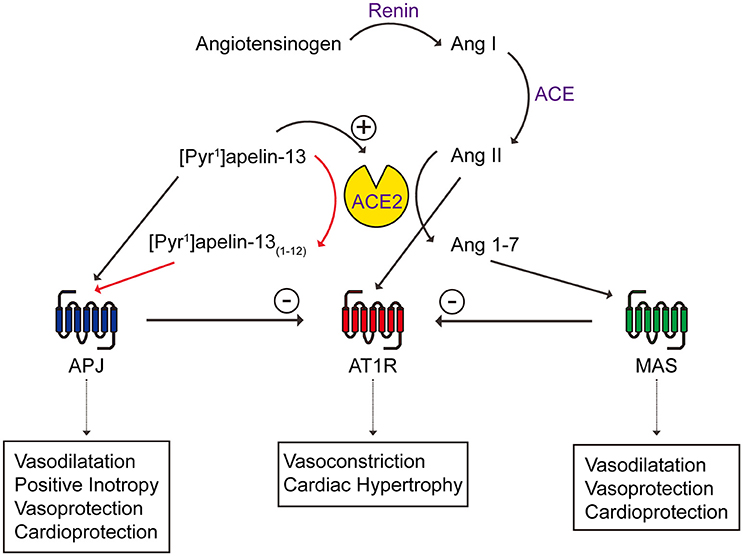 We thank the theater and consultant staff of Papworth hospital for tissue collection.

Copyright © 2017 Yang, Kuc, Brame, Dyson, Singer, Glen, Cheriyan, Wilkinson, Davenport and Maguire. This is an open-access article distributed under the terms of the Creative Commons Attribution License (CC BY). The use, distribution or reproduction in other forums is permitted, provided the original author(s) or licensor are credited and that the original publication in this journal is cited, in accordance with accepted academic practice. No use, distribution or reproduction is permitted which does not comply with these terms.