Depression, a widespread mental disorder, influences over 10% of the world's population with profound social and economic consequences at any given time (Ferrari et al., 2014). Even though stress and monoamine neurotransmitter deficiency have been studied as two major causes of depression (Andrus et al., 2012) and researchers over the last 50 years have provided considerable evidence that the dysfunction of monoamine neurons is an important underlying pathology in major depressive disorder (Hamon and Blier, 2013), the detailed mechanisms related to its pathogenesis are still elusive. As a result, a number of patients fail to recover from chronic depression even though lots of medications have been applied to clinical treatment for depressive disorders, including NE reuptake inhibitors (NRIs), selective serotonin reuptake inhibitors (SSRIs), monoamine oxidase inhibitors (MAOIs), tricyclic antidepressants (TCAs), and antidepressants on DNA methylation patterns, etc. (Baudry et al., 2010; Massart et al., 2012; Kato and Chang, 2013).

We hypothesized that LC noradrenergic neurons projecting to the hypothalamus (PVN) may functionally participate in the pathogenesis of depression and the α2A-AR plays a principal role by modulating NE release. To confirm the hypothesis, we measured the NE release signal in the PVN evoked by electrical stimulation in LC through amperometric detection with carbon fiber electrode. We also detected the extracellular level of NE in the PVN by microdialysis in vivo. Western blot analysis was carried out to evaluate the expression level of α2A-AR in the hypothalamus.

Male Wistar rats weighing 180–200 g (purchased from Animal center of Nanjing Qinglongshan and the Animal Experimental Center of Dalian Medical University) were used in our research. Animals were housed at the conventional dwelling unit under standard conditions (5 per cage, room temperature of 24°C, relative humidity of 45–65%, 12 h light/dark cycle), ad libitum. All experiments were carried out under the guidelines of the National Institutes of Health Guide for the Care and Use of Laboratory Animals.

Behavioral tests included sucrose consumption test and open-field test. Sucrose consumption test was carried out as follows: two bottles of 1% sucrose water were randomly located in every cage at the first 2 days, which were turned into two bottles of tap water at the third day. Following with 15-h deprivation of food and water intake, a bottle of tap water and a bottle of 1% sucrose water were given to the rats. The consumption amount of 1% sucrose and total water were measured in the next 2-h. The sucrose preference percentage was calculated according to the following formula: Sucrose preference = sucrose intake (g)/[(sucrose intake (g) +water intake (g)] (Cui et al., 2014).

Open-field test was carried out to all the rats. Each rat was placed in the center of a white square box (length, 55 cm; width, 39 cm; height, 20 cm) for a 5-min observation. During the 5-min observation, horizontal and vertical exploratory locomotor activities were scored for the test.

Amperometric detection of NE signals with carbon fiber electrode was performed according to our previously described method (Gong et al., 2015). Rats were anesthetized with pentobarbital (50 mg/kg, i.p.), and fixed at the stereotaxic instrument (Life Technology Co. Ltd. of Shenzhen City). A bipolar stainless steel electrode (diameter: 1.0 mm) sent electrical stimulation (Isolated Pulse Stimulator model 2100; A-M Systems) into LC (A: − 10.0 mm; L: ± 1.4 mm; V: − 7.5 mm) according to the rat brain atlas (Paxinos and Watson, 1986). The amperometry working electrode was a cylindrical carbon-fiber electrode insulated by a glass capillary. The detecting carbon fiber electrode was inserted into the PVN (A: − 1.5 mm; L: ± 0.4 mm; V: − 8.5 mm). The reference electrode was a silver wire coated with AgCl and connected to the neck muscle tissue. A patch-clamp amplifier (PC-2B, INBIO, Wuhan, China) was applied under voltage-clamp mode, with the gain of 0.5 mV/pA and a CFE voltage of a constant + 700 mV for amperometry. All data were low pass filtered at 20 Hz and acquired by a data acquisition system with a digital interface and software (iPDA-0.1; INBIO, Wuhan, China). Norepinephrine release signals evoked by electrical stimulation (1.0 mA, 100 Hz, 100 pulses) in LC in vivo were analyzed. After recording stable NE signal, yohimbine (Sigma–Aldrich, 3 mg/kg, intraperitoneal injection) (Paalzow and Paalzow, 1983; McAllister, 2001) was administered to the rat and NE release signal was recorded again 30 min later to assess the function of α2-AR. The rats were euthanized with isoflurane and the whole brains were fixed in 10% formalin solution to verify the brain region.

In vivo microdialysis was carried out according to a previously described method (Niwa et al., 2007). Rats were anesthetized with pentobarbital (50 mg/kg, i.p.) and were fixed in a stereotactic instrument (Life Technology Co. Ltd. of Shenzhen City). The intracerebral guide cannula (MBR-10, BASI, West Lafayette, IN 47906, USA) was implanted 1 mm above the PVN (A: − 1.5 mm, L: ± 0.4 mm; V: − 8.5 mm) and was secured onto the skull by stainless screws and dental acrylic cement. After 24 h, a microdialysis probe (MBR-1-10, 1 mm membrane length, BASI) was embedded into the guide cannula, and the ACSF was continuously perfused into the PVN through the probe. During the microdialysis experiments, dialysates were collected in 1-h increments at a velocity of 1 μL/min, and then 50 μL aliquots were used to measure NE levels with an ELISA kit (CSB-E07022r, CUSABIO, Wuhan, China). BRL-44408 maleate (Sigma-Aldrich, 3 mg/kg, i.p.) was administered to rats and NE dialysates were collected again to assess the function of α2A-AR (Miksa et al., 2009).

The protein from the hypothalamus (the hypothalamic tissue was dissected as the center between gray nodules and optic chiasma prechiasmal border as prozone, back of corpus albicans as posterior and bitemporal groove on both sides; about 4 mm width, 2 mm depth and 4 mm length) was extracted by using an extraction kit (Keygen Biotech, China), and the protein content was measured by a BCA protein assay (Keygen Biotech, China). For Western Blotting, the proteins (20 μg) for each sample were loaded into a 10% SDS-polyacrylamide gel for electrophoresis. Then, the protein components were transferred to polyvinylidene difluoride (PVDF) membranes, and then blocked with 5% BSA in TBST (TBS+0.1% Tween-20) for 1 h, and then immunoblotted overnight at 4°C with primary antibody for α2A-AR (#14266-1-AP, Proteintech, USA). Subsequently, membranes were washed three times in TBST and incubated with a horseradish peroxidase-conjugated secondary antibody (anti-rabbit, 1:5,000, ZSJQ-BIO Company, Beijing, China) for 1 h at room temperature. The infrared band signals were detected using BIO-RAD (Hercules, CA, USA) gel analysis software. The blots were then washed with TBST, blocked for 1 h and incubated with the primary antibody β-actin (ab6276, Abcam), for loading control. The Densitometric analysis of immunoreactivity was conducted using the NIH Image J software and normalized to the immunoreactivity of the control rats.

The data were analyzed using GraphPad Prism (GraphPad Software Inc.) and SPSS 21.0, expressed as mean ± SEM., and statistical analyses were performed using a paired t-test or an unpaired Student's t-test for two-sample comparison, two-way ANOVA was used to evaluate the effects of antagonists between groups (Figures 2C, 3B, 4B), and the microdialysis data summarized in Figure 3A were assessed by repeated-measures ANOVA. Significance was set at p < 0.05. 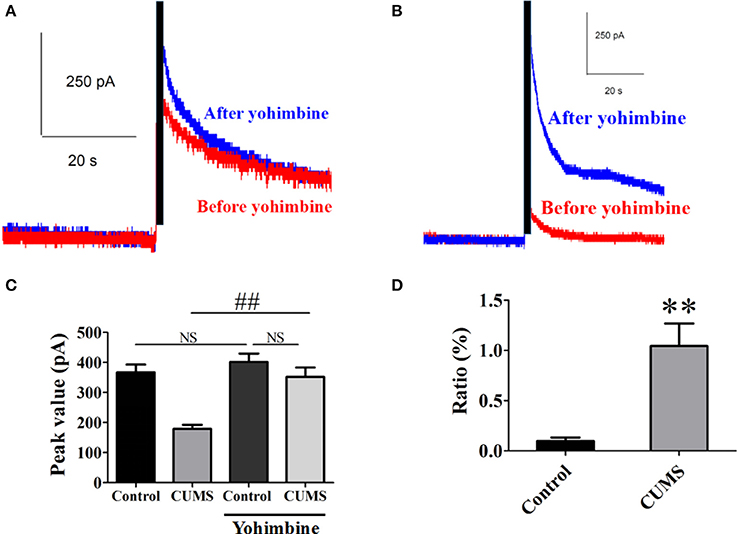 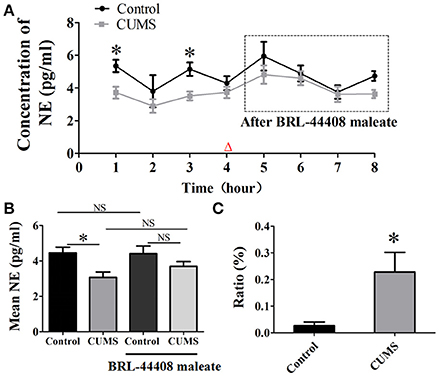 Stressors can damage LC (Samuels and Szabadi, 2008). Moreover, damage or loss of LC noradrenergic neurons could result in the decrease of NE in the central nervous system (Marien et al., 2004; Rommelfanger and Weinshenker, 2007; Weinshenker, 2008). In our study, we found yohimbine, α2-AR antagonist (Makau et al., 2016), significantly increased the peak value of elicited NE release from noradrenergic nerve fibers in the PVN evoked by electrical stimulation in LC in the CUMS rats. It is generally recognized that the α2-adrenergic receptors are coupled with the inhibitory guanosine triphosphate (GTP)-binding protein, which may be involved in the receptor-mediated transmembrane signaling by regulating adenylate cyclase activity (Tsuda et al., 2003). This further weakens the calcium current mediated by voltage-gated calcium channels and the potassium current reliant on the calcium ions, then causes a decrease in the concentration of cytoplasm Ca2+, in turn inhibits the synthesis and release of NE (Abdulla and Smith, 1997). Yohimbine increases the release of NE in the PVN by inhibiting the signaling pathway of α2-AR, suggesting that the functional change of the presynaptic membrane α2 receptor has a connection with the targets for the treatment of depression.

However, although α2A-ARs contributes the significantly inhibitory effect on NE release, other subtypes of α2-AR, such as α2B-AR and α2C-AR may have less effect on NE release, indicating that α2-adrenoceptors antagonists might be better drugs for the treatment of depression. It also cannot be ignored that yohimbine also augmented anxiety both in human and rodents (Davis et al., 1979; Morgan et al., 1993; Altobelli et al., 2001), and the enhanced central noradrenergic activity is associated with the activation of fear and anxiety circuitries. This paradox may precisely result from the increase of NE by yohimbine, which may induce the activation of stimulatory α1- and of β-adrenergic receptor, the latter may mediate the enhancement of neuronal activity and further induce the activation of anxiety (Montoya et al., 2016). Hence, the dose and duration of α2-adrenoceptor antagonists for the treatment of depression require future research.

This study was carried out in accordance with the recommendations of National Institute of Health Guide for the Care and Use of Laboratory Animals (NIH Publications No. 80-23) revised 1996. All experimental protocols were approved by the animal studies committees of the Dalian Medical University and the committee on the Ethics of Animal Experiments of the Wannan Medical College, and all efforts were made to minimize the number of animals used and their suffering.

Copyright © 2017 Wang, Wang, Wu, Huang and Li. This is an open-access article distributed under the terms of the Creative Commons Attribution License (CC BY). The use, distribution or reproduction in other forums is permitted, provided the original author(s) or licensor are credited and that the original publication in this journal is cited, in accordance with accepted academic practice. No use, distribution or reproduction is permitted which does not comply with these terms.