Commentary: Alpha Synchrony and the Neurofeedback Control of Spatial Attention

Alpha-band activity is one neural signature, long speculated to be involved in biasing neural processing toward attended information (see Van Diepen et al., 2019). Many studies propose alpha-lateralization, i.e., a concomitant decrease in alpha-band power in one hemisphere and an increase in the other, as a neural marker of shifts in visuospatial attention. In recent work, Bagherzadeh et al. (2019) examined the potential causal role of alpha-band modulations for the deployment of visuospatial attention. In a neurofeedback task, participants learned to upregulate parietal alpha-band amplitude-lateralization, while markers of attentional shifting were measured. Crucially, enhanced alpha-lateralization at left and right parietal MEG sensors was beneficial for doing well in the orientation match-to-sample task because it increased the contrast of the to-be-remembered stimulus. The central question was whether upregulated alpha-lateralization led to a corresponding shift in visuospatial attention. Across different measures, evidence was provided for such a shift: (1) For the neurofeedback task, the authors reported enhanced probe-related evoked responses contralateral to the hemisphere, for which alpha was downregulated. Outlasting the neurofeedback task, (2) alpha-band power, and (3) reaction times still depicted lateralization for neutral trials of a subsequent Posner-paradigm. Finally, (4) gaze orientation shifted contralaterally to the hemisphere showing decreased alpha in a free-viewing task. 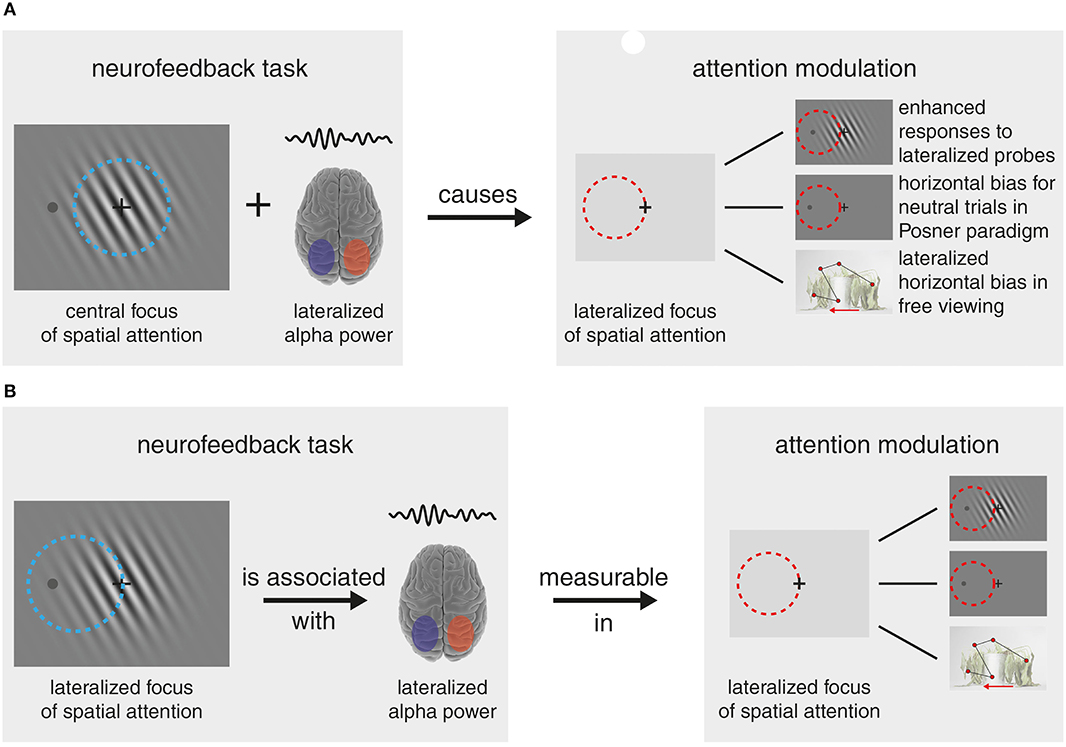 Figure 1. Lines of Argumentation (A) The authors' line of argumentation sees the training of parietal alpha-band amplitude lateralization (in the example left > right) in the neurofeedback task independent from a central focus of spatial attention. The trained alpha-lateralization then caused a corresponding prolonged bias/shift in the focus of spatial attention (here to the left), which manifested in enhanced responses to lateralized probes during the neurofeedback task, an outlasting horizontal bias in neutral trials of a Posner paradigm task and a lateralized bias in a free-viewing task. (B) The alternative reasoning that explains the main experimental findings equally well: In order to lateralize individual alpha-band power, participants covertly shifted spatial attention toward a lateral portion of the centrally presented stimulus. Note, claiming a causal relationship between alpha-lateralization and spatial attention, is not warranted in the presence of competing explanations. Note that some figure content is adapted from https://www.somersault1824.com/ under CC BY-NC-SA 4.0 license.

The authors stated that it was unclear which strategies participants used to lateralize the alpha-amplitude and proposed that shifting attention per se was not required for the task because it only involved a centrally presented stimulus and that participants thus relied on contingent feedback to learn to alter alpha-lateralization. Nonetheless, covertly shifting attention represents an effective strategy to generate reliable modulation of measurable alpha-band activity often exploited in BCIs (Jensen et al., 2011; Treder et al., 2011).

Furthermore, the results of the analysis of microsaccadic shifts are incoherent with respect to other measures of attention rendering an unequivocal interpretation difficult. While non-biased microsaccades in the neurofeedback task are interpreted as evidence for the absence of a spatial-attentional shift, such a bias was also absent for the neutral Posner trials. Nevertheless, for this condition, a bias in attention was proclaimed because alpha-power and reaction times were lateralized according to the trained direction in the neurofeedback task.

Most crucially, for the neurofeedback task there is a finding strongly pointing toward employed spatial attention: Responses to probes, laterally presented during this task, show a clear amplification for the trained side. Such amplification is usually interpreted as a sensory gain control-related modulation, associated with a shift of spatial attention (Hillyard et al., 1998). Confusingly, this finding is described as a “bias in visual processing,” which is probably the most pointed description of an effect of attention, but not interpreted as related to attention. Thus, ultimately the findings seem more concordant with an idea that participants used a covert-spatial-attention-related strategy to alter the alpha-lateralization (see Figure 1B). Hence, the claim alpha-lateralization causes a shift in spatial attention cannot be made unequivocally.

Methodologically, Bagherzadeh et al. (2019) reported a state-of-the-art study tackling a very relevant and pressing research question of how selective attention is implemented in the human brain. By approaching such research questions from different and innovative methodological angles, as done in the discussed study, future work will much more likely elucidate, for instance, the intertwined relationship between alpha-lateralization and attention. The modulation of alpha lateralization and evoked potentials combined with readily available neurotechnology will certainly propel knowledge accumulation in the near future and impact applications beyond basic science, e.g., in neuropathology. However, beyond all methodological efforts, we want to stress that a claim, as far stretching as “alpha is causally involved in modulating spatial attention” (for a controversial view see Tune et al., 2019; Gundlach et al., 2020), any confound between alpha-lateralization and spatial attention during the neurofeedback task needs to be ruled out or controlled. This could mean to examine or experimentally manipulate different strategies during the neurofeedback task to simplify the identification of causal structures (Grosse-Wentrup et al., 2016) and control for reverse causation (Angrist and Pischke, 2008; Spirtes and Zhang, 2016). Furthermore, it is important to go beyond linear correlation tests that might occlude potential non-linear dependencies in neuroscientific data (Grosse-Wentrup et al., 2011; Forschack et al., 2017). All these approaches will (hopefully) help to represent the potentially complex relationship between attention and neural activity on a level that is neither too simplified nor too complex.

This work was supported by Deutsche Forschungsgemeinschaft (MU 972/26-1).

The authors acknowledge support from the German Research Foundation (DFG) and Universität Leipzig within the program of Open Access Publishing.

Copyright © 2020 Gundlach and Forschack. This is an open-access article distributed under the terms of the Creative Commons Attribution License (CC BY). The use, distribution or reproduction in other forums is permitted, provided the original author(s) and the copyright owner(s) are credited and that the original publication in this journal is cited, in accordance with accepted academic practice. No use, distribution or reproduction is permitted which does not comply with these terms.