Purpose: To explore molecular alterations and their correlation with the survival of patients with glioblastoma (GBM) with corpus callosum (CC) involvement (ccGBM).

Conclusion: PDGFRA alterations are significantly associated with the occurrence and poor prognosis of ccGBM. ccGBM with PDGFRAamp/mut may be classified as a single subtype of GBM that has a similar survival rate to DMG. PDGFR inhibitors may be a promising treatment method for ccGBM.

Glioblastoma (GBM) is highly malignant tumor (World Health Organization [WHO] grade IV), with an annual incidence of 3.1 per 100,000 and a 5-year survival rate of less than 3% (Ohgaki, 2009; Wirsching et al., 2016). GBM is very invasive, typically infiltrating along white matter tracts (Giese and Westphal, 1996; Giese et al., 2003). As the largest interhemispheric fiber bundle in the human brain, the corpus callosum (CC) is frequently invaded by GBM (Nazem-Zadeh et al., 2012). GBM with CC involvement (ccGBM) can be classified into two types. In one type, the lesion invades only one side of the hemisphere and the CC (non-butterfly ccGBM). The other type is known as butterfly GBM (bGBM) and involves the corpus callosum and both cerebral hemispheres (Louis et al., 2007; Nazem-Zadeh et al., 2012; Ho et al., 2013; Komori, 2017). ccGBM has a poorer prognosis than GBM without CC involvement (non-ccGBM) and is associated with incomplete resection or residual tumor after surgery (Talos et al., 2006). Whether the overall survival (OS) rate of ccGBM can be prolonged by surgical resection has been controversial (Dziurzynski et al., 2012; Chaichana et al., 2014; Dayani et al., 2018; Opoku-Darko et al., 2018; Franco et al., 2020). The present consensus is that ccGBM has a poorer prognosis than common GBM regardless of whether resection is performed (Chen et al., 2015; Liang et al., 2016).

At present, the WHO classification of glioma is based on pathological diagnosis and analysis of molecular alterations, which provides a more precise diagnosis and better comprehension of the type of glioma. Previous studies have revealed the association between some molecular alterations and the survival rate of glioma. For example, glioma with IDH or TERT mutation has a better prognosis, and glioma with H3F3A or HIST1H3B/C mutation is classified as diffuse midline glioma and has a poorer prognosis (Onizuka et al., 2020). While the molecular characteristics of non-ccGBM are established, the molecular characteristics of ccGBM were unknown until now. In this study, we aimed to explore the molecular alterations in ccGBM and determine their association with survival.

Retrospective clinical data of 1232 glioma patients were obtained from electronic medical records (EMRs) in the Department of Neurosurgery at our hospital between January 2016 and July 2020. The enrollment criteria were patients 18–80 years of age who underwent resection at our hospital, who were diagnosed with supratentorial WHO II-IV grade gliomas by pathology, received testing of the molecular alteration status of the tumor, had extent of resection (EOR) values calculated and attended postoperative follow-up regularly. The exclusion criteria were as follows: (1) patients with infratentorial glioma, (2) patients who underwent only biopsy, (3) patients for whom the pathological diagnosis could not be confirmed, (4) patients with diffuse midline glioma, and (5) patients lost to follow-up. This study was carried out according to the principles of the Helsinki Declaration and approved by our institutional ethics committee (No. S2014-096-01). Written informed consent for surgery and molecular testing was previously provided by all patients or their relatives.

Radiotherapy plus concomitant and adjuvant TMZ chemotherapy for GBM were recommended (Stupp et al., 2005; Duffau and Taillandier, 2015). Regular MRI scans and follow-up were performed every 3 months. The end point of follow-up was March 2021. The progression-free survival and overall survival rates were calculated according to the results of the follow-up.

Statistical analysis was performed using SPSS 21.0 software (SPSS Inc., Chicago, IL, United States). The Shapiro-Wilk test was used to test the normality of the data. Student’s t and χ2 (or Fisher’s exact test) tests were used to compare continuous parametric and categorical variables between groups, respectively. The Mann-Whitney U-test was used to compare continuous non-parametric variables, such as the EOR value, between groups. Univariate and multivariate logistic regression were used to evaluate the correlation between ccGBM and clinical factors and molecular alterations. Survival curves were estimated by the Kaplan–Meier method and were compared by the log-rank test. Cox proportional hazard models were used to identify significant prognostic factors for PFS and OS. A P value < 0.05 was considered statistically significant.

Table 1. Molecular alterations of ccGlioma and non-ccGlioma of different WHO grades by univariate logistic regression. 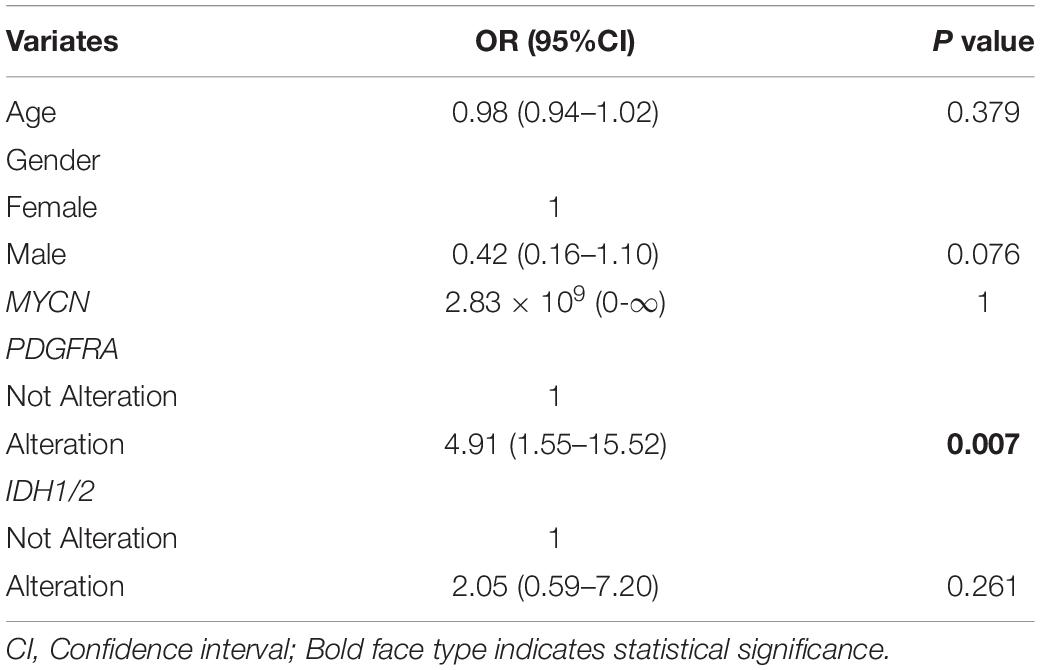 Association of PDGFRA Alterations With the Survival Rate of GBM Patients

Table 3. Baseline characteristics and survival of matched ccGBM and non-ccGBM.

Association Between PDGFRA Alterations and the Survival Rate of ccGBM Patients 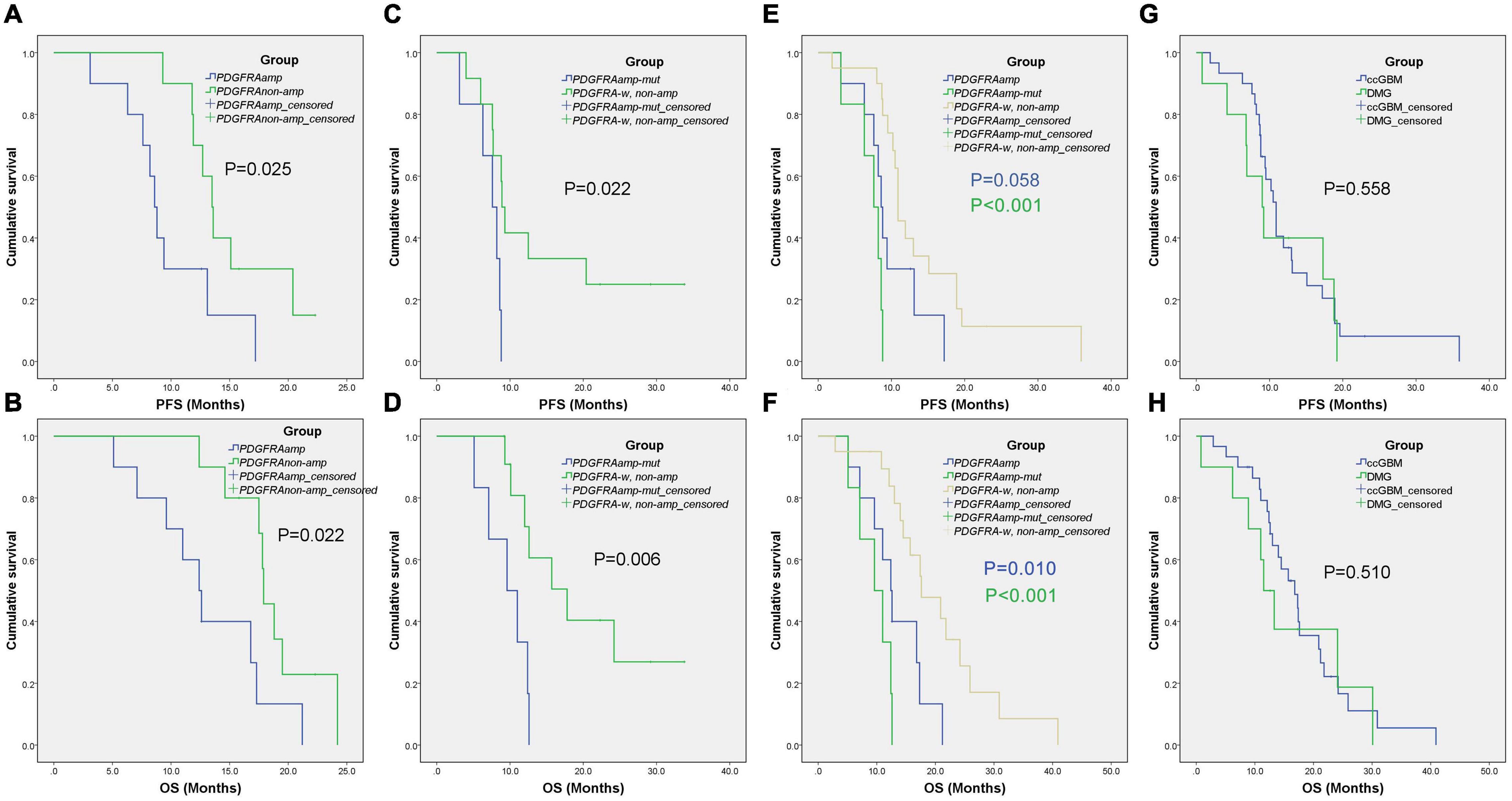 Table 5. Influence of PDGFRAamp on prognosis of ccGBM by multivariate cox regression.

Table 6. Influence of PDGFRAamp-mut on prognosis of ccGBM by multivariate cox regression.

Molecular alterations were compared between ccGBM and diffuse midline glioma (DMG). The results demonstrated that the incidences of PDGFRA alterations were not significantly different (33.3 vs. 70.0%, P = 0.097) between the two groups. The incidences of PDGFRAamp or mut (PDGFRAamp/mut) were also similar between groups (P > 0.05). The TERT mutation incidence of ccGBM was higher than that of DMG, while the ATRX mutation incidence of ccGBM was lower than that of DMG. The median PFS and OS rates were not significantly different between the two groups (Table 7 and Figure 3). 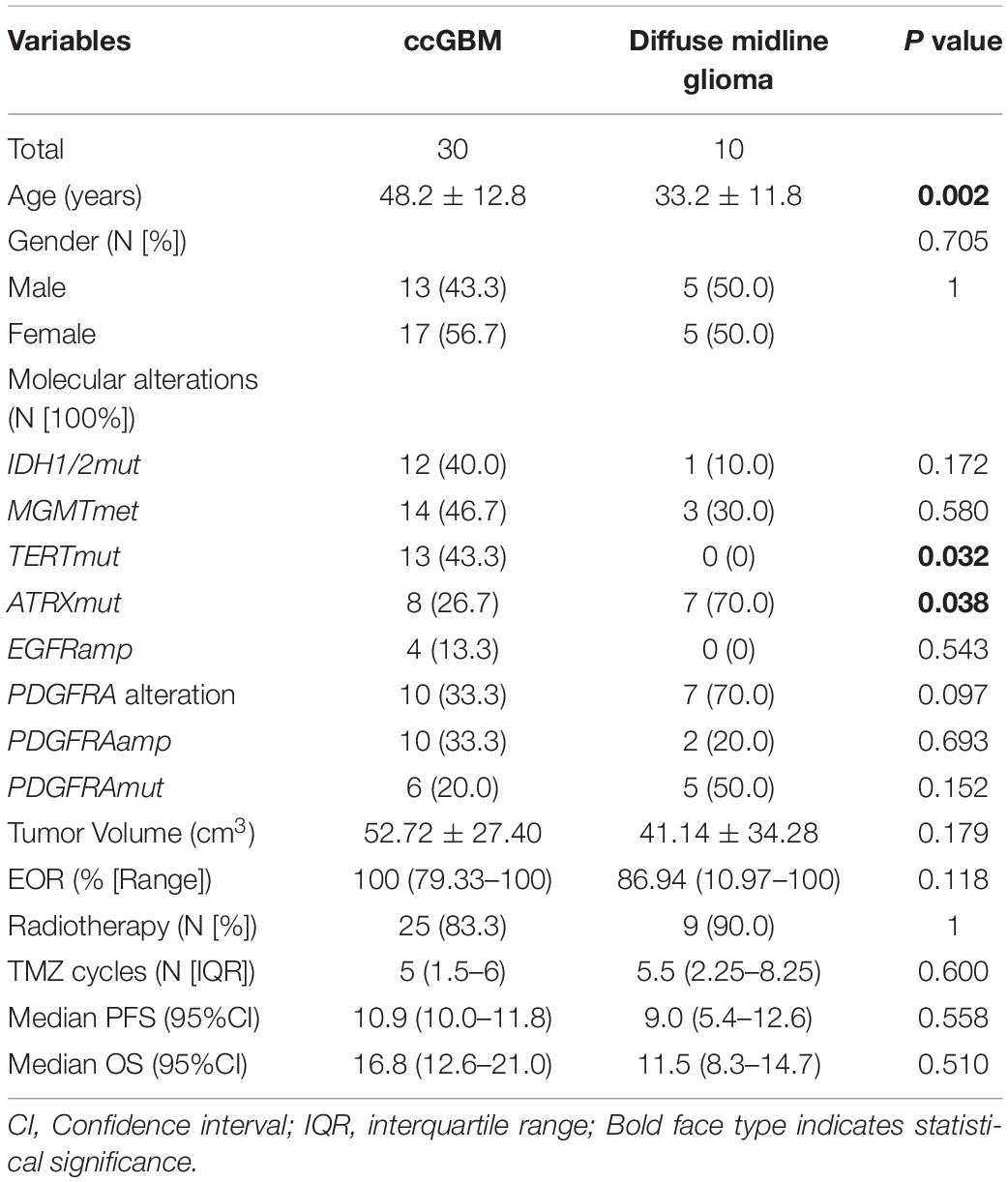 Table 7. Comparison of molecular alterations and survival between ccGBM and diffuse midline glioma. 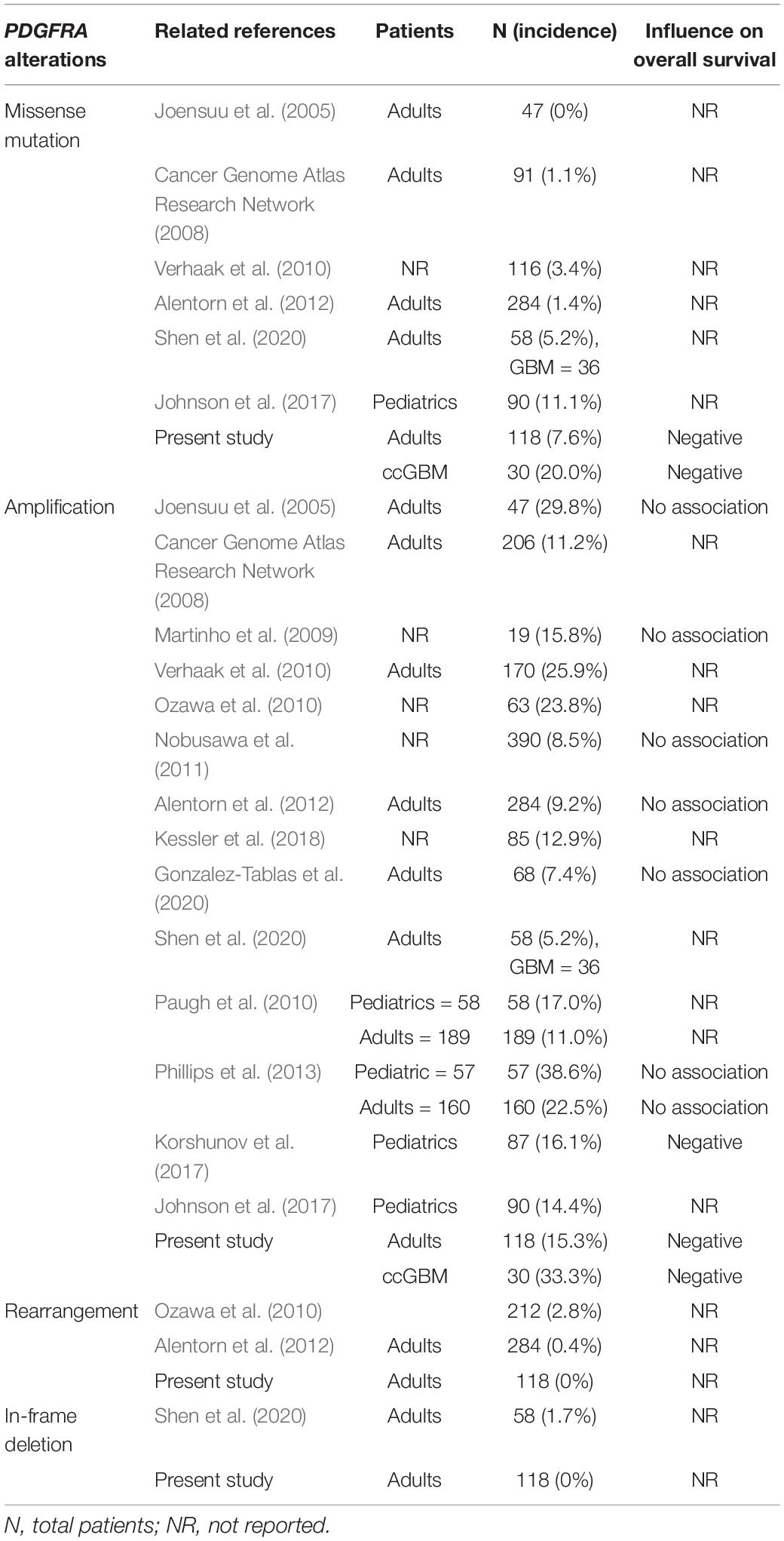 Table 8. Summary of studies on patients with GBM of PDGFRA alterations.

Diffuse midline glioma invading midline structures (thalamus, pons, and medulla oblongata, etc.) was identified to have a much higher incidence of PDGFRAamp/mut in previous studies [30.2% in Paugh et al. (2011), 21.3% in Castel et al. (2015) and 33.3% in Paugh et al. (2011) and Dono et al. (2020)]. As the largest interhemispheric fiber bundle, the corpus callosum is another midline structure that is often invaded by glioma. ccGlioma was also considered to have a higher incidence of PDGFRA alterations than non-ccGlioma in a previous study (Shen et al., 2020). Furthermore, ccGlioma was indicated to have a poorer prognosis than non-ccGlioma, and ccGBM had an even shorter median OS, ranging from 7.0 to 15.0 months after surgery (Dziurzynski et al., 2012; Chaichana et al., 2014; Chen et al., 2015; Burks et al., 2017; Dayani et al., 2018; Opoku-Darko et al., 2018; Forster et al., 2020; Franco et al., 2020). Therefore, we hypothesized that PDGFRA alterations may play an important role in GBM and lead to a higher incidence of CC invasion and a poorer prognosis.

Compared to the 10 patients with DMG, although the ccGBM had no statistical differences of PDGFRAamp/mut and total PDGFRA alteration incidences, because of the limited samples of DMG, we cannot conclude that they both had similar molecular characteristics of PDGFRA. But we can infer that the ccGBM group had a characteristic change in PDGFRA, which can predict the invasion of midline structures (such as the CC) and a poorer prognosis than that associated with common GBM. Castel et al. (2015) introduced a subtype of DMG with a K27M mutation in H3.3 (H3F3A) that had a prometastatic gene expression signature with PDGFRA activation and was also located in midline regions other than the pons. PDGFRAamp/mut was seen in this subtype of DMG but not in the H3.1 subtype with a HIST1H3B/C mutation. Along with PDGFRAamp/mut, H3.3 was a more common subgroup of DMG and had a poorer prognosis than H3.1 (Castel et al., 2015). In our series of DMG patients, all ten had H3.3 H3F3A mutations and had a high incidence of PDGFRAamp/mut. ccGBM had a similar incidence of PDGFRAamp/mut and survival rate to DMG. Therefore, it can be hypothesized that ccGBM with PDGFRAamp/mut is a subtype of GBM that has a poor prognosis similar to DMG with H3.3 mutations. Although PDGFRAamp and PDGFRAamp-mut both influenced the PFS and OS rate of ccGBM patients in the multivariate prognostic analysis, a higher EOR value and more TMZ cycles is indicative of an improved OS time in these patients. Radiotherapy was also found to improve the PFS (HR = 0.20 [95% CI: 0.07–0.60, P = 0.003]) and OS (HR = 0.15 [95% CI: 0.05–0.47], P = 0.001) rates of ccGBM patients in the univariate analysis but was not found to be associated with survival in the multivariate analysis. We hypothesize that this is because only five patients did not receive postoperative radiotherapy, which may have led to the underestimation of the effect of radiotherapy. Therefore, it is still suggested to perform aggressive resection and postoperative radiochemotherapy for patients with ccGBM with PDGFRAamp/mut.

PDGFRAamp/mut can cause overexpression of PDGFRα, thus promoting the proliferation and survival of tumor cells through the multiple signaling pathways mentioned above. PDGFR inhibitors are a promising drug to treat glioma. Several antitumor agents targeting PDGFR have been developed, such as imatinib, sorafenib, and nilotinib. These inhibitors have been shown to successfully inhibit GBM cells in vitro and in animal experiments (Ren et al., 2009; Ranza et al., 2010). Some clinical trials failed to prove the antitumor effects of PDGFR inhibitors in GBM, which may be due to the emergence of resistance (De Witt Hamer, 2010; Song et al., 2018). Because ccGBM was identified to have a higher incidence of PDGFRAamp/mut than non-ccGBM in this study, PDGFR inhibitors may be effective for patients with this specific type of GBM. Further clinical trials are needed to explore the effect of PDGFR inhibitors on ccGBM, especially ccGBM with PDGFRAamp/mut.

Some limitations existed in this study. First, not all patients underwent molecular tests, which may lead to selection bias. Second, the incidences of MYCN alterations were significantly different between ccGBM and non-ccGBM. However, because of the small sample size of patients with these alterations (only three patients), the association between MYCN alteration and the occurrence of ccGBM and patient survival rates could not be analyzed. Third, the limited samples of DMG made it difficult to conclude the similarity of molecular and survival between DMG and ccGBM. Last, further analysis of TCGA data for molecular alterations in ccGBM were needed to validate the findings of this study in our future work.

Platelet derived growth factor receptor alpha alterations are associated with the occurrence of ccGBM. The ccGBM with PDGFRAamp/mut group had a poorer prognosis than the non-ccGBM and ccGBM with PDGFRA-w, non-amp groups. ccGBM may have a similar incidence of PDGFRAamp/mut to DMG with an H3F3A mutation, and a similar survival rate. ccGBM with PDGFRAamp/mut can be classified as a single subtype of GBM that still benefits from gross total resection and radiochemotherapy. PDGFR inhibitors may be a promising treatment method for this type of GBM. Large-sample studies are needed to clarify the molecular mechanisms of ccGMB and potential treatment strategies.

The original contributions presented in the study are publicly available. This data can be found here: https://datadryad.org/stash/landing/show?id=doi%3A10.5061%2Fdryad.7d7wm37v8.

The studies involving human participants were reviewed and approved by Ethics committee of Chinese PLA General Hospital. The patients/participants provided their written informed consent to participate in this study.

YC was employed by the company Xian Janssen Pharmaceutical Ltd.

We would like to thank Genetron Health who provided the next-generation sequencing platform. We thank to the members of the Department of Neurosurgery, the First Medical Centre of Chinese PLA General Hospital (Guochen Sun, MD; Jialin Liu, MD) for their collaboration.

Copyright © 2021 Cui, Gao, Chi, Zhang, Lin, Chen, Sun and Ma. This is an open-access article distributed under the terms of the Creative Commons Attribution License (CC BY). The use, distribution or reproduction in other forums is permitted, provided the original author(s) and the copyright owner(s) are credited and that the original publication in this journal is cited, in accordance with accepted academic practice. No use, distribution or reproduction is permitted which does not comply with these terms.