Objective: To explore the characteristics of mechanical ventilation parameters and the arterial partial pressure of oxygen in neonatal respiratory distress syndrome (RDS) at high altitude.

Methods: From the 1st May 2017 to the 31st December 2018, we recruited 33 neonates with severe RDS who were undergoing mechanical ventilation in the NICU of Naqu People's Hospital in Tibet (4,580 m above sea level); these neonates formed a plateau observation group. We also recruited a non-plateau control group: 66 neonates with severe RDS undergoing mechanical ventilation of Shengjing Hospital in Liaoning (51 m above sea level). Various ventilation parameters and the arterial partial pressure of oxygen were then compared between the two groups, between the survivors of the two groups, and between those who died and survived in the plateau group.

Approximately 140 million people around the world, who live at an altitude higher than 2,438 meters, are at high risk of hypoxia (1). Tibet, with a mean altitude of 4,000 meters, is the highest geographical region in China and Asia. In Tibet, the atmospheric pressure, measured at 3,600 meters above sea level, is <500 mmHg, while the partial pressure of oxygen during inhalation is ~100 mmHg (2). Some previous studies have suggested that with increasing altitude, the partial pressure of inhaled oxygen also decreases, and that this leads to an increased incidence of neonatal mortality and intrauterine growth restriction (3–6). In one previous study, Moore et al. found that the mortality rate of newborns with neonatal respiratory distress syndrome (RDS) was negatively correlated with altitude (7). One possible factor for this is that air pollution is a problem in low altitude areas (8, 9). RDS is a common problem in newborns, particularly in premature infants. Thus far, only a few studies have investigated RDS in high altitude areas (7, 10–12). Most of these previous studies have suggested that the incidence of RDS is independent of altitude, although the use of pulmonarysurfactant (PS) is greater in high altitude areas (10, 12). The mean altitude of the Naqu area in Tibet is 4,500 meters, the atmospheric pressure and oxygen content in this area is half that of low altitude plains. From May 2017, medical institutions in the Naqu area began using mechanical ventilation, the mortality rate of infants with severe symptoms decreased significantly. However, some neonates, particularly those with RDS, died due to failure of treatment. Until now, there is no published studies which have observed and evaluated the use of mechanical ventilation in neonates with RDS in high altitude areas. The present study aimed to explore the characteristics of mechanical ventilation conditions and the arterial partial pressure of oxygen in high altitude areas by analyzing neonates with severe RDS undergoing mechanical ventilation in the Naqu area of Tibet.

Our exclusion criteria were as follows: (1) Neonates with congenital malformations or hereditary metabolic diseases and (2) Newborns with severe asphyxia, infection or other diseases that may cause death.

For each subject, ~1 ml of radial artery blood was collected within 30 min (immediately after mechanical ventilation and prior to the use of PS), 1, 6, and 12 h after birth. The partial pressure of carbon dioxide and oxygen in the arterial blood was measured using a blood gas analyzer.

A range of clinical data were recorded, including gestational age, gender, birth weight, ethnicity, 1 and 5 min Apgar scores, the application of PS; the arterial partial pressure of carbon dioxide and the arterial partial pressure of oxygen within 30 min, 1, 6, and 12 h after birth; positive end-inspiratory pressure (PIP), positive end-expiratory pressure (PEEP), and the fraction of inspired oxygen (FiO2) prior to the use of PS; duration of mechanical ventilation and outcome.

The plateau group featured 33 Tibetan neonates with RDS; 18 of these used porcine PS (240 mg regardless of weight) within 5 to 12 h of birth and 17 subjects died. There were 66 neonates in the non-plateau group, all were of Han nationality; 65 of the neonates used porcine PS (200 mg/kg) within 1 h of birth and one subject died. Respiratory failure was the cause of death in both groups. 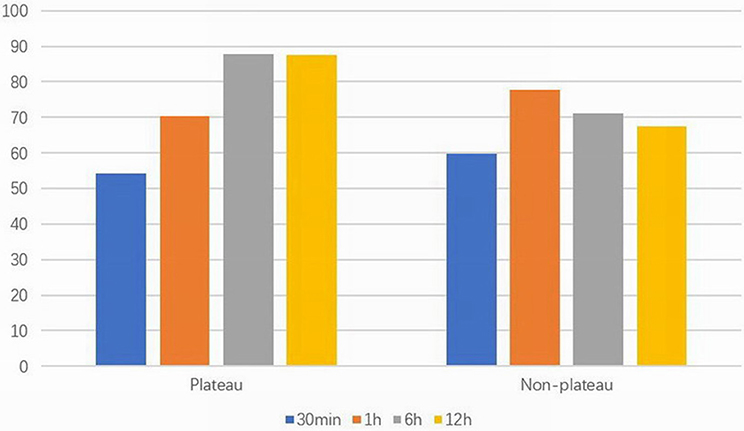 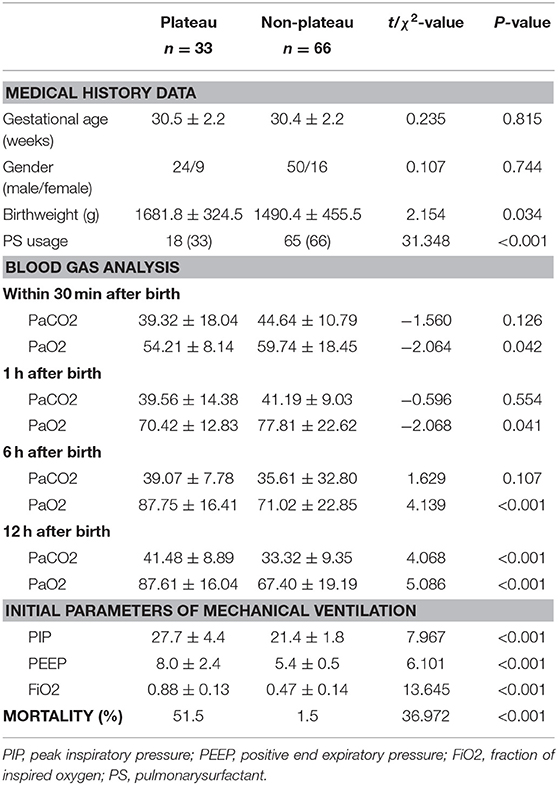 Table 1. Comparison of clinical data between neonates with RDS at plateau group and non-plateau group.

The initial PIP and FiO2 in the plateau group were significantly higher than those in the non-plateau group (P < 0.01), although there were no significant statistical differences in the initial PEEP setting or mechanical ventilation time between the two groups. Please refer to Figure 2 and Table 2. 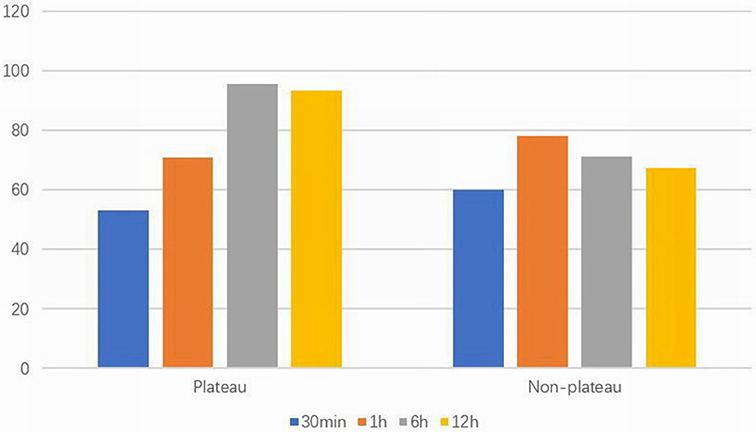 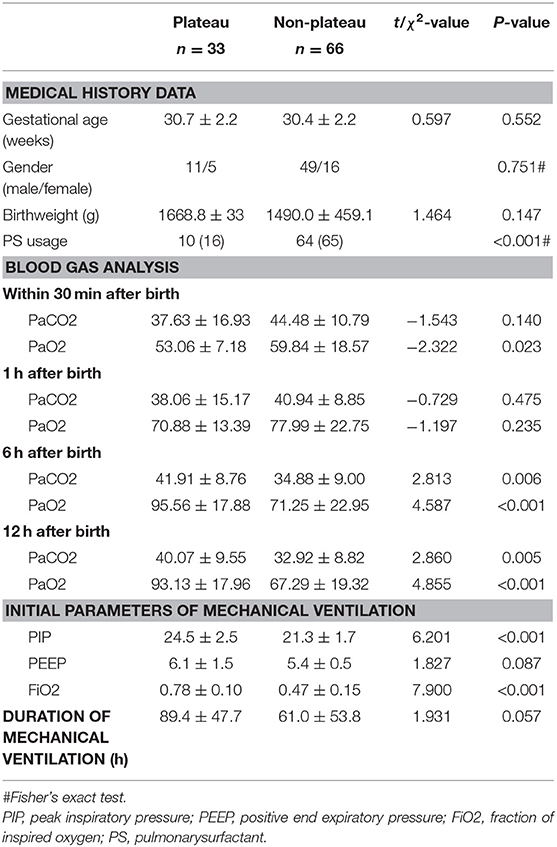 Table 2. A comparison of clinical data in surviving RDS neonates between plateau group and non-plateau group.

In the plateau group, there were no significant differences in terms of gestational age, sex, birth weight, cesarean section rate, Apgar score, and PS usage when compared between the neonates with RDS who died and those that survived. The partial pressure of arterial oxygen at 6 and 12 h in the group of neonates that died was significantly lower than that in the survival group (P < 0.05). The partial pressure of carbon dioxide at 6 h after birth was also significantly lower in the neonates that died compared to that in the surviving neonates (P < 0.05). Furthermore, the initial parameters of mechanical ventilation (PIP, PEEP, and FiO2) were also significantly higher in the group of neonates that died (P < 0.01). Please refer to Figure 3 and Table 3. 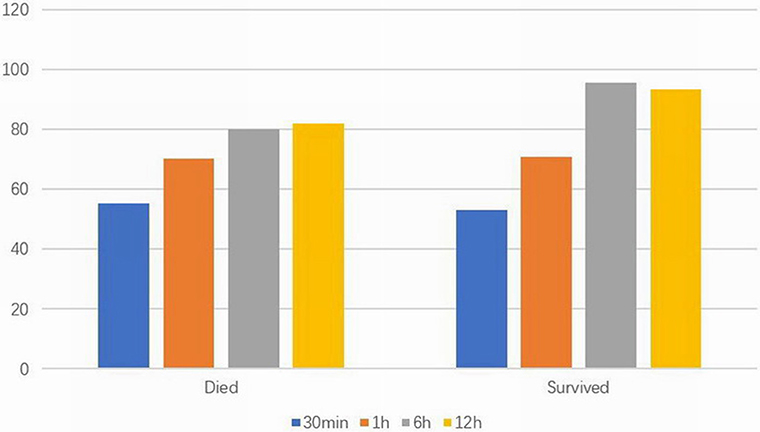 Table 3. A comparison of clinical data in neonates with RDS at high altitude between those that survived and those that died.

Our current data showed that the arterial partial pressure of oxygen during the early postnatal period of neonates with RDS requiring mechanical ventilation was significantly lower in the plateau area, the initial pressure and oxygen concentration settings were significantly higher than in the non-plateau area, and the mortality rate was also significantly higher than in the non-plateau area. The utilization rate of PS in the plateau area was low but did not have any effect upon the mortality rate of neonates with RDS; we suggest that this is related to an insufficient dosage and delayed intervention. 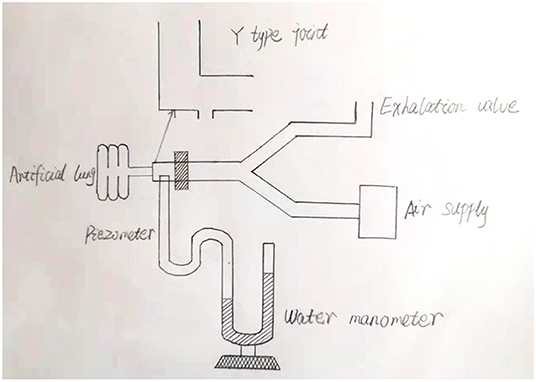 Sub-group analysis showed that the use of PS in the group of newborns surviving in the plateau group was lower than that in the non-plateau group and that the changes of arterial oxygen partial pressure after birth were consistent with those mentioned above. Ventilation in the plateau group required more intensive pressure support and a higher inhaled oxygen concentration. Although there was no significant statistical difference, the duration of mechanical ventilation in the plateau group was longer, this was related to the application of PS and standard ventilator application. When comparing the newborns who survived and those who died in the plateau group, we found that there were no significant differences in terms of gestational age, weight, and PS usage between the two groups, indicating that the use of PS did not reduce the mortality rate for RDS cases; this may have been related to inadequate dosage and an unsatisfactory duration of PS treatment. Postnatal ventilator parameters were significantly higher in the group of RDS patients who died than those who survived. Furthermore, the arterial partial oxygen pressure at 6 and 12 h was lower in those that died when compared to those who survived; this may be related to the greater severity of lung lesions in those that died.

Although the development of mechanical ventilation has greatly reduced the mortality rate associated with neonatal RDS in the Naqu area, our results showed that the mortality rate of cases with severe RDS was still significantly higher than that in the non-plateau area (P < 0.01). Generally, once RDS is diagnosed, the earlier PS is used, the better the prognosis (18). If the dose of the first PS administration is 200 mg/kg, then the second dose can be reduced (19). However, the economy of the plateau area is poor and many newborns are not given PS. There are also issues with insufficient dosage and delayed application. Consequently, it is very important to strengthen the use of PS in plateau areas.

There are some limitations to this study which need to be considered. Firstly, there were fewer cases in the plateau group, consequently, there may have been some bias in terms of the statistical analysis. Secondly, the mode of ventilation was relatively fixed. It was therefore not possible to judge the potential significance of different ventilation modes when applied to RDS neonates at high altitude. Most RDS neonates in plain area had changed to non-invasive ventilation mode within 6–12 h, but in Naqu area, the invasive ventilation time was longer. The two groups only compared the parameters of ventilator at birth, and no comparative study was made on the later parameters. Finally, without BPD identification and retinopathy of premature infants(ROP) examination, it was not possible to evaluate secondary damage to the lung and retina caused by the inhalation of hyperbaric oxygen.

To conclude, our study showed that mechanical ventilation can effectively improve the arterial oxygen partial pressure of newborns with RDS in plateau areas and can reduce the mortality rate associated with this condition. Further research should now be conducted to identify appropriate settings for ventilator parameters and ventilation mode. This will allow us to formulate appropriate guidelines for the mechanical ventilation of newborns with RDS in plateau areas. Creating such guidelines is critical if we are to reduce the neonatal mortality rate in Tibet and improve the mean life expectancy of residents in this area.

The studies involving human participants were reviewed and approved by Shengjing Hospital of China Medical University Ethics Committee (Shenyang, China). The study does not contain patient's personal information, fully protects the patient's privacy, has no effect on the routine diagnosis and treatment of patients, patients do not participate in the study for additional tests or examinations. Written informed consent from the participants' legal guardian/next of kin was not required to participate in this study in accordance with the national legislation and the institutional requirements.

Copyright © 2019 Chen, Liu and Li. This is an open-access article distributed under the terms of the Creative Commons Attribution License (CC BY). The use, distribution or reproduction in other forums is permitted, provided the original author(s) and the copyright owner(s) are credited and that the original publication in this journal is cited, in accordance with accepted academic practice. No use, distribution or reproduction is permitted which does not comply with these terms.