Introduction: An acute diabetic foot infection (DFI) is a serious condition and a leading cause of hospitalization and major amputation in patients with diabetes. Aim of this study was to evaluate the long term survival and risk factors for death and amputation after the DFI requiring hospital treatment.

Conclusion: Mortality after a DFI remains high and is significantly increased after a major amputation. Findings highlight the importance of early wound and ischemia management for DFI prevention.

The burden of diabetes and its complications is an increasing problem worldwide. The prevalence of diabetes is likely to grow in coming years, which will lead to increases in deaths and healthcare costs (1). A patient with diabetes is at major risk of developing a foot ulceration, which can lead to infections, extensive hospitalizations, lower-extremity amputations, and even death. It is important to keep up to date on knowledge of factors that can predict mortality and morbidity to meet this global challenge.

The 5-year overall survival of patients with diabetic foot ulcers (DFUs) is 70%, and after a major amputation, it declines to only 43% (2). The most important risk factors for mortality in patients with DFUs are age, ischemia, impaired renal function, and male sex (3–5). Infection is a major complication of DFUs, and long-term survival of these patients remains unknown. Few studies have focused on patients with acute diabetic foot infections (DFIs). A recent study showed that patients with DFIs had 15% mortality at 1 year, and 17% of patients underwent lower extremity amputations (6). In another study, patients with infectious gangrene had 40% survival over 5 years (7). DFIs also have a profoundly negative impact on patient quality of life (8).

A major amputation is a feared consequence of complicated diabetes; it is associated with severe physical impairment (9). Lower extremity amputations, due to diabetic foot complications, were identified as an independent risk factor of premature death (2). Therefore, next to overall survival (OS), amputation-free survival (AFS; that is, survival without amputations above the ankle) is an important outcome for patients with DFI.

The Laboratory Risk Indicator for Necrotizing Fasciitis score (LRINEC score) is a diagnostic scoring system that was developed to distinguish necrotizing fasciitis from other soft tissue infections (10). Originally, the LRINEC cutoff score for identifying necrotizing fasciitis was defined as 6; however, a more recent study indicated that a LRINEC score of 8 or higher was more sensitive for patients with diabetes (11). We investigated whether the LRINEC score could be used as an indicator of severe DFI and a poor prognosis.

The primary aim of this study was to investigate the long-term survival and risk factors for OS and AFS in patients with DFI that required inpatient treatment in a tertiary university hospital.

This retrospective cohort study was conducted at Tampere University Hospital (Institutional Review Board approval ETL-code: R14545S). All adult patients hospitalized with an acute DFI during 2010–2014 were included in the study. This population and patient selection process was described in an earlier study in detail (12). Compared to the previous study cohort, we excluded one patient that was under 18 years of age.

From the hospital records, we collected data on patient demographics (age and gender), registered diagnoses (ischemic heart disease, chronic obstructive pulmonary disease, congestive heart failure and dyslipidemia), microbiological and clinical chemistry findings, surgical revisions and amputations, open and endovascular revascularization procedures, and the length of hospital stay. Wound status was assessed from the patient records, and wounds were staged according to the University of Texas Staging System for Diabetic Foot Ulcers (UT scale) by a specialized plastic surgeon (13). For the analysis, wounds were classified separately, based on wound perfusion (ischemic vs. non-ischemic) and wound depth (1: superficial, 2: penetrating tendon or capsule, 3: penetrating joint or bone). We calculated the LRINEC score from the first laboratory results after admission, and we chose a cutoff score of 8 or higher to identify necrotizing fasciitis. The interval from admission to surgery was defined as the number of days from admission to a first surgical revision. The glomerular filtration rate (GFR) was calculated with the Modification of Diet in Renal Disease equation (14). Hypertension was defined as the use of antihypertensive medication.

The mean and standard deviation (SD) were calculated for normally distributed continuous variables. The median and interquartile range (IQR) were calculated for continuous variables with skewed distributions. We performed a Cox regression analysis to evaluate the significance of associations of different variables with OS and AFS. In the AFS analysis, the endpoint was defined as death or a major amputation (above the ankle), and in the OS analysis, the endpoint was death. AFS analysis was limited to 2 years following hospitalization, since most patients had censored out after this time. Time of follow up was considered to end in last visit to hospital. However, OS was reliably analyzed during 5 years, since the data of death dates was obtained from national registry. All variables were first analyzed individually with Cox regression. For the Cox regression, we included the GFR, hemoglobin A1c (HbA1c), C-reactive protein (CRP), and leukocyte levels as continuous variables without thresholds. Then, all variables that were individually significantly associated with survival were included into a multivariable Cox regression analysis. For variables that showed a significant association with survival in the multivariable analysis, we performed Kaplan-Meier analyses and reviewed survival tables. For these analyses, age and GFR were divided into two groups. For age, the median (67.0 years) was used as a cutoff value. For GFR, a value of 60.0 ml/min was chosen as a cutoff value, because this value served as the threshold between mild and moderate kidney disease; in addition, it was close to the median (58.6 ml/min). Statistical analyses were planned and reviewed with a professional statistician. All analyses were performed with SPSS software (IBM SPSS Statistics, Version 24.0. Armonk, NY).

We enrolled 324 patients (237 males, 87 females; mean age, 66.8 years, SD 12.8) with 404 periods of hospitalization. Their comorbidities, wound characteristics, and bacterial findings are presented in Table 1. A case was defined as a period of hospitalization. 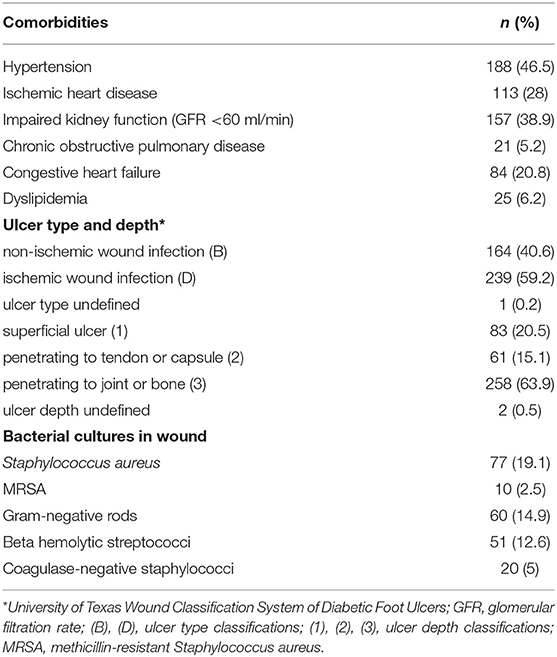 Table 2. Distribution of laboratory test results among the cases. 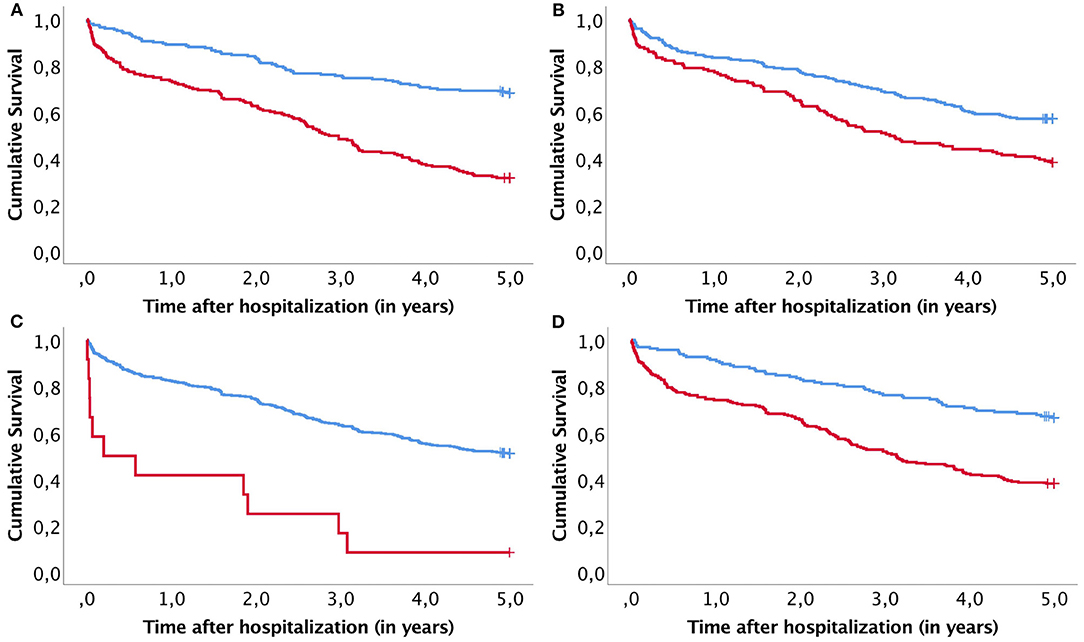 The univariate Cox regression analysis identified six factors that significantly reduced the OS: a major amputation, wound ischemia, revascularization procedure within a month of admission, ischemic heart disease, congestive heart failure and age. In contrast, male gender, a high GFR, and a low HbA1c increased the OS (Supplementary Table 1). The multivariable model showed that a major amputation, wound ischemia, age, and GFR remained significant factors (Table 3). A univariate analysis showed that AFS was reduced in patients with wound ischemia, deep wounds (to the bone or joint), age, high leukocyte counts, and high CRP levels. In contrast, AFS was increased in patients that used hypertension medications (Supplementary Table 1). The multivariable analysis showed that wound ischemia, age, CRP, and hypertension medication use retained significance (Table 4). Neither the OS nor the AFS was significantly affected by bacterial culture findings, interval from admission to surgery, or the LRINEC-score. 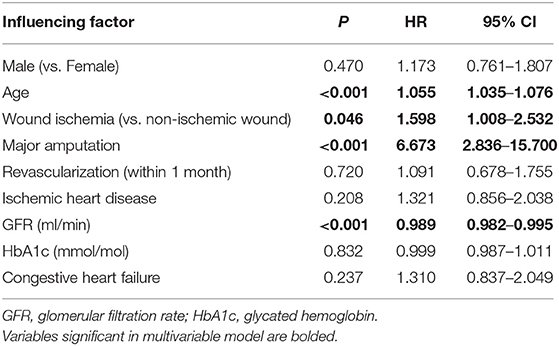 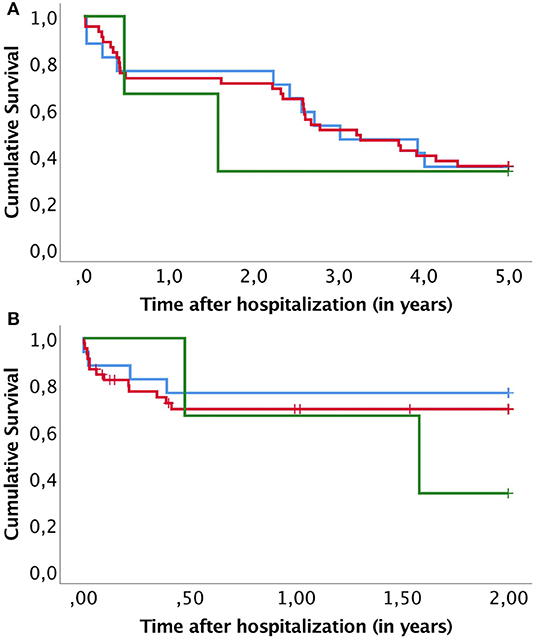 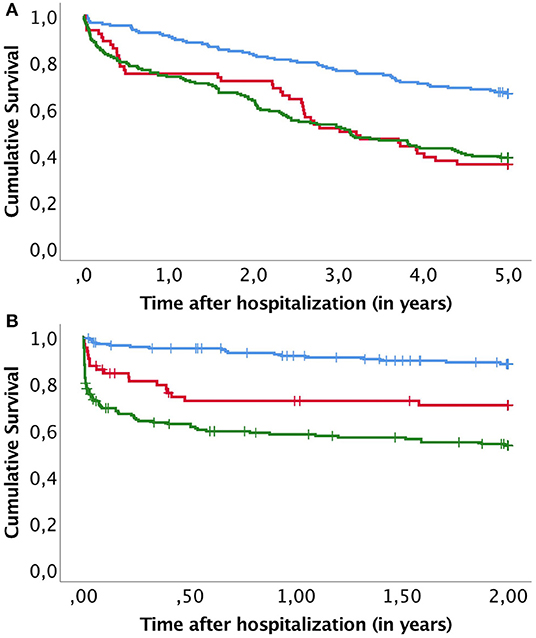 This study showed that survival after a DFI was poor, even in a tertiary university hospital setting with advanced treatment resources. Age, wound ischemia, major amputations, and impaired kidney function were the most important predictors of a reduced OS. Moreover, age, wound ischemia, and high CRP were associated with a reduced AFS; however, use of a hypertensive medication seemed to increase the AFS.

The one-year OS after hospitalization due to a DFI was 81.2%. This result was similar to that found in a recent prospective multi-center study in England, where 15% mortality was observed during the first year after a DFI (6). Diabetes is estimated to be related to 31.4% of deaths in Europe (1). In our study, half of the patients died within 5 years after a DFI. This finding highlighted the serious nature of a DFI. For comparison, the 5-year mortality after a DFI was larger than the mortality after an ST-elevation myocardial infarction without any reperfusion (41%) and similar to mortality after a stroke (48%) or among patients undergoing hemodialysis (51%) (15–17).

In our cohort, a higher CRP (indicating a more severe infection) was also associated with a worse AFS. In the univariate analysis, we found that the AFS was also associated with a deep wound (penetrating to the bone or joint) and high blood leukocytes. However, these factors lost significance in the multivariable analysis. A deep wound often develops over a long time, and it can go unnoticed with lack of proper foot care and diabetic neuropathy. Long-lasting and multiple foot ulcers were associated with a worse outcome (6). This observation highlighted the importance of detecting the infection early and providing sufficient interventions in treating diabetic foot ulcers.

Our results showed that use of a hypertensive medication was associated with an increased AFS. Hypertension has been identified as a risk factor for major amputations among patients with diabetes (20). However, previous studies have shown that hypertension did not impact major amputation rates (21). In our study, we lacked data on blood pressure; therefore, we could only analyze the association between the use of hypertensive medication and AFS. Although our finding is interesting, it requires more targeted research for adequate interpretation.

The major strengths of this study were the inclusion of all hospitalized DFI cases in our area and the long-term follow-up. The retrospective nature of the study was an inevitable limitation. Our data did not include features as ankle-brachial index or clinical severity of infection, which are included in most recent scales. Nevertheless, we could classify all but two wounds retrospectively using the UT scale. Other study limitations included the fact that complete data on covariates were not available for all cases and there may be some inconsistency in registered diagnosis of co-morbidities. Moreover, the population of this study comprised only hospitalized patients in a tertiary care hospital, although DFIs are also treated in primary and secondary hospitals and in outpatient care. On the other hand, this might also be viewed as a study strength, because we focused on the most severe DFIs.

In conclusion, patients with DFIs comprise a group associated with high mortality and morbidity. A major amputation often precedes death; therefore, treatments should aim to improve both the AFS and OS. Ischemic infections in deep wounds, combined with a high CRP level is the worst case scenario for a DFI; hence preventing this scenario merits robust action.

This work was funded by Competitive State Research Financing of the Expert Responsibility area of the Tampere University Hospital, Grant 9R025 and 9S025.

The Supplementary Material for this article can be found online at: https://www.frontiersin.org/articles/10.3389/fsurg.2021.655902/full#supplementary-material

Konstantinos A. Filis, National and Kapodistrian University of Athens, Greece

Copyright © 2021 Vuorlaakso, Kiiski, Salonen, Karppelin, Helminen and Kaartinen. This is an open-access article distributed under the terms of the Creative Commons Attribution License (CC BY). The use, distribution or reproduction in other forums is permitted, provided the original author(s) and the copyright owner(s) are credited and that the original publication in this journal is cited, in accordance with accepted academic practice. No use, distribution or reproduction is permitted which does not comply with these terms.