Aim: Vesicovaginal fistula (VVF) is the most common urogenital acquired fistula, and has remained a scourge and of public health importance. VVF can be repaired by transvaginal approach, transabdominal approach or transvesical approach, but the optimal management is still debated.

Methods: To demonstrate a suprapubic transvesical approach to repair VVFs using a homemade laparoscopic single-port device. A retrospective review of the medical records of 42 consecutive patients who underwent fistula repair for VVF at our center from January 2012 to March 2018 was performed. VVFs were repaired by a suprapubic transvesical approach using a homemade laparoscopic single-port device. Clinical data, perioperative data and outcomes were collected. The primary outcome was VVF successful closure rate, and secondary outcome was perioperative complications.

Results: The mean age of the patients was 44.6 (27–58) yr. The mean follow-up time was 65.6 (32–118) mo. The VVFs were successfully closed in 37 (88.1%) patients after the first surgery, and failure was observed in five patients. Initial failures of all the five patients were cured after a second repair. No major complication occurred as defined by Clavien-Dindo class 2 or greater.

Urogenital fistula is a global healthcare problem, predominantly associated with obstetric complications in low-resourced countries and iatrogenic injury in well-resourced countries, and vesicovaginal fistula (VVF) is the most common urogenital acquired fistula (1). In developed countries, most VVFs occur after benign gynecological surgery, and hysterectomy for benign vaginal diseases is the most common cause with an incidence ranges from 0.22 to 0.66% (2, 3). In developing countries, most VVFs are associated with labor and delivery (4, 5).

This is a cross-sectional and observational study performed in a high-volume referral center hospital. A total of 42 patients were diagnosed with VVFs after gynecological surgeries between January 2012 and March 2019, who underwent fistula repair by a suprapubic transvesical approach using a homemade single-port device in our department. All surgeries were performed at least 3 months after fistula onset. This study was approved by the Institutional Review Board of our hospital, and informed written consent was obtained from all patients.

Two stretchable rubber rings, one 4 cm and another 6 cm in diameter, and a surgical glove were used to construct the homemade multichannel single-port (Figure 1A). Two or three fingers of the glove were cut, and one 10 mm metal trocar and another valve compartment of 12 mm trocar were secured with the fingers. The thumb and the little finger were recommended position of the two instrument ports, and sometimes position adjustment might be required according to the position of the fistula. A 15-degree rigid laparoscope (Olympus Surgical, Orangeburg, NY) was inserted through the 10 mm trocar, and the conventional laparoscopic instruments were inserted through another trocar. The 6 cm ring was attached to the cuff of the glove to act as an outer ring. The 4 cm ring was set at 5–6 cm (depending on the thickness of the abdominal wall) from the cuff of the glove and was slipped through the outer ring to form an inner ring. Rubber between the two rings was tightened to prevent CO2 leakage (Figure 1B). 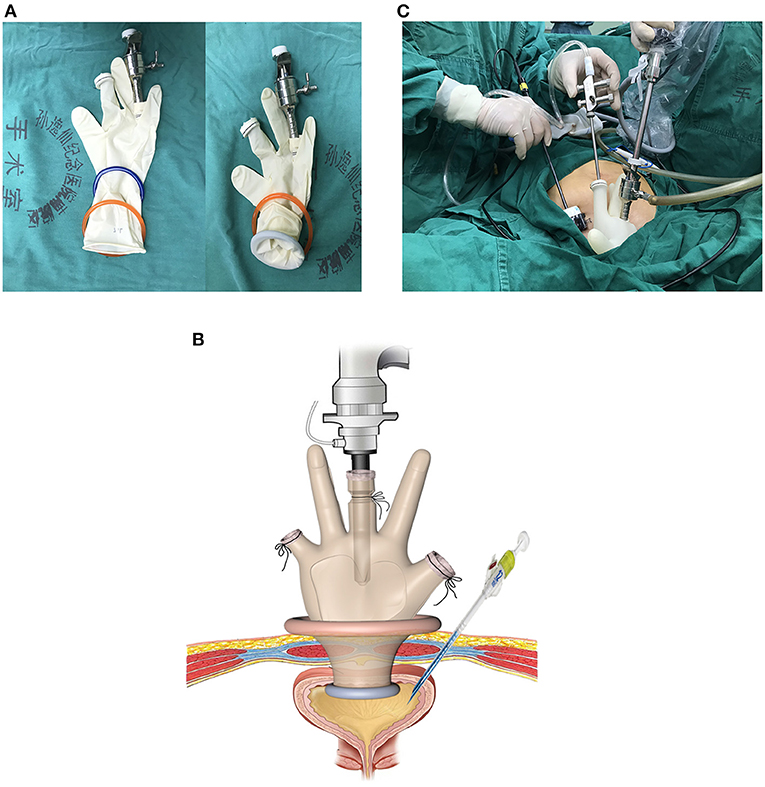 Figure 1. Construction and placement of homemade single-port multi-channel access platform. (A) Two stretchable rubber rings and a surgical glove were used to construct the homemade multichannel single-port. (B,C) The inner ring was inserted through into the bladder cavity. The outer ring was kept outside the incision. At about 4 cm right lateral to the incision, a 5-mm assistant trocar was placed.

After general anesthesia, the patients were placed in a Lithotomy position with the feet elevated about 15-degree. A urinary catheter was placed preoperatively, bladder irrigation and vaginal douching was performed. A 4-cm transverse incision was made above the upper edge of pubic symphysis. Next, each layer of the abdominal wall was dissected until the bladder was reached. Then, the bladder was mobilized and incised open longitudinally. The inner ring of the multichannel port was inserted through the incision into the bladder cavity. The outer ring was kept outside the incision. Pneumoperitoneum was obtained by insufflation of CO2 to 15 mmHg. The laparoscope was inserted through the access into bladder cavity. At about 4 cm right lateral to the incision, a 5-mm assistant trocar was placed into the bladder under direct laparoscopic vision (Figures 1B,C). 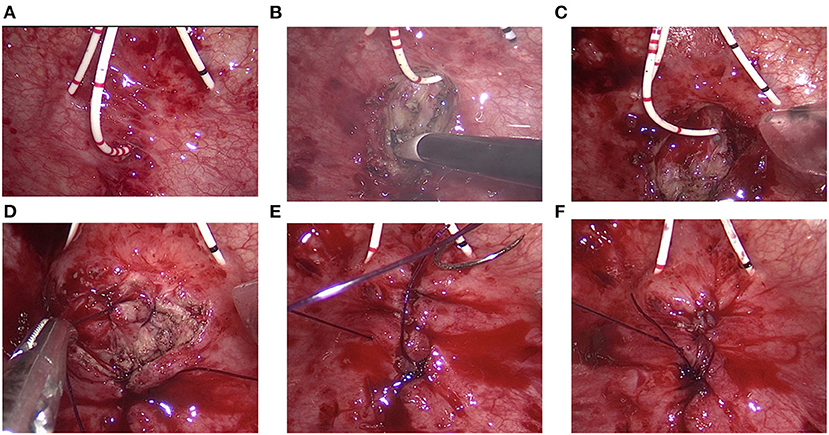 Figure 2. Transvesical repair of vesicovaginal fistula. (A) Bilateral ureteral catheters were placed. Another ureteral catheter was inserted into the fistula tract. (B) The scar tissue was resected using a coagulation hook. (C) The bladder wall was widely mobilized off the vaginal wall. (D–F) The vaginal wall, bladder wall, and bladder mucosa were successively closed with 2-0 Monocryl suture.

Patients are discharged from the hospital within 5–7 days, antibiotics are prescribed for 14 days, antimuscarinics such as Solinasin or Tolterodine are given to the patients for 4 weeks, and Foley catheter drainage is maintained for 2 weeks. All patients underwent a regularly follow-up in accordance with relevant guidelines and regulations. Symptom assessment and physical examination was performed at every visit. Cystovaginoscopy was performed if patient still complained of urine leakage. Complications of the procedure were assessed according to the patients' medical records and form the direct description of patients during follow-up. The complications were classified according to the Clavien-Dindo classification (8, 9).

The characteristics of patients and fistulas are shown in Table 1. A total of 42 patients diagnosed with VVFs underwent fistula repair in our department, with a mean age of 44.6 (range: 27–58) yr. Among these 42 patients, 33 were primary VVF patients (no prior treatment), whereas nine were recurrent VVF patients (one to two attempts of repair by transvaginal approach at gynecology department). The mean fistula size was 0.9 ± 0.5 cm. The most common location of VVFs was the supratrigonal posterior bladder wall (29 cases, 69.0%). Among the patients, 37 had a single fistula, and five had two or more fistulas. 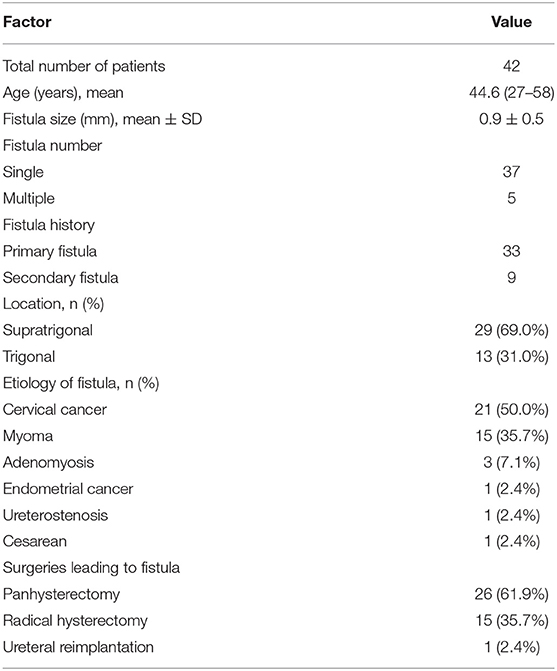 The mean operative time was 41.3 ± 12.9 min. Suprapubic transvesical repair were successfully completed in 41 patients. One patient was converted to transabdominal approach due to two large fistulas, as the pneumoperitoneum could not be sustained. The procedure was defined as success if the patient had no urine leakage during the follow-up period. The mean follow-up time was 65.6 (32–118) mo. The VVFs were successfully closed in 37 (88.1%) patients after the first surgery, and failure was observed in five patients. Reasons of failure including three patients had a pelvic radiation therapy history, and two patients had a large fistula (>2 cm). Initial failures of all the five patients were cured after a second repair. No major complication occurred as defined by Clavien-Dindo class 2 or greater. There was also no bowel, ureteral, or nerve injury. Minor complications according to Clavien-Dindo class 1 were shown in Table 2. Common minor complications included bladder spasm (3, 7.1%) and urinary tract infections (5, 11.9%). Incision infection occurred in an obese patient (BMI:28.6) due to fat liquefaction. 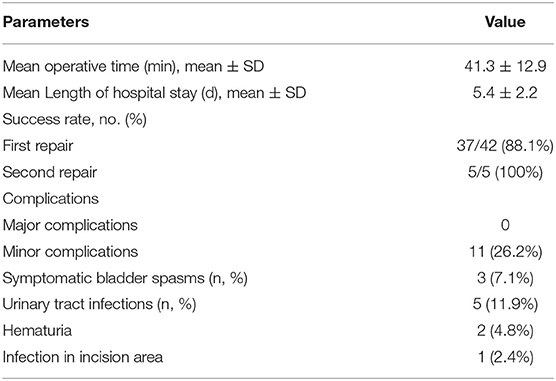 VVF is the most frequently acquired fistula, and has remained a scourge and of public health importance, not just for the attendant medical and physical disabilities, but also for the inherent social, emotional and psychological strain, and stress on the victims (5).

Any surgical procedure in the pelvis can lead to fistulae formation. A patient might be suspected to have a VVF when she has urine leak 1–2 week postoperatively. VVF is often because of tissue necrosis captured in surgery or due to cautery. It must be emphasized that VVFs are not necessarily a consequence of inadvertent organ injury or surgical misadventure. Tissue necrosis may occur because of extensive dissection or haematoma formation with fistulae forming weeks later. VVFs that result following radiation therapy may present many months to years later and are thought to occur due to chronic small vessel inflammatory changes leading to tissue ischaemia (1). Diagnosis can be established by filling the bladder with methylene blue, inserting a tampon in the vagina and asking the patient to ambulate (2). Cystoscopy and vaginoscopy have prime importance to check the location, size, number of fistulas, and evaluate the surrounding tissue, which helps in the future management plan. Surgery should be postponed if there are signs of acute inflammation, edema, necrosis, or other pathology of the vagina or bladder. If there is a suspicion of concomitant ureteral injury, CTU or MRU is recommended. In long-standing patients of VVFs, or repeated recurrent VVFs, bladder capacity can be reduced, and this might change the management plans.

VVFs can be best managed following principles, such as adequate exposure, identification of structures, wide mobilization, tension-free closure, good hemostasis and uninterrupted bladder drainage (5). The choice of surgical procedures depends on the surgeon's experience, location and size of the fistula, and patients' preferences. Most gynecologists prefer the vaginal approach, which has the benefits of minimal blood loss, shorter hospital stay and relatively less postoperative morbidity, a higher success rate, and has little affect to secondary surgery if the first surgery failed comparable with the abdominal approach (10–12). However, the vaginal approach also has some limitations, as it is difficult to perform when there is vaginal stenosis, improper exposure or synchronous ureteric involvement. In addition, the risk of ureter injury increase if the fistula is close to the ureteral orifice. Many urologists choose the transabdominal or transvesicle approach due to a lack of familiarity with the vaginal repair.

The important surgical principles are included in the article to demonstrate the successful closure of a VVF and the good functional results. During this approach, there is no need to interfere the abdominal cavity, thus avoid the risk of bowel injury when isolating the adhesive abdominal viscera. Through the establishment of pneumoperitoneum directly into the bladder cavity, and dissection of the scar tissue of the fistula, isolating the vaginal wall and the bladder wall, and then suture them separately. This procedure greatly simplifies the previous intraperitoneal surgery. Compared with the transvaginal approach, we have a clear vision of the relationship between the fistula orifice and the ureteral orifice, avoiding the possibility of damage to the ureter. Therefore, the transvesicle approach is a simple and feasible approach to most VVFs.

This study has the following limitations. First, this is a retrospective study and the comparison of the LESS approach with the conventional suprapubic transvesical approach or transabdominal approach is still needed in the future. Second, the laparoscopic single-port surgery is more challenging for surgeons. It is difficult to use the conventional laparoscopic instrument in single-port especially suture. The angle of the needle holder and the forceps are quite important. It is not suitable for larger fistulas, concomitant ureteral injuries, or severe damage infection and adhesion of fistula's surrounding tissue. Third, our device lacks standardization in particular in the use of the two rings, and our next goal is to make commercial standardized device.

The studies involving human participants were reviewed and approved by Sun Yat-sen Memorial Hospital. The patients/participants provided their written informed consent to participate in this study.

Copyright © 2021 Fan, Ma, Lai, Li, Huang and Huang. This is an open-access article distributed under the terms of the Creative Commons Attribution License (CC BY). The use, distribution or reproduction in other forums is permitted, provided the original author(s) and the copyright owner(s) are credited and that the original publication in this journal is cited, in accordance with accepted academic practice. No use, distribution or reproduction is permitted which does not comply with these terms.