Magnetic resonance imaging (MRI) signal intensity of normal skeletal muscle is generally slightly higher than that of water and much lower than fat on T1-weighted (T1W) images and much lower than both fat and water on T2-weighted (T2W) images (1). Alterations of signal intensity of skeletal muscles due to pathologic conditions is easily identified on inversion-recovery and fat-suppressed T2W images (1, 2). The potential causes are diverse, but usually the abnormal signal intensity identified on MRI falls into one of three recognizable patterns: edematous lesions, mass lesions, or fatty infiltration (1). All three patterns have been identified within the paraspinal muscles of dogs on MRI. Edematous lesions of the paraspinal muscles have been observed in immune-mediated polymyositis of the sublumbar muscles (3), associated with meningoencephalitis of unknown origin in the cervical musculature, or due to paraspinal infection in the ventral cervical and lumbar musculature (4). In cases of paraspinal infection with abscess formation, a mass effect caused by cavitary lesions may be identified on MRI (4). Neoplastic lesions result in mass lesions within the musculature either originating from the vertebral column or the paraspinal musculature itself. A third pattern consists of fatty infiltration of paraspinal muscles and has been observed in chondrodystrophic and non-chondrodystrophic dogs, probably driven by a combination of chronicity and severity of spinal cord pathology (5).

Medical records between August 2014 and June 2016 were reviewed and scrutinized for dogs undergoing MRI of the thoracolumbar spine as a result of acute intervertebral disk disease. Dogs were included in the study if they were presented for MRI within 7 days of the onset of clinical signs. Further inclusion criteria were a neurologic examination and that the MRI examination protocol included a fat-suppressed T2W sequence. Dogs were excluded when the medical history suggested changes in the spinal musculature may have occurred. This could be a consequence of a car accident, a fall from a great height, previous spinal surgery within a period of 1 year or previous injections in the paraspinal region. MRI examination was performed in a 1.0-T open permanent magnet (Philips HFO Panorama, Philips Medical Systems, PC Best, Netherlands).

Duration of clinical symptoms and neurological grade was noted based on clinical records. The neurological grade was classified based on neurologic examination as grade 1 (pain only), grade 2 (ambulatory paraparesis), grade 3 (non-ambulatory paraparesis), grade 4 (paraplegia with no loss of deep pain sensation), or grade 5 (paraplegia with loss of deep pain sensation) (6).

Images were reviewed by a board-certified radiologist (DSG) for the presence of signal alterations within the paravertebral musculature in fat-suppressed T2W sequences, either Short-TI Inversion Recovery sequence or Spectral Presaturation with Inversion Recovery sequence. If muscle signal alterations were present, their anatomical localization was noted based on the affected muscle, the site along the vertebral column, side, laterality (uni- or bilateral), length, and signal intensity in the different sequences as well as contrast enhancement in postcontrast sequences, if available, were assessed.

To investigate possible influencing factors on the prevalence of muscle signal alterations, the association between dogs with and without muscle signal alterations and type of disk extrusion, location of intervertebral disk extrusion, degree of compression, presence of epidural hemorrhage, duration of clinical symptoms in days, and neurological grade was calculated with a Chi-Square test. For factors with low cell frequency (<5) and binary outcome (type of disk extrusion) the Fisher’s exact test was performed. For low cell frequency (<5) and non-binary outcome, the number of categories was reduced to increase the counts in the remaining. Grouping was performed for the parameter “location of disk extrusion” according to the presence or absence of ribs into T3–T13 and L1–L7. The parameter “neurological grade” was grouped into ambulatory dogs (grades 1 and 2) versus non-ambulatory dogs (grade 3, 4, and 5).

Factors which were significantly associated (P < 0.05) with the presence of muscle signal alterations in the univariable analysis were offered to a multivariable logistic regression model. Variables were selected by stepwise backward selection, until only significant variables and confounders (variables changing the effect of other variables by >20%) remained in the model. Model fit was assessed by deviance statistics, chi-square goodness of fit test, and visual assessment of residuals. Statistical analysis was performed in NCSS 10 Statistical Software (2015) (NCSS, LLC. Kaysville, Utah). Differences were considered statistically significant if P < 0.05.

In five patients, biopsies of muscle parts exhibiting signal alterations were taken during decompressive surgery following MRI. Samples were fixed in 10% formalin, processed routinely, stained with hematoxylin and eosin and assessed by a board-certified pathologist.

Signal alterations within the paraspinal muscles were noted in 37 of 103 dogs (36%). The signal intensity was hyperintense on T2W images in 29 dogs, with changes only visible on fat-suppressed sequences in eight dogs (22%) (Figures 1 and 2). T1W images were available in 35 dogs (95%) with hypointense signal alterations observed in six dogs (17%). For the remaining 29 dogs (83%), lesions appeared isointense on T1W images. 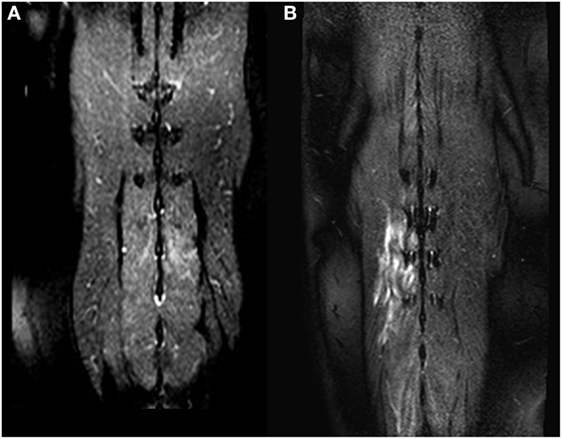 Figure 1. Dorsal T2-weighted fat-suppressed images of two different dogs (A,B). In (A), only a mild signal alteration is visible in the Mm. multifidi of a French Bulldog with acute intervertebral disk herniation at the level L2/L3. More extensive signal alterations are visible in the Mm. multifidi of a Basset hound (B) with intervertebral disk extrusion at the level T12/T13. Both dogs had a neurologic grade of IV.

Figure 2. Dorsal T2-weighted (T2W) fat-suppressed image of a French bulldog presented with intervertebral disk extrusion at the level L5/L6. (A) bilateral signal alterations are visible in the hypaxial muscles (black arrows). On the T2W fast spin echo transverse image (B), only a focal area of increased signal intensity is visible in the M. psoas major on the right side (white arrow).

Contrast medium was administered in 30/37 dogs with signal alterations. Enhancement was observed on either a T1W sequence or WATS (selective water excitation pulse) in 13 dogs (43%), and no enhancement was seen in 17 dogs (57%). T2* sequences were available in all dogs, a signal void in T2* was not detected in any dog. 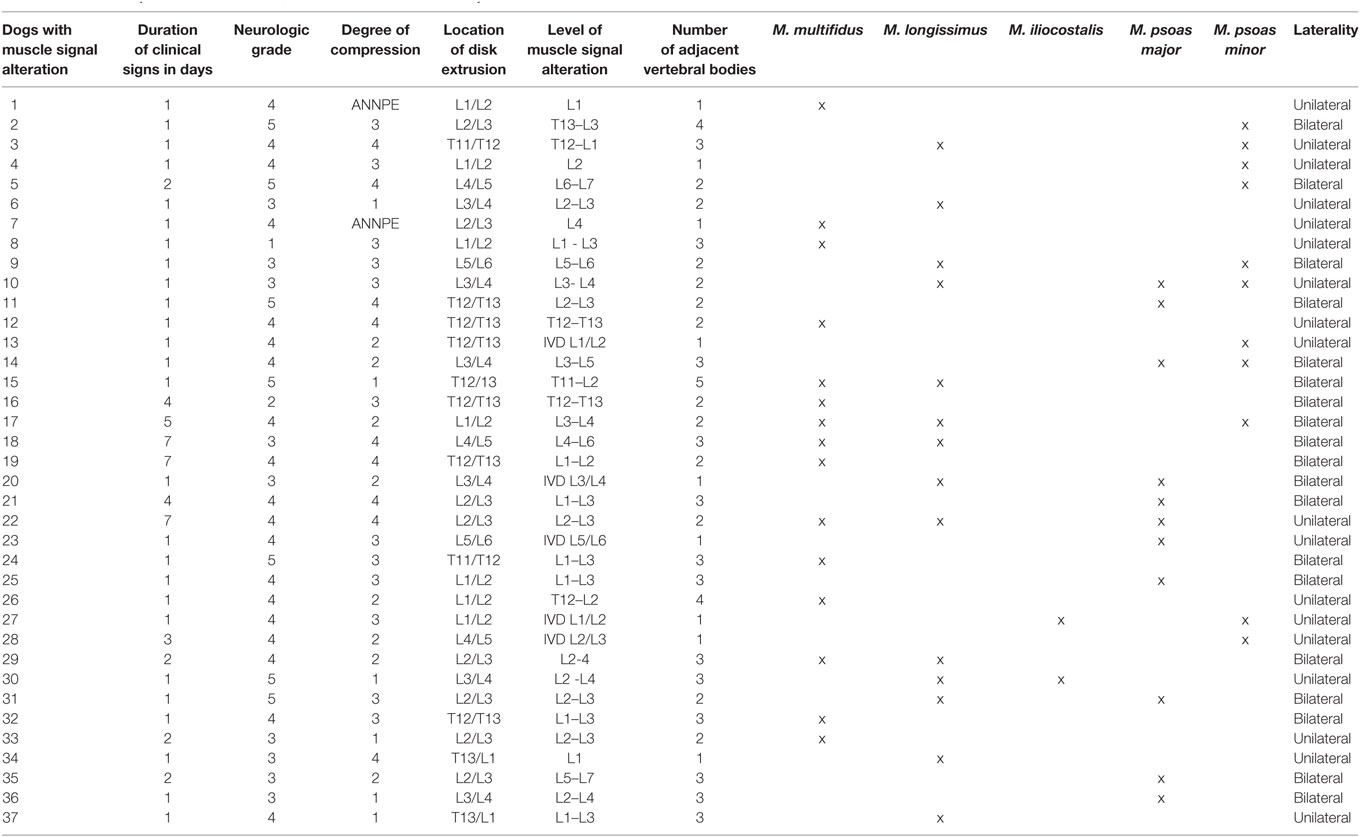 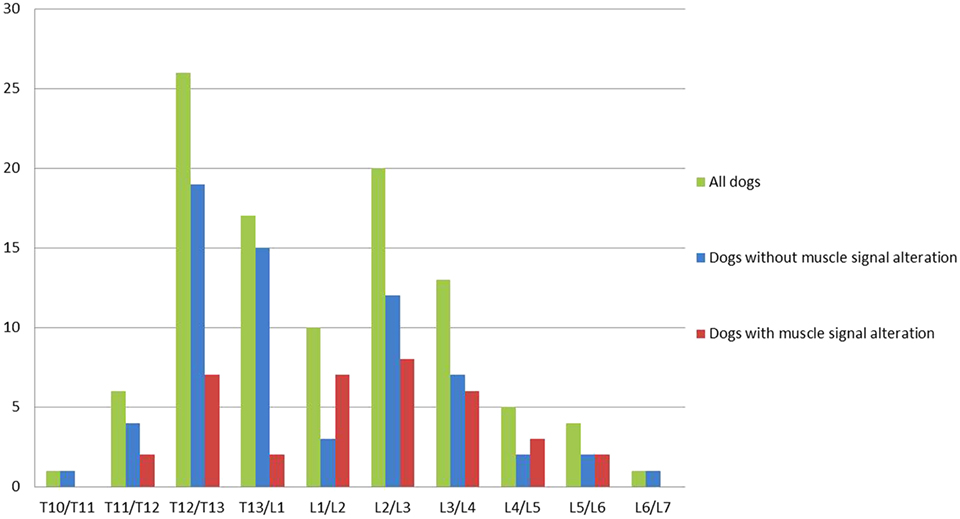 Compressive extrusions were present in 91 dogs (88%), whereas 12 dogs (12%) had an ANNPE without compression of the spinal cord. Only one dog demonstrated ANNPE signal alterations within the paraspinal muscles and type of disk extrusion was not associated with muscle signal alterations (Fisher’s exact test P = 0.20372).

For both, dogs with an extrusion cranial to L1 and caudal to L1, the median neurological grade was 4.

Histopathological examination revealed a focal to focally extensive, mild to moderate acute muscle fiber degeneration and necrosis in three samples, characterized by fragmentation of the sarcoplasm. The basal lamina and the endomysium were intact in most cases. Between the degenerated fibers, a mild to moderate accumulation of fibrin, neutrophilic granulocytes and edema was present. In addition, there was extensive hemorrhage in one sample and two muscle samples showed mild edema.

Paraspinal muscle signal alteration was observed in 36% of dogs with acute intervertebral disk extrusion and is, therefore, considered a common finding on MRI examination. The MRI pattern of these changes corresponds to a muscle edema. This pattern of T2-hyperintense and T1-iso- to hypointense signal abnormality is an unspecific alteration and the potential underlying causes are diverse. This finding has not been previously described in dogs or humans in association with acute intervertebral disk extrusion. The underlying cause for the signal changes is unknown; therefore muscle samples from the affected musculature were taken prospectively in five dogs to investigate the underlying pathomechanism. The results of the histopathologic examination were rather unspecific with changes including edema and focal muscle necrosis. An explanation for these changes may be trauma, ischemia or denervation, but the exact cause could not be determined by histopathology.

Both epaxial and hypaxial muscle groups are innervated by the spinal nerves from their dorsal or ventral branches, respectively (9). Damage to these nerves can lead to denervation edema within the muscle. Muscle denervation is a well-known pathologic condition in humans. The muscles of the foot, upper limb or shoulder are most commonly affected, but can be observed in any skeletal muscle (10). Causes may include trauma or entrapment of peripheral nerves, but spinal cord pathology can also result in nerve injury. The least severe form of nerve injury is neurapraxia (10). In contrast to neurotmesis and axonotmesis, this damage does not lead to structural discontinuity of axons, but instead a conduction block within the nerve causes muscle denervation (10). Denervation edema as a consequence of acute intervertebral disk extrusion has not been described in humans. In humans, where an intervertebral disk herniation at the level L3/4 or further caudal does not result in spinal cord compression, an intervertebral disk extrusion in dogs can cause spinal cord compression even at the level L6/L7 (11). Since the vertebral canal in dogs is much smaller compared to humans, intervertebral disk extrusion often results in marked compression or contusion with damage to the neurons located in the gray matter (11). We observed an association of muscle signal alterations with intervertebral disk extrusion caudal to L1, where the amount of gray matter is increasing along the lumbar spine. An association of muscle signal alterations with more severe spinal cord injury is supported by the fact that a significantly higher number of dogs with muscle signal alterations were presented with a higher neurological grade. Neurological grade or more precise, loss of deep pain perception, is a prognostic factor for neurologic recovery. At this time, it remains unclear if muscle signal alterations may be able to provide information about the neurologic recovery of the patients.

The muscle signal alterations were best identified in fat-suppressed T2W sequences, which are used as part of our routine protocol in dogs with acute back pain to identify changes in soft tissues (2). The sequences enable changes to be identified in a high proportion of animals, including more than one third of the dogs (36%). In some of the dogs, the lesions showed contrast enhancement, but contrast enhancement of skeletal muscles did not seem to facilitate or further characterize the lesions. This is in contrast to reported cases in humans (10). Identification of paraspinal muscle signal alterations may be helpful in clinical MRI to differentiate intervertebral disk disease from fibrocartilaginous embolism or acute versus chronic intervertebral disk herniation, but further studies are necessary to answer these questions.

Consent procedure is not applicable, as this article is a retrospective study of clinical cases.

This study was carried out in accordance with the ethic recommendations of the veterinary Office, Kanton Bern, Switzerland.

The authors would like to acknowledge Gertraud Schüpbach and Beatriz Vidondo for their help with the statistical analysis of the data and Lisa Thomann-Harwood for English language editing. Parts of this study were presented as oral presentation at the EVDI annual meeting, 2017, Verona, Italy.

Copyright: © 2018 Trampus, Goepfert, Welle, Henke, Forterre and Schweizer-Gorgas. This is an open-access article distributed under the terms of the Creative Commons Attribution License (CC BY). The use, distribution or reproduction in other forums is permitted, provided the original author(s) and the copyright owner are credited and that the original publication in this journal is cited, in accordance with accepted academic practice. No use, distribution or reproduction is permitted which does not comply with these terms.