When owners decide to change their pet's food, a rapid transition may cause gastrointestinal distress. Yeast products may help with digestive upset during diet transition due to the bioactive compounds they possess, which may lead to improved intestinal morphology and integrity, modified gut microbiota, and modulated immune responses. The objective of this study was to determine the effects of a yeast cell wall fraction supplement on measures of gut integrity and fecal characteristics of adult dogs undergoing an abrupt diet transition. Twelve adult female beagles (mean age: 5.16 ± 0.87 years; mean body weight: 13.37 ± 0.68 kg) were used in a replicated 4 × 4 Latin square design with four 28-day experimental periods. During days 1–14, dogs were fed a dry kibble diet and supplemented with a placebo (cellulose; 125 mg/d) or yeast product (365 mg/d; equivalent to 0.2% of diet). During days 15–28, dogs remained on their placebo or yeast treatments but were rapidly transitioned to a canned diet or high-fiber diet. Fresh fecal samples were collected on days 13, 16, 20, 24, and 27 for measurement of pH, dry matter, calprotectin, immunoglobulin A (IgA), Escherichia coli, and Clostridium perfringens. Blood samples were collected on days 14, 17, and 28 to measure serum lipopolysaccharide-binding protein concentrations. All data were analyzed using the Mixed Models procedure of SAS 9.4. Fecal pH, dry matter, calprotectin, IgA, and E. coli were not affected (P > 0.05) by treatment before diet transition. Dogs supplemented with yeast cell wall fraction tended to have higher (P = 0.06) fecal C. perfringens counts than the controls. After diet transition, most parameters were not altered (P > 0.05) by treatment except that yeast-supplemented dogs tended to have higher (P = 0.06) fecal IgA than controls. Our results suggest that the yeast product may modestly improve intestinal health after an abrupt diet transition in adult dogs by enhancing intestinal immunity.

Diet transition commonly occurs in dogs when owners purchase new products. If not transitioned slowly, digestive upset may occur, which results in poor stool quality and gastrointestinal (GI) upset. Based on past research, the supplementation of functional ingredients such as yeast products may serve as a potential approach to minimizing digestive upset in such situations.

Results from those studies indicate that supplementation of yeast products may improve GI health by modifying gut microbiota, improving intestinal morphology and integrity, and/or modulating immune responses. In this study, we aimed to determine the effects of a yeast cell wall fraction product on measures of GI tract stability and fecal characteristics of adult dogs undergoing an abrupt diet transition. We hypothesized that yeast cell wall fraction-supplemented dogs would have greater gastrointestinal stability and protection from a disrupted gut barrier function due to abrupt diet change, as well as reduced fecal pathogens compared to control dogs receiving a placebo treatment.

All animal care and experimental procedures were approved by the University of Illinois Institutional Animal Care and Use Committee (Protocol No. 17276) prior to experimentation. All methods were performed in accordance with the United States Public Health Service Policy on Humane Care and Use of Laboratory Animals. Twelve adult female beagles (mean age: 5.16 ± 0.87 years; mean BW: 13.37 ± 0.68 kg) were used and housed individually in pens (1.0 m wide × 1.8 m long) in a humidity- and temperature-controlled room on a 14 h light: 10 h dark cycle. Dogs had access to fresh water ad libitum at all times. All diets were offered to dogs once a day in the morning to maintain body weight throughout the study. Dogs were weighed and body condition scores were assessed using a 9-point scale (13) weekly before feeding.

A replicated 4 × 4 Latin square design was conducted. Each 28-d experimental period consisted of an adaptation phase (d 1–14) and a diet transition phase (d 15–28). Three diets that met all Association of American Feed Control Officials (AAFCO) (14) nutrient recommendations for adult dogs at maintenance were fed, which included (1) a baseline diet (a dry kibble experimental diet; Tables 1, 2); (2) a commercial canned diet (CD; Ol' Roy Cuts in Gravy with Savory Beef; Walmart, Bentonville, AR; Table 2); and (3) a high-fiber diet (HFD) composed of the experimental diet plus 22.5 g/d of soluble corn fiber (Nutriose® Soluble Digestion-Resistant Prebiotic Corn Fiber; Roquette America Inc., Geneva, IL) that was top-dressed on the diet just prior to feeding. Treatments were given to dogs via gelatin capsules (d 1–28) prior to the diet each day, which included a placebo (125 mg cellulose/d) or yeast cell wall fraction (Safmannan® Phileo by Lesaffre, Marcq-en-Barœul, France; 365 mg/d; equivalent to 0.2% of diet). The yeast cell wall fraction tested was from Saccharomyces cerevisiae and the analyzed chemical composition is presented in Table 3. During the adaptation phase, all dogs were fed the experimental diet and supplemented with placebo or yeast product. During the diet transition phase, dogs remained on their placebo or yeast treatments, but were fed their new diet (CD or HFD). Therefore, dogs were allotted to one of four groups each experimental period: (1) Yeast CD; (2) Yeast HFD; (3) Placebo CD; and (4) Placebo HFD. 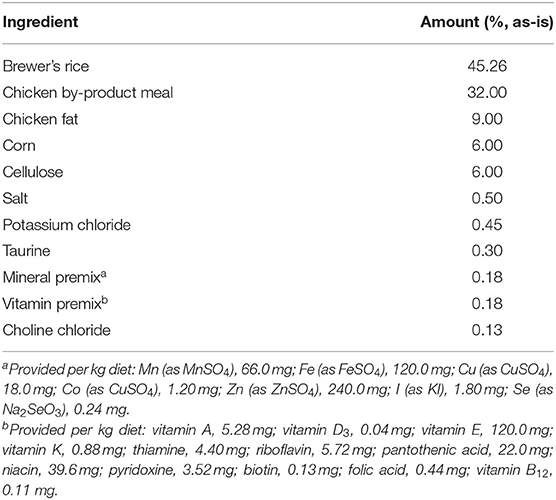 Table 1. Ingredient composition of the experimental diet fed to yeast- or cellulose-supplemented dogs. 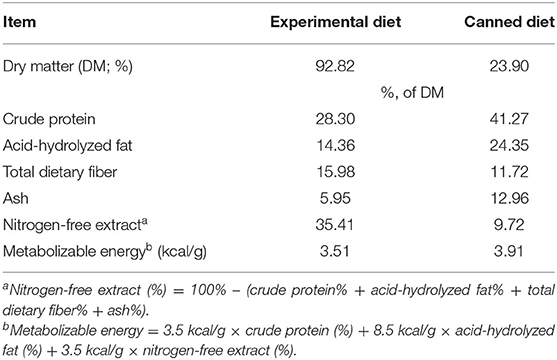 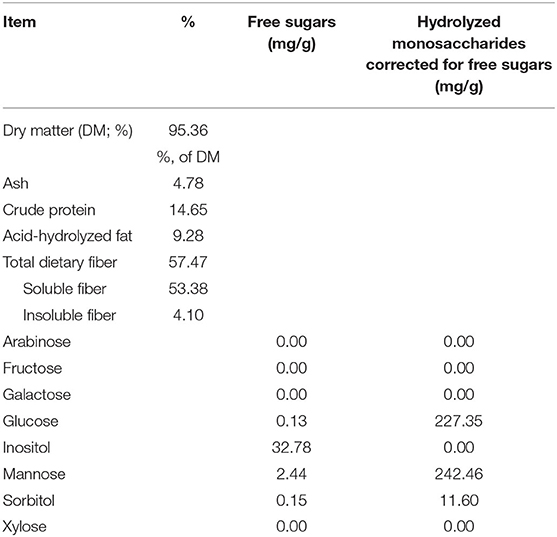 On d 13, 20, and 27 of each experimental period, two more aliquots of fresh fecal samples were collected for determination of fecal IgA, calprotectin and potential pathogenic bacteria (E. coli and C. perfringens). For fecal IgA and calprotectin measurements, the aliquot was stored at −80°C until analyses. For fecal bacteria analyses, the aliquot was processed for bacterial culture immediately after collection.

Average daily food, energy, and nutrient intakes, including protein, fat, TDF, and NFE were not changed by yeast treatment prior to diet transition (Table 4). Post-transition diets affected nutrient intakes. Daily intakes of protein, fat, and energy were higher (P < 0.01), while daily intakes of TDF and NFE were lower (P < 0.01) in dogs fed the CD than those fed the HFD (Table 5). Average BW (13.52 kg) and body condition score (7.15/9) were not altered by yeast treatment prior to and after diet transition (Table 4; Figure 1A). Body weight was affected by diet after diet transition. Dogs consuming CD had greater decreases (P < 0.01) in BW than dogs consuming HFD (Figure 1A). 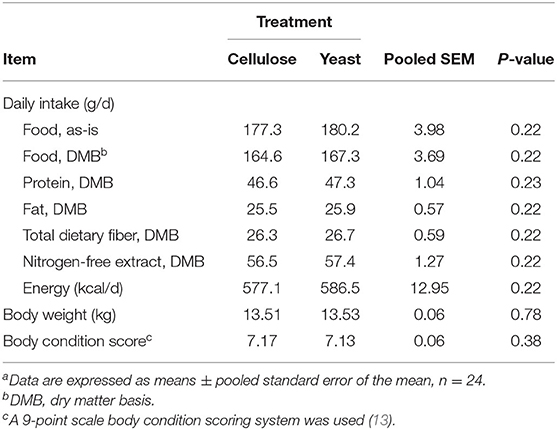 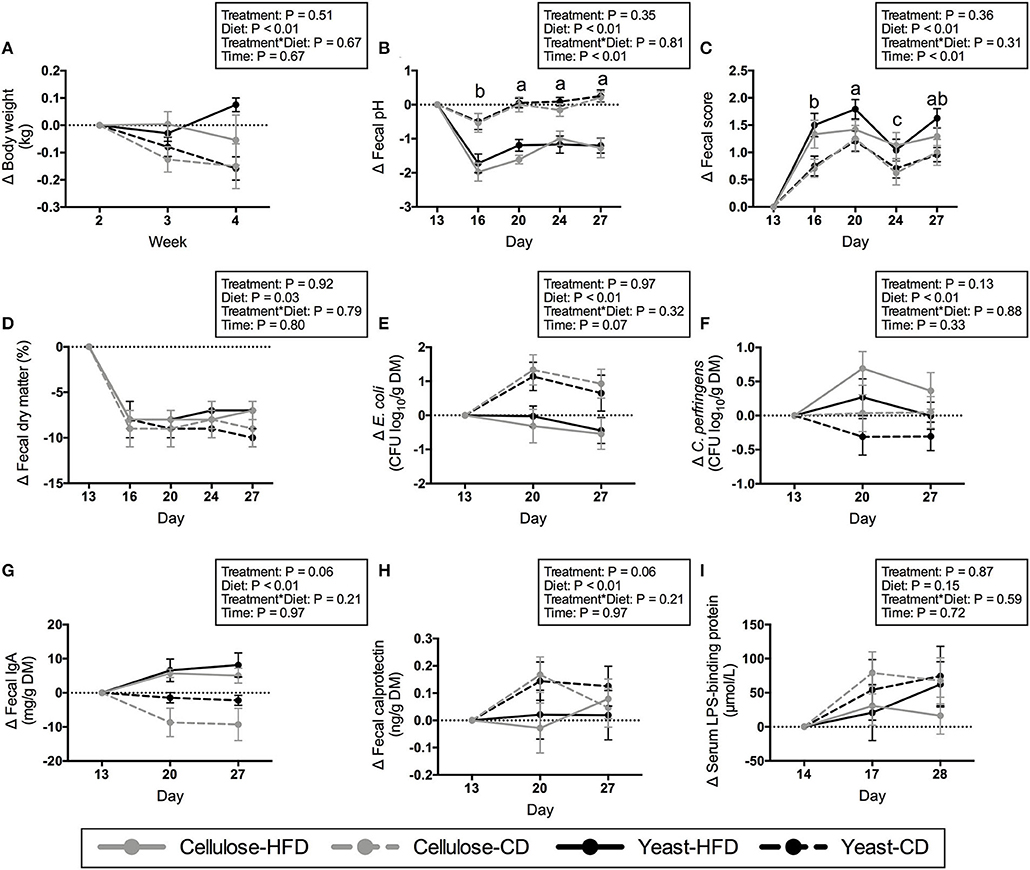 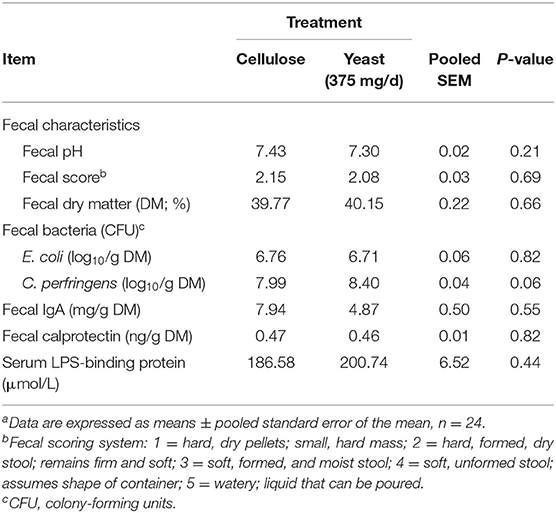 Diet transition occurs when pet owners purchase different products, which might result in GI discomfort. Yeast products may serve as a functional ingredient in dog foods and may protect animals from digestive upset due to its benefits on GI health. Here, we investigated the effects of yeast cell wall fraction on fecal characteristics and GI tract stability in adult dogs undergoing diet transition from a dry kibble diet to a high-fiber diet or canned diet. Our findings revealed that before diet transition, all indices except for fecal C. perfringens counts, were not altered by yeast supplementation. After diet transition, all measurements, except for fecal IgA concentration were not changed by yeast treatment. Fecal IgA concentrations tended to increase in yeast-supplemented dogs.

Diet transition led to significant changes to fecal characteristics and inflammatory biomarkers. Fecal pH decreased after dogs were fed HFD, which was expected. Lower fecal pH is due primarily to greater short-chain fatty acid concentrations as a result of fiber fermentation by microbiota in the hindgut (21, 22). Fecal scores increased and fecal DM decreased when dogs were fed both HFD and CD, indicating wetter and/or looser stools. Fecal calprotectin, a protein complex present in neutrophils, monocytes and reactive macrophages, has been reported to be increased in dogs with chronic diarrhea and chronic inflammatory enteropathies (23, 24). Here, we observed increased fecal calprotectin concentrations after diet transition, which reveals a slight elevation in GI inflammation. Finally, serum LPS-binding protein concentrations were elevated after diet transition. LPS binding-protein binds to endotoxins, including LPS from Gram-negative bacteria, with their concentration being increased after endotoxemia or bacteremia (25, 26). The increased serum LPS-binding protein concentrations in this study suggested greater GI permeability (leaky gut) after diet transition.

Fecal IgA was the only parameter that tended to be affected by yeast supplementation after diet transition. Elevated secretory IgA concentrations indicate enhanced mucosal immunity. Secretory IgA in the intestine plays a role in protecting mucosal surface against enteric antigens by inhibiting colonization and invasion of pathogens as well as food antigen uptake (27, 28). This response was in agreement with previous studies that reported elevated IgA concentrations in dogs consuming yeast products, indicating enhanced mucosal immunity. Middelbos et al. (4) noted that ileal IgA concentrations tended to respond quadratically (P = 0.09) to yeast cell wall supplementation in adult healthy dogs, with the highest concentration coming from the 0.25% supplementation level. Swanson et al. (11) supplemented 0.25% mannanoligosaccharides (MOS), the main component of the yeast cell walls, to adult healthy dogs and observed a tendency (P = 0.06) of increased ileal IgA concentrations. Increased IgA concentration may possibly be explained by two major components of the yeast cell walls, beta-glucans and MOS. Beta-glucans have been shown to be an immunostimulant that modulates innate and adaptive immune responses in various animal species, including dogs (29–31). As an immunostimulant, beta-glucans induce a cascade of immune responses by binding to dectin-1 receptors that are expressed on immune cells such as macrophages, monocytes, dendritic cells and neutrophils (32). The possible mechanisms by which MOS induce immune responses include the binding of mannose receptors that are expressed on antigen-presenting cells, including macrophage and dendritic cells (33). This response is supported by findings from previous studies in dogs, broilers, and pigs whereby oral administration of MOS led to enhanced immunity (34–37).

The lack of significant effects on most intestinal health indices by yeast supplementation in this study could be due to the short treatment period used or the low supplement dosage tested. Grieshop et al. (37) observed decreased fecal E. coli counts in dogs supplemented with 1% MOS for 28 d. In dogs with enteropathogenic E. coli-induced diarrhea, supplementation of 2 g/kg BW MOS for 20 d resulted in faster recovery (42). Therefore, testing the yeast cell wall fractions with longer supplementation periods and/or higher dosages may be suggested in the future.

The animal study was reviewed and approved by the University of Illinois Institutional Animal Care and Use Committee.

KS and RR designed the experiment. C-YL and MM performed all laboratory analyses. C-YL and MC performed the animal trial and sample collection. C-YL conducted statistical analysis and wrote the manuscript. All authors have read and approved the manuscript.

The authors declare that this study received funding from Phileo by Lesaffre. The funder was not involved in the study design, collection, analysis, interpretation of data, the writing of this article or the decision to submit it for publication.

RR was employed by Phileo by Lesaffre.

We sincerely thank Sungho Do, Thunyaporn Phungviwatnikul, Kelly Sieja, Wanting Shi, and Xiaojing Yang for their assistance with sample collection.

Copyright © 2020 Lin, Carroll, Miller, Rabot and Swanson. This is an open-access article distributed under the terms of the Creative Commons Attribution License (CC BY). The use, distribution or reproduction in other forums is permitted, provided the original author(s) and the copyright owner(s) are credited and that the original publication in this journal is cited, in accordance with accepted academic practice. No use, distribution or reproduction is permitted which does not comply with these terms.

Nutrition and Management of Animals We Keep as Companions