Thomas B. Hildebrandt1 and

The mean estrous cycle length of the greater one-horned (GOH) rhinoceros is 43 ± 6 d (1, 2). Like all other rhinoceros species, the GOH rhinoceros (Rhinoceros unicornis) is mono-ovulatory. Follicles grow in waves, from which the dominant, preovulatory follicle develops. The preovulatory, Graafian follicle measures an exceptional 10–12 cm in diameter, which is much larger than in other rhinoceros species. In fact, with a volume of 300–500 mL, it is the largest ovulatory follicle described for any mammal species (2).

Despite available profound knowledge on reproduction biology in GOH rhinoceros, many individuals are affected by sub- or infertility, silent estrous, anestrous, early embryonic death, or still birth (3–5). Early and regular captive breeding is of high importance in female GOH rhinoceros due to their high prevalence to develop genital tract tumors and consequent cease of reproduction by the age of 18 years in captivity (4). So far, assisted reproduction using fresh and frozen-thawed semen in artificial inseminations (AIs) has been used (5). Pregnancy rates after AI of up to 50% were achieved upon ovulatory estrous cycles (5).

Estrous synchronization in anestrous females to achieve ovulation and conception after natural mating or AI is an assisted reproduction tool so far described in black and white rhinoceros (6–8). For this, synthetic progestin, altrenogest, and chlormadinone acetate, combined with a hCG or a GnRH analog has been used to synchronize estrous and trigger ovulation (8–10). Oral progestin ceases folliculogenesis for the duration of the treatment. Removal of the oral progestin induces a rebound effect on the hypothalamus-pituitary axis, which initiates the growth of a new follicular wave and development of an ovulatory follicle. In anestrous white rhinoceros, oral progestin treatment paired with GnRH analog deslorelin implants resulted in increased luteal activity suggesting an ovulation rate of 93.3% (4). Consequently, use of oral estrous synchronization protocols have led to multiple pregnancies after natural mating and assisted reproduction in anestrous white and black rhinoceros (8, 9, Hermes, unpubl data). In addition, ovulation induction using GnRH analogs has also been described in white rhinoceros (11, 12).

In GOH rhinoceros, irregular, and an-ovulatory estrous cycles with subsequent formation of hemorrhagic follicles represent a challenging problem in captive breeding programs. However, estrous synchronization has yet not been described for GOH rhinoceros. Only ovulation induction has been briefly mentioned being used during AIs (2, 5). Here, exogenous GnRH analogs have been used to induce ovulation in two females with behavioral but sometimes an-ovulatory estrous. This preliminary data show that GnRH analogs, cystorelin, and deslorelin, induced five ovulations in a total of seven estrous cycles (2, 5). Yet, conclusions on the efficacy of GnRH analogs in inducing ovulation in GOH rhinoceros is limited, because the number of treatments is divided between different GnRH analog formulations and because treated females with behavioral estrous might have ovulated spontaneously even without administration of GnRH.

While hormone activity and ovarian dynamics can be monitored closely (1, 2), there are no reports on estrous synchronization, and there is limited data on ovulation induction in GOH rhinoceros. Therefore, we intended to test hCG and GnRH analog histrelin for their ability to induce ovulation in an-ovulatory GOH rhinoceros.

Ovulation induction was performed in one anestrous, 12-year-old, captive female GOH rhinoceros (studbook no: 367) over a study period of 4 years. The study animal is a wild born, orphan transferred from Nepal to the Vienna Zoo at the age of 3 years. The female is housed with a fertile male in separate enclosures. Continuous hormone analysis had been conducted since this female was 4 years of age. From the age of 9 years, regular peaks of estrogen-precursors indicated follicular development, but no clear pregnane peaks were measured, suggesting that ovulation never occurred.

The female has been trained to tolerate transrectal ultrasound examination (GE LOGIQ e Vet, GE Medical Systems, Wuxi 214028, China). Transrectal ultrasound monitored ovarian dynamics and development of preovulatory follicles. Weekly examinations were gradually increased toward daily ultrasounds when a dominant follicle emerged and grew >8 cm. Yet, without treatment pre-ovulatory follicles became atretic or hemorrhagic as previously described by Stoops et al. (2). The treatments to induce ovulation started when the animal was 12 years, at an age a regular estrous cycle should have long been established. When the preovulatory follicle (≥11 cm) was present for 48 h 10.000 IU hCG (Chorlulon 5000 I.U., MSD Tiergesundheit, A-1220 Vienna, Austria) or 1.5 mg of histrelin (Histrelin acetate biorelease, 0.5 mg/ml, Bet Pharm, Lexington, KY 40511, USA) were administered by intramuscular injection below the ear. In the first treatment series hCG was administered four times. This was followed by one time GnRH, two times hCG, two times GnRH, and finally two more times hCG. The interval between treatments ranged between 43 and 364 d. Irregular intervals between treatments were due to: (1) seasonal limitations to breed the female after ovulation induction during the winter season; (2) presence of persistent haemorrhagic follicles before new follicular waves started; and (3) periods of follicular inactivity during which no preovulatory follicles develop. Long intervals between treatments >43 d assured that possible drug-drug interactions could not occur when different hormones were used.

Success of the ovulation induction was determined by rupture of the Graafian follicle and the formation of a corpus luteum >48 h after hCG/GnRH injection and confirmed by endocrine monitoring.

For statistical analysis, day 0 represented the day of hCG injection. Hormone results were summarized in 3-day intervals starting −9 days before until +30 days after ovulation induction. Endocrine results of the treatments were grouped into those where pregnane increased at day 6 >100 ng/g feces and a corpus luteum had been diagnosed by ultrasound vs. those where pregnane at day 6 remained <100 ng/g feces and no corpus luteum was detected. Hormone results were compared using the Mann-Whitney Test and considered significantly different when P < 0.05.

Table 1. Two-tailed P-values of the comparisons between high and low estrogen and pregnane concentrations during ovulation induction (n = 11) in one GOH rhinoceros. 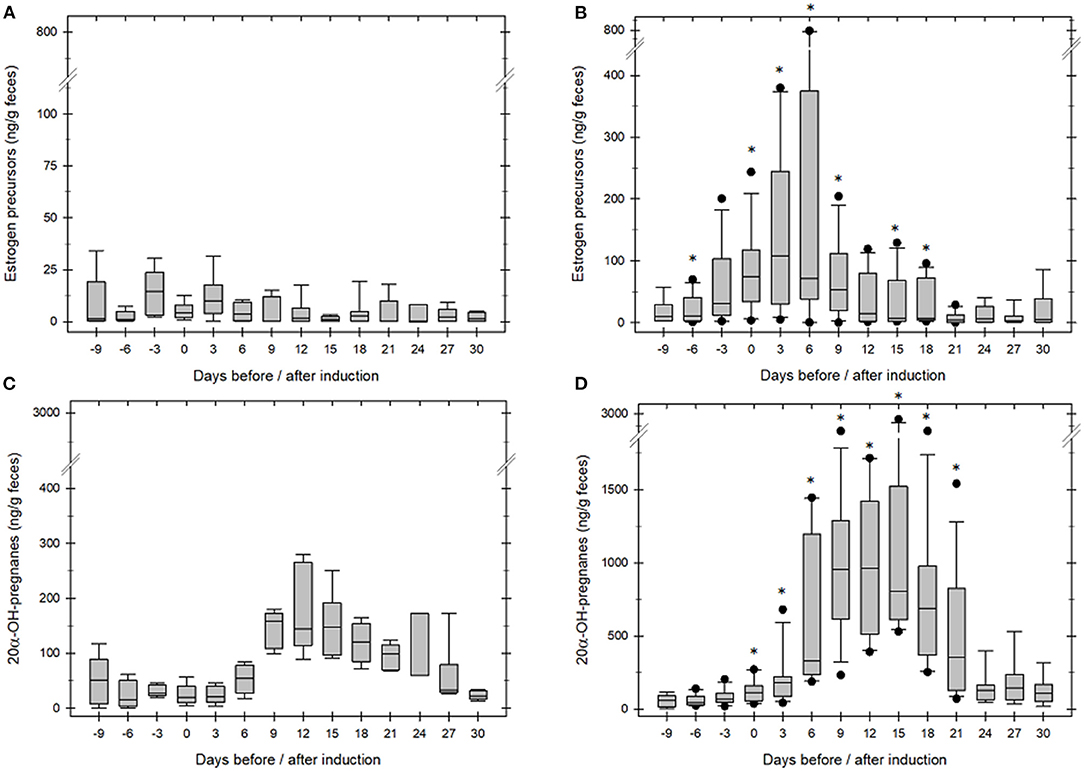 HCG administered in the presence of a preovulatory follicle induced six ovulations resulting in an ovulation rate of 75% (n = 6/8). Injectable GnRH analog triggered ovulation only once (n = 1/3). Despite the rise in estrogen, the formation of a corpus luteum, and the increase in luteal activity as indicators for the induced ovulation, behavioral estrous was not observed before or after any of the hCG/GnRH treatments.

Anestrous and an-ovulatory rhinoceroses represent a challenge for captive breeding programs (1, 2, 5, 12–14). High genetic value of a female diagnosed with ovulation failure after natural mating or assisted reproduction requires means of reliable ovulation induction. Here we showed that injectable hCG or GnRH administered at the presence of a preovulatory follicle induced ovulation in one an-ovulatory GOH rhinoceros. Over both treatments ovulation induction was successful in 63.6% of the time.

Results on the use of hCG for ovulation induction in GOH rhinoceros are consistent with results from white rhinoceros where 67% of estrous synchronizations using hCG resulted in ovulation (10). In white rhinoceros, the GnRH analog deslorelin has been superior to induce ovulation over hCG (10). Yet, the application of slow-release deslorelin implants is more challenging than i.m. injections and was therefore not attempted in this study (10).

On one hand, hormone-induced ovulation is technically challenging for many facilities and does not appear as a comprehensive method for reproduction management of captive GOH rhinoceros. It is likely limited to facilities with an advanced animal training program and where critical hardware such as an ultrasound machine and a restraint chute is present. On the other hand, in females at advanced age, with “erratic” an-ovulatory estrous cycles and conception failure but yet important genetics for the captive population, the use of hCG/GnRH during behavioral estrous might present a new, practical reproductive management tool.

The animal study was reviewed and approved by Ethics Committee of the Leibniz Institute for Zoo and Wildlife Reserach. Written informed consent was obtained from the owners for the participation of their animals in this study.

Copyright © 2021 Hermes, Balfanz, Haderthauer, Dungl, Hildebrandt and Schwarzenberger. This is an open-access article distributed under the terms of the Creative Commons Attribution License (CC BY). The use, distribution or reproduction in other forums is permitted, provided the original author(s) and the copyright owner(s) are credited and that the original publication in this journal is cited, in accordance with accepted academic practice. No use, distribution or reproduction is permitted which does not comply with these terms.