Streptococcus uberis is recognized as an environmental mastitis pathogen in dairy cattle. The varied success rate of antibiotic treatment for S. uberis intramammary infection may be associated with the antimicrobial resistance (AMR) of these bacteria. This observational study aimed to analyze 228 S. uberis strains associated with bovine mastitis in northern Thailand from 2010 to 2017. AMR and AMR genes were determined by the minimum inhibitory concentration (MIC) using a microdilution method and polymerase chain reaction, respectively. The majority of S. uberis strains were resistant to tetracycline (187/228, 82.02%), followed by ceftiofur (44/228, 19.30%), and erythromycin (19/228, 8.33%). The MIC50 and MIC90 of ceftiofur in 2017 were 2–4-fold higher than those in 2010 (P < 0.01). Resistance to tetracycline and ceftiofur significantly increased between 2010 and 2017 (P < 0.05). The most common gene detected in S. uberis was tetM (199/228, 87.28%), followed by ermB (151/228, 66.23 %) and blaZ (15/228, 6.58 %). The association between tetracycline resistance and tetM detection was statistically significant (P < 0.01). The detection rates of tetM significantly increased, while the detection rates of tetO and ermB significantly decreased during 2010–2017. AMR monitoring for bovine mastitis pathogens, especially S. uberis, is necessary to understand the trend of AMR among mastitis pathogens, which can help create an AMR stewardship program for dairy farms in Thailand.

Bovine mastitis, usually caused by an intramammary infection (IMI) of microorganisms, contributes to a major loss in dairy production by decreasing the production of milk and early culling of dairy cows (1). Streptococcus uberis commonly causes mastitis in dairy cattle worldwide (2). Although the major sources of S. uberis in dairy farms include water, soil, plant matter, bedding materials, flies, and hay (2), several studies have suggested that transmission of S. uberis can also occur between cows (3, 4).

In northern Thailand, S. uberis was reported to be a common pathogen associated with clinical and subclinical mastitis (15). Although AMR among S. uberis associated with bovine mastitis was reported in many countries (16, 17), reports in Southeast Asia, including Thailand, are limited. We aimed to investigate the AMR phenotypes and genotypes of S. uberis isolated from bovine mastitis cases in northern Thailand. The observed AMR patterns may result in an effective treatment protocol for S. uberis IMI in this region.

This is an observational study that investigated phenotypic and genotypic AMR among archived isolates of S. uberis. S. uberis isolated from milk samples of cows with clinical or subclinical mastitis, submitted to the Faculty of Veterinary Medicine in Chiang Mai University (Thailand) between January 2010 and December 2017, were included in the study. All milk samples were collected and cultured as part of some previous programs during 2010–2017 from dairy cattle herds in Chiang Mai and Lamphun provinces in northern Thailand (Figure 1). These two provinces represent the most dairy-intensive region in northern Thailand, with an approximate population of 34,000 milking cows and 1,500 dairy farms (13). In this region, most dairy cattle are crossbred Holstein and raised in tied stalls. A bucket-type milking system is mostly adopted in this region. Most farms are small-holder dairy farms with 15–60 milking cows producing approximately 12 kg of milk/cow/day. 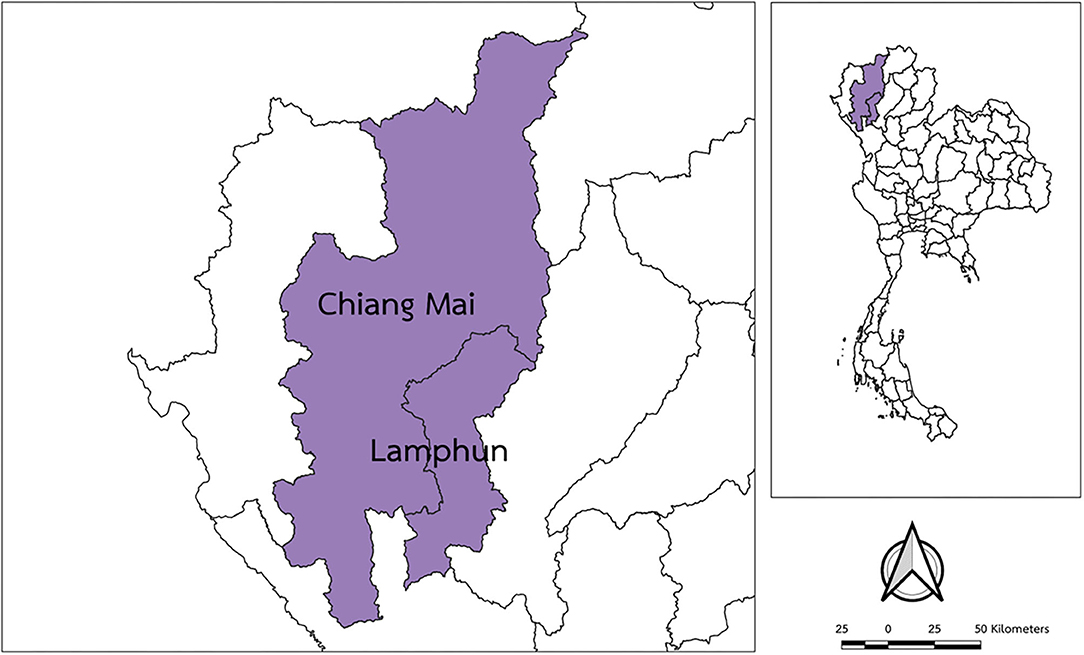 All selected frozen S. uberis isolates were re-grown on blood agar (Merck®, Darmstadt, Germany) with 5% bovine blood and incubated at 37°C for 24 h. Tests such as Gram staining, catalase test, and the ability to metabolize esculin, inulin, mannitol, and salicin were used to identify S. uberis. The genomic DNAs of all isolates were extracted using a DNA extraction kit (NucleoSpin®, Düren, Germany) and confirmed to be S. uberis using polymerase chain reaction (PCR) to detect the 16S rRNA gene (Table 1), as described previously (3). 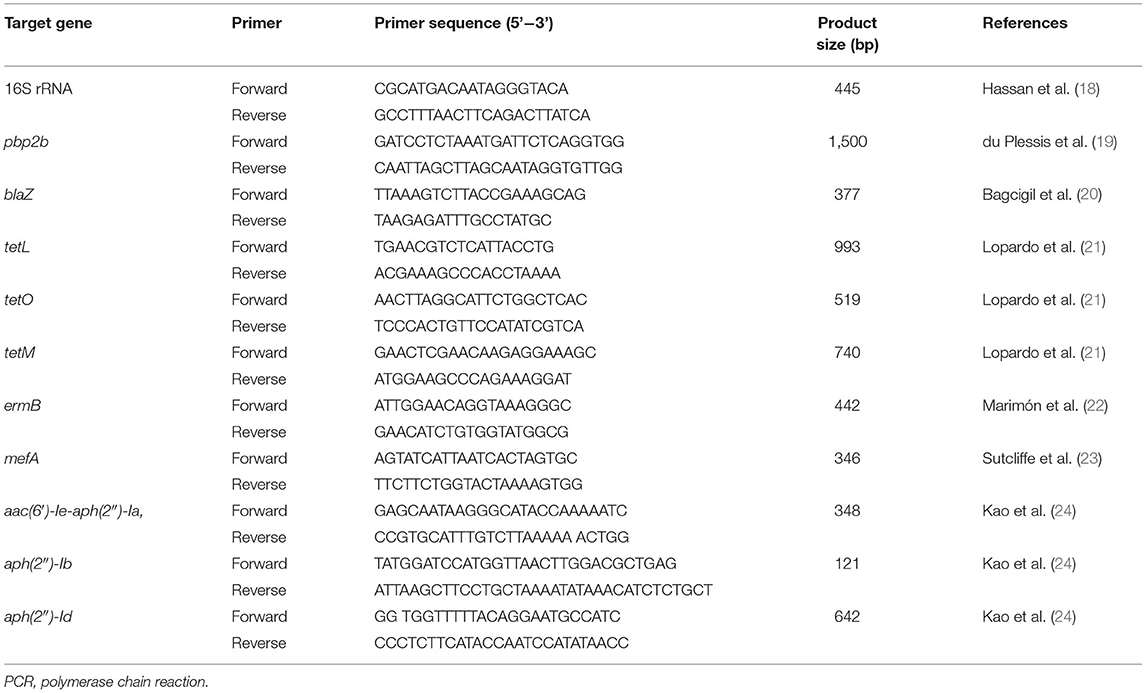 All S. uberis isolates were investigated for their antimicrobial susceptibility using the microdilution method recommended by the Clinical and Laboratory Standards Institute (CLSI) performance standards (25). Five antimicrobial agents were selected for testing: penicillin G, ceftiofur, erythromycin, tetracycline, and gentamicin. These antimicrobial agents were selected as representative drugs from five antimicrobial classes, namely penicillins (penicillin G), cephalosporins (ceftiofur), macrolides (erythromycin), tetracyclines (tetracycline), and aminoglycosides (gentamicin), which are commonly found in dairy herds. All antimicrobial agents were diluted in Mueller Hinton broth (MHB) according to the selected concentration ranges considered from literature reviews. The selected diluted concentration ranges were 0.0039–4 μg/mL for penicillin G, 0.0625–256 μg/mL for ceftiofur, 0.0039–8 μg/mL for erythromycin, 0.625–64 μg/mL for tetracycline, and 0.0039–16 μg/mL for gentamicin. A single colony of each S. uberis isolate was cultured in MHB. The turbidity of the inoculated MHB was adjusted to 0.5 McFarland using a McFarland spectrophotometer. Streptococcus pneumoniae ATCC® 49619 and Escherichia coli ATCC® 25922 were used as quality control strains. The minimum inhibitory concentration (MIC) breakpoint standards are listed in Table 2. The MICs of each antimicrobial agent that inhibited the visible growth of ≥50 and ≥90% of microorganisms (MIC50 and MIC90) were recorded for each antibiotic.

All S. uberis isolates were screened for AMR genes using PCR. The screened AMR genes included blaZ and pbp2b for beta-lactam resistance; tetL, tetO, and tetM for tetracycline resistance; ermB and mefA for macrolide resistance; and aac(6′)-Ie-aph(2″)-Ia, aph(2″)-Ib, and aph(2″)-Id for aminoglycoside resistance. The primers used for each gene are listed in Table 1. The PCR mixture (25 μL) contained 0.5 μL of forward and reverse primers (10 mol/L); 12.5 μL of 2X Taq Master Mix containing 1.25 U of Taq DNA polymerase, 1X ViBuffer A, 0.2 mM dNTPs, and 1.5 mM MgCl2 (MyTaq™ Red Mix; Bioline, NSW, Australia); 11 μL of DNase-free water; and 0.5 μL of DNA template (50–100 ng/μL). The tubes were placed in a thermal cycler with the following program: initial denaturation at 94°C for 5 min; 35 cycles of denaturation at 94°C for 30 s; annealing temperature as shown in Table 1, for 30 s; and an extension at 72°C for 60 s. The PCR products were determined by 2% agarose gel electrophoresis, stained with ethidium bromide, and visualized under ultraviolet illumination.

The MIC50 and MIC90 values were descriptively reported for each antimicrobial agent. AMR and distribution of detected AMR genes were expressed as percentages. MICs, AMR, and AMR gene detection were calculated separately for S. uberis isolates each year. Temporal trends in the MIC distributions of each antimicrobial agent were analyzed using the proportional-odds cumulative logit model analysis. The trends of AMR and AMR gene detection rates over the 8-year period (2010–2017) were analyzed using the Cochran–Armitage test for trend and logistic regression model analyses, which depicted “year of isolation” as the exposure variable and “AMR” or “AMR gene detection” as the outcome variable. These analyses were based on the principles previously described by Michael et al. (27) and Aerts et al. (28). The associations between AMR and the presence of AMR genes were determined using the χ2-test and Fisher's exact test at a significance level of P < 0.05. All statistical analyses were performed using the R statistical software version 4.0.0 (29).

Table 3. Distribution of MIC for Streptococcus uberis (n = 228) isolates from dairy cattle with subclinical or clinical bovine mastitis in northern Thailand during 2010–2017a. 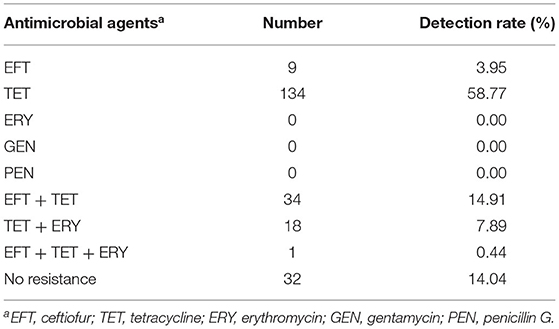 Table 5. Changes in MICs of antimicrobial agents among Streptococcus uberis (n = 228) isolates from dairy cattle with bovine mastitis in northern Thailand during 2010–2017.

Table 6. The five proportional odds cumulative logit models depicting the association between year of isolation and the changes in the minimum inhibitory concentrations (MICs) of five antimicrobial agents among Streptococcus uberis (n = 228) associated with bovine mastitis in northern Thailand during 2010–2017. 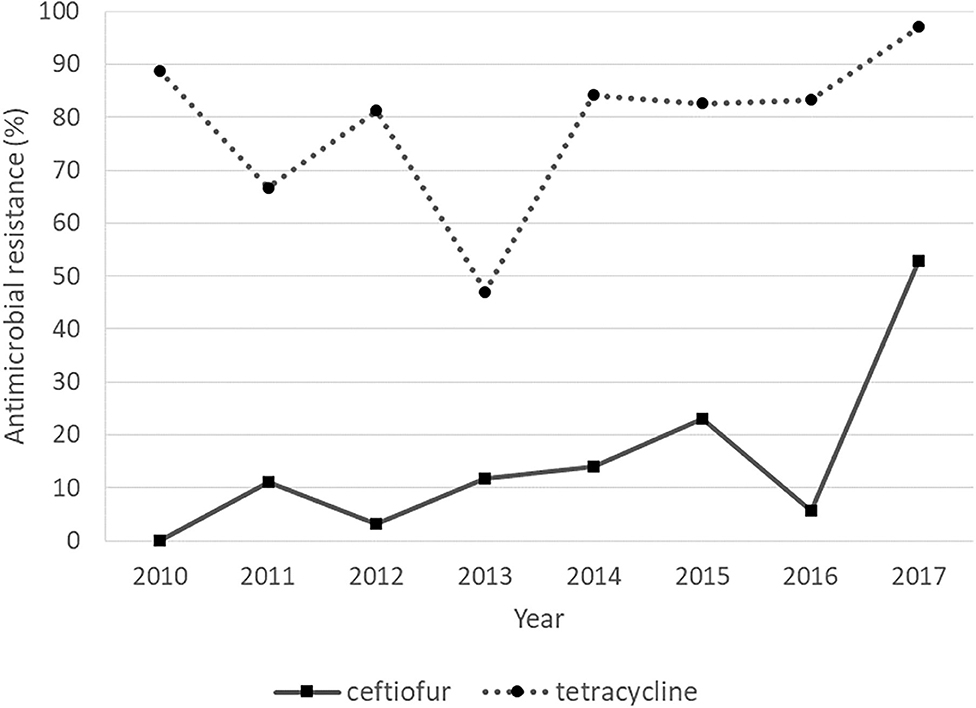 Figure 2. Antimicrobial resistance of Streptococcus uberis with “increasing” trends over a period of 8 years, from 2010 to 2017.

Table 7. The three logistic regression models depicting the association between year of isolation and tetracycline-, erythromycin-, and ceftiofur resistance among Streptococcus uberis (n = 228) associated with bovine mastitis in northern Thailand during 2010–2017. 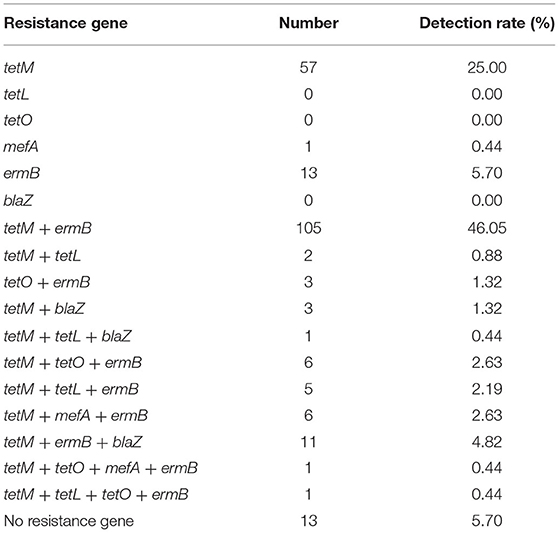 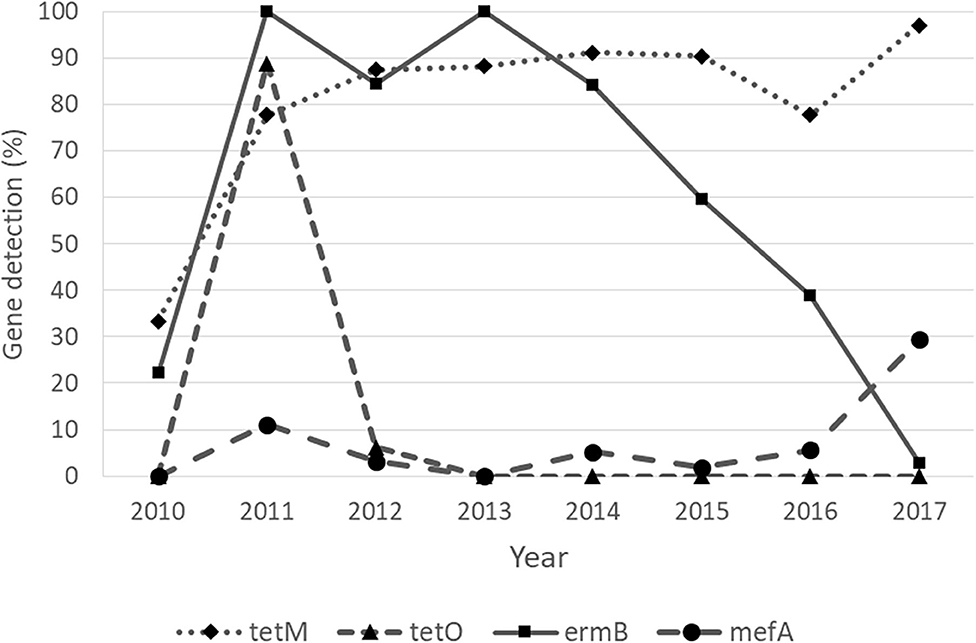 Figure 3. Detection of antimicrobial resistance genes of Streptococcus uberis with “increasing” (tetM and mefA) and “decreasing” (tetO and ermB) trends over a period of 8 years, from 2010 to 2017.

Table 9. The five logistic regression models depicting the association between year of isolation and the detection of tetL, tetM, tetO, ermB, and mefA among Streptococcus uberis (n = 228) associated with bovine mastitis in northern Thailand during 2010–2017.

Streptococcus uberis is one of the most prevalent environmental pathogens causing bovine mastitis in many regions, including Thailand. S. uberis IMI is common during the dry period and early lactation (28). Different classes of antimicrobials were used to treat S. uberis IMI (6). The AMR of S. uberis can potentially contribute to a successful mastitis treatment.

Beta-lactam class antimicrobials are frequently used for the prevention and treatment of dairy cattle diseases. In the present study, S. uberis showed a high susceptibility to penicillin G (100%) and ceftiofur (81%). This finding is consistent with the results of various studies (31, 36, 40). Likewise, we could not detect the pbp2b gene in our sampled S. uberis. This gene was reported to play an important role in beta-lactam resistance in streptococci (42, 43). Another gene, blaZ, which is responsible for beta-lactam resistance, was also detected at a low level in our S. uberis collection, similar to the findings in other previous reports (36, 40).

From 2010 to 2017, we were able to demonstrate an increasing trend of ceftiofur resistance among S. uberis, as evidenced by both the resistance rate and MICs from 2016 to 2017. Similarly, a study in China reported an increasing trend of ceftriaxone-resistant strains of S. dysgalactiae associated with bovine mastitis (44). Although statistical significance was not observed, an increasing trend was also demonstrated with the MICs of penicillin G. These findings raised the concern of beta-lactam resistance in S. uberis in the near future. A study in 2016 reported that more than half of dairy farmers in Chiang Mai province usually used penicillin/streptomycin (52.31%) for systemic treatment of cattle diseases (14). Moreover, most dairy farmers in this region used ampicillin/cloxacillin (87.69%), followed by cephapirin (82.31%) for intramammary treatment of bovine mastitis (14). Because beta-lactam antimicrobial agents are the most commonly used antimicrobial agents for mastitis treatment, the increasing trend of the MICs of these two beta-lactams may provide critically important evidence associated with the cure rate of bovine mastitis caused by S. uberis in the future. Antibiotic usage and AMR of S. uberis in dairy farms should be continually monitored to adjust the treatment protocols for bovine mastitis in Thailand.

In conclusion, from 2010 to 2017, S. uberis isolates associated with bovine mastitis in Thailand were highly and increasingly resistant to tetracycline, potentially controlled by tetM. In addition, throughout the study period, we observed increasing trends in the MICs of ceftiofur, together with an increasing trend in the ceftiofur resistance rate. These findings emphasize the importance of AMR monitoring for bovine mastitis pathogens, especially S. uberis, and can serve as guidelines for effective treatment decisions. The prudent use of antimicrobial agents in dairy farms, especially tetracycline and ceftiofur, should be intensively considered and applied in this region. Understanding the trend of AMR among mastitis pathogens can help create an AMR stewardship program for dairy farms in Thailand.

TZ, SB, and DP considered the study design. TZ and GN performed the laboratory experiments. SB performed the data analyses. SB and TZ prepared the manuscript. All authors contributed to the article and approved the submitted version.

This study was funded by the Research Group for Veterinary Public Health, and the Faculty of Veterinary Medicine, Chiang Mai University, Thailand.

We thank Miss. Thareeya Rin-ut and the Central Laboratory, Faculty of Veterinary Medicine, Chiang Mai Univerisity, for the technical guidance and supports.

Copyright © 2021 Zhang, Niu, Boonyayatra and Pichpol. This is an open-access article distributed under the terms of the Creative Commons Attribution License (CC BY). The use, distribution or reproduction in other forums is permitted, provided the original author(s) and the copyright owner(s) are credited and that the original publication in this journal is cited, in accordance with accepted academic practice. No use, distribution or reproduction is permitted which does not comply with these terms.