Ovaries, which have two functions, the cyclical production of fertilizable ova and steroid hormones, are important organs for economic animals (1). Follicles are the fundamental unit of mammalian ovaries, and the complex regulation of follicular dynamics dictates the degree of prolificacy in different species (2). The process of physical contact between granulosa cells (GCs) and oocytes can aid in oocyte growth, maturation, and, ultimately, ovulation. The proliferation of GCs is elementary for follicle and oocyte development, ovulation, and luteinization (3). Many factors can promote the proliferation of GCs, including genes, transcription factors, non-coding RNAs, and hormones. BMPR-IB, a gene that is well-known for its mutation in prolific sheep, was knocked out using the CRISPR-Cas technology in goat GCs, which resulted in the higher expressions of R-Smads, LHR, and FSHR in the BMPR-IB knocked out GCs compared with those in the GCs in which BMPR-IB was not knocked out (4). Other genes were also found to play an important role in GC development, such as GDF9, BMP15, and YAP1 (5–7).

Studies have shown that miRNA as a regulator influences the development of GCs. miR-224 is a promising marker of polycystic ovary syndrome (PCOS), and the overexpression of miR-224 reduces cell expansion and expression of oocyte development-associated genes (8). miR-101-3p mimics and negative control were transfected into goat GCs, and RNA-seq was used to construct the cDNA libraries. Studies have suggested that miR-101-3p targeted to STC1 regulates the expression of STAR, CYP19A1, CYP11A1, and 3β-HSD steroid hormone synthesis-associated gene, thereby promoting the secretion of E2 and P4 (3). Additionally, miR-383 and miR-320 regulate steroid hormone secretion in GCs, whereas miR-21-5p, miR-503, miR-424, and miR-503 are involved in ovulation, follicular-luteal transformation, and luteinization (9–11). miR-324-3p is involved in various cancer development processes, which promote tumor growth by targeting DACT1 and activating the Wnt/β-catenin pathway in hepatocellular carcinoma (12). Recently, a new study demonstrated that lncRNA H1FX-AS1 targeted DACT1 and inhibited cervical cancer by sponging miR-324-3p (13). Fang et al. revealed that lncRNA SNHG22 facilitated malignant phenotypes in triple-negative breast cancer by sponging miR-324-3p and upregulating SUDS3 (14). However, the function of miR-324-3p in regulating GC proliferation remains unknown.

DENND1A, which encodes for a clathrin-binding protein that is a member of the connecdenn family and a guanine nucleotide-exchange factor, is located at 9q22.32 (15). A previous study revealed a DENND1A variant, DENND1A.V2, which was upregulated in the theca cells of women with PCOS, and reduced CYP17A1 expression and androgen secretion (16). Several studies have found that polymorphisms of DENND1A were related to an increased risk of PCOS (17, 18). Therefore, the previous studies showed that DENND1A plays a crucial role in PCOS. However, the function of DENND1A in GCs is still unknown. In our previous study, integrated analysis of miRNA–mRNA results revealed that DENND1A is a target gene of chi-miR-324-3p. Hence, we deduced that chi-miR-324-3p inhibits GC proliferation in PCOS by suppressing DENND1A expression.

This study and all the experimental procedures were approved by the Science Research Department (in charge of animal welfare issue) of the Institute of Animal Sciences and Chinese Academy of Agricultural Sciences (IAS-CAAS) (Beijing, China). Ethical approval was also provided by the animal ethics committee of IAS-CAAS (No. IAS2019-63).

Female native domestic goats, known as Yunshang black goats, were used in this study. According to their yield records (at least two-born litter size), 277 female goats (152 high yielding goat and 125 low yielding goat) with no significant differences in weight and height were grouped into either the high-yielding group (average litter size 3.00 ± 0.38) or low-yielding group (average litter size 1.32 ± 0.19) (p < 0.05). All goats were bred under the same conditions, with free access to water and feed in a goat farm located in Yunnan Province. In the follicular phase, three high-yielding (high litter size group, HF) and three low-yielding goats (low litter size group, LF) were selected from the batch of goats according to their litter size. The ovarian tissues were collected from goats, frozen immediately in liquid nitrogen, and subsequently stored at −80°C until RNA extraction.

Following previously described methods, primary goat GCs were isolated from the follicles of ovarian tissues in the follicular phase (19). The diameter of the GCs in the follicular phase was over 3.5 mm. The isolated cells were seeded in 6-mm plates and maintained in a complete medium [DMEM/F12 (1:1), 10% FBS, and 1% penicillin/streptomycin] as described by Yang et al. (20). When the cell confluence was >90%, the cells were transferred to 10-mm plates for the next experiment. 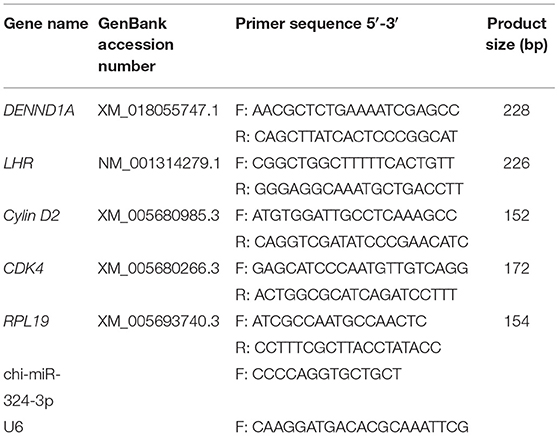 GC proliferation was quantified using an ethynyldeoxyuridine (EdU) kit according to the manufacturer's protocol (Beyotime). Cells were seeded into 96-well plates as described above. One hundred microliters of 50 μM EdU was aliquoted to each well and cells were incubated an additional 3 h. Cells were then washed with PBS and fixed with 4% paraformaldehyde for 30 min. To neutralize excess aldehyde groups, 50 μl of 2 mg/ml of glycine was aliquoted per well and incubated with cells for 15 min. Subsequently, 100 μl of 0.5% Triton X-100 in PBS was aliquoted per well and incubated with cells for 15 min. After rinsing, 100 μl of Apollo reagent was added, and the cells were incubated in the dark for 30 min at room temperature. Cells were washed with PBS and then nuclei were stained with Hoechst 33,342 reaction solution for 30 min in the dark. EdU-stained cells were visualized and quantified using a fluorescence microscope. Three fields were randomly selected for quantification and statistical analysis.

GCs were inoculated into 96-well plates with approximately 100 μl of cell suspension per well in three replicates. Cells were then incubated for 2–4 h at 37°C in an incubator, and used for subsequent experiments after cell apposition/adequate confluency was reached more than 90%. Cell proliferation assay was conducted using the Cell Counting Kit-8 (CCK-8) method (Beyotime, Beijing, China). Goat GCs were cultured in 96-well plates and measured by adding 10 μl of CCK-8 solution per well as per protocol. After the addition of CCK-8 solution, absorbance at 450 nm was measured at 0, 6, 12, 24, 48, and 72 h. 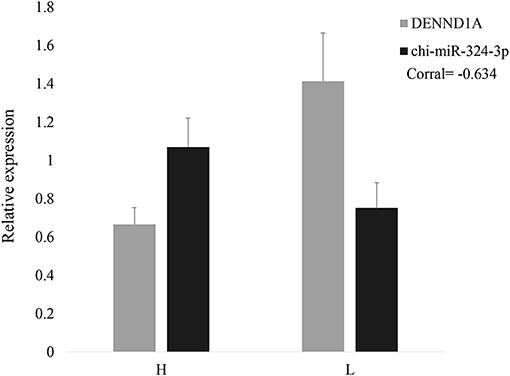 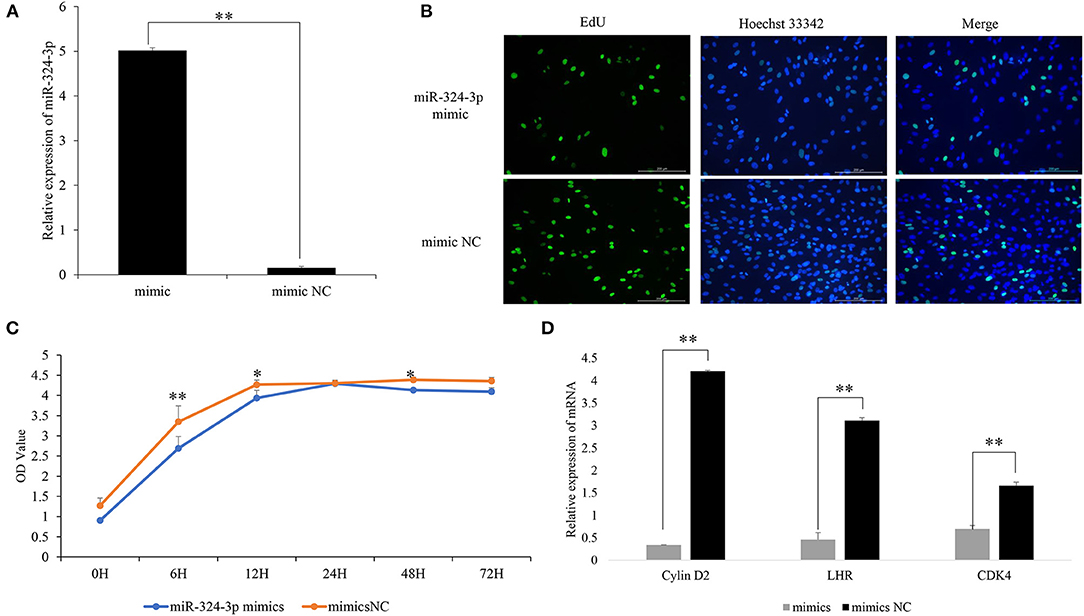 Inhibition of chi-MiR-324-3p Promoted the Proliferation of GCs 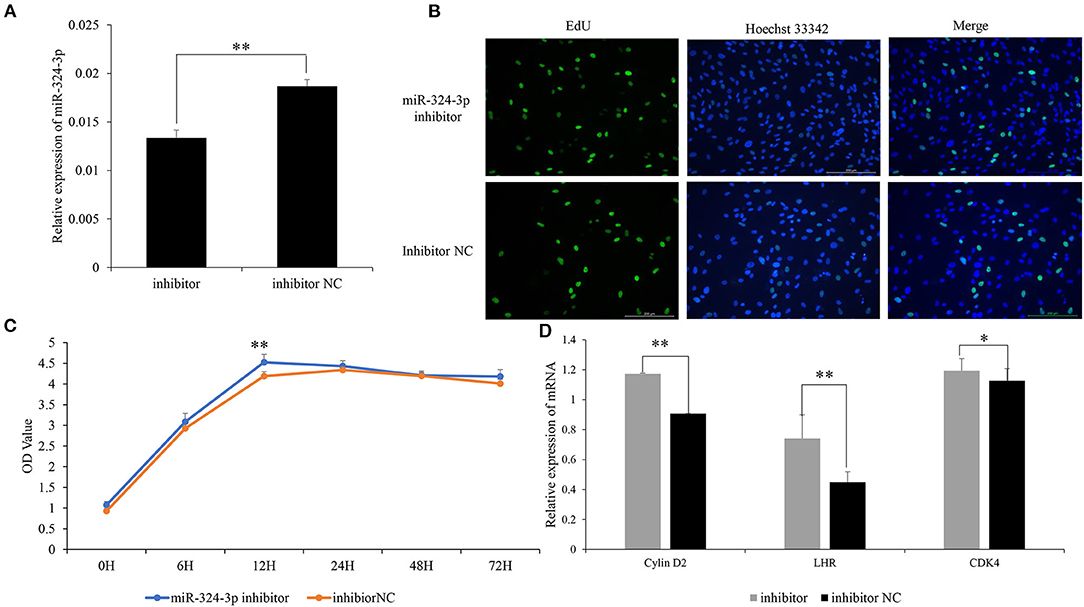 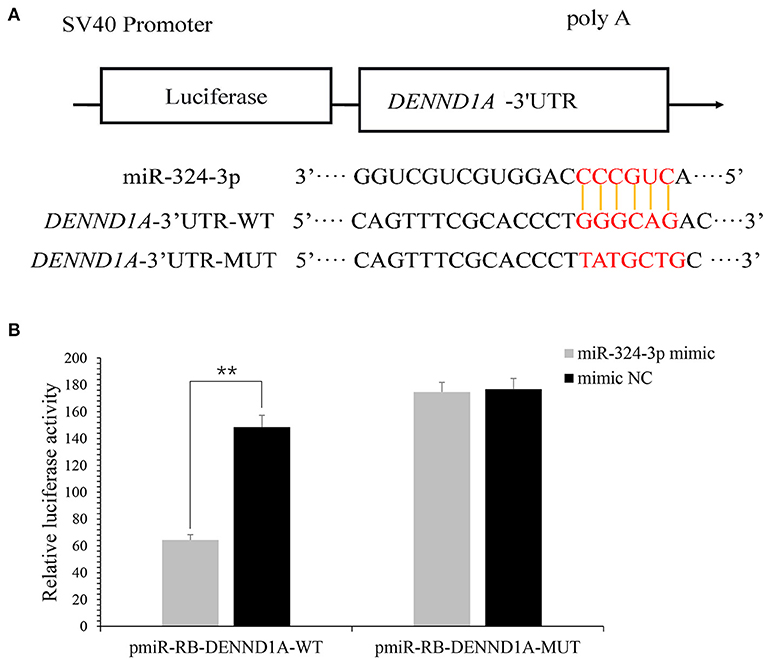 To examine the validity of the putative target, chi-miR-324-3p mimic or mimic-NC was transfected into goat GCs. RT-qPCR data revealed that the transcriptional levels of DENND1A were different between the mimic and mimic-NC groups (Figure 5). Thus, we concluded that chi-miR-324-3p directly targets the 3'-UTR of DENND1A to suppress its mRNA translation in goat GCs. 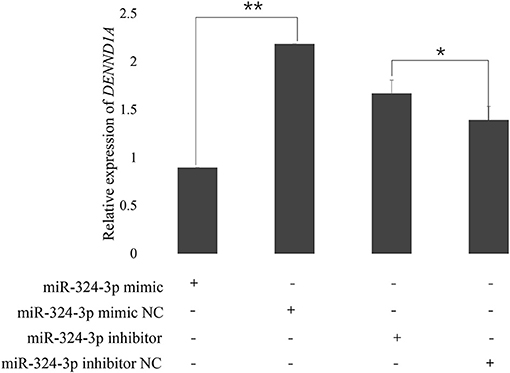 Figure 5. Expression of DENND1A in goat GCs transfected with chi-miR-324-3p mimic or mimic NC, and inhibitor or inhibitor-NC at 48 h. RPL19 was used as the reference gene. Results are representative of the mean (±standard deviation) of three independent analyses. *p < 0.05; **p < 0.01.

The key candidate gene associated with prolific traits in goats remains unknown. In our study of RNA-seq, chi-miR-324-3p and DENND1A showed differential expression levels in high- and low-yielding goats and chi-miR-324-3p was predicted to target DENND1A (data unpublished). In this study, we found and validated the function of chi-miR-324-3p in goat GCs. Our results indicated that chi-miR-324-3p regulated GC proliferation by targeting DENND1A.

The DENN domain is a common, evolutionarily ancient, and conserved protein module; there are eight families and DENND1A is a member of these. DENND1A was detected by proteomic analysis of clathrin-coated vesicles (22). Its variant is associated with hyperandrogenism and irregular menses and is a risk variant for PCOS as documented by the NIH criteria (23). DENND1A is expressed in the theca cells and testes; therefore, it may be associated with hyperandrogenism by increasing androgen levels (24). In this study, the high expression of DENND1A was associated with prolific traits in goats; chi-miR-324-3p directly acted on the 3'-UTR of DENND1A in the 293T cell line. Meanwhile, our overexpression and inhibition experiments on chi-miR-324-3p further verified that the expressions of DENND1A and chi-miR-324-3p showed opposite trends in goat GCs. Some studies have suggested that DENND1A regulates Rab GTPases, which are important for calcium regulated exocytosis in pituitary cells and for basal and GnRH-induced gonadotropin release (25, 26). Moreover, DENND1A has been reported to participate in endocytosis and receptor trafficking in the cellular membrane. Furthermore, high methylation existed in the DENND1A intron in aging oocytes (16, 27). Regardless, the effects of DENND1A on goat GC proliferation remain experimentally unclarified. Here, we provide new insights for understanding that DENND1A might be a key gene involved in goat GC proliferation that is regulated by chi-miR-324-3p. Taken together, these experimental results support the conclusion that DENND1A is involved in GC proliferation.

A previous study reported that miR-324-3p can promote the dysregulation of the expression of genes involved in cell death and apoptosis, cAMP and Ca2+ signaling, cell stress, and metabolism (28). Notably, miR-324-3p inhibition was highly and significantly correlated with cell proliferation and apoptosis. miR-324-3p, which is highly upregulated in maternal blood in the second trimester, is associated with fetal growth (29). miR-324-3p has also been reported to increase the incidence of ectopic pregnancy according to the analysis of tissues obtained from voluntarily terminated pregnancy, which has a repressive interaction with 3'-UTR of KISS1 (30). In addition, miR-324-3p overexpression in ectopic pregnancy is responsible for decreased KISS1/kisspeptin expression (31). Our previous studies have demonstrated that chi-miR-324-3p can regulate the development of ovaries in prolific goats by targeting DENND1A (data unpublished). Moreover, there is evidence that miR-324-3p plays crucial roles in ovary development and cell proliferation. Furthermore, miR-324-3p is related to SKOV3 cell viability, invasion, and migration via overexpression in ovarian cancer (32). Furthermore, a study demonstrated that miR-324-3p expression in PCOS rats is remarkably downregulated and confirmed that the overexpression of miR-324-3p represses proliferation and induces the apoptosis of GCs by targeting WNT2B (33). Using the CCK-8 assay, our results indicated that chi-miR-324-3p could inhibit goat GC proliferation, as demonstrated by the low expression of GC proliferation markers. We used goat ovaries in the follicular phase and the primary GCs as the animal material. Thus, we propose a new mechanism for the roles of chi-miR-324-3p in goat GCs.

In summary, our study reveals that chi-miR-324-3p regulates goat GC proliferation by directly targeting DENND1A. These data expand our mechanistic understanding of GC proliferation and ovary development in which miRNAs play an important role.

The animal study was reviewed and approved by the Science Research Department (in charge of animal welfare issue) of the Institute of Animal Sciences and Chinese Academy of Agricultural Sciences (IAS-CAAS) (Beijing, China) for all the experimental procedures mentioned. Ethical approval was provided by the animal ethics committee of IASCAAS (No. IAS2019-63).

This research was funded by the Agricultural Science and Technology Innovation Program of China (CAAS-ZDRW202106 and ASTIP-IAS13), the China Agriculture Research System of MOF and MARA (CARS-38), the Major Science and Technology Special Plan of Yunnan Province (202102AE090039), and the Basic Research Foundation Key Project of Yunnan Province (202001AS070002).

Copyright © 2021 Liu, Chen, Zhou, He, Tao, Jiang, Lan, Hong and Chu. This is an open-access article distributed under the terms of the Creative Commons Attribution License (CC BY). The use, distribution or reproduction in other forums is permitted, provided the original author(s) and the copyright owner(s) are credited and that the original publication in this journal is cited, in accordance with accepted academic practice. No use, distribution or reproduction is permitted which does not comply with these terms.