Surveillance and Reduction Control of Escherichia coli and Diarrheagenic E. coli During the Pig Slaughtering Process in China

In recent years, foodborne pathogenic infections have occurred frequently, which has a significant impact on human health and economy, and has become a major public health problem worldwide (1). Foodborne pathogens are the primary cause of foodborne diseases. Foodborne diseases caused by foodborne pathogens have been a major threat to food safety (2–4). With the increase in demand for fresh livestock and poultry products, an increasing amount of attention has been paid to food safety. Previous studies have shown that the number of outbreaks associated with fresh products increased from 0.7% in the 1970s to 6% in the 1990s in the United States (5, 6). According to the annual report statistics of the Rapid Alert System for Food and Feed (RASFF), the incidence of food notifications caused by pathogenic microorganisms has been fluctuating at a high level. Among the hazard category were concerned, pathogenic microorganisms were the most common hazard in meat and meat products in the years 2011–2015 (7). As a large country with high levels of pork production, pork accounts for 75% of the meat consumption in China. In recent years, domestic and foreign foodborne diseases caused by pathogenic microorganisms in pork have become very common (8–11). Quantitative microbiological risk assessment shows that slaughtering plays a significant role in the contamination of pig carcasses; therefore, it is very important to assess the microbial index in pork during the slaughter process in China (12–14).

According to reports, common pathogenic bacteria include: Salmonella, Shigella, diarrheagenic E. coli, Campylobacter, Yersinia enterocolitica, Clostridium perfringens, Vibrio and Listeria monocytogenes, etc (1). Studies have shown that in China, pork from pig slaughtering process and retail market was contaminated by various pathogenic bacteria in varying degrees, including Campylobacter (15), Shiga toxin–producing E. coli (11), Listeria monocytogenes (16), Salmonella (17), etc., which posed a great threat to people's life and health. Therefore, it is essential for the prevention and control of foodborne diseases by strengthening the public health surveillance of food-borne pathogens during animal production and formulating related hygiene specification and control standards in the process of “from farm to fork” (1).

Escherichia coli is a hygiene indicator bacteria for pig carcasses during slaughter; the level of E. coli contamination in the slaughtering process of live pigs has been found to be key to the health of the consumers. As a Gram-negative bacteria, most E. coli are generally non-pathogenic (18, 19). They are normally found living in human and animal intestines. Usually, E. coli is utilized as a hygiene indicator bacteria, reflecting the sanitary and safety status of food (20). A low amount of detected E. coli indicates that the food processing process is well-controlled and the product safety is good. In contrast, a high amount of detected E. coli indicates a poor hygiene level.

In this study, we comprehensively analyzed microbial contamination of 2,013 samples from 71 pig slaughterhouses in 14 provinces of China from 2019 to 2020 to determine the current contamination status of E. coli and diarrheagenic E. coli in slaughtered pork in the country. This study provided technical support for the sanitary quality supervision and management of the pig slaughter industry in China.

Investigation of the Sanitary Conditions of Different Types of Slaughterhouses

Cotton swab (SWAB-10, Elabscience, USA) samples (involving pre-cooling) were collected from the surface of carcasses after slaughtering. Three sampling sites (belly, ham, and jowl) were selected on each sample, and 100 cm2 of cotton swab samples were applied to each sampling site. Environmental samples comprised the surface swabs of facilities and equipment, workers' hands, utensils, and the ground that directly or indirectly came into contact with the pig carcass during the slaughter process. The collected cotton swab samples were loaded into transport medium containing 10 mL phosphate-buffered saline, stored at low temperature, and transported to the laboratory for testing within 24–48 h.

Escherichia coli counts were detected using commercial kits according to the industry standard SN/T 4547-2017, specifically using the Petrifilm E. coli test sheet (3M PetrifilmTM, USA), with reference to the instructions and the methods specified in the standard for detection. In short, 1 mL sample with appropriate dilution was added to the center of the Petrifilm plate, then slowly covering the upper film of the Petrifilm plate. After the sample was evenly covered the Petrifilm plate, place it horizontally at 36 ± 1°C and incubate for 24 ± 2 h. Record the number of blue colonies with gas on the Petrifilm plate and the corresponding dilution factor, expressed in colony forming units (CFU).

Monitoring of Escherichia coli Contamination and Assessment of Diarrheagenic E. coli Exposure in Pork Produced in Different Types of Slaughterhouses

Comparison of the Amount of E. coli Contamination, and Exposure Assessment of Diarrheagenic E. coli in Pre-cooled and Non-pre-cooled Pork

From a hygiene perspective, after pre-cooling cold fresh meat, the temperature and humidity changes of the carcass surface can deactivate the pathogenic microorganisms contaminated on the surface of the pork during the slaughter process, which better guarantees the quality and safety of the meat. Therefore, in this study, cotton swabbed samples from pork surfaces before and after pre-cooling were collected in some slaughterhouses with pre-cooling treatment for E. coli count analysis. 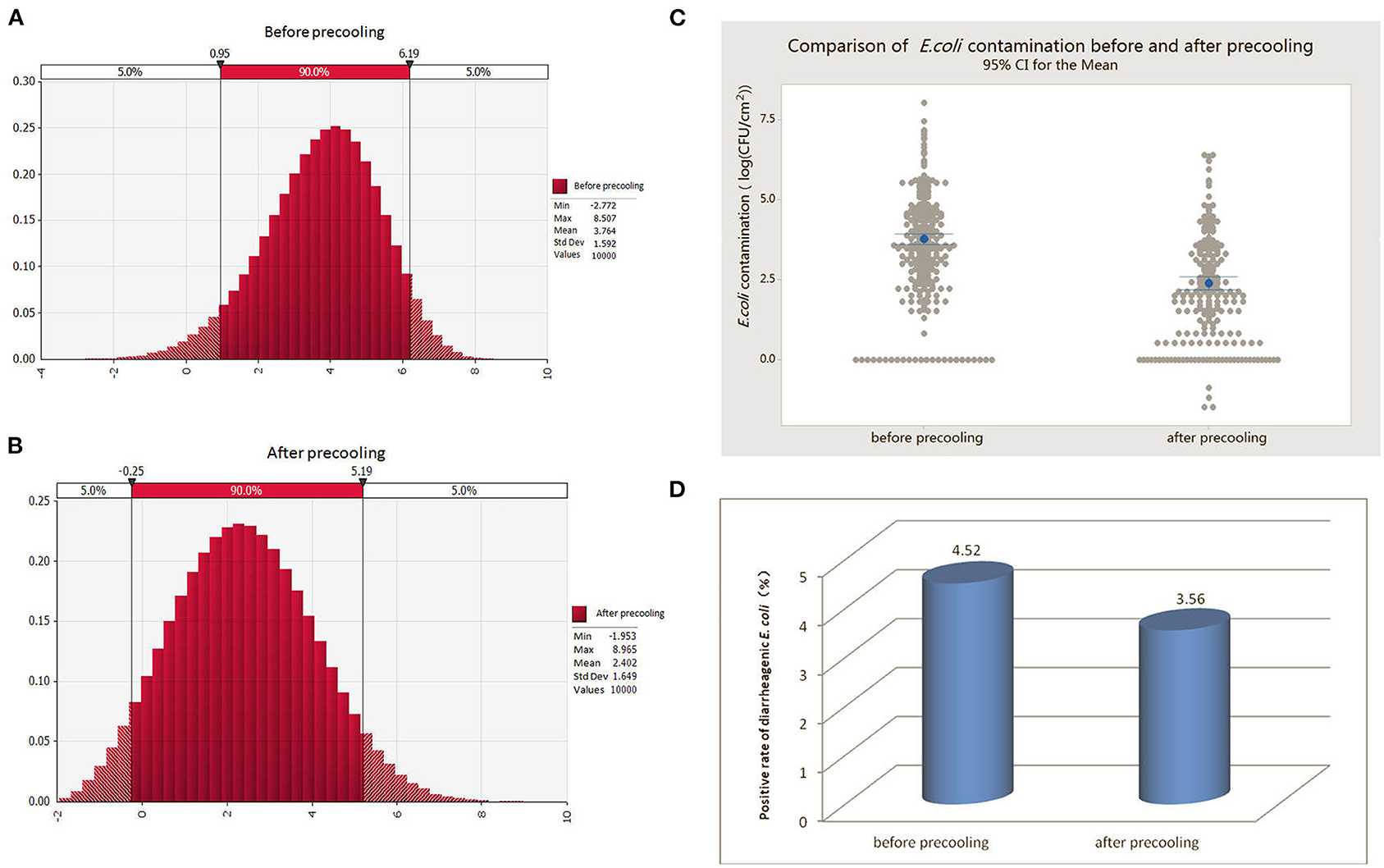 Effects of Microbiological Testing on the E. coli Contamination of Pork After Slaughter 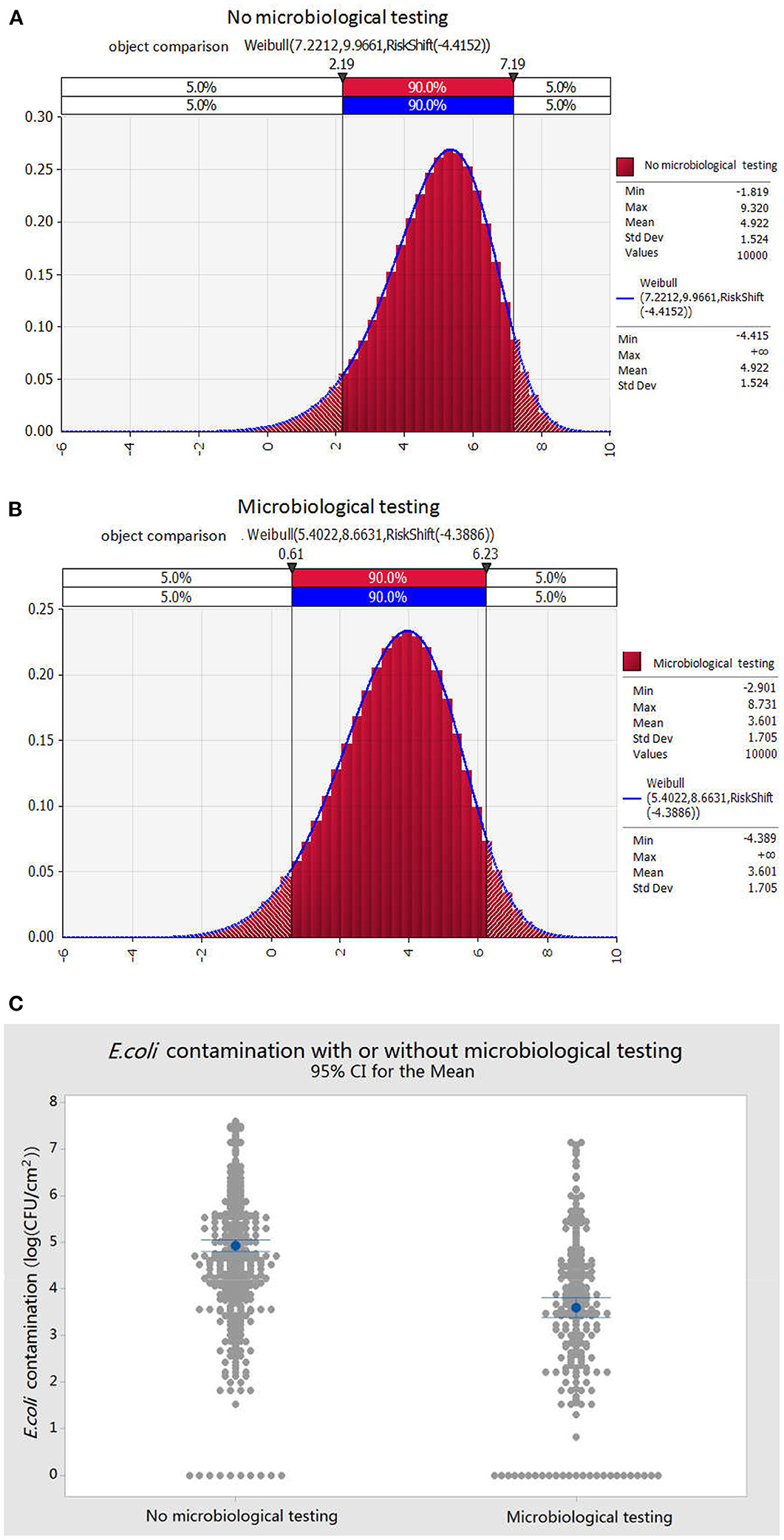 In this study, we selected pig slaughterhouses in major pig producing provinces (respectively located in East China, South China, southwest China, central China, northwest China, and northeast China) for the monitoring of E. coli, which reflects the overall hygienic situation of pig slaughtering in China at the present stage. We found that the positive detection rate of E. coli in pork after slaughtering without precooling in China is very high, reaching 97.07% overall (1,954/2,013), which is similar to the 95.81% positive detection rate before evisceration in the United States (26). However, the United States pig slaughterhouses are equipped with cold chain facilities, after pre-cooling, the positive rate of E. coli decreased to 11.78% (26). In China, large-sized slaughterhouses with cold chain facilities account for ~80% of the total number of slaughtered pigs (Table 1). However, most small- or medium-sized slaughterhouses lack cold chain facilities (55.26%, 21/38, Table 1); therefore, the pork carries a large amount of E. coli, which enters the circulation. In the sales link, this undoubtedly increases the risk of food safety incidents. In addition, the total amount of E. coli contamination in pork after precooling in China was 2.45 CFU/cm2, which was even better than the monitoring data of 4.67 CFU/cm2 in the United States in 2011 (26). In addition, the exposure assessment results showed that overall, the contamination rate of diarrheagenic E. coli generally ranged between 0 and 8.69%, with an average of 2.76%, which is lower than the surveillance results for pathogenic diarrheagenic E. coli in the United States in 2015 (5%) and the European Union in 2017 (4.4%) (23, 24).

Both Precooling and Microbiological Testing Reduced the Contamination of E. coli in Pork After Slaughtering

Research by H. Holly Wang et al. has shown that chilled meat and hot meat are the main pork types among Chinese consumers in the cities surveyed, accounting for 45 and 46%, respectively (27). The pre-cooling process can decrease the central temperature of the pork to ~4°C after slaughter. This process not only makes the pork taste better after the acid removal, but more importantly deactivates the microorganisms on the surface of the pork to ensure the safety of the meat. The average amount of E. coli contamination was 57.54 CFU/cm2 before precooling and 2.45 CFU/cm2 after precooling. Similarly, the contamination rate of diarrheagenic E. coli in pork before pre-cooling was 4.52%, which was reduced to 3.56% after pre-cooling. Thus, chilled pork will become a meat consumption trend in the future. GB/T 20551-2006 “Evaluating specification on the HACCP certification in the slaughter of livestock and poultry” (28) clearly states that the procedures for the inspection of Coliforms, Salmonella spp., and other harmful microorganisms should be established during the pig slaughter process and must meet the qualified requirements. We also found that the contamination of E. coli in pork produced in the slaughterhouses where microbiological inspection was carried out was greatly reduced. It is indicated that routine microbiological inspections in slaughterhouses had a positive effect on hygiene control and better guarantee product safety. However, in our investigations, we found that more than half of the pig slaughter companies did not carry out microbiological related testing and control, and even the companies that did this did not use a unified reference for monitoring technical specifications. Therefore, we recommend a standard operation of hygiene control in the slaughter process, effective implementation of microbial reduction measures (especially the development of microbiological inspections, etc.), establishment of a hygiene evaluation method for pig slaughter, and formulation of an evaluation index system, in order to improve slaughter hygiene, and the quality and safety of pork products.

Developed countries such as Europe and the United States place great importance on the monitoring, assessment, and prevention and control of pathogenic microbial contamination in livestock and poultry products during the slaughter process, and have successively established a strict scientific regulatory and standards system (29, 30). However, in China, gaps remain in the standards for microbial control during the slaughter process. Because the monitoring results of E. coli in large-sized slaughterhouses are comparable to those in developed countries, and the microorganisms in the slaughter process can also be effectively controlled by measures such as pre-cooling, the control standards of E. coli in the pig slaughtering process must be urgently addressed. In fact, China is also taking a series of measures to improve the hygienic control of pig slaughtering process in recent years. For example, firstly, we promotes the standardization of pig slaughterhouses, which requires microbiological monitoring; secondly, we promotes the quality and safety risk monitoring of the slaughter process, which also stipulates the monitoring of common pathogens such as E. coli and Salmonella; thirdly, the overall bio-safety prevention and control measures of the slaughterhouse under the influence of African Swine fever (ASF) have been strengthened. It is believed that the development of standards for the detection of E. coli at the slaughtering stage can directly ensure the health and safety of the pork entering the market, and is also conducive to international standards.

This work was funded by the National Key Research and Development Program of China (2018YFD0500505).

28. Standardization Administration, General Administration of Quality Supervision, Inspection and Quarantine of the People's Republic of China. GB/T 20551-2006 Evaluating Specification on the HACCP Certification in the Slaughter of Livestock and Poultry (2006).

Copyright © 2021 Wang, Liu, Gao, Liu, Huang, Zhang, Li, Zhao, Wang and Zhao. This is an open-access article distributed under the terms of the Creative Commons Attribution License (CC BY). The use, distribution or reproduction in other forums is permitted, provided the original author(s) and the copyright owner(s) are credited and that the original publication in this journal is cited, in accordance with accepted academic practice. No use, distribution or reproduction is permitted which does not comply with these terms.