Feline ureteral obstruction can cause acute kidney injury (AKI) by increasing pressure in the renal pelvis and ureters (1). The most common biochemical abnormality is azotemia, followed by hyperphosphatemia, hypercalcemia, hypocalcemia, and hyperkalemia (2–10). Medical management for AKI and uremic and electrolyte disturbances secondary to ureteral obstruction is essential (11). Relieving the obstructive process as soon as possible is the preferred method for patient stabilization, and there are several surgical methods to treat ureteral obstruction, such as subcutaneous ureteral bypass device (SUB), ureterotomy, ureteral stenting, ureteral reimplantation, ureteronephrectomy, and renal transplantation (2, 11–14). The risk of reocclusion with stent or ureter surgery is ~22%, and preliminary abstract data indicate that ~25% of cats show occlusion of the SUB device, but only 13% require intervention (4, 10, 14). Therefore, regardless of the surgical or interventional option chosen, it is important to indicate that there is a risk of recurrence of the obstruction and that further procedures may be required in the future (4, 10, 14).

This study presents the successful management and the characteristics of histopathologically diagnosed ureteral lesions in a cat with congenital ureteral obstruction and hydronephrosis based on radiography, ultrasonography (US), and computed tomography (CT).

On the US (Aplio 300, Canon Medical System Europe B.V., Zoetermeer, Netherlands), focal irregular and circumferential thickening of the ureteral wall was observed in the middle of the bilateral ureters. Thus, ureter dilation and renal pelvic dilation anterior to the site were confirmed. The pyelectasis was more severe on the right side, with 14.6 mm on the right and 4.8 mm on the left in the transverse plane (suggested normal range, ≤3 mm) (Figures 1C–F).

Since spontaneous urination was confirmed until daytime at admission to the hospital, it was not an oliguria state. Therefore, CT (Brivo CT385, GE Healthcare, Buckinghamshire, UK) scan and contrast examination were performed to further evaluate the cause of ureter obstruction and renal dysfunction. The CT scan was performed using iohexol (Omnihexol 300, Korea United Pharm Inc., Seoul, South Korea) (800 mg iodine/kg) under general anesthesia with isoflurane. The CT scans were performed before contrast injection and after contrast for 30 s, 3 min, and 10 min. In pre-contrast images, the Hounsfield unit (HU) of the focally thickened ureters was 30–45. After contrast injection, peripheral rim enhancement (HU: 140–180) was observed on the lesion after intravenous contrast injection (Figure 2).

Post-contrast images confirmed that filtration from the bilateral renal cortex to the medulla was not normally performed for 10 min even after injection of contrast medium, and bilateral renal pelvic dilation was also observed on CT images.

Since bilateral renal functions were reduced due to ureteral obstructions, surgical resolution of the obstructions was considered the most effective solution. It recommended bilateral ureterectomy and bilateral SUB surgery; however, the owner wanted single-sided SUB due to financial constraints. It was decided to remove the right kidney, which was observed as severe hydronephrosis compared to the left. Anesthesia was induced with butorphanol (Butophan Inj., Myung Moon Pharma, Seoul, South Korea) (0.2 mg/kg IV) and midazolam (Midazolam Inj., Bukwang Pharma, Seoul, South Korea) (0.1 mg/kg IV). Then, anesthesia was induced with propofol (Anepol, Hana Pharma, Hwasung, South Korea) (6 mg/kg IV), intubated, and maintained with isoflurane (Foran solution, Choongwae Pharma, Seoul, South Korea) in 100% oxygen. The focally thickened lesion in the left ureter was removed locally, and the left renal pelvis and urinary bladder were surgically connected through SUB. The right side was excised from the kidney to the ureteral lesion.

On gross examination, the right kidney was enlarged. When the kidney was dissected, the renal pelvis was severely dilated, and it was found that the cortex degenerated to yellowish (Figures 3A,C). In addition, focal nodular thickenings were observed in the middle parts of the bilateral ureters. When the areas were cut in half, they found that the surfaces of the lumens were irregularly protruded (Figures 3A,B). 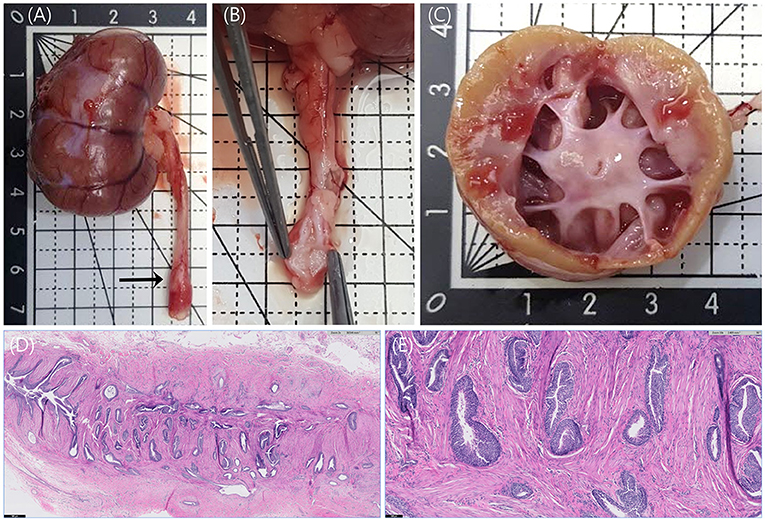 Figure 3. Anatomy of right kidney and right ureter and histopathology of right ureter stained with hematoxylin and eosin (H&E) staining. (A) The enlarged right kidney and focally thickened ureter (arrow) were observed. (B) The surface of the thickened ureteral wall was irregularly protruded. (C) When the right kidney was dissected, the renal pelvis was severely dilated, and the cortex was yellowish, unlike the normal reddish-brown color. (D) Numerous invaginated folds of uroepithelium are observed at the right ureteral malformation. H&E, ×20, Scale bar = 500 μm. (E) Invaginated folds and embedded nests of uroepithelium appear to be entrapped within the smooth muscle layer of the ureter. No epithelial dysplasia is identified. H&E, × 100, Scale bar = 100 μm.

The right kidney and bilateral ureteral lesions were histologically analyzed in the laboratory. Moderate hydronephrosis with mild lymphoplasmacytic interstitial nephritis, mild renal nephron atrophy, and interstitial fibrosis, and few retained fetal glomeruli were confirmed in the right kidney. Microscopic findings from the hematoxylin and eosin (H&E) staining were consistent with bilateral atypical papillary hyperplasia and folding of the transitional epithelium of the ureter (Figures 3D,E). This transitional epithelium is non-neoplastic and forms invaginated folds that appear to extend into the muscularis layer of the ureteral wall. No epithelial dysplasia was observed. The cross-sections of the ureter were histologically similar with the right side being more severely affected than the left. This is highly likely to be the primary congenital abnormality resulting in secondary obstruction and hydroureteronephrosis.

Figure 4. Postoperative US images of left kidney. (A) Sagittal image. (B) Transverse image. Three days after surgery, the left renal pelvic height was observed to be within 2 mm on US, and a nephrostomy tube was observed normally as two parallel lines in the renal pelvis (white arrow).

Histologically, this case was bilateral papillary ureteral transitional epithelial hyperplasia in the uroepithelium, similar to one previous study (25). However, this case was not accompanied by chronic lymphoplasmacytic inflammation in the uroepithelium. In the five cats with congenital ureteral obstruction described above, only one case of unilateral ureteral stenosis with a normal ureteral epithelium was successfully managed through ureteronephrectomy (26), three cats were euthanized due to end-stage kidney disease associated with bilateral hydronephrosis (22, 24, 25), and one cat was not treated because there were no specific clinical symptoms (23).

Although there are various causes of feline ureteral obstruction, regardless of the etiology, the pathophysiology of obstructive nephropathy on the kidneys is similar (11). When ureteral obstruction occurs, the renal blood flow and glomerular filtration rate (GFR) are reduced, which leads to renal tubular inflammation and injury, resulting in AKI (1). The degree of damage depends on the severity and duration of the obstruction and the presence of pre-existing renal disease (1, 11, 27). The earliest change seen in obstructive nephropathy is the increase in the infiltration of inflammatory cells, with macrophage and T lymphocytes predominantly increasing within 4 h of post-obstruction (28). This pathophysiology may cause renomegaly due to hydronephrosis and/or inflammatory changes, as in this case, and if the obstruction is prolonged, renal atrophy through fibrosis may occur (1, 11, 27, 29, 30). The nephropathy leads to a decrease in renal function, and therefore, the nephrographic phase time of this patient was considered to be delayed in CT scan (31).

Hyperammonemia without recognizable concurrent hepatic disease may result from increased production or excessive ammonia absorption into the venous circulation (32). In humans with normal hepatic function, the most common causes of hyperammonemia are urinary retention and infection with urease-producing bacteria (32–34). Hyperammonemia in this cat may have been caused by urinary stasis due to ureteral obstruction and infection with urease-producing organisms.

The definitive cause of ureteral stenosis is ideally based on histopathological findings related to stenosis of the ureter lumen (3). Since biopsy is not commonly performed in the feline ureter for invasive reasons, imaging tests may be helpful in the diagnosis (3, 25). Abdominal radiographs can help identify renomegaly and radiopaque calculi in the urinary tract, which are important in identifying diseases related to ureteral obstruction (11). However, there are limitations to evaluating the renal parenchyma and structures such as the renal pelvis and ureter using only radiographic examination. Antegrade pyelography provides excellent opacification of the collecting system by injecting a contrast medium into the renal pelvis (35). However, this invasive procedure has risks, such as hemorrhage, focal damage of renal tissue, and secondary infection (36). The abdominal US can help identify hydronephrosis and hydroureter and is useful in identifying the location, pattern, and cause of urinary tract obstruction (2, 25, 26). However, it may be difficult to identify distal ureteral obstruction by US (26), and not all calculi may be confirmed by radiographic and ultrasound examinations (2). Thus, it may be helpful to determine the overall structure through advanced imaging examinations such as CT (2). However, since CT also carries burdens on anesthesia, cost, and radiation exposure, examinations through radiography, US, and CT can be complementary imaging examinations.

A limitation of this case report was that urine culture was not performed prior to antibiotic use. Although no specific organism was detected in the urine culture test the day after the first visit, the effect of the antibiotic used on the first visit or the difficulty of the accurate test due to the low urine specific gravity cannot be excluded (37). Hyposthenuria (urine-specific gravity in young cats <1.017) can be caused by central or nephrogenic diabetes insipidus or conditions that interfere with the concentration of urine, such as hypercalcemia, sepsis, and hepatic disorders (38, 39). The hyposthenuria in this cat may have resulted from interference with the action of antidiuretic hormone (ADH) due to hypercalcemia.

Ethical review and approval was not required for the animal study because authors declare no IACUC or other approval was needed. Written informed consent was obtained from the owners for the participation of their animals in this study.

MK and HY: conception, design, and drafting the article. MK, SK, and HY: acquisition of data. MK, KL, and HY: analysis and interpretation of data. All authors contributed to the article, revising article for intellectual content, final approval of the completed article, and approved the submitted version.

Copyright © 2022 Kwon, Kim, Lee and Yoon. This is an open-access article distributed under the terms of the Creative Commons Attribution License (CC BY). The use, distribution or reproduction in other forums is permitted, provided the original author(s) and the copyright owner(s) are credited and that the original publication in this journal is cited, in accordance with accepted academic practice. No use, distribution or reproduction is permitted which does not comply with these terms.