H3N2 canine influenza virus (CIV) emerged in dogs in China or Korea around 2005 and was first reported in 2008. In 2015, H3N2 CIV was detected in the United States and caused a huge outbreak. To date, H3N2 CIV is continuously circulating in dog populations in China, Korea, and the United States. For continuous monitoring of H3N2 CIV in China, we collected 180 dog nasal swab samples and 196 cat nasal swabs from veterinary hospitals in Guangdong Province between 2018 and 2021. Six emerging H3N2 CIV strains were isolated. Following full genome sequencing and phylogenetic analyses, we found that A/canine/Guangdong/1-3/2018 and A/canine/Guangdong/1-3/2021 diverged from the reported sequences of the Chinese H3N2 CIV strains. Moreover, we found that these H3N2 CIV strains belong to the group that contains US and northern China CIV strains in 2017 and 2019 and dominate in the dog population until 2021.

Influenza is a highly contagious and acute infection that usually occurs in the upper respiratory tract and has been detected in many vertebrate hosts worldwide. The recognized “mixing vessel” hosts for human influenza A virus (IAV) include pigs and birds, but recent data suggest that dogs and cats may also play such roles. As human companion animals, dogs and cats are exposed to the risk of influenza virus infection.

Although a few epidemiological and experimental infection studies in the 1970s indicated that dogs could be infected with IAV, the IAV strain was not isolated from dogs until 2004. This virus is now known as canine influenza virus (CIV), which is responsible for canine influenza (CI), a respiratory disease with the clinical features of cough, sneeze, fever, and nasal discharge in dogs (1, 2). CIV was classified into H3N8 and H3N2 subtypes, which were derived from interspecies transmission of equine and avian influenza virus, respectively. H3N8 CIV was first documented in the United States in 2004 and was later found in the United Kingdom and Australia (3–5). H3N2 CIV was first reported in Korea in 2007. Subsequently, H3N2 CIV was also reported in China by our laboratory, indicating that this virus was circulating in the Chinese dogs in 2006 (6, 7). In 2015, H3N2 CIV emerged in the United States, causing a huge outbreak. Sequencing results and further analysis indicated that the virus might be introduced from Korea. In China, H3N2 CIV was detected in different dog populations, including pet dogs, farmed dogs, stray dogs, and even in Tibetan mastiffs, with a broad geographical distribution from southern China to northern China (7, 8). The RNA polymerase of IAV lacks proofreading ability, and IAV mutates and evolves continually, which could also be observed in CIV.

The cross-species spread of influenza viruses is an ongoing public health threat. Dogs and cats are vulnerable to a variety of influenza virus strains and lead to symptoms of varying degrees and viral shedding, and coinfection may lead to genetic recombination between virus strains. Dogs and cats, as companion animals, may become vectors for the spread of influenza virus among family members and may become a source of a new influenza pandemic, posing potential public health problems. Therefore, it is important to investigate and genetically characterize IAV in cat and dog infections. In this study, we collected 180 dog nasal swab samples and 196 cat nasal swab samples from sick dogs and cats in China from 2018 to 2021, detected 11 CIV-positive samples in dog nasal swab samples, and successfully isolated 6 strains of H3N2 CIV.

From 2018 to 2021, 180 dog nasal swab samples and 196 cat nasal swab samples from sick dogs and cats with respiratory disease were collected in veterinary hospitals in Guangdong Province in southern China. We collected two tubes for each nasal swab, and each tube contained 1 mL of normal saline. After collection, these samples were immediately stored at −80°C for further use. 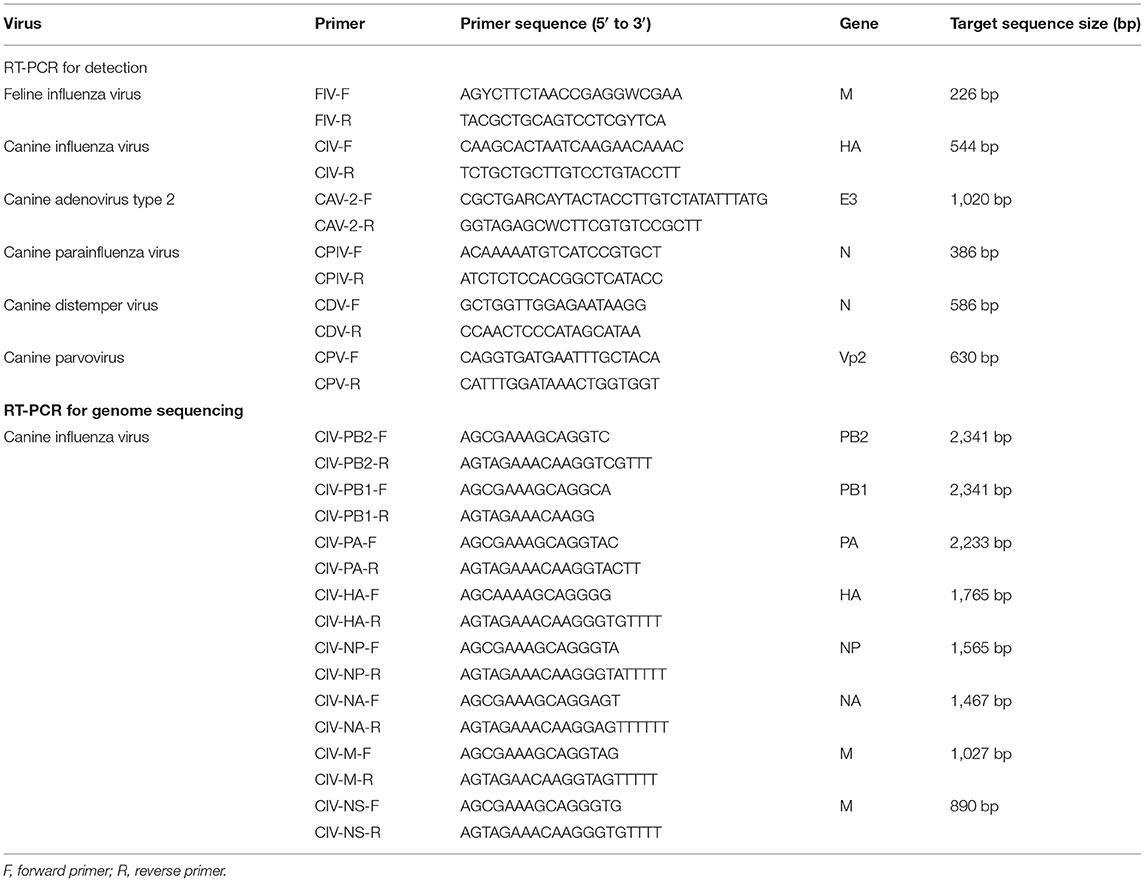 The viral genome was obtained by PCR using universal primers targeting each segment of CIV. The primers used for genome sequencing are listed in Table 1. The DNA fragments with the expected size on 1% agarose gel electrophoresis were purified and then cloned into pCloneEZ-blunt (Clone Smarter, USA) and sequenced (BGI, China), and introduced into Escherichia coli DH5α-competent cells (Weidi, China) by transformation and sequenced.

After culturing for 12 h, bacterial clones were picked and identified by PCR; the positive E. coli clones were identified and sent for sequencing. Using the BLAST tool in the NCBI database, the sequence data were analyzed to confirm whether the sequenced E. coli clones contained the nucleotide sequence of CIV. The raw sequencing data were assembled and processed using SeqMan 7.1.0 and then aligned with other H3N2 CIV strains from China, the United States, and Korea using BioEdit 5.0.7.0. A comparison between their HA and NA proteins was performed. A comparison between their HA and NA proteins was performed. After estimation by “Find Best DNA Models,” phylogenetic trees were established with MEGA 6.0 using the maximum likelihood method with JTT+G model, based on the bootstrap values of 1,000 replicates.

From 2018 to 2021, a total of 276 nasal swabs were collected from sick dogs and cats with respiratory disease in pet hospitals in Guangdong Province, southern China. We detected 11 nasal swab samples (6.11%) from positive dogs by RT-PCR, of which three were positive samples detected as CIV RNA/antigen-positive and were collected from different veterinary hospitals. To determine whether there was coinfection with other respiratory viruses, positive samples were detected for CDV, CPV, CAV-2, and CPIV by PCR. However, we did not detect the presence of other viruses in these nasal swabs. Moreover, we did not detect IAV RNA in 196 cat nasal swabs.

Table 2. Information on the samples collected from dogs in this study.

Molecular Characteristics of the H3N2 CIV 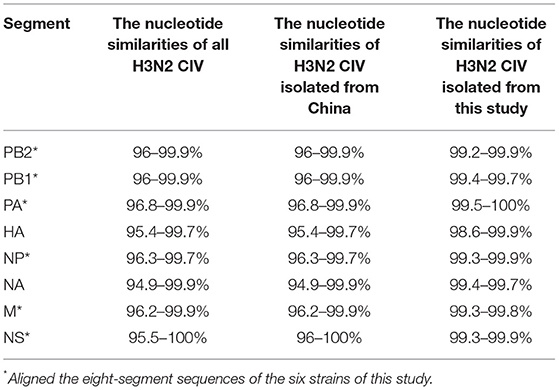 Phylogenetic Analysis of the H3N2 CIV

To clarify the origin of these viruses, we conducted phylogenetic analyses of the HA and NA genes (Figures 1, 2). Based on the phylogenetic analysis, we found that the HA and NA genes of H3N2 CIV can be divided into four groups: group A is Chinese CIV strains, group B is Korean CIV strains, group C is mainly American strains and northern China strains in 2017, and group D is mostly American strains and domestic strains isolated after 2018. Furthermore, the HA and NA proteins of A/canine/Guangdong/1-3/2018 and A/canine/China/Guangdong/1-3/2021 were divided into group D, which was closely related to the A/canine/Ontario/NCFAD-2018-070-16/2018 strain and Chinese strains after 2018. In addition, the A/canine/Guangdong/1-3/2021 strain formed a separate branch, which is far from the H3N2 CIV isolates reported in China before 2018. The NA gene of H3N2 CIV isolated in this study was also grouped into US H3N2 CIV isolates and far from the H3N2 CIV isolates reported in China. 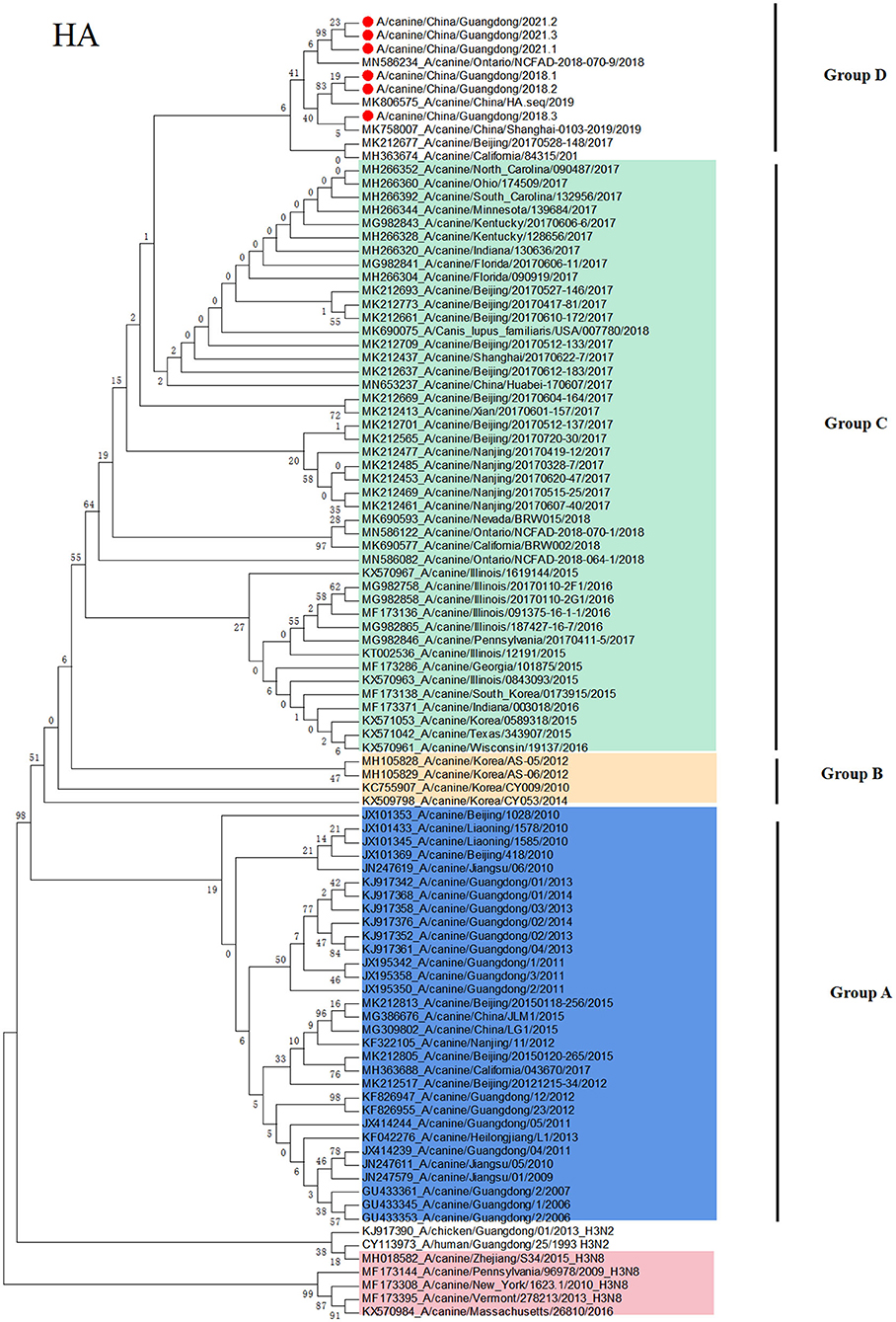 Figure 1. Phylogenetic analysis of H3N2 CIV based on the HA protein. Colors indicate H3N8 CIV (red) and isolates from different geographical regions of H3N2 CIV originating from the United States (green), Korea (yellow), and China (blue). The six Chinese strains sequenced in this study are indicated by red circles. 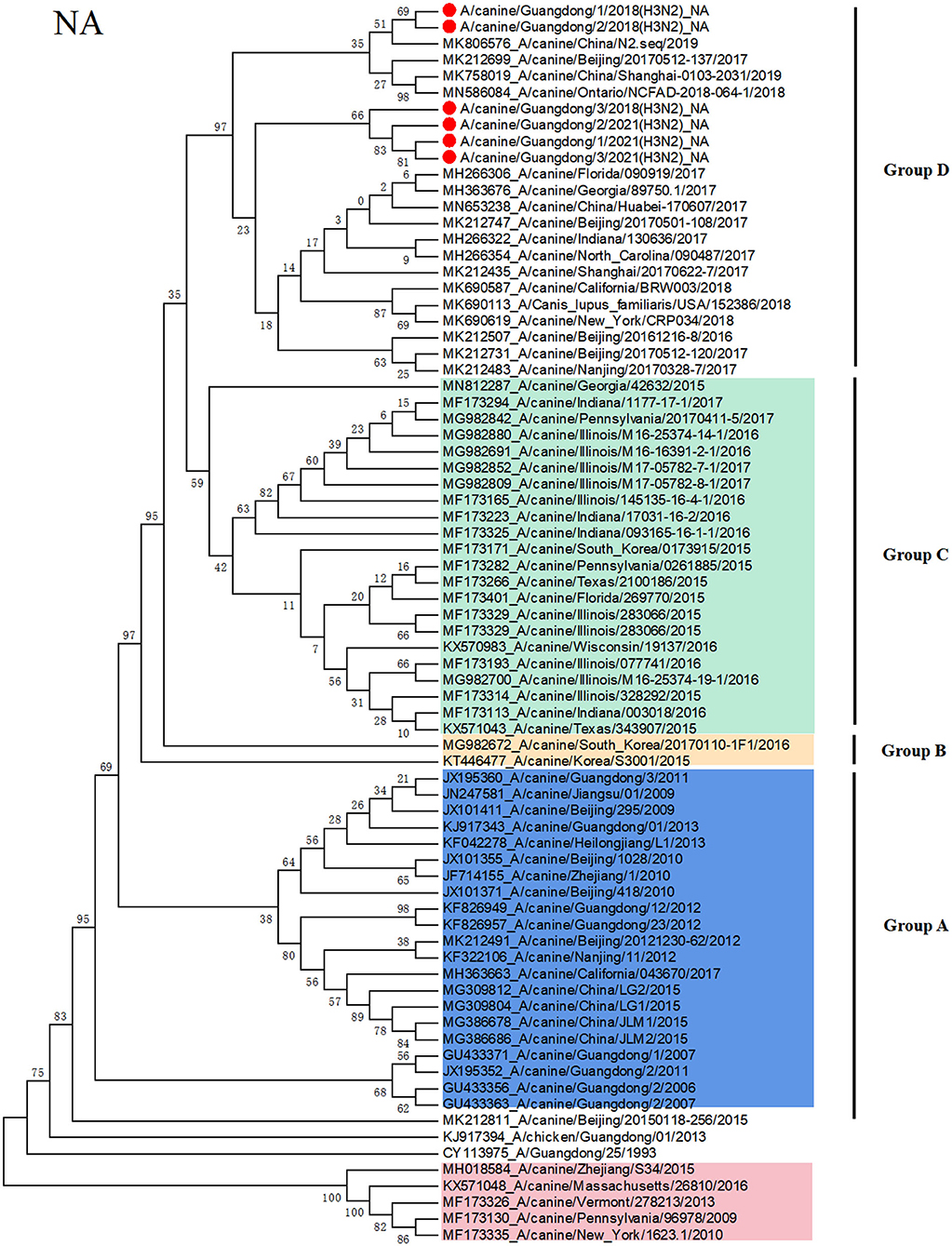 Figure 2. Phylogenetic analysis of H3N2 CIV based on the NA protein. Colors indicate H3N8 CIV (red) and isolates from different geographical regions of H3N2 CIV originating from the United States (green), Korea (yellow), and China (blue). The six Chinese strains sequenced in this study are indicated by red circles.

Since 2006, Chinese H3N2 CI strains have always belonged to unique branches, and there is no evidence of invasive US strains. However, in this study, we isolated emerging H3N2 CIV strains from sick dogs in China, and nucleotide identity analyses revealed that H3N2 CIV A/canine/Guangdong/1-3/2018 and A/canine/Guangdong/1-3/2021 are divergent from reported sequences in China before 2018. None of the six dogs and owners have been abroad and leaving Guangdong province in 2018, and the owners walk the dog at least once a day. However, we did not detect any influenza virus in cat nasal samples in Guangdong Province. In order to avoid the problem of primer specificity, we later also used CIV primers to detect 196 cat nasal swab samples, and the results were the same as before. Moreover, we have also verified that FIV primers can detect H3N2 FIV strains in our laboratory. As the three strains CIV of 2021 are from the same region and their HA and NA sequences are highly homologous, we amplified eight CDSs of one strain and only HA and NA of the other two strains. In addition, through phylogenetic analyses of the HA and NA genes, we found that the HA and NA genes of H3N2 CIV A/canine/Guangdong/1-3/2018 and A/canine/Guangdong/1-3/2021 were grouped in US isolates and far from Korean and Chinese isolates. Although the northern China strains in 2017 are classified into the same clade as the US isolates, A/canine/Guangdong/1-3/2018 and A/canine/Guangdong/1-3/2021 are classified into the same clade with US isolates A/canine/Ontario/NCFAD-2018-070-9/2018 and northern China isolate strains in 2017 and 2019. It is not ruled out that these strains may have evolved from northern China and are evolving in the same direction as the strains in the United States. Furthermore, these emerging H3N2 CIV strains in Guangdong had unique amino acid substitutions of HA and NA amino acid sequences compared with other Chinese isolates and US isolates. Although there was no mutation in the antigenic site, these strains were transmitted for some time, and some amino acid positions of the antigen protein changed.

In China, the prevention and control of CIV and FIV are relatively weak; most owners are not aware of the existence of the virus, and most people complain about the cost of pet hospitals. Moreover, there is still a lack of commercial vaccines, antibodies, and targeted drugs for CIV and FIV. Pet hospitals can only provide symptomatic treatment and broad-spectrum antiviral treatment for dogs and cats instead of specific treatment options. This has undoubtedly increased the difficulty of our treatment, investigation, prevention, and control of CIV and FIV.

In conclusion, in this study, we isolated six emerging H3N2 CIV strains and sequenced their genome sequences of the H3N2 CIV strains, A/canine/Guangdong/1-3/2018 and A/canine/Guangdong/1-3/2021, from China, which are divergent from the reported sequences of Chinese H3N2 CIV strains and grouped into US isolates. Although there was an outbreak of CIV infection in northern China in 2017, we did not detect CIV in dogs during the 2017 CIV outbreak. In addition, from the phylogenetic tree of HA protein, the GD strains and the US strains were separated into a single strain, and the Chinese strain in 2017 was farther in genetic distance. This clade could have originated from H3N2 CIVs circulating in the US and southern China strain. Moreover, no China strains belonging to group D known before 2016 were detected and dominant in the dog population until 2021. Most Asian countries such as Japan and Thailand have continuous detection of CIV, but they presented many gaps of sequence information as they just detected only the genome sequences and did not characterize CIV strains in their country (14, 15). It is suggested that we should facilitate the informative data of the CIV diversity and requested intensive monitoring and strengthen the monitoring of disease in dogs during cross-border transport and continue to monitor the CIV in China for a long period of time to observe the recombination of domestic and foreign strains. It is also important to monitor whether the coexistence of the two origin viruses has a greater impact on dogs; this requires further research.

Copyright © 2022 Ou, Zheng, Cheng, Ye, Ye, Jia, Lu and Li. This is an open-access article distributed under the terms of the Creative Commons Attribution License (CC BY). The use, distribution or reproduction in other forums is permitted, provided the original author(s) and the copyright owner(s) are credited and that the original publication in this journal is cited, in accordance with accepted academic practice. No use, distribution or reproduction is permitted which does not comply with these terms.