Objective: To evaluate the most common locations of hemorrhage in dogs diagnosed with anticoagulant rodenticide intoxication.

Procedures: Medical records were searched from the years 2010 through 2020 and all records from dogs treated for hemorrhage secondary to anticoagulant rodenticide intoxication were reviewed. Dogs were diagnosed with anticoagulant rodenticide intoxication based on the combination of known exposure and prolonged coagulation testing, including prothrombin and activated thromboplastin time, or based on gas chromatography-mass spectrometry (GCMS). The diagnosis of hemorrhage was made based on physical exam findings, point-of-care ultrasound findings or radiography.

Results: Sixty-two dogs met the inclusion criteria and were included in the study. The most common sites of hemorrhage included: pleural space (hemothorax 37%), pulmonary parenchyma (24%), abdomen (24%), skin/subcutaneous (21%), gastrointestinal tract (18%), pericardium (13%), oral cavity (13%), nasal cavity (11%), ocular (8%), and urinary tract (7%). Overall, forty-five dogs (73%) had evidence of cutaneous or mucosal hemorrhage while thirty-three (53%) of dogs had evidence of cavitary hemorrhage. Forty-five percent of dogs had hemorrhage noted at only one site, while 55% experienced hemorrhage at more than one site. The location of hemorrhage and total number of hemorrhagic sites was not associated with survival or transfusion requirement.

Conclusions and Clinical Relevance: In conclusion, this study highlights that dogs with anticoagulant rodenticide intoxication present with diverse locations of hemorrhage and the majority of dogs had non-cavitary hemorrhage noted.

Statistical analyses were performed using commercially available software (R version 4.0.3, R Foundation for Statistical Computing, Vienna, Austria). The relationship between survival rate and the number of bleeding locations was evaluated by logistic regression. To assess the effect of each bleeding site on the survival rate, univariate logistic regressions were performed. Similar analyses were performed for the relationship between transfusion and the number of bleeding sites. These effects were considered statistically significant for P-values < 0.05.

Seventy-three records were reviewed and sixty-two dogs met the inclusion criteria based on prolongation of prothrombin time (PT) in combination with known exposure or witnessed ingestion or based on GCMS testing. Five dogs were diagnosed based on GCMS while the remaining fifty-seven dogs were diagnosed based on the combination of known access/exposure or witnessed ingestion and prolongation of clotting times. Each patient's presenting complaint and location of hemorrhage were recorded including number of sites of hemorrhage. Other variables collected included: blood products administered and survival to discharge. 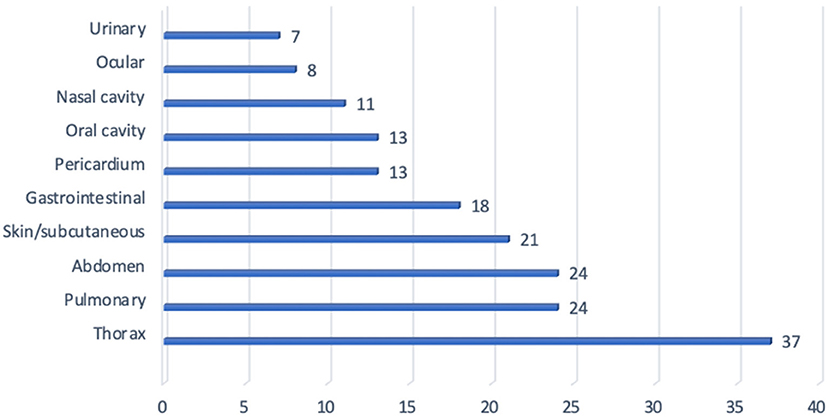 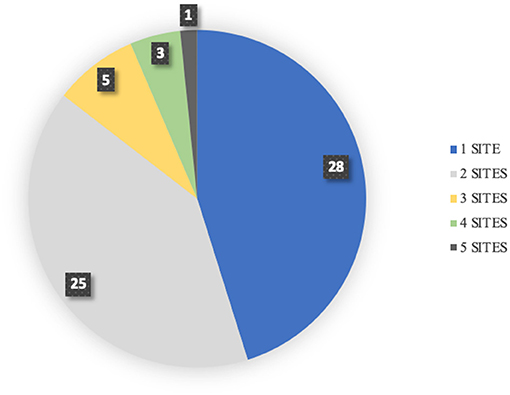 In this study, hemorrhage occurred at multiple sites including: thorax, abdomen, skin/subcutaneous tissue, gastrointestinal tract, oral cavity, nasal cavity, eyes and urinary tract. Hemorrhagic pleural effusion, with a diagnosis of hemothorax, was the most prevalent single site of hemorrhage (37%), however, when assessing the overall results, 73% of dogs had evidence of cutaneous or mucosal hemorrhage in contrast to 53% of dogs with evidence of cavitary hemorrhage. While cutaneous and mucosal hemorrhage is often considered to be associated with a defect in primary hemostasis (thrombocytopenia or thrombocytopathia), cutaneous and mucosal hemorrhage may be secondary to defects in secondary hemostasis, including anticoagulant rodenticide intoxication (19). In this study, non-cavitary hemorrhage was the most predominant category of hemorrhage in regards to overall sites of hemorrhage, 60% and also present in 73% of cases presenting for anticoagulant rodenticide intoxication.

In this study, the prognosis for patients who presented for anticoagulant rodenticide toxicity and clinical hemorrhage was excellent with 87% patients surviving to discharge, which is similar to previous reported survival of 83% (5). The location of hemorrhage and number of sites hemorrhaging did not correlate with survival to discharge. Of the patients that did not survive four dogs were euthanized and four died. Of the four that were euthanized, three were euthanized due to financial concerns while one dog was euthanized due to guarded prognosis secondary to the severity of pulmonary compromise and pulmonary hemorrhage.

Limitations of our study include the retrospective nature of the study design, which did not allow for standardization in diagnosis or treatment of patients with suspected anticoagulant rodenticide toxicities. Additionally, the inclusion of patients only with known history of ingestion or patients whose owners chose to have gas chromatography mass spectroscopy testing run is a limiting factor as it may have excluded patients from the study leaving a small number of patients included in this study. While reasons for euthanasia were evaluated based on retrospective review of records the nature of this study makes full elucidation of outcome difficult.

The data analyzed in this study is subject to the following licenses/restrictions: Medical records were retrospectively reviewed. Requests to access these datasets should be directed to rwalton@iastate.edu.

Copyright © 2022 Stroope, Walton, Mochel, Yuan and Enders. This is an open-access article distributed under the terms of the Creative Commons Attribution License (CC BY). The use, distribution or reproduction in other forums is permitted, provided the original author(s) and the copyright owner(s) are credited and that the original publication in this journal is cited, in accordance with accepted academic practice. No use, distribution or reproduction is permitted which does not comply with these terms.