Studies evaluating the prognostic utility of lactate in cats are limited. This may be due in part to concerns that stress can induce hyperlactatemia in healthy cats affecting its reliability as a biomarker (15). However, this point remains controversial as a recent study found that the lactate concentration was not affected by struggling during venipuncture, venipuncture site, age, sex, or time after admission in healthy cats, suggesting it may have value as a prognostic indicator in this population (16). Furthermore, hyperlactatemia has been shown to be significantly associated with abnormal perfusion parameters in cats evaluated by an emergency service (17).

Hyperlactatemia has been associated with specific disease states and outcomes in multiple species (2). To these authors' knowledge, admission and serial lactate measurements have not been evaluated as a predictor of survival or length of hospitalization in cats presented with respiratory distress secondary to underlying cardiac or respiratory disease.

The medical record database of the University of Tennessee Veterinary Teaching Hospital was searched to identify cats that were admitted on an emergency basis to the ICU and placed in the oxygen cage over a 22-month period (January 2019 to October 2020). To be eligible for inclusion in this study, cats that were presented in respiratory distress were required to have had an admission, blood lactate concentration measured, as well as diagnostic imaging [i.e., thoracic radiographs, thoracic CT, echocardiogram, Thoracic Point of Care Ultrasound (T-POCUS)] to confirm the underlying cause of their respiratory distress. Cats were excluded when the underlying cause of respiratory distress could not be clearly categorized as respiratory or cardiac in origin.

Continuous variables were assessed for normality by the Shapiro-Wilk test. Normally distributed parameters were reported using mean and standard deviation. Median and range were used for non-normally distributed parameters. The Mann–Whitney U-test was used to compare between two groups, and the Kruskal-Wallis test was used to compare among more than two groups. The Spearman rank correlation was used to assess the correlation between two continuous variables. Association between two groups of categorical data was evaluated using the Chi-square test or Fisher's Exact test. The logrank survival analysis was performed to further explore whether blood lactate concentration affects the survival distribution of the duration of hospital stay. The robust regression was used to further explore the significant correlation between the percentage change of lactate (predictor) and the length of stay days (dependent variable). Values of p ≤ 0.05 were considered significant for all comparisons. SAS software, version 9.4, release TS1M6 was used for all the analyses. 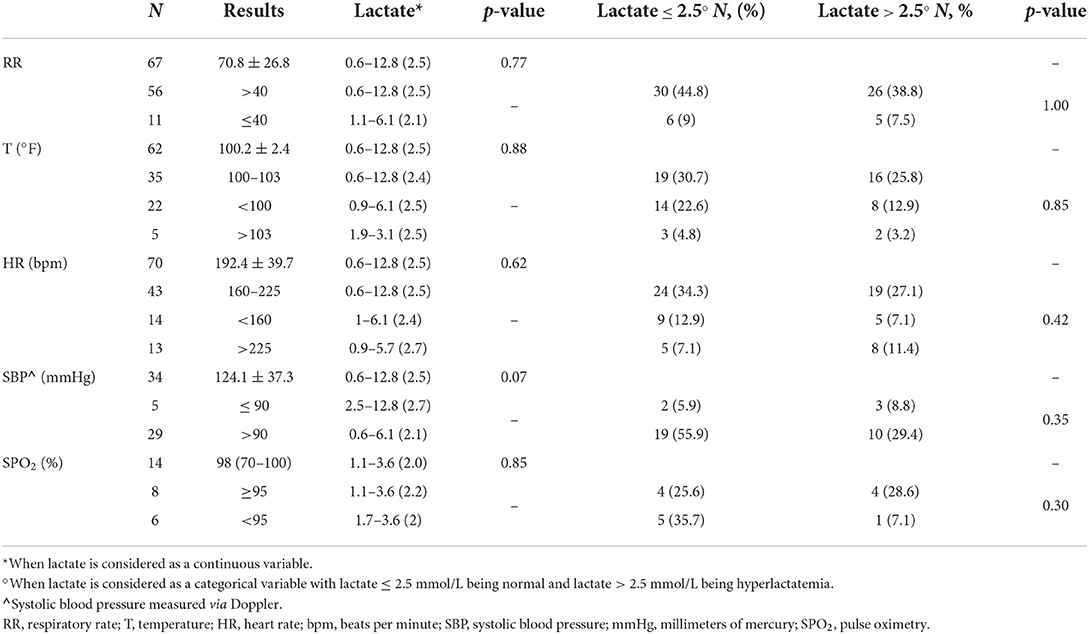 Table 1. Vital parameters and admission lactate concentration (mmol/L) in a population of 71 cats presented in respiratory distress to the emergency room. 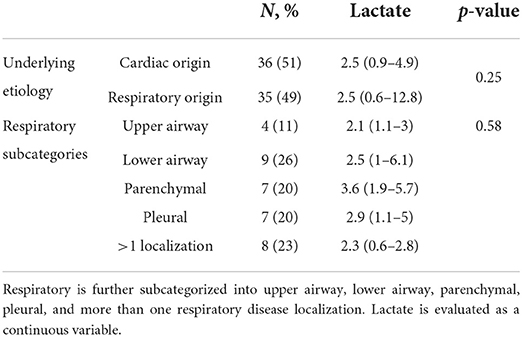 Prognostic utility of recheck lactate and lactate clearance during hospitalization

Unlike the 2015 study by Reineke et al., none of the evaluated vital parameters were found to correlate with hyperlactatemia (17). Such a difference might be explained by the different feline populations evaluated in each study. While we focused on cats with underlying respiratory and cardiac diseases, Reineke et al. included cats with a variety of underlying diseases [renal, gastrointestinal, endocrine, neoplasia, trauma, sepsis/SIRS, cardiovascular, neurologic, hepatic, respiratory, other (anemia, toxicity, anaphylaxis, unknown)] with only nine cats being classified as having respiratory (n = 2) or cardiac diseases (n = 7) (17). Moreover, Reineke et al. prospectively evaluated perfusion parameters, including mucous membrane color, capillary refill time, peripheral pulse quality, heart rate, rectal temperature, and systolic blood pressure, finding significantly higher admission lactate concentration in cats with hypothermia, white mucous membrane, abnormal peripheral pulse quality, and hypotension (17). Due to the retrospective nature of our study and the subjectivity of parameters, such as mucous membrane color and CRT, we elected to not submit that data for statistical analysis. The lack of correlation between evaluated vital parameters and lactate concentration in our study may also be attributable to the smaller number of cases in the categories Reineke et al. found to be significant. For example, while Reineke et al. had 43 cats with a systolic blood pressure <90 mmHg, only five cats included in our study were hypotensive, which might have introduced type II errors in our analysis. We also considered the respiratory rate and pulse oximetry as we focused on cats presented with respiratory distress. Previous studies have demonstrated that severe hypoxemia (PaO2 25–40 mmHg, SpO2 <75%) is necessary before lactate concentration begins to rise (20, 21). Thus, it is not surprising that no correlation was found between lactate concentration and oxyhemoglobin saturation in this population of cats as only 2/14 had an SPO2 ≤ 75%. This last finding should however be interpreted cautiously due to limited number of cats with a SpO2 reported. Further prospective studies with a consistent recording of pulse oximetry and/or arterial blood gas are encouraged to further evaluate a possible correlation between lactate concentration and oxygenation.

In our population of cats presented in respiratory distress with underlying respiratory or cardiac diseases, admission lactate concentration was not associated with survival or duration of hospitalization. In contrast, lactate clearance was significantly associated with survival. Similarly, Saint-Pierre et al. found lactate clearance to be significantly associated with survival in 444 cats presenting to the emergency room (14). However, our finding should be interpreted cautiously as survivors had a lactate clearance of 19.5 ± 47.6 and non-survivors had a lactate clearance of 50.4 ± 27.3. One would expect survivors to have higher lactate clearance than non-survivors and not the opposite as demonstrated in our study. The significance of this finding is unknown and might be related to a type II error due to the limited number of patients in the non-survivor group. A significant association with length of hospitalization was identified, where a 1% increase in lactate concentration was correlated with an increased length of hospitalization by 11.4 min. While statistically significant, this finding lacks clinical significance. Such findings add more controversy to the literature on the prognostic utility of lactate in the feline population. It should be noted that our results cannot be compared to the majority of previously published studies on the prognostic utility of lactate in cats as a variety of underlying diseases were then considered (14, 17, 18). One study evaluating 55 cats with congestive heart failure also did not find an association between admission hyperlactatemia and survival (22). Of interest, the authors report a median (range) admission lactate of 2.4 (0.4–8.1), which is comparable to the admission lactate concentration obtained in our population of cats with cardiac disease [2.5 (0.9–4.9)] (22).

In the present study, admission lactate was not significantly associated with the underlying etiology for respiratory distress (i.e., cardiac vs. respiratory). Interestingly, while Redavid et al. included a heterogeneous population of cats, patients were subcategorized based on diseased system (i.e., respiratory, cardiovascular, renal …), 5/123 (4.1%) of which had respiratory diseases and 5/123 (4.1%) had cardiovascular diseases (18). Despite a limited number of cats in these sub-categories, the authors also did not find an association between the primary disease, lactate concentrations, and survival. Similarly, Saint-Pierre et al. did not find admission lactate concentration to be significantly associated with underlying disease in 444 cats presenting to the emergency room (14). While the total number of cats with the underlying respiratory and cardiac disease was not reported in this last study, 13/231 (6%) of cats had a respiratory disease and hyperlactatemia and 20/231 (9%) had cardiac disease and hyperlactatemia. This seems to indicate that, admission lactate concentration is unlikely to help predict the likelihood of respiratory vs. cardiac disease in cats presenting in respiratory distress. Previous studies in humans and animals suggest that severe hypoxemia is necessary to produce an increase in anaerobic metabolism (20, 21). Thus, the degree of hypoxemia was likely not severe enough to affect lactate concentration in our population of cats with respiratory disease.

In contrast with our findings, lactate concentration has been demonstrated to have prognostic value in multiple species with respiratory and cardiac diseases. Hyperlactatemia in people with acute heart failure and acute respiratory distress syndrome has been associated with increased mortality (23–25). Similarly, increasing lactate concentration is associated with increased severity of disease in calves with bovine respiratory disease (26). These differing findings might be related to interspecies lactate metabolism differences. Furthermore, interspecies variation between the underlying cause for heart failure (e.g., congestive/hypoxemic vs. hypoperfusion) may explain why lactate concentration may be prognostic in other species. Lactate has been unreliably reported as a prognostic indicator in the feline population, and we could wonder if clinical research should investigate other markers of perfusion in this population.

This study has several limitations inherent to a retrospective study. No scoring system was implemented to assess the severity of the disease, and the median (range) admission lactate concentration was 2.5 mmol/L (0.6–12.8). The survival rate of 76% in our population of cats, as well as the high euthanasia rate inherent to veterinary medicine, might have hindered the prognostic utility of lactate. Due to the retrospective nature of the study, we also faced variability in the completeness of the medical record and missing data, including mucous membrane color, capillary refill time, pulse oximetry, and recheck lactate, which might have introduced type II error in our findings. A minority of cats (n = 5) with previously diagnosed heart disease did not have repeat diagnostic imaging at the time of hospitalization. While these cats had an increased LA:Ao and their respiratory distress resolved with furosemide, it is possible the cause of their respiratory distress could have been attributed to another disease process. The effect of struggling could not be evaluated neither. It has been suggested that azotemia might disturb lactate metabolism and/or clearance in hypotensive dogs (27). It is currently unknown if this holds true in the feline population. We did not look at the renal function in our population of cats; however, we could wonder if underlying renal disease as well as the use of furosemide could have affected admission and serial lactate in our group of cats with underlying cardiac diseases. No scoring system to evaluate the work of breathing associated with respiratory distress could be used, while it could lead to type B hyperlactatemia related to increasing respiratory muscle activity. Lastly, while all patients were reliably categorized as having respiratory or cardiac disease, a definitive diagnosis was not obtained in all cases.

Results of the present study suggest that hyperlactatemia is common in cats presenting to the emergency room in respiratory distress but is not predictive of survival or length of hospitalization. Lactate clearance was found to be significantly associated with survival, although non-survivors had higher clearance than survivors. Thus, like dogs, serial lactate concentrations may be more predicative of survival than a single measurement and may provide a more effective way to monitor response to treatment. Although lactate clearance was also found to be predictive of length of hospitalization, it lacks clinical significance. Furthermore, no difference in admission lactate concentration was identified between cats with underlying respiratory vs. cardiac diseases. Future prospective studies enrolling a larger population of cats with underlying cardiac and respiratory disease and documenting various levels of hypoxemia are needed to evaluate the prognostic utility of lactate in cats with respiratory distress.

CG was the primary investigator in obtaining patient data. CG wrote the manuscript with the assistance of LG. Both authors contributed to the article and approved the submitted version.

Author LG is a reviewer of the Journal but only participated in the peer review process as an author.

Copyright © 2022 Gilday and Guieu. This is an open-access article distributed under the terms of the Creative Commons Attribution License (CC BY). The use, distribution or reproduction in other forums is permitted, provided the original author(s) and the copyright owner(s) are credited and that the original publication in this journal is cited, in accordance with accepted academic practice. No use, distribution or reproduction is permitted which does not comply with these terms.