Placenta is a temporary organ connecting the fetus and her mother. The trophoblast is the main cellular component of the placenta. The normally functioning trophoblast is crucial for the establishment and maintenance of pregnancy, development of the placenta, remodeling of the spiral artery, and subsequently fetal growth and maturation (Turco and Moffett, 2019). Dysregulation of trophoblasts is associated with pregnancy complications including early pregnancy loss (EPL) (Huppertz, 2020) and preeclampsia (Huppertz, 2018).

The function of trophoblasts is regulated by a group of genes, especially placenta-specific genes including PLAC1 and syncytin (Rawn and Cross, 2008). These genes regulate trophoblastic migration, invasion, proliferation, apoptosis, and metabolism (Bolze et al., 2017; Wan et al., 2019). Galectins are among these genes.

Galectin-14, a recently identified galectin family member, is specifically expressed in placenta with over 12,000 times expression level compared with other tissues (Than et al., 2009). Using immunocytochemistry, a decrease in galectin-14 was observed in trophoblasts retrieved from the cervix at the gestational age of 5–10 weeks before the onset of early pregnancy loss (Fritz et al., 2015). However, the regulatory roles of galectin-14 in trophoblasts have never been investigated yet.

In the current study, the placental expressions of galectin-14 in early pregnancy loss and severe preeclampsia were determined, the effects of galectin-14 on the migration and invasion of trophoblast were observed, and mechanisms behind were explored.

Early pregnancy loss was diagnosed if the ultrasound examination showed an empty sac with a mean diameter over 25 mm or an embryo with a crown–rump length over 7 mm without heartbeat within the first 12 6/7 weeks of gestation (American College of Obstetricians and Gynecologists’ Committee on Practice Bulletins—Gynecology, 2018). Women undergoing artificial abortions with a similar gestational age served as control. The pregnancies complicated by autoimmune disease, genital malformation, history of exposure to poison or X-ray, and other acute or chronic diseases were excluded. Severe preeclampsia was diagnosed according to the criteria recommended by the American College of Obstetricians and Gynecologists (ACOG) (American College of Obstetricians and Gynecologists, 2019). Exclusion criteria were multiple pregnancy, pregnancy complicated by chronic hypertension, diabetes mellitus, and other acute or chronic diseases. Demographic characteristics of the cases were described in Tables 1, 2.

This study was approved by the Institutional Ethical Committee of Women’s Hospital, School of Medicine, Zhejiang University, and informed consents were obtained.

Primary extravillous trophoblasts (EVTs) were isolated from the villi of artificial abortion. Briefly, tissues were washed with cold phosphate buffered saline (PBS). Amniotic membrane and decidua were removed, and villi were minced. The fragments were resuspended with high-glucose DMEM with 10% FBS. After the cells attached on the bottom, bottles were washed with PBS gently, and fresh medium was added. EVT purity was examined by immunofluorescence staining of HLA-G and CK-7. Cells with purity over 90% and within four passages were used in the experiments.

For overexpression, cells were transfected with lentivirus carrying overexpression vector or empty vehicle according to the proper multiplicity of infection (MOI). Here, 5–8 mg/ml polybrene (Cell-Land, Hangzhou, China) was added in the culture medium.

Adherent cells were washed with PBS three times and fixed with 4% paraformaldehyde (Biosharp, Hefei, China) for 15 min. Then, cells were permeabilized with 0.1% Triton X-100 (Sigma-Aldrich, Temecula, United States) for 10 min, blocked for 30 min in 5% bovine serum albumin (BSA) at room temperature, and incubated with primary antibodies against CK7 (1:100), HLA-G (1:100), and galectin-14/LGALS14 (1:100) at 4°C overnight. After rinsing with PBS, cells were incubated with a secondary fluorescein isothiocyanate (FITC) antibody (1:400 MultiSciences Biotech Co., Hangzhou, China) for 1 h at room temperature. Mounting medium with 4’,6-diamidino-2-phenylindole (DAPI) was added in the amount of 1 drop per hole and rinsed off in 5 min. The fluorescence signal was detected by fluorescence microscope (Leica, Wetzlar, Germany).

The sequences of primers were as follows:

Cells were harvested and seeded in the upper chamber with serum-free medium. For invasion assay, the upper chamber was precoated with Matrigel (BD, Franklin Lakes, United States). And the lower chamber contained 500 μl complete medium. After 8 h for migrating or 24 h for invading, the bottoms of the inserts were fixed and stained in a solution containing 0.1% Gentian violet and 20% methanol. Cells were photographed (50×, 100×) and counted (100×) with an inverted phase contrast microscope (Leica, Wetzlar, Germany).

Placental Galectin-14 Is Dysregulated in Early Pregnancy Loss and Preeclampsia 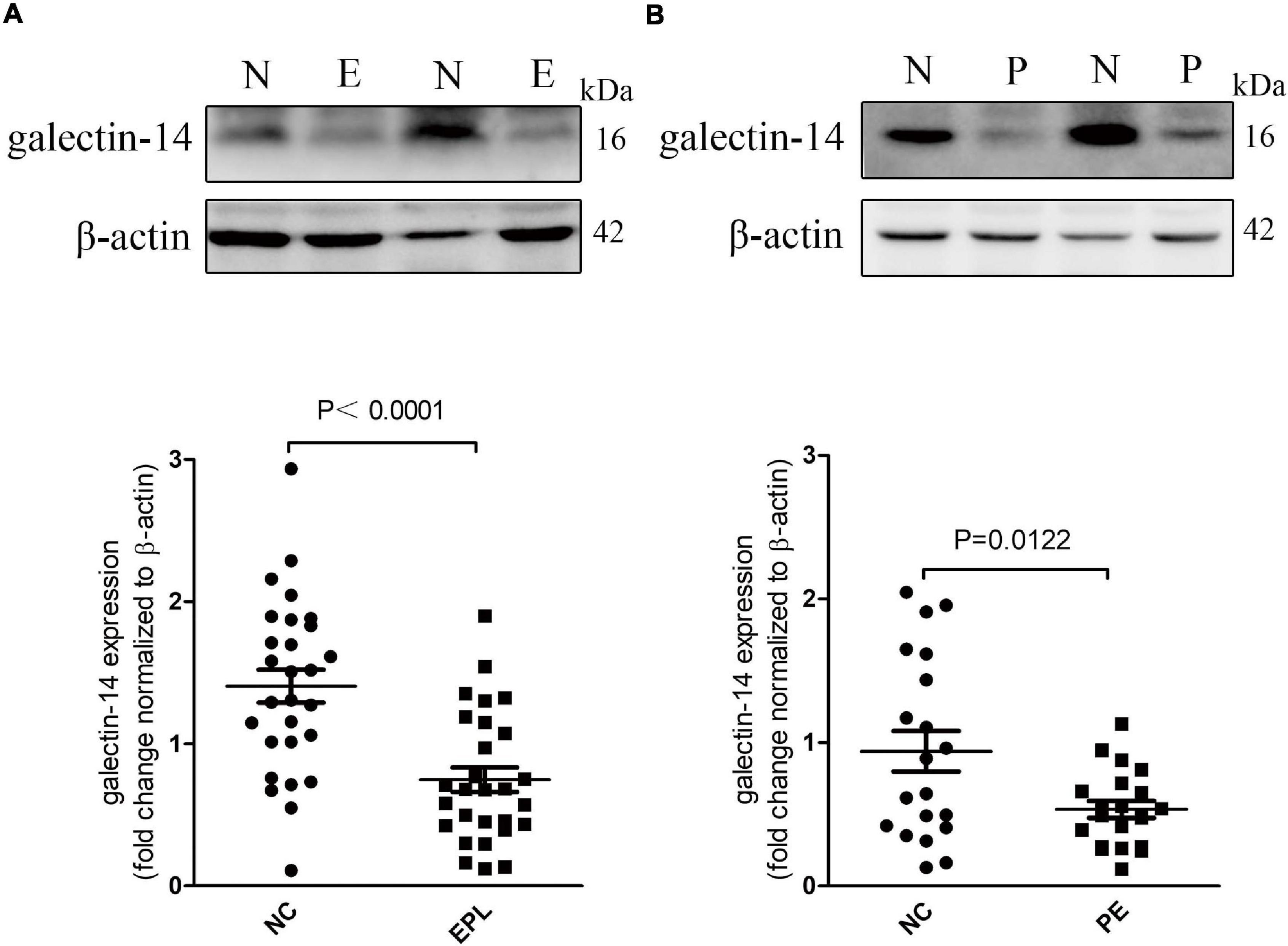 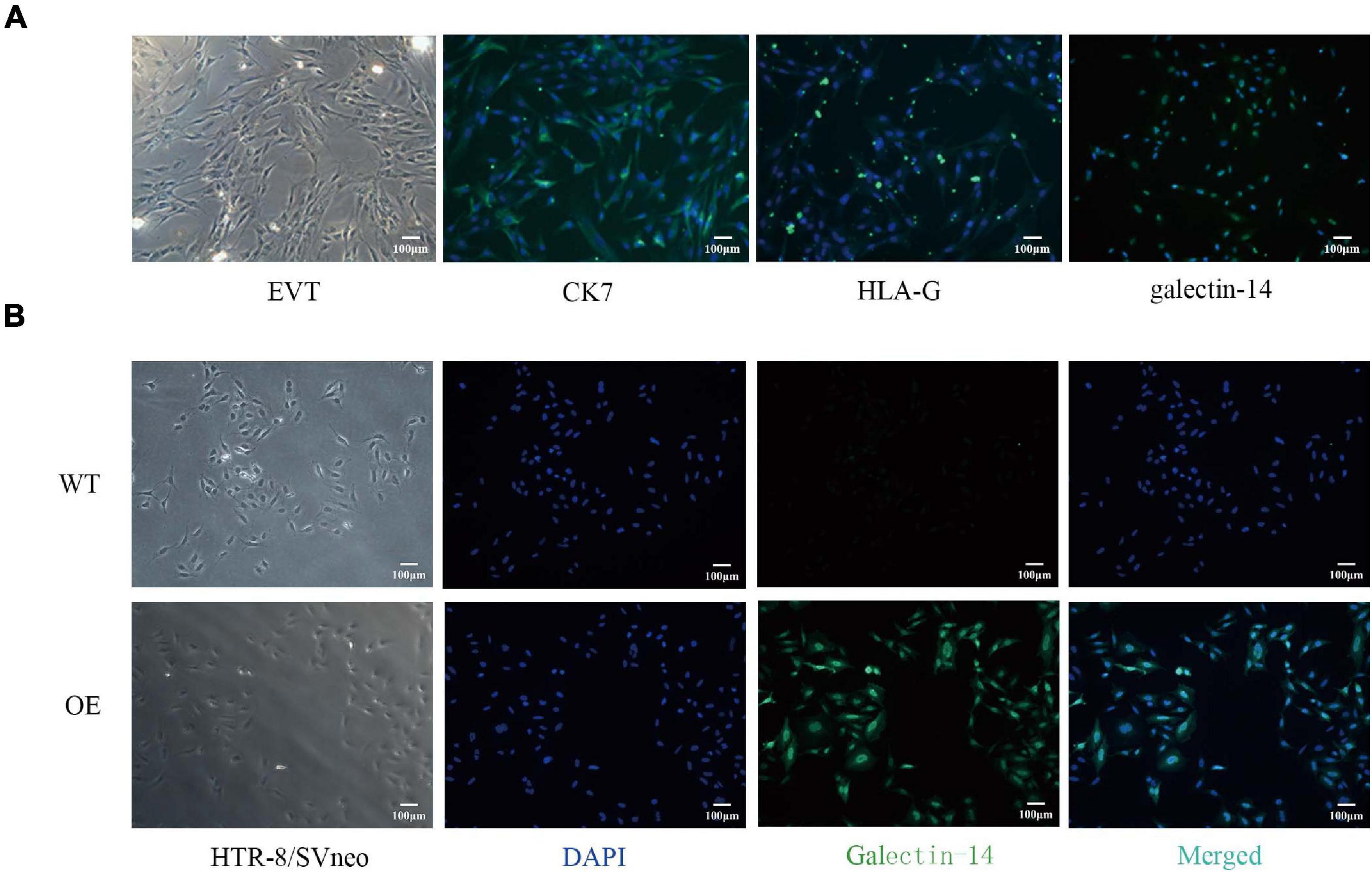 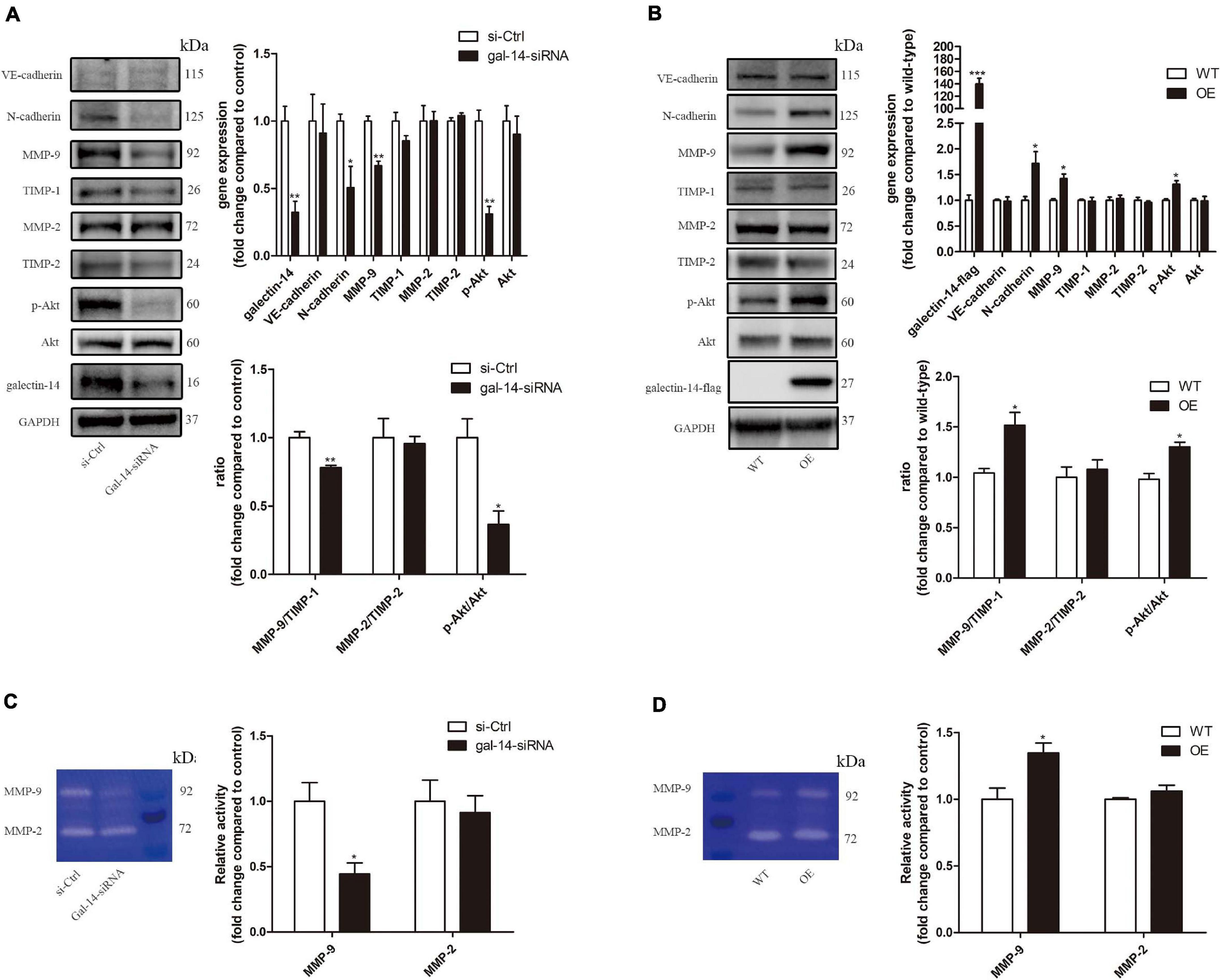 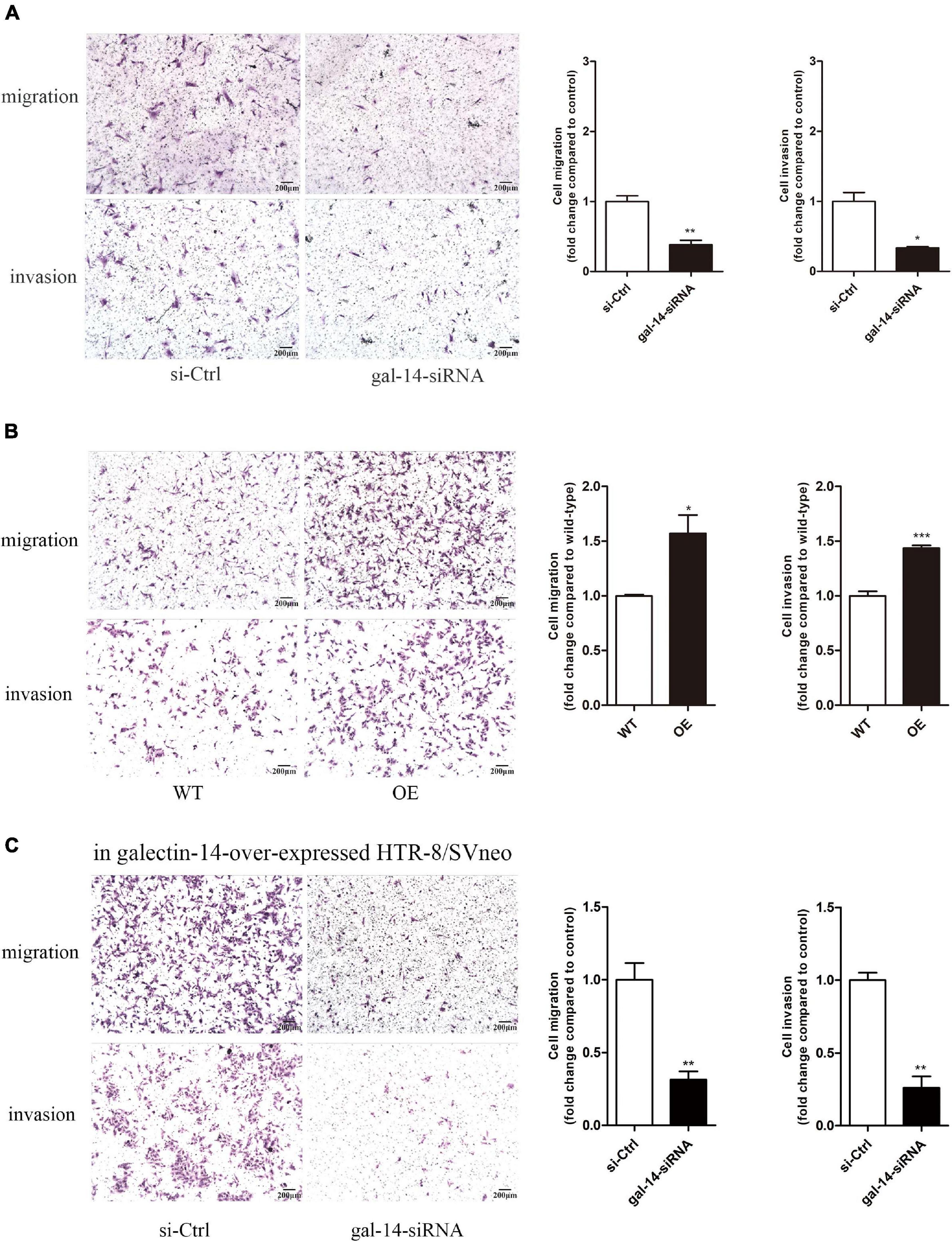 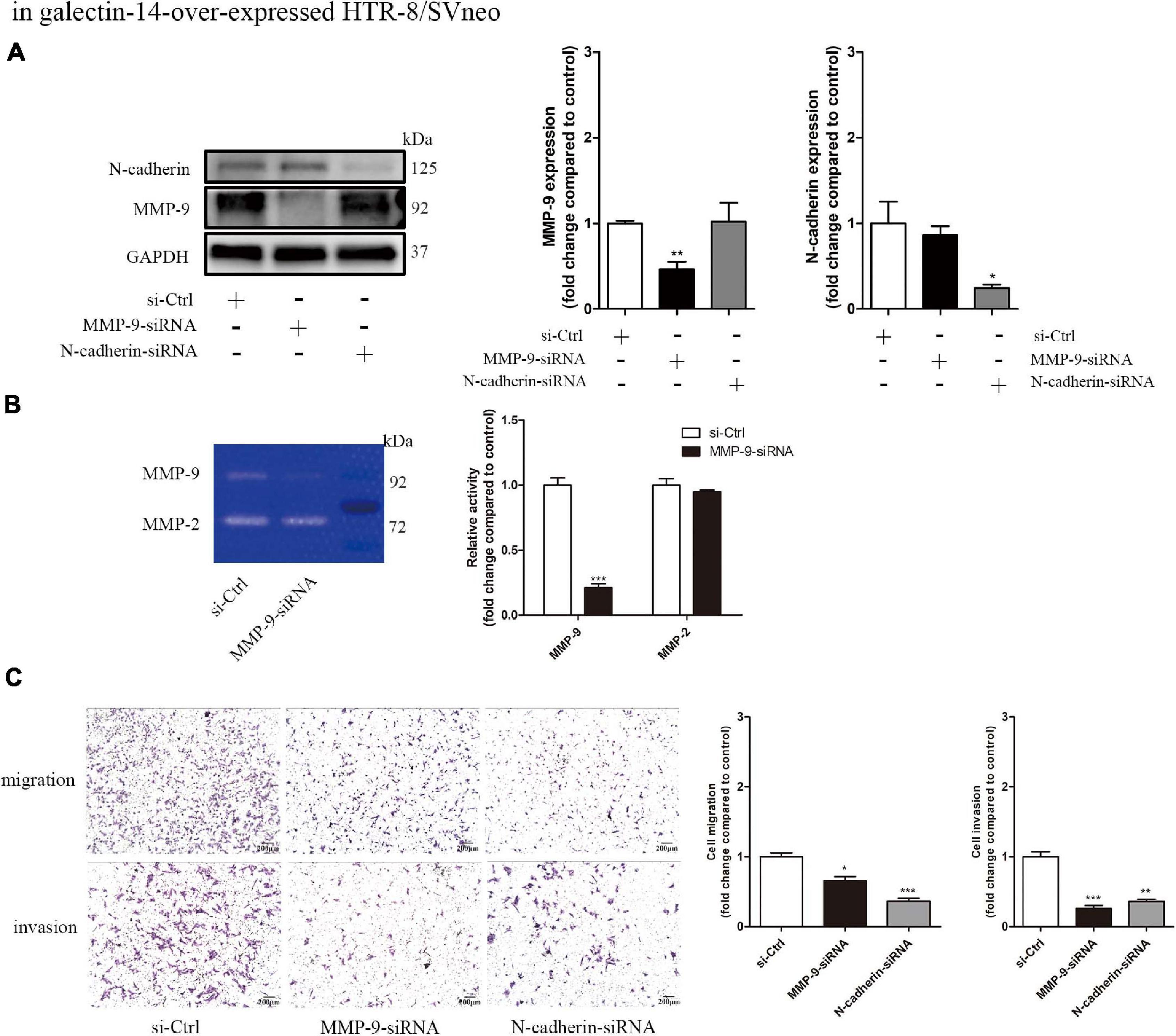 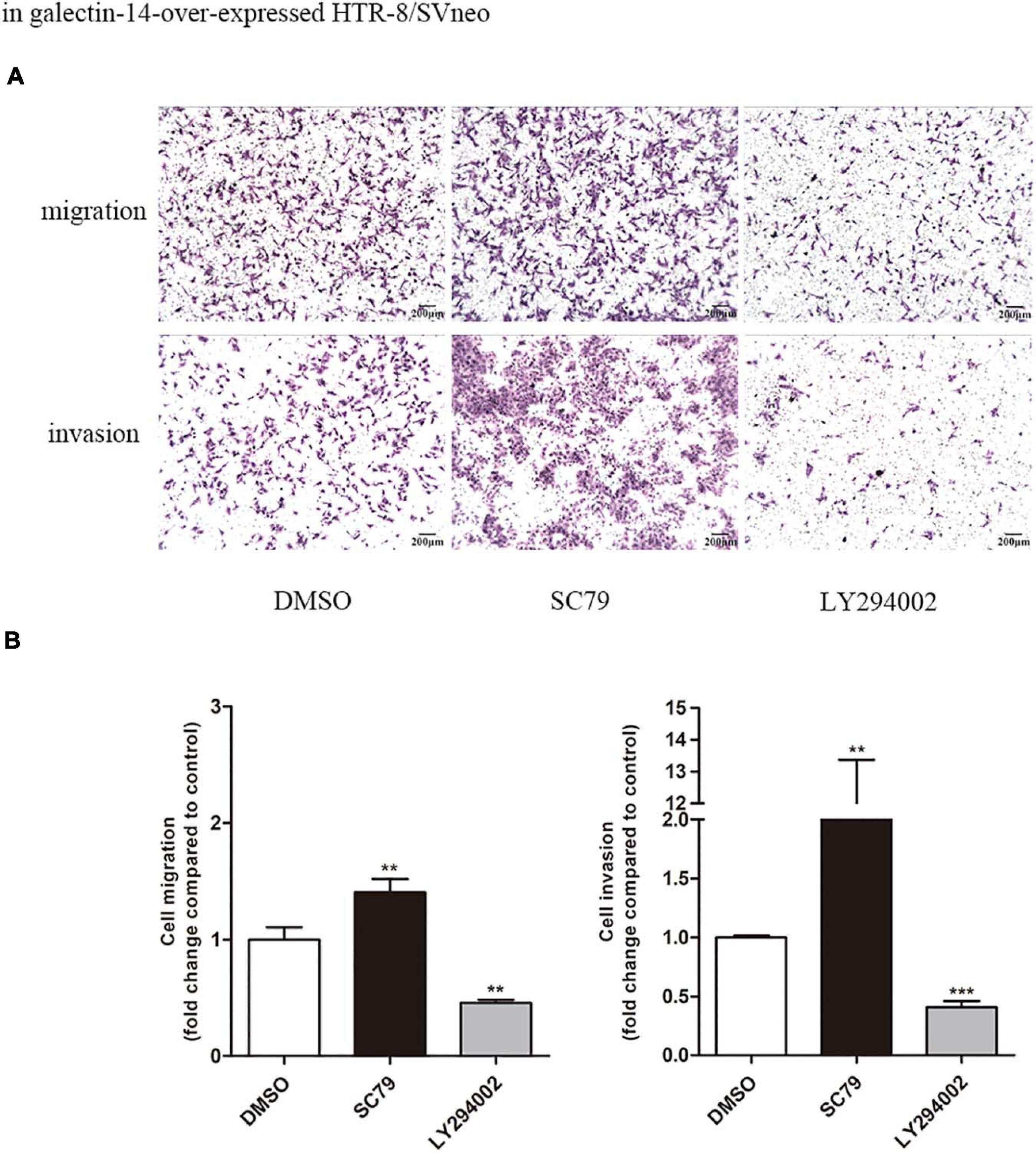 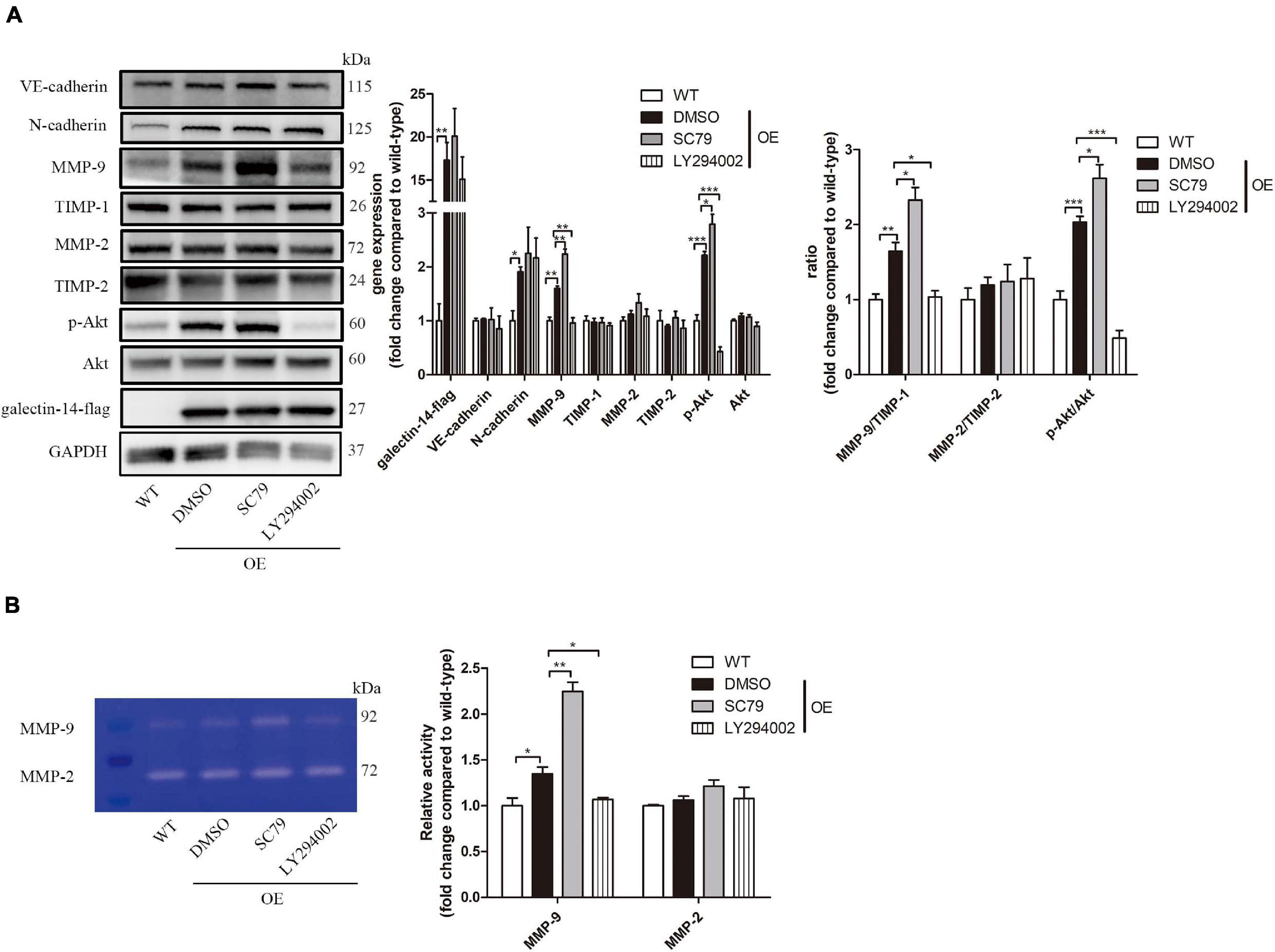 The dysfunction of trophoblasts is one of the major pathogeneses of early pregnancy loss and preeclampsia. In the current investigation, we found the decreased placental expression pattern of galectin-14 in early pregnancy loss and preeclampsia, which were consistent with previous studies (Than et al., 2014; Fritz et al., 2015; Balogh et al., 2019). These findings point to the importance of galectin-14 in these pregnancy-related diseases. We further demonstrated that galectin-14 promoted the migration and invasion of trophoblasts through enhancing the expression of MMP-9 and N-cadherin.

Gelatinases, including MMP-2 and MMP-9, degrade extracellular matrix (ECM) to facilitate trophoblastic migration and invasion (Shimonovitz et al., 1994). The activity of MMP-2 and MMP-9 is inhibited by TIMP-2 and TIMP-1. The different temporal expression patterns during pregnancy indicate that MMP-2 is mainly involved in embryonic implantation while MMP-9 in trophoblast invasion (Espino et al., 2017). In the placenta, MMP-9 is expressed in the EVT-rich regions (Naruse et al., 2009). In vivo, MMP-9-null mouse embryos showed deficiency of trophoblast invasion (Plaks et al., 2013). The decrease in MMP-2 and MMP-9 activity or ratios of MMP-2/TIMP-2 and MMP-9/TIMP-1 might be involved in the pathogeneses of early pregnancy loss and preeclampsia (Graham and McCrae, 1996; Choi et al., 2003; Shokry et al., 2009; Plaks et al., 2013; Gutierrez et al., 2020; Lin et al., 2020). Hereby, we found that galectin-14 promoted the expression and activity of MMP-9 and increased the MMP-9/TIMP-1 ratio while the migration and invasion of trophoblasts were enhanced.

Epithelial–mesenchymal transition (EMT) is another indispensable process for trophoblasts obtaining motility and invasion capacity. During EMT, trophoblasts lose their endothelial phenotype, loosen intercellular adhesion, and modulate cytoskeleton. The cell–cell junction proteins, such as E-cadherin, are degraded, while mesenchymal cell markers, such as N-cadherin and VE-cadherin, are upregulated (Kokkinos et al., 2010). The temporal and spatial expression of cadherins is the hallmark of trophoblast phenotype transformation, and defects in this process result in shallow trophoblast invasion, which are associated with pregnancy complications, such as early pregnancy loss and preeclampsia (Brown et al., 2005; Multhaup et al., 2018). In mice, galectin-1 improves trophoblast invasion and migration by increasing N-cadherin expression and decreasing E-cadherin expression (You et al., 2018). Herein, we observed that galectin-14 enhanced the expression of N-cadherin; meanwhile, it prompted the invasion and migration of trophoblasts, indicating that, like galectin-1, galectin-14 facilitates migration and invasion by promoting EMT in trophoblasts.

An in vivo research will enhance our insight into the roles of galectin-14 in pregnancy, placental development, and pathogeneses of early pregnancy loss and preeclampsia. However, there is no homologous gene of LGALS14 (the gene of galectin-14) in rat or mouse, which hammered the investigation with animal models.

In summary, galectin-14 promotes trophoblast migration and invasion by enhancing the expression of MMP-9 and N-cadherin through Akt phosphorylation (Figure 8). The dysregulation of galectin-14 is involved in the pathogenesis of early pregnancy loss and preeclampsia.

The studies involving human participants were reviewed and approved by Institutional Ethical Committee of Women’s hospital, School of Medicine, Zhejiang University. The patients/participants provided their written informed consent to participate in this study.

MW, LB, and MD conceived and designed the experiments. MW, PW, YaX, and PJ performed the experiments and analyzed the data. YuX and ZW collected the samples and consents. MW wrote the draft. LB, YQ, and MD edited the manuscript. All authors contributed to the article and approved the submitted version.

This research was supported by the National Natural Science Foundation of China (No. 81370726) and the Key Research and Development Plan of Zhejiang Province (2019C03025).

The Supplementary Material for this article can be found online at: https://www.frontiersin.org/articles/10.3389/fcell.2021.645658/full#supplementary-material

Copyright © 2021 Wang, Xu, Wang, Xu, Jin, Wu, Qian, Bai and Dong. This is an open-access article distributed under the terms of the Creative Commons Attribution License (CC BY). The use, distribution or reproduction in other forums is permitted, provided the original author(s) and the copyright owner(s) are credited and that the original publication in this journal is cited, in accordance with accepted academic practice. No use, distribution or reproduction is permitted which does not comply with these terms.