The mechanism of crown dentinogenesis has been well studied; however, knowledge about root dentinogenesis is only emerging (Park et al., 2007; Zhang et al., 2015; Li et al., 2017). During root odontoblast differentiation, the cranial neural crest derived mesenchyme condenses around and continuously interacts with Hertwig’s epithelial root sheath (Huang et al., 2009). Subsequently, the apical papilla mesenchyme undergoes differentiation into pre-odontoblasts, which terminally differentiate to become odontoblasts (Ruch et al., 1995). This process is marked by the expression of several genes that encode collagenous and non-collagenous proteins that are also found in osteoblasts and the bone matrix (Gaikwad et al., 2001). The overlapping pattern of gene expression suggests the divergence of a common pool of progenitor cells for odontoblasts and osteoblasts. The molecular mechanism that controls the osteo/odontogenic differentiation of root dental mesenchyme remains largely unknown.

To test the role of TGF-β signaling in root dentinogenesis during the development of tooth roots, we employed the Ocn-Cre strain to disrupt TGF-β signaling in Ocn-Cre; Tgfbr2fl/fl mice. According to our previous study, Ocn-Cre recombinase activity is first detected in the primordial root at P10, in contrast to the intense expression in the developing crown odontoblasts and is active in the odontoblast lineages during root formation (Gao et al., 2009; Bae et al., 2013; Kim et al., 2013; Zhang et al., 2013). We then introduced Ocn-Cre and floxed ROSA26-loxP-stop-loxP-EYFP (ROSA26EYFP) mice to characterize which cell compartments in the tooth root harbored Ocn-Cre-mediated gene ablation. Cre-mediated recombination within the reporter locus activates enhanced yellow fluorescent protein (EYFP) expression and thus marks the recombined cells. In situ hybridization and immunohistochemical double labeling showed that odontoblasts lining the dentin layer are all EYFP+, but none of the EYFP+ cells in contact with Hertwig’s epithelial root sheath co-expressed Col1a1, Ocn, or Dspp,, which are markers of odontoblast differentiation (Supplementary Figure 1). These data demonstrate that the Ocn-Cre expression starts in pre-odontoblasts and leads to gene excision throughout the odontoblastic lineage.

Tgfbr2 protein was detected in the membrane and cytoplasm of pre-odontoblasts at P10 and P20 and was successfully ablated in pre-odontoblasts and odontoblasts in Ocn-Cre; Tgfbr2fl/fl mice as shown by immunohistochemistry (Figure 1A). The differentiating odontoblasts in Tgfbr2fl/fl mice were columnar at P30 when development of the first molar roots was near completion with the nucleus aligned away from the newly formed dentin (Figure 1B, blue arrowheads). The root dentin was deposited in a well-organized structure with a lightly stained and demarcated layer of pre-dentin (Figure 1B). However, the cells lining the Ocn-Cre; Tgfbr2fl/fl mouse tooth root were cuboidal and were entrapped in the newly formed matrix; this is similar to the way that osteoblasts differentiate (Figure 1B, red arrowheads). The pre-dentin layer of the mutant mice was lost and was replaced by osteodentin, a type of atubular dentin that resembles bone (Figure 1B). 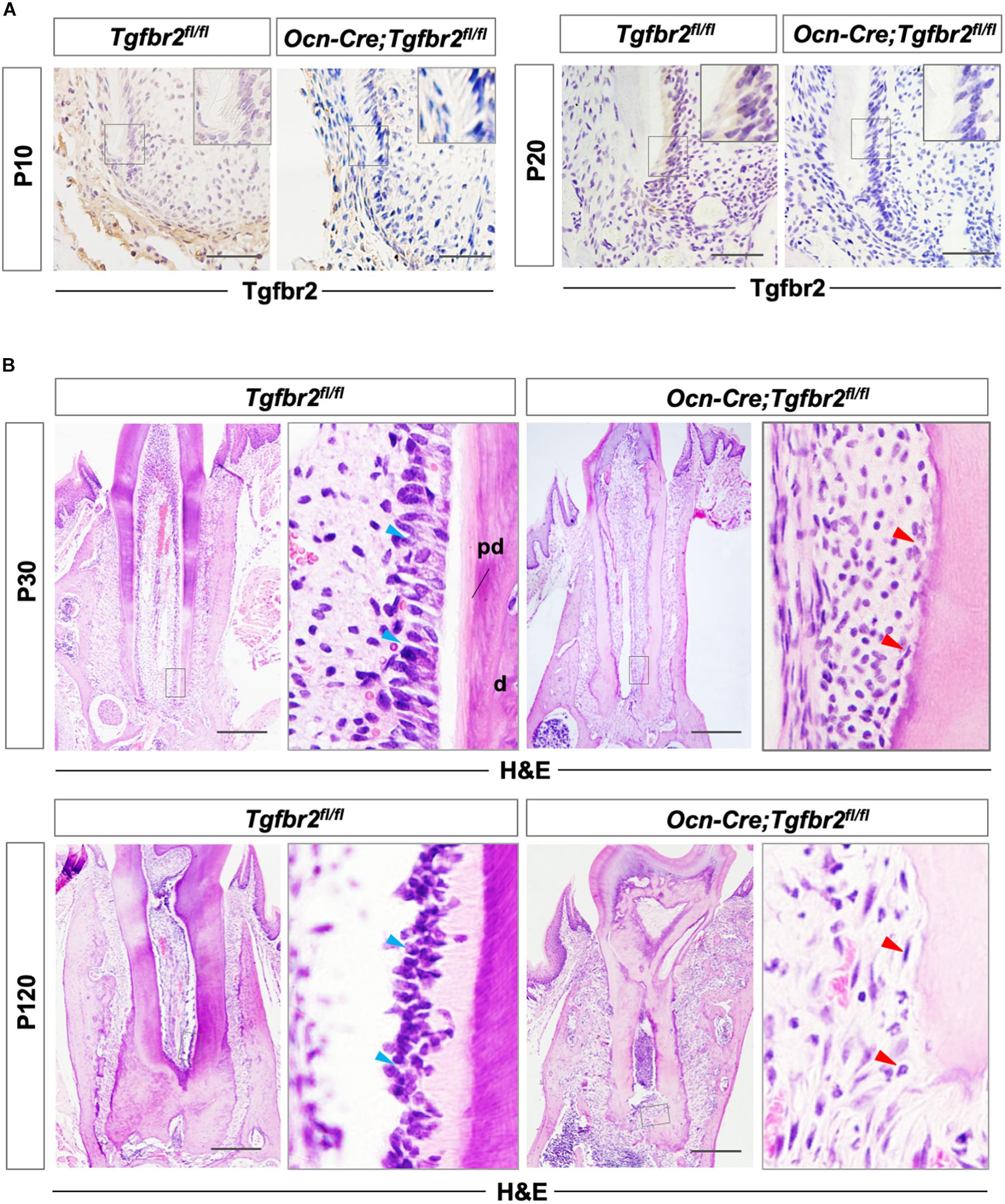 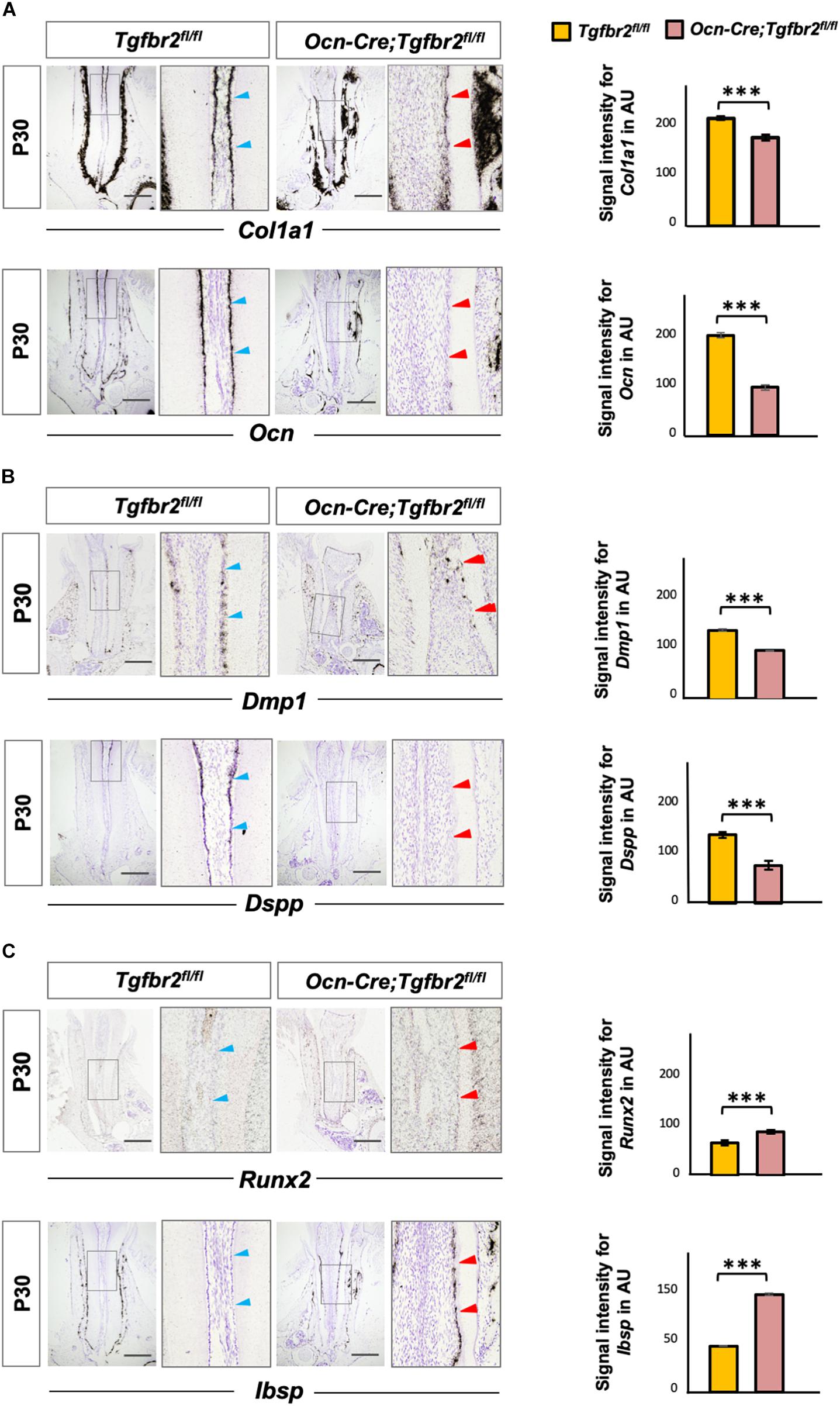 Wnt signaling is a key determinant of cell fate and a promotor of osteogenic differentiation in multiple cell types (Brack et al., 2007; Cawthorn et al., 2012; Zhu et al., 2019). We hypothesized that ectopic expression of Ibsp in mutant odontoblasts was due to over-activation of Wnt signaling. As a member of the canonical Wnt pathway, overexpressing Wnt6 could enhance the osteogenic differentiation of human dental papilla cells (hDPCs) with up-regulated expression of mineralization-related genes such as alkaline phosphatase (ALP), Col1a1, Ocn, Osteopontin, and Ibsp (Wang et al., 2010). Wnt10a has been reported to regulate osteogenesis in mesenchymal stem cells, and T cell factor 1 (Tcf-1), which is a nuclear transcription factor, potentially bound to the promoter region of Runx2 and determined the osteogenic lineage in stem cells from human apical papilla cells (Zhou et al., 2019). Therefore, we detected expression of Wnt6, Wnt10a, and Tcf-1 by in situ hybridization. Transcription of Wnt6, Wnt10a, and Tcf-1 was upregulated in Ocn-Cre; Tgfbr2fl/fl mice (Figures 3A–C, blue and red arrowheads). We also analyzed the expression of Axin2, a canonical Wnt target gene, and found it was increased significantly in Ocn-Cre; Tgfbr2fl/fl mice (Figure 3D, blue and red arrowheads). 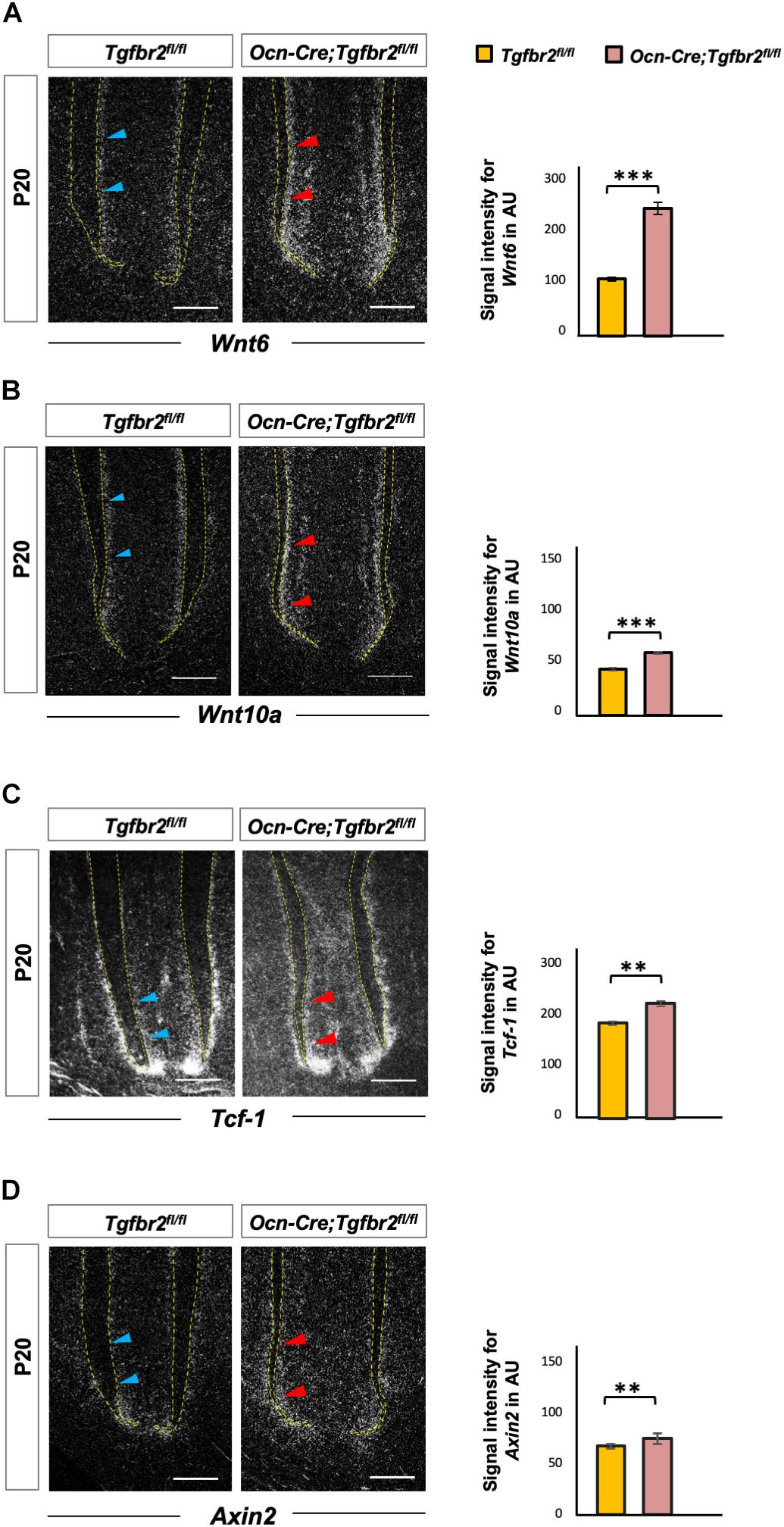 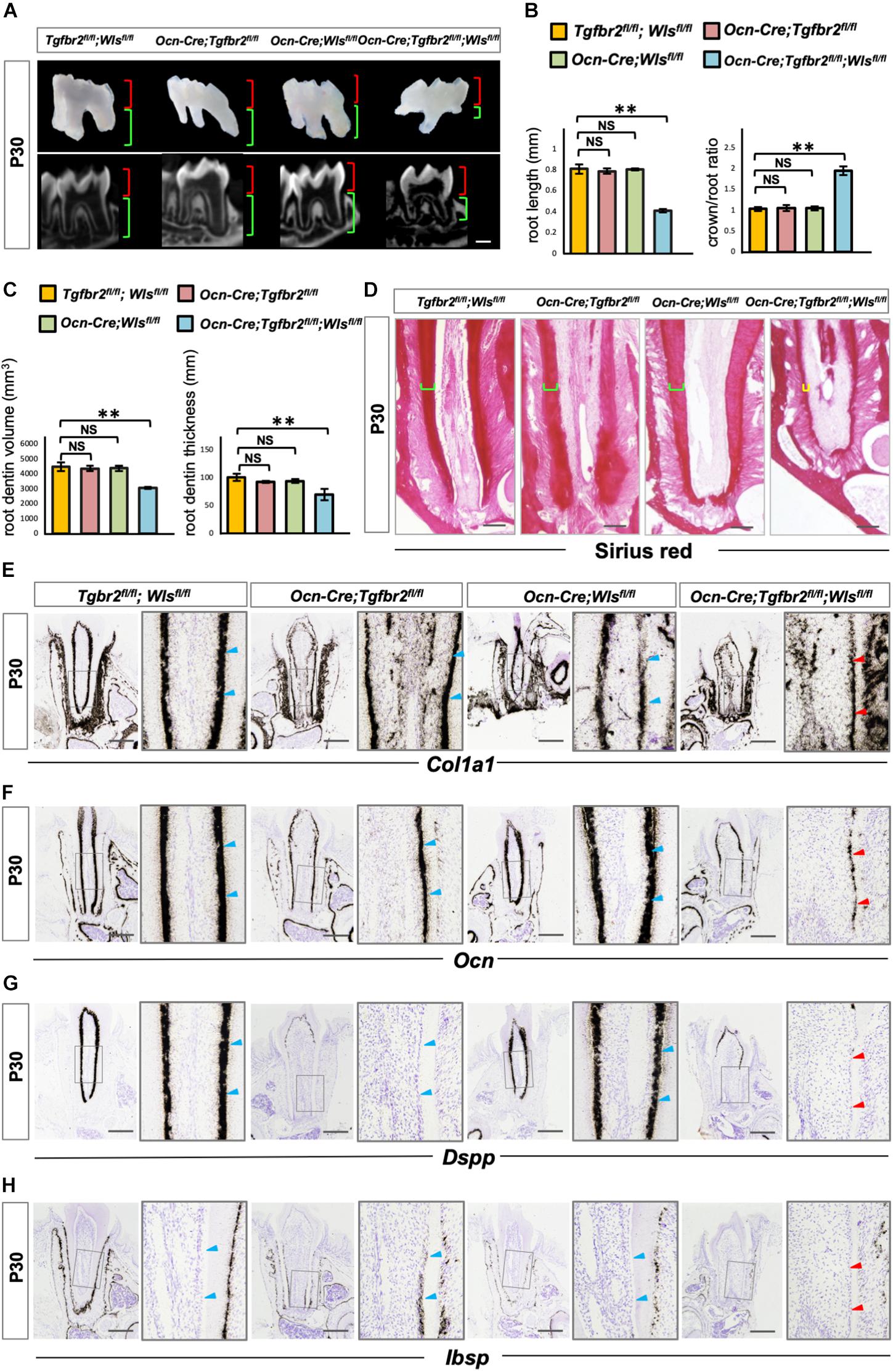 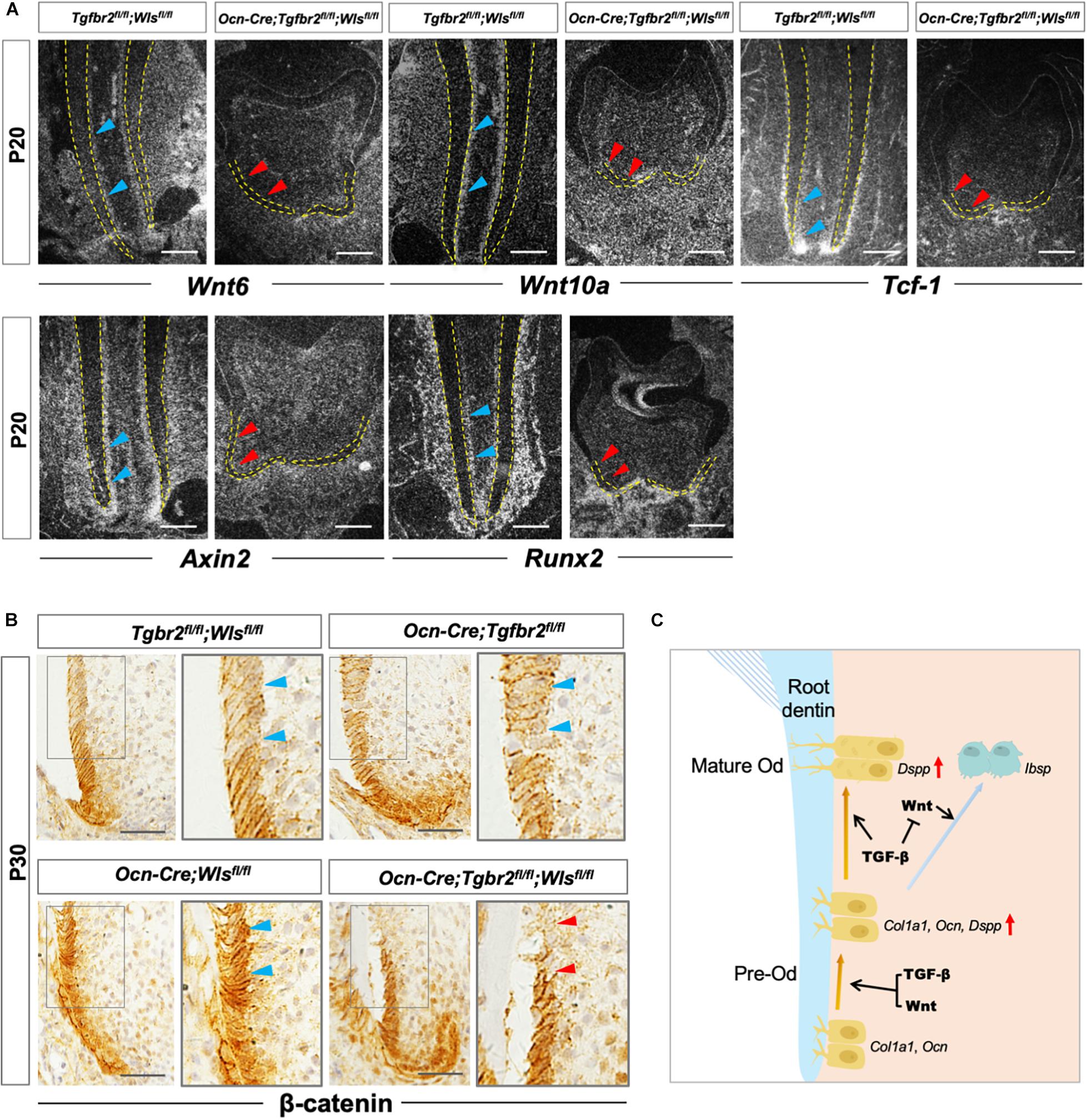 The role of TGF-β signaling pathway that regulates odontoblast differentiation has been reported in several animal models (Oka et al., 2007; Kim et al., 2015). For example, Smad4-mediated TGF-β/bone morphogenetic protein signaling maintain Wnt activity in the dental mesenchyme to ensure a proper cranial neural crest cell fate decision during the early stage of tooth morphogenesis (Li et al., 2011). However, root odontoblast differentiation occurs at the late stage of tooth development and was thought to have a different regulatory mechanism from crown odontoblast differentiation. Indeed, during tooth root development, p-Smad2/3 is strongly expressed in dental papilla, moderately expressed in odontoblasts, indicating a stage-specific role of TGF-β signaling in root odontoblast differentiation (Li and Pan, 2018). Interestingly, many Wnt family members are also differentially expressed in the developing tooth root pre-odontoblasts and mature odontoblasts, for example, Wnt6, Wnt10a (Yamashiro et al., 2007), and their downstream targets Tcf-1 and Axin2, suggesting that Wnt signaling might function in a synergic way with TGF-β signaling (Lohi et al., 2010). To clarify this, we generated a serial of Ocn-Cre; Tgfbr2fl/fl, Ocn-Cre; Tgfbr2fl/fl; Wlsfl/fl, and Ocn-Cre; Tgfbr2fl/fl; ROSA26Dkk1 mice, and provided in vivo evidences that TGF-β signaling is required for the root odontogenesis by cooperation with Wnt signaling, whereas inhibits osteogenic potential to insure the specified odontogenic lineage, which might be achieved through suppressing Wnt expression (Figure 5C). In accordance with our results, previous studies have also observed a calcified mass in the pulp chamber after Tgfbr2 ablation in the dental mesenchyme, however, the cell source as well as the downstream effectors that produced the ectopic bone-like structures have not been demonstrated (Wang et al., 2013; Ahn et al., 2015). Study showed that overexpressing Runx2, a master regulator of osteoblast differentiation, in odontoblasts inhibits the terminal odontogenic differentiation and reversed them to a osteogenic phenotype (Miyazaki et al., 2008). Since Wnt signaling is an evolutionarily conserved intracellular signaling that plays an important role in the osteogenic differentiation, it is likely that TGF-β might inhibit Wnt signaling to reduce Runx2 expression, which might explain how TGF-β signaling functions in directing the osteo/odontogenic phenotype of mature root odontoblasts. However, the molecular mechanisms underlying these regulations need to be further clarified.

The animal study was reviewed and approved by the Beijing Experimental Animal Regulation Board (SYXK/JING/2005/0031).

The Supplementary Material for this article can be found online at: https://www.frontiersin.org/articles/10.3389/fcell.2021.687099/full#supplementary-material

Copyright © 2021 Zhang, Lin, Liu, Yang, He, Zhu, Yang and Yang. This is an open-access article distributed under the terms of the Creative Commons Attribution License (CC BY). The use, distribution or reproduction in other forums is permitted, provided the original author(s) and the copyright owner(s) are credited and that the original publication in this journal is cited, in accordance with accepted academic practice. No use, distribution or reproduction is permitted which does not comply with these terms.

The Role of Immunity Signaling in Stem Cell Therapy