The cAMP response element binding protein (CREB) family activating transcription factor 1 (ATF1) and cAMP response element binding protein 1 (CREB1) have been reported in a diverse group of tumors, however, the mechanistic basis for this remains unclear. Here we found that CREB1 and ATF1 unexpectedly regulate glutathione (GSH) biosynthesis by suppressing the expression of glutamate-cysteine ligase modifier subunit (GCLM) and glutathione synthase (GSS), two key enzymes of GSH biosynthesis pathway. Mechanistic studies reveal that GCLM and GSS are direct transcriptional targets of CREB1 and ATF1. Through repressing the expression of these two enzymes, CREB1 and ATF1 reduce the GSH biosynthesis and the capability of cells to detoxicate reactive oxygen species (ROS), thereby increasing cellular susceptibility to oxidative stress. Therefore, our findings link CREB1 family to cellular metabolism, and uncover a potential therapeutic approach by targeting GCLM or oxidative stress for the treatment of tumors with relatively high expression of CREB1 family proteins.

Reactive oxygen species (ROS) is an important determinant of cancer cells metabolism phenotypes (Rodic and Vincent, 2018). The outcomes of ROS performance in tumor cells are dose-dependent. In general, low level of ROS facilities proliferation, growth, invasion and metastasis of tumor cells, while relatively high level of ROS leads to cell cycle arrest and even cell death. Therefore, it is essential for cancer cells to optimize cellular ROS level to maintain tumor progression (Ahmad et al., 2005; Aykin-Burns et al., 2009; Rodic and Vincent, 2018). To achieve this, tumors cells could increase their antioxidative capacity by upregulating relevant metabolic molecules and the expression of certain antioxidant enzymes. Glutathione (GSH) is thought to be a main small thiol-antioxidant derivative (Veeravalli et al., 2011; Quintana-Cabrera et al., 2012), consisting of L-glutamine, L-cysteine, and L-glycine, found in all mammalian tissues (Lu, 2009). GSH is generally synthesized exclusively in the cytoplasm in two consistently steps at the expenditure of ATP, the first step, which is also a rate-limiting step, catalyzes the generation of γ-glutamylcysteine by the GCL, and the glutathione synthase (GSS) catalyzes the second step to produce GSH. The GCL holoenzyme consists of two separate proteins, a catalytic subunit (GCLC) and a modifier subunit (GCLM) (Krejsa et al., 2010), which are encoded by different genes in humans. GCLC exhibits catalytic activity (Seelig et al., 1984; Lu, 2009) and GCLM is enzymatically inactive but plays an important regulatory role by lowering the Km of GCL for glutamate and raising the Ki for GSH (Huang et al., 1993a,b). GSH synthesis pathway is severely activated by some stimuli including oxidative stress. 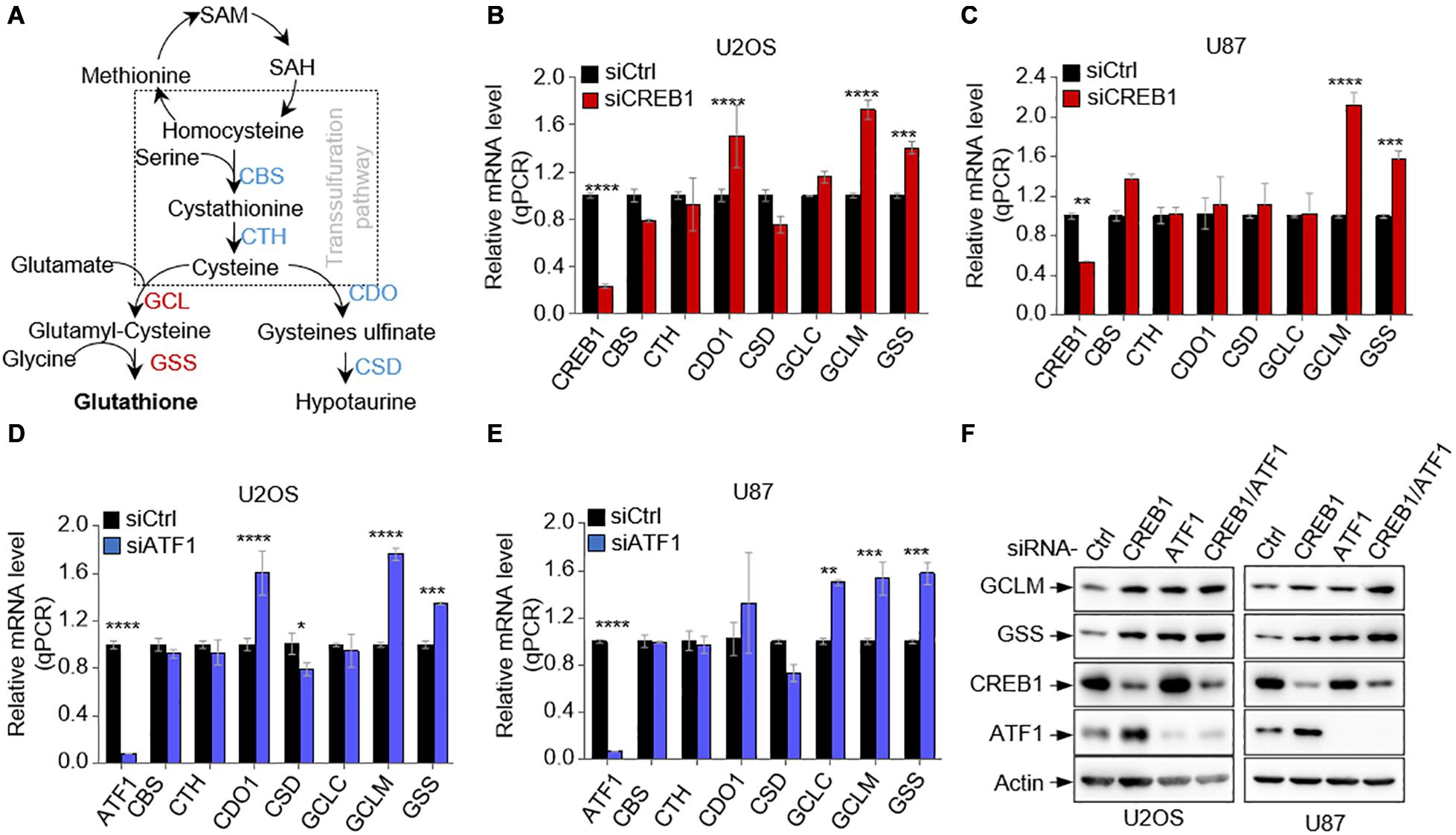 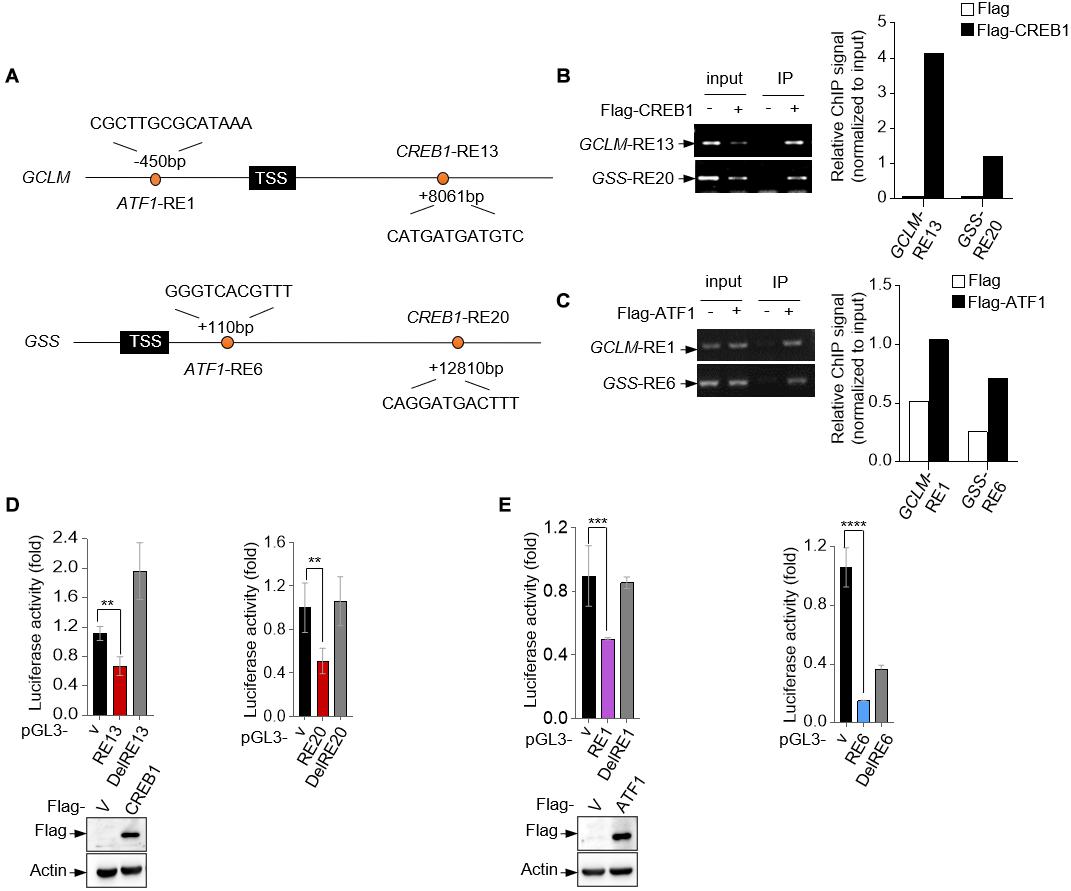 GCLM and GSS are essential for GSH synthesis (Li et al., 2016). Using small interfering RNA (siRNA) to simultaneously knock down the expression of CREB1 and ATF1, we observed that GSH production was substantially increased in U2OS cells (Figures 3A,B). GSH is considered to be one of the most important scavengers of reactive oxygen species (ROS). Consistent with this, ablation of CREB1 and ATF1 decreased the cellular level of ROS in both U2OS, U87, and HepG2 cells as determined by DCF staining (Figure 3C and Supplementary Figures 2A,B). The specificity of the assay was shown by an increase in the detected ROS upon G6PD silencing (Supplementary Figure 2C). G6PD is the first and rate-limiting enzyme of the PPP pathway, which is the main source of intracellular antioxygen NADPH (nicotinamide adenine dinucleotide phosphate, reduced) (Jiang et al., 2011). Conversely, overexpression of CREB1 and ATF1 led to increased intracellular ROS in U2OS cells (Supplementary Figure 2D). Consistent with previous study (Huang et al., 1993b; Chhabra et al., 2007), GSS depletion showed no effect on ROS level, which could be due to the complex GSH-independent action(s) of GSS (Supplementary Figure 2E). Nevertheless, silencing GCLM resulted in an increase in ROS level (Supplementary Figure 2E). Moreover, knockdown of GCLM alone elevated intracellular level of ROS, and reversed the suppressive effect of depletion of CREB1 and ATF1 on ROS in U2OS cells (Figure 3D). Collectively, these results indicate that CREB1 and ATF1 have a role in maintaining ROS though downregulation of GCLM and GSS expression. 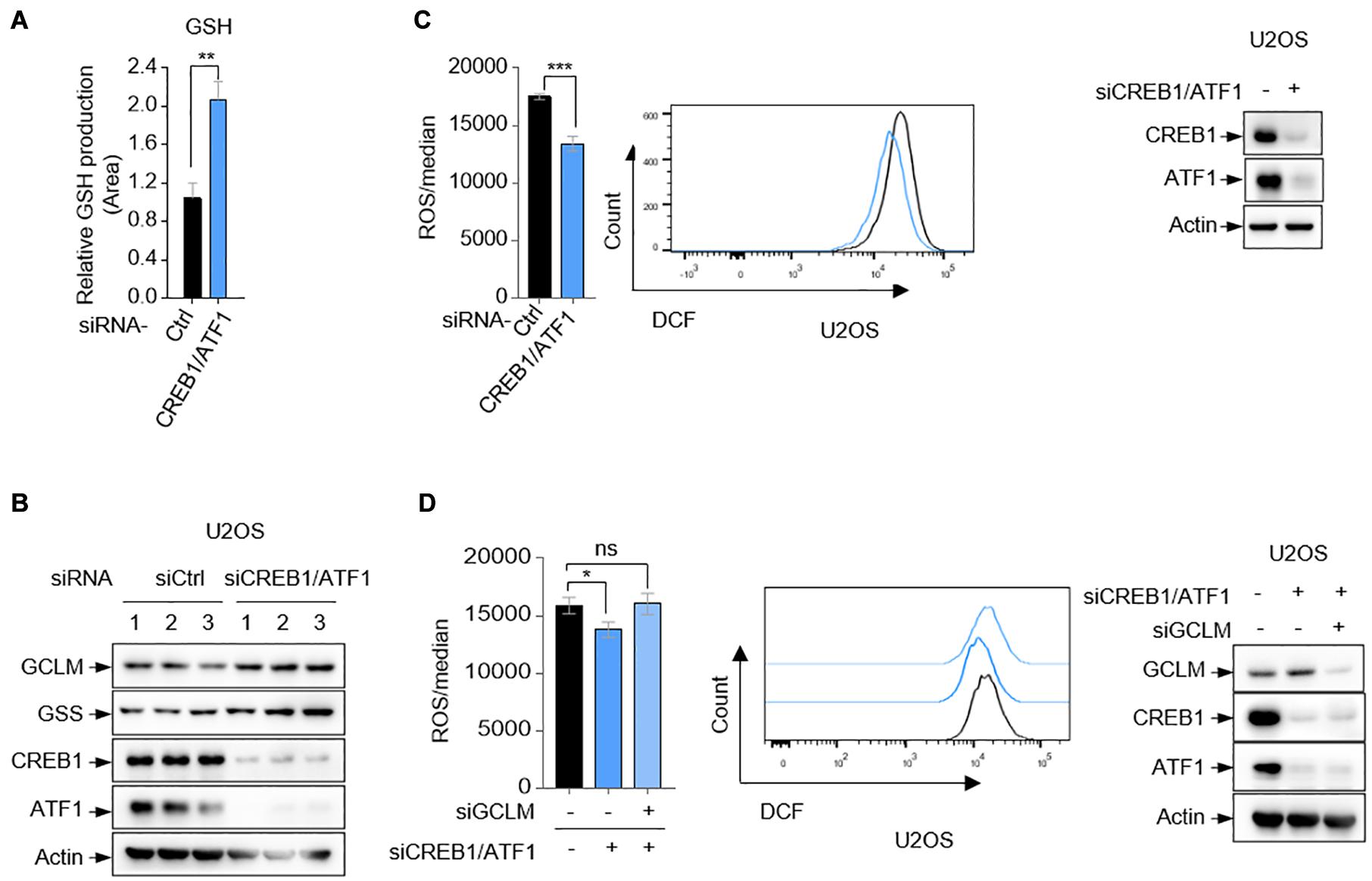 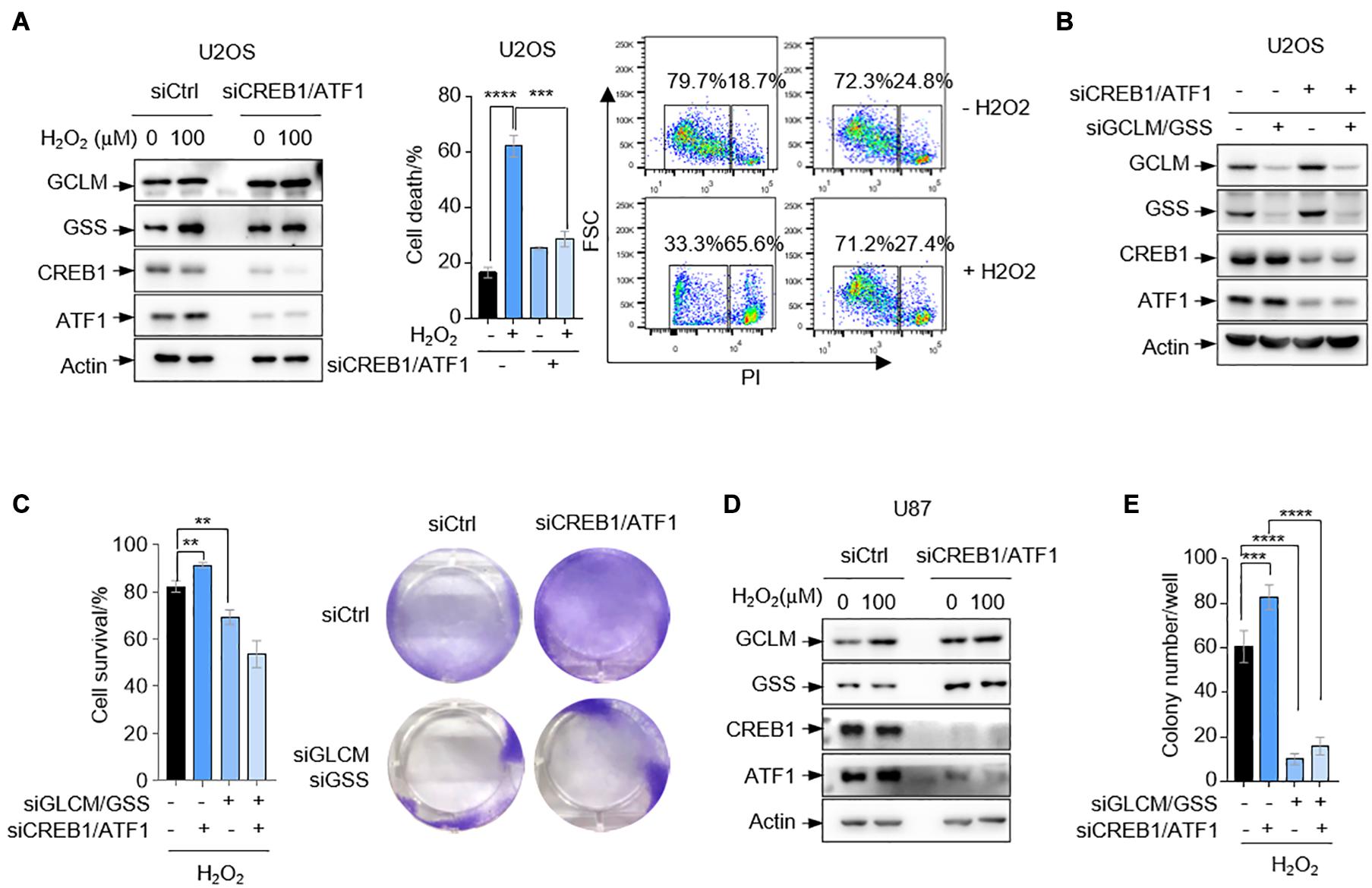 In this work, we found a previously unappreciated role for CREB family proteins in controlling GSH synthesis. Through downregulation of the expression of GCLM and GSS, CREB1 and ATF1 unexpectedly reduce GSH generation and thereby dampen the cellular ability to scavenge ROS, leading to increased susceptibility of cells to oxidative stress. Intriguingly, GSS seems not to be essential for ROS detoxification, but still acts a key metabolic enzyme of the GSH de novo synthetic pathway. To elucidate the underlying mechanism(s) for these unexpected observations would be of great interest. One potential expectation is that GSS possess ROS-related but GSH synthesis-independent functions, which could comprise the effect of GSH production on ROS. Nevertheless, GCLM downregulation appears to be sufficient to abolish ROS reduction in cells depleted of CREB family proteins CREB1 and ATF1. CREB1 has been implicated in supporting tumor cell proliferation and survival in some types of tumor cells, indicating that CREB1 might be an oncogenic protein that can help tumor cell to proliferate in certain situations (Thway and Fisher, 2012). Here our findings reveal a metabolic mechanism for CREB1-mediated tumor cell survival, and also suggest that targeting GCLM or oxidative stress potentially could be a therapeutic approach for treatment of tumors with relatively high expression of CREB1 family proteins.

Genes Knock Down With siRNA

The coding sequences corresponding to the full-length human CREB1 and ATF1 were amplified by polymerase chain reaction (PCR) from cDNA library of 293T cells and then cloned into Prk5-flag empty vector as indicated. The cloning sequences are as follows: CREB1, 5′-CGCGGATCCGCGATGACCATGGAATCTGGAGCCG-3′ (forward) and 5′-CCCAAGCTTGGGTTAATCTGAT TTGTGGCAGTAAAGGTCCT-3′ (reverse); ATF1, 5′-TGC TCTAGAATGGAAGATTCCCACAAGAGTAC-3′ (forward) and 5′-CCCAAGCTTTCAAACACTTTTATTGGAATAAAGAT CC-3′ (reverse). sgRNAs were made in px330-GFP vector. The sequences were: CREB1:5′-CACCGGGGCAGACAGTTC AAGTCCA-3′(sense) and 5′-AAACTGGACTTGAACTGT CTGCCCC-3′ (antisense); ATF1: 5′-CACCGGAACGCTG ACGTCATCAACCCG-3′ (sense) and 5′-AAACGCACCGAC TCGGTGCCAC-3′ (antisense).

Whole-cell lysates were obtained using modified RIPA lysis buffer (10 mM Tris–HCl at pH 7.5, 5 mM EDTA, 150 mM NaCl, 1% NP-40, 1% sodium deoxycholate, 0.025% SDS, and added protease cocktail freshly). Cells were washed and incubated in lysis buffer for 30 min on ice, and boiled in 5x loading buffer. Protein samples were resolved by SDS-PAGE and transferred onto nitrocellulose membrane. The membrane was then blocked in 5% skimmed milk in TBST and probed with the indicated antibodies.

Measurements of GSH and ROS

Cells were transfected with siRNA for 24 h then seeded in 6-well plates in triplicates at the density of 10^5 cells per well in 2 ml medium supplemented with 10% FBS. Cells were added with 100 μM H2O2 after fixing on the plate, then incubated for 24 h. For trypan blue staining, cells were harvested with trypsin, washed once and resuspended in PBS, then added 10 μl trypan blue into cell suspension at volume ratio 1:1. Live cell ratio was determined by counting using a hemocytometer. For CV staining, cells were fixed with 10% formalin for 5 min and stained with 0.05% CV for 30 min. After washed with distilled water, cells were photographed.

U87 cells were transfected with Luciferase siRNA or CREB1 and ATF1 siRNA for 24 h and then suspended in 1 ml MEM medium supplemented with or without 100 μM H2O2 plus 20% FBS containing 0.3% agarose and plated on the firm 0.6% agarose base in the 12-well plates (2,000 cells per well). Cells were then cultured in a 37°C with 5% CO2 incubator. After 2–3 weeks, colonies were stained with 0.05% crystal violet in PBS for 1 h. Counted under a microscope and photoed after colonies turning into blue.

All experiments in this work were performed at least three times independently. Multiple groups comparison was analyzed by two-way ANOVA with multiple comparison test by GraphPad Prism 7. For experiments with only two groups, a two-tailed Student’s t-test was used to calculate the P-value. P < 0.05 was considered significant. ∗p < 0.05, ∗∗p < 0.01, ∗∗∗p < 0.001, ****p < 0.0001, NS, not significant.

This research was supported by the National Key R&D Program of China (2019YFA0801701), Tsinghua-Peking Center for Life Sciences, and National Natural Science Foundation of China (81930082) to PJ.

We thank Xiaohui Liu, Xueying Wang, and Lina Xu for the help with LC-MS analysis. We also thank all of the members of the Jiang laboratory for their technical assistance and/or discussions.

The Supplementary Material for this article can be found online at: https://www.frontiersin.org/articles/10.3389/fcell.2021.698264/full#supplementary-material

Copyright © 2021 Zhao, Xia and Jiang. This is an open-access article distributed under the terms of the Creative Commons Attribution License (CC BY). The use, distribution or reproduction in other forums is permitted, provided the original author(s) and the copyright owner(s) are credited and that the original publication in this journal is cited, in accordance with accepted academic practice. No use, distribution or reproduction is permitted which does not comply with these terms.