We used BioGRID (Stark et al., 2006) to yield the protein–protein interaction network of EP300 by inputting the identifier “EP300,” selecting the organism “Homo sapiens” and using the default settings. BioGRID (version 4.3.195)5 is a database of protein, genetic, and chemical interactions. It includes 2,015,809 protein and genetic interactions, 29,093 chemical interactions, and 1,017,123 post-translational modifications from major model organism species based on 76,264 publications.

We used Student’s t-test to compare two classes of normally distributed data, including gene expression levels, immune signature scores, and ratios of immune-stimulatory/immune-inhibitory signatures. We used the Mann–Whitney U test to compare two classes of other data that were not normally distributed. We used Fisher’s exact test to explore the association between two categorical variables. All the statistical and computational analyses were performed in the R programming environment (version 3.6.1). 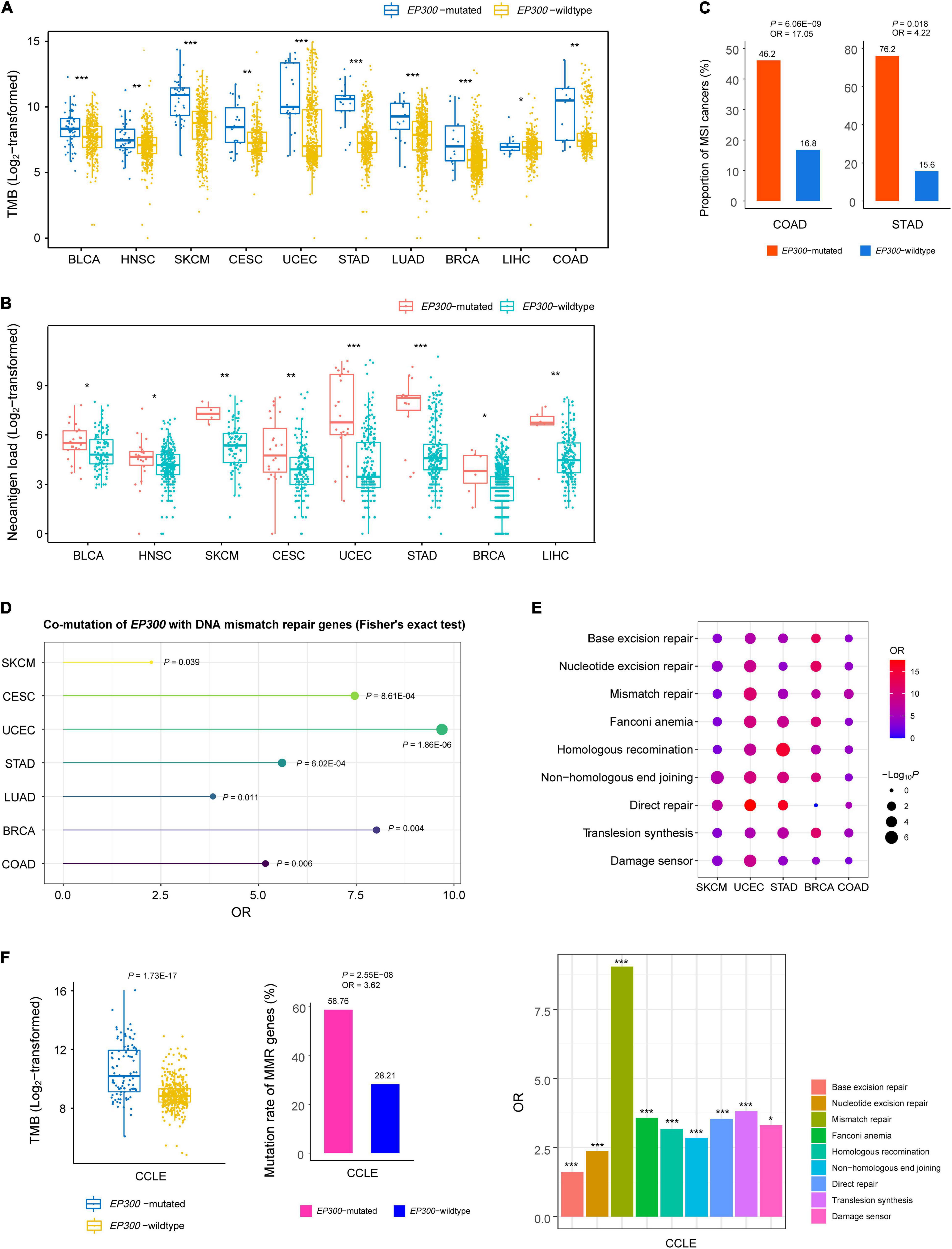 Besides the DNA mismatch repair genes, EP300 was co-mutated with a large number of other genes. In pan-cancer of the 11 cancer types, EP300 was co-mutated with 16,012 genes (FDR < 0.05, OR > 1) (Supplementary Table 2). In addition, there were 261 genes that were co-mutated with EP300 in at least five cancer types (FDR < 0.05, OR > 1) (Supplementary Table 3). Likewise, the permutation test revealed that this result was statistically significant (p < 0.0001). Again, these results suggest that EP300 mutations have a significant association with genome instability in cancer.

Taken together, these results indicate a significant association between EP300 mutations and genome instability in cancer. 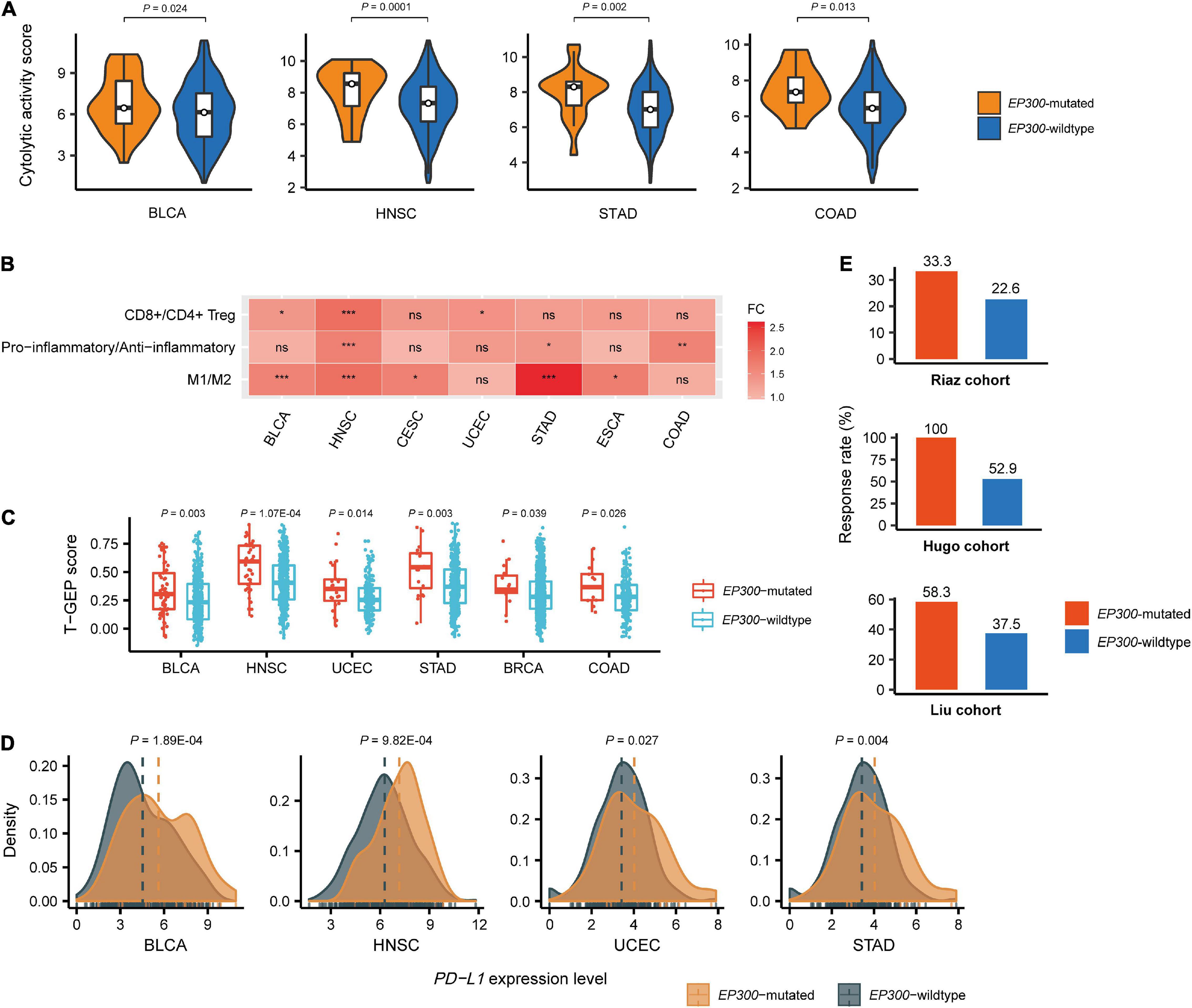 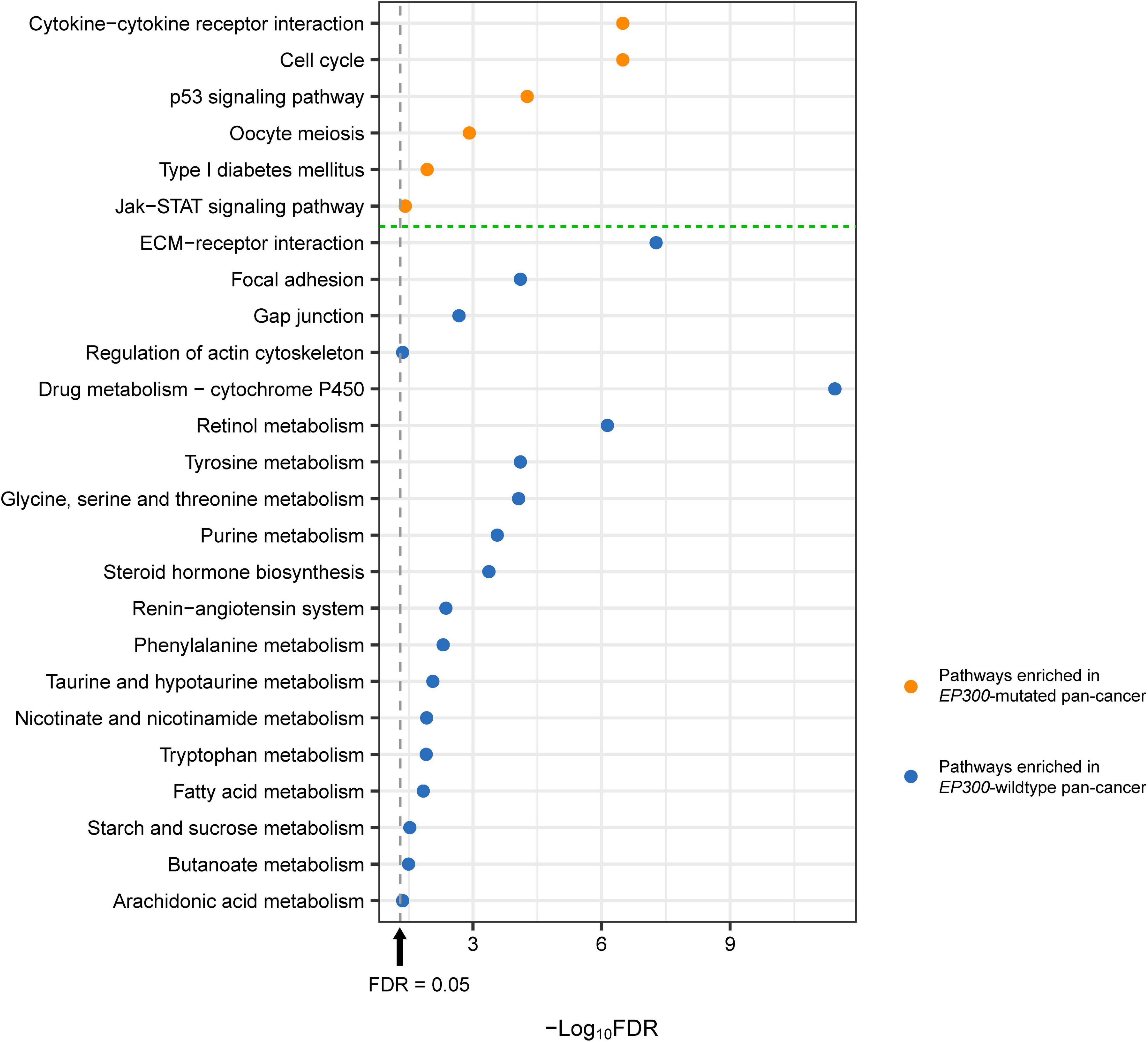 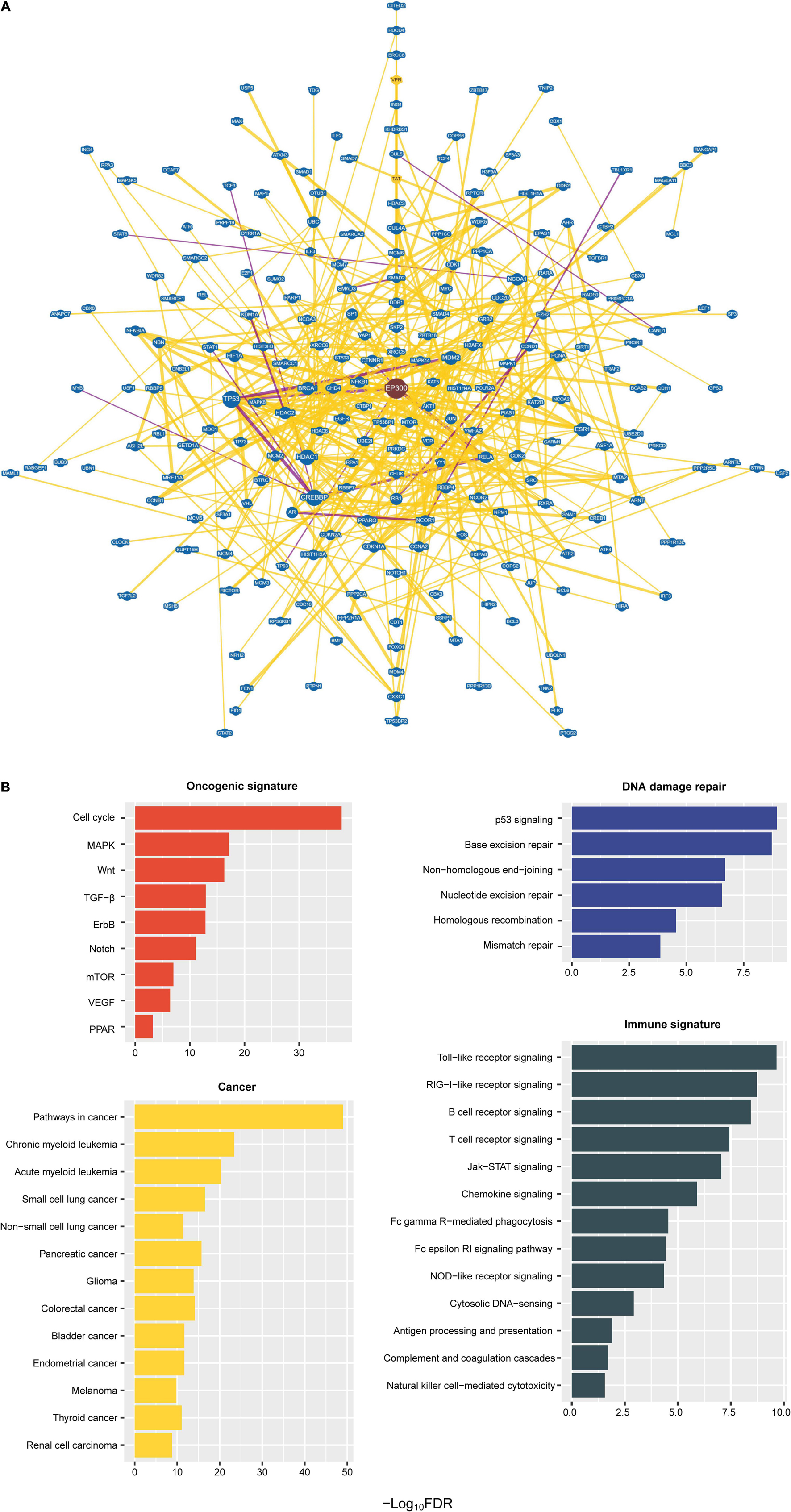 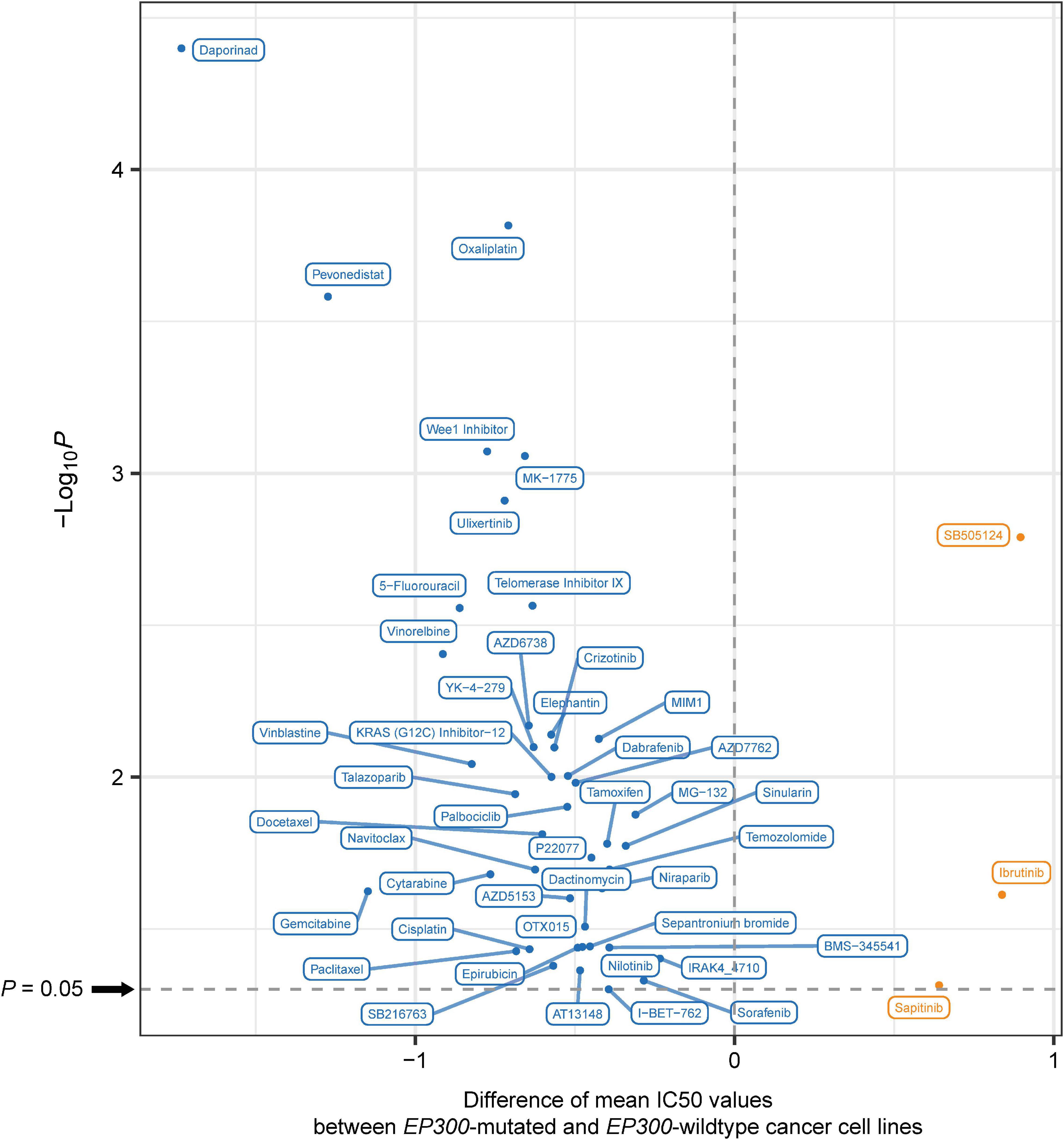 This study investigated associations of EP300 mutations with genome instability and tumor immunity by pan-cancer analysis of 11 cancer types. These cancer types included those most common cancers, such as lung, breast, colon, skin, and stomach cancers.8 We found that EP300 mutations had significant associations with genome instability (e.g., increased TMB) and increased antitumor immunity in diverse cancers (Figure 6). Moreover, EP300 mutations were associated with increased PD-L1 expression in diverse cancers. Because both high TMB and PD-L1 expression were associated with a more active response to ICIs (Ayers et al., 2017), EP300-mutated cancers would respond better to ICIs vs. EP300-wild-type cancers. This inference was evidenced in three melanoma cohorts receiving ICI therapy.

Figure 6. The mechanism by which the E1A binding protein p300 (EP300) mutation increases antitumor immunity and immunotherapeutic response in cancer.

The underlying mechanism of EP300 mutations in promoting genome instability could be that EP300 dysfunction caused by EP300 mutations compromises its DDR function. Indeed, previous studies have shown that histone acetyltransferases play significant roles in DDR (Vidanes et al., 2005; van Attikum and Gasser, 2009; Cao et al., 2016). Our data also showed that EP300 mutations were correlated with DDR deficiency, such as a high proportion of MSI cancers in the EP300-mutated subtype and co-mutation of EP300 with DNA mismatch repair and DDR pathway genes. Furthermore, because of increased TMB to create more neoantigens due to DDR deficiency, EP300-mutated cancers displayed stronger antitumor immune activity.

We found that EP300-mutated cancers more highly expressed immune (such as cytokine–cytokine receptor interaction and Jak–STAT signaling), oncogenic (such as cell cycle), and DDR (such as p53 signaling) pathways (Figure 3). Again, elevated immune activity in EP300-mutated cancers suggests that this subtype could respond better to immunotherapy since the inflamed tumor immune microenvironment may promote the response to immunotherapy (Li and Wang, 2021). Elevated cell cycle activity in EP300-mutated cancers indicates that this subtype could have a favorable response to cell cycle inhibitors. In fact, by analyzing the association between EP300 mutations and drug sensitivity of cancer cell lines, we found that EP300-mutated cancers were more responsive to several cell cycle inhibitors, including AZD7762, Wee1 inhibitor, RO-3306, palbociclib, BI-2536, MK-1775, dinaciclib, ribociclib, and MK-8776 (Figure 5).

We thank Zeinab Mohamed for editing the manuscript.

The Supplementary Material for this article can be found online at: https://www.frontiersin.org/articles/10.3389/fcell.2021.729927/full#supplementary-material

Copyright © 2021 Chen, Chen, Li, Zhang and Wang. This is an open-access article distributed under the terms of the Creative Commons Attribution License (CC BY). The use, distribution or reproduction in other forums is permitted, provided the original author(s) and the copyright owner(s) are credited and that the original publication in this journal is cited, in accordance with accepted academic practice. No use, distribution or reproduction is permitted which does not comply with these terms.