Objectives: Citrobacter freundii is a frequent cause of nosocomial infections and a known cause of diarrheal infections, and has increasingly become multidrug resistant (MDR). In this study, we aimed to determine the genetic diversity, the antimicrobial resistance profiles and in vitro virulence properties of C. freundii from diarrheal patients and healthy individuals.

Results: The 82 C. freundii isolates were divided into 76 sequence types (STs) with 65 STs being novel, displaying high genetic diversity. Phylogenetic analysis divided the 82 isolates into 5 clusters. All 82 isolates were sensitive to imipenem (IPM), but resistant to one or more other 16 antibiotics tested. Twenty-six isolates (31.7%) were multidrug resistant to three or more antibiotic classes out of the 10 distinct antibiotic classes tested. Five MDR isolates, all of which were isolated from 2014, harbored one or more of the resistance genes, blaTEM−1, blaCTX−M−9, aac(6')-Ib-cr, qnrS1, qnrB9, and qnrB13. All 11 qnrB-carrying C. freundii isolates belonged to cluster 1, and one C. freundii isolate carried a new qnrB gene (qnrB92). Six isolates showed strong cytotoxicity to HEp-2 cells, one of which was multidrug resistant.

In this study, we analyzed the genetic diversity and antimicrobial resistance profiles of 82 C. freundii isolates from diarrheal outpatients and healthy individuals in Maanshan, Anhui Province, China. We investigated the prevalence of blaCTX−M, blaSHV, blaTEM, qnrA, qnrB, qnrS, qnrC, qnrD, aac(6')-Ib-cr, and qepA genes and determined the adhesion and cytotoxicity to HEp-2 cells of the isolates.

Eighty-two C. freundii isolates were obtained from 62 diarrheal outpatients and 20 healthy individuals from 2014 to 2016 in Maanshan Anhui Province, China. Fifteen of the 62 diarrheal patient fecal samples harbored other known enteric bacterial or viral pathogens (Table 1). The identity of each isolate was determined using API 20E test strips (bioMérieux, La Balme les Grottes, France) at the time of isolation, and isolates were stored as glycerol stocks at – 80°C. Bacteria were grown in Luria-Bertani (LB) broth or on LB and Mueller–Hinton agar plates (pH 7.4) at 37°C.

In Vitro Adhesion and Cytotoxicity Assays

The lactate dehydrogenase (LDH) released by the HEp-2 cells was determined using the Cytotox96 kit (Promega) according to the manufacturer's instructions. The relative amount of cytotoxicity was expressed as previously described (Liu et al., 2017a). All experiments were performed three times in duplicate.

SPSS software version 13.0 (SPSS Inc., Chicago, IL, USA) was used to conduct all statistical comparisons. A nonparametric test (Mann–Whitney U-test) was employed to compare the different groups. Two-tailed p-value of 0.05 or less was considered to be statistically significant.

A phylogenetic tree for the 82 isolates was constructed using the neighbor-joining algorithm based on the concatenated sequences of the seven housekeeping genes (Figure 1). Salmonella LT2 was used as an outgroup. The tree could be divided into five clusters with robust bootstrap support of the major divisions. Cluster 1 was a predominant cluster containing 26 STs. C. freundii isolates from diarrheal patients and healthy individuals were distributed among different clusters (Figure 1). 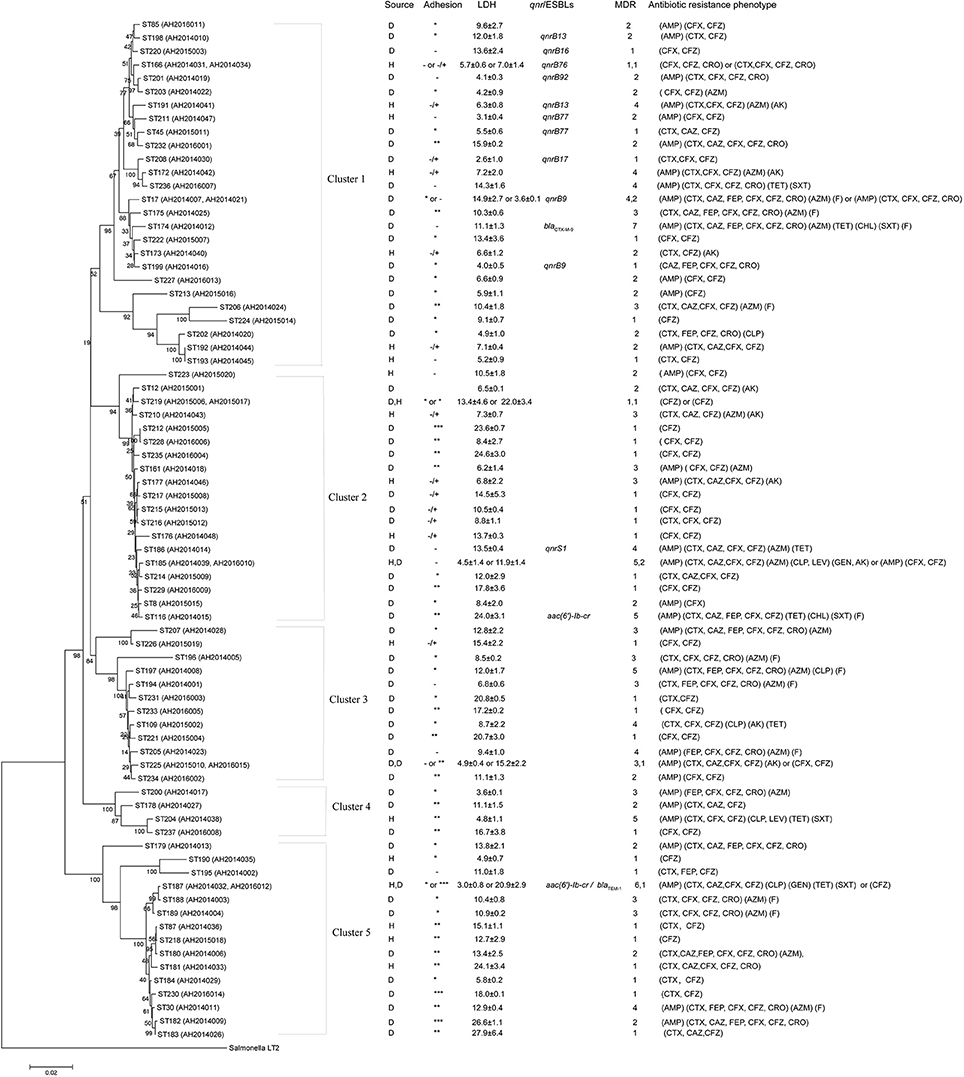 Figure 1. Phylogenetic relationships as determined by MLST data. The presence of ESBLs and qnr genes, MDR (number of drugs resistant to), adhesion, LDH and antibiotic resistance phenotype among C. freundii isolates were shown on the right. The tree was constructed using neighbor joining algorithm. ST, D, H, and LDH indicate sequence types, isolates from diarrheal patients and healthy individuals, and lactate dehydrogenase respectively. Cluster divisions are marked. Numbers on or near the nodes are bootstrap values from 1,000 replicates.

The 82 C. freundii isolates were tested for susceptibility to 17 antibiotics belonging to 10 antibiotic classes using the disk diffusion method according to CLSI recommendations (Table 2). Most of the 82 C. freundii isolates were resistant to β-lactams, especially to penicillins (41.5%), cephalosporins (19.5–98.8%) and monobactams (25.6%). Resistance to the two quinolones (ciprofloxacin and levofloxacin) tested was 7.3 and 2.4%, respectively; resistance to other antibiotics included aminoglycosides (2.4–11.0%), phenicols (2.4%), sulfonamides (6.1%), tetracyclines (8.5%), and nitrofuran (13.4%) (Table 2). 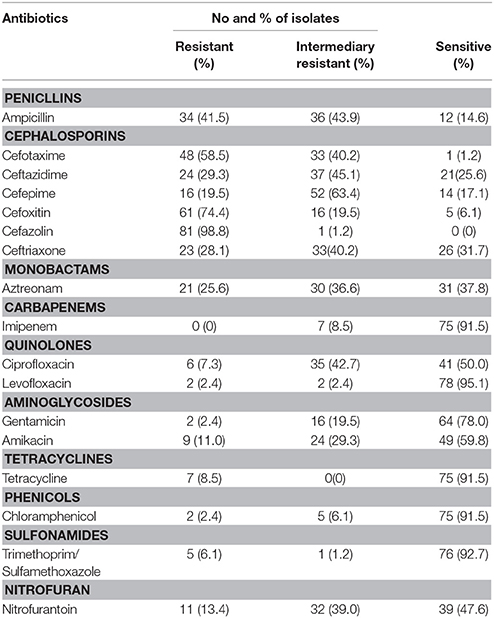 Twenty-six isolates were multidrug resistant (MDR), with resistance to at least one antibiotic of three or more distinct classes (MDR ≥ 3). Of the 26 MDR isolates, 23 were isolated from 2014, two were from 2015 and one were from 2016 (Table 1).

The 26 MDR isolates were distributed in 5 clusters, and mainly in cluster 1 and 3 which included 7 MDR isolates, respectively (Figure 1 and Table 1).

One isolate (AH2014019) was found to harbor a new qnrB gene. Sequence analysis revealed that it differed from the qnrB76 gene by two nucleotide changes (GenBank accession no.KM985469.1). One, a T → G change at nt469 resulted in Ser → Ala, while the other, a C → T change at nt391 was synonymous. Hence this new qnrB allele is designated as qnrB92 (GenBank accession no. MG744557), a new variant of the qnrB gene, in accordance with the qnr nomenclature rules of Jacoby et al. (2008).

The 82 C. freundii isolates were tested for cytotoxicity to cultured HEp-2 cells by measuring the amount of lactate dehydrogenase (LDH) released by HEp-2 cells. The released LDH levels ranged from 3.0 to 27.9% (Table 1). C. freundii strains CF74 and CF72 were used as positive and negative controls of cytotoxicity respectively (Liu et al., 2017a). The levels of LDH released by CF74 and CF72 were 24.5 and 8.1%, respectively. Six isolates released LDH more than 24%, showing high cytotoxicity (Table 1). Among these six isolates, two isolates showed strongest adherence while other four isolates showed intermediate adhesion (Table 1 and Figure 2). Another five isolates released LDH from 18.0 to 22.0% and are considered intermediate cytotoxic. The remaining 71 isolates showed LDH release less than 17.8% and are likely to be non-cytotoxic (Table 1). 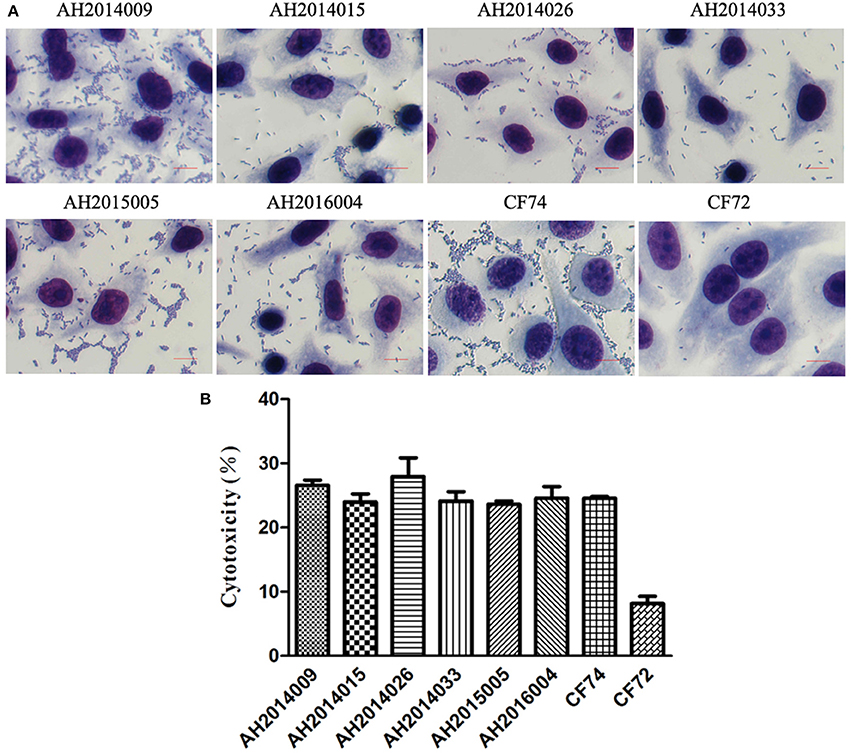 C. freundii is a recognized emerging opportunistic pathogen and has been implicated in gastroenteritis and foodborne outbreaks (Ifeadike et al., 2012; Settanni et al., 2013). A most recent foodborne outbreak reported in Germany was caused by a novel ST (Pletz et al., 2018). In this study, we examined 82 isolates of C. freundii obtained from 62 diarrheal patients from the majority of whom no other pathogens were isolated and also from 20 healthy individuals to assess the genetic diversity and antimicrobial resistance and in vitro virulence phenotypes.

In this study, we analyzed isolates from both diarrheal patients and healthy individuals in an attempt to further understand the genetic diversity of potential diarrheagenic C. fruendii. Majority of the diarrheal cases had no other pathogens isolated with C. freundii being possibly the causal organism. However, there is no separation of isolates from clinical cases and healthy individuals. Some of the diarrheal patients also had other pathogens isolated. There was no distinction of the isolates from these different sources by STs, phylogenetic clusters or adhesion/cytotoxicity phenotypes. Among the 82 C. freundii isolates we obtained from diarrheal outpatients and healthy individuals, 25 (30.5%) of the isolates showed moderate to strong adhesion. Among these 25 adhesive isolates, 9 isolates showed moderate to strong cytotoxicity, indicating their pathogenic potential. Interestingly, adhesiveness and cytotoxicity were clustered by phylogenetic clusters. Nine (56%) and five (31%) of the 16 isolates in cluster 5 showed intermediate/strong adhesion and intermediate/high cytotoxicity, respectively. In comparison, only three (11%) and none (0%) of the 28 cluster 1 isolates were adhesive or cytotoxic respectively. All strongest adhesive and highly cytotoxic isolates belonged to cluster 2 or 5. Clearly there is a difference in virulence between clusters by the measures of in vitro virulence properties. However, both cluster 1 and cluster 5 are similarly likely to be isolated from healthy individuals with 8 of the 28 and 5 of the 16 isolates respectively. Further work is required to determine their difference in pathogenicity and disease.

C. freundii is often resistant to multiple classes of antibiotics, suggesting that both clinical and environmental strains may be a reservoir of antimicrobial resistance determinants (Pepperell et al., 2002; Gupta et al., 2003; Nada et al., 2004; Yim et al., 2013; Feng et al., 2015; Leski et al., 2016a; Sheppard et al., 2016). MDR C. freundii strains have been associated with a higher rate of in-hospital mortality compared to susceptible strains (Leski et al., 2016b). A survey of outpatients in Sierra Leone revealed that C. freundii isolates from UTIs were highly MDR with 22 isolates resistant to >7 antibiotics out of the 11 tested, and 81.8% of the isolates produced ESBLs (Leski et al., 2016b). In this study, we surveyed C. freundii from diarrheal outpatients, 30.6% isolates were resistant to ≥3 antibiotic classes out of the 10 distinct antibiotic classes tested. One MDR isolate was strongly cytotoxic. Such highly cytotoxic MDR strains may cause more severe disease and their MDR properties may limit clinical therapeutic options when they cause disease.

ESBLs in C. freundii have been widely reported (Fernandes et al., 2014; Liu et al., 2017b). In 36 blood C. freundii isolates from a Taiwanese hospital, 16.7% of the isolates carried the blaTEM−1 gene and 5.6% carried blaSHV−12 or blaCTX−M−15 (Liu et al., 2017b). In this study, we did not test for ESBL phenotype but screened by PCR for blaCTX−M, blaTEM and blaSHV genes. We found one isolate each blaCTX−M−9 and blaTEM positive, but none blaSHV positive (Table 3).

Resistance to ciprofloxacin was lower in both our previous study and this study at 13.0% (8/62) and 7.3% (6/82) respectively. This difference may be regional. There seems to be regional difference in the prevalence of qnr and aac(6')-Ib-cr genes as discussed above. Our studies were conducted in one region of China which may differ in the prevalence of ciprofloxacin resistance from other regions in China and from other countries (Park et al., 2007; Yang et al., 2008; Zhang et al., 2012). It is also possible that the low prevalence was due to the source of the isolates. Isolates for our previous study and for this study were from food and from outpatients respectively, while the high rate reported in India was from isolates from hospitalized patients (Mohanty et al., 2007).

We isolated 82 C. fruendii isolates from human diarrheal outpatients and healthy individuals in Maanshan, Anhui Province, China and found a high diversity of the isolates by sequence types with 65 STs being novel. Eleven STs were found in the MLST database which contained isolates from different sources and/or geographic regions. The isolates varied in in vitro virulence phenotypes (adhesion and cytotoxicity) with most isolates in phylogenetic cluster 5 being adhesive and cytotoxic. Prevalence of MDR of three or more antibiotic classes out of the 10 distinct antibiotic classes tested was at 31.7%. Each of the blaCTX−M−9, blaTEM−1, qnrS1 and aac(6')-Ib-cr genes was detected in one C. freundii isolate. Six isolates that showed strong cytotoxicity to HEp-2 cells, one of which was multidrug resistant. We also found a new qnrB gene (qnrB92) in one C. freundii isolate. This study has shed more light on the genetic diversity, pathogenicity and antibiotic resistance of C. fruendii.

Copyright © 2018 Liu, Chen, Liu, Lan, Hao, Jin, Sun, Wang, Liang and Xu. This is an open-access article distributed under the terms of the Creative Commons Attribution License (CC BY). The use, distribution or reproduction in other forums is permitted, provided the original author(s) and the copyright owner(s) are credited and that the original publication in this journal is cited, in accordance with accepted academic practice. No use, distribution or reproduction is permitted which does not comply with these terms.