Potential Pandemic of H7N9 Avian Influenza A Virus in Human

Since 2013, the H7N9 avian influenza A virus (AIV) has caused human infections and to the extent of now surpassing H5N1. This raises an alarm about the potential of H7N9 to become a pandemic problem. Our compilation of the amino acid changes required for AIVs to cross the species-barrier discovers 58 that have very high proportions in both the human- and avian-isolated H7N9 viruses. These changes correspond with sporadic human infections that continue to occur in regions of avian infections. Among the six internal viral genes, amino acid changes do not differ significantly between H9N2 and H7N9, except for V100A in PA, and K526R, D627K, and D701N in PB2. H9N2 AIVs provide internal genes to H7N9. Most of the amino acid changes in H7N9 appear to come directly from H9N2. Seventeen amino acid substitutions appear to have fixed quickly by the 5th wave. Among these, six amino acid sites in HA1 are receptor binding sites, and PB2-A588V was shown to promote the adaptation of AIVs to mammals. The accelerated fixation of mutations may promote the adaptation of H7N9 to human, but need further functional evidence. Although H7N9 AIVs still cannot efficiently transmit between humans, they have the genetic makeup associated with human infections. These viruses must be controlled in poultry to remove the threat of it becoming a human pandemic event.

The H7N9 avian influenza virus (AIV) is a triple reassortant virus having hemagglutinin (HA) and neuraminidase (NA) genes from migratory birds and six internal genes from chicken H9N2 AIVs (Lam et al., 2013; Liu et al., 2013). This dangerous virus has triggered five epidemics of human infections in China since 2013 (Iuliano et al., 2017; Wang et al., 2017) causing severe respiratory diseases and many fatalities (Chen et al., 2013). Although H7N9 does not have the capability for sustained human–human transmission, it has surpassed H5N1 in laboratory-confirmed human infections despite its limited dissemination outside of China (Webby and Yang, 2017). The 5th wave of human infection, which occurred from September 2016 to April 2017, started earlier than usual and saw rapid growth with 623 confirmed infections (Wang et al., 2017). This raises concerns about the potential ability of the virus to better develop an ability to infect human, and eventually attain efficient human–human infections. This would drive a global pandemic event.

Wild aquatic birds are the reservoir for AIVs and, fortunately, the viruses rarely infect humans. To infect humans, AIVs possess adaptive changes in some amino acid needed to fit the environment of their new host (Xiang et al., 2018). Molecular mechanisms that enable AIVs to cross the species-barrier and allow efficient transmission in mammals have been studied widely, and many amino acid changes have been suggested to play roles in these processes (Mertens et al., 2013; Schrauwen and Fouchier, 2014; Xiang et al., 2018). These genotypic markers facilitate assessments of the risk and likelihood of transmission from birds to mammals based on their genome sequences alone. Surveillance is crucial to track the emergence, evolution and spread of AIVs. Genotype data from the AIVs can be used further to identify and predict viruses that pose the greatest threat to human and animal health.

Herein, we assess the potential of H7N9 to drive a pandemic event. We collect all available H7N9 sequence data and identify changes at all amino acid sites known to play roles in crossing the species-barrier. This allows us to predict the potential transmission and pathogenicity in humans. Because H7N9 has frequently reassorted and attained internal genes from H9N2 viruses (Lam et al., 2015; Shi et al., 2017), we compare the distribution of six internal genes between H7N9 and H9N2. Finally, because the 5th wave had a rapid growth in cases of human infection, we assess the proportion and potential fixation of enabling amino acid changes in this wave.

Source of Sequences and Preliminary Treatment

Analyses of the Proportion of Molecular Markers

We identified 259 amino acid mutations in the literature reported to be associated with changes in host tropism or increased pathogenicity in mammals (Supplementary Table 1).

Figure 1. Changes in the proportion of 10 amino acid substitutions in HA and four in NA of H7N9 viruses. (A) HA. (B) NA.

Figure 2. Changes in the proportion of 13 amino acid substitutions in PB2 of H7N9 and H9N2 viruses.

In comparisons of H7N9 and H9N2, the former has high proportions of the amino acid changes V100A in PA and K526R, E/D627K/N, and D701N in PB2. In comparison, one in three sequences (33.33%) of H9N2 has amino acid change E/D627K/N in wave 4, and one in four sequences (25%) have change D701N in wave 3. However, the relatively high proportions of these two mutations may reflect a bias of having few available sequences.

Fixation of 17 Amino Acid Sites in the 5th Wave 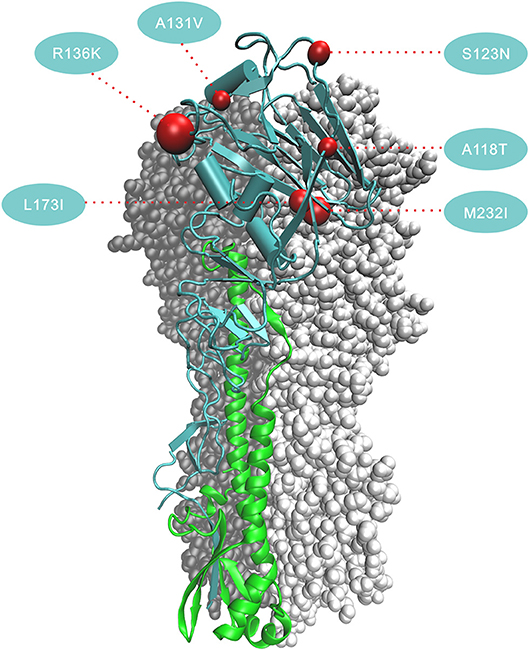 Figure 4. Positions of the six amino acid changes that fixed in the 5th wave in HA1 in the 3D structure of HA. The three-dimensional structure of HA is from avian-origin H7N9 influenza virus (A/Shanghai/1/2013) [PDB code: 4LCX]. Monomer shows subunit HA1 in blue and subunit HA2 in green. Numbers in the colored circles denote codon alignment number and red spheres show their locations in the three-dimensional structure. All amino acid changes occurring in HA1 (A118T, S123N, A131V, R136K, L173I, and M232I) locate in the receptor-binding region and in close proximity to the antigenic site.

Recent research on gain-of-function has identified genetic changes required for AIVs to cross the species-barrier and adapt to replication and transmission in mammals. Our compilation of these genetic changes (Supplementary Table 1) and surveillance data serve to predict that H7N9 poses a great threat to humans.

A series of amino acid changes suggested to enhance polymerase activity and increase virulence in mammals have very high proportions in both the human- and avian-isolated H7N9 viruses (Supplementary Table 2). This further suggests that avian-isolated H7N9 viruses may have potential ability to infect human. H7N9 AIVs not only increase their receptor binding properties, but also enhance their polymerase activity and, thus, increase their virulence in mammals. This best explains the continuing, sporadic occurrence of human infections in China since its emergence in 2013. This also raises a red flag with respect to their continuing threat to public health.

Six internal genes of H9N2 AIVs have very high proportions in a series of amino acid changes that associate with changes in host tropism or increased pathogenicity (Supplementary Table 2). This suggests that H9N2 also potentially possess the ability to infect human. H9N2 AIVs isolated in recent years preferentially bound to human-like receptors (Li et al., 2014; Kang and Jang, 2017), and sporadic human infections have been reported (Peiris et al., 1999; Butt et al., 2005; Gu et al., 2017). For these sites, except for V100A in PA, and K526R, D627K, and D701N in PB2, H9N2, and H7N9 do not differ significantly at other amino acid changes. H9N2 provided internal genes to H7N9 (Lam et al., 2015; Pu et al., 2015; Gu et al., 2017; Shi et al., 2017; Yang et al., 2017). Thus, most of the amino acid changes in H7N9 came directly from H9N2. E627K in PB2, which is the best characterized mammalian adaptive mutation (de Wit et al., 2010), has very high proportions only in human-isolated H7N9 viruses. The D701N substitution in PB2 was found to increase virulence, and to expand the host range of avian H5N1 to mammals in the absence of E627K (Steel et al., 2009). A few human-isolated H7N9 viruses have this amino acid change, which suggests that some adaptive amino acid changes occurred during their host-shift.

The 5th wave of human infection saw a rapid growth in the number of cases (Wang et al., 2017). Have H7N9 AIVs experienced an accelerated fixation of beneficial adaptations to the environmental of human? In addition to the known amino acid mutations associated with changes in host tropism or increased pathogenicity in mammals, our analyses detect a trend for the fixation of 17 amino acid changes in the 5th wave (Figure 3). Among these, six amino acids sites substituted in HA1 locate at receptor binding region (Figure 4). Amino acid change PB2-A588V which showed much higher proportion in human-isolated than avian-isolated H7N9 in the 5th wave, was proved to promote the adaptation of H7N9 to mammals (Xiao et al., 2016). This might explain the increased number of human infection cases in the 5th wave. The function of other sites needs further experimental study.

H7N9 AIVs have continuously evolved since 2013. Although they have triggered five epidemics of human infections, they still do not have efficient human-human transmission, and only fix to avian. Our analyses identify a series of amino acid changes that associate with cross-species transmission from avian to human in high proportions in both human- and avian-isolated H7N9 AIVs. Avian-isolated H7N9 viruses have the genetic makeup associated with human infections and this suggests that if we cannot control this subtype in poultry, an impending human pandemic is still on the doorstep.

This work was supported by the National Natural Science Foundation of China (No.31822056), Guangdong Natural Science Funds for Distinguished Young Scholar (2014A030306046), and start-up funding from South China Agricultural University for YS.

The Supplementary Material for this article can be found online at: https://www.frontiersin.org/articles/10.3389/fcimb.2018.00414/full#supplementary-material

Supplementary Figure 1. Changes in the proportion of 11 amino acid substitutions in PB1 of H7N9 and H9N2 viruses.

Supplementary Figure 2. Changes in the proportion of 10 amino acid substitutions in PA of H7N9 and H9N2 viruses.

Supplementary Figure 3. Changes in the proportion of five amino acid substitutions in MP, six in NS and four in NP of H7N9 and H9N2 viruses. (a) MP. (b) NS. (c) NP.

Supplementary Table 1. Genetic changes reported to be associated with changes in host tropism or increased pathogenicity in mammals. The H5 numbering system was used to identify nucleotide positions in our analysis.

Supplementary Table 2. The proportion of 63 amino acid substitutions that associated with AIVs to infect mammals in H7N9 and H9N2 viruses. 58 of them have very high proportions not only in human-isolates, but also in avian-isolated H7N9 AIVs.

Supplementary Table 3. GenBank/GISAID accession numbers of viruses that used in this study.

Copyright © 2018 Pu, Xiang, Li, Luo, Shen, Murphy, Liao and Shen. This is an open-access article distributed under the terms of the Creative Commons Attribution License (CC BY). The use, distribution or reproduction in other forums is permitted, provided the original author(s) and the copyright owner(s) are credited and that the original publication in this journal is cited, in accordance with accepted academic practice. No use, distribution or reproduction is permitted which does not comply with these terms.