Dissemination of Carbapenemases (KPC, NDM, OXA-48, IMP, and VIM) Among Carbapenem-Resistant Enterobacteriaceae Isolated From Adult and Children Patients in China

This study aimed to investigate the dissemination and characteristics of blaKPC, blaNDM, blaOXA-48-like, blaIMP, and blaVIM among the carbapenem-resistant Enterobacteriaceae (CRE) strains isolated from adult and children patients. A total of 935 non-duplicate CRE strains were collected from 36 hospitals in 24 provinces or cities across China from 2016 to 2018. Antimicrobial susceptibility testing was performed by broth microdilution method and carbapenemase genes blaKPC, blaNDM, blaOXA-48-like, blaIMP, and blaVIM were screened by PCR and confirmed by DNA sequencing. Overall, carbapenemases were produced in 97.4% (911/935) of CRE strains, including KPC-2 (51.6%, 482/935), NDM (35.7%, 334/935), and OXA-48-like carbapenemases (7.3%, 68/935). Overall, the most prevalent carbapenemase gene was blaKPC-2 among Klebsiella pneumoniae (64.6%, 457/709) and the CRE strains isolated from adult patients (70.3%, 307/437), and blaNDM among Escherichia coli (96.0%, 143/149) and the CRE strains from children (49.0%, 247/498). The blaOXA-232-positive carbapenem-resistant K. pneumoniae (9.3%, 66/709) were all isolated from children. Sixteen strains were positive for blaIMP and 9 strains produced multiple carbapenemases. No strain was positive for blaVIM. Most of the CRE strains (>90%) were resistant to cephalosporins and carbapenems, more than half (>50%) were resistant to aminoglycosides and fluoroquinolones, but the majority (95.8 and 98.4%) were susceptible to polymyxin B and tigecycline. Ceftazidime-avibactam showed excellent in vitro activity against blaKPC-2 and blaOXA-48-like positive strains (100% susceptible). In China, KPC-2, NDM, and OXA-48-like carbapenemases were predominant among CRE clinical isolates. The most prevalent carbapenemase gene was blaKPC-2 among K. pneumoniae isolates from adult patients, and blaNDM among E. coli isolates from children.

Enterobacteriaceae are opportunistic pathogens causing severe hospital-acquired infections (Feil, 2016). The spread of carbapenemase-producing Enterobacteriaceae (CPE) has been a global threat to public health. Carbapenems have conventionally been used for treating infections caused by extended-spectrum β-lactamase-producing Escherichia coli and Klebsiella pneumoniae, and are still considered as last resort antibiotics to date (van Duin and Doi, 2016). According to the data from China Antimicrobial Surveillance Network (CHINET, www.chinets.com), the resistance rate of K. pneumoniae to meropenem and imipenem rapidly increased from 2.9 and 3.0% in 2005 to 26.3 and 25% in 2018, respectively. In Europe, carbapenem-resistant K. pneumoniae are most widespread in the Mediterranean and Balkan countries with a prevalence of 60% in Greece and 40% in Italy, respectively (Perez and Villegas, 2015; Feil, 2016). The production of carbapenemases including KPC, NDM, and OXA-48-like is the most common resistance mechanism among carbapenem-resistant Enterobacteriaceae clinical isolates (Nordmann et al., 2012; Goodman et al., 2016). The blaKPC-positive Enterobacteriaceae were widespread in the United States, Latin America, Italy, Greece, the Middle East, and China (Albiger et al., 2015; Feil, 2016; Villegas et al., 2016; Iovleva and Doi, 2017). The blaNDM-positive Enterobacteriaceae were widespread in India, Pakistan, Bangladesh, Italy, Poland, Denmark, Latin America, and African countries (Yong et al., 2009; Albiger et al., 2015; van Duin and Doi, 2016). The blaOXA−48−like-positive strains remained rare in the US, in contrast to the prevalence in Turkey, Spain, France, Belgium, Romania, Middle East, Africa, Asia, and South America as well (Albiger et al., 2015). These infections are usually associated with very poor prognosis and high mortality, especially in neonates or high-risk immunocompromised patients (Falagas et al., 2014; Feil, 2016). In China, the presence of blaKPC and blaNDM is responsible for phenotypic resistance in most of the CRE strains (Zhang et al., 2017; Wang et al., 2018). Most researches currently focus on the dissemination of carbapenemases among CRE strains isolated from adult patients, while only a few are available to investigate the distribution of carbapenemases among CRE strains isolated from children. To obtain the comprehensive characteristic of carbapenemases among CRE isolated from both adults and children patients in China, we conducted this study to characterize the dissemination and characteristics of carbapenemases (including KPC, NDM OXA-48, IMP, and VIM) among CRE clinical isolates and the susceptibility to antimicrobial agents. 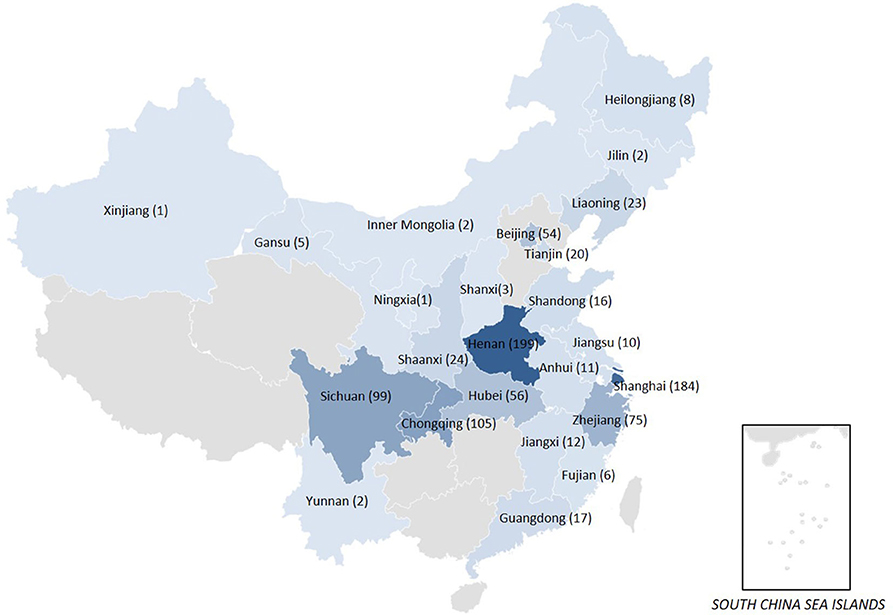 Figure 1. The map of CRE clinical strains collected from 24 provinces or cities in China.

Detection of Carbapenemase and mcr-1 Genes

All the CRE strains were tested for the presence of the most common carbapenemase genes (blaKPC, blaNDM, blaOXA-48-like, blaIMP, and blaVIM) by polymerase chain reaction (PCR) with specific primers and conditions as described previously (Poirel et al., 2011; Liu et al., 2016). The colistin resistance gene mcr-1 was also detected by PCR, as previously described (Liu et al., 2016). The positive PCR amplicons were sequenced and compared with the reported sequences from GenBank by Blast (www.ncbi.nlm.nih.gov/blast/).

Descriptive statistics were used to summarize the epidemiologic characteristics of CRE strains. For categorical variables, the percentage of CRE strains in each category was calculated. All analyses were performed using WHONET (version 5.6) and the IBM SPSS Statistics (version 21).

Most of the CRE strains (>90%) were resistant to cephalosporins, piperacillin, cefoperazone-sulbactam, piperacillin-tazobactam, aztreonam, and carbapenems. Overall, 61.4, 50.1, and 45.2% of the strains were susceptible to ceftazidime-avibactam, amikacin, and trimethoprim-sulfamethoxazole, respectively, followed by gentamicin (31.8%), levofloxacin (22.9%), ciprofloxacin (19%), and nitrofurantoin (18.8%). Polymyxin B and tigecycline showed excellent antibacterial activity against CRE strains (95.8 and 98.4% susceptible, respectively) (Table 1). Ceftazidime-avibactam had potent activity against both KPC-2-producing and OXA-48-like producing Enterobacteriaceae (100% susceptible) and inhibited all of blaKPC-2-positive and blaOXA-48-like-positive strains at 8 mg/L. However, all NDM-producing Enterobacteriaceae were resistant to ceftazidime-avibactam (MIC90 > 32 mg/L). The MICs of ceftazidime-avibactam were higher than 32 mg/L against IMP- and multi-carbapenemase producing Enterobacteriaceae (KPC and NDM co-producers, NDM and OXA-48 co-producer). Most of the blaNDM-positive strains were susceptible to amikacin (86.2% susceptible) (Table 1). 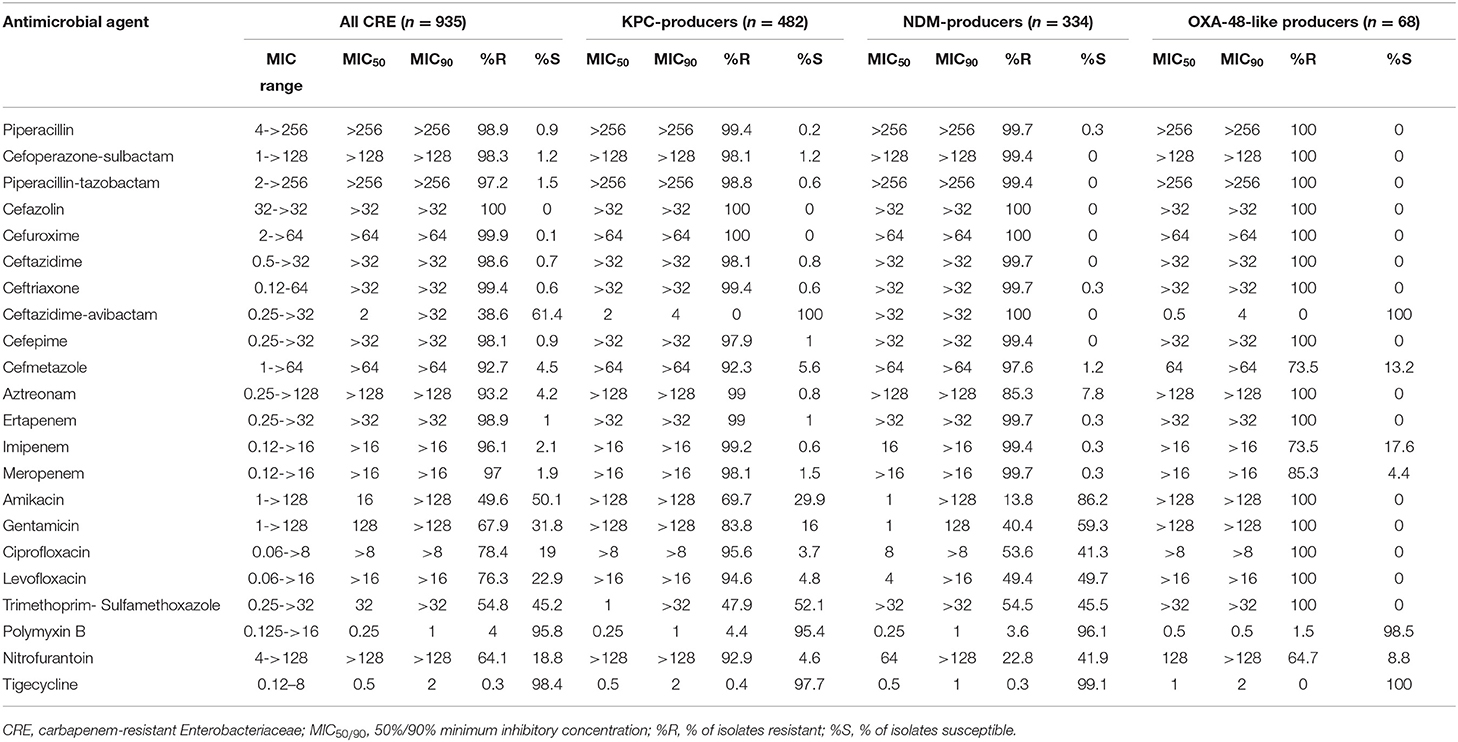 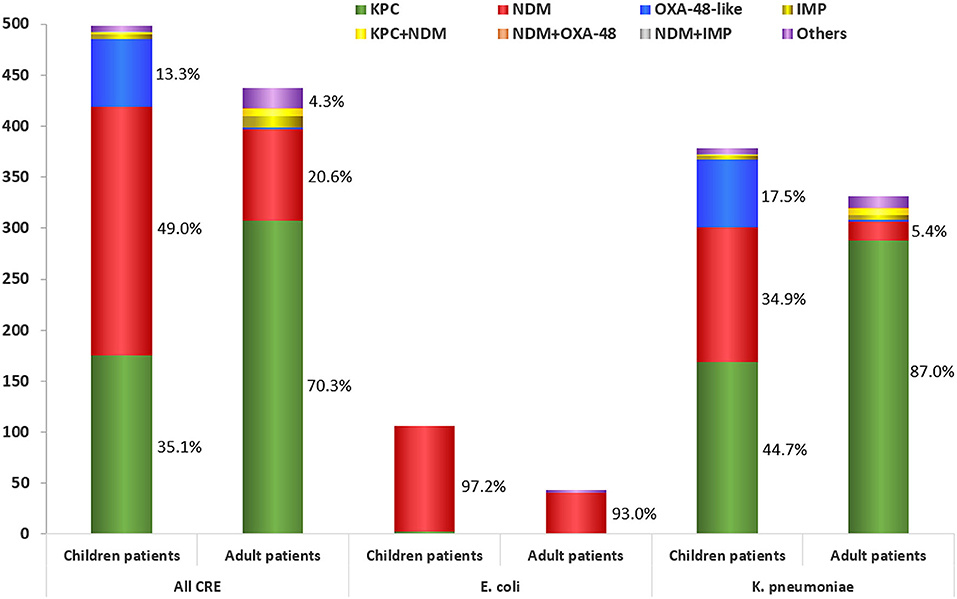 Previous studies have proved that the presence of carbapenemase genes, including blaKPC-2 and blaNDM, was the major mechanism of carbapenem resistance among CRE strains in China, which were the most prevalent in K. pneumoniae and E. coli, respectively (Zhang et al., 2017; Wang et al., 2018). However, the researches on CRE strains isolated from children patients are limited in China. This study provided a comprehensive and updated carbapenemase profile of 935 CRE strains isolated from both adult and children patients. We found that blaKPC-2 (51.6%) and blaNDM (35.7%) were the most common carbapenemase genes among CRE strains, while the emergence of blaOXA-232, blaIMP, and other multi-carbapenemase genes have been increasing in recent years. KPC-2 was the most frequently detected carbapenemase gene in K. pneumoniae, while NDM was the most prevalent one in E. coli. This pattern in China is significantly different from that in Europe. In Europe, the prevalence of OXA-48-like producing Enterobacteriaceae was 38% (333/927), next to KPC- (42%, 393/927), but higher than NDM-producing Enterobacteriaceae (12%, 113/927) (Grundmann et al., 2017). The distribution of carbapenemase-producers also varied with bacterial species. In K. pneumoniae, KPC-producers were the most prevalent, followed by OXA-48-like (37%, 310/850) and NDM-producers (11%, 93/850). In E. coli, OXA-48-like producers were the most prevalent (56%, 43/77), followed by NDM- (26%, 20/77) and KPC-producers (18%, 14/77). K. pneumoniae and E. coli were the two main species in China with a ratio of 5:1 (4:1 in children, 8:1 in adults) in this study, which differed from the prevalence trends (ratio of 11:1) in EuSCAPE (Grundmann et al., 2017).

All of the CRE strains were highly resistant to cephalosporins, carbapenems, aminoglycosides, and fluoroquinolones but susceptible to polymyxin B and tigecycline. Ceftazidime-avibactam, launched last year in China, showed excellent in vitro antibacterial activity against both KPC-2- and OXA-48-like producers, but not active against metallo-β-lactamases producers. Most (86.2%) of NDM-producers were susceptible to amikacin. In addition, we found a blaNDM-5 and mcr-1 co-harboring E. coli resistant to polymyxin B. These findings limited the utility of ceftazidime-avibactam and polymyxin B and prompted the development of novel or combinational therapies to combat CRE strains. For example, aztreonam plus meropenem-vaborbactam and aztreonam plus ceftazidime-avibactam showed good antibacterial activity against NDM- and non-OXA-48-like producing Enterobacteriaceae (Biagi et al., 2019). The combination of colistin and amikacin showed consistently bactericidal against NDM-5-bearing mcr-1-positive E. coli, which might be an alternative therapeutic option for the treatment of lethal infections (Zhou et al., 2017).

In conclusion, KPC-2, NDM, and OXA-48-like enzymes were the most prevalent carbapenemases among CRE clinical isolates in China. The most prevalent carbapenemase gene was blaKPC-2 among K. pneumoniae isolated from adult patients, and blaNDM among E. coli isolates from both children and adult patients. The blaOXA-232 was only detected among K. pneumoniae isolates from children.

The study protocol was approved by the Institutional Review Board of Huashan Hospital, Fudan University (Number: 2018-408).

The reviewer YY declared a shared affiliation with one of the authors RZ to the handling editor at time of review.

Copyright © 2020 Han, Shi, Wu, Yin, Peng, Dong, Zheng, Guo, Zhang, Hu and the China Antimicrobial Surveillance Network (CHINET) Study Group. This is an open-access article distributed under the terms of the Creative Commons Attribution License (CC BY). The use, distribution or reproduction in other forums is permitted, provided the original author(s) and the copyright owner(s) are credited and that the original publication in this journal is cited, in accordance with accepted academic practice. No use, distribution or reproduction is permitted which does not comply with these terms.

Enterobacteriaceae Antimicrobial Agents and Resistance: Relationship with the Therapeutic Approach