Polymyxin B (PMB) and colistin, called polymyxins, are two of the few drugs available for selection, showing high antibacterial activity against common clinically isolated Gram-negative bacilli. As the CLSI described, colistin and polymyxin B are considered equivalent agents, so MICs obtained from testing colistin predict MICs to polymyxin B and vice versa (Wayne, 2021). Polymyxins were first discovered in the 1940s. It is a group of cyclic peptide antibiotics with A~E components isolated from the Gram-positive spore-forming bacterium Paenibacillus polymyxa (Nang et al., 2021). However, it was soon abandoned in clinical practice due to its high renal toxicity, and has since been mainly used in veterinary drugs and feed additives (Vaara, 2019). With the emergence of carbapenem-resistant Gram-negative bacilli, polymyxins were used in clinical practice as one of the “last line of defense” against multi-resistant gram-negative bacterial infections (Bergen et al., 2012; Brown and Dawson, 2017; Tsuji et al., 2019). MRX-8 is a novel polymyxin analogue in development for the treatment of infections caused by multi-drug resistant Gram-negative pathogens, including E. coli, K. pneumoniae, P. aeruginosa and A. baumannii, and promising in vivo activity was noted for MRX-8 against those pathogens in the mouse thigh and lung model (Lepak et al., 2020). Compared with Polymyxin B, MRX-8 was developed using a “soft drug design,” which represents a new approach aimed at designing safer drugs with an increased therapeutic index by integrating metabolism and detoxification factors into the drug design process (Lepak et al., 2020; Duncan, 2022). Based on the results, apply of MRX-8 in clinical for drug-resistant pathogens in near future are expected and more preclinical evaluation of MRX-8 are needed. In this study, we evaluated the antibacterial activity of MRX-8 and comparators against clinically isolated gram-negative bacteria in China.

MICs were determined by the reference broth microdilution method according to the 31st Clinical and Laboratory Standards Institute (CLSI) (Wayne, 2021). MRX-8, polymyxin B, colistin, amikacin, ceftriaxone, ceftazidime, cefepime, ceftazidime-avibactam, cefoperazone-sulbactam, meropenem, ciprofloxacin, ampicillin, ampicillin-sulbactam and levofloxacin were tested using a dried customized commercially prepared microdilution panel (Sensititre; Thermo Fisher Scientific). And MRX-8 was obtained from the MicuRx company. E. coli ATCC 25922, P. aeruginosa ATCC 27853, Haemophilus influenzae ATCC 49766 and Haemophilus influenzae ATCC 49247 were used as the quality control strains in the antimicrobial susceptibility testing. Quality control and interpretation of the results were based on 2021 CLSI breakpoints for all the antimicrobial agents with the exception of polymyxin B and colistin. polymyxin B and colistin MICs were interpreted using the European Committee on Antimicrobial Susceptibility Testing (EUCAST) (Susceptible, MIC ≤ 2 mg/L; Resistant: MIC≥4 mg/L). MRX-8 MICs were interpreted using CLSI breakpoints for polymyxin B or colistin for comparison purpose only.

As defined by the Centers for Disease Control and Prevention (CDC), the Enterobacterales isolates resistant to at least one of the carbapenems (ertapenem, meropenem, doripenem, or imipenem) or produce a carbapenemase were carbapenem-resistant Enterobacterales (CRE) (https://www.cdc.gov/hai/organisms/cre/technical-info.html#Definition).

In Vitro Activity of MRX-8 Against Clinical Isolates

Table 1 In vitro activity of MRX-8 and other comparator agents against 122 of Escherichia coli (mg/L).

Table 2 In vitro activity of MRX-8 and other comparator agents against 138 of Klebsiella pneumoniae (mg/L).

Table 3 In vitro activity of MRX-8 and other comparator agents against 187 of other Enterobacterales (mg/L).

Table 4 In vitro activity of MRX-8 and other comparator agents against 100 of Pseudomonas aeruginosa (mg/L).

Table 5 In vitro activity of MRX-8 and other comparator agents against 113 of Acinetobacter baumannii (mg/L). 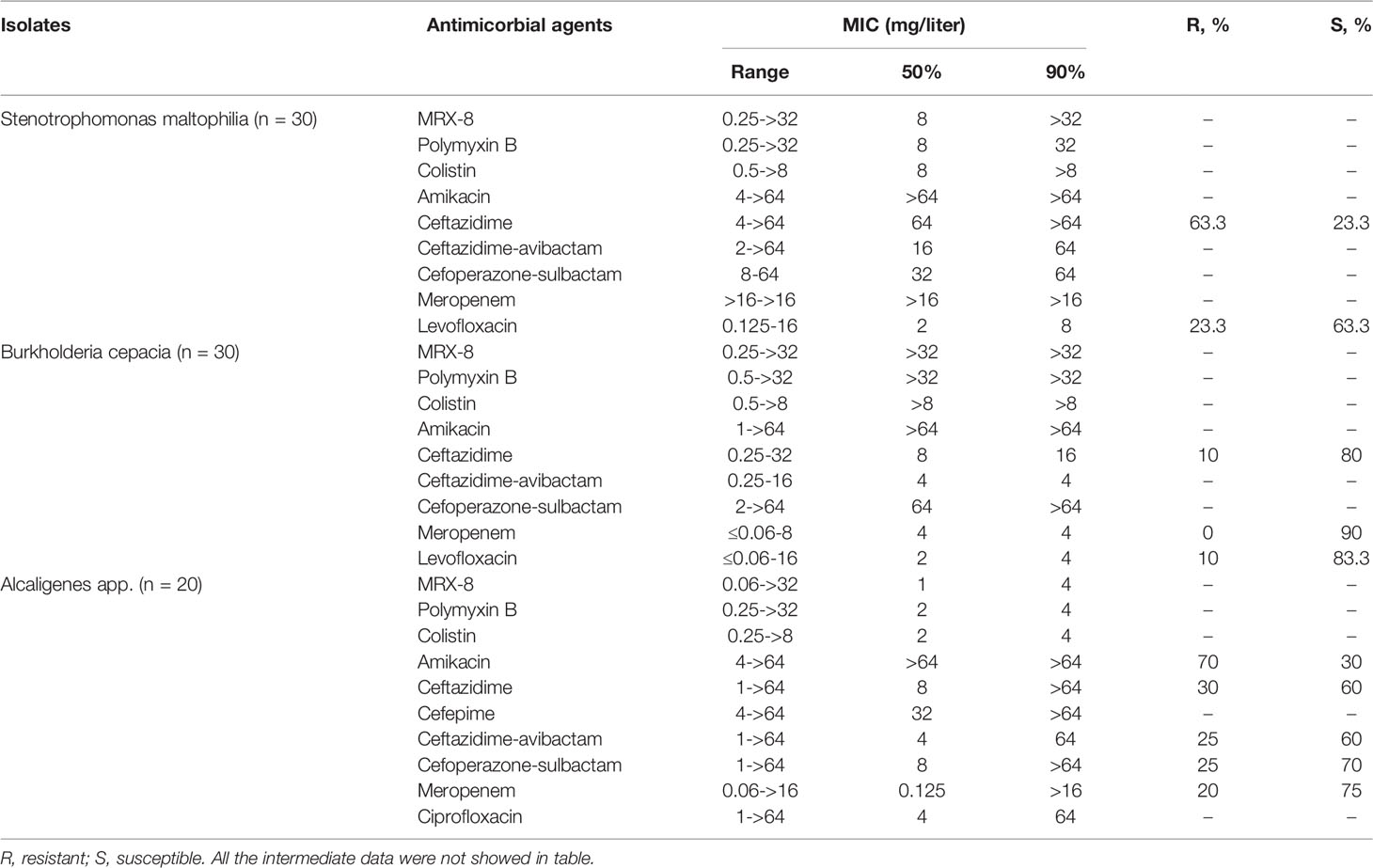 Table 6 In vitro activity of MRX-8 and other comparator agents against 80 of other non-fermentative bacteria (mg/L).

Table 7 In vitro activity of MRX-8 and other comparator agents against 25 of Haemophilus spp.(mg/L).

At present, the clinical use of polymyxins antibiotics in China are mainly two elements, polymyxin B and colistin. Polymyxins play an antibacterial role mainly by interacting with lipopolysaccharides (LPS) lipid A component of bacterial cell membrane to increase the permeability of bacterial outer membrane (Vaara, 1992). Therefore, one of the main mechanisms of bacterial resistance to polymyxins is the modification of LPS in outer membrane. Plasmid-mediated colistin resistance gene mcr-1 was first discovered in E. coli origined from animals in 2015, and this gene could transmit between different species through plasmids, mediating low levels of colistin resistance (Liu et al., 2016). Currently, mcr-1 to mcr-9 subtypes of mcr genes has been reported worldwide, and the most common one in China is mcr-1, followed by mcr-3 and mcr-8, which are mainly distributed in Enterobacterales with low detection rates (0.52% to 1.62%) (Shi et al., 2020). In 2018, Results from the China antimicrobial resistance surveillance network (CHINET) of 2018 showed that 87.9% and 93.8% of the carbapenem-resistant E. coli and K. pneumoniae were susceptible to polymyxin B, suggesting that polymyxin B still has high antibacterial activity against the multi-drug-resistant strains, especially carbapenem-resistant strains (Yang et al., 2020). As one of the optional “last line of defense” antibiotics, polymyxins are often clinically used to treat the infection of multidrug-resistant gram-negative bacteria.

MRX-8 is a new generation of polymyxins, containing a fatty acyl tail attached via an ester bond, which allows for deesterification to a less toxic metabolite (Duncan, 2022). After modification, not only the antibacterial activity is enhanced, but also the renal toxicity is significantly reduced compared to polymyxin B (Duncan, 2022). Seen from this study, the MICs of polymyxin B and colistin was 2-4 times higher than that of MRX-8 when against E. coli, Citrobacter spp. and Shigella spp., and was 1-2 times higher when against Alcaligenes app., K. pneumoniae and Haemophilus spp., and the same as that of MRX-8 when against P. aeruginosa or A. baumannii, indicating that the antibacterial activity of MRX-8 against most tested bacteria was slightly better than or similar to that of polymyxin B and colistin. We also found that when strains were resistant to polymyxin B or colistin, most of them were also resistant to MRX-8 (94.4% of E. coli and 91.6% of K. pneumoniae), so we could speculate that in vitro activity of MRX-8 is little excellent than polymyxin B or colistin. Considering the markedly reduced nephrotoxicity of MRX-8 over PMB has been confirmed in vivo, MRX-8 is potential for improved efficacy against certain Gram-infections (Duncan, 2022).

One of the limitation of this study is the number of strains of each bacteria is small. In the future, continuous in vitro antibacterial activity studies are needed to monitor the resistant change of bacteria to MRX-8.

MRX-8 was more effective against most clinically isolated Enterobacteriaceae, including carbapenem-resistant E. coli and K. pneumoniae, highlighting its potential as valuable therapeutics.

This study was granted exemption from requiring ethics approval, because none of animals or human samples were involved in this study and no potentially identifiable human images or data was presented in this manuscript.

This work was funded by the National Key Research and Development Program of China (2021YFC2701803), the China Antimicrobial Surveillance Network (Independent Medical Grants from Pfizer, 2018QD100), Shanghai MicuRx Pharmaceutical Co. Ltd and Shanghai Antimicrobial. Surveillance Network (3030231003). The funders had no role in study design, data collection and analysis, decision to publish or preparation of the manuscript.

Copyright © 2022 Wu, Yin, Zhi, Guo, Yang, Zhu and Hu. This is an open-access article distributed under the terms of the Creative Commons Attribution License (CC BY). The use, distribution or reproduction in other forums is permitted, provided the original author(s) and the copyright owner(s) are credited and that the original publication in this journal is cited, in accordance with accepted academic practice. No use, distribution or reproduction is permitted which does not comply with these terms.