Low Prevalence of Toxoplasma gondii in Dogs From Central China

Background: Toxoplasma gondii can infect almost all warm-blooded animals, including humans and dogs. Humans can become infected with T. gondii by petting dogs that have eaten or contacted infected cat feces. The aim of this study was to evaluate T. gondii infections in dogs from central China. From 2015 to 2021, a total of 536 dog samples (195 fecal, 81 hearts, and 260 serum samples) from Henan Province were collected. Heart juice or serum samples (n = 341) were tested for T. gondii antibodies using the modified agglutination test (MAT). Fresh myocardium (n = 6) and blood (n = 2) samples were bioassayed in mice.

Toxoplasmosis is caused by an obligate, intracellular, Toxoplasma gondii. T. gondii can infect almost all warm-blooded animals, including humans and dogs. Although T. gondii infection appears asymptomatic in most species, there are severe risks for immunosuppressed individuals, pregnant women, sheep, new world monkeys, and marsupials, as it may cause severe health implications to fetuses or acute infection (Dubey, 2010; Shapiro et al., 2019; Calero-Bernal and Gennari, 2019; Dubey et al., 2020).

Recently, we reviewed T. gondii infection in dogs and found that T. gondii antibodies were found in dogs worldwide (Dubey et al., 2020). Many fatal cases of canine toxoplasmosis have been reported, where ulcerative dermatitis, rear limb paralysis, and myocarditis were the main clinical presentations (Dubey, 2010; Dubey et al., 2020; Dorsch et al., 2022). Humans can become infected with T. gondii by petting dogs that have eaten or have been in contact with infected cat feces. The oocysts of T. gondii ingested by dogs may pass through the digestive tract and remain infectious (Lindsay et al., 1997). Dogs can mechanically transmit T. gondii oocysts to humans through their body surfaces, mouth, and feet (Dubey et al., 2020). Therefore, T. gondii infection in dogs can be an indicator for the level of environmental contamination for humans (Meireles et al., 2004). Additionally, because dog meat serves as food for humans in some regions (Cui and Wang, 2001; Chevalier et al., 2021; Tasiame et al., 2021), consumption of undercooked dog meat containing T. gondii cysts also poses a health risk.

China has an estimated 27 million domestic dogs, ranking third worldwide, and has an unknown number of wild dogs. The seroepidemiology of T. gondii in dogs from China is summarized in Figure 1. For China, there are few reports on clinical toxoplasmosis in dogs, no viable T. gondii strain has been isolated, and little is known about the mechanical excretion of T. gondii oocysts from dog feces. The objective of the present study was to investigate the prevalence of T. gondii infections in dogs (bodily fluids and feces) in China, and an attempt was made to isolate viable T. gondii strains. 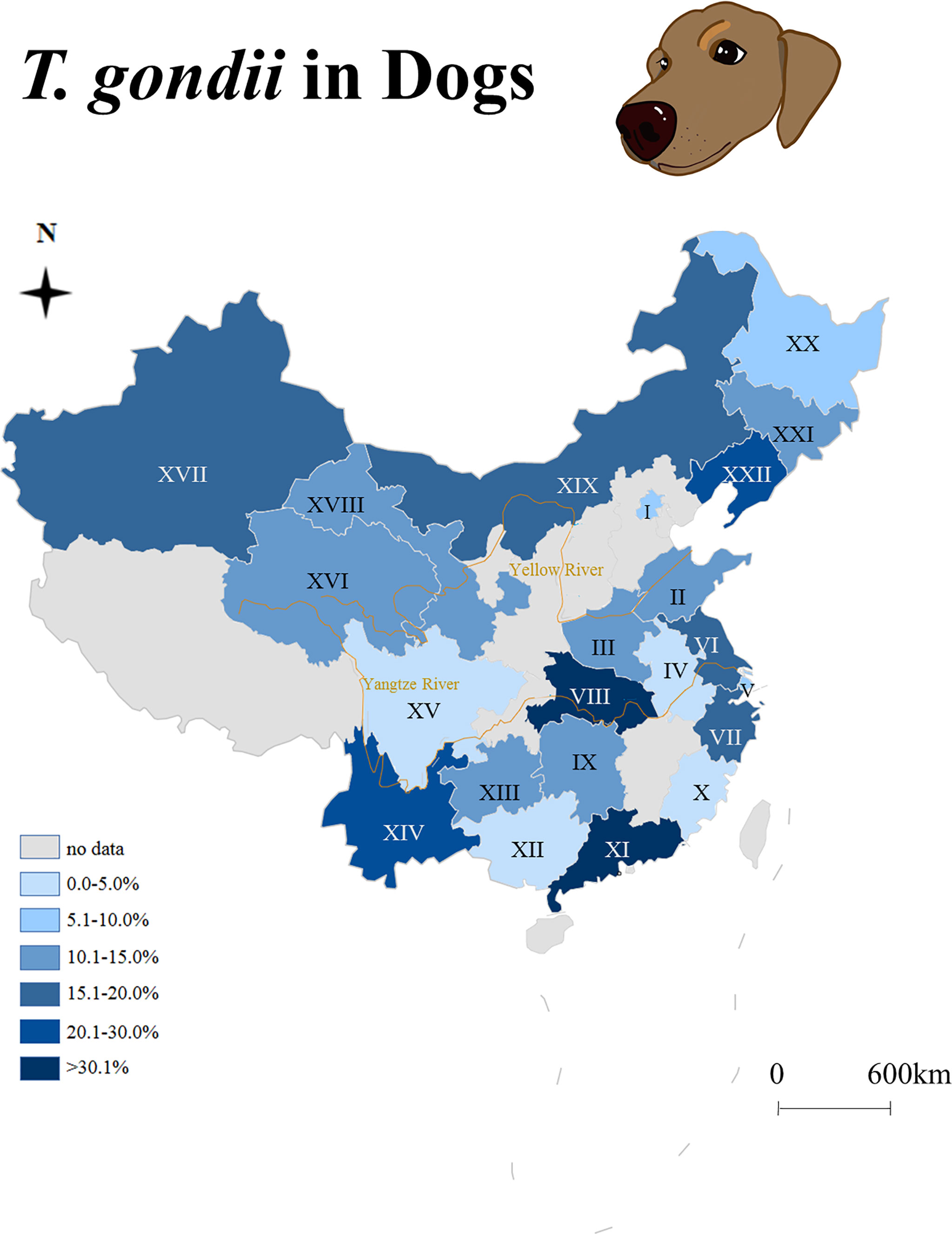 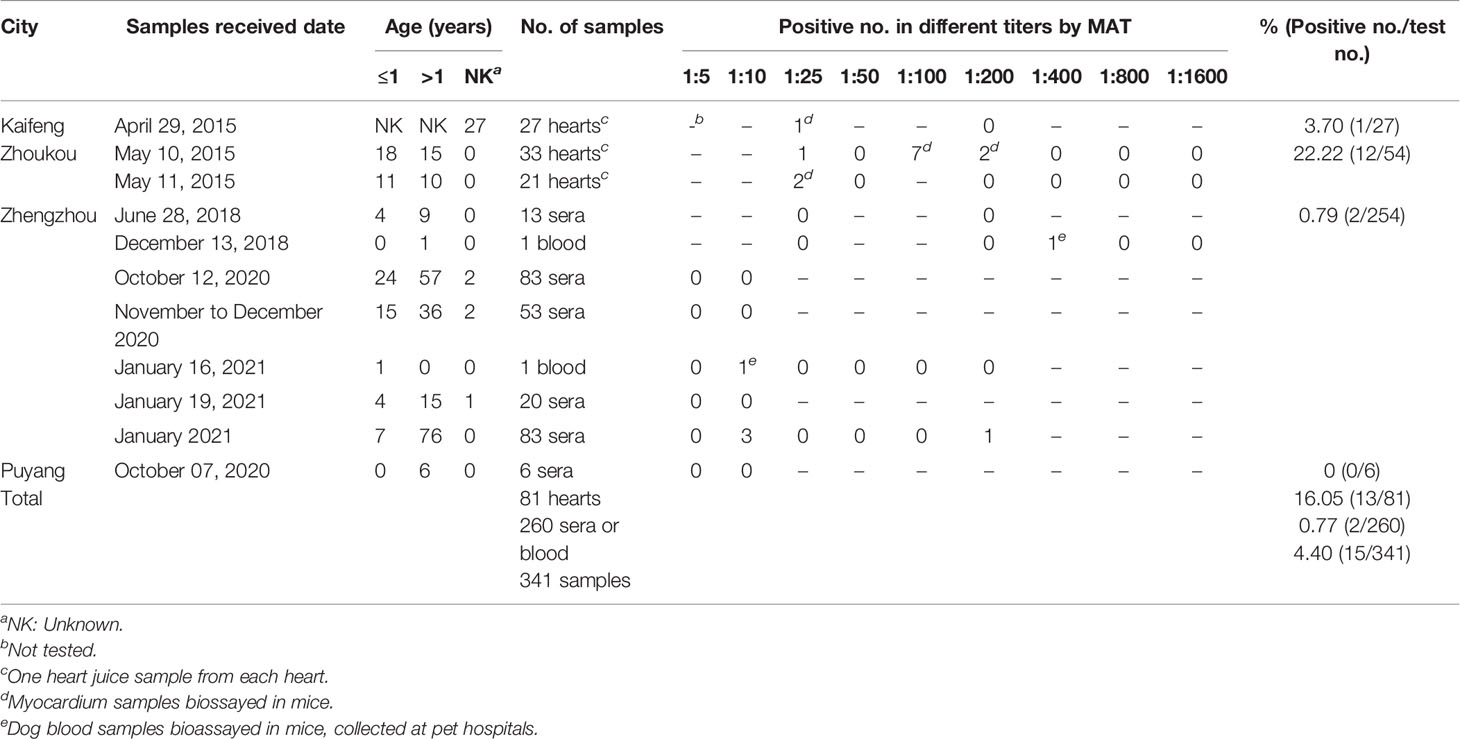 Heart juice samples from dog myocardium were centrifuged for 10 min at 2,000 rpm; serum samples were subsequently separated. Heart juice, serum, and myocardium samples were stored at 4°C and tested for T. gondii antibodies or bioassayed in mice within 2 days. Fecal samples were cultured at room temperature for 2 weeks so that oocysts could sporulated.

Clinical symptoms in mice were recorded daily. The room temperature in the facilities was 22°C–24°C, and the humidity was 60%–70%. T. gondii tachyzoites or cysts in the lungs or brains of dead or euthanized mice were examined. If cysts or tachyzoites were not found in mouse tissues, the homogenized lung, brain, and myocardium were subcutaneously subpassaged into a new group of mice. Sera were collected from surviving mice at 30 days post-inoculation (DPI). Mouse sera at dilutions of 1:25 and 1:200 were tested for T. gondii antibodies by MAT.

Oocysts were purified from dog fecal samples by the conventional sucrose flotation method at room temperature (Dubey, 2010). Floated materials were transferred to slides and checked by light microscopy. Parasite oocysts and eggs were differentiated based on their morphological characteristics. Oocysts were stored at −20°C in a refrigerator for further analysis.

In this study, six fresh myocardium (seropositive for T. gondii) and two blood (one at 1:400, one at 1:10) samples were bioassayed in mice (Table 4). Unfortunately, the viable T. gondii strain was not successfully isolated from any tissues or blood samples. After mice were bioassayed, only one group of mouse sera (dog blood: ID# December 13, 2018; two positive mice of three inoculated mice) showed seroconversion for T. gondii at 39 DPI. However, after subpassage, none of the mice were positive for T. gondii infection by serology or etiology. None of the myocardium (n = 81), myocardium digestion fluid (n = 6), or blood (n = 2) samples contained T. gondii DNA.

Table 4 Isolation of T. gondii from dogs by bioassay in mice.

Dogs are susceptible to T. gondii with a seroprevalence of 1.9% to 97.0% in the world (Dubey et al., 2020). Dogs have a keen sense of smell and the behavior of rolling in feces, thereby increasing their exposure to T. gondii (Frenkel et al., 2003; Dubey et al., 2020). Canine toxoplasmosis can also be caused by ingesting oocysts or meat containing T. gondii cysts (Yan et al., 2012; Calero-Bernal and Gennari, 2019). A previous epidemiological study detected a uniform prevalence of T. gondii between humans and dogs, which may be because they lived in the same environment, indicating that dogs may be a good sentinel species of T. gondii exposure for humans (Tenter et al., 2000; Meireles et al., 2004).

In the present study, geographic location was a risk factor associated with T. gondii seroprevalence in dogs. Compared to other regions, the T. gondii prevalence in dogs from Zhoukou was significantly higher. This may be due to the following: (1) Henan Province is located downstream of the Yellow River. Zhoukou is closer to the Yellow River than other cities, and T. gondii oocysts may be transported via freshwater, thereby posing a threat to animals residing close to the river. (2) Samples from Zhoukou were collected in 2015, which is relatively earlier than in cities of Zhengzhou and Puyang. Regarding T. gondii infection in this study, gender and age were not risk factors for dogs, and the lack of relationship with gender was in agreement with the findings of other studies (Lopes et al., 2011; Yang et al., 2013; Nguyen et al., 2020). However, a previous study found that seroprevalence in dogs increased with age (Dubey et al., 2020), which may be related to the low seroprevalence of T. gondii in dogs or small sample size in this study.

Environmental pollution due to dog feces is a public health concern and constitutes a health hazard to humans (Ainmode et al., 2016). When dogs ingest cat feces containing T. gondii oocysts, oocysts remain viable after passing through the digestive tract (Lindsay et al., 1997). Here, T. gondii DNA was detected in the feces of 8/195 dogs sampled from Henan Province. The seroprevalence levels of T. gondii in domestic cats in Henan Province were 50% (21/42) (Yang et al., 2015), 21% (178/843) (Wang et al., 2017), and 7% (2/28) (Yang et al., 2017). These results indicated that the environment may be polluted by T. gondii oocysts. Humid tropical climates are conducive for maintaining oocysts in the soil and water, thereby contributing to its widespread dissemination (Afonso et al., 2006). T. gondii infection in dog feces is rarely reported on a global scale. In a previous study, T. gondii DNA was detected in the feces of 4/120 dogs sampled from the United States (Munoz and Mayer, 2016). T. gondii isolates (TG-dgGER1, TG-dgGER2) were successfully isolated from 2/24,089 fecal samples (Schares et al., 2005).

Compared to older dogs, there was a significantly higher prevalence of T. gondii DNA in feces from ≤1-year-old dogs. This may be explained by the fact that puppies are more active than adults. Dogs from pet shops had a higher prevalence of T. gondii DNA in their feces than those from shelters, hospitals, or farms. Pet shops often sell many kinds of animals, including cats, dogs, birds, and fish, indicating that the pet shop environment may increase the exposure of dogs to T. gondii oocysts. Gender, breed, and source area were not risk factors associated with T. gondii-positive rates in dog fecal samples based on the T. gondii DNA results in this study. In order to investigate T. gondii infection in dogs, excluding serological tests, fecal samples may be an excellent option for etiology detection in the future. Moreover, feces are easier to obtain, especially for vigilant and fierce stray dogs or wild canines. Bioassays of dog feces via cats or mice could further verify T. gondii infectivity.

In our previous study, T. gondii was not isolated from the myocardium of 14 seropositive dogs (MAT ≥ 10) sampled from 2013 to 2014 (Yang et al., 2014). Unfortunately, in this study, T. gondii was not isolated from dog myocardium (n = 6, MAT ≥ 25) or blood (n = 2, MAT ≥ 10) samples. This may be due to the following: (1) the low virulence of T. gondii in dogs or (2) the low density of parasite loading in dog tissues. The fact that no T. gondii DNA was found in the myocardium (n = 81), myocardium digestion fluids (n = 6), or blood (n = 2) also confirms this hypothesis. Although serological results indicated contact of dogs with T. gondii, tissues were negative for the presence of the parasite. T. gondii infection might occur when consuming dog meat. The lack of detection of the parasite by molecular assays or biological assays in chronic T. gondii infection might be due to the limited sample size analyzed (0.5 g tissue or 50 g tissue), the uneven distribution of tissue cysts, and perhaps the low number of T. gondii tissue cysts in the tissues.

This is the first survey of T. gondii infection from dog fecal samples in China. The results showed that 4.40% (15/341) of the dogs were seropositive by MAT and 4.10% (8/195) dog feces contained T. gondii DNA. Dogs were exposed to T. gondii; they could act as mechanical transmitters of T. gondii.

The animal study was reviewed and approved by Beijing Association for Science and Technology (SYXK [Beijing] 2007-0023).

This study was financed by the Natural Science Foundation of Henan Province, China (202300410214), and the Key Research Projects of Henan Higher Education Institutions (21A230009).

We thank Lina Qu (Henan Agricultural University, Zhengzhou, China) for performing some of the laboratory detections.

Copyright © 2022 Zhu, Yang, Xin, Huang, Jiang and Yang. This is an open-access article distributed under the terms of the Creative Commons Attribution License (CC BY). The use, distribution or reproduction in other forums is permitted, provided the original author(s) and the copyright owner(s) are credited and that the original publication in this journal is cited, in accordance with accepted academic practice. No use, distribution or reproduction is permitted which does not comply with these terms.

Cryptosporidium, Giardia, Cyclospora, and Toxoplasma - Insights into Their Transmission