Fur animals including minks, raccoon dogs and foxes are wild animals raised as new farm animals for their fur. China is the largest market for fur consumption and one of world’s leading suppliers of fur (Fenollar et al., 2021). In 2021, fur animal farming industry in China is worth $61 billion, therefore is a notable contributor to local growth and employment (Williams, 2021). Currently there are nearly 6 million employees in the fur industry of China. Overall, 95% of fur farms are in five provinces of Shandong (greatest concentration), Hebei, Liaoning, Heilongjiang, and Jilin (Gong et al., 2020). On fur animal farms, the prevalence of zoonotic pathogens could increase as a result of intensive animal farming and poor sanitary conditions, leading to concerns for both animal health and public health (Guo et al., 2021).

In this study, we examined the occurrence and genetic identity of Cryptosporidium spp. in minks, raccoon dogs and foxes on two farms in Shandong Province, which has the most concentrated fur farming industry in China. The genetic diversity of C. canis, C. meleagridis and mink genotype in these animals and their zoonotic potential was also assessed.

From June to October in 2019, a total of 1,211 fecal samples were collected from reared fur animals on two farms in Shandong Province, eastern China, including 602 from minks (Neovison vison) and 310 from raccoon dogs (Nyctereutes procyonoides) on farm 1, and 299 from foxes (Vulpes lagopus) on farm 2. All the animals sampled were kept in cages with some interactions between neighboring cages. Fur animals of < 6 months in age were kept in groups of 2-3 animals per cage, while animals of > 6 months were kept individually. Fresh fecal droppings from these animals were collected on the ground under each cage, with one fecal sample being collected from each cage. The animals were divided into three age groups: 1-2 months (n = 512); 5-6 months (n = 286); and > 12 months (n = 413). As newborn foxes were kept together with their mothers, samples from foxes of 1-2 months were not collected in this study. Fecal samples were stored in 2.5% potassium dichromate at 4°C before DNA extraction.

Prior to DNA extraction, approximately 300 mg fecal samples were washed twice with distilled water to remove potassium dichromate by centrifugation at 2,000 × g for 10 min. Genomic DNA was extracted from the sediment using the FastDNA Spin Kit for Soil (MP Biomedicals, Solon, OH, USA) as described (Jiang et al., 2005). The extracted DNA was stored at -20°C until being used in PCR analyses.

Genotyping and subtyping of Cryptosporidium spp.

Cryptosporidium spp. were detected and genotyped by nested PCR and sequence analyses of the small subunit (SSU) rRNA gene (Xiao et al., 1999). The C. canis, C. meleagridis and Cryptosporidium mink genotype identified were further subtyped by nested PCR and sequence analyses of the 60 kDa glycoprotein (gp60) gene as previously described (Glaberman et al., 2001; Alves et al., 2003; Jiang et al., 2021). As all the C. canis-positive samples from foxes in this study could not be subtyped using the gp60 primers previously designed (Jiang et al., 2021), we have redesigned nested PCR primers based on the gp60 gene of C. canis in foxes. The primers used in primary and secondary PCR were Canis-Fox-gp60-F1 (5'-TTCACAGTCTACTTTGATGG-3') and Canis-Fox-gp60-R1 (5'-GTACTCGGAAGCGGTGTA-3'), and Canis-Fox-gp60-F2 (5'-GACCCGGACGTTACATTTGATGG-3') and Canis-Fox-gp60-R2 (5'-TCAGTTAGATATCACCCATTAA-3'), respectively. The PCR condition was the same as previously described with an annealing temperature of 52°C being used in both primary and secondary PCR (Jiang et al., 2021). Two replicates were used in PCR analysis of each target for each sample. Genomic DNA of C. parvum from cattle and reagent-grade water were used as the positive and negative control, respectively.

Differences in the prevalence of Cryptosporidium spp. among age groups of fur animals were compared using the Chi-square test implemented in SPSS 20.0 (IBM Corp., Armonk, NY, USA). Differences were considered significant at P < 0.05. 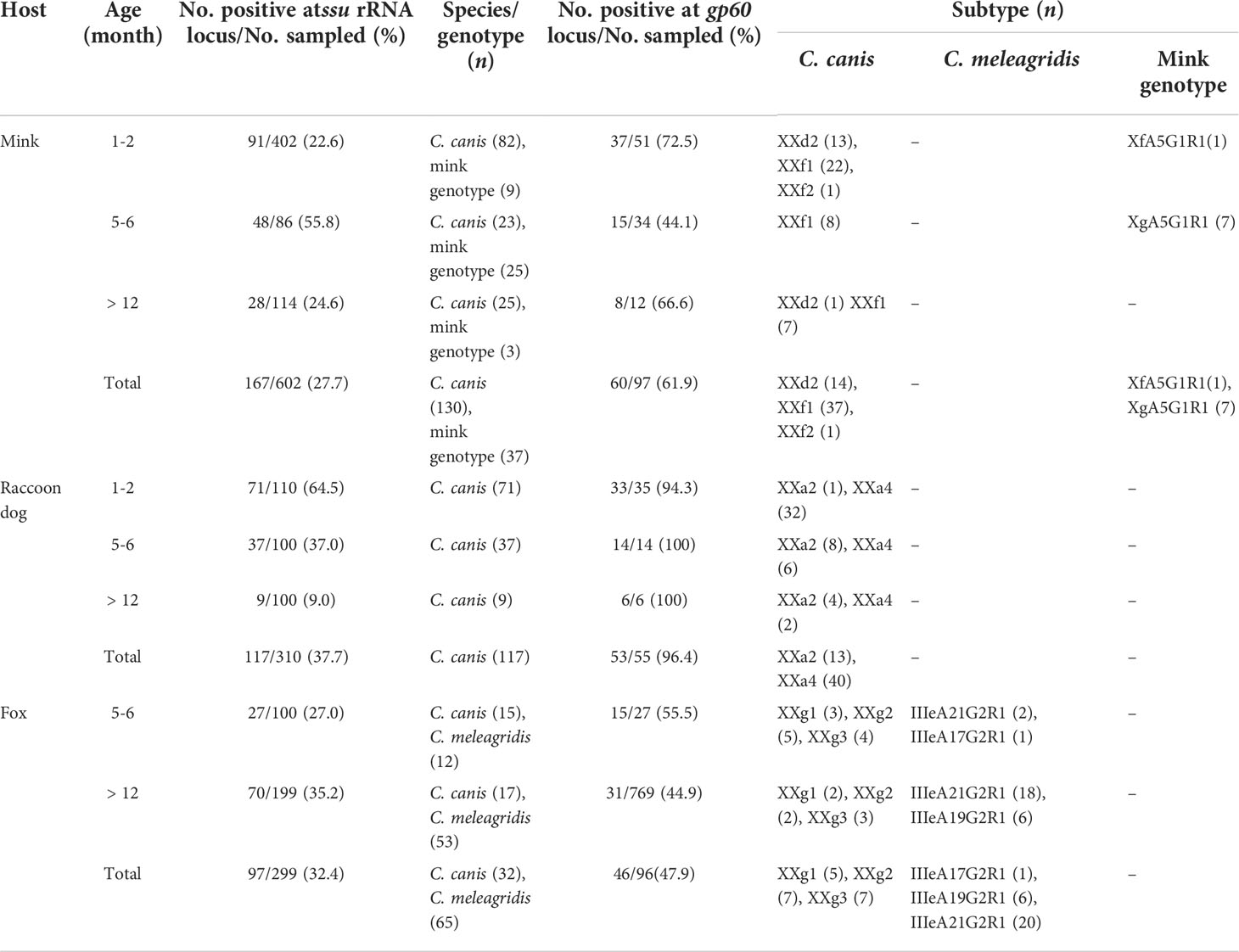 Table 1 Occurrence of Cryptosporidium species/genotypes and subtypes in minks, raccoon dogs and foxes on two farms in Shandong, China. 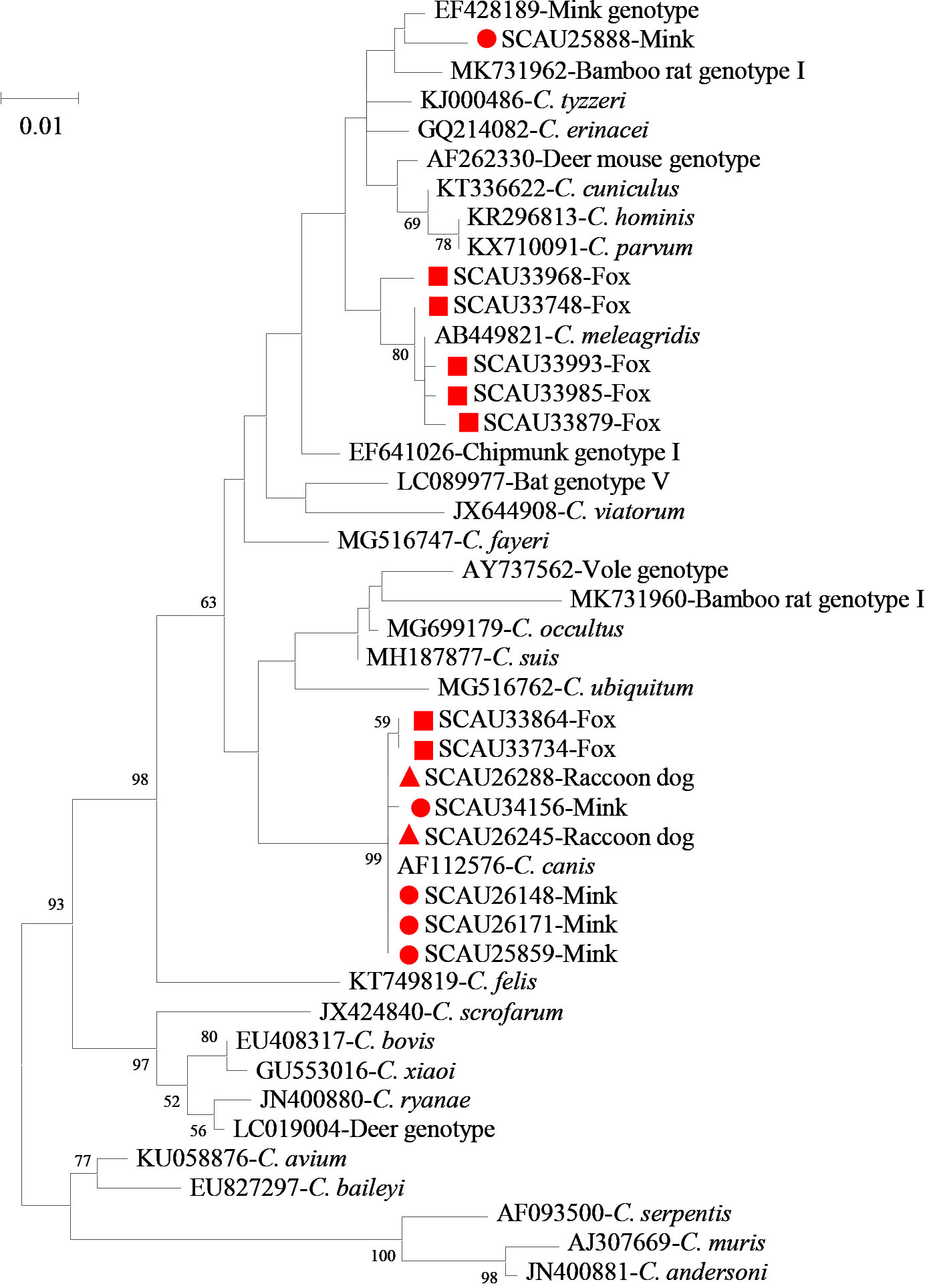 Figure 1 Phylogeny of Cryptosporidium spp. based on the maximum likelihood analysis of the partial SSU rRNA gene using the general time-reversible model for the calculations of substitution rates. Bootstrap values greater than 50% from 1,000 replicates are displayed. Samples detected in minks, raccoon dogs and foxes from this study are indicated with red circles, triangles, and squares, respectively.

A total of 148 C. canis samples were randomly selected from each age group of each host species for further subtyping at the gp60 locus, with 124 samples (83.8%) being successfully amplified and sequenced. Among them, 52/61 samples (85.2%) from minks, 53/55 samples (96.4%) from raccoon dogs, and 19/32 (59.4%) samples from foxes were successfully subtyped. In these C. canis samples, two known subtype families of XXa and XXd and two new subtype families of XXf and XXg were identified. XXf had 92.6-98.5% nucleotide sequence identity to known subtype families XXa-XXe, while XXg had 66.8-69.8% nucleotide sequence identity to subtype families XXa-XXf. In phylogenetic analysis, XXf clustered with XXb, whereas XXg was placed outside the clade containing XXa-XXf (Figure 2). 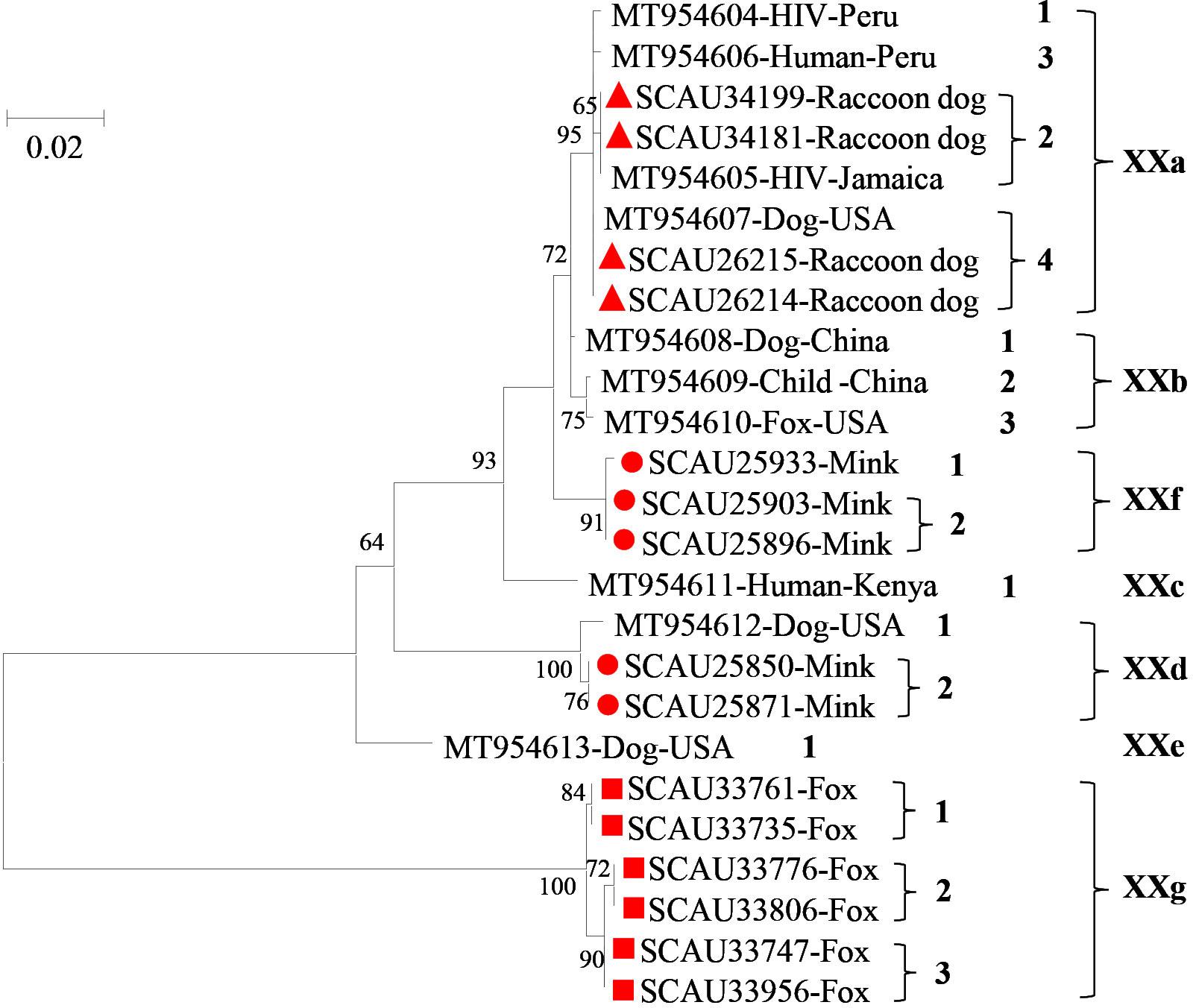 Figure 2 Phylogenetic relationship among seven Cryptosporidium canis subtype families (XXa-XXg) based on the maximum likelihood analysis of the partial gp60 gene using the general time-reversible model for the calculations of substitution rates. Bootstrap values greater than 50% from 1,000 replicates are displayed. Samples detected in minks, raccoon dogs and foxes from this study are indicated with red circles, triangles, and squares, respectively.

Among the 52 C. canis samples from minks, two subtype families of XXd and XXf were identified, including three subtypes XXd2 (n = 14), XXf1 (n = 37) and XXf2 (n = 1) (Table 1). Nucleotide sequence of the new subtype XXd2 had 18 nucleotide insertions and 4 SNPs compared with the reference sequence MT954612 of subtype XXd1. In contrast, there was only 1 SNP between the nucleotide sequences of XXf1 and XXf2.

The 53 C. canis isolates from raccoon dogs all belonged to the XXa subtype family, including two known subtypes XXa2 (n = 13) and XXa4 (n = 40) (Table 1). The nucleotide sequences of XXa2 and XXa4 were identical to the reference sequences MT954605 and MT954607, respectively. 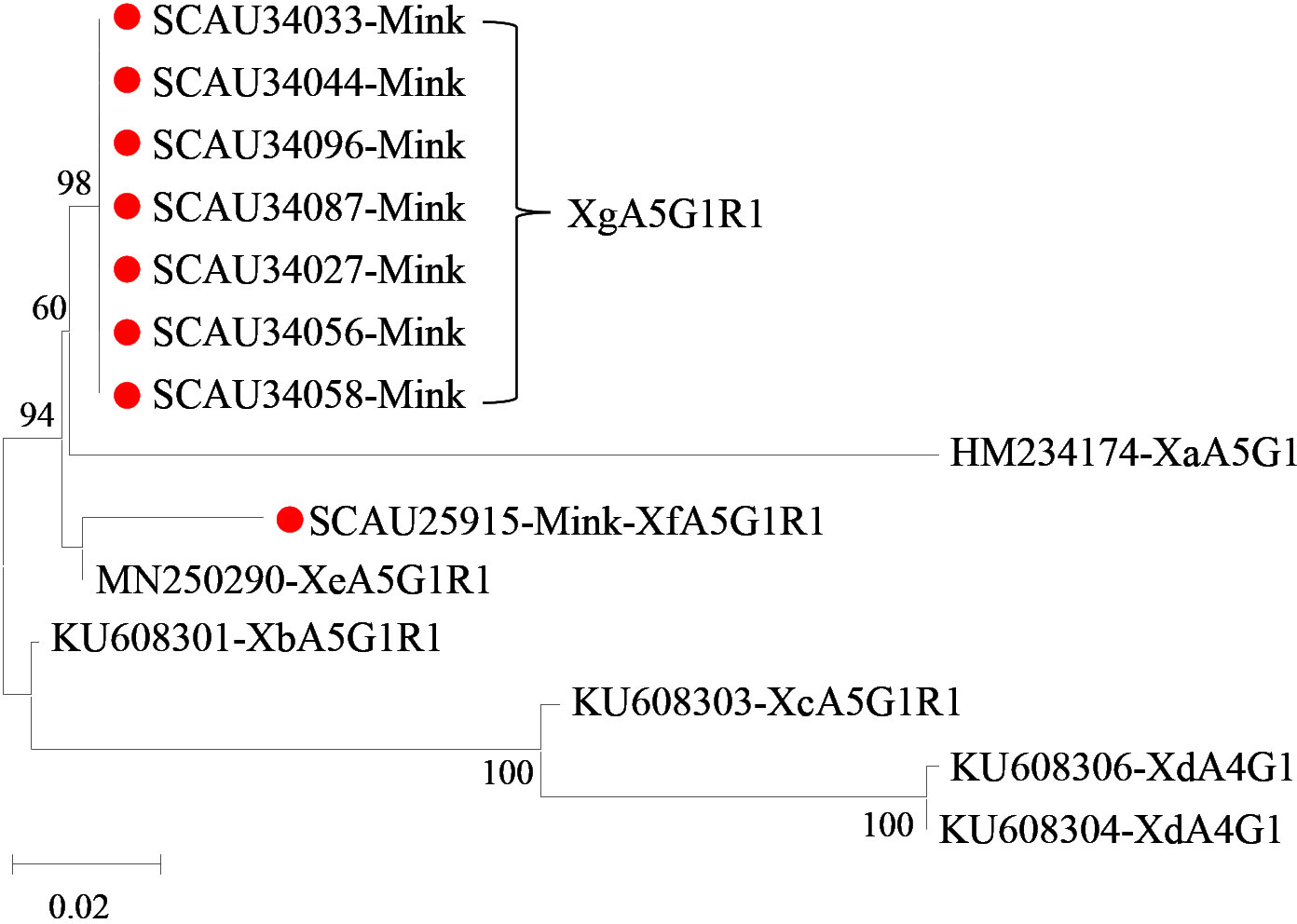 Figure 3 Phylogenetic relationship among seven subtype families (Xa-Xg) of Cryptosporidium mink genotype based on the maximum likelihood analysis of the partial gp60 gene using the general time-reversible model for the calculations of substitution rates. Bootstrap values greater than 50% from 1,000 replicates are displayed. Samples detected in minks from this study are indicated with red circles.

The dominant Cryptosporidium species and genotypes appears to be different among fur animals. In this study, C. canis was the dominant species in minks and raccoon dogs. This is similar to observations of most studies in China, except for two studies with mink genotype being dominant in minks (Wang et al., 2008; Qian et al., 2020). However, C. meleagridis was found to be dominant in foxes here, which is in contrast with previous reports showing that C. canis is more prevalent in farmed foxes (Zhang et al., 2016b; Yang et al., 2018). C. canis and C. meleagridis have been frequently found in humans in developing countries and are among the five most common human-pathogenic species of Cryptosporidium (Yang et al., 2021). Thus, practitioners in the fur industry should be educated on the zoonotic potential of the two Cryptosporidium species and their transmission routes.

By using the newly developed subtyping tool (Jiang et al., 2021), both high genetic diversity and host adaptation were observed within C. canis at the gp60 locus in the present study. Four C. canis subtype families were identified in these animals. Among them, XXa was only detected in raccoon dogs, XXd and XXf only in minks, and XXg only in foxes, indicating the existence of host adaptation in C. canis among fur animal species. Similarly, apparent host-adapted gp60 subtype families are present in some other human-pathogenic Cryptosporidium spp. such as C. parvum, C. hominis and C. ubiquitum (Feng et al., 2018). Nevertheless, the two subtypes XXa2 and XXa4 identified in raccoon dogs here have been reported in humans in the United States, Peru, Ethiopia, and Jamaica (Jiang et al., 2021). This indicates that C. canis in farmed raccoon dogs could have zoonotic potential.

C. canis from foxes appears to be genetically different from those in other hosts such as humans, dogs, minks and raccoon dogs. Our data indicate that the XXg subtype family identified in foxes is genetically distant from other subtype families in phylogenetic analysis of gp60 sequences. Nucleotide sequences of the partial gp60 gene obtained from XXg showed low identity to that of XXa-XXf, with substantial nucleotide differences in the 5′ region of the obtained sequence. This could be responsible for the failure of previously designed primers to amplify the gp60 gene of C. canis from foxes (Jiang et al., 2021). In addition, the result supports the existence of genetic divergences among C. canis isolates from different hosts. The genetic differentiation at the subtype level might be the reflection of various transmission patterns and intensities of C. canis.

C. meleagridis, the dominant species found in foxes in this study, is a known zoonotic pathogen. The subtypes IIIeA19G2R1 and IIIeA17G2R1 identified in foxes here have been detected in chickens and birds in China (Liao et al., 2018; Liao et al., 2021; Lin et al., 2022) and humans in China, Uzbekistan and India (Stensvold et al., 2014; Lebbad et al., 2021). However, the dominant C. meleagridis subtype in foxes, IIIeA21G2R1, has been only reported previously in one patient in Indonesia (Lebbad et al., 2021). Therefore, despite the possible mechanic passages of C. meleagridis in foxes through food sources from chickens, farmed foxes could play a potential role in the transmission of this zoonotic pathogen.

In conclusion, results of this study indicate a common occurrence of Cryptosporidium spp. in minks, raccoon dogs and foxes on two farms in Shandong, China, and extend our knowledge on the genetic diversity and transmission of Cryptosporidium spp. in farmed exotic animals. Host adaptation was observed in C. canis from different fur animals. The presence of zoonotic C. canis subtypes in raccoon dogs and C. meleagridis subtypes in foxes suggests that these fur animals might be potential reservoirs for human-pathogenic Cryptosporidium spp. With the increased intensity in fur animal farming, attentions should be paid to the potential public health implications of contacts with fur animals and environmental contamination from fur animal farms.

The animal study was reviewed and approved by Ethics Committee of the South China Agricultural University.

YF and NL conceived and designed the experiments. WWa, YW, SC, WWu, and WZ performed the experiments and analyzed the data. YG and LX provided technical assistance. WWa, YW, YF, and NL wrote the manuscript. All authors contributed to the article and approved the submitted version.

Copyright © 2022 Wang, Wei, Cao, Wu, Zhao, Guo, Xiao, Feng and Li. This is an open-access article distributed under the terms of the Creative Commons Attribution License (CC BY). The use, distribution or reproduction in other forums is permitted, provided the original author(s) and the copyright owner(s) are credited and that the original publication in this journal is cited, in accordance with accepted academic practice. No use, distribution or reproduction is permitted which does not comply with these terms.

Cryptosporidium, Giardia, Cyclospora, and Toxoplasma - Insights into Their Transmission