Background: The gut microbiota is recognized as a major modulator of metabolic disorders such as type 2 diabetes. Dapagliflozin, sodium glucose cotransporter 2 inhibitors (SGLT2i), enhances renal glucose excretion, and lowers blood glucose levels. The study aimed to determine the effects of dapagliflozin on fecal microbiota in a type 2 diabetic rat model.

Results: Dapagliflozin significantly decreased fasting and postprandial blood glucose levels as metformin in type 2 diabetic rats (P < 0.001). Enterotype was composed of Ruminococcaceae after treatment of dapagliflozin, whereas Ruminococcaceae and Muribaculaceae were the main enterotypes following metformin treatment. Dapagliflozin did not increase the abundance of beneficial bacteria including Lactobacillaceae and Bifidobacteriaceae. However, these were increased in the metformin group. It is surprising to find that Proteobacteria (especially Desulfovibrionaceae) were enriched in the dapagliflozin group.

Conclusion: Dapagliflozin and metformin exerted complementary effects on the main beneficial bacteria. A combination of these two drugs might be beneficial to improve the structure of fecal microbiota in the treatment of type 2 diabetes.

Type 2 diabetes (T2D) affects nearly 373.5 million individuals worldwide. An increasing number of studies have connected the gut microbiome with metabolic diseases such as diabetes and obesity (1). It has been reported that there was a decreased amount of beneficial bacteria in patients with type 2 diabetes (2). Fecal microbiota transplantation holds potential as a promising option in the treatment of diabetes (3).

The composition and richness of intestinal flora are unique and highly variable. It can be modulated by diet, host health, age, ethnicity, genetics, and antidiabetic medication (4). Metformin is a first-line medication in the treatment of type 2 diabetes, as it increases the abundance of beneficial bacteria (4, 5), and is associated with higher levels of short-chain fatty acids (SCFAs: acetate, propionate, and butyrate) (6). SCFAs conferred beneficial metabolic effects, including improving body weight and glycemic management (7). Treatment of metformin could restore sodium glucose cotransporter 1 (SGLT1) expression and glucose sensing to alter the upper small intestinal microbiota (8).

Sodium glucose cotransporter 2 (SGLT2) inhibitors are used to achieve the glucose-lowering effect by increasing urinary glucose excretion (9). SGLT2 is mainly expressed in the proximal tubule of the kidney, while SGLT1 is highly expressed in the gut (9). SGLT2 inhibitors could act on SGLT1 to reduce intestinal glucose uptake (10). SGLT2 inhibitors decreased the glucose excursion and increased glucagon-like peptide-1 (GLP-1) and peptide YY secretion following carbohydrates (CHO) ingestion (11). The latter may augment glucose exposure of the colonic microbiota and formation of metabolites (11). It has been shown that canagliflozin altered the intestinal microbiota composition in mice with chronic kidney disease (12). The effects of dapagliflozin on fecal microbiota remain controversial. A recent study demonstrated that dapagliflozin altered the fecal microbiota in diabetic mice (13). However, another human study reported that dapagliflozin treatment had no effects on fecal microbiota. It should be noted that it was a combinative effect of metformin and dapagliflozin. Furthermore, there was no placebo in the study (14). Therefore, we aimed to explore the effects of dapagliflozin on fecal microbiota in a type 2 diabetic rat model.

Four-week-old male Sprague Dawley (SD) rats weighing 200–250 g were purchased from Shanghai SLAC Laboratory Animal (Shanghai, China, SCXK2017-0005, SYXK2017-0008). All the SD rats were housed in a controlled environment with a temperature of (20–25°C) and humidity of (40–60%) and allowed free access to water and food. Animal handling and experimental procedures were consistent with the regulations of the Shanghai Government and the Principles of Laboratory Animal Care, published by the US National Institutes of Health (publication no.85-23, revised 1996).

The detailed animal ethics including the animal tests and its handing procedures were approved by the institutional animal care and use committee of SLAC.

Rats were fed with a high-fat diet for 8 weeks, followed by a single dose of injection of STZ (30 mg/kg, ip). The high-fat diet (HFD) contained 20% protein, 20% carbohydrate, and 60% fat. The blood glucose was detected about 3–7 days after STZ administration. Rats were considered the model of type 2 diabetes mellitus when they met the following criteria (the highest random blood glucose concentrations were higher than 16.7 mmol/L, and the 2 h postprandial glucose concentrations were higher than 11.1 mmol/L). They were randomly divided into three groups (n = 8): control, metformin, and dapagliflozin. All the rats received daily gastric gavage with 2 ml saline (0.9%), or metformin (215.15 mg/kg/day, Sino-American Shanghai Squibb Pharmaceuticals, H20023370) or dapagliflozin (1 mg/kg/day, AstraZeneca, H20170117) for 4 weeks. The formula used for the dosage of dapagliflozin and metformin was: drat=dhuman*0.71/0.11 (15).

After 4 weeks of dosage, overnight-fasted rats were given 50% glucose at a dose of 2 g/kg by intragastric administration. Blood samples were collected from the tip of the rats' tails to test glucose levels at 0, 30, 60, 120, and 180 min by using a glucose meter (Accu-Chek, Roche, Swiss). The samples were centrifuged for 10 min at 3,000 rpm (4°C) and plasma was used for insulin measurement.

Indexes of alpha diversity (Sobs, Shannon, Ace, and Chao1) were analyzed by the Kruskal-Wallis test. Beta diversity was calculated by the pMANOVA analysis based on Bray Curtis distances. Kruskal-Wallis sum rank test was used to detect the differences of the relative abundance of bacteria between the groups, including the LEfSe algorithm. Only functional categories reaching a log LDA significant threshold value of >2.0 were shown. Spearman's correlations were calculated between the abundance of bacterial families and blood glucose levels during IGGTT. P < 0.05 was considered statistically significant.

The shannon index of dapagliflozin treatment was higher than that of metformin (P = 0.039) (Figure 1B). No statistical difference was found in the indexes indicating richness, including Sobs, Ace, and Chao1 (Figures 1A,C,D). The pMANOVA analysis, which was based on Bray Curtis distances, revealed significant alterations of the microbiota communities between metformin, dapagliflozin, and control rats (P = 0.001) (Figure 2A). 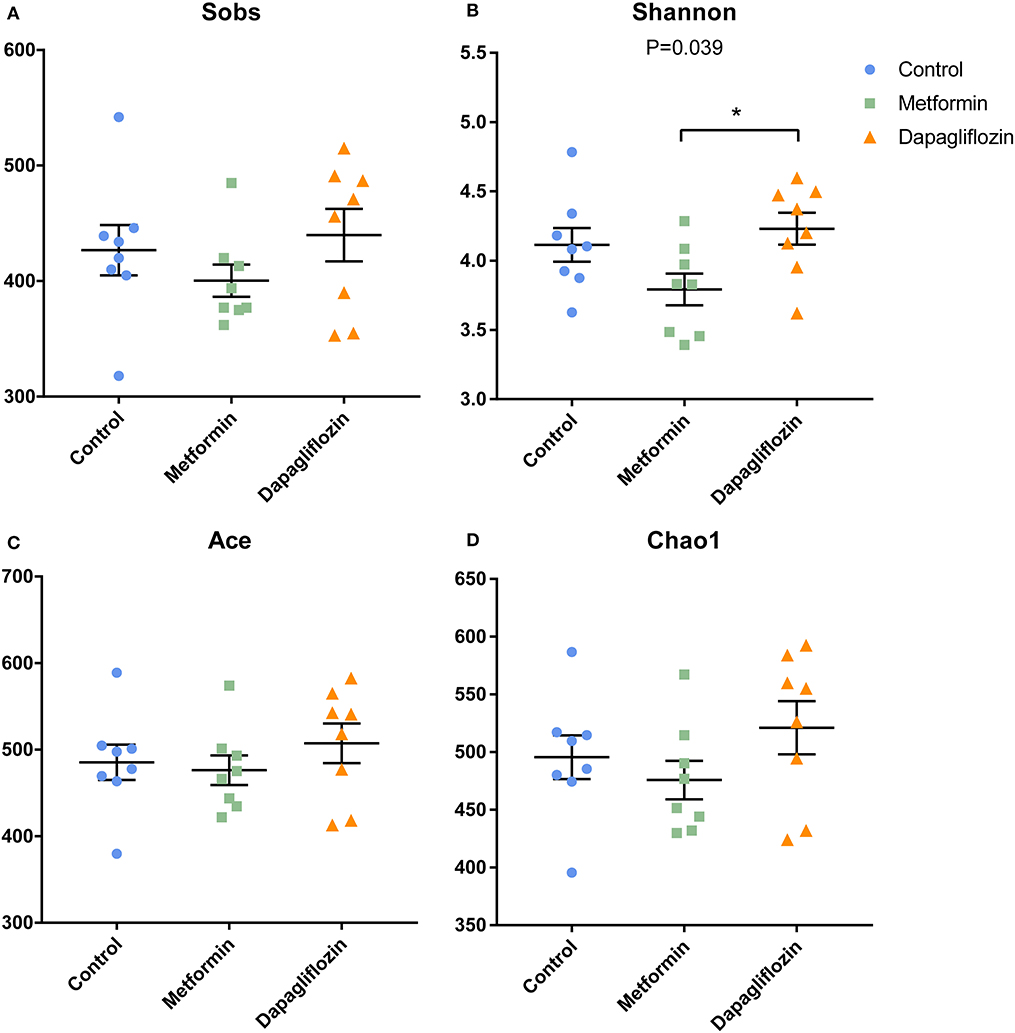 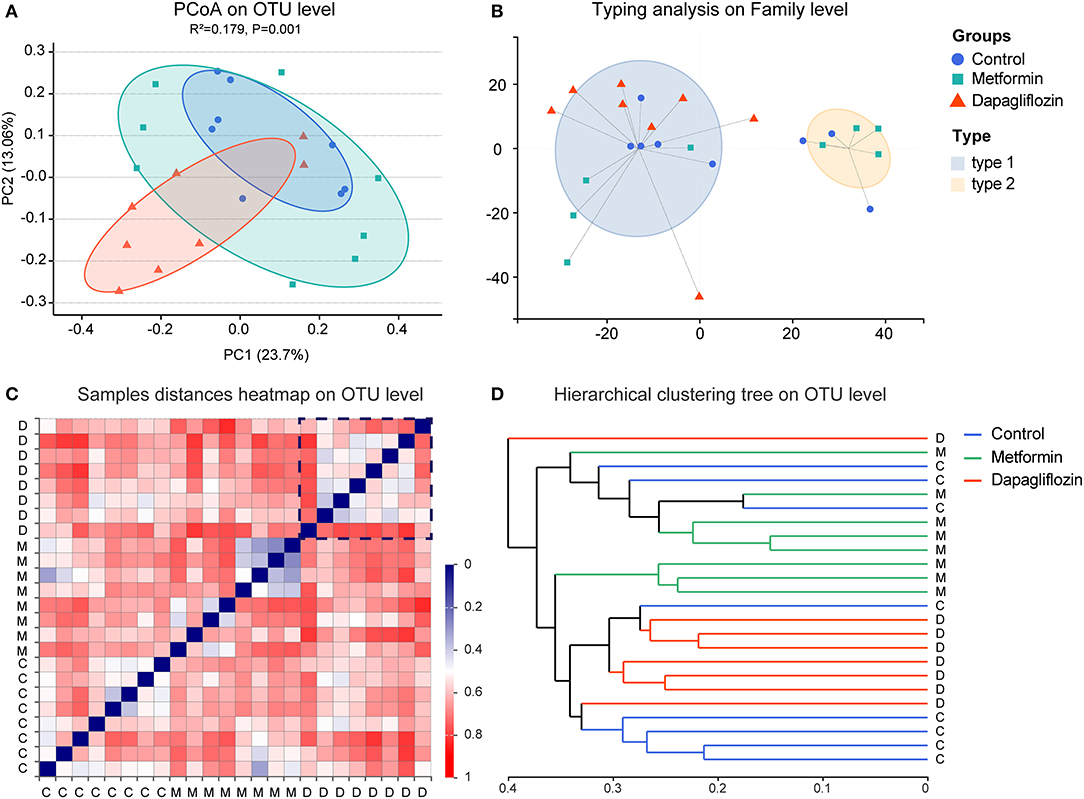 The Composition of Fecal Microbiota 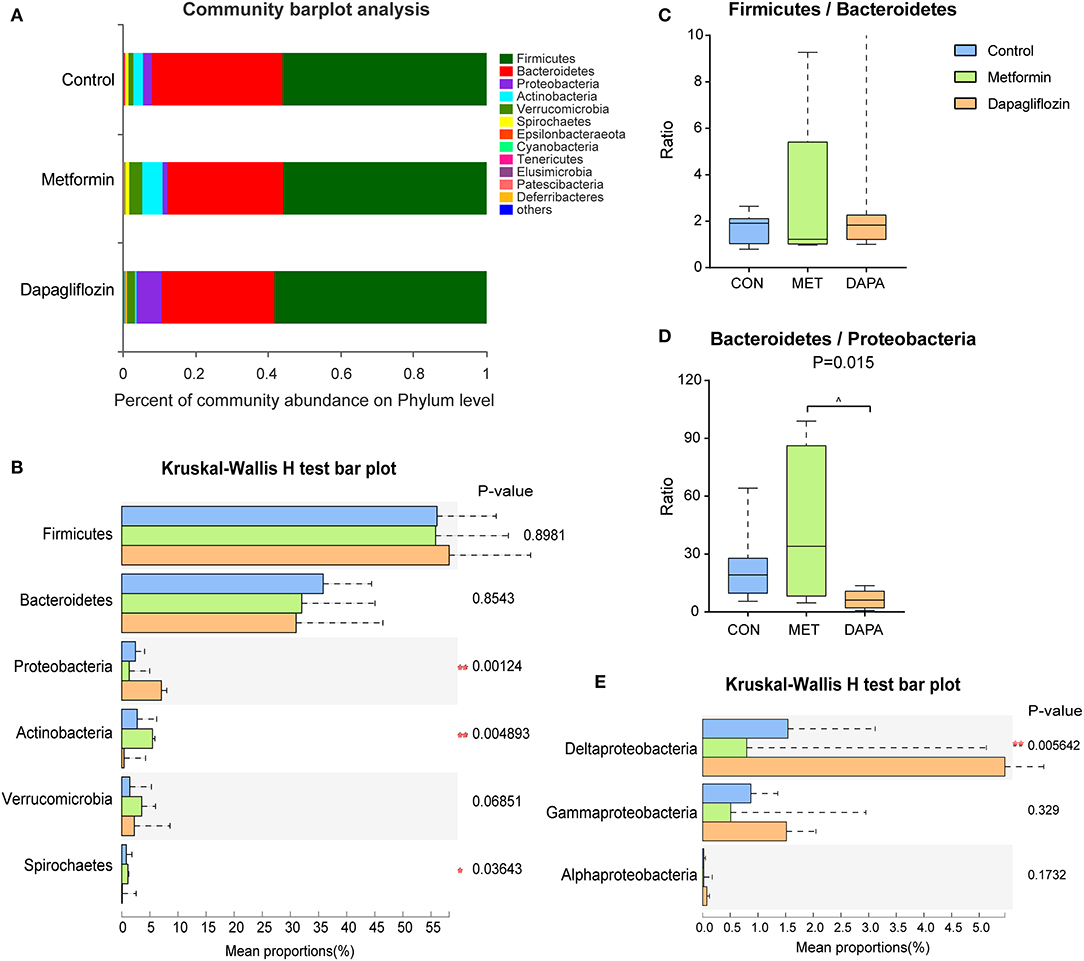 Overall, community diversity was different among the three groups on the family level (Figure 4, Supplementary Figure 2). The analysis of community relative abundance demonstrated that Lactobacillaceae was increased in the metformin group, but decreased in the dapagliflozin group (Figure 4C). Metformin also increased the relative abundance of Bifidobacteriaceae and decreased that of Veillonellaceae compared with dapagliflozin. Desulfovibrionaceae were increased in the dapagliflozin group as compared with the metformin and control group (Figure 4C). Spearman's correlations between the relative abundance of bacterial families and blood glucose were performed. A negative correlation between Desulfovibrionaceae and blood glucose was indicated, especially in the fasting blood glucose and 30 min postload (P < 0.01) (Figure 5). 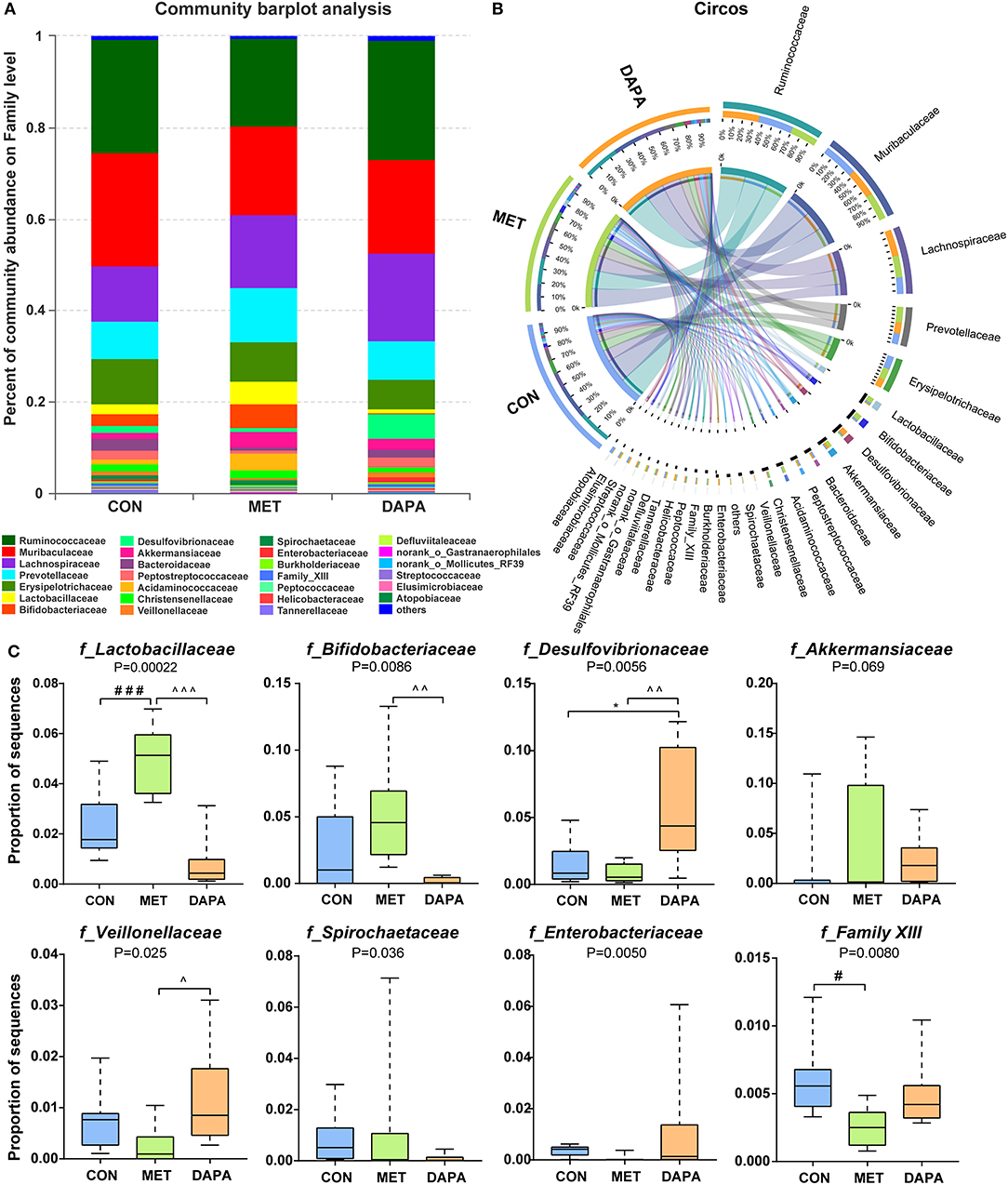 Figure 4. Baterial community abundance on the family level of each group. (A) Community barplot demonstrating the relative abundance on the family level. (B) Circos plot displaying the relationship between samples and bacteria. (C) Relative abundance of core microbial families. * control versus dapagliflozin; # control versus metformin; ^metformin versus dapagliflozin. One special character meant P < 0.05, two meant P ≤ 0.01 and three meant P ≤ 0.001. 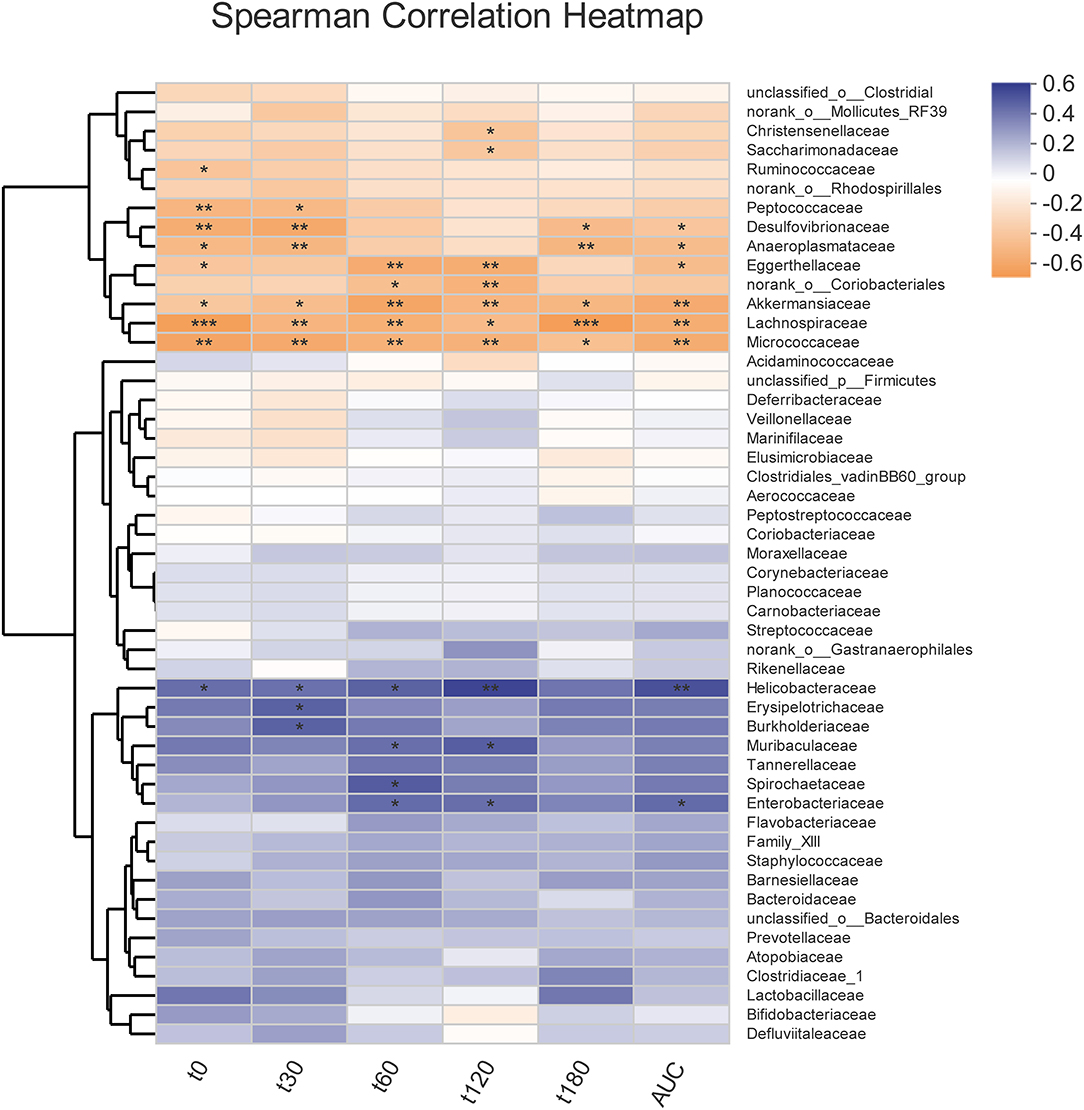 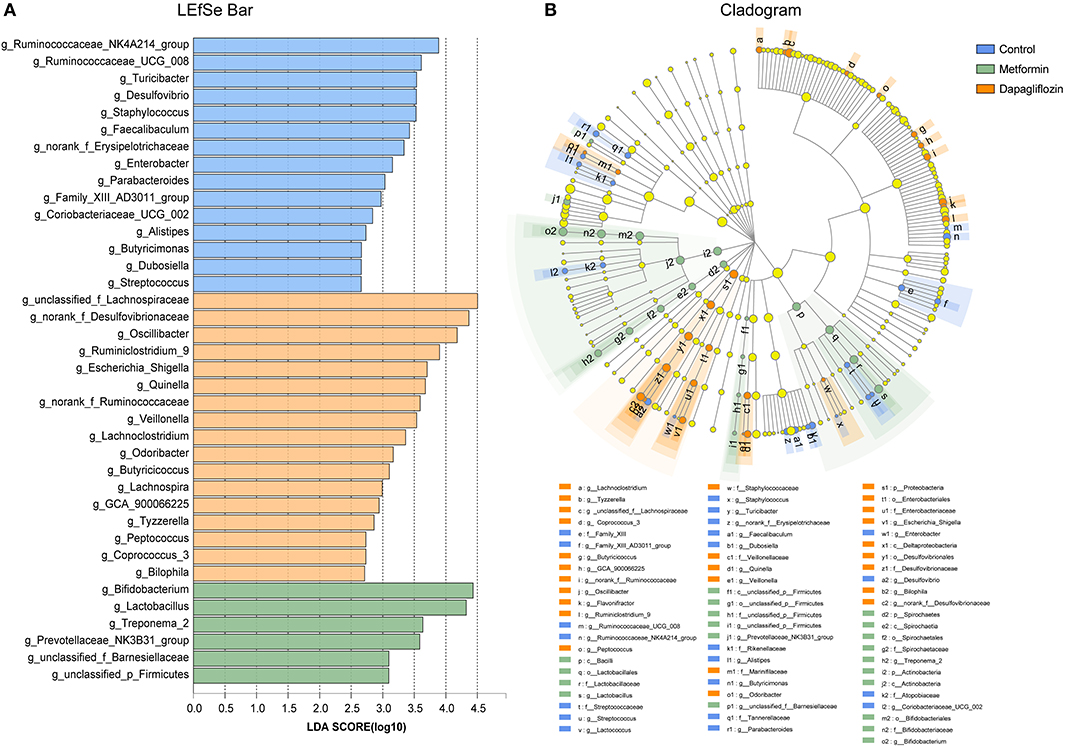 Figure 6. Linear discriminant analysis (LDA) effect size (LEfSe) analysis on genus level among control, metformin, and dapagliflozin group. (A) LEfSe barplot on the bacterial genus level. (B) Cladogram demonstrating the taxonomic levels with phyla in the innermost and genera in the outermost ring. Only LDA score > 2 are shown. All against all as the multiple comparisons. The prefixes “p” represented as phylum, “c” as class, “o” as order, “f” as family, and “g” as genus.

Our study demonstrated that dapagliflozin and metformin monotherapy lowered blood glucose levels to a similar extent. They differentially affected the diversities, and composition of fecal microbiota in type 2 diabetic rats. Of interest, is the result that dapagliflozin had no effects on beneficial bacteria (the abundance of Lactobacillaceae, Bifidobacteriaceae, and Akkermansiaceae when compared with control) and that it increased the relative abundance of Proteobacteria (especially Desulfovibrionaceae).

In our study, dapagliflozin did not increase diversity and richness compared with control via alpha diversity analysis, although it has been indicated that dapagliflozin could reduce richness and diversity in mice (13). This result was in line with a recent human study (14). The reason might be the length and dosage difference of the drug intervention (4 weeks vs. 8 weeks; 1 mg/kg/day vs. 60 mg dapagliflozin /kg diet). Beta-diversity analysis and enterotypes were used to further analyze core microbial composition after different treatments.

The concept of “enterotypes” was driven to get an overview of the robust clustering of samples species variation (18). Dapagliflozin and metformin had differential effects on the composition of fecal microbiota enterotypes on the family level. The Dapagliflozin group mainly displayed with Ruminococcaceae and the metformin group presented Ruminococcaceae and Muribaculaceae (18). Ruminococcaceae was regarded as certain SCFA-producing bacteria (19). A Muribaculaceae-history named the S24-7 belongs to the phylum Bacteroidates (20) and it has been suggested that Muribaculaceae abundance is an important predictor of SCFAs levels (21).

This study has several limitations. Firstly, 16S rRNR gene sequencing rather than metagenomics sequencing was used, which limits species level and function analysis on data interpretation. Secondly, we employed HFD and STZ induced diabetic model, which might be a lack of genetic influence. It might be different in the distribution of the fecal microbiota from other diabetic models such as Zucker diabetic fatty rats in our previous study (16). Thirdly, the model of HFD and low-dose STZ to induce a diabetic model might have some deficiencies, as STZ can destroy the beta cells thereby increasing hyperglycemia. However, this is not just the same case in human T2D since the insulin secretion is unchanged or increased. As diabetes progressed, the function of beta cells in some diabetic patients also declined, but there are differences between animal studies and patients with type 2 diabetes. Therefore, the results of our study may need to be verified by diabetic patients. Finally, this study was only a preliminary observation, and the mechanism needs to be further explored. In future studies, we would like to detect the roles of the Desulfovibrionaceae on the pathophysiology and mechanism of diabetes and obesity.

In conclusion, our study demonstrated preliminary results that dapagliflozin had no effects on the abundance of beneficial bacteria. Of interest, is the observation that dapagliflozin enriched Proteobacteria (especially Desulfovibrionaceae), which were associated with obesity and diabetes. Combination dapagliflozin with metformin might have complementary effects on fecal microbiota in the treatment of diabetes.

The animal study was reviewed and approved by Institutional Animal Care and Use Committee of SLAC.

MY conducted the animal experiments. F-HS wrote the manuscript, modifications, and submission. WenL wrote the methods and results. M-CZ analyzed the data and prepared the figures. R-LF and CQ performed the fecal DNA extraction. WeiL contributed to the study design and review the manuscript. JM was the guarantor of this study who has full access to all the data to guarantee the accuracy and integrity of the data. All authors contributed to the article and approved the submitted version.

The Supplementary Material for this article can be found online at: https://www.frontiersin.org/articles/10.3389/fendo.2020.00635/full#supplementary-material

Copyright © 2020 Yang, Shi, Liu, Zhang, Feng, Qian, Liu and Ma. This is an open-access article distributed under the terms of the Creative Commons Attribution License (CC BY). The use, distribution or reproduction in other forums is permitted, provided the original author(s) and the copyright owner(s) are credited and that the original publication in this journal is cited, in accordance with accepted academic practice. No use, distribution or reproduction is permitted which does not comply with these terms.