The Genetic Association of Polycystic Ovary Syndrome and the Risk of Endometrial Cancer: A Mendelian Randomization Study

Polycystic ovary syndrome (PCOS) is one of the most prevalent reproductive endocrine disorders affecting five to 10 percent of reproductive-aged women around the world, and it greatly influences patient quality of life, fertility and long-term health (1, 2). PCOS is an unexplained heterogeneous clinical syndrome that might be caused by a combination of genetic and environmental factors. Due to the heterogeneity of PCOS, it is clinically diagnosed by multiple diverse diagnostic criteria according to the Androgen Excess and PCOS Society (3), the National Institutes of Health/National Institute of Child Health and Human Disease (NIH/NICHD) (4) and the European Society for Human Reproduction and Embryology/American Society for Reproductive Medicine (ESHRE/ASRM) (Rotterdam criteria) (5). Although there is no consensus on the clinical definition of PCOS, it is well accepted that hyperandrogenism and oligo-ovulation are the main characteristics of PCOS (6). Women with PCOS are at higher risk for comorbidities, including obesity, hyperinsulinemia, insulin resistance (IR), metabolic disorders, infertility, endothelial dysfunction, cardiovascular disorders and the development of cancer. Previous studies have found that PCOS was associated with an increased risk of cancer in the endometrium, ovaries, endocrine glands, pancreas, kidneys and skeletal and hematopoietic system (7, 8).

Mendelian randomization (MR), compared to conventional observational studies, can provide relatively strong and accurate evidence (14). MR analysis is less susceptible to potential environmental or social confounders, as well as reverse causality, because it uses genetic variants that are strongly and solely related to exposure as instrumental variables (IVs) to establish the association between exposure and outcomes. Furthermore, a two-sample MR study, an MR analysis based on data from two independent genome-wide association studies (GWASs), can provide strong evidence of the casual association resulting from their large sample sizes and increased statistical power (15). Several studies using two-sample MR analysis have found the potential relationship between PCOS and gynecologic neoplasms. One study demonstrated that PCOS was causally associated with a reduced risk of invasive ovarian cancer (16). Another study indicated that PCOS was positively correlated with an increased risk of developing breast cancer and, in particular, estrogen receptor (ER) positive breast cancer (17). The association between PCOS and endometrial cancer has, however, not yet been established through MR analysis.

In the present study, we sought to employ information from recent GWAS data on PCOS and endometrial cancer using a two-sample MR method to examine their causal relationship.

SNPs related to PCOS in Europeans were obtained from a GWAS meta-analysis that included 10,074 patients with PCOS and 103,164 health controls of European ancestry (18). In total, fourteen independent single nucleotide polymorphisms (SNPs) were estimated to be corelated to PCOS at the genome-wide significance level (P < 5×10-8). Of these SNPs, none were correlated (r2 < 0.001) in linkage disequilibrium (LD) analysis; one palindromic variant (rs853854) was excluded because of an effect allele frequency (EAF) close to 50% (19). The F-statistic was calculated to avoid weak IV bias (20, 21), where IVs with F-statistics > 10 were considered as strong IVs. In the present study, all IVs were strong IVs; therefore, thirteen SNPs in total were included to construct the genetic IVs for PCOS in Europeans (Table 1).

We identified SNPs that were significantly related to PCOS in Asians from two PCOS GWAS datasets on cohorts of Han Chinese ancestry (22, 23). A GWAS consisting of 4082 PCOS cases and 6687 controls identified three independent SNPs that were strongly associated with PCOS (22). Another GWAS, including 10,480 cases and 10,579 controls, discovered ten novel PCOS-associated SNPs (23). Eventually, thirteen independent SNPs were adopted as IVs for PCOS in Asians after checking for LD (r2 < 0.001), palindromic SNP and weak IVs (Table 2).

Genetic association data on endometrial cancer in Asians were acquired from the BioBank Japan Project (BBJ), which includes 999 cases and 89,731 controls of Asian ancestry (26). BBJ recruited participants from 12 cooperating medical institutions in Japan. The identification of endometrial cancer cases was based on diagnoses by physicians at each hospital. Disease-specific laboratory examinations and imaging data were collected in BBJ (27), but these data did not include information about the histology of the endometrial cancer. Similarly, we extracted overall endometrial cancer–specific beta coefficients and standard errors from the GWAS summary level results for each of the 13 SNPs for PCOS in Asians.

MR is a statistical method of using genetic variants related to a modifiable exposure to examine whether an observational effect between this specific exposure and the outcome is consistent with a causal association (14). To obtain a reliable understanding for MR analysis, three prerequisite assumptions must be satisfied (28): (a) the IVs are strongly associated with PCOS; (b) the IVs can only affect endometrial cancer through their effects on PCOS; (c) the IVs are independent of any confounding factors that may influence the association between PCOS and endometrial cancer. In this case, MR analysis is less susceptible to reverse causation and confounding factors, which may greatly influence the results of epidemiological observational studies.

Regarding sensitivity analyses, MR-Egger regression, weighted median, simple mode and weighted mode methods were employed in our study to assess whether the IVs could affect endometrial cancer merely through their impact on PCOS. MR-Egger regression, a method for detecting small study reporting bias in meta-analysis, was adapted to assess bias from pleiotropic effects. As such, the beta coefficient from an Egger regression can provide a consistent estimate of any causal effect (29). The weighted median method is able to provide a consistent estimate of the finding if more than half of the weight is derived from valid IVs (30). The simple mode method can also provide a consistent estimate if the most common horizontal pleiotropy value is zero, regardless of the type of horizontal pleiotropy. Also, the weighted mode method requires that the largest subset of instruments that demonstrates the same association is contributed by valid IVs (31). We also applied the MR-Pleiotropy Residual Sum and Outlier (MR-PRESSO) method to detect and correct horizontal pleiotropy and potential outliers (32). Finally, the heterogeneity of the association was also tested using Cochran’s Q test on the IVW and MR-Egger estimates. 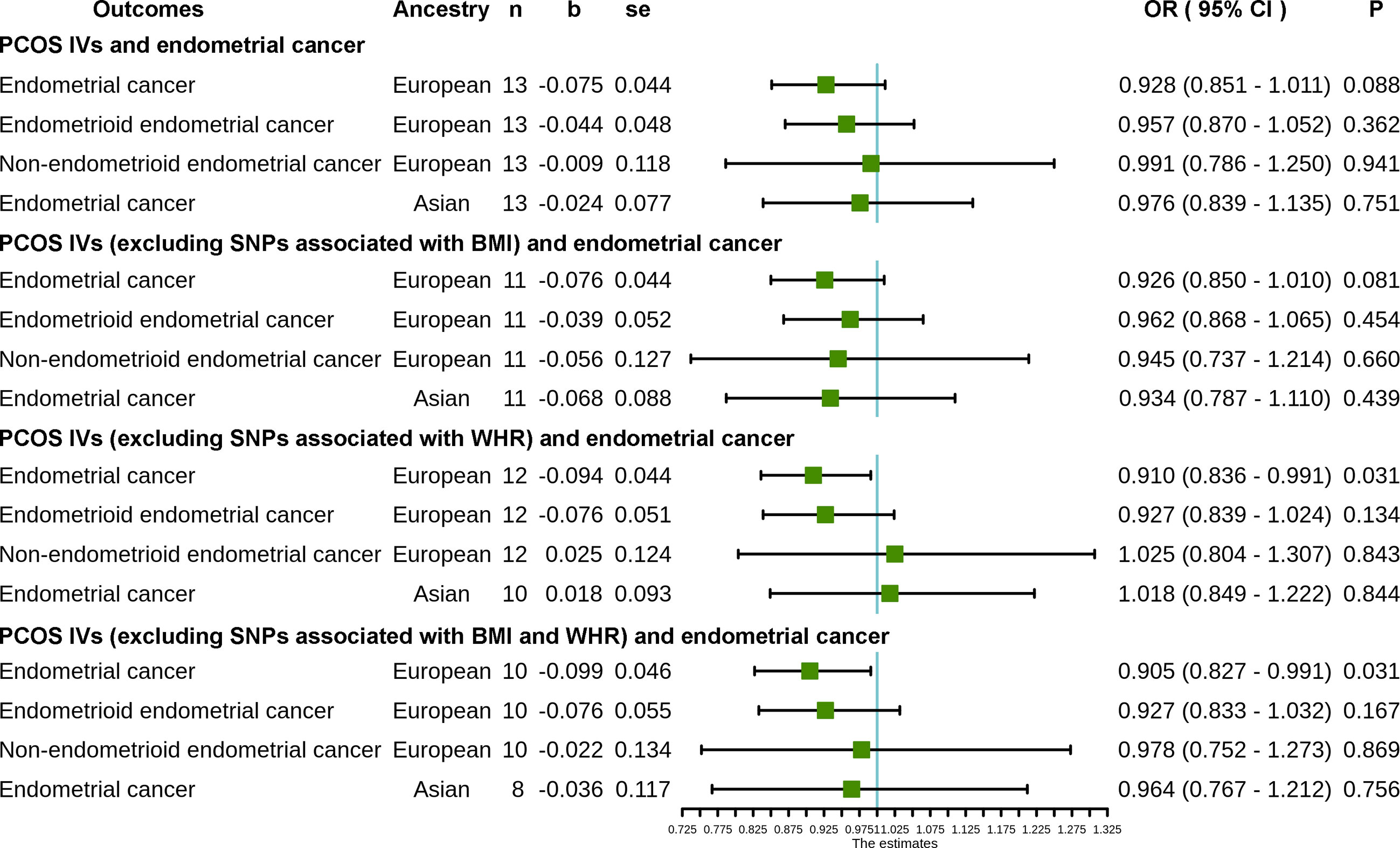 In all cases, the MR-Egger and MR-PRESSO results are not statistically significant (p > 0.05), demonstrating an absence of directional pleiotropy (Table 3). In sensitivity analyses using the weighted median, simple mode and weighted mode methods, the results are similar with those of IVW (Table 3). In addition, we did not detect substantial heterogeneity in any of our results. 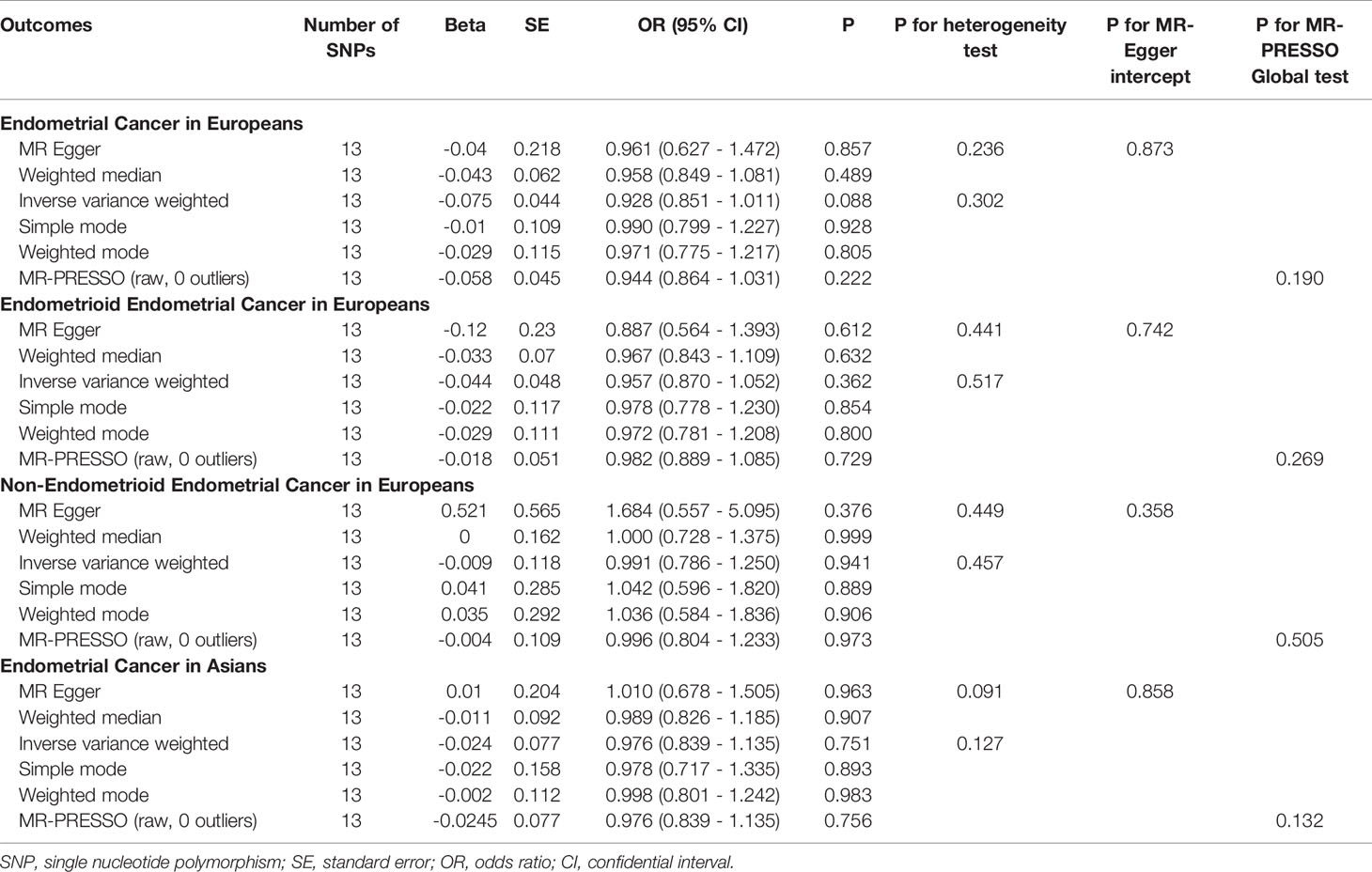 Additional sensitivity analyses also show results similar to our primary findings. We did not observe a statistically significant association between IVs composed of PCOS SNPs not associated with BMI and endometrial cancer in either Europeans or Asians (see Supplementary Table 2).

For the first time, our MR study evaluates the association between PCOS and endometrial cancer, and our findings suggest that PCOS is not causally related to the risk of endometrial cancer in either European or Asian ancestry.

Our study contains several advantages. First, a major strength of this study is its two-sample MR design, which can prevent the influence of reverse causality and potential confounding factors. Second, the study’s IVs are derived from the latest and largest PCOS GWAS in Asians and Europeans (18, 22, 23), and our endometrial cancer data were obtained from the latest and biggest endometrial cancer GWAS in both ethnic groups (24, 26), which can thus better represent exposure and outcomes. Therefore, our study can provide sufficient statistical strength and precise estimates of causal effects. Third, we conducted sensitivity analyses for confounding factors and pleiotropy. Using MR Egger and MR-PRESSO analyses, we did not detect horizontal pleiotropy. In addition, we also assessed the impact of potential confounding factors, such as BMI and WHR (10). After removing SNPs associated with these potential confounders, our MR study suggests that genetically predicted PCOS still does not have any causal association with the risk of endometrial cancer, suggesting that there is no independent association between PCOS and endometrial cancer. Moreover, we stratified our outcomes based on the histotype of endometrial cancer, which was often neglected by previous observation studies. In our study, the inverse relationship between PCOS and overall endometrial cancer in Europeans after removing SNPs associated with (a) WHR and (b) WHR or BMI is diminished by subgroup analysis according to histotype, further revealing the negative association between PCOS and endometrial cancer.

Nonetheless, our study still has several limitations. First, we found that PCOS is not related to endometrial cancer in two ethnic groups based on GWAS data summaries of European and Asian populations. Therefore, it is unclear whether our results are still applicable to other populations. Also, for the analysis in Asians, the selected IVs were based on a Chinese PCOS GWAS, and the outcomes were from a GWAS of Japanese endometrial cancer cases and controls. These two east Asian populations are not genetically identical, but they are genetically closely related and comparable. Studies have reported that the Han Chinese and Japanese ethnic groups show similar patterns for most genetic polymorphisms (43). But some researchers have also found that they are less similar regarding genome-wide variations (44), which may have influenced the accuracy of our study. Second, we did not assess the causal relationship between body weight, BMI, WHR and PCOS, as well as their causal association with endometrial cancer, because previous studies have already investigated these aspects and found that an increase in BMI is causally associated with PCOS and endometrial cancer risk (6, 42, 45, 46). Third, due to limited information, we were unable to verify that the PCOS-related SNPs we selected are related to individuals known for having PCOS in their outcome (i.e. endometrial cancer) databases. The lack of this control experiment decreases the rationality of our study because the association between genetics and clinics cannot be fully verified. Fourth, our study was not able to assess the association between each PCOS phenotype and the risk of endometrial cancer. In our study, the Asian GWAS for PCOS used Rotterdam criteria, whereas the European PCOS GWAS utilized the NIH/NICHD criteria (14.6%), self-reported diagnosis (51.4%) and also the Rotterdam criteria (34.0%) (18). This might affect the specificity of the European PCOS IVs. In 2012, the NIH consensus panel recommended the following clinical phenotype classification for PCOS: (a) Phenotype A consists of ovulatory dysfunction (OD), hyperandrogenism (HA) (clinical or biochemical) and polycystic ovaries (PCO); (b) Phenotype B consists of HA and OD; (c) Phenotype C consists of PCO and HA; (d) Phenotype D consists of PCO and OD (47). We failed, however, to stratify our outcomes according to the different clinical phenotypes of PCOS due to a lack of information and since we were not able to identify the risks of each phenotype of PCOS, which is quite significant in clinical practice. Further studies using different clinical phenotypes of PCOS are needed to fully explore the association between PCOS and endometrial cancer.

In conclusion, based on the MR results generated using data summaries from large-scale GWAS analyses, our observations suggest that genetically predicted PCOS is not related to a higher risk of endometrial cancer.

Publicly available datasets were analyzed in this study. This data can be found here: https://www.repository.cam.ac.uk/handle/1810/289950, https://gwas.mrcieu.ac.uk/datasets/ and http://jenger.riken.jp/en/result.

This work was supported by Sichuan Science and Technology Program [2020YFS0127].

The Supplementary Material for this article can be found online at: https://www.frontiersin.org/articles/10.3389/fendo.2021.756137/full#supplementary-material

Copyright © 2021 Chen, Zhang, Li, Tao, Gao, Xu, Yang, Cheng, Wang and Qin. This is an open-access article distributed under the terms of the Creative Commons Attribution License (CC BY). The use, distribution or reproduction in other forums is permitted, provided the original author(s) and the copyright owner(s) are credited and that the original publication in this journal is cited, in accordance with accepted academic practice. No use, distribution or reproduction is permitted which does not comply with these terms.