Methods: Sixty-eight patients diagnosed with MTC who underwent surgery at our institution between 2009 and 2020 were retrospectively evaluated. Areas under the receiver operating characteristic curves (ROC) and logistic regression were applied to explore the potential risk factors.

Conclusions: PLR, LMR, PDW, and MPV were associated with clinicopathological features and postoperative Ctn progression in MTC, suggesting that those inflammatory indices might be potential biomarkers of MTC.

Cancer-related inflammation plays a central role in the development and progression of malignancies (1). Specifically, In particular, an increasing number of studies have demonstrated the importance of host systemic inflammatory responses in clinical performance and tumor prognosis, and various inflammatory indices, including neutrophil-to-lymphocyte ratio (NLR), platelet-to-lymphocyte ratio (PLR), and lymphocyte-to-monocyte ratio (LMR), are now widely recognized as novel potential biomarkers for predicting cancer outcomes (2–4). Moreover, all inflammatory indices can be obtained as part of a routine complete blood count prior to surgery, so they do not impose an additional burden on patients. This suggests that an inflammation index has good applications in tumors.

Medullary thyroid carcinoma (MTC) originates from the parafollicular C-cells of the thyroid gland, which are derived from the neural crest (5). Although MTC accounts for only 1–2% of thyroid cancers, it is responsible for approximately 13% of all thyroid cancer-related deaths (6). However, there is still a lack of valid biomarkers to evaluate the clinicopathological features and prognosis of MTC. Given the potential of the aforementioned inflammatory indices, we aimed to investigate their potential applications in MTC.

Current American Thyroid Association guidelines recommend measuring serum calcitonin (Ctn) levels in patients diagnosed with histological MTC (5). However, the prognostic value of inflammatory index for postoperative Ctn progression has not been studied in MTC. Therefore, another aim of the present study was to clarify the value of inflammatory indices for postoperative progression of Ctn in MTC.

Design of the Study

The inclusion criteria were as follows: consecutive enrollment and first-time diagnosis of primary MTC, and confirmation of diagnosis by histological analysis and imaging techniques. The following patients were excluded: Patients who had previously received antitumor treatment, including chemotherapy, radiotherapy, and immunotherapy; patients with other primary cancers; follow-up for < 6 months; coinfection or other inflammatory diseases (except autoimmune thyroid diseases such as chronic lymphocytic thyroiditis), not resectable at the time of referral, and lack of relevant information. All patients who met the inclusion criteria during the study period were included in the study. In addition, follow-up was performed, and clinical features and outcomes were assessed. No intervention was performed during the treatment period

A total of 101 patients had an initial diagnosis of MTC. Sixty-eight patients had complete data and follow-up, including preoperative complete blood count, Ctn serum levels, and clinical and histopathological data (Figure 1). 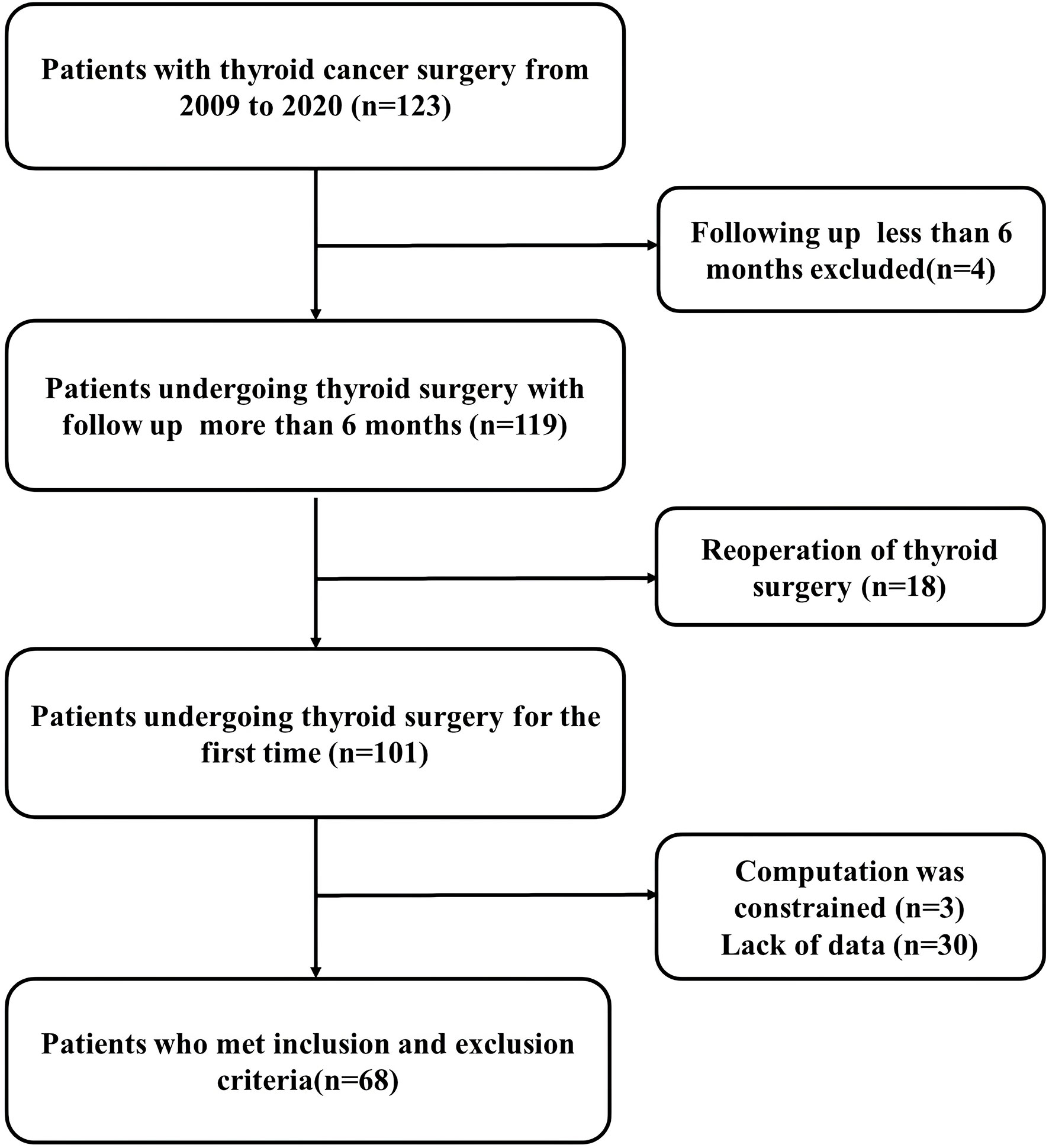 Figure 1 Flow diagram of the patients included in the current study.

This study was approved by the institutional ethics committee of the China-Japan Union Hospital of Ji Lin College. Written informed consent was obtained from all the patients.

Tumor tissue samples were obtained from all patients for histological analysis or surgical resection. MTC diagnosis was based on guidelines (7). Tumor size corresponded to the largest tumor diameter measured on pathological examination after surgery.

Considering the different tumor load of different patients, the assessments time of postoperative ctn can be divided into 1 week, 1 month, 3 months and half a year. If it is lower than the lower limit of detection or within the normal reference range, regular postoperative reexamination is adopted. The initial reexamination period is half a year, and if the condition is stable, it is gradually extended to once a year.

The SPSS package version 23.0 (SPSS) was used to analyze all data. All results are presented as mean ± standard deviation (SD), median, and interquartile range (IQR) or number (%). Fisher’s exact test and rank sum test were used to analyze categorical variables. Continuous variables were analyzed using an ANOVA test or, in the case of non-normal distributions, the Kruskal-Wallis test. Binary logistic regression models were constructed to predict MTC, and the factors that contributed to the outcome in univariate analysis had a P < 0.05. and statistical significance was set at P < 0.05. The receiver-operating characteristic curve (ROC curve) is a graphical representation that illustrates the diagnostic ability of a binary classification system with a varying discrimination threshold.

Characteristics of the Patients 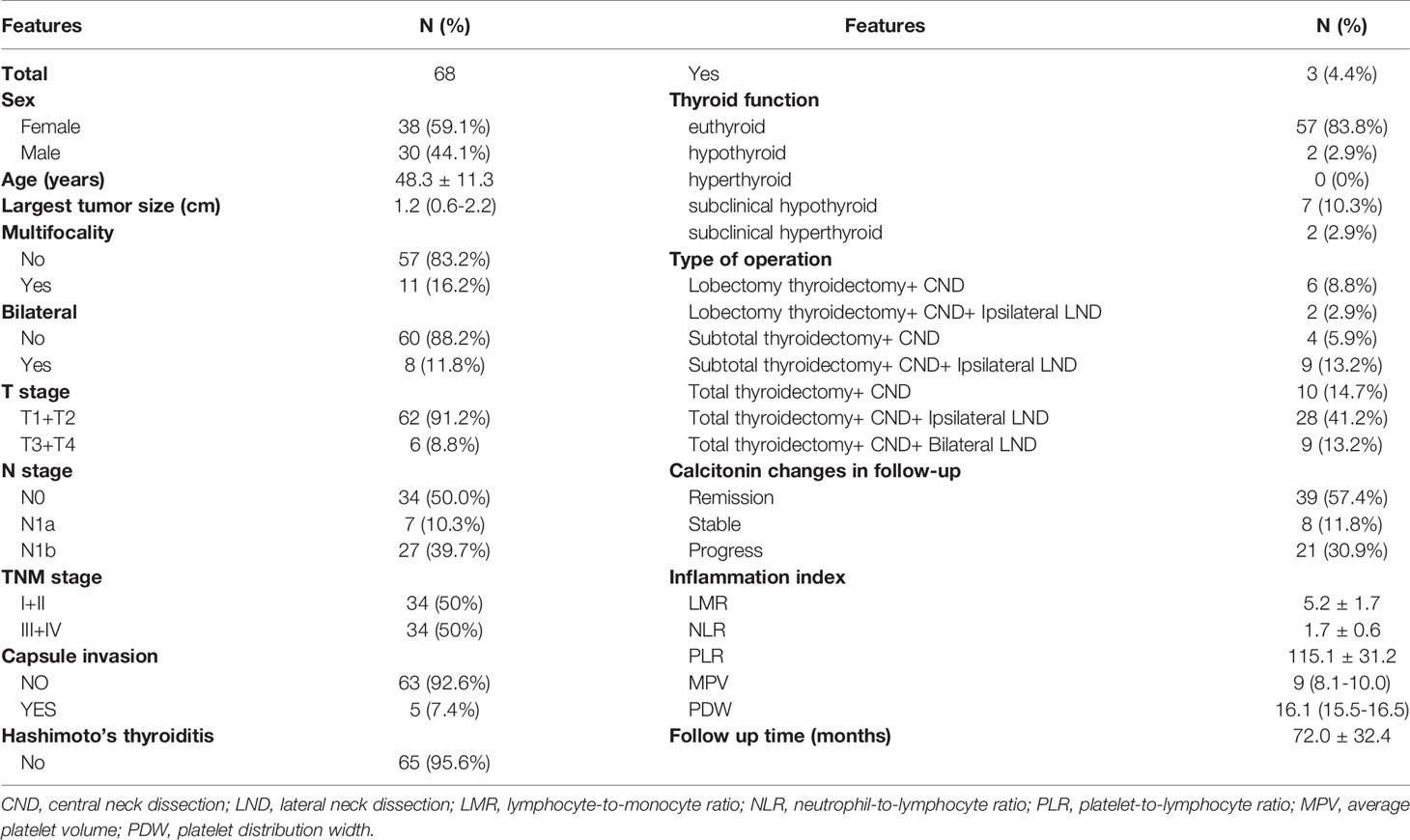 As shown in Figure 2, we used the ROC curve to evaluate the predictive power of each inflammatory index for capsule invasion, lymph node (LN) metastasis, postoperative Ctn progression, and recurrence. The corresponding AUC values are shown in Table 2. For predicting capsule invasion, the AUCs of PLR, PDW and MPV were 0.771 (95% CI: 0.546–0.996, P=0.045), 0.857 (95% CI: 0.726–0.988, P=0.008) and 0.914 (95% CI: 0.833–0.996, P=0.002), respectively. However, LMR and NLR showed relatively low discriminative power. We then checked the discriminative value of each inflammatory indices in LN metastases, central LN metastases, and lateral LN metastases and found that all inflammatory indices had no discriminative power for LN metastases or central LN metastases. However, for predicting lateral LN metastasis, PDW was found to have significant discriminatory power, with an AUC measurement of 0.645 (P=0.044), and a cut-off value of 16.4. Finally, we also examined the predictive performance of inflammatory indices for postoperative Ctn progression and recurrence, although none of them predicted recurrence. LMR and MPV were found to be significantly predictive of postoperative Ctn progression, with AUC values of 0.657 (P=0.040) and 0.728 (P=0.003), respectively. With an LMR cut-off value of 4.7, the sensitivity and specificity were 61.9% and 66.0%, respectively. With an MPV cut-off value of 8.2, specificity was 85.1%, and sensitivity was 61.9%. 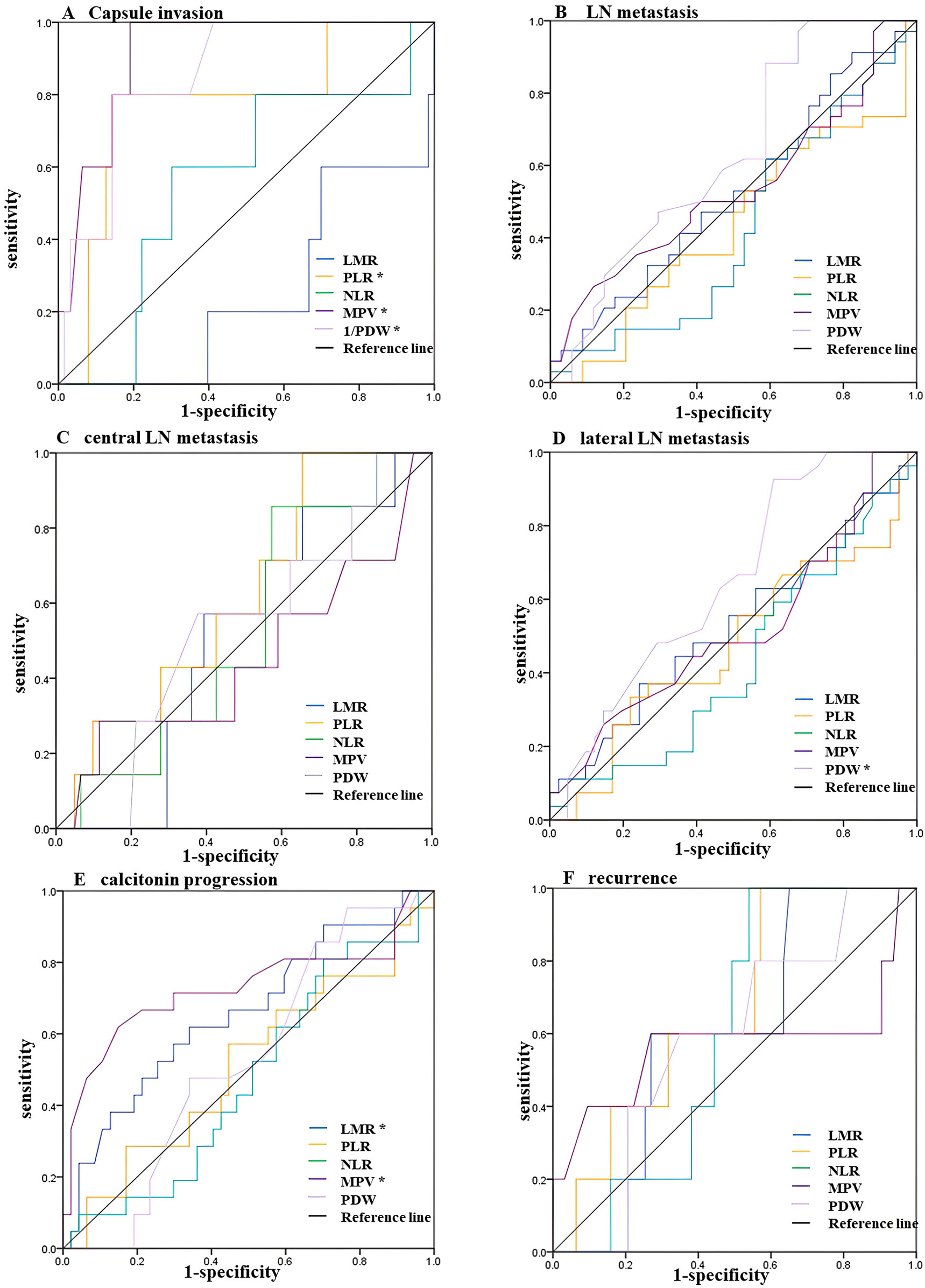 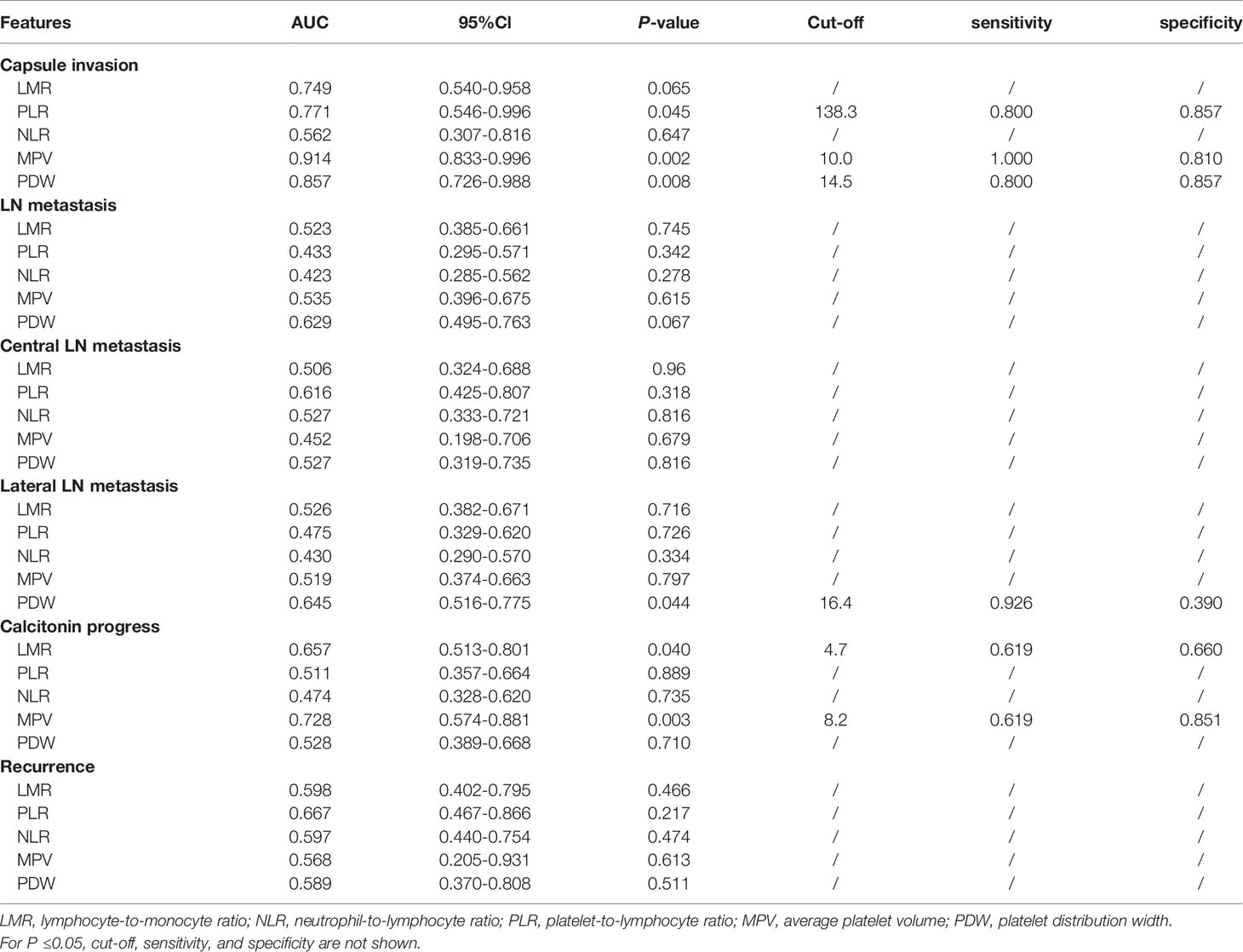 Table 2 Area under the ROC curve.

Table 3 Univariate and multivariate analyses of the risk factors for lateral LN metastasis. 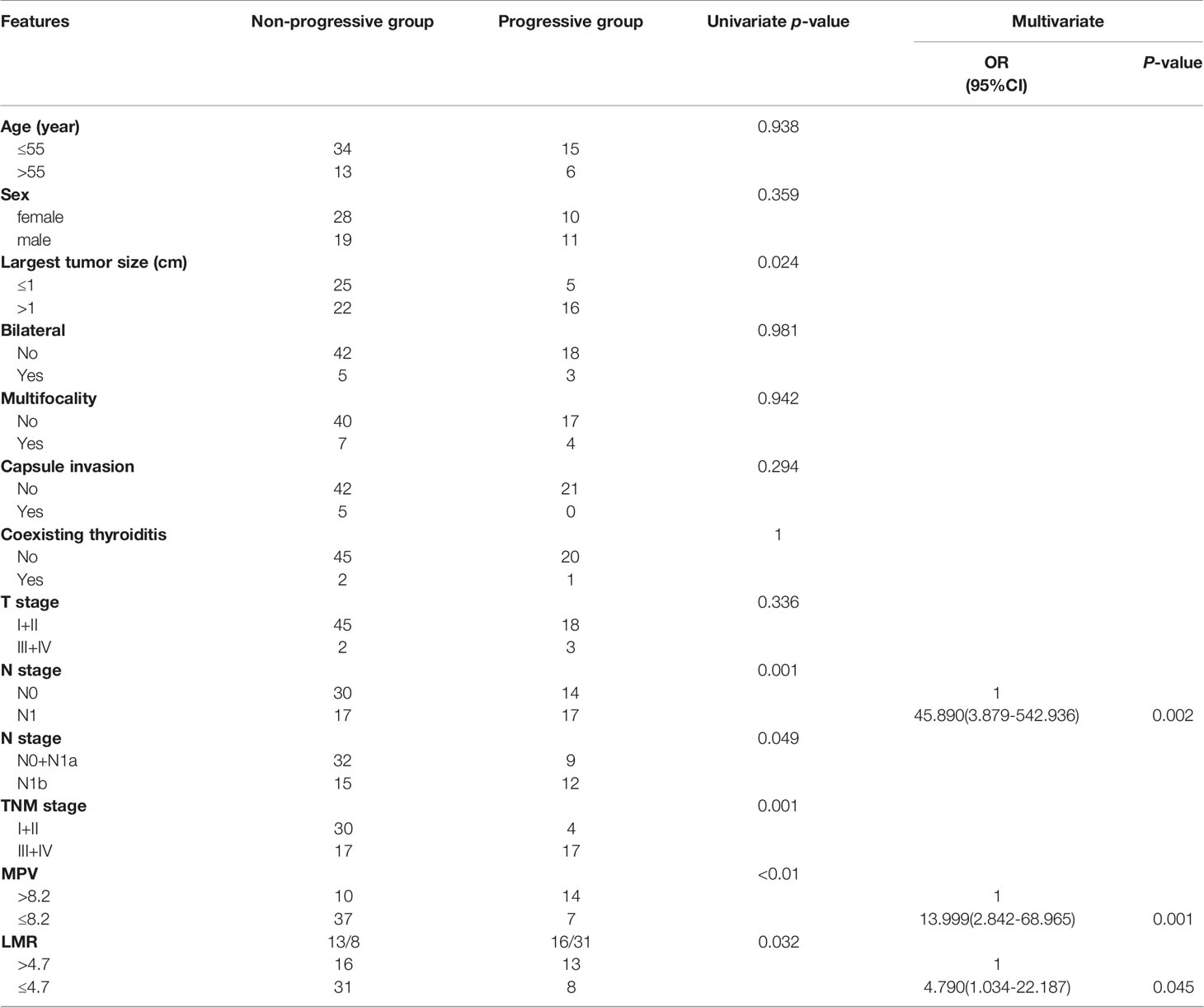 Table 4 Univariate and multivariate analyses of the risk factors for calcitonin progression.

Predictive Performance of MPV and LMR Together for Postoperative Ctn Progression 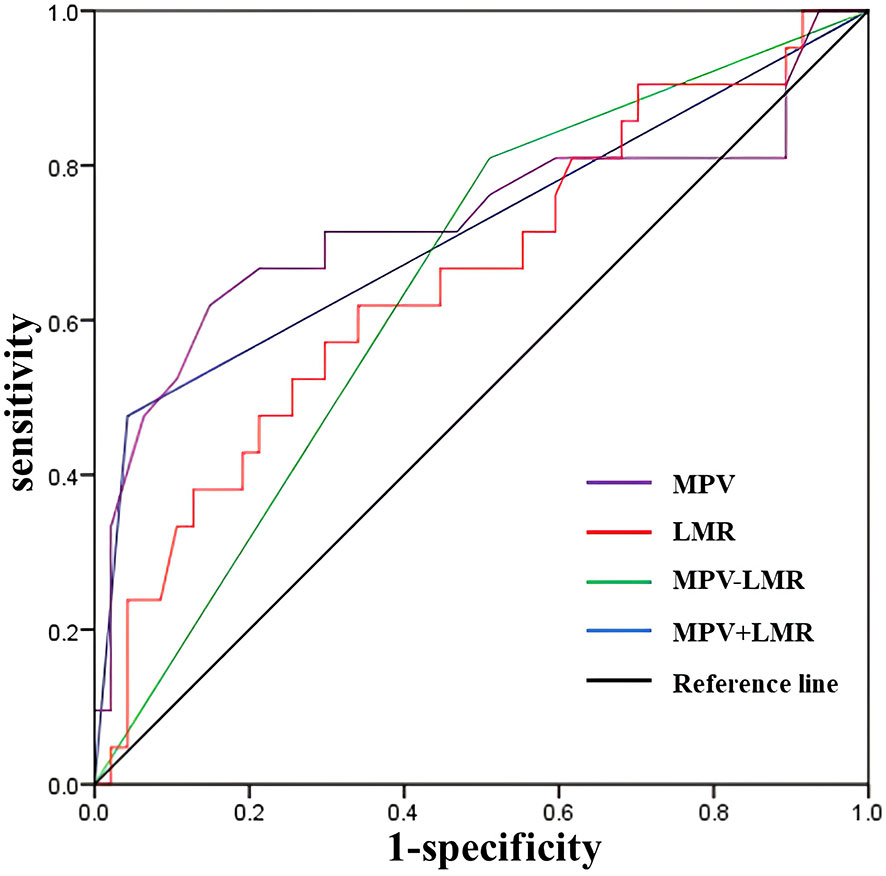 Table 5 Area under the ROC curve.

Previous studies investigated the relationship between tumor invasion and inflammatory indices, but their conclusions were conflicting. After a retrospective analysis of data from 205 patients with papillary thyroid carcinoma (PTC) in Greece, Manatakis et al. found that the NLR was significantly higher in carcinomas with extrathyroidal invasion (2.74 ± 1.24 versus 2.39 ± 0.96, P=0 04) (11), but other studies reached different conclusions (12–16). Also in our study, invasion was found to be not significantly associated with preoperative NLR but significantly associated with high PLR, MPV and low PDW. The specific mechanism is not clear, although it may be possible that the release of various inflammatory mediators induces an increase in platelets, while activated platelets contribute to the release of platelet-derived growth factor, platelet-activating factor, and vascular endothelial growth factor, which accelerate tumor-related blood vessel formation and extracellular matrix degradation, promoting tumor growth and distant metastasis (17). Although lymphocytes are the smallest white blood cells, they can induce the production of various cytotoxins, such as perforin, which directly or indirectly exert anti-tumoral effects (18). To some extent, lymphopenia indicates a weakened antitumoral immune response, which lead to more invasion and poorer prognosis (19). Therefore, PLR could be a potential tumor marker for predicting invasion in MTC.

However, some studies have indicated that platelet activation is related to platelet size rather than platelet number (20). MPV and PDW are common indicators of platelet volume. MPV indicates the mean platelet size and reflects the platelet production rate and stimulation (21). Larger platelets have stronger metabolic and enzymatic activities than smaller platelets (22). After reviewing data from 45 patients with gastric cancer and 20 healthy controls, Osada et al. found that MPV was higher in patients with gastric cancer than in healthy controls (23). However, Inagaki et al. found that the MPV of patients with advanced non-small cell lung cancer was lower than that of the control group (24). Similarly, our study suggests that a high MPV was predictive of invasion (AUC=0.914, 95% CI: 0.833–0.996, P=0.002), but an MPV ≤8.2 (OR=13.999, 95% CI: 2.842–68.965, P=0.001) was a potential independent risk factor for postoperative Ctn progression. This seemingly contradictory phenomenon highlights the complicated interactions between inflammatory factors in the tumor microenvironment. Moreover, it could also be explained by the indolent nature of DTC.

The PDW reflects the uniformity of platelet volume, and higher values indicate that abnormally small and large platelets are in circulation (25). Compared with MPV, PDW is more reliable in evaluating the causes of thrombocytopenia (26). Cheng et al. found a lower PDW in gastric cancer patients compared with the healthy control group and that a PDW ≤ 11.95 was an independent risk factor for disease-free survival of T1 gastric cancer (27). Similarly, we found that PDW had predictive power for invasion and lateral LN metastasis, and that PDW ≤16.4 (OR=0.128; 95% CI: 0.025–0.653; P=0.013) was a potential independent risk factor for lateral LN metastasis. This suggests that PDW is a potential tumor marker for MTC, and the lower its value, the worse the clinicopathological features of the tumor.

Moreover, our study was the first to find that an LMR ≤4.7 (OR=4.790; 95% CI: 1.034–22.187; P=0.045) was a potential independent risk factor for postoperative Ctn progression. Similarly, some studies have indicated that low LMR is associated with poor prognosis of PTC and anaplastic thyroid carcinoma (4, 28). This could be explained by the fact that circulating monocytes can transform into myeloid suppressor cells and tumor-associated macrophages, which are involved in tumor growth, invasion, and metastasis by accelerating the epithelial-mesenchymal transition (29, 30). Finally, we investigated the influence of the appropriate combination of inflammatory indices on diagnostic efficiency. The analysis showed that the sensitivity of MPV-LMR in predicting postoperative Ctn progression increased from 61.9% to 81%, while the specificity of MPV+LMR in predicting postoperative Ctn progression increased from 66% to 95.7%.

Limited by the small number of patients with recurrence (n=5), no significant association between LMR and recurrence was found in our study, but 5 patients were classified as postoperative Ctn progression, and some previous studies found that postoperative Ctn is significantly related to MTC prognosis (31), suggesting that LMR has potential for evaluating MTC prognosis.

Our study has several limitations. First, this was a retrospective analysis. Second, although patients with diseases that could influence complete blood count were excluded, there may have been some unknown or undetectable factors that could potentially influence our results. Finally, the number of cases included in our study was relatively small. Further large-scale and prospective studies are needed to confirm our conclusions.

In conclusion, this study preliminarily explored the potential applications of inflammatory indices in the clinicopathological features and prognosis of MTC. We found that inflammatory indices were associated with the clinicopathological characteristics and postoperative Ctn progression in MTC. Specifically, PDW was predictive of lymph node metastasis, PLR, PDW, and MPV were predictive of capsule invasion, and MPV and LMR were predictive of postoperative Ctn progression. Remarkably, the appropriate combination of MPV and LMR could improve the specificity and sensitivity of predicting postoperative Ctn progression. Overall, this suggests that inflammatory indices are potential biomarkers for predicting the clinicopathological features and prognosis of medullary thyroid carcinoma.

The studies involving human participants were reviewed and approved by China-Japan Union Hospital Institutional Review Board. Written informed consent for participation was not required for this study in accordance with the national legislation and the institutional requirements. Written informed consent was obtained from the individual(s) for the publication of any potentially identifiable images or data included in this article.

The Supplementary Material for this article can be found online at: https://www.frontiersin.org/articles/10.3389/fendo.2022.861869/full#supplementary-material

Copyright © 2022 Li, Zhang, Li, Zhang, Li, Dionigi, Liang and Sun. This is an open-access article distributed under the terms of the Creative Commons Attribution License (CC BY). The use, distribution or reproduction in other forums is permitted, provided the original author(s) and the copyright owner(s) are credited and that the original publication in this journal is cited, in accordance with accepted academic practice. No use, distribution or reproduction is permitted which does not comply with these terms.