At near-normoglycemia remission, the clinical presentation and oral glucose tolerance test (OGTT) are heterogeneous, with 12%–17% having normal glucose tolerance (3, 7). However, normal glucose tolerance did not predict time in glycemic control (3, 7). Accumulating longitudinal evidence from epidemiological studies shows that a 1-h plasma glucose load (1-h PG) level >155 mg/dl during OGTT is a better predictor of type 2 diabetes and cardiovascular disease mortality than fasting glucose 2-h PG load or HbA1c (8–10). In addition, an elevated 1-h PG level is associated with decreased insulin secretion and sensitivity (11), impaired hepatic enzymes (12), and increased accentuation of reactive oxygen species generation (13, 14). However, the association of 1-h PG with hyperglycemia relapse in patients with DKA and SH at new-onset diabetes was never studied. In this study, we evaluated the association of the 1-h PG with the incident hyperglycemia relapse in obese Black patients presenting DKA and SH at new-onset diabetes over a mean follow-up period of 3 years. We also evaluated whether adding 1-h PG significantly improves the prediction of hyperglycemia relapse compared to glucose levels at other time points during the OGTT and HbA1c levels at the time of insulin discontinuation.

This study combined participants from two randomized controlled studies (NCT01099618 and NCT00426413) conducted between 2007 and 2014. The study design inclusion/exclusion criteria are detailed elsewhere (6, 7). Briefly, for both studies, participants with no prior history of diabetes presenting with DKA as defined by the American Diabetes Association (ADA) and SH (blood glucose >400 mg/dl without ketoacidosis) have consented during hospital admission. All subjects had glutamic decarboxylase-65 antibody measured to exclude autoimmune diabetes.

Patient demographics and clinical characteristics were obtained from the electronic medical record and medical history during study visits. OGTTs were performed after at least an 8-h overnight fast. After fasting insulin and glucose levels were measured, 75 g of anhydrous glucose was ingested within 1 min. Glucose and insulin levels were then measured at 15, 30, 60, 90, and 120 min. Analyses of post-load glucose levels were focused on measurements at 1 h.

Baseline characteristics of participants were expressed as means with SD or medians with interquartile ranges (IQRs) for continuous variables and numbers (proportions) with percentages for categorical variables. Since previous studies did not find a significant difference in insulin secretion and sensitivity after insulin discontinuation (6, 7), the data for this study were combined. Because this post-hoc analysis’s primary objective was to assess the predictive power of 1-h PG on incident hyperglycemia relapse, both control (placebo) and intervention groups (metformin, sitagliptin, or pioglitazone) were examined as a single cohort. For the time-to-event analysis, the follow-up length was calculated as the time from near-normoglycemia remission to the date of the first occurrence of hyperglycemia relapse or the last follow-up with the last censoring date of February 2014. To evaluate the optimal threshold of 1-h PG levels to predict hyperglycemia relapse, the 1-h PG levels were identified for the maximum of Youden’s Index, a summary statistic of the receiver operating characteristic (ROC) curve defined as (sensitivity + specificity − 1) (15). To minimize overfitting and to quantify optimism, specificity and sensitivity of the thresholds given were computed with 1,000 stratified bootstrap replicates with a 95% CI. The cutoff value of 1-h PG was appraised according to the least distance from the upper-left corner of the ROC curve. The Kaplan–Meier curves were generated to estimate the cumulative incidence of hyperglycemia relapse by the identified 1-h PG categories at the time of insulin discontinuation; a log-rank test was computed to compare survival distributions. For each subject, Cox proportional hazards models were used to estimate hazard ratios (HRs) and corresponding 95% CIs for incident hyperglycemia relapse associated with the baseline levels of 1-h PG levels. Proportionality hazard assumption in Cox models for all predictors and covariates in a fully adjusted multivariable model was assessed using the Schoenfeld residuals regressed against follow-up time; no violation of proportionality was observed. The biologically relevant or statistically significant variables in univariate analysis for the multivariable-adjusted models were chosen.

The incremental benefit of 1-h PG, 2-h PG, or HbA1c above and beyond the traditional risk factors (age, sex, body mass index (BMI), treatment allocation, and FBG) for predicting the risk of hyperglycemia relapse in patients with DKA/SH were assessed using a model fit, calibration, discrimination, and reclassification. Model fit was determined using the deviance analysis, with lower deviance, which means better model fit. Model calibration was determined using the Hosmer–Lemeshow goodness-of-fit test, with larger p-values (>0.05) indicating good agreement between observed and predicted outcomes. The AUC of the ROC was used to compute model discrimination. Improvement in AUC after adding the 1-h PG, 2-h PG, or HbA1c was estimated using the method of DeLong et al. (16, 17) Finally, continuous/category-free net reclassification improvement (NRI > 0) and absolute integrated discrimination improvement (IDI) was assessed to ascertain the enhanced predictability of glucose biomarkers on the hyperglycemia relapse outcomes (18). 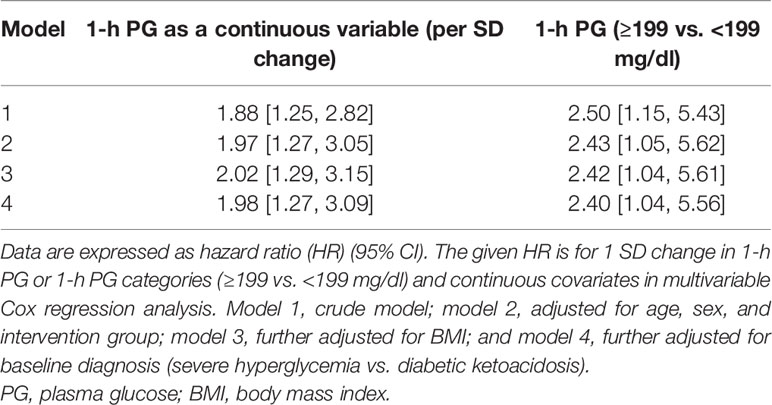 Based on Youden’s analysis, a 1-h PG cutoff of 11.0 mmol/L (199 mg/dl) was found to differentiate the individuals with/without the development of hyperglycemia relapse. The sensitivity and specificity of the optimal cutoff value [11.0 mmol/L (199 mg/dl)] were 64% and 71%, respectively. Then, we dichotomize the 1-h PG values and estimated the association of 1-h PG categories [1-h PGHigh ≥11.0 mmol/L [≥199 mg/dl); 1-h PGNormal <11.0 mmol/L (<199 mg/dl)] on the risk of developing hyperglycemia relapse (Table 1). The aHR shows a 2.5-fold incidence of hyperglycemia relapse with a 1-h PGHigh compared to 1-h PGNormal. Characteristics of participants according to the 1-h PG cut point are shown in Table 2. Participants who were in the 1-h PGHigh category were significantly older and had higher FBG and 15-min, 30-min, and 2-h PG levels. Furthermore, the levels of Si were 76.8% (1.42 vs. 0.33), and DI was 70.0% (0.63 vs. 0.19) lower in individuals with 1-h PGHigh than in those with 1-h PGNormal. We did not observe any significant differences in other variables between the 1-h PGHigh and 1-h PGNormal groups. 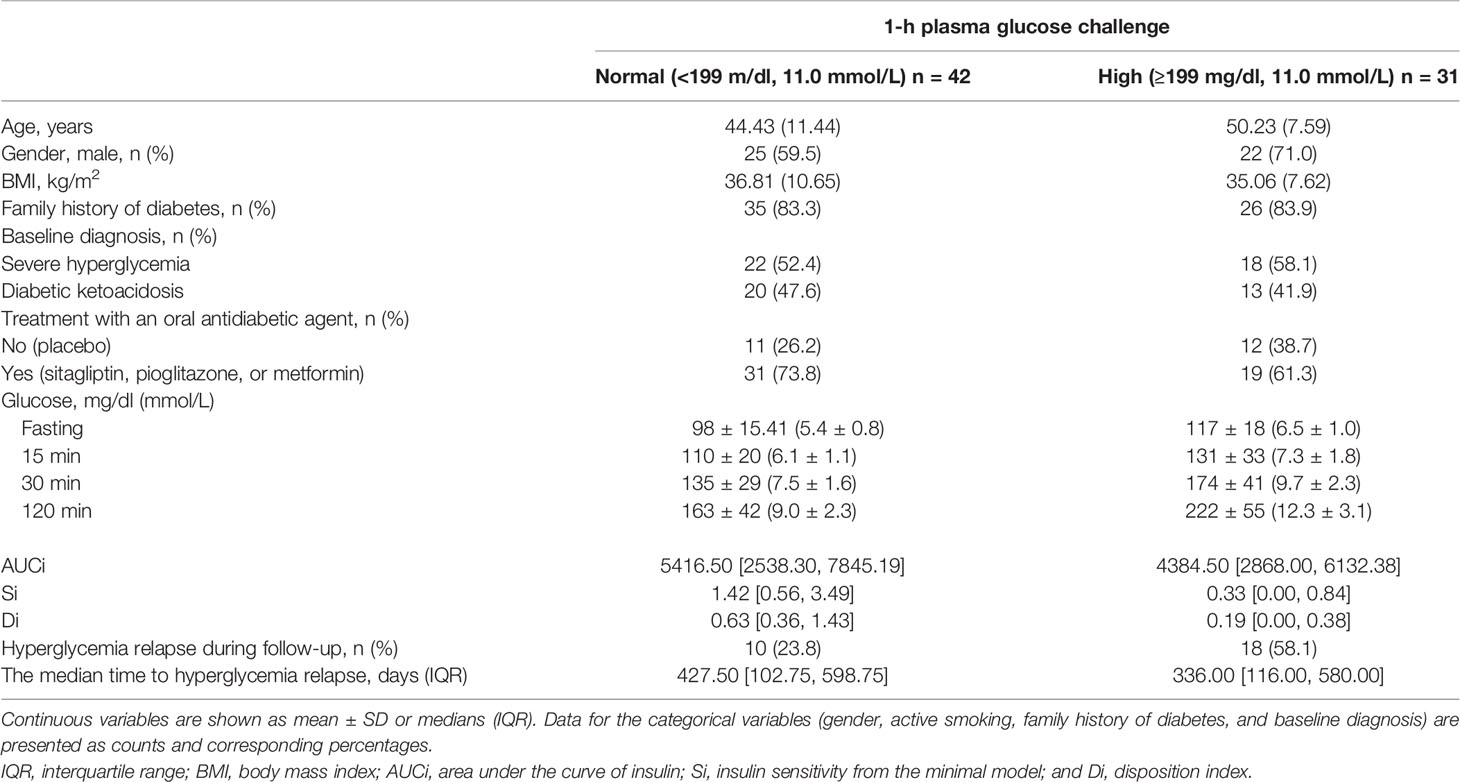 In our analysis, 1-h PG was an independent predictor of hyperglycemia relapse even after adjusting for treatment with an oral antidiabetic agent after insulin discontinuation. Prior studies in our population of patients with DKA and SH showed that normal glucose tolerance status as defined by the ADA was not a predictor of prolonged remission (3, 7). Despite the differences in the initial presentation, the long-term clinical course between DKA and SH does not seem to differ in our previous studies (3, 6, 22). In this current study, despite adjustment for DKA and SH, a high 1-PG was predictive of hyperglycemia relapse. In our previous publication, we found that intervention with oral antidiabetic medication at the time of insulin discontinuation or near-normoglycemia remission predicted longer hyperglycemia relapse-free survival. However, this current study showed that 1-h glucose was predictive of future hyperglycemia relapse independent of having an intervention with an antidiabetic agent. Use of only fasting and 2-h glucose levels in this population may miss abnormalities detected by 1-h PG levels. Insulin secretory abnormalities are present with an abnormal 1-h PG even with normal 2-h PG levels in several different populations (23–25). A recent study showed that the rate of oral glucose absorption is one of the precipitating factors of 1-h PG excursions (26). Oral glucose absorption can be decreased by increased gastric emptying time (27), and gastric emptying time can be reduced by incretin mimetics such as glucagon-like peptide-1 receptor agonists (27, 28). While the oral glucose absorption rate has not been determined in this population, it is possible that people with the higher 1-h PG may be optimally treated with a glucagon-like peptide-1 receptor agonist (GLP-1RA).

The 1-h PG is both practical and cost-effective. The national average time for visits is 84 min (29), which lends that this testing method could potentially be implemented during a routine visit without any increase in appointment duration. As a potential method, a 75-g glucose drink could be administered by clinic staff after patient check-in, followed by the collection of the glucose level 1 h later (30). Additionally, glucose challenge testing with 1-h PG is cost-effective compared to the 2-h OGTT as a gold standard for hyperglycemia screening (31). Since there is no standard of care for optimal follow-up and treatment in our current population after insulin discontinuation, the 1-h PG could be used to determine which patients may need more intensive follow-up and earlier addition of intensification of antidiabetic therapy.

A 1-h PG >155 mg/dl has been proposed as the cutoff associated with metabolic abnormalities in several studies. However, a majority (~70%) of the participants in our study had a 1-h PG >155 mg/dl. Therefore, we performed ROC analysis to predict which 1-h PG level predicted hyperglycemia relapse with a 64% sensitivity for BG > 199 mg/day. This glucose level is potentially too high, and 1 h PG >155 mg/dl leads to metabolic abnormalities. However, 155 mg/dl was validated in patients without diabetes, and therefore, patients with diabetes may need different targets for 1-h glucose levels. Further, our definition of near-normoglycemia remission was chosen to reflect glycemic goals for people with diabetes. The definition of near-normoglycemia remission is variable depending on the study, with some studies in patients with DKA and SH using the definition of HbA1c < 6.3% and off medications for 3 months (4, 22). It is possible that a more stringent definition of near-normoglycemia remission in our study could have resulted in more participants with a 1-h PG <155 mg/dl.

The ADA published a consensus statement in 2021 defining remission as HbA1c < 6.5% and off medications for >3 months (32). We were unable to assess remission as per the ADA definition, as this study was a post-hoc analysis of 2 randomized controlled studies that randomized subjects to a drug or a placebo. Therefore, we used hyperglycemia relapse-free survival in this study. However, even a more rigorous HbA1c cutoff for initial remission showed that most people had dysglycemia on OGTT based on fasting and 2-h PG levels (3, 4). Further, we found that having normal glucose tolerance during OGTT does not predict time in remission while an intervention did (7). The findings from our study highlight that traditional markers used to define remission are not sufficient to predict future hyperglycemia relapse.

In conclusion, 1-h PG of ≥199 mg/dl was independently associated with hyperglycemia relapse in obese Black patients presenting with DKA/SH at the time of diagnosis of diabetes. In clinical use, adopting a 1-h PG check within 1 to 2 weeks after insulin discontinuation may offer a more effective strategy to determine which patients need an aggressive antidiabetic treatment regimen. Future studies in this population will need to be performed where the definition of remission is more stringent and includes 1-h PG and whether treatments targeted to reduce 1-h PG levels will prevent hyperglycemia relapse.

After reviewing the study hypothesis and detailed statistical analysis plan, the de-identified, individual participant-level data that underlie the results will be shared based on the reasonable request. All submissions should be addressed to the senior author (priyathama.vellanki@emory.edu). The applicants will be asked to sign a data access agreement before transferring the de-identified data and requested to get an IRB waiver.

The studies involving human participants were reviewed and approved by Emory University. The patients/participants provided their written informed consent to participate in this study.

The Supplementary Material for this article can be found online at: https://www.frontiersin.org/articles/10.3389/fendo.2022.871965/full#supplementary-material

Supplementary Figure 2 | Calibration plots of the proportion of hyperglycemia relapse within each tenth (identified using deciles) of predicted risk between traditional model and the model including 1-h PG- Hosmer-Lemeshow test.

Copyright © 2022 Jagannathan, Stefanovski, Smiley, Oladejo, Cotten, Umpierrez and Vellanki. This is an open-access article distributed under the terms of the Creative Commons Attribution License (CC BY). The use, distribution or reproduction in other forums is permitted, provided the original author(s) and the copyright owner(s) are credited and that the original publication in this journal is cited, in accordance with accepted academic practice. No use, distribution or reproduction is permitted which does not comply with these terms.