Metyrapone Versus Osilodrostat in the Short-Term Therapy of Endogenous Cushing’s Syndrome: Results From a Single Center Cohort Study

Background: Although surgery is considered the first-line treatment for patients with endogenous Cushing’s syndrome (CS), medical therapy is often required to control severe hypercortisolism. Metyrapone and osilodrostat are both steroidogenic inhibitors targeting the 11β-hydroxylase, however, their therapeutic effectiveness has not yet been directly compared. This study aimed to evaluate metyrapone and osilodrostat in the short-term therapy of CS.

Methods: Retrospective analysis of patients with endogenous CS treated with metyrapone or osilodrostat as monotherapy for at least 4 weeks. Main outcome measures were serum cortisol and 24h urinary free cortisol (UFC) at baseline (T0) and after 2 (T1), 4 (T2), and 12 weeks (T3) of therapy.

Endogenous Cushing’s syndrome (CS) is a rare disorder with an incidence of 0.2–5.0 per million people per year (1). If the underlying glucocorticoid excess is not properly diagnosed and rapidly treated, it may lead to several comorbidities and increased mortality (2–4).

Surgery is considered the first-line treatment for patients with endogenous CS (2), e.g. transsphenoidal adenomectomy in Cushing’s disease (CD) or adrenalectomy in case of cortisol-producing adrenal adenomas (CPA) or adrenocortical carcinomas (ACC). However, medical therapy is often required, e.g. to reduce perioperative risk, to control persistent hypercortisolism after surgery, or in case of advanced disease due to ectopic CS or ACC (5–7). Drugs that are typically used for this purpose are inhibitors of the adrenal steroidogenesis, glucocorticoid receptor blockers, and (in case of CD) somatostatin receptor ligands or dopamine receptor agonists (2). Among the adrenal steroidogenesis inhibitors, metyrapone and osilodrostat selectively inhibit the last enzyme of the cortisol biosynthesis, 11β-hydroxylase (CYP11B1), preventing the conversion of 11-deoxycortisol into cortisol. Metyrapone was first described in the 1950s and is still widely used today (8–11). Osilodrostat was approved by the European Medicines Agency (EMA) only recently, explaining why studies on its therapeutic efficacy are limited (6, 12–17). Furthermore, a direct comparison between metyrapone and osilodrostat has not yet been described.

The primary aim of this retrospective monocentric study was to compare the short-term efficacy of metyrapone and osilodrostat on cortisol levels in patients with endogenous CS.

Patients with endogenous CS admitted to the University Hospital Würzburg were retrospectively reviewed. Those who were treated with metyrapone or osilodrostat as monotherapy for at least four weeks between December 2017 and December 2021 were considered eligible. CS was diagnosed according to established criteria (2, 18, 19). The investigated time points are visualized in Figure 1. Hormonal workup with basal serum cortisol (taken from 08:00 and 10:00 a.m.), serum cortisol after an overnight 1 mg dexamethasone suppression test (DST), and 24h urinary free cortisol (UFC) was performed in all patients before any medical treatment (baseline, T0). Furthermore, biochemical routine parameters (sodium, potassium, transaminases, creatinine, cholesterol, lipoproteins, triglycerides, leukocytes), blood pressure, and electrocardiogram were also evaluated at T0. Follow-up visits were carried out after 2 weeks (T1), 4 weeks (T2), and 12 weeks (T3) of therapy. Analysis of hormonal and biochemical routine parameters (electrolytes, transaminases, creatinine, and leukocytes) was performed at T1, T2, and T3. Cholesterol, triglycerides, and blood pressure were analyzed at T2. Electrocardiography was repeated at T2 and T3 (Figure 1).

All patients provided written informed consent to at least one of two disease-specific clinical registries, which were approved by the local ethics committee of the University Hospital of Würzburg (approval number 88/11 for the European Network for the Study of Adrenal Tumors registry and approval number 85/12 for the Network of Excellence for Neuroendocrine Tumors registry).

As previously performed (20, 21), commercially available analytical procedures were used for measurement of serum and salivary cortisol (the Immulite 2000 Xpi from Siemens), and for the analysis of UFC (a manual radioimmunoassay from Immuntech).

For the analysis of the QTc-interval the Bazzett formula [QTc=QT/√(RR/1seconds)] was used.

Continuous variables were reported as mean ± standard error of mean (SEM) or as median with range, whereas categorical variables were provided as numbers and percentages. Data distribution was evaluated with the Shapiro-Wilk test. Parametric and non-parametric data were analyzed with Student´s T-tests and Mann-Whitney U test, as appropriate. Dichotomic variables were analyzed with the Fisher’s exact test or the Chi-square (χ2) test. To compare the effect of metyrapone and osilodrostat on hormonal and biochemical parameters, a two-way repeated measures ANOVA was used. The delta (change) percentage from T0 to a subsequent study time point was calculated to evaluate the alteration of a parameter during the course of medical treatment with metyrapone or osilodrostat. A p-value < 0.05 was considered statistically significant.

Figure 3 Delta percentage of systolic and diastolic blood pressure and change in number of antihypertensive drugs under metyrapone or osilodrostat treatment during follow-up compared with baseline. Changes in percentage from T0 (baseline) of (A) systolic, (B) diastolic blood pressure after 4 weeks (T2) of metyrapone or osilodrostat therapy compared with baseline (T0). (C) Changes in number of anti-hypertensive drugs after two weeks (T1) and 4 weeks (T2) of treatment in comparison to baseline.

The effect of osilodrostat on the blood pressure allowed a mean reduction of one antihypertensive drug at T1 (Figure 3C).

Metyrapone was discontinued after 4 weeks in 2 patients (both ECS) because of adverse events (asthenia and dizziness). 1 patient under metyrapone was lost to follow-up before T3. In the osilodrostat group, the therapy was discontinued in 1 patient with CD at T2 because of adverse events (depression, asthenia, and nausea), and in 2 additional patients after tumor resection (1 CD and 1 ECS). Another patient under osilodrostat did not show up at T3 for unknown reasons and was lost to follow-up.

As reported in Figure 4, a progressive increase of the QTc-interval was identified in the osilodrostat group, but not in the metyrapone one (455 ± 23 ms vs 432 ± 3 ms). Of note, in 1 patient under osilodrostat it was necessary to interrupt the therapy at T3 because of a QTc of 503ms. 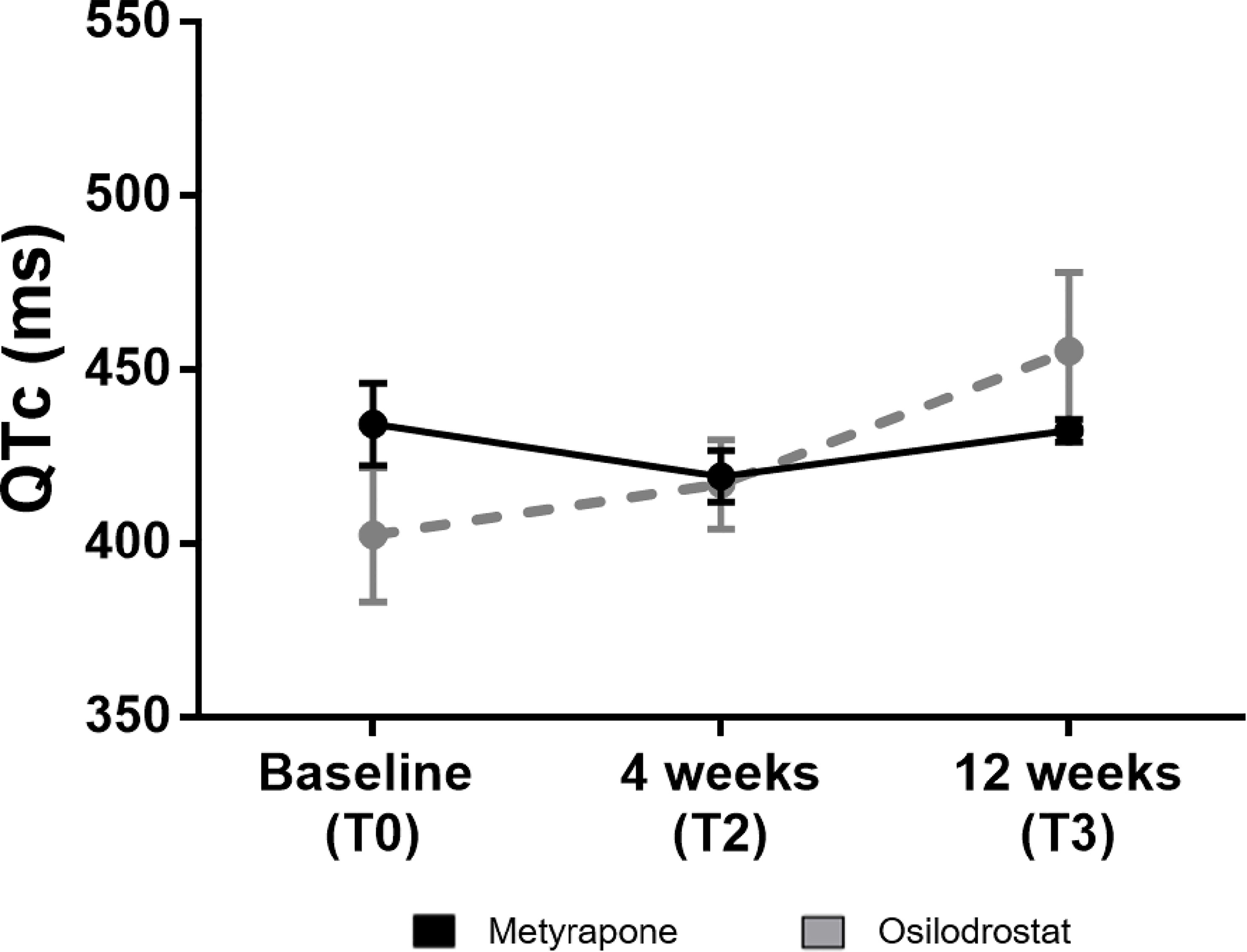 We observed a not clinically relevant increase in creatinine levels in both groups (at T3 from T0, +2.4% under metyrapone, vs +15.3% under osilodrostat; Supplementary Figure 1C).

We performed a retrospective analysis of patients with CS comparing the short-term effects of metyrapone and osilodrostat on hypercortisolism. Our data suggest that osilodrostat could reduce cortisol levels more rapidly than metyrapone, thereby allowing a better blood pressure control. Nevertheless, adverse effects like QTc prolongation under osilodrostat need to be carefully evaluated during therapy.

The efficacy of osilodrostat in different forms of CS was highlighted in previous studies, with a cortisol-normalization achieved 15 to 44 days after treatment initiation (6, 12–14, 16). In few of these cases, however, patients were previously or concomitantly treated with other drugs for hypercortisolism (13, 17). In our cohort, a reduction in UFC was obtained already after 2 weeks of therapy with osilodrostat, with a normalization of cortisol levels after 4 weeks in 42.9% of patients. This was achieved with a relative low dose of osilodrostat (6 mg/day), considering that a mean dose of 10 mg/day was reported in more than half of the patients in the phase III LINC3 trial (6). On the contrary, the metyrapone-dose was relatively high compared with a previous prospective study, in which mean doses of 750 mg and 1000 mg were reported after 1 and 3 months of treatment (8). Although the applied drug dosages of osilodrostat and metyrapone could not be directly compared, with this study we demonstrated that cortisol could be normalized with a relatively low dose of osilodrostat. Moreover, a faster decrease of UFC was achieved with osilodrostat, indicating that osilodrostat might have a superior short-time efficacy compared to metyrapone. However, this result needs to be further validated in larger (ideally prospective) studies.

The current study illustrated that metyrapone has an increasing efficacy over time. In detail, after a mild decrease of cortisol levels after 2 weeks and 4 weeks, an impressive reduction in UFC and a normalization of cortisol levels in 66.7% of the patients were identified after 12 weeks of therapy. This is in accordance with a previous report, where a 70% cortisol normalization rate was observed after 3 months (8).

Hypokalemia is a well-known adverse effect of both metyrapone and osilodrostat. In fact, the inhibition of CYP11B1 indirectly causes an increase in steroid precursors with mineralocorticoid activity (6, 8). Aware of this adverse effect, we routinely performed potassium controls, and 2 patients under metyrapone and 3 patients under osilodrostat received an oral potassium replacement therapy. However, none of the patients presented severe hypokalemia (potassium <2.5 mmol/L). In patients receiving oral supplementation, potassium levels increased to the normal range.

In the LINC 3 study, 4% of the patients showed an increase in ALT or AST under osilodrostat treatment (6). In our small study, no increase of transaminases during osilodrostat therapy was detected. This discrepancy could be due to the relatively lower dosage of osilodrostat that was used in our patients. Although hepatically metabolized, metyrapone it is not known to induce hepatic injury (2).

The current analysis has certainly relevant limitations. First, due to the rareness of CS and the very recent approval of osilodrostat by the EMA, the number of patients in both treatment groups is still very low and, therefore, the power for statistical comparisons is limited. Additionally, some patients were lost to follow-up or interrupted the therapy so at T3 only a reduced amount of patients was analyzed. Second, a retrospective design is always prone to bias and, obviously, no standardized management (e.g. regarding the dosage and follow-up visits) was implemented. This approach might have underestimated the adverse events. Third, both groups were inhomogeneous in terms of CS subtypes and clinical characteristics (although serum cortisol and UFC were comparable).

Nevertheless, to our knowledge, this is the first study that directly compared metyrapone and osilodrostat as short-term therapy of endogenous CS. The present analysis is, therefore, relevant for daily clinical practice, facilitating the choice of a certain steroidogenesis inhibitor when a prompt decrease of cortisol levels is indicated. Osilodrostat might be superior in rapidly reducing cortisol excess, but also clinical parameters like blood pressure. However, careful monitoring of the QTc intervals is required.

The studies involving human participants were reviewed and approved by the University Hospital of Würzburg (approval number 88/11 for the European Network for the Study of Adrenal Tumors registry and approval number 85/12 for the Network of Excellence for Neuroendocrine Tumors registry). The patients provided their written informed consent to participate in this study.

MD and BA designed the research. MD, BA and UD performed the statistical analyses and drafted the manuscript. All authors collected samples and clinical data from patients, contributed to writing the manuscript, and approved the final version to be published.

The Supplementary Material for this article can be found online at: https://www.frontiersin.org/articles/10.3389/fendo.2022.903545/full#supplementary-material

Copyright © 2022 Detomas, Altieri, Deutschbein, Fassnacht and Dischinger. This is an open-access article distributed under the terms of the Creative Commons Attribution License (CC BY). The use, distribution or reproduction in other forums is permitted, provided the original author(s) and the copyright owner(s) are credited and that the original publication in this journal is cited, in accordance with accepted academic practice. No use, distribution or reproduction is permitted which does not comply with these terms.

Insights in Cushing’s Syndrome and Disease