The adaptation of women during pregnancy leads to a feto-maternal immune tolerance, which is disrupted in the settings of preterm birth. Reasons for preterm birth are often associated with rather pro-inflammatory conditions at the feto-maternal interface (e.g., infection, age, stress) (1). With a compromised and immaturely developed immune system, preterm infants are exposed to the extrauterine environment leading to a high susceptibility for infections and sustained lung inflammation, such as bronchopulmonary dysplasia (BPD) of particular very early preterm infants (2–4).

The endogenous Immunoglobulin G (IgG) production in infants starts within 1–3 months after term birth (5). Therefore, specific immune protection of infants against pathogens is provided by the active transport of IgG through the placenta probably exclusively via the neonatal Fc receptor (FcRn) (6–10). However, IgG concentrations of the fetus are largely diminished in the second trimester of pregnancy. Specifically, during week 17–22 of gestation only 5–10% of maternal IgG concentrations are transported via the placenta, which rises to 50% during week 28–32 of gestation (11). Hence, reduced IgG concentrations in preterm infants might contribute to their predisposition for infection (9).

In addition, a resulting reduced total amount of anti-inflammatory galactosylated and sialylated IgG antibodies (12) or, even more, qualitative changes in the type of IgG Fc glycosylation might have an impact on the specific risk profile of preterm infants including inflammation-mediated diseases. IgG Fc glycosylation patterns are characterized as follows: IgG molecules bare an N-glycosylation site on the conserved asparagine at position 297 (N297) of each heavy chain CH2 domain. The glycan is composed of a biantennary core heptasaccharide comprised of four N-acetylglucosamines (GlcNAc) and three mannoses (Figure 1A). The core structure can be further modified by addition of fucose, bisecting GlcNAc (bisection), galactose (G), or sialic acid (S) (13, 14). 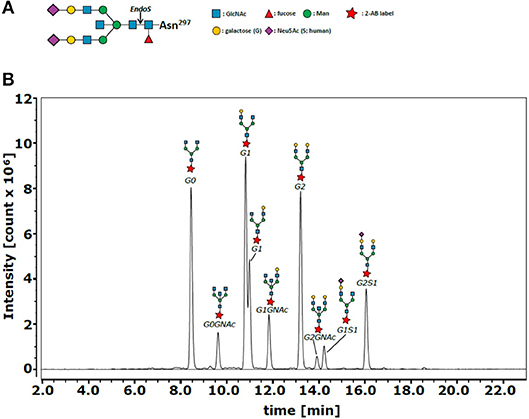 In humans, IgG Fc glycosylation patterns are variable and influenced by several factors, such as genetics, gender, age, and disease state (29–31). During pregnancy, the degree of galactosylation and sialylation of IgG antibodies increases whereas the degree of bisecting GlcNAc slightly decreases (32–36), which may contribute to the tolerance at the feto-maternal interface. Recent data from cord blood samples have confirmed that the proportion of galactosylated and sialylated IgG is higher in infants at term birth compared to older children as expected from the IgG Fc glycosylation pattern of pregnant women (37).

We performed an explorative study in two tertiary care centers for neonates as part of our Immunoregulation of the Newborn (IRoN) study. Samples and clinical data were obtained from infants born between January 1st, 2012 and May 1st, 2015 (center 1; analyzed plasma IgG concentration of infants at mean ± SD 23 ± 2 days of life) and October 1st, 2014 and August 1st, 2017 (center 2; analyzed IgG Fc glycosylation at mean ± SD 32 ± 5 days of life). The inclusion criteria were preterm infants with gestational age ≥23.0 and ≤ 35.0 weeks without lethal abnormalities, and written informed consent provided by parents or a legal representative. At center 2 (IgG Fc glycosylation), term infants served as controls (blood withdrawal with routine newborn screening at 48–72 h of life). Form mothers of preterm infants born in center 2, we were able to obtain maternal blood from a routine sampling immediately after birth.

Gestational age was calculated from the best obstetric estimate based on early prenatal ultrasound and obstetric examination.

Early-onset sepsis (EOS) was defined as sepsis, clinical or culture-proven, occurring within the first 72 h of life.

Late-onset sepsis (LOS) was defined as sepsis, clinical or culture-proven, occurring after the first 72 h of life.

Blood culture-confirmed sepsis was defined as clinical sepsis with proof of causative agent in the blood culture.

Intraventricular hemorrhage (IVH) was defined according to Papile ultrasound criteria.

Bronchopulmonary dysplasia (BPD) was defined as need for oxygen supplement and/or respiratory support at corrected age of 36 weeks.

Peripheral blood (EDTA) samples were stored at room temperature and processed within 24 h after withdrawal. Samples were spun down for 6 min at 1,500 rpm. The clear plasma fraction was transferred and immediately stored at −80°C until further use.

All data were analyzed using GraphPad Prism®version 7. After testing for normal distribution, Kruskal-Wallis test followed by Dunn's multiple comparisons test or the Mann-Whitney test was used for not normally distributed data. Correlations were evaluated using Spearman correlation. Two-way ANOVA followed by Bonferroni's multiple comparison test was done for correlation with clinical parameter. The threshold for significance was a p-value < 0.05 depicted as *, < 0.01 as **, < 0.001 as ***, and < 0.0001 as ****.

We recruited a cohort of preterm infants in two centers and collected plasma from peripheral blood samples and key clinical outcome parameters. In samples of center 1 we analyzed plasma IgG concentrations and in samples of center 2 we investigated IgG Fc glycosylation. To analyze whether plasma IgG concentrations and Fc glycosylation patterns differ with gestational age, we divided the cohort in 2 gestational age groups (center 1/center 2: ≥23(+0 days) and ≤ 27(+6) weeks, n = 19/n = 43; ≥28(+0) and ≤ 34(+6) weeks, n = 19/n = 43; Tables 1, 2). 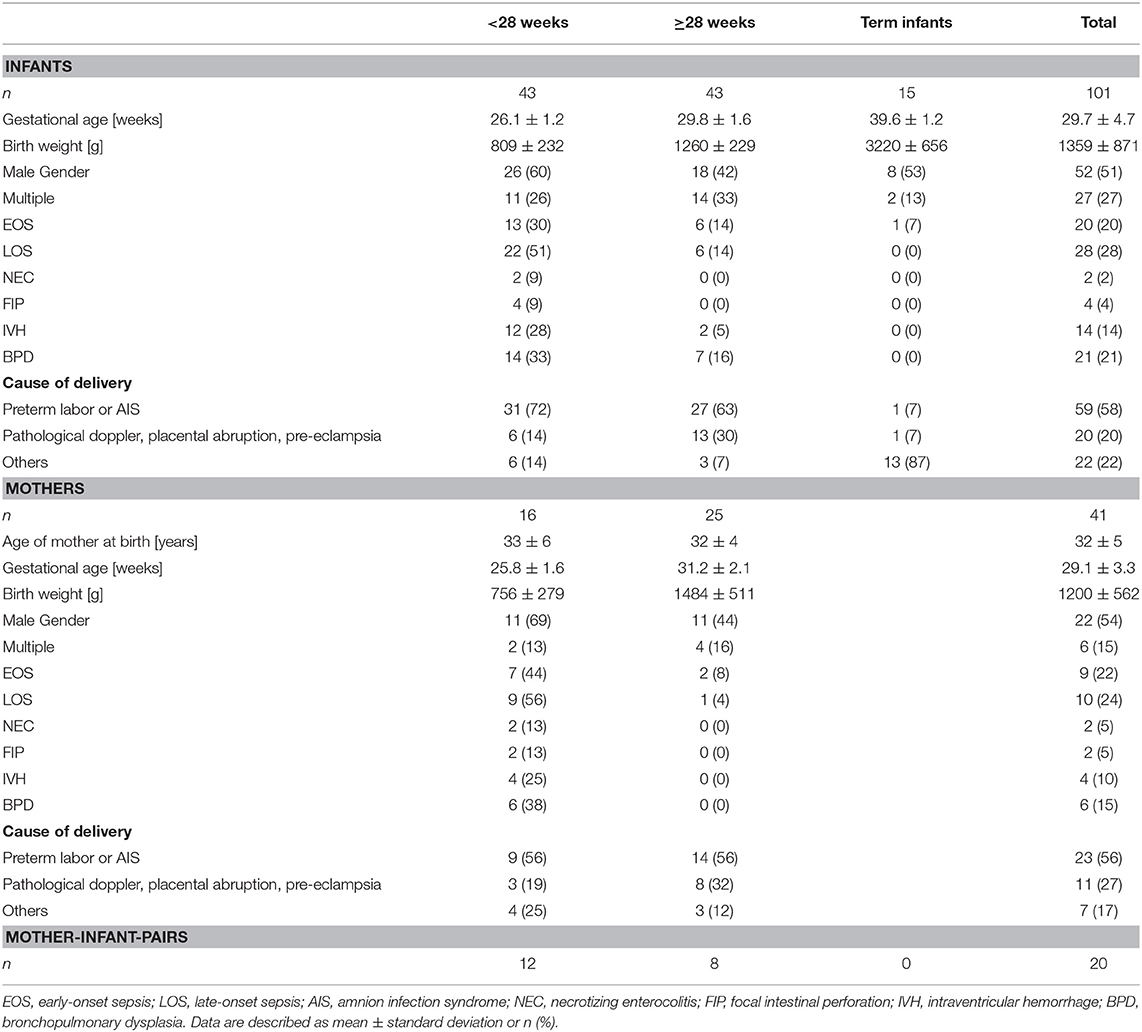 The cohort of center 1 (plasma IgG concentration) was also selected for a matched pair analysis of BPD diagnosis vs. no BPD. For this matched pair analysis early onset sepsis cases were excluded, and late onset sepsis cases were equal in both groups. In center 2, we also analyzed IgG Fc glycosylation patterns of term infants (n = 15) and mothers of preterm infants (n = 41) (Table 2). For a subgroup of preterm infants and mothers from center 2, we were able to analyze mother-infant-pairs (n = 20).

As outlined in Figure 2, IgG was detectable in infants born < 28 weeks of gestational age and increased significantly with gestational age. Plasma IgG concentrations were not different in a matched pair analysis of preterm infants developing BPD vs. no BPD diagnosis (data not shown). 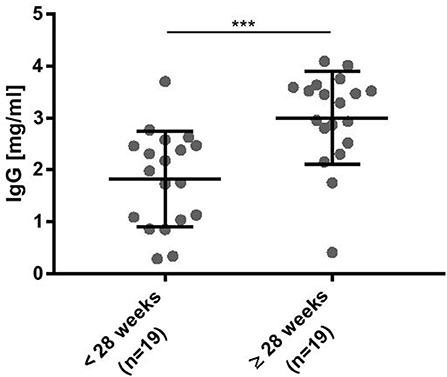 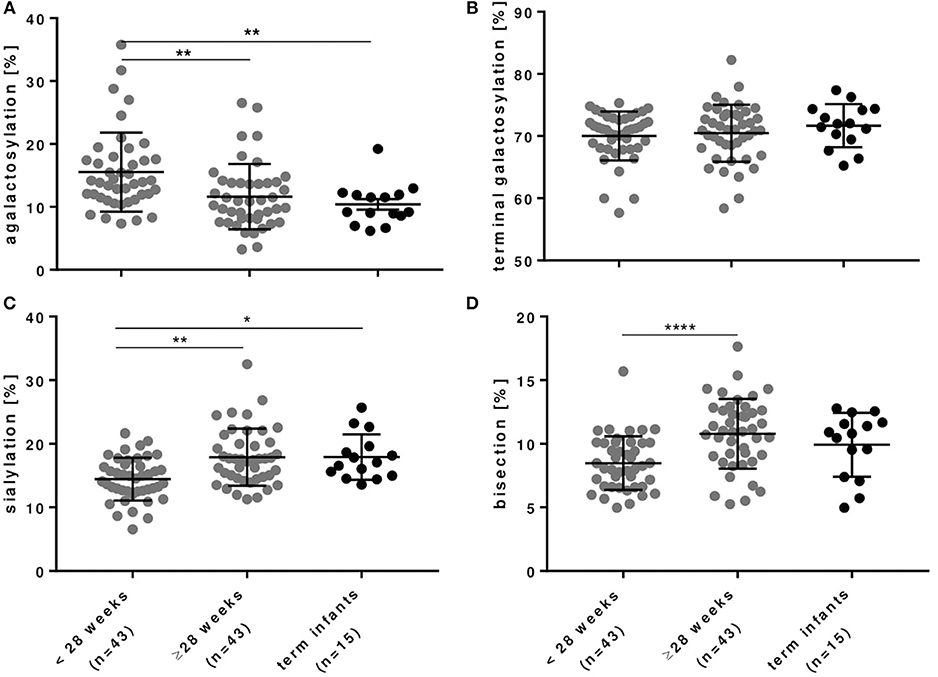 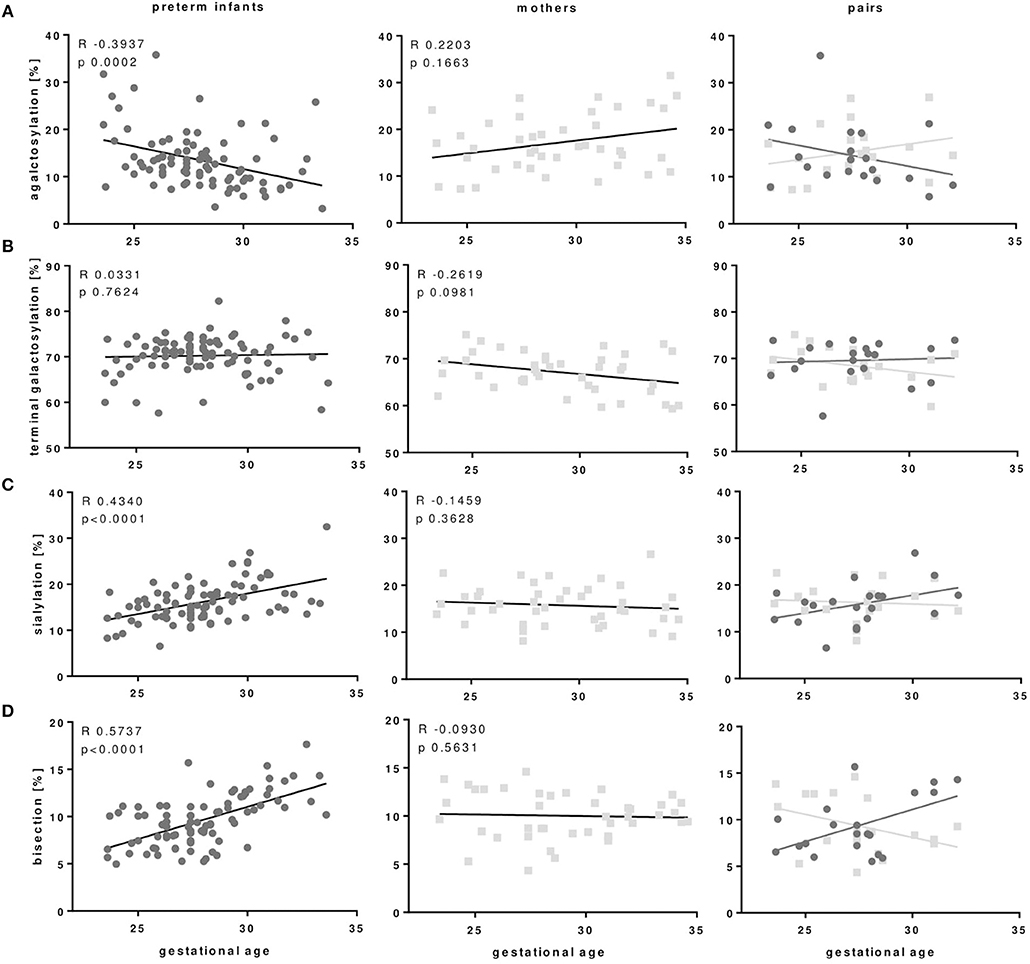 For the cause of preterm delivery bisecting IgG Fc glycosylation was significantly decreased in preterm infants born ≥28 weeks of gestation with preterm labor or amnion infection syndrome (AIS) as compared to other preterm delivery reasons (Table 4). 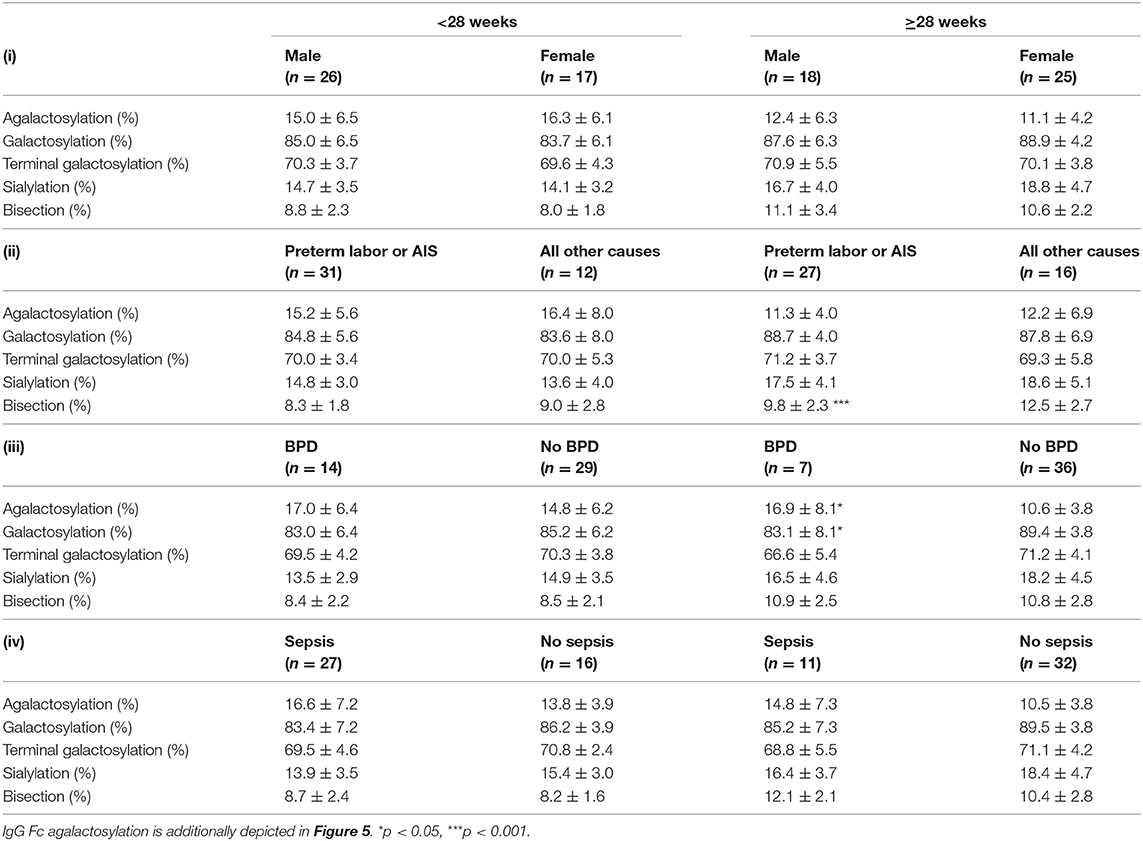 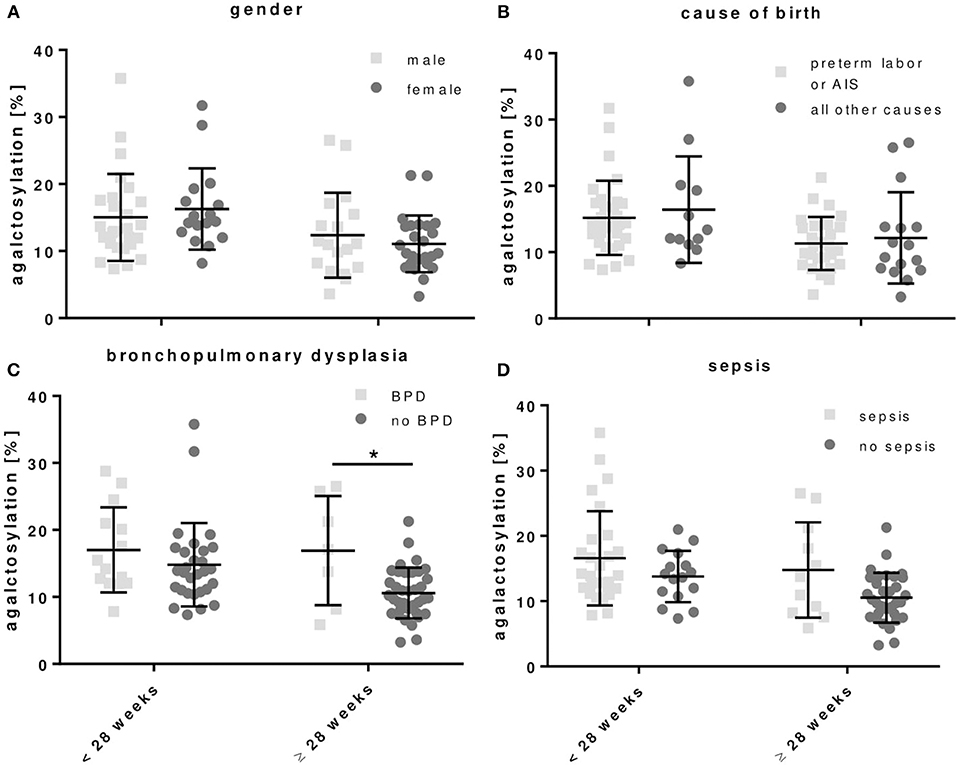 To our knowledge, this is the first explorative study investigating IgG Fc glycosylation patterns in peripheral blood of preterm infants. We noted that IgG Fc glycosylation patterns of preterm infants differ with gestational age whereas the patterns of mothers, as described in the literature (32, 33), did not differ with gestational age of their offspring. Preterm infants born < 28 weeks of gestation displayed an IgG Fc glycosylation pattern characterized by a higher proportion of agalactosylated IgG (reduced proportion of galactosylated IgG) and a reduced proportion of sialylated and bisecting IgG. The pattern of Fc glycosylation from mothers, however, did not differ between the second and third trimester of pregnancy suggesting an enrichment of IgG glyco forms in extremely low gestational age infants. This novel finding needs further prospective in-depth-analysis, how these IgG Fc glyco forms are enriched in the smallest, most vulnerable infants, whether they contribute to or are a result of dysregulated immune responses and sustained inflammation like BPD, and how they function.

Our current understanding of IgG Fc glycosylation patterns and its functional role for the immune system is that different Fc N-linked glycan structures can influence the inflammatory properties of IgG antibodies. Galactosylation and sialylation of total serum IgG but also of antigen-specific IgG in form of immune complexes were shown to mediate more anti-inflammatory effector functions (12, 19, 21–27) whereas a shift toward more agalactosylated and bisecting glycan structures has been associated with pro-inflammatory effects (19, 20, 28). IgG glycosylation of pregnant women in the Fc part was shown to be similar during second and third trimester of pregnancy and directed toward an anti-inflammatory pattern as compared to non-pregnant woman (32, 33). This pattern was also previously found in cord blood samples of term infants (35, 37) and was suggested to contribute to the condition of feto-maternal tolerance and permissive microbiota establishment after birth. In the context of preterm birth, however, the IgG Fc glycosylation patterns are different between infants born during second and third trimester and it is yet unknown whether immune dysregulation derives from a pro-inflammatory setting, i.e., reduced galactosylation and sialylation, or from an anti-inflammatory effect due to reduced bisection leading to lower affinities to activating Fcγ receptors. For this reason, functional studies are needed determining which IgG Fc glycosylation pattern is dominant. We showed that reduced bisection was associated with birth pathology, especially preterm labor and amnion infection syndrome (AIS) suggesting a role of Fc glycosylation patterns for preterm birth. Additionally, we showed a trend of increased IgG Fc agalactosylation in inflammatory-mediated diseases of preterm infants (i.e., chronic lung disease) supporting the hypothesis of a pro-inflammatory effect.

Taken together, our findings suggest an enrichment of certain IgG glyco forms in extremely low gestational age infants and that a high proportion of “pro-inflammatory” agalactosylated IgG Fc N-glycans in those infants might contribute to or result from inflammation-mediated diseases. However, IgG Fc agalactosylation was not significantly associated with the diagnosis of BPD or sepsis in extremely preterm infants, only with the diagnosis of BPD in preterm infants born ≥28 weeks of gestation. Future studies need to evaluate larger cohorts using multivariable linear regression accounting for possible confounding factors. Furthermore, functional in vitro and in vivo studies are needed to reveal consequences for effector functions of IgG glycosylation pattern in term and preterm infants.

The use of peripheral blood from infants in contrast to umbilical cord blood has the advantage not to be contaminated with maternal blood in the context of clinical sampling. Despite the limited sample volumes, we obtained peripheral blood samples of highly vulnerable infants. Our data are hypothesis-generating and add another component to the discussion of intravenous substitution of pooled immunoglobulins (IVIg) to preterm infants. Large trials have shown no benefit (INIS trial) with regard to sepsis risk or neurodevelopmental outcome (47), but to e.g., reduction of the inflammatory cytokine IL-6 (48). However, the role of IgG Fc glycosylation has never been reflected in the context of IVIg treatment in preterm infants and also not in the context of BPD. The effect might be beneficial in sustained inflammation of preterm infants, if the intravenous immunoglobulins would be immunomodulatory with higher proportions of galactosylation and sialylation, since this would simulate more closely the measured IgG glycosylation patterns in term infants and might mediate anti-inflammatory effects in preterm infants.

We are indebted to the patients and their families for their participation and the physicians of the local NICU for their generous collaboration in this study. We thank Matthias Collin for the EndoS. The experimental work of ME's laboratories was supported by the Else-Kröner-Fresenius Foundation (2014_A91) and the German Research Foundation (DFG; EH 221/8-1, /9-1, /10-1, /11-1, Research Training Group (GRK) 1727, Clinical Research Unit (CRU) 303, SFB/TR 654 and Excellence cluster 306 Inflammation at Interfaces).

The Supplementary Material for this article can be found online at: https://www.frontiersin.org/articles/10.3389/fimmu.2018.03166/full#supplementary-material

Copyright © 2019 Twisselmann, Bartsch, Pagel, Wieg, Hartz, Ehlers and Härtel. This is an open-access article distributed under the terms of the Creative Commons Attribution License (CC BY). The use, distribution or reproduction in other forums is permitted, provided the original author(s) and the copyright owner(s) are credited and that the original publication in this journal is cited, in accordance with accepted academic practice. No use, distribution or reproduction is permitted which does not comply with these terms.