The intestinal microbiota is critical for maintenance of gut homeostasis and experimental colitis fails to develop in germfree (GF) mice. The composition of the microbiota regulates diseases of the gastrointestinal (GI) tract; including, celiac and inflammatory bowel diseases (IBD) (1–3). IBD is associated with decreased diversity and dysbiosis of the microbiota and the decreased abundance of Firmicutes and Bacteroides and increased Gammaproteobacteria (4). Th17/Th1 cells that target the normal microbiota contribute to colitis (5). Conversely, FoxP3-expressing CD4+ regulatory T (T reg) cells play a crucial role in suppressing IBD (6, 7). The microbiota determines the types of T cells that are found in the GI tract (8, 9). The presence of segmented filamentous bacteria in a mouse colony is sufficient for the development of robust Th17 cells (8, 9). In addition, Bacteroides and Clostridium species have been found to suppress experimental colitis via the induction of T reg cells (10, 11). Colitis is a result of a T cell response to the microbiota and dysbiosis of the microbiota.

C57BL/6 mice were originally from Jackson Labs (Bar Harbor, MN) and maintained at the Pennsylvania State University (University Park, PA). All mice used were housed within the same rooms in the animal facility. Mice were fed purified diets made in the lab as described that either contained vitamin D (D+) or did not (D–) (24). GF C57BL/6 mice were bred and maintained at the Pennsylvania State University gnotobiotic animal research facility. For some experiments, 1,25D was started in the diets of 3–5 week old mice (25 ng/d until 5 weeks of age) and mice that were >5 weeks old were fed 50 ng/d 1,25D exactly as described (24). For microbial transplantation experiments (two independent experiments), the 4 week old GF mice were gavaged with 100 μl/10 μg cecal contents from D+ or D– mice, and used for experiments after 2 weeks (25). All of the experimental procedures were approved by the Institutional Animal Care and Use Committee at the Pennsylvania State University.

The bacterial DNA in the cecal contents was extracted using the E.Z.N.A stool DNA isolation kit (OMEGA Bio-tek, Norcross, GA) according to the manufacturer's instructions. A 100 μl aliquot of the isolated bacterial DNA was created with a bacterial DNA concentration of 10 ng/μl. PCR was completed as previously described (27). Bacteria were then analyzed by qPCR using primers targeted at 16S ribosomal RNA gene (28, 29). Primers for all of the species in the Clostridium clusters XIVa, IV, and XVIII were used and listed in Supplementary Table 1 (28, 29). qPCR assays were carried out using SYBR Green qPCR Master Mix on a StepOnePlus real-time PCR system (Thermo Fisher Scientific, Waltham, MA) (30). The results were normalized to 16S ribosomal (universal) DNA sequences and expressed as the relative difference compared to D+ control group using the ΔΔCT method.

16S rRNA sequencing was performed using the Illumina MiSeq platform by the Pennsylvania State University Genomics Core Facility. Data analysis was done using mothur and aligned with the SILVA databases as described previously (27, 30–32). The raw data can be accessed on the National Center for Biotechnology Information (NCBI) with the accession number PRJNA506977.

Mice were administered DSS (MP Biomedicals, Solon OH) for 5 days, after which mice were given regular drinking water. Animals were weighed daily, and monitored for rectal bleeding, diarrhea, and signs of morbidity. Because of differences in initial starting weights (Figure 7) the females received 3.5% DSS and the males received 4% DSS. Based on their identical initial starting weights the male and female GF recipients of the D+ or D– microbial transplants received 3.5% DSS (Figure 8). Diarrhea was scored based on a scoring system as described (33). Briefly: 0- firm normal stool, 2- semi-formed stool, and 4- liquid stool that adhere to the anal region (33). The entire colon from cecum to anus was removed and the length was measured and reported as colon length. Distal colon was fixed in 10% formalin, sectioned, and stained with hematoxylin and eosin (Pennsylvania State University Animal Diagnostic Laboratory). Histological analysis for severity of inflammation, injury, and crypt damage was performed blinded by two independent investigators as described previously (13, 15, 34). Inflammation was scored from 0–3 (0 = none, 1 = slight, 2 = moderate, 3 = severe). Injury was scored from 0–3 (0 = none, 1 = mucosal, 2 = mucosal and submucosal, 3 = transmural). Crypt damage was scored for 0–4 (0 = none, 1 = basal 1/3 damaged, 2 = basal 2/3 damaged, 3 = only surface epithelium intact, 4 = entire crypt and epithelium lost). Each score was added to obtain a total histology score where the maximum score was 10.

Mice with defects in vitamin D metabolism or without the VDR develop dysbiosis of the microbiota, which was associated with alterations in mucosal immune function (15, 35). Here we determined the effect of changes in vitamin D on the microbially dependent colonic T reg cells. There were no significant differences in the total cells isolated from D+ and D– colon (Supplementary Figure 1A). The frequencies of αβ T cells, CD4+ and CD8+ cells were not different in D+ and D– colon LP (Supplementary Figure 1B). The D– mice had significantly fewer ILC3 cells, and reduced IL-22 compared to D+ mice [Supplementary Figure 1B; (36)]. In addition, the Th17 cells from the D– colon were unable to expand after gastrointestinal infection (36). The frequency and numbers of T reg cells in the D+ colon were significantly higher than in D– mice (Figure 1A). Most of the T reg cells in the D+ colon were RORγt/FoxP3+ (80% of the FoxP3+ cells, Figure 1B), the remainder of the T reg cells either co-expressed GATA3 or singly express FoxP3 (10% each, Figure 1B). D+ mice had significantly more RORγt/FoxP3+ T reg cells than D– mice (Figure 1B). The frequency of GATA3/FoxP3+ T reg cells was lower in D+ than D– colon (Figure 1C). However, there were no differences in the total cell numbers of GATA3/FoxP3+ T cells in the D+ and D– colons (Figure 1C). The colon of D– mice had fewer T reg cells and in particular fewer of the RORγt/FoxP3+ T reg cells in the colon than D+ mice. 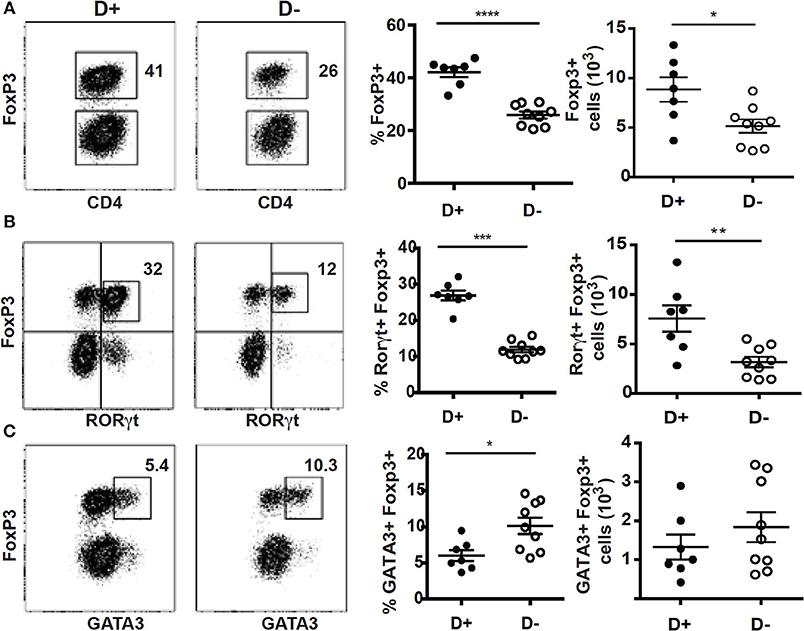 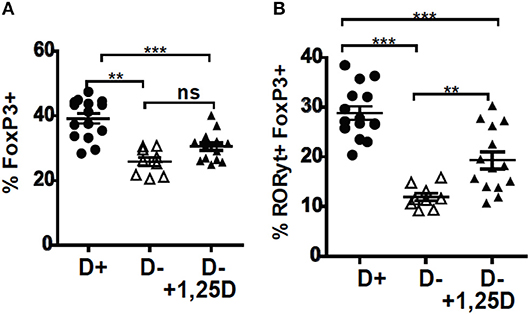 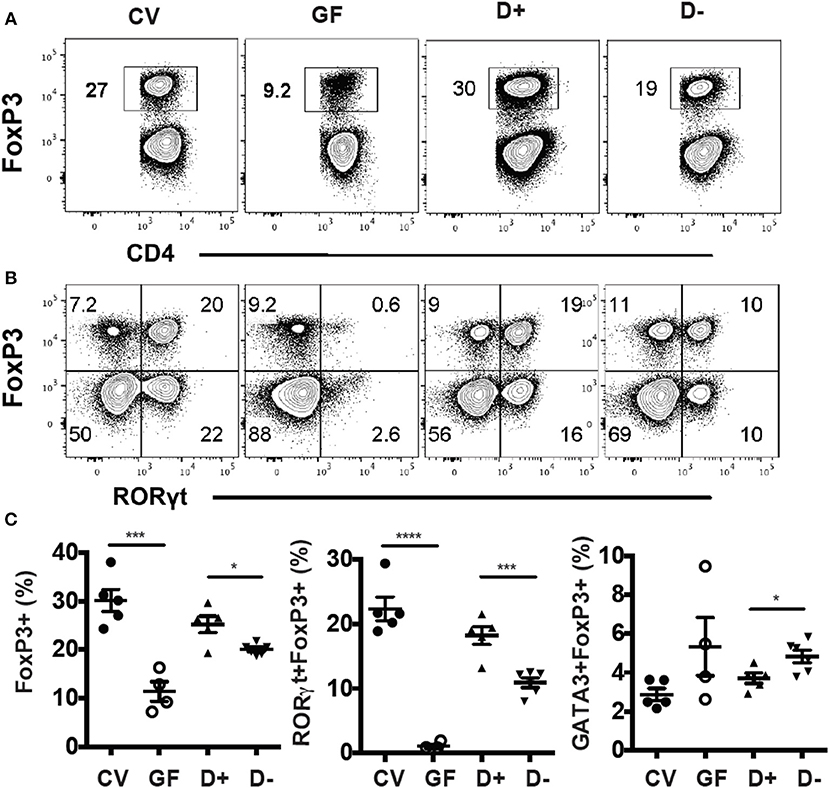 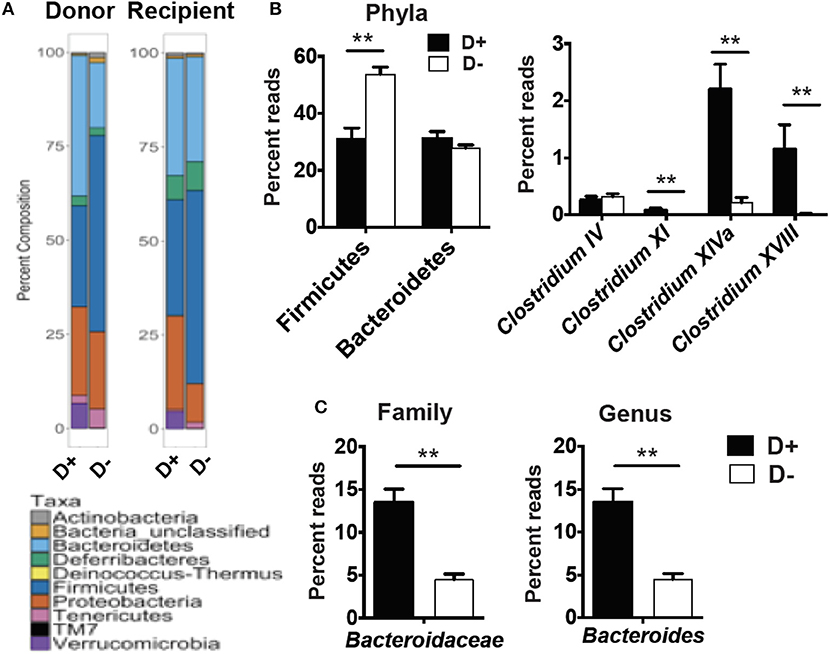 Figure 4. Microbial differences in the recipients of D+ and D– microbes. 16S rRNA gene sequencing analysis of GF recipients of D+ and D– cecal transplants. (A) Percent composition of the total reads for each phyla in the donor and recipients of one representative of two independent experiments with n = 2 donors/group and n = 5–6 recipients/group. (B) Reads for Phyla, and Clostridium cluster IV, XI, XIVa, and XVIII or (C) Bacteroidaceae, and Bacteroides in cecum of D+ and D– recipients. Values are the mean ± SEM of n = 5–6 mice per group. Significance was determined using Mann-Whitney tests. **P < 0.01. 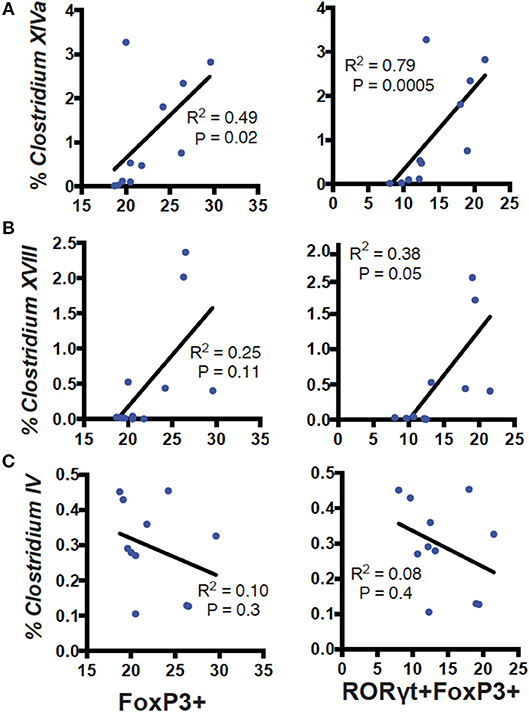 Figure 5. Correlation of Clostridium clusters with colonic T reg cells. Percent reads of Clostridium (A) XIVa, (B) XVIII, (C) IV vs. FoxP3+ (left) or RORγt/FoxP3+ (right) T reg cells in the colon of D+ and D– GF recipient mice. Values are from 11 individual mice. Spearman correlation was used to calculate the P values. 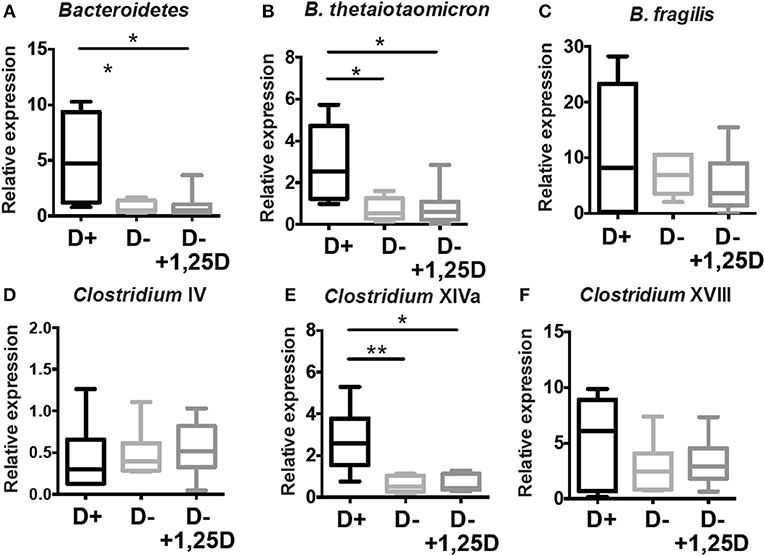 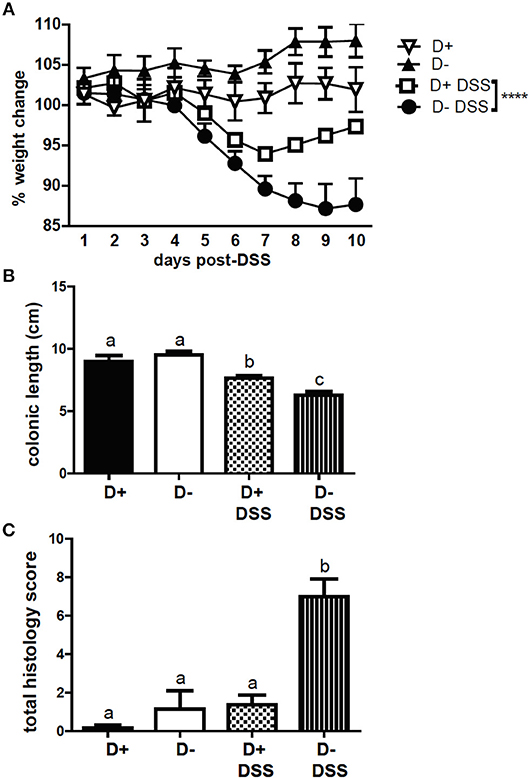 Figure 7. D+ mice are less susceptible to DSS colitis than D– mice. (A) Percent weight change, (B) colon length, and (C) total histopathology scores of untreated (n = 3) and DSS treated (n = 5–6) D+ and D– mice. Values are the mean ± SEM of n = 3–6 mice per group. Two-way ANOVA with Bonferroni's post-hoc test was used to compare (A) weight change between D+ DSS and D– DSS treated mice over time. ****P < 0.0001. One-way ANOVA with Tukey's multiple comparison was used to assess colitis symptoms (B,C). Groups in (B) and (C) with different letters were significantly different from each other, P < 0.001. 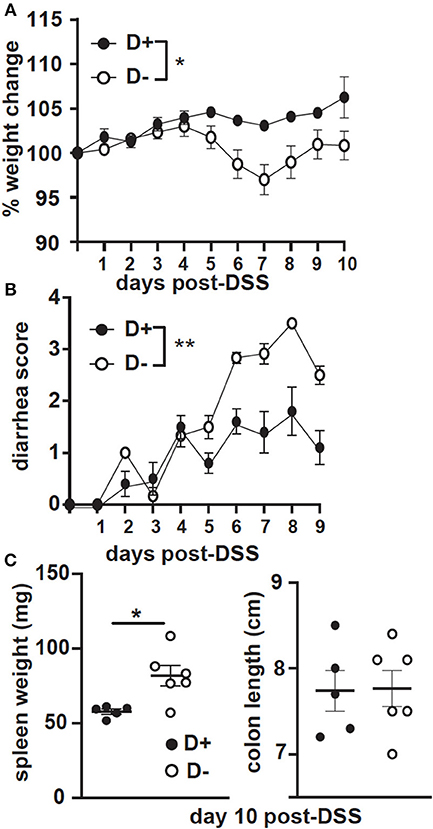 T reg cells in the colon are low just after birth and increase to adult levels at 4 weeks of age (10). The temporal increase in T reg cells in the intestine with weaning and the induction of RORγt+ T reg cells in the colon with microbial colonization of GF mice demonstrates the critical role of microbes in the development of colonic T reg cells (10). The data show that intervention with 1,25D at weaning in D– mice failed to induce the microbial changes needed to increase the colonic RORγt+ T reg cells to D+ levels. Microbial exposure following birth is critical for immune development and alterations in the gut microbiota during development can have negative effects for allergy and other immune mediated diseases later in life (39). Early life colonization (before 5 weeks of age) with diverse microbes is important for the regulation of IgE; demonstrating a critical window of microbial regulation of immune cells during development (40). Like GF mice, VDR KO and D– mice have hyper IgE (41). The D– mice and GF recipients of D– microbiota that lacked RORγt+ T reg cells, B.thetaiotaomicron and the Clostridium cluster XIVa, developed more severe colitis following DSS than D+ mice or GF recipients of D+ microbiota. Others have shown that mice with reduced or absent RORγt+ T reg cells develop more severe colitis (22, 23). Vitamin D and the microbiota are both environmental factors interacting to affect immune development and the risk for immune mediated disease.

Bacteria do not express the VDR and therefore direct regulation of the microbiota by vitamin D seems unlikely. 1,25D treatments in vivo have been shown to induce peripheral T reg cells (19). The direct effects of vitamin D in the colon include regulation of immunity, barrier function, and/or the production of anti-microbial peptides (5). Vitamin D regulates innate immune responses via TLR and pattern recognition receptors (42). ILC3 cells were completely recovered in the 1,25D treated D– colon (36). ILC3 production of IL-22 depends on vitamin D in the colon and IL-22 induces antibacterial peptide production by epithelial cells (36). NOD2 a pattern recognition protein linked to the development of IBD is a vitamin D target (47). TNF-α, IL-17, and IFN-γ were all reduced in D+ as compared to D– or VDR KO mice (5, 48). Vitamin D regulates gut inflammation and the vitamin D alterations in mucosal immunity underlies the vitamin D effects on the microbial community structure.

The datasets generated for this study can be found in the National Center for Biotechnology Information (NCBI) the accession number PRJNA506977.

The animal study was reviewed and approved by Institutional Animal Care and Use Committee at the Pennsylvania State University.

We thank Veronika Weaver for her diligent work managing the mouse colony and aiding in tissue processing. We would like to thank Ed Dudley for lively discussions and editing the manuscript.

The Supplementary Material for this article can be found online at: https://www.frontiersin.org/articles/10.3389/fimmu.2019.01772/full#supplementary-material

Copyright © 2019 Cantorna, Lin, Arora, Bora, Tian, Nichols and Patterson. This is an open-access article distributed under the terms of the Creative Commons Attribution License (CC BY). The use, distribution or reproduction in other forums is permitted, provided the original author(s) and the copyright owner(s) are credited and that the original publication in this journal is cited, in accordance with accepted academic practice. No use, distribution or reproduction is permitted which does not comply with these terms.