Females in their reproductive age experience more severe disease following influenza A virus infection than males (1, 2). Hospitalization rates during influenza seasons were reported to be higher in male children and in elderly males. However, during the reproductive age, females are more likely to be hospitalized than males (3). This was further supported and highlighted during the 2009 H1N1 influenza pandemic. Here, females were reported to develop more severe influenza disease compared to males in multiple published datasets (4–6). In line, females were more likely to die upon avian H7N9 or H5N1 influenza A virus infection than males (7, 8). These epidemiological observations could be mimicked in murine infection models (7). Yet, the underlying mechanisms of sex-specific influenza disease outcome are largely unknown. In males, testosterone is the predominant sex hormone (further described as “male sex hormone”), whereas in females the predominant sex hormones are estradiol and progesterone (further described as “female sex hormones”). In a murine influenza infection model, it was shown that the female sex hormones, 17β-estradiol and progesterone, have a protective effect on influenza disease outcome in females (9, 10). In this study, we analyzed the impact of the major male sex hormone testosterone on influenza disease outcome using a pre-clinical murine infection model.

Male and female mice were anesthetized with 2.5% isoflurane mixed with oxygen. For gonadectomy, 6 weeks old male mice were assigned to remain intact or be bilaterally gonadectomized. Six weeks old female mice were subcutaneously implanted an ALZet Model 2004 micro-osmotic pump (Charles River) releasing either a carrier substance for the control group or testosterone [5 mg/ml diluted in 45% w/w (2-Hydroxypropyl)-ß-cyclodextrin]. One hour before and 24 h after surgery mice were administered subcutaneously with carprofen purchased from Zoetis (5 mg/kg) as postoperative analgetic. All infections occurred 2 weeks following the surgeries. Plasma testosterone concentrations were determined by a chemiluminescence immunoassay (ADVIA Centaur Testosterone II assays; Siemens Healthcare Diagnostics) and the measurements were performed with the ADVIA Centaur XP (Siemens Healthcare Diagnostics).

Total RNA from PBMCs was isolated following a guanidinium thiocyanate-phenol-chloroform extraction protocol. The samples were diluted in TRIzol® and treated with chloroform before centrifugation. After phase-separation, the precipitation of RNA was performed using isopropanol following a washing step with 75% Ethanol. The RNA was eluted in RNase-free water. RNA concentration and purity were determined using the Nanodrop 1000 (Peqlab). Total cDNA was generated using random nonamer primers (Gene LinkTM, pd(N)9, 26-4000-06) and the SuperScriptTM III Reverse Transcriptase (Invitrogen) according to the manufacturer’s instructions. For the qPCR, specific primer pairs were used for the genes of interest (GOIs), murine estrogen receptor alpha (ESR1), murine androgen receptor (AR) and for the reference gene murine ribosomal protein 9 (Rsp9). The reactions were set up in MicroAmp® Optical 96-Well Reaction Plates (Invitrogen) including Platinum® SYBR® Green qPCR SuperMix-UDG (ROCHE®), forward and reverse primer and the cDNA template. The RT-qPCRs were conducted on the LightCycler® 96 Real-Time PCR System (ROCHE®) as described previously (12). The relative quantifications were performed using the −2−ΔΔCt method.

The following primer sequences were used for qRT–PCR:

All data were analyzed with the Prism software (GraphPad, 5.03) using Mantel–Cox test or Student’s t-test as indicated in the respective legends. Association between sex hormones and cytokines were determined using linear regression and correlation analysis (Pearson). Statistical significance was defined as p < 0.05 (∗p < 0.05, ∗∗p < 0.01, ∗∗∗p < 0.001).

Influenza A virus pathogenesis may vary depending on sex (2, 7). Here, we studied the impact of testosterone on influenza disease outcome in female and male mice. 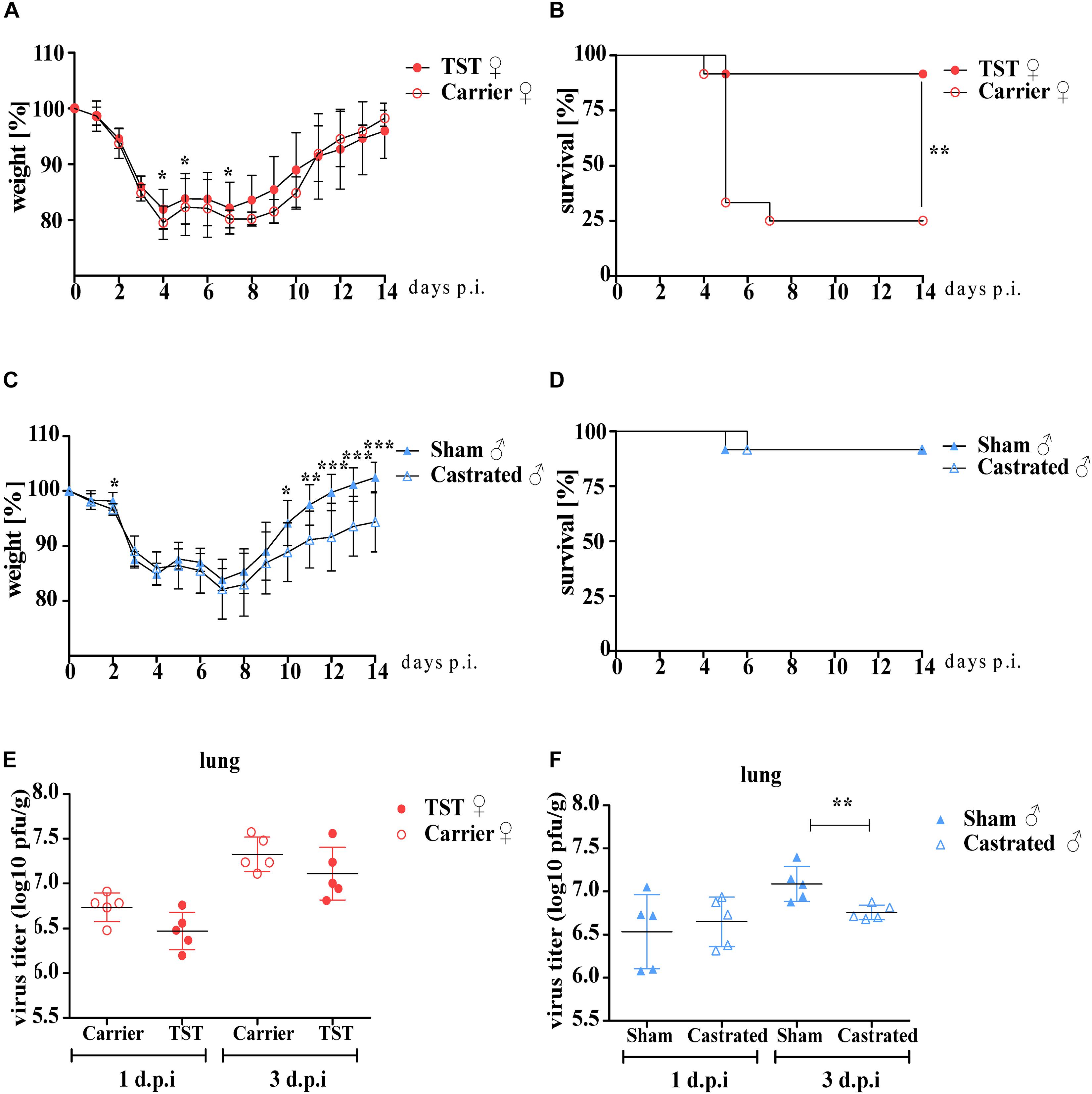 Figure 1. Testosterone impact on 2009 H1N1 influenza A virus pathogenicity in female and male C57BL/6 mice. Male mice (n = 12 each) were gonadectomized or sham-operated. Female mice (n = 12 each) were implanted an osmotic pump releasing either testosterone (TST) or a carrier substance. Female and male mice were intranasally infected with 1 × 104 of the 2009 H1N1 influenza A virus. Weight loss and survival (A–D) were monitored for 14 days. Mean values and SD were determined. Statistical significance was assessed by Mantel–Cox test for the survival data and Student’s t-test for the weight loss data (*p < 0.05, **p < 0.01, ***p < 0.001). Lungs of five animals per group were harvested on days 1 and 3 d.p.i. Viral lung titers were determined by plaque assay (E,F). The individual logarithmic virus titers of each lung and their means are shown. Statistical significance was assessed by Student’s t-test (*p < 0.05).

These findings show that female mice treated with testosterone are protected against lethal 2009 H1N1 influenza. However, improved survival rates do not correlate with reduced virus lung titers suggesting that the underlying mechanism is not primarily dependent on virus replication. Moreover, the protective role of testosterone is not observed in male mice. 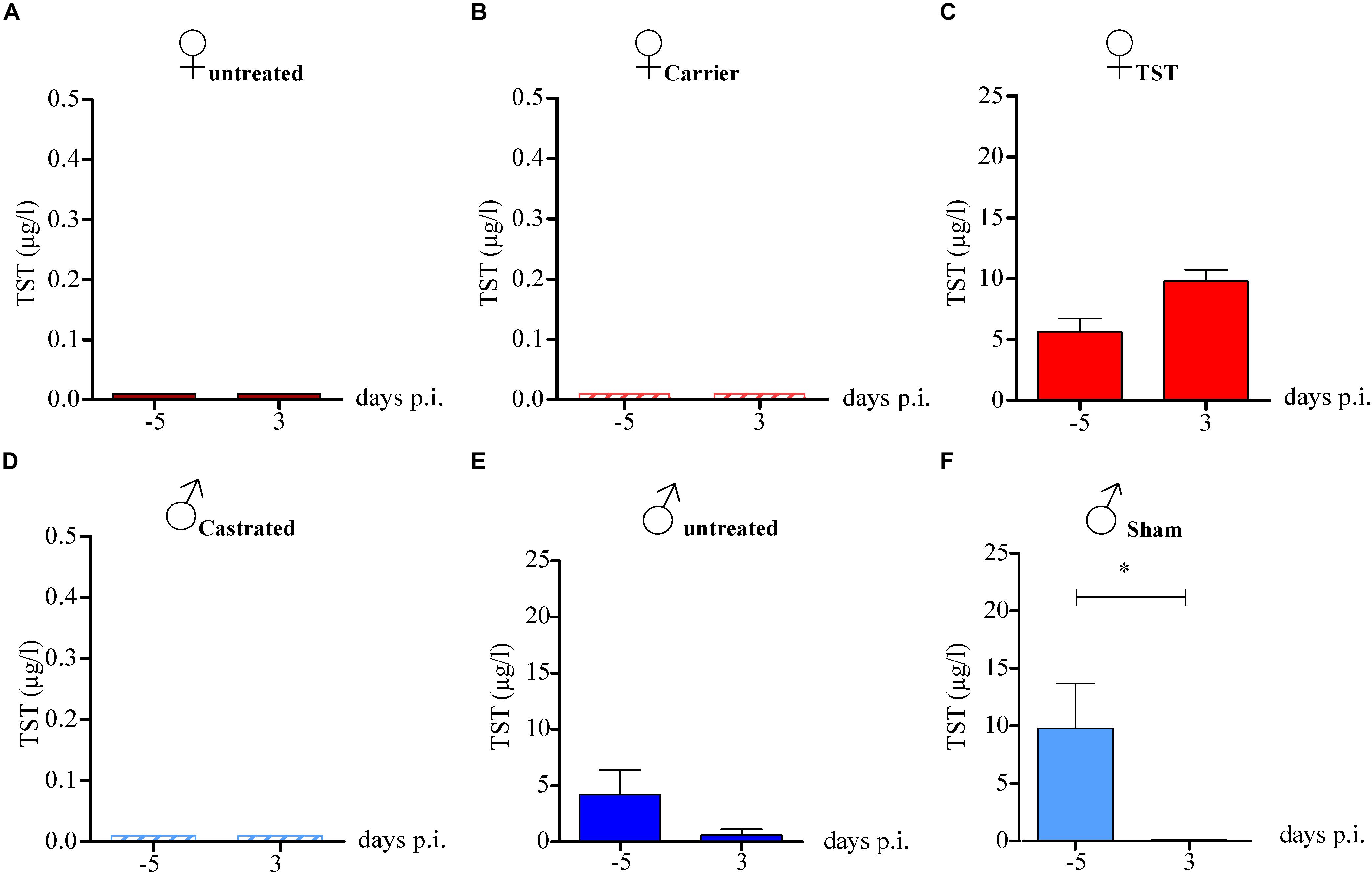 Figure 2. Testosterone levels in 2009 H1N1 influenza A virus infected female and male mice. Non-treated female mice (A), female mice with an implanted osmotic pump releasing either a carrier substance (B) or testosterone (TST) (C) as well as gonadectomized (D) (n = 5 each), non-treated (E) and sham-operated male mice (F) (n = 10 each) were intranasally infected with 1 × 104 of the 2009 H1N1 influenza A virus. Serum testosterone levels were measured on day 5 before infection and day 3 post infection. Statistical significance was assessed by Student’s t-test (*p < 0.05).

These findings show that 2009 H1N1 infection mediates reduced expression of testosterone in male mice. This observation may explain why influenza virus pathogenesis did not differ between castrated and non-castrated males.

Then, we addressed the question whether testosterone might affect pulmonary chemokine and cytokine responses in 2009 H1N1 infected mice thereby affecting disease outcome. As a control, cytokine and chemokine levels of PBS-treated mice were defined as background references and compared individually to the respective treated groups. Upon 2009 H1N1 infection, IL-1β, IL-6, and MCP-1 level were increased in all animals compared to their respective background references unlike IL-10, IL-17A, and TNF-α levels (Figures 3A–F). Testosterone treated female mice showed significantly decreased IL-1β levels compared to carrier substance treated females (Figure 3A). IL-6 level were slightly decreased in testosterone treated females and in castrated males (Figure 3D). However, cytokine and chemokine levels were not significantly altered in the respective male groups in line with similar disease outcomes. 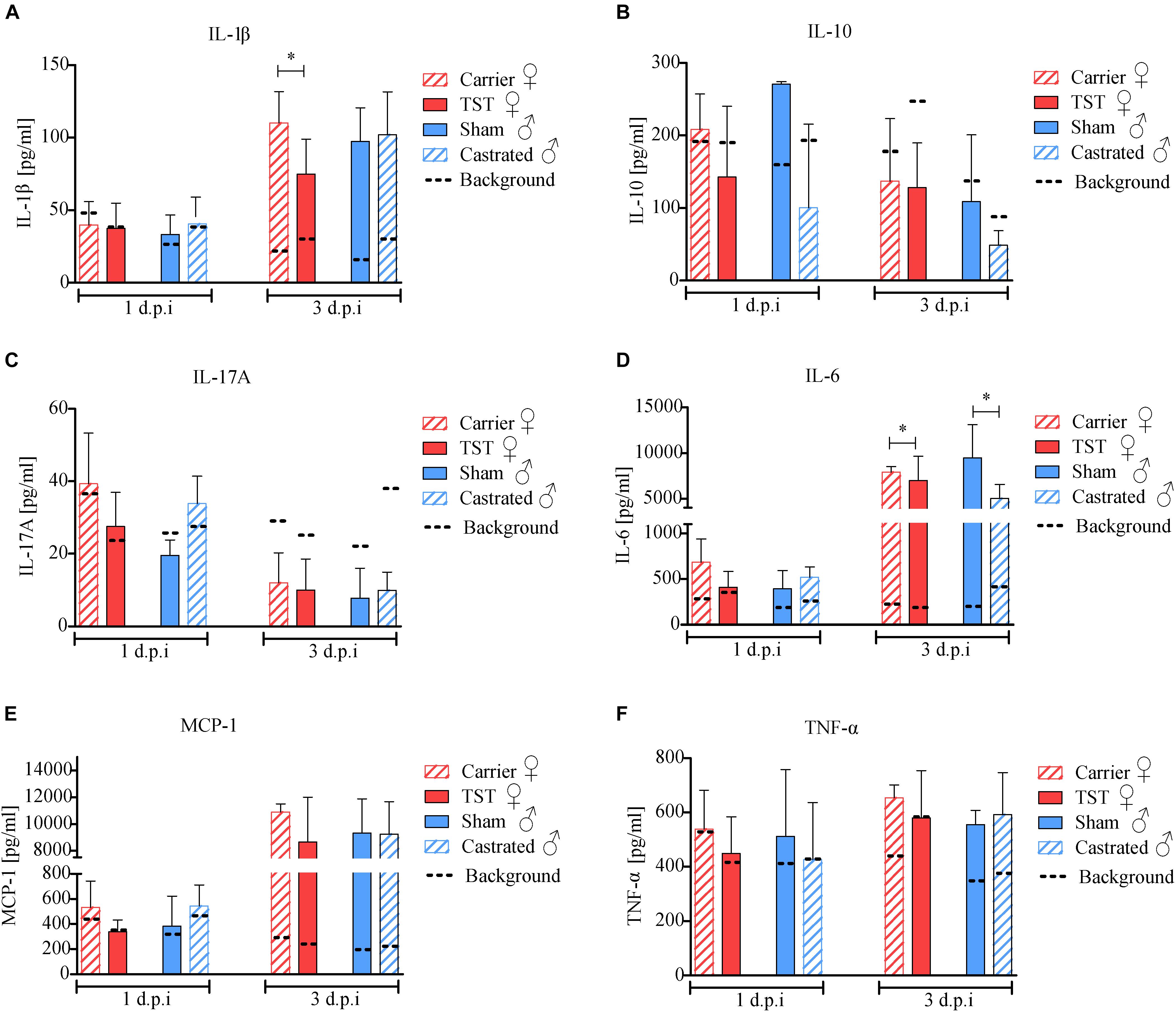 Figure 3. Testosterone impact on chemokine and cytokine responses in 2009 H1N1 influenza A virus infected female and male C57BL/6 mice. Gonadectomized or sham-operated male mice (n = 5 each) and female mice with an implanted osmotic pump releasing either testosterone (TST) or a carrier substance (n = 5 each) were intranasally infected with 1 × 104 of the 2009 H1N1 influenza A virus or PBS. Lungs of five animals per group were harvested on days 1 and 3 d.p.i. Cytokines IL-1β (A), IL-10 (B), IL-17A (C), IL-6 (D), MCP-1 (E), TNF-α (F) were determined in lung homogenate supernatants (n = 5) by a procartaplex cytokine multiplex assay. The individual mean values of the PBS control animals are indicated as dotted lines. Statistical significance was assessed by Student’s t-test (*p < 0.05). 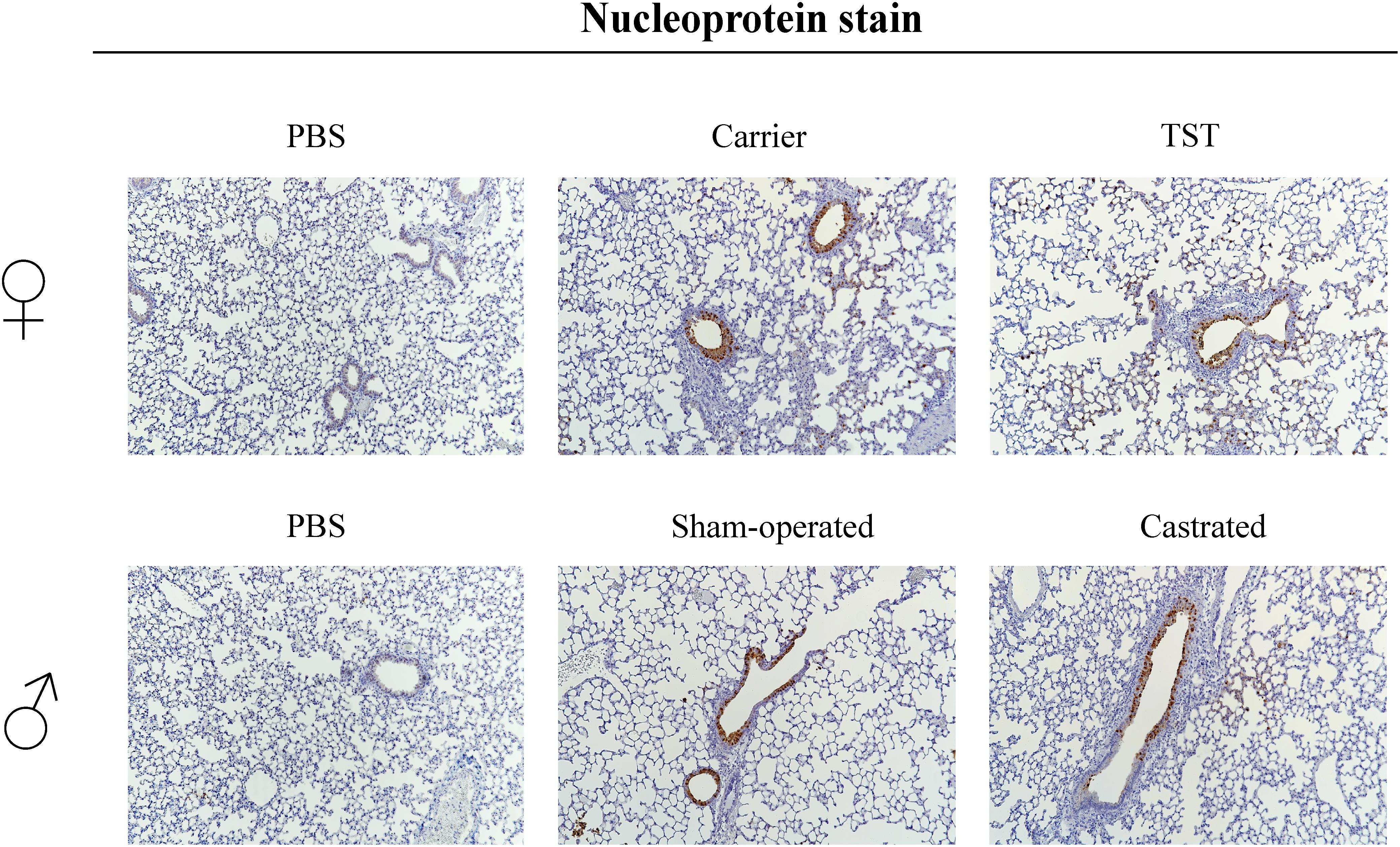 In this study, we sought evidence for the epidemiological observation why men undergo less severe influenza than women. These clinical findings can be mimicked in murine infection models as shown earlier allowing now causal assessments (1, 7). In this study, we provide evidence that testosterone has a protective role in 2009 H1N1 disease outcome in females. Testosterone is known to have an anti-inflammatory impact (13), whereas estrogens promote inflammation (14, 15). Severe inflammation is associated with cytokine storm leading to severe influenza (16). However, this protective impact of testosterone is not observed in male mice. Detailed analysis of testosterone expression kinetics in male mice revealed that 2009 H1N1 influenza virus infection reduces testosterone expression levels in male mice. This phenomenon is not expressed in female mice likely due the generally low testosterone levels in females. Others have reported a decline of testosterone levels in young and elderly male mice before (10). However, the underlying mechanism how influenza A virus infection might dysregulate testosterone expression is unknown. It was reported before that cytokines might interfere with testosterone synthesis, albeit the detailed mechanism is still unclear (17). In this study, we further analyzed androgen and receptor expression levels to identify the potential target pathways. However, influenza A virus infection did not significantly alter androgen or ESR1 levels, respectively (Supplementary Figure S2). Thus, future studies are required to understand the viral interference with testosterone expression. However, we could identify that testosterone treatment of female mice improves virus induced lung damage without affecting respiratory virus replication kinetics. Improved disease outcome in influenza virus infected female mice upon testosterone treatment strongly correlated with reduced pro-inflammatory IL-1β cytokine levels in the lungs and high survival rates. IL-1β plays a key role in influenza virus mediated lung pathologies (18). Interestingly, it was shown before that aged male mice treated with testosterone had reduced pulmonary IL-1β levels compared to aged male mice with low testosterone levels after infection (19). Therefore, a potential correlation between testosterone and IL-1β serum level in female mice after infection has been analyzed (Supplementary Figure S3). The results indicate a trend for a negative correlation between testosterone levels and IL-1β levels. In summary, our data show that testosterone treatment of females significantly improves influenza disease outcome by dampening IL-1β responses and reducing virus induced lung damage. These findings highlight potential sex differences should be taken into consideration in developing new antiviral strategies against pandemic influenza.

The Heinrich Pette Institute, Leibniz Institute for Experimental Virology, was supported by the Free and Hanseatic City of Hamburg and the Federal Ministry of Health. This study was also supported by the Landesforschungsförderung Hamburg (Z-AN LF).

We would like to thank Hanna Jania, Zacharias Müller, Gundula Pilnitz-Stolze, and Sandra Röse for the excellent technical contribution.

The Supplementary Material for this article can be found online at: https://www.frontiersin.org/articles/10.3389/fimmu.2020.00697/full#supplementary-material

Copyright © 2020 Tuku, Stanelle-Bertram, Sellau, Beck, Bai, Kouassi, Preuß, Hoenow, Renné, Lotter and Gabriel. This is an open-access article distributed under the terms of the Creative Commons Attribution License (CC BY). The use, distribution or reproduction in other forums is permitted, provided the original author(s) and the copyright owner(s) are credited and that the original publication in this journal is cited, in accordance with accepted academic practice. No use, distribution or reproduction is permitted which does not comply with these terms.

Effects of Androgens on Immunity to Self and Foreign