Recently, a novel disorder coined VEXAS (vacuoles, E1 enzyme, X-linked, autoinflammatory, somatic) syndrome was identified in patients with adult-onset inflammatory syndromes, often accompanied by myelodysplastic syndrome1. All patients had myeloid lineage-restricted somatic mutations in UBA1 affecting the Met41 residue of the protein and resulting in decreased cellular ubiquitylation activity and hyperinflammation. We here describe the clinical disease course of two VEXAS syndrome patients with somatic UBA1 mutations of which one with a mild phenotype characterized by recurrent rash and symmetric polyarthritis, and another who was initially diagnosed with idiopathic multicentric Castleman disease and developed macrophage activation syndrome as a complication of the VEXAS syndrome. The latter patients was treated with anti-IL6 therapy (siltuximab) leading to a resolution of systemic symptoms and reduction of transfusion requirements.

We describe the clinical disease course of two VEXAS syndrome patients (P1 and P2) with two different myeloid lineage-restricted somatic UBA1 mutations (Figure 1A). One of these patients was initially diagnosed with idiopathic multicentric Castleman disease (iMCD) and was ultimately treated with siltuximab, a registered IL-6 antagonist. 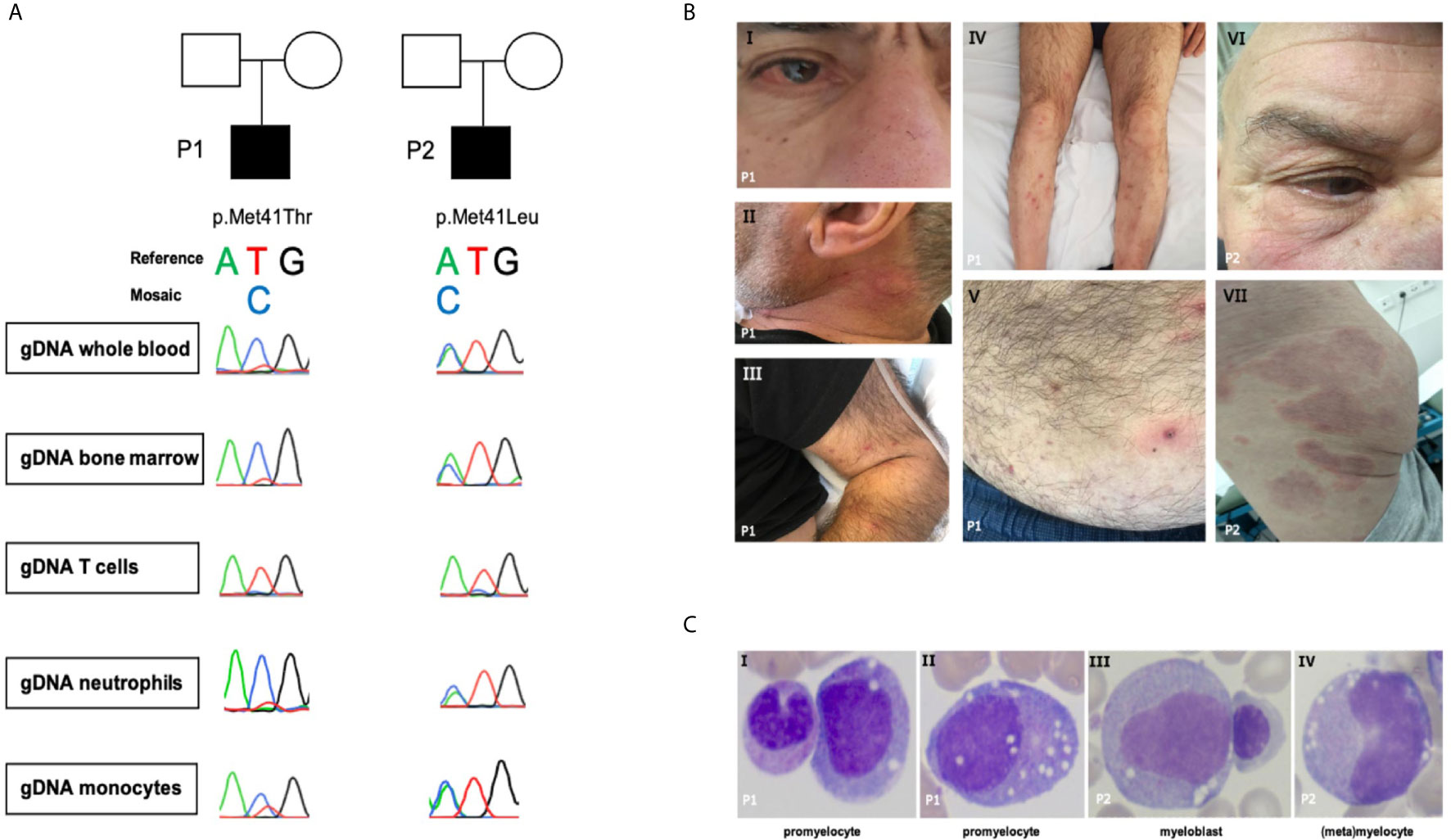 Patient 1 (Figure 1A and Table 1) is a 69-year-old male with a medical history of an abdominal hernia for which he had surgery. He presented with 15 kg weight loss over one year, fever up to 38.2° Celsius, night sweats and fatigue since one month, bilateral cervical lymphadenopathy, arthralgia, episcleritis, nose chondritis, thrombophlebitis and nodular lesions (Figure 1B.I-V). Laboratory examination showed normocytic anemia (Hb 6.6g/dL, MCV 96fL; reference range 76-96fL), absolute neutrophil count 2.2 x 109/L, thrombocytopenia 46 x 109/L and raised inflammatory markers (CRP 93.1mg/L, normal <5mg/L; ferritin 720µg/L, reference range 30-400µg/L). Cervical lymph node excision biopsy was suggestive of human herpes virus (HHV-)8-negative plasma cell type iMCD and additionally showed hemophagocytosis, while skin nodule biopsy demonstrated subendothelial complement depositions consistent with vasculopathy. Bone marrow examination at diagnosis (Figure 1C and Table 1) showed trilineage dysplasia with vacuolization and hemophagocytosis (CD68+). Reticulin staining was mildly positive indicating the presence of myelofibrosis (MF grade 1 according to the WHO 2016 classification criteria). Six out of eight hemophagocytic lymphohistiocytosis (HLH)-2004 criteria were fulfilled confirming the diagnosis of HLH. As siltuximab is not reimbursed in Belgium, the patient was treated for iMCD with prednisolone 40 mg and 2 infusions of rituximab (1000 mg) with a time interval of 2 weeks. As corticosteroids could not be tapered and the patient remained transfusion dependent, sirolimus was initiated in second line with good results. However, the patient relapsed quickly after cessation of sirolimus because of toxic concentrations and opportunistic infections. He developed confusion, dyspnea, high grade fever >40°Celsius, complement-mediated vasculopathy with skin ulcerations, anemia (Hb 6.3g/dL, severe thrombocytopenia 3 x 109/L with bleeding complications, and ferritin levels of 3640µg/L (partly due to >28 units red blood cell transfusions). The patient was started on siltuximab (in medical need) and prednisolone 10 mg/day in third line. This resulted in resolution of fever, skin lesions, and normalization of inflammatory markers. From hindsight, serum IL-6 was significantly elevated (102pg/mL, healthy controls <9.5pg/mL, n = 6) prior to siltuximab treatment. Although the patient became less transfusion dependent, his platelets and hemoglobin levels only partially recovered following 2 months of treatment. 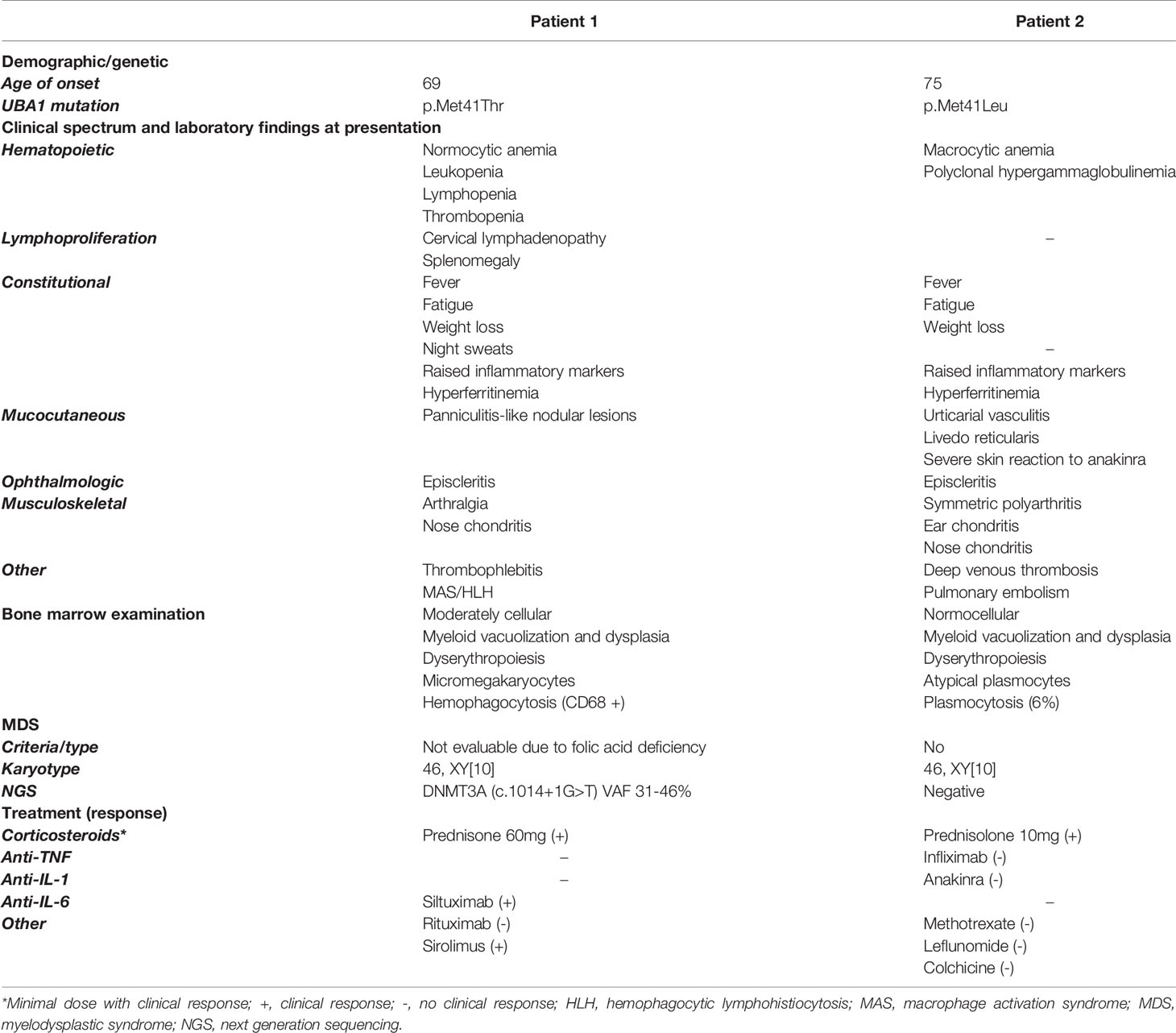 Table 1 Summary of the demographics, genetic and clinical characteristics, bone marrow examination, and treatment response of the VEXAS patients.

Patient 2 (Figure 1A and Table 1) is a 76-year-old male. His medical history is significant for deep venous thrombosis with pulmonary embolism and type B aortic dissection. He presented with a recurrent rash and a symmetric polyarthritis of both large and small joints (Figure 1B.VI–VII). He had no fever and symptoms were rather mild. Laboratory examination showed macrocytic anemia and raised inflammatory markers (CRP 280.9mg/L; ferritin 1161µg/L). Skin biopsy revealed urticarial vasculitis. Bone marrow examination (Figure 1C and Table 1) showed trilineage dysplasia with myeloid vacuolization and reactive plasmocytosis without evidence of a plasma cell dyscrasia. He was treated with a tapering regimen of corticosteroids, relapsed at a dose of 7.5 mg prednisolone and was subsequently initiated on methotrexate (MTX) 15 mg weekly. Three months later, he developed a bilateral episcleritis for which he received topical indomethacin. Since symptoms were refractory to MTX in combination with prednisolone, anakinra (100 mg daily S.C.) was given for a suspected undifferentiated autoinflammatory syndrome. This resulted in a pronounced, delayed injection site reaction characterized by erythematous infiltrated plaques and subsequent treatment cessation. Considering the inability of tapering the prednisolone below 10 mg daily, anti-TNF-α therapy was initiated. Following the infliximab loading regimen, prednisolone could be reduced to 5 mg daily. Subsequently, the patient developed polyarthritis, a livedoid rash, and polychondritis of the nose and ears, requiring dosage increment to 10 mg prednisolone to remain disease free with subclinical signs of biochemical inflammation.

The two VEXAS patients recently diagnosed within our academic hospital demonstrated a phenotype consistent with the recently described cohort by Beck et al. Both patients had myeloid vacuolization, chondritis and a systemic inflammatory disease state. VEXAS was initially reported to be a highly refractory disease to diverse biologicals (anti-TNF-α, anti-CD20; anti-IL1, anti-IL17 therapy, CTLA4 agonist) only responding to high dose corticosteroids (1). However a recent report on the therapeutic options in VEXAS patients, evaluating the time to next treatment as an objective marker, suggested promising results for the use of JAK inhibitors (ruxolitinib or tofacitinib) in 3 VEXAS patients. One patient under JAK inhibition had markedly regression of cutaneous lesions without increment of corticosteroid dose (2). In neither of the treated patients, an improvement was seen in cytopenia and bone marrow myelodysplastic features. In patient 2, we observed a severe skin reaction to anakinra, which was more pronounced than expected. Severe skin reactions to anakinra were reported by Beck et al. in 62% of patients and may potentially provide a diagnostic clue. Interestingly, patient P1 with relapsing complement-mediated vasculopathy, who responded only to high dose corticosteroid treatment and sirolimus, benefited from siltuximab associated to low dose prednisolone with complete resolution of his inflammatory disease state. After genetic testing revealed VEXAS syndrome, the tentative diagnosis of Castleman disease was reconsidered.

Macrophage activation syndrome (MAS), a form of HLH, is a well-known complication of autoinflammatory disorders (3). MAS in the context of an autoinflammatory condition requires treatment of the underlying disorder, which is challenging in the therapy-refractory VEXAS syndrome (3). The VEXAS syndrome-related inflammatory manifestations in P1 resolved completely following siltuximab treatment. In addition, HLH-criteria were no longer met. This is in contrast with the findings by Beck et al., who reported a lack of response to tocilizumab treatment. Bourbon et al. on the other hand observed some responses to tocilizumab as well as azacytidine, cyclosporine, and JAK inhibitors (2). Siltuximab binds IL-6 itself rather than its receptor as is the case with tocilizumab. Similar unexpected disparities in response were reported previously for infliximab, an anti-TNF-α antibody vs. etanercept, targeting TNF-α as a decoy receptor (4).

In conclusion, the clinical spectrum of somatic UBA1 mutations may vary from a relatively easily low-dose prednisolone-treated VEXAS syndrome to a life-threatening MAS. We extend on the spectrum of cutaneous and hematologic manifestations associated with VEXAS syndrome. Finally, based on our observations, treatment of VEXAS syndrome with siltuximab warrants further evaluation in the absence of evidence-based recommendations. Corroborating the clinical response with additional cytokine measurements before and during treatment could further identify key cytokines and delineate potential targets (1). In line, the pathophysiology of anakinra-induced adverse reactions in VEXAS remains elusive and might benefit from additional cytokine analysis.

The studies involving human participants were reviewed and approved by the ethics committee of University Hospitals Leuven. The patients/participants provided their written informed consent to participate in this study. Written informed consent was obtained from the individual(s), and minor(s)’ legal guardian/next of kin, for the publication of any potentially identifiable images or data included in this article.

FS, AlB, SW-A-J, SV, and RS contributed to conception and design of the study. FS and MW performed the experiments for genetic validation and cytokin measurements. SW-A-J and NB performed histopathological evaluation of the bone marrow specimens. AlB, FS, and SW-A-J wrote the first draft of the manuscript. All authors contributed to the article and approved the submitted version.

The Supplementary Material for this article can be found online at: https://www.frontiersin.org/articles/10.3389/fimmu.2021.678927/full#supplementary-material

Copyright © 2021 Staels, Betrains, Woei-A-Jin, Boeckx, Beckers, Bervoets, Willemsen, Neerinckx, Humblet-Baron, Blockmans, Vanderschueren and Schrijvers. This is an open-access article distributed under the terms of the Creative Commons Attribution License (CC BY). The use, distribution or reproduction in other forums is permitted, provided the original author(s) and the copyright owner(s) are credited and that the original publication in this journal is cited, in accordance with accepted academic practice. No use, distribution or reproduction is permitted which does not comply with these terms.