Objective: This single-center study was conducted in a cohort of patients with anti-LGI1 encephalitis to investigate the factors related to their functional recovery.

Methods: We retrospectively collected the clinical information of patients admitted to Xuanwu Hospital from January 2014 until December 2019, and followed up for at least 12 months.

Results: A total of 67 patients were included, and 57 completed the 12-month follow-up. Most of the patients (55/57, 96.5%) achieved functional improvement after immunotherapy, and 26 (45.6%) became symptom-free. Compared to patients with complete recovery, patients with partial or no recovery had significantly higher incidences of consciousness disorders (25.8% vs. 0%, P<0.05) and positive LGI1 antibodies in cerebrospinal fluid (CSF) (71.0% vs. 46.2%, P<0.05). These patients also had a lower Barthel Index both upon admission and at discharge, as well as a higher incidence of relapse (25.8% vs. 3.8%; P<0.05 each). Univariate logistic regression showed that positive LGI1 antibodies in CSF and relapse were associated with incomplete recovery at 1-year follow-up (both P<0.05), but only relapse remained statistically significant after multivariate logistic regression (P=0.034).

Conclusion: Patients with LGI1 antibodies in CSF and those who relapsed were more likely to experience worse outcome. Early recognition of these patients, combined with more aggressive immunotherapy may result in better recovery.

Anti-LGI1 (leucine-rich glioma-inactivated 1) encephalitis is a newly discovered autoimmune encephalitis and a relatively common cause of limbic encephalitis (1). Recent publications reported the key symptoms of anti-LGI1 encephalitis patients, including subacute cognitive decline and seizures (particularly faciobrachial dystonic seizures), as well as a good response to immunotherapy (1–5). Long-term outcome has been described in some studies (2–5), but little is known about the potential risk factors of unfavorable outcome or relapse. This study aimed to explore these factors.

We retrospectively identified patients with definite anti-LGI1 encephalitis admitted to the Department of Neurology of Xuanwu Hospital, Capital Medical University, between January 2014 and December 2019 (Supplemental Figure 1). The diagnosis was made when the patient met all of the following criteria: 1) presence of clinical symptoms involving the limbic system (subacute onset of working memory deficits, seizures, or psychiatric symptoms); 2) abnormalities of the medial temporal lobes on T2-weighted fluid-attenuated inversion recovery (T2-FLAIR) magnetic resonance imaging (MRI), or CSF pleocytosis, or electroencephalogram (EEG) with epileptic or slow-wave activity involving the temporal lobes; 3) detection of anti-LGI1 antibody in serum and/or cerebrospinal fluid (CSF); 4) exclusion of alternative causes (6).

The LGI1 antibodies in both serum and CSF were detected using indirect immunofluorescence test (IIFT) kits with transfected cells (EUROIMMUN, Lübeck, Germany, Cat.No. FA 112d-1005-13) following the manufacturer’s instructions. Briefly, the slides were incubated with serum samples starting from a dilution of 1:10 while CSF samples undiluted. The positivity of anti-LGI1 antibody was defined as antibody titer semiquantitatively using serial dilution of serum and CSF samples, with the titer being the last dilution that showed visible reactivity.

Clinical information was obtained from medical records or by interviewing patients and their relatives on site or by telephone. Patients were followed up for at least 12 months after discharge. The Barthel Index was used to assess the patients’ abilities of daily living both upon admission and at discharge, with 0 being full assistance needed and 100 being totally independent (Supplemental Table 1). The modified Ranking Scale (mRS) was used to evaluate functional outcome, with 0 considered as complete recovery and 6 as death (Supplemental Table 2). Relapse was defined as clinical worsening during treatment after initial improvement that required a change of medication, or clinical worsening observed after recovery and being off-medication.

This study was approved by the Ethics Committee of Xuanwu Hospital, Capital Medical University (No. 2020-059) and complied with the Declaration of Helsinki. Informed consents were obtained from patients or their relatives.

Any data not published within the article are available and will be shared upon reasonable request from any qualified investigator. 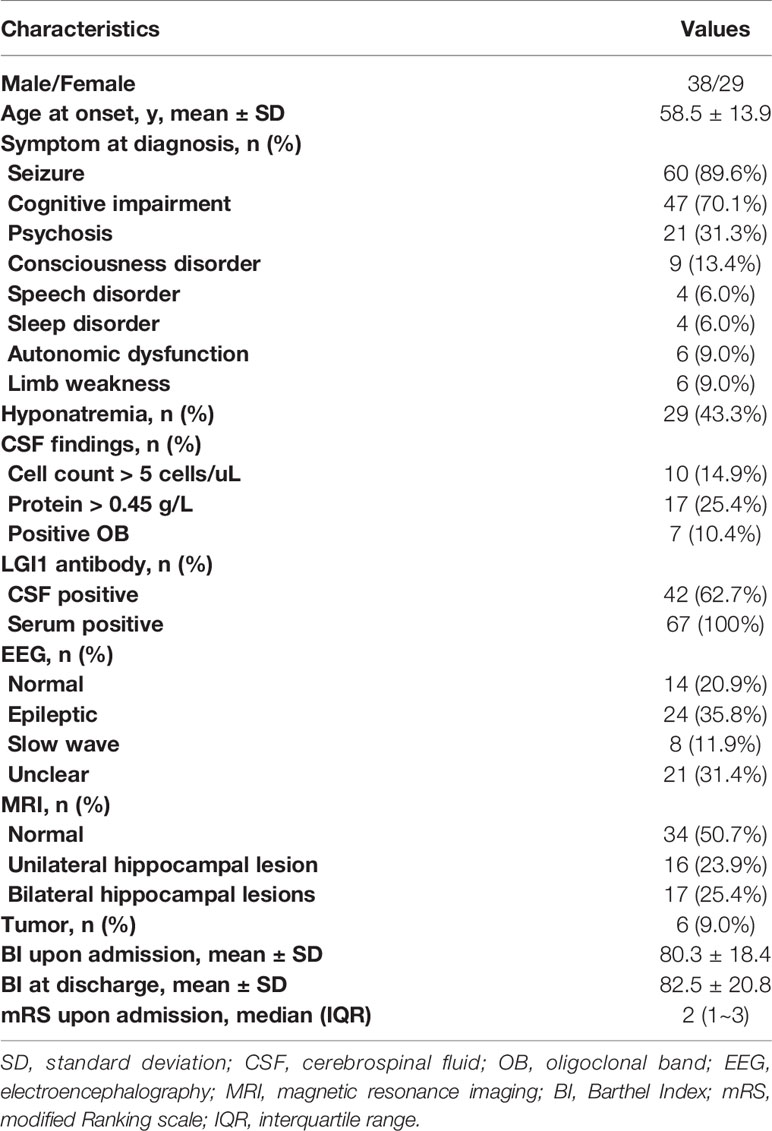 Fifty-seven patients completed the 12-month follow-up. Their mRS decreased to a median of 1 (IQR: 0~1) at 12 months (Figure 3). Most of the patients (55/57, 96.5%) achieved functional improvement after treatment; 26 (45.6%) patients became symptom-free. The most common residual symptoms were cognitive impairment (51.9%), followed by epileptic seizures (22.2%) and personality changes (21.6%, particularly irritability). 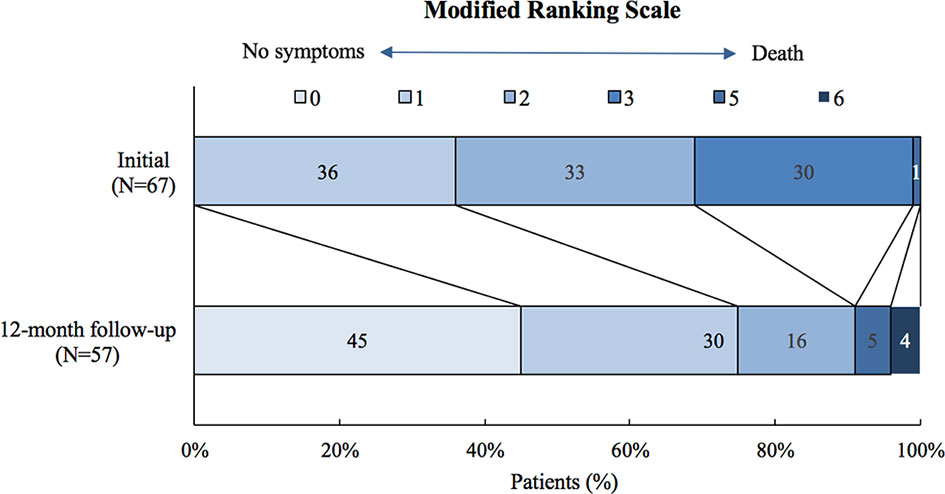 Figure 3 Modified ranking scale (mRS) of patients with anti-LGI1encephalitis at the 12-month follow-up. 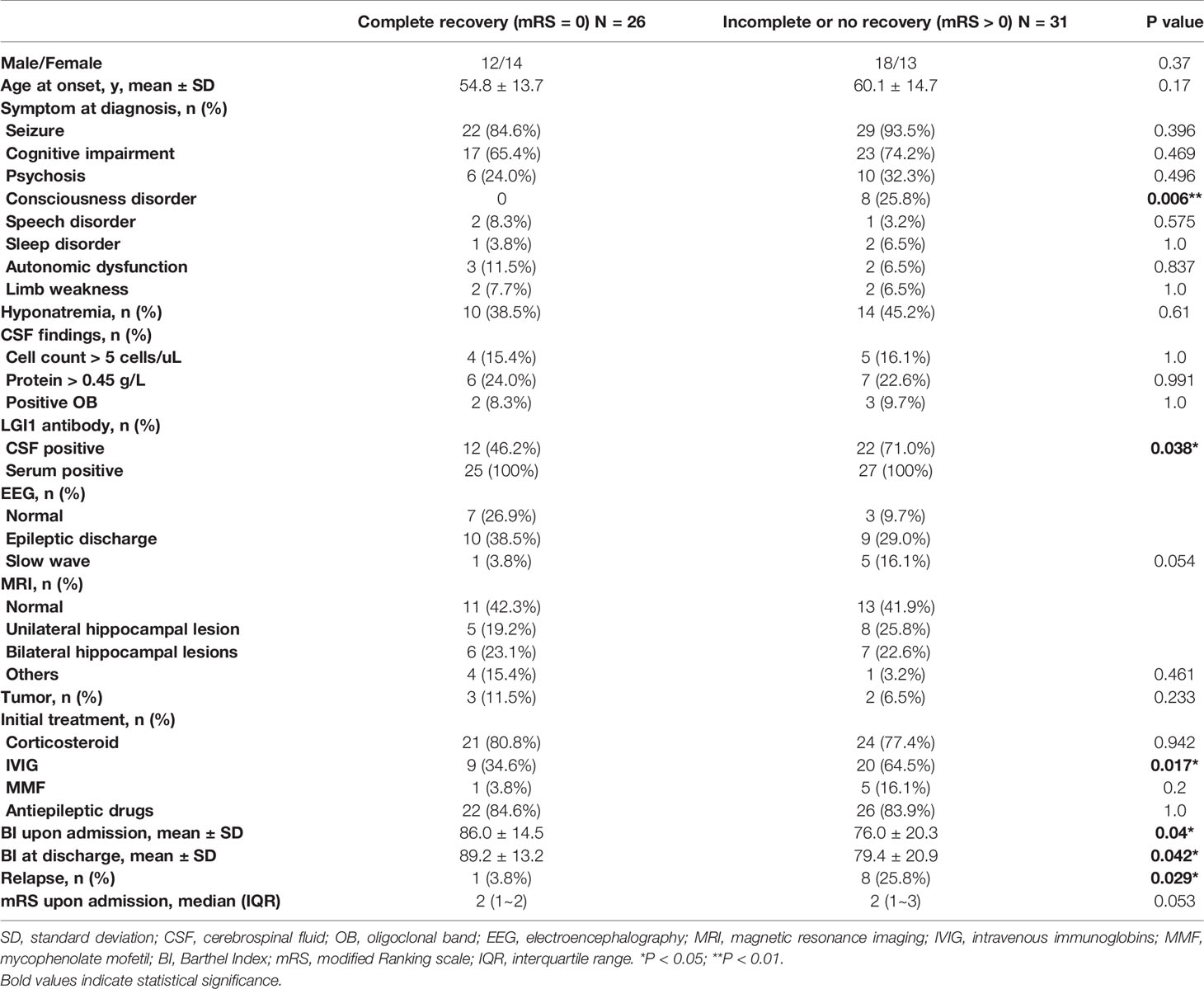 Table 2 Comparison between patients with complete recovery and those experiencing incomplete or no recovery at 12 months after discharge. 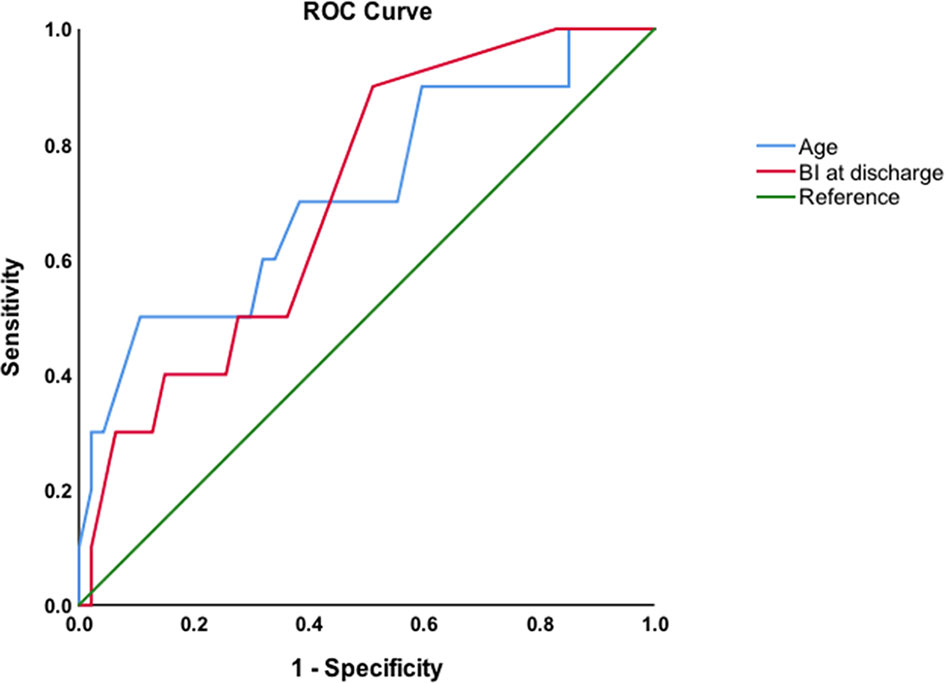 Clinical characteristics and potential mechanisms of anti-LGI1 encephalitis still need further elucidation. We investigated the factors associated with unfavorable functional outcome in anti-LGI1 encephalitis, and found that patients with positive CSF LGI1 antibodies and those who relapsed had worse outcome after treatment.

As a neuron-secreted protein, LGI1 forms a trans-synaptic complex with presynaptic proteins ADAM11/23 and postsynaptic proteins ADAM22. LGI1 is involved in synaptic transmission of neuronal excitability, regulating the presynaptic voltage-gated potassium channel complex (VGKC) and postsynaptic α-amino-3-hydroxy-5-methyl-4-isoxazolepropionic acid (AMPA) receptors (1). Consistent with previous studies (2–5), our patients showed typical manifestations such as seizures (particularly FBDS) and cognitive deficit, and some patients had hippocampal T2/FLAIR hyperintense signals or hippocampal atrophy/sclerosis. This is because LGI1 antibodies [mainly of IgG4 subclass (2, 7, 8)] are believed to alter Kv1.1 subunit of VGKC as well as AMPA receptors, causing neuronal hyperexcitability and reducing long-term synaptic plasticity in the hippocampus (1, 9). HLA class II was reported to relate with anti-LGI1 encephalitis, particularly HLA-DRB1*07:01 (8, 10). However, the exact mechanisms that underlie the effects of anti-LGI1 antibodies remain to be investigated.

Evidence of intrathecal LGI1 antibody synthesis is increasing (7, 11, 12), although passive diffusion from blood cannot be excluded. The positive rate of LGI1 antibody was higher in serum than in CSF in our patients, which is in line with most other studies (3–5, 13, 14) except for that of Ariño et al. (2). However, our patients had a relatively lower detection rate of LGI1 antibodies in CSF and better functional outcome compared to some other studies (2–4). Consistent with our findings, positive LGI1 antibodies in CSF were found to correlate with increased neuronal excitability (11) and poor outcome recently (8). Similarly, an elevated LGI1-IgG CSF index was reported to predict unfavorable neurological outcome (7), indicating that intrathecal antibody synthesis may lead to more severe neuronal impairment. Moreover, being negative for CSF LGI1 antibodies may not exclude intrathecal LGI1 autoantibody production (11), since the antibodies could rapidly bind to their antigens, which may lead to a false-negative CSF diagnosis. Nevertheless, consistent with the findings of Ariño et al. (2), neither LGI1 antibody titers in CSF nor those in serum were found to relate with outcome in our study.

Clinical relapse occurred in 15% of our patients, which is lower than previously reported (2, 3). This was probably related to better recognition of this disease and more timely treatment in recent years. Relapse has been reported to correlate with unfavorable outcome in previous studies (2), but predictors of relapse have not been elucidated. It appears logical that aged patients with a low Barthel Index may have a higher risk of relapse, perhaps due to their impaired immunity and more severe initial symptoms. However, most of the relapsing patients were just treated with steroids or IVIG before relapse, only a few received both treatments. None of them were administered mycophenolate mofetil (MMF) before relapse, but half of the relapsing patients received MMF. Thus, optimal form and duration of immunotherapy for anti-LGI1 encephalitis patients remain to be identified.

A major limitation of this study is that only a cell-based assay (CBA) was performed to detect LGI1 antibodies using commercial kits since the positive rate of LGI1 antibodies in CSF may vary depending on the detection assays (2–5). Although both the sensitivity and specificity of the commercial CBA kit used in this study is claimed as 100%, there has been literature reporting false-negative results using this kit, and a combination of both tissue- and cell-based assays is recommended (3). Another limitation is its retrospective nature with limited availability of blood/CSF samples. Thus some tests (e.g. IgG subclasses of LGI1 antibody and HLA typing) cannot be performed. Others include the relatively small sample size and short follow-up, and the use of only mRS for outcome evaluation. More patients are being prospectively enrolled and a longer follow-up is being performed to monitor their long-term outcome.

Patients with positive LGI1 antibodies in CSF and those who relapsed were more likely to suffer worse outcome. Early recognition of these patients and providing more aggressive immunotherapy may result in better recovery. Prospective studies with larger sample sizes are warranted to provide more evidence and to enable optimal treatment decisions for these patients.

The studies involving human participants were reviewed and approved by the Ethics Committee of Xuanwu Hospital, Capital Medical University. The patients/participants provided their written informed consent to participate in this study.

This project was supported by the National Key Research and Development Program of China (2020YFC2005403) and the Beijing Municipal Administration of Hospitals Incubating Program (PX2020035).

The Supplementary Material for this article can be found online at: https://www.frontiersin.org/articles/10.3389/fimmu.2021.772096/full#supplementary-material

Copyright © 2021 Cui, Boltze and Zhang. This is an open-access article distributed under the terms of the Creative Commons Attribution License (CC BY). The use, distribution or reproduction in other forums is permitted, provided the original author(s) and the copyright owner(s) are credited and that the original publication in this journal is cited, in accordance with accepted academic practice. No use, distribution or reproduction is permitted which does not comply with these terms.