Multiple sclerosis (MS) is the result of a complex interplay between genetic and environmental risk factors. Prevention of MS is becoming a reasonable aspiration, but it depends on the extent risk factors can be modified or mitigated. Cigarette smoking remains the most important single cause of preventable mortality and morbidity in the world. Exposure to cigarette smoke is also an important modifiable environmental risk factor for MS development and its clinical course (1–4), with epidemiological studies reporting a 50% higher risk of MS development in ever-smokers compared to never-smokers. (5)

The population attributable fraction (AF) of disease due to exposure, or the proportion of the disease in a population attributable to smoking, can be used to assess the contribution of smoking to the risk of disease development. Estimating the AF could be a strong incentive to prevent disease by measuring the population burden associated with a given exposure. For example, the AF for smoking in people with lung cancer is 85% (6), indicating that a substantial number of lung cancers would not have occurred and relatively less lives would be lost if people did not smoke.

For smoking-associated diseases such as MS, the smoking AF increases with a higher prevalence of smoking in the population. Estimating the AF of MS due to smoking would determine the proportion of MS that could be avoided if people did not smoke. In this study, we estimated the AF due to smoking of MS in the Swedish population.

Our study population included individuals with MS and population-based controls participating in two large Swedish cohorts, the Epidemiological Investigation of Multiple Sclerosis (EIMS) and the Genes and Environment in Multiple Sclerosis (GEMS). (7) In the EIMS study, individuals with newly diagnosed MS (fulfilling the McDonald criteria), aged between 16 and 70 years, were identified at neurology clinics throughout Sweden and invited to participate in the study by completing a questionnaire and donating a blood sample. (8) The GEMS study includes prevalent cases of MS fulfilling the McDonald criteria who were identified from the Swedish National MS registry. (9) There were no overlap of cases between EIMS and GEMS. Controls were randomly selected from the national population register matched for age (equivalent of age at the diagnosis in cases), gender, and residential area at the time of the disease diagnosis. In both studies, information on exposure to tobacco smoking was obtained by asking about current and previous smoking habits. We defined “smokers” as those who have ever smoked cigarettes regularly before MS onset or the equivalent age in controls.

For the calculation of AF, we used the method suggested by Dahlqwist et al. (12) In short, the method calculates confounder adjusted AF estimates for case-control study design. For each case of MS we identified one exact calendar year of birth and sex matched control while adjusting all the models for calendar year of birth in five groups. This was mainly done to account for changes in the prevalence of smoking in the Swedish general population over the years. Overall and sex stratified AF were calculated in the first instant. We also calculated AF stratified by HLA and non-HLA genetic burden. The genetic risk scores were dichotomized by the median score of the population-based controls. In a subset of individuals with information on HLA DRB1*15:01, we calculated smoking AF due to interaction (carriage of HLA DRB1*15:01 and being a smoker). 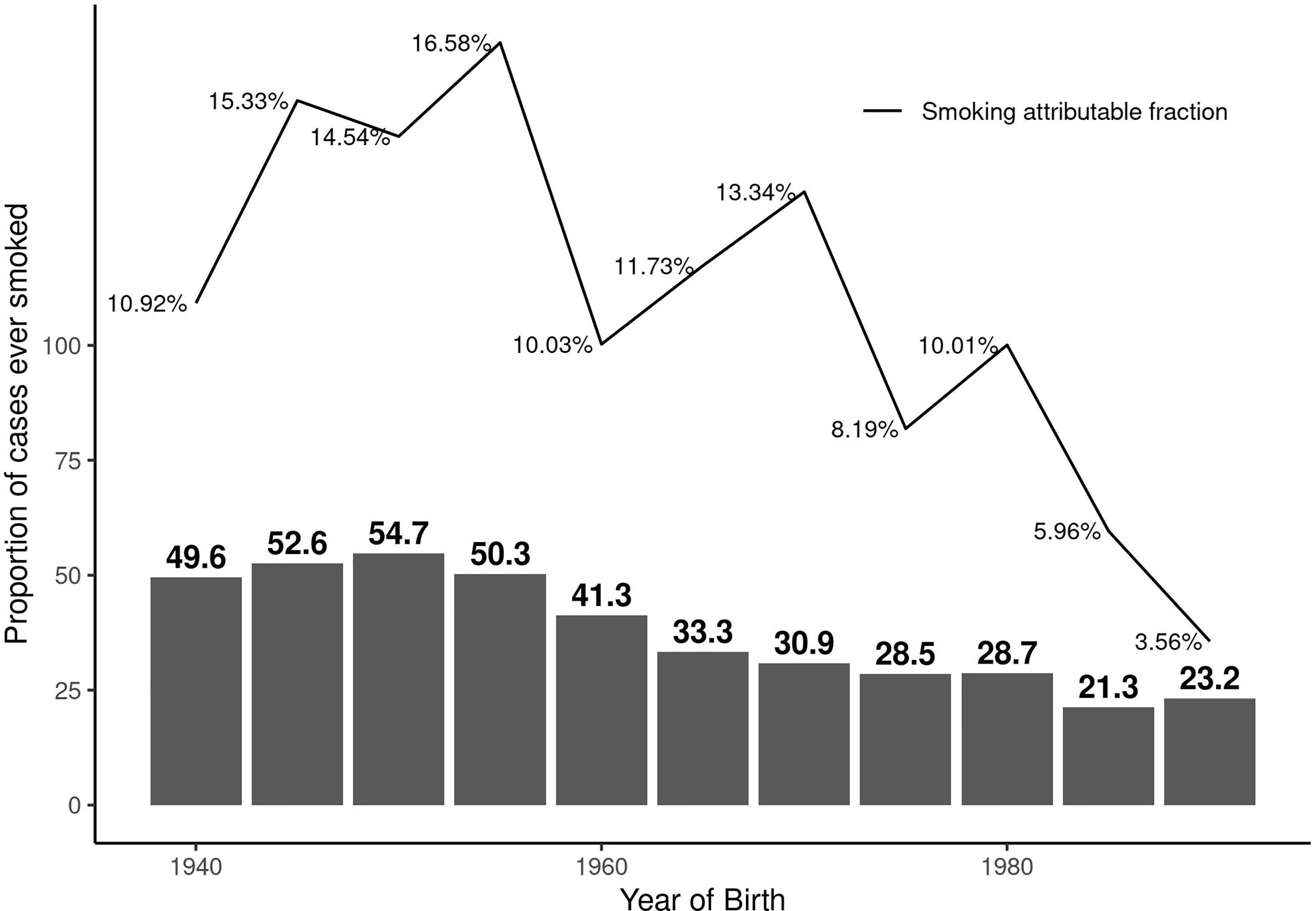 Figure 1 Proportion of persons with MS who have ever regularly smoked and the corresponding smoking attributable fraction (AF) over calendar year of birth by five-year birth-cohort. 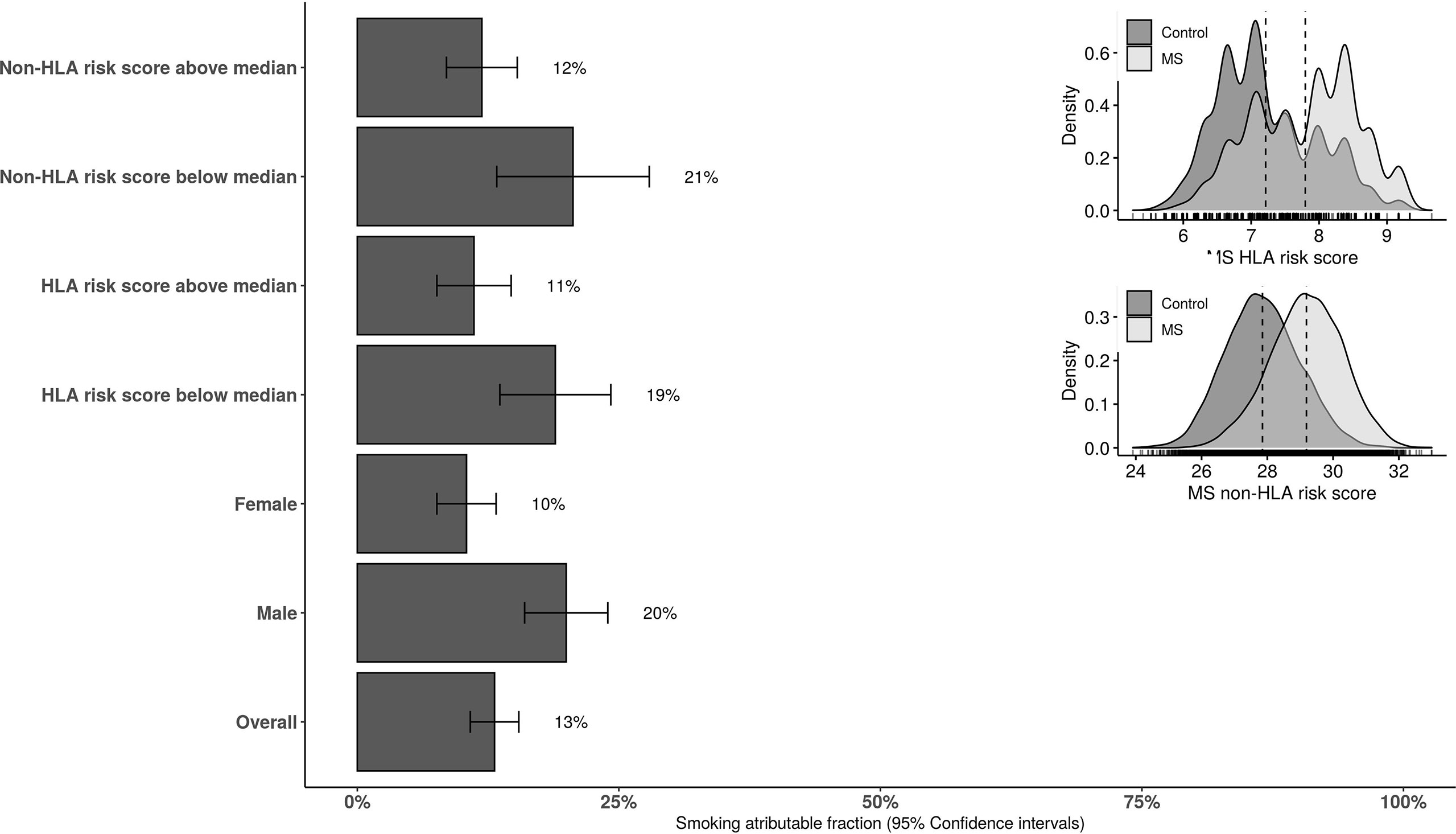 Figure 2 The overall and stratified smoking attributable fraction (95% confidence intervals) for risk of MS. HLA and non-HLA risk scores are categorized to below and above the median score in the population-based controls. HLA, human leucocyte antigen.

Our previous estimates of smoking AF in MS was 20% (active or passive) which was further increased to 41% in subjects who had carriage of HLA-DRB1*15 and absence of HLA-A*02. (15) This study includes a much greater number of cases and controls compared to our previous study. We also used polygenic risk scores and specific risk alleles (HLA DRB1*15:01) which provide additional information with regard to the interaction between smoking and MS genetics. We previously estimated that about 5% of the MS cases could be attributed to passive smoking. (15) Passive smoking (for example, exposure to parental smoking in childhood) has not been included in the present analysis. However, we could confirm that smoking cessation and to lesser extent reducing smoking intensity could be potentially beneficial in reducing the impact of smoking in MS. We also observed a decline in smoking AF in a more contemporary cohorts of MS as the smoking prevalence declines in the general population. Given that the majority of environmental risk factors for MS tend to exert their most powerful effect in childhood and adolescent years and that parental smoking is a risk factor for MS, it is possible that a further fraction of MS could be prevented in the offspring of smokers. Although an AF of MS due to passive smoking cannot be calculated in the current study, this consideration reiterates the possibility that the 13% of MS attributable to smoking is underestimated.

Smoking remains a major modifiable risk factor for many morbidities, including MS. The association of smoking with a worsened outcome in multiple conditions, including MS, (16) has incentivized smoking cessation. In this regard, several smoking cessation campaigns have been effective in reducing smoking in the population, encouraging cessation. (17) If a smoking avoidance campaign has similar rates of success, an important proportion may avoid MS.

Our previous studies addressed the interaction between MS risk factors such as smoking, HLA DRB1*15:01, obesity, sun exposure, and EBV seropositivity. The interaction of HLA DRB1*15:01 with smoking increased the combined AF for MS. Here, we used a combined genetic risk scores which does not take only HLA DRB1*15:01 into account, and find a slightly less multiplicative increase when population was stratified by their MS genetic susceptibility. We consider a smoking AF of 13% an accurate overall estimate, but are aware that the interaction of smoking with other risk factors is complex. For example, smoking has complex, stimulatory effects on the immune system (4) and can enhance inflammatory contributors such as EBV and counteract protective factors such as sun exposure. Smoking has also shown to be associated with the worsening of disability in MS (1) and smoking cessation to be beneficial (2, 18). To date, no study has investigated the smoking AF with regard to disability accumulation in MS. Such study could be highly valuable in informing persons with MS and healthcare providers about benefits of smoking cessation.

Our AF for smoking in MS of 10% to 15% is lower than for other conditions, including lung cancer. (6) However, this proportion, as well as absolute numbers behind it, is nevertheless substantial. Taking the conservative AF of 13%, a minimum 364,000 of the 2.8 million MS cases worldwide could potentially have been prevented. Considering that fear of long-term disability associated with neurological disease is for many people more prominent than fear of cancer, (19) MS is probably a strong deterrent to smoking initiation. Avoidance and prevention-focused educational campaigns may be more successful than cessation campaigns.

This, and the fact that smoking preventability is more achievable than prevention of other risk factors such as EBV infection or its consequence, infectious mononucleosis, qualifies smoking prevention as a key strategy in preventing MS.

In addition, many more MS cases, even if unpreventable, would be likely to have a milder course, given the contribution of smoking to disease severity and progression.

In conclusion, integrated efforts need to be aimed not only at smoking cessation but crucially also at smoking prevention. The former will make relapses and disability progression in MS in part preventable, while the latter will make a substantial proportion of MS a preventable disease.

Data related to the current article are available from Ingrid Kockum, Karolinska Institutet. To be able to share data, a data transfer agreement needs to be completed between Karolinska Institutet and the institution requesting data access. This is in accordance with the data protection legislation in Europe (General Data Protection Regulation [GDPR]). Persons interested in obtaining access to the data should contact AM (ali.manouchehrinia@ki.se).

The studies involving human participants were reviewed and approved by Stockholm ethical regional board at Karolinska Institutet. The patients/participants provided their written informed consent to participate in this study.

The authors thank neurologists, nurses, and patients with MS and controls in Sweden for their participation in the EIMS and GEMS cohorts. Ali Manouchehrinia is supported by the Margaretha af Ugglas Foundation.

The Supplementary Material for this article can be found online at: https://www.frontiersin.org/articles/10.3389/fimmu.2022.840158/full#supplementary-material

19. Doward J. Call to End the Stigma of Having a Brain Disorder | Disability | The Guardian. Available at: https://www.theguardian.com/society/2016/jun/25/disability-victims-suffer-bullying-and-teasing?CMP=gu_com (Accessed December 6, 2021).

Copyright © 2022 Manouchehrinia, Huang, Hillert, Alfredsson, Olsson, Kockum and Constantinescu. This is an open-access article distributed under the terms of the Creative Commons Attribution License (CC BY). The use, distribution or reproduction in other forums is permitted, provided the original author(s) and the copyright owner(s) are credited and that the original publication in this journal is cited, in accordance with accepted academic practice. No use, distribution or reproduction is permitted which does not comply with these terms.