The concrete material models commonly used for nonlinear dynamic analysis by LS-DYNA software include the HJC material model, concrete damage model, pseudo-tensor material model, the isotropic elastoplastic model with failure, and brittle damage model. Chen Cheng and Ou Bifeng et al. (Gu, 2015; Xingmin et al,; Zou et al., 2015) analyzed and compared these material models through numerical tests and concluded that the HJC model was the most suitable for low-speed collision. The strain rate effect was more comprehensive in consideration. The prediction of uniaxial dynamic compression power was closer to the actual strength. Therefore, the HJC model is used to simulate the structure of reinforced concrete tower foundation in dynamic analysis of the transmission tower impacted by a rolling stone.

The HJC material model is developed from the JC model and mainly includes three aspects: the equation of state, the yield surface, and the damage evolution equation (Jingcai et al., 2008).

The HJC material model uses a piecewise equation of state to describe the relationship between the concrete hydrostatic pressure and volumetric strain. As shown in Figure 1, the first linear elasticity stage (OA) satisfies the linear relationship: k = p/μ; the next stage (AB) is the transition stage, and the elastic bulk modulus at any point in this stage can be calculated by the following interpolation; the final third stage (BC) is the complete compaction stage, in which the hydrostatic pressure and volumetric strain are expressed by a cubic polynomial. 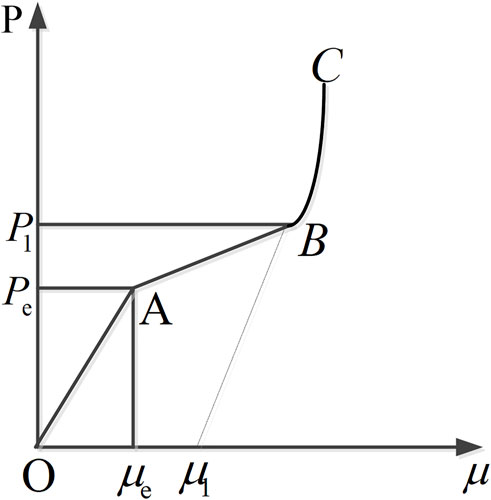 The HJC material model is described by equivalent stress; then, the yield surface equation can be expressed as follows:

where is the real equivalent stress, is the actual pressure, is the reference strain rate, is the strength parameter of the material, is the material damage factor, and is the static compressive strength of the concrete.

The damage factor of the material in the HJC model is obtained by the continuous accumulation of the equivalent plastic strain and plastic volume strain. The equation is as follows:

where and are the damage constants; is the maximum tensile strength.

In this study, a 500-kV Zigzag angle tension tower is taken as the research object. The nominal height of the tower is 20 m, the total height is 33.8 m, the tower material is Q235 angle steel, the specification is L36 × 4, the tower foundation is made of concrete, and the size parameter is 60 × 60 × 160mm; the calculation model diagram is shown in Figure 2. The tower body is made of the beam element beam161, and the rolling stone and tower foundation are made of solid164. The specific parameters of each material model are shown in Table 1. 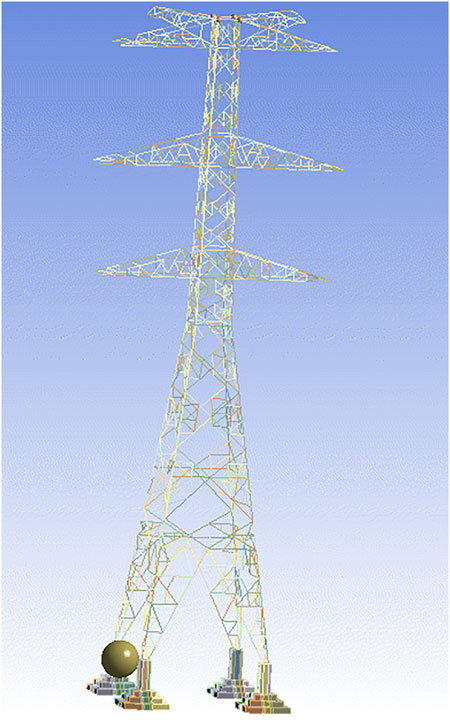 Constraint settings: the overall model is set with gravity constraints, and the bottom of the hit tower base and the other three tower bases are restricted by three degrees of freedom, as shown in Figure 3. 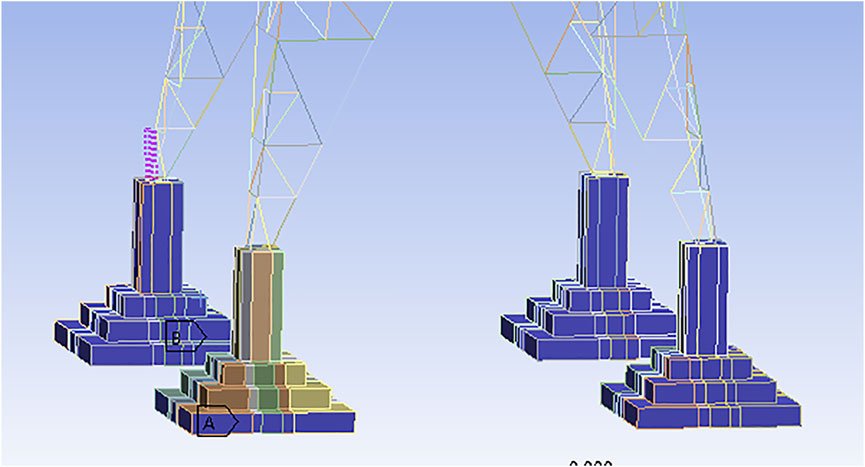 Load setting: in the initial analysis step, set the initial velocity to the reference point of the rolling stone. See the following text for the initial rate.

In order to verify the accuracy and rationality of the numerical model and its parameters in this study, the impact test, as shown in Figure 4, is carried out in this study, and then, the working conditions of the test are simulated by the simulation model introduced in 2.3, the maximum impact force at the impact point is extracted, and the simulation results are compared with the experimental data. 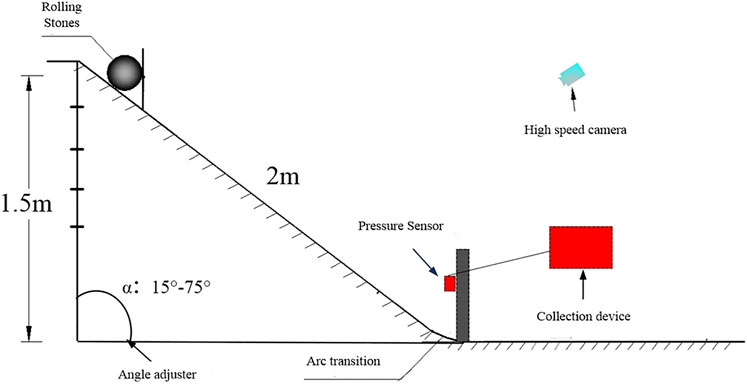 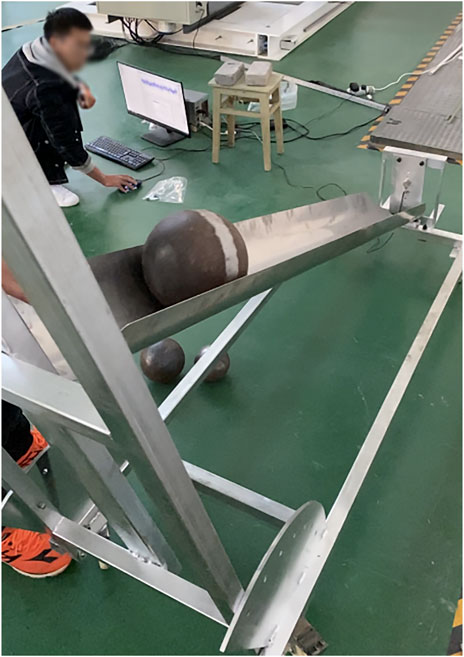 3.1 Analysis of the dynamic response process of a rolling stone impacting a tower with different masses 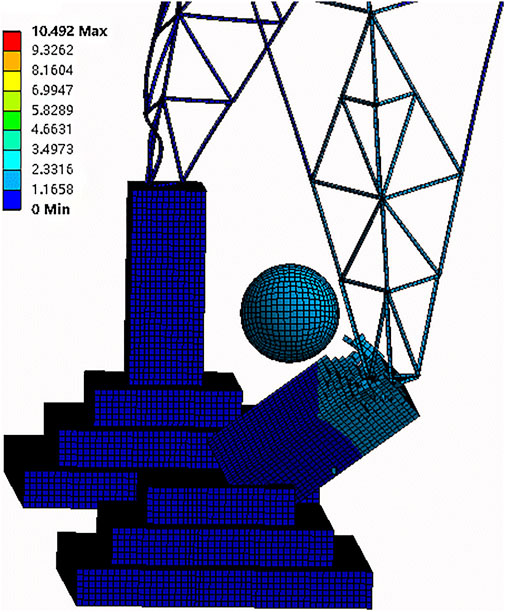 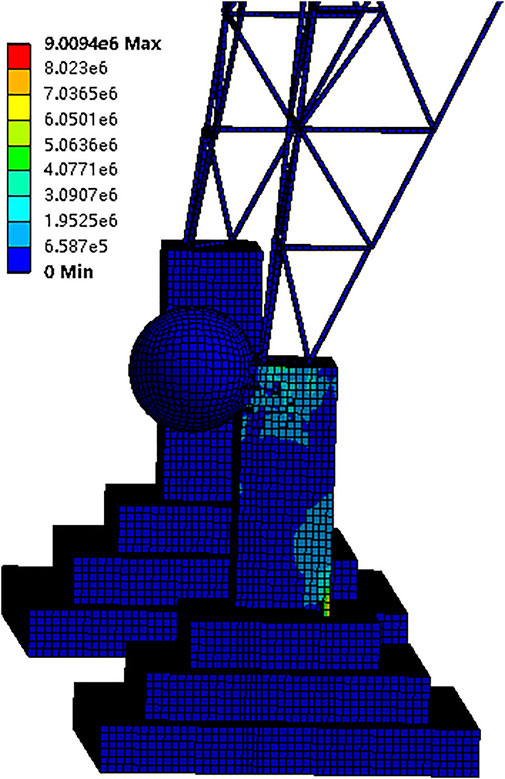 The stress-time history curves of the tower foundation under different operating conditions are shown in Figure 8, which can be obtained by combining with Figure 5. The changing trend of the stress curve under each working condition is the same, but the amplitude and time of the peak value are different. After the impact, the first stress peak of each working condition all appears within 0.02 s. Then, it falls back within 0.06 s. The impact process is very short. 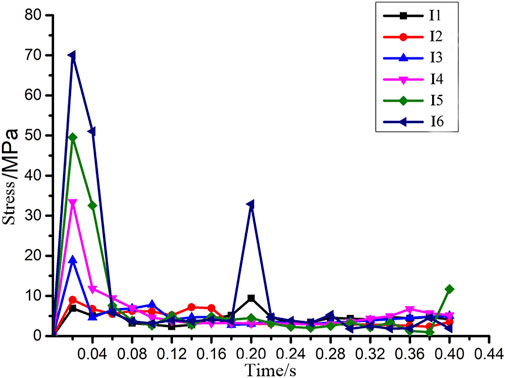 FIGURE 8. Stress−time history curve of the tower foundation under working condition I.

3.2 Analysis of the dynamic response process of a rolling stone with different initial velocities impacting a tower 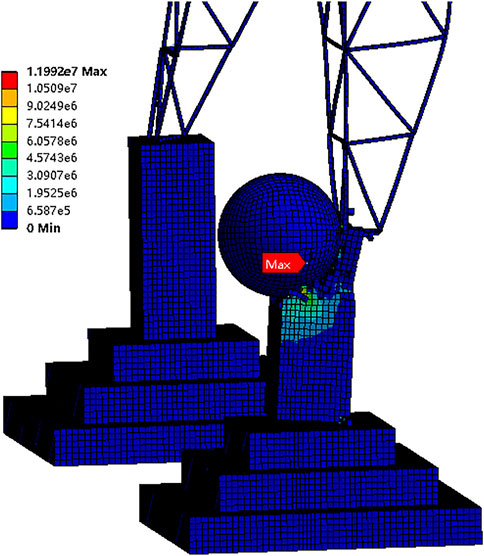 The stress–time history curves of the tower foundation under different working conditions are shown in Figure 11, from which it can be obtained:

2) On the whole, with the increase of the speed of the rolling stone, the peak stress of the tower foundation is also increasing. However, the stress curve of II1 falls back after some time after the peak. It was obvious that the 3 m/s rolling stone takes longer to knock down the tower foundation due to its lower speed. Due to the high speed of the rolling stone of II6, it directly crashed through the whole tower, so the stress remained basically the same in the process of impact, and the stress curve only began to fall back after impact.

3) The maximum impact peak value between the rolling stones with different velocities is only 38.18 M Pa, indicating that the change of velocity has less impact on the stress peak than the change of mass. 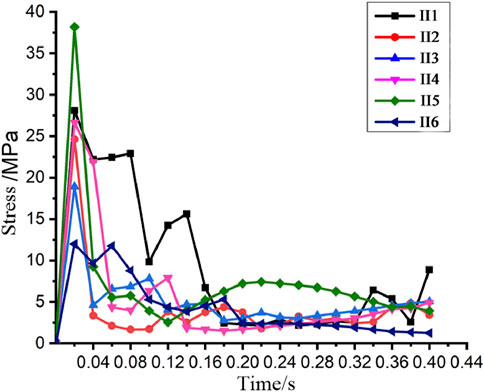 3.3 Relationship between the impact speed of the rolling stone and time 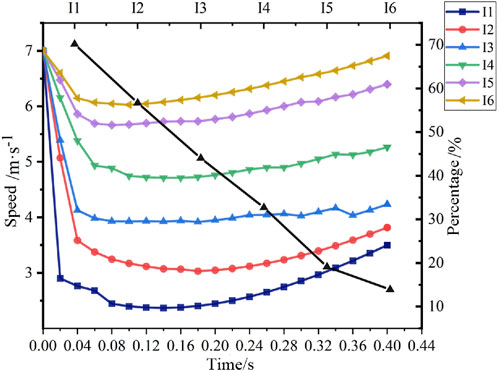 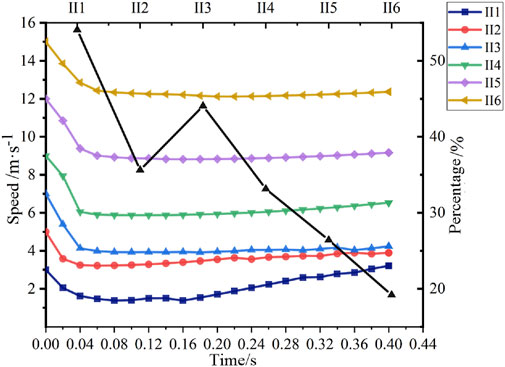 YL and WZ provided study ideas and simulation modeling, ZZ analyzed simulation graphics and data, and JH and WT summarized all the data and wrote the manuscript. All authors read and approved the final manuscript.

JF, JW, and XJ were employed by the State Grid Huzhou Electric Power Design Institute Co., Ltd. The remaining authors declare that the research was conducted in the absence of any commercial or financial relationships that could be construed as a potential conflict of interest.

Copyright © 2022 Linping, Feng, Hong, Wei, Zhiyong, Zheng, Jianping and Tian. This is an open-access article distributed under the terms of the Creative Commons Attribution License (CC BY). The use, distribution or reproduction in other forums is permitted, provided the original author(s) and the copyright owner(s) are credited and that the original publication in this journal is cited, in accordance with accepted academic practice. No use, distribution or reproduction is permitted which does not comply with these terms.