Escherichia albertii is an emerging member of the Enterobacteriaceae causing human and animal enteric infections. Antimicrobial resistance among enteropathogens has been reported to be increasing in the past years. The purpose of this study was to investigate antibiotic resistance and resistance genes in E. albertii isolated from Zigong city, Sichuan province, China. The susceptibility to 21 antimicrobial agents was determined by Kirby–Bauer disk diffusion method. The highest prevalence was tetracycline resistance with a rate of 62.7%, followed by resistance to nalidixic acid and streptomycin with a rate of 56.9 and 51.0%, respectively. All isolates were sensitive or intermediate susceptible to imipenem, meropenem, amoxicillin–clavulanic acid, and levofloxacin. Among 51 E. albertii isolates, 15 were extended-spectrum β-lactamase-producing as confirmed by the double disk test. The main β-lactamase gene groups, i.e., blaTEM, blaSHV, and blaCTX-M, were detected in17, 20, and 22 isolates, respectively. Furthermore, four colistin-resistant isolates with minimum inhibitory concentrations of 8 mg/L were identified. The colistin-resistant isolates all harbored mcr-1 and blaCTX-M-55. Genome sequencing showed that E. albertii strain SP140150 carried mcr-1 and blaCTX-M-55 in two different plasmids. This study provided significant information regarding antibiotic resistance profiles and identified the co-occurrence of β-lactamase and MCR-1 encoding genes in E. albertii isolates.

Antimicrobials are one of the most successful forms of chemotherapy used in the treatment of infectious diseases by killing or inhabiting the growth of microorganisms. The most important and widely used antimicrobials are β-lactam drugs. In recent years, antimicrobial resistance among Gram-negative bacteria has been reported to be increasing (MacVane, 2017). In Enterobacteriaceae, resistance to the β-lactam is mediated by production of β-lactamase enzymes which inactivate the drugs by hydrolyzing the β-lactam ring (Bush and Bradford, 2016). Some clinically most important enzymes are as follows: (1) extended-spectrum β-lactamases (ESBLs), including SHV, TEM and CTX-M types; (2) carbapenemases, including class A (KPC types), class B metallo-β-lactamases (MBLs), and class D oxacillinases; and (3) the AmpC cephalosporinases (Bonomo, 2017).

Colistin is an antibiotic of last resort for the treatment of extensively drug-resistant Gram-negative bacteria (Kaye et al., 2016). In a recent study, the emergence of plasmid-mediated colistin resistance has been reported in E. coli, raising a great concern around the world (Liu et al., 2016). Thereafter, plasmid-mediated colistin resistance gene (mcr-1) has also been identified in other members of the Enterobacteriaceae from South America, Asia, Europe and Africa, suggesting that mcr-1 might be widespread (Olaitan et al., 2016; Al-Tawfiq et al., 2017).

Identification of the ESBL-Producing Isolates

The double disk test was performed to confirm the ESBL phenotype. It was carried out on MHA with two pairs of disks (ceftazidime + ceftazidime/clavulanic acid and cefotaxime + cefotaxime/clavulanic acid) (BD Diagnostics, United States). The results were interpreted as recommended by the CLSI (CLSI, 2016). E. coli ATCC 25922 and Klebsiella pneumoniae ATCC 700603 were used as the quality control strains.

Detection of the β-Lactamase Gene Groups

Escherichia albertii isolates were inoculated on LB agar and incubated overnight at 37°C. A colony was suspended in 50 μl of sterilized distilled water and boiled for 10 min. The cell suspension was centrifuged at 10,000 × g for 5 min, and the supernatant was used as template DNA. PCR was performed to screen the main β-lactamase gene groups, i.e., blaTEM, blaSHV, blaCTX-M, blaKPC, and blaNDM genes. All primers and PCR conditions used in this study were presented in Supplementary Table S1. Each reaction tube contained 10 μl of master Mix (Qiagen, Germany), 0.5 μM of forward and reverse primers, and 1 μl of template DNA, and was made up to a total volume of 20 μl with sterile distilled water.

Detection and Sequencing of the mcr-1 Gene

The mcr-1 sequences obtained in this study have been deposited in GenBank under accession numbers: KX765477–KX765480.

Plasmid DNA profiles of all 51 E. albertii isolates were analyzed using the S1-nuclease pulsed-field gel electrophoresis (PFGE) method. Briefly, the bacterial cells embedded in agarose were lysed by SDS/proteinase K, and then were digested with 8 U S1-nuclease at 37°C for 30 min. Finally, each sample was resolved by PFGE in a Chef-Mapper (Bio-Rad, United States) at 14°C, with a switch time 2.16 to 54.17 s at 6 V/cm for 18 h. Each DNA band visualized was considered as a unit length of linear plasmid. The approximate size of each plasmid was determined by comparing profiles with XbaI-digested DNA from Salmonella serotype Braenderup strain H9812 (Bai et al., 2017).

Four of the mcr-1-positive isolates were selected for conjugation experiments. Filter conjugation was carried out using E. coli J53 (sodium azide-resistant) as the recipient. The donor and recipient were grown on LB medium to an optical density at 600 nm of 0.5, mixed equally, and then incubated on sterilized filter paper for 4 h. The filter was then resuspended in LB medium, and dilutions were plated on M-H agar containing sodium azide (150 μg/mL and colistin (4 μg/mL) to select for transconjugants. Mobilization efficiency was calculated as the number of transconjugant colonies divided by the number of donor colonies (Wang et al., 2011).

The complete genome sequences of SP140150 isolate are available at GenBank under the accession numbers: CP025676–CP025679.

Antimicrobial resistance in E. albertii isolates was determined against 21 antibiotics. The highest prevalence was tetracycline resistance with a rate of 62.7% (32/51), followed by resistance to nalidixic acid and streptomycin with a rate of 56.9% (29/51) and 51.0% (26/51), respectively. Resistance rate to cefuroxime, piperacillin, and chloramphenicol was 45.1, 43.1, and 41.2%, respectively. Lower resistance was observed for ampicillin/sulbactam, cefepime, cephalothin, ceftriaxone, aztreonam, kanamycin, gentamicin, norfloxacin, ciprofloxacin, trimethoprim/sulfamethoxazole, and furadantin with a rate ranging from 17.6 to 39.2%. All isolates were sensitive or intermediate susceptible to imipenem, meropenem, amoxicillin–clavulanic acid, and levofloxacin (Figure 1). 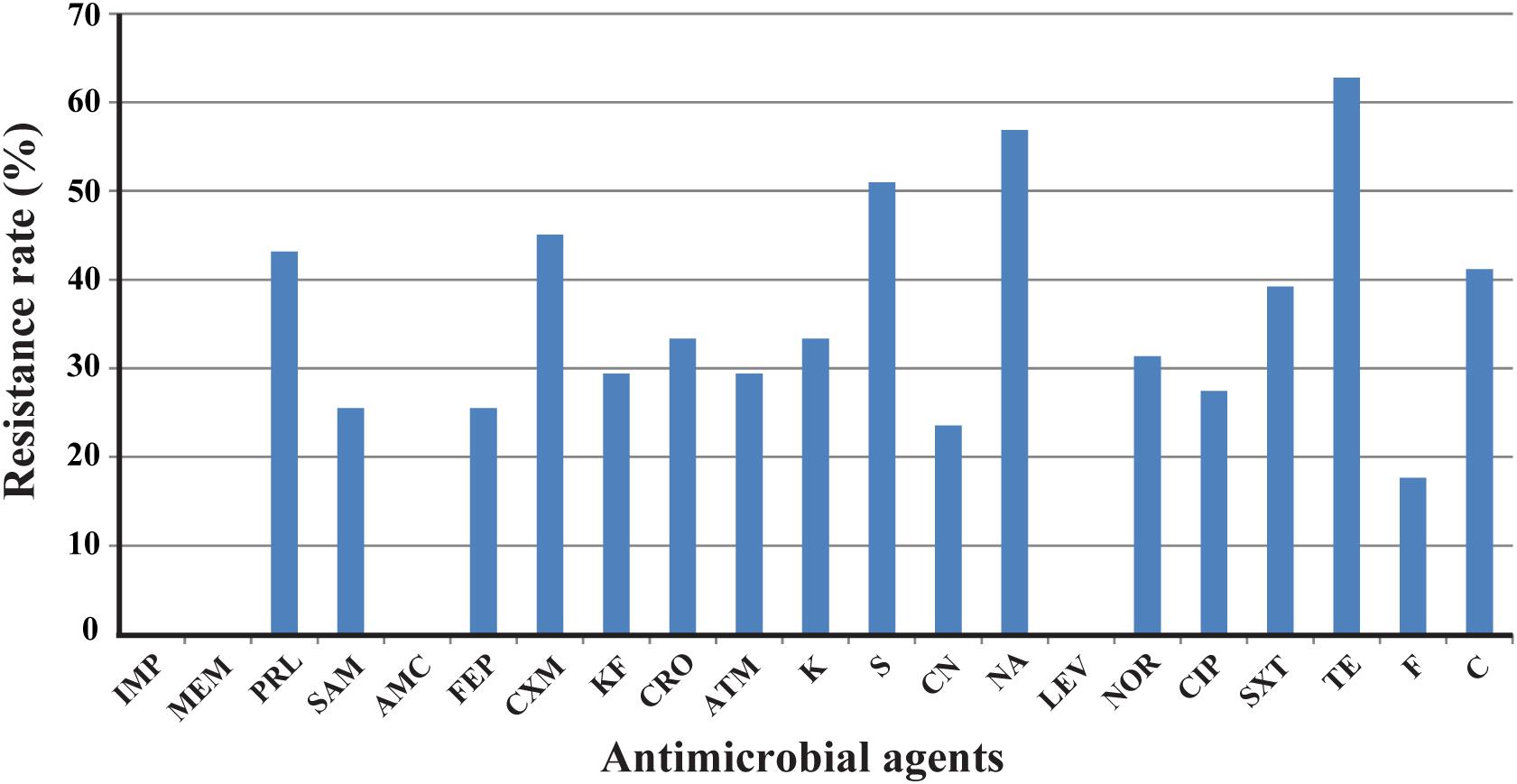 Ten isolates (19.6%) were resistant to one antimicrobial agent, while the majority exhibited resistance to two or more antimicrobials tested. All isolates from diarrheal patients and healthy carriers were susceptible to imipenem, meropenem, piperacillin, cefepime, aztreonam, and levofloxacin (Supplementary Table S2). 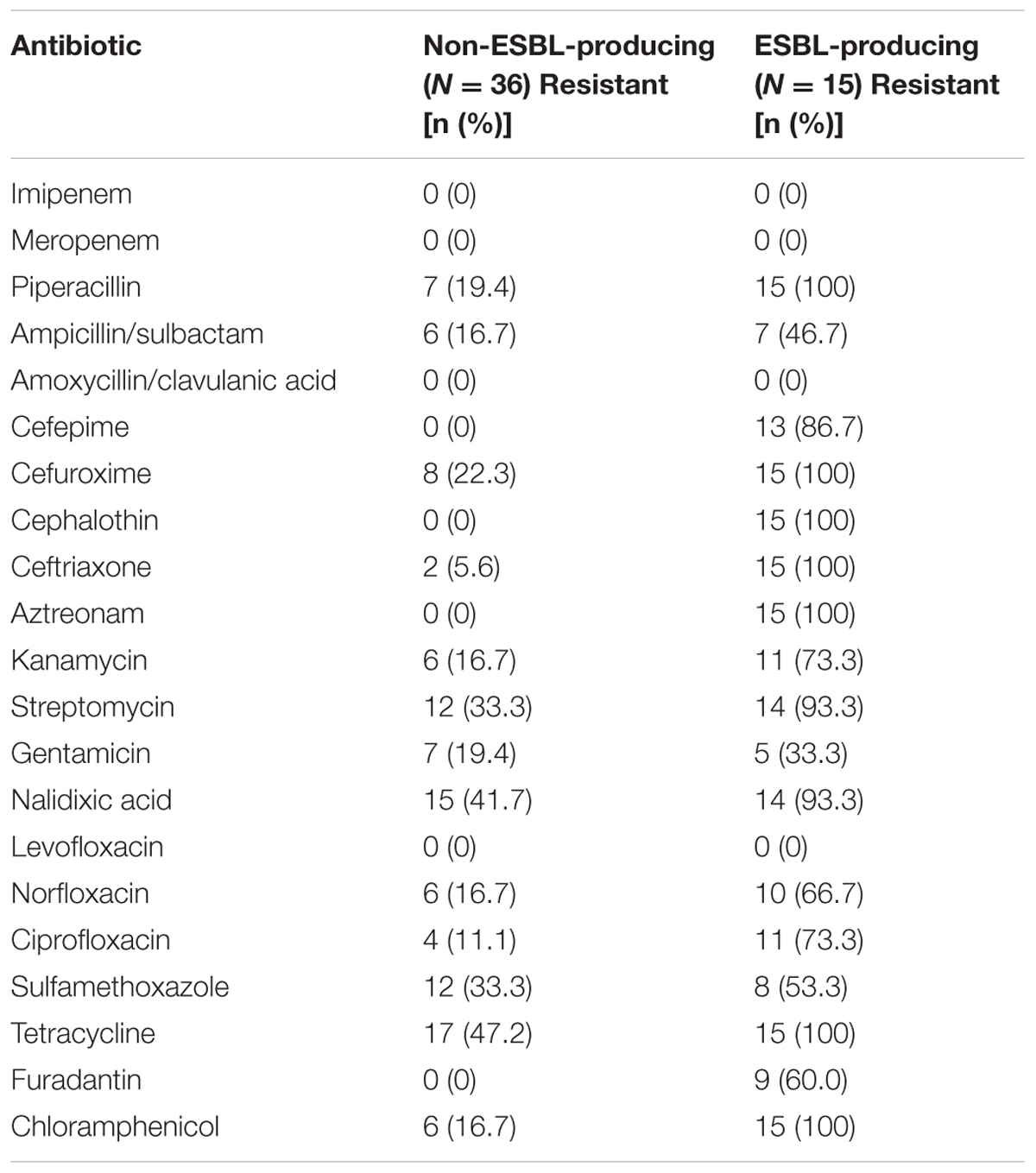 The main β-lactamase gene groups (blaTEM, blaSHV, blaCTX-M, blaKPC, and blaNDM) were screened by PCR. Eight E. albertii isolates did not contained any β-lactamase from gene groups tested and none was positive for blaKPC and blaNDM. The blaTEM, blaSHV, and blaCTX-M were detected in 17 (33.3%), 20 (39.2%), and 22 (43.1%) isolates, respectively. All 15 ESBL-producing isolates contained 1–3 β-lactamase genes (Supplementary Table S2).

Four out of 51 isolates (one from raw mutton, one from raw chicken meat, and two from chicken intestine) were positive for MCR-1 encoding gene by PCR. Sequencing analysis showed that the four nucleotide sequences are identical to the first reported mcr-1 sequence in plasmid pHNSHP45 (GenBank accession number KP347127).

Co-occurrence of blaCTX-M and mcr-1 Genes in E. albertii Isolates

Except one isolate T150248 from healthy carrier, plasmids ranging in size from 36 to 283 kbp were identified by S1-nuclease-based PFGE in 50 E. albertii isolates. Among which, 23 isolates harbored one plasmid; 13 harbored two plasmids; 10 harbored three plasmids; three harbored four plasmids; and one isolate harbored five plasmids (Supplementary Table S2). Two different size plasmids (56 and 113 kbp) were identified in all four colistin-resistant isolates, and an additional 45 kbp plasmid was present in three out of four colistin-resistant isolates (Table 2). 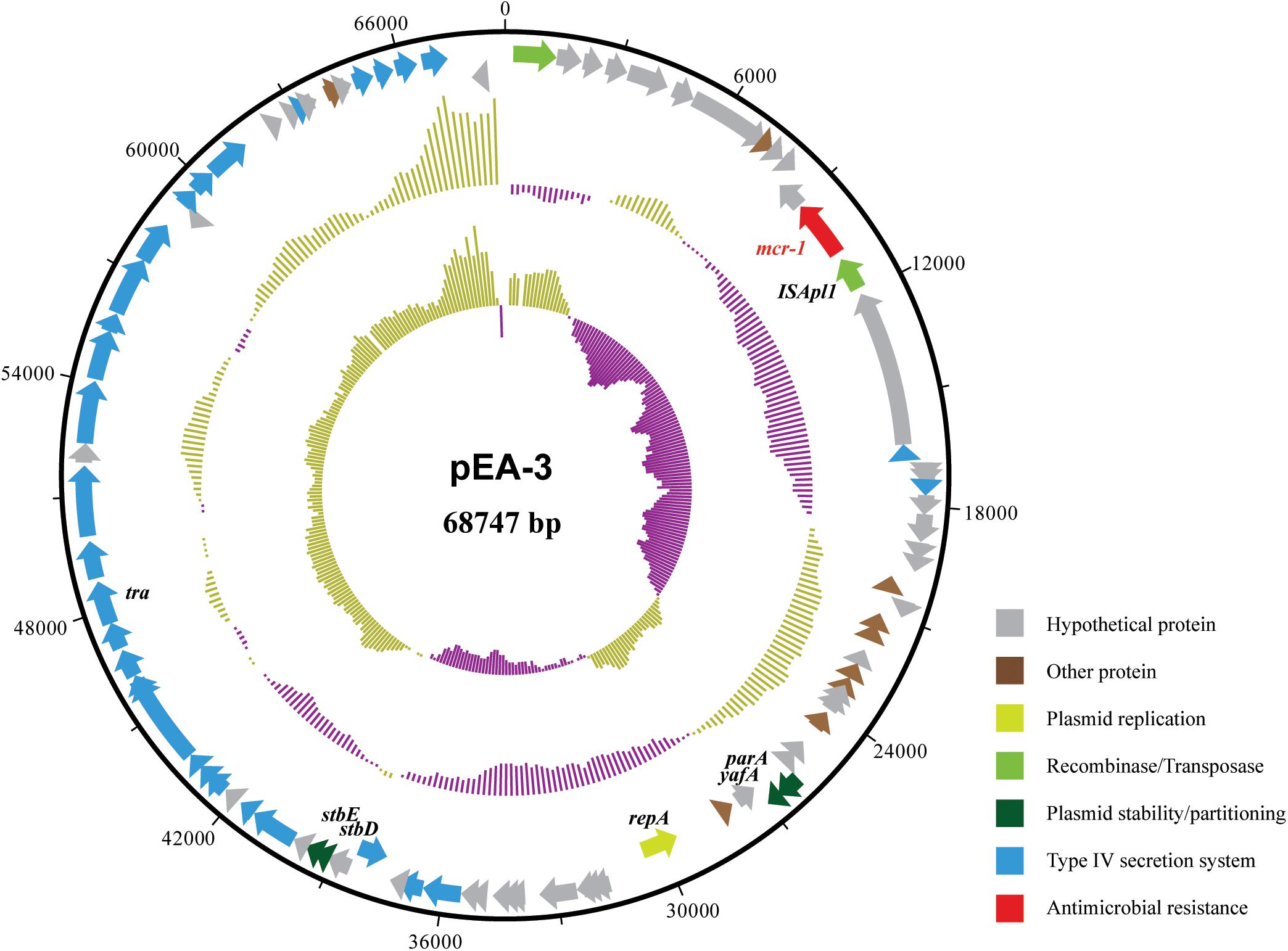 Antimicrobial resistance is an increasingly encountered phenomenon among the Enterobacteriaceae and an alarming threat to global health (Laxminarayan et al., 2013). Resistance to β-lactams is primarily because of bacterially produced β-lactamases that are able to hydrolyze the β-lactam ring (Bush and Bradford, 2016). There are several reports of porin-mediated resistance in clinical isolates of enterobacteria, mainly affecting susceptibility to β-lactams (Martinez-Martinez et al., 1996; Poirel et al., 2004; Pavez et al., 2008; Perez et al., 2013).

Some E. albertii isolates in this study demonstrated resistance to four antimicrobials identified by the World Health Organization (WHO) as being of critical importance in the treatment of human infectious diseases, including piperacillin, ampicillin, cefotaxime, and cefepime (WHO, 2012). Furthermore, 29.4% of isolates demonstrated resistance to cephalothin that was identified by the WHO as highly important in human disease treatment (WHO, 2012).

Extended-spectrum β-lactamases are defined as enzymes produced by certain bacteria that are able to hydrolyze extended spectrum cephalosporin. TEM-group (exception of TEM-1 and TEM-2), SHV-group, and CTX-M-group β-lactamases are important types of ESBLs (Ghafourian et al., 2015). Among the three types, the prevalence of CTX-M is increasing in Enterobacteriaceae and predominates as a cause of extended spectrum cephalosporin resistance (Falagas and Karageorgopoulos, 2009). In the current study, the prevalence of blaCTX-M gene in E. albertii was in agreement with those reported in the other studies (Bora et al., 2014). Besides, blaCTX-M gene was mostly detected in isolates resistant to cefotaxime. Nineteen (37.3%) of E. albertii isolates carried two or three different β-lactamase gene groups, demonstrating the co-occurrence of these genes in various combinations (Shahid et al., 2011).

Carbapenem-resistant Enterobacteriaceae have been increasingly reported worldwide. The carbapenemases include NDMs, KPCs, OXA-48, and others (Tzouvelekis et al., 2012). KPCs are currently the most common cause of carbapenem resistance worldwide. The emergence of New Delhi metallo-β-lactamase (NDM-1) and its variants had raised a major public health concern. NDM-1 can hydrolyze a wide range of β-lactam antibiotics, including carbapenems (Khan et al., 2017). In China, Wang et al. (2015) has reported that Enterobacteriaceae remained susceptible to carbapenems. In the present study, none of the isolate was positive for blaKPC or blaNDM and all isolates demonstrated susceptibility to meropenem and imipenem.

Polymyxins are active against most members of the Enterobacteriaceae family, however, some are naturally resistant to polymyxins, like Proteus, Brucella, Legionella, Campylobacter, and Vibrio (Poirel et al., 2017). In additional to intrinsic resistance, mechanisms responsible for acquired resistance to polymyxins in Enterobacteriaceae have been identified, including genes encoding LPS-modifying enzymes; regulators of the PmrAB and PhoPQ two-component systems; the intrinsic regulator RamA (Poirel et al., 2017). Recently, Liu et al. (2016) had reported plasmid-mediated colistin resistance in E. coli. Thereafter, plasmid-mediated colistin resistance gene (mcr-1) has been proved to be widespread in other members of the Enterobacteriaceae (Olaitan et al., 2016). In this study, four genetically related E. albertii isolates were positive for mcr-1 and were colistin-resistant. When the mcr-1 harboring plasmid pEA-3 sequence was compared using BLASTn to the nucleotide database at NCBI (accessed 26.01.2018), several highly similar (99% identities with query coverage over 90%) mcr-1 harboring plasmids from E. coli, Cronobacter sakazakii or Salmonella enterica were identified, suggesting that mcr-1 has also spread to E. albertii.

The present study provides significant information regarding antibiotic resistance of E. albertii from human, animal, and raw retail meats for the first time. Co-occurrence of β-lactamase and MCR-1 encoding genes in E. albertii isolates were identified. Further epidemiological assessments on the drug resistance patterns of E. albertii and determination of the molecular resistance mechanisms are needed in the treatment and prevention of both human and animal infections.

This work was supported by grants from the National Natural Science Foundation of China (81772152), the State Key Laboratory for Infectious Disease Prevention and Control (2015SKLID504), the National Basic Research Priorities Program of China (2015CB554201), and the Health and Family Planning Commission of Sichuan Province (150259).

The Supplementary Material for this article can be found online at: https://www.frontiersin.org/articles/10.3389/fmicb.2018.00258/full#supplementary-material

Copyright © 2018 Li, Wang, Xu, Bai, Wang, Zhang, Liu, Miao, Zhang, Li, Zou, Yan, Chen, Zhang, Fu, Fan, Xu, Li and Xiong. This is an open-access article distributed under the terms of the Creative Commons Attribution License (CC BY). The use, distribution or reproduction in other forums is permitted, provided the original author(s) and the copyright owner are credited and that the original publication in this journal is cited, in accordance with accepted academic practice. No use, distribution or reproduction is permitted which does not comply with these terms.