Forty-five KPC-producing Enterobacteriaceae strains were isolated from multiple departments in a Chinese public hospital from 2014 to 2015. Genome sequencing of four representative strains, namely Proteus mirabilis GN2, Serratia marcescens GN26, Morganella morganii GN28, and Klebsiella aerogenes E20, indicated the presence of blaKPC-2-carrying IncX6 plasmids pGN2-KPC, pGN26-KPC, pGN28-KPC, and pE20-KPC in the four strains, respectively. These plasmids were genetically closely related to one another and to the only previously sequenced IncX6 plasmid, pKPC3_SZ. Each of the plasmids carried a single accessory module containing the blaKPC-2/3-carrying ΔTn6296 derivatives. The ΔTn6292 element from pGN26-KPC also contained qnrS, which was absent from all other plasmids. Overall, pKPC3_SZ-like blaKPC-carrying IncX6 plasmids were detected by PCR in 44.4% of the KPC-producing isolates, which included K. aerogenes, P. mirabilis, S. marcescens, M. morganii, Escherichia coli, and Klebsiella pneumoniae, and were obtained from six different departments of the hospital. Data presented herein provided insights into the genomic diversity and evolution of IncX6 plasmids, as well as the dissemination and epidemiology of blaKPC-carrying IncX6 plasmids among Enterobacteriaceae in a hospital setting.

Klebsiella pneumoniae carbapenamase (KPC), a class A β-lactamase, can hydrolyze almost all β-lactams, including carbapenems (Bush and Fisher, 2011). At least 31 variants (KPC-2 to KPC-32; KPC-1 is essentially identical to KPC-2) of the KPC enzyme have been identified to date1. Two Tn3-family unit transposons, Tn4401 and Tn6296, which are genetically divergent from each other, represent the two major prototype genetic platforms carrying blaKPC genes (Wang et al., 2015). Tn4401 and its derivatives are frequently identified in KPC-encoding plasmids of different incompatibility groups in bacterial isolates from European and American countries, but are rarely found in isolates from China (Feng et al., 2017). The blaKPC genetic environment in isolates from China is predominantly associated with Tn6296 and its derivatives (Wang et al., 2015).

Plasmids belonging to incompatibility group X (IncX) are 30–80 kb in size and were initially discovered in the pre-antibiotic era (Datta and Hughes, 1983). IncX plasmids have a narrow host range and are mainly circulated among Enterobacteriaceae species (Norman et al., 2008). The backbones of all IncX plasmids have a pir–parA–hns–hha–topB–pilX (tivB)–actX–taxC (rlx)–taxA (dtr) organization, but are quite divergent with respect to nucleotide and amino acid sequences similarity (Johnson et al., 2012). Comparative genomic analysis has shown that IncX plasmids can be phylogenetically grouped into seven major IncX subgroups, IncX1 to IncX6 (Du et al., 2016), along with another IncX6 subgroup (Bustamante and Iredell, 2017) that is re-designated herein IncX7.

This study provides evidence for the dissemination of genetically highly similar KPC-2-encoding IncX6 plasmids among at least six Enterobacteriaceae species collected in a Chinese public hospital from 2014 to 2015. The complete nucleotide sequences of plasmids pGN2-KPC, pGN26-KPC, pGN28-KPC, and pE20-KPC, extracted from strains belonging to four representative species, were determined to be genetically closely related to the IncX6 reference plasmid pKPC3_SZ. In addition, all five plasmids carried a single accessory region that harbored the blaKPC-2/3 gene.

Four blaKPC-positive isolates, P. mirabilis GN2, S. marcescens GN26, M. morganii GN28, and K. aerogenes E20, were arbitrarily selected for genome sequencing. GN2 was isolated from the urine specimens of an elderly female with urinary tract infection in 2014, while GN26 and GN28 (in 2015) and E20 (in 2014) were isolated from sputum specimens from three different elderly males suffering from pulmonary infections. These four patients were admitted to the hospital because of primary diseases consisting of myocardial infarction, cerebral infarction sequelae, cerebral contusion and pneumonia, respectively, and developed the above hospital-acquired infections during hospitalization.

GN2, GN26, GN28, and E20 each contained an IncX6 plasmid, designated pGN2-KPC, pGN26-KPC, pGN28-KPC, and pE20-KPC, respectively. These plasmids were 45.6–46.3 kb in length, with 62–65 predicted ORFs (Table 1). The modular structure of each plasmid was divided into the backbone regions along with a single accessory module, which was defined as an acquired DNA region associated with mobile elements, and was inserted into the backbone (Figure 1 and Supplementary Figure S1). A total of three resistance genes were identified: blaKPC-2 was located in all four plasmids, while ΔblaTEM-1 was identified in pGN2-KPC, pGN26-KPC, and pGN28-KPC, and qnrS1 was found in pGN26-KPC. All these resistance genes were located in the accessory modules.

FIGURE 1. Linear comparison of IncX6 plasmids. Genes are denoted by arrows. Genes, mobile elements and other features are colored based on function classification. Shading denotes regions of homology (>95% nucleotide identity).

All four blaKPC-2-carrying plasmids could be transferred to E. coli EC600 via conjugation, generating the corresponding blaKPC-positive E. coli transconjugants GN2-KPC-EC600, GN26-KPC-EC600, GN28-KPC-EC600, and E20-KPC-EC600. Class A carbapenemase activity was detected for all transconjugants, and resulted from the production of the KPC-2 enzyme. Both the wild-type and transconjugant strains were resistant to ampicillin, cefepime, meropenem, and aztreonam. Moreover, GN26 was resistant to ciprofloxacin, but its transconjugant was intermediately resistant to this drug due to the presence of qnrS1 known to mediate the low-level resistance to fluoroquinolones (Table 2). In conclusion, each of GN2, GN26, GN28, and E20 harbored a conjugative blaKPC-carrying IncX6 plasmid, which accounted for the carbapenem resistance phenotype.

Based on the complete sequences of the five IncX6 plasmids (pGN2-KPC, pGN26-KPC, pGN28-KPC, pE20-KPC, and pKPC3_SZ), a total of nine genes were arbitrarily selected to screen for the prevalence of pKPC3_SZ-like IncX6 plasmids among the 45 blaKPC-positive isolates. Of these nine selected genes, eight [replication initiation: repA (replication initiation protein); maintenance: parA (partitioning ATPase), topB (type III topoisomerase), dnaJ (molecular chaperone), and ftsH (cell division protein); conjugal transfer: tivB3-4 (P-type type IV secretion, inner-membrane component of translocation channel and ATPase), tivB6 (P-type type IV secretion, inner-membrane component of translocation channel), and tivB10 (P-type type IV secretion, outer-membrane component of translocation channel)] were from backbone regions, while the remaining one was quinolone-resistance gene qnrS1. PCR analysis and amplicon sequencing showed that all eight backbone genes were present in 24 isolates, including 11 K. pneumoniae isolates, all 6 K. aerogenes isolates, 4 S. marcescens isolates, and 1 isolate each of M. morganii, E. coli, and P. mirabilis, indicating that these isolates harbored IncX6 plasmids. All five replication and maintenance genes, but none of the three conjugal transfer genes, were detected in another S. marcescens isolate, probably indicating that this isolate contained an IncX6 plasmid that had lost the conjugal transfer genes. None of the eight selected genes were detected in the remaining 20 isolates, signifying that these isolates did not carry IncX6 plasmids. qnrS1 was detected in 26 K. pneumoniae isolates, 6 K. aerogenes isolates, and 4 S. marcescens isolates, denoting coexistence of blaKPC and qnrS1 in these isolates.

The backbones of these five plasmids displayed only two major modular differences (Figure 1): (i) a 128-bp duplication in cpl of pGN2-KPC resulted in frameshift mutation, turning cpl into a pseudogene but retaining the conjugal transfer ability of pGN2-KPC, and (ii) a 71-bp deletion within orf393 (coding for an XRE-family Helix-turn-helix protein) was identified in pGN28-KPC, again causing the hypothetical gene orf393 to become a pseudogene. 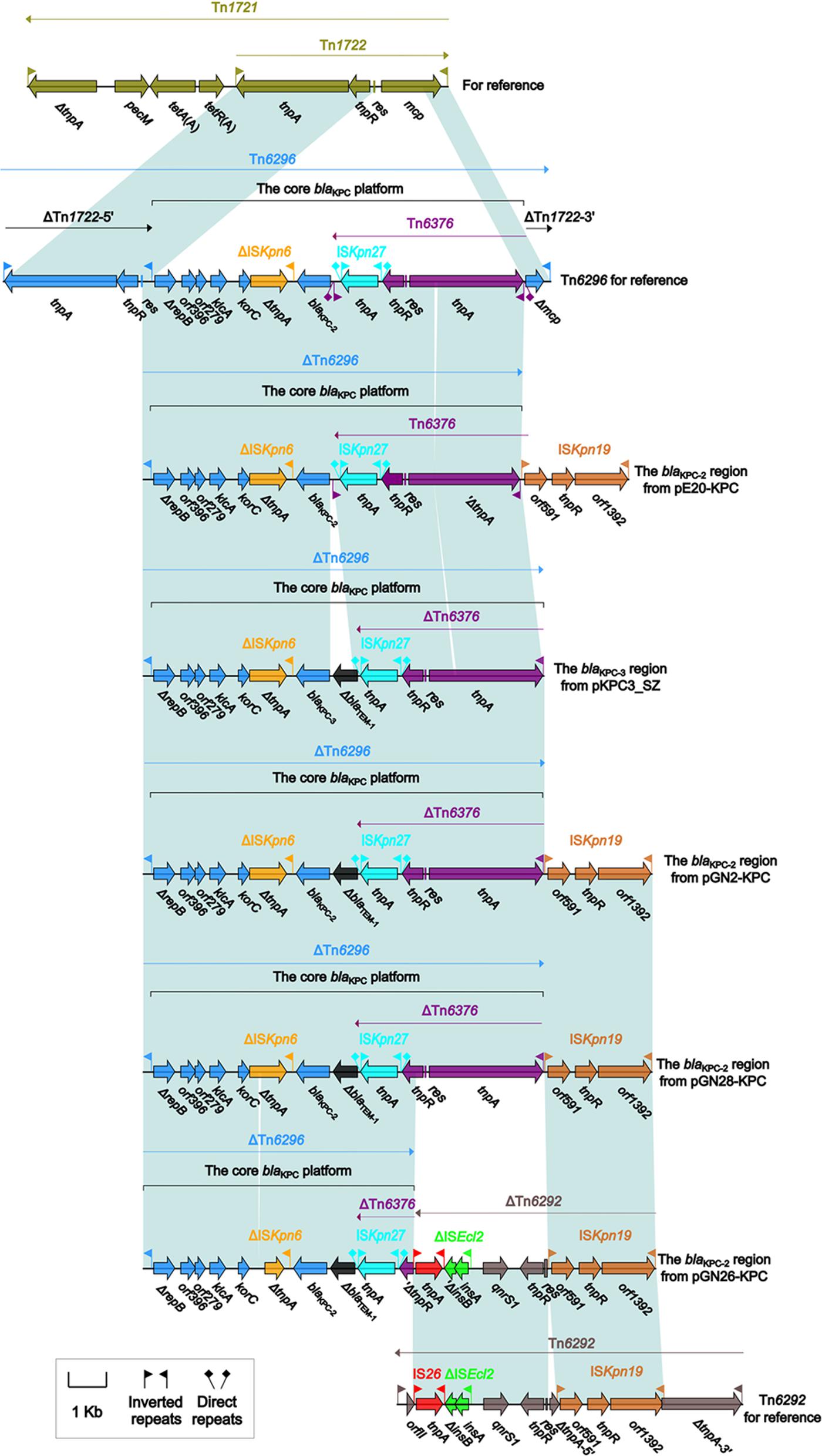 FIGURE 2. The blaKPC regions from IncX6 plasmids, and comparison with related regions. Genes are denoted by arrows. Genes, mobile elements, and other features are colored based on function classification. Shading denotes regions of homology (>95% nucleotide identity).

The ΔTn6296 derivatives from these five plasmids were slightly different from each other, with deletions and insertions relative to the prototype Tn6296 (Figure 2 and Supplementary Table S2). First, ΔTn1722-5′ was lost from all five ΔTn6296 elements. Second, a 70-bp deletion within tnpA of Tn6376 and a 70-bp deletion within ΔtnpA of ΔISKpn6 were found in pE20-KPC and pGN26-KPC, respectively, leading to frameshift mutations of these two coding regions. Third, the insertion of a 624-bp ΔblaTEM-1-containing region between ISKpn27 and blaKPC-2/3 was identified in pGN26-KPC, pGN2-KPC, pGN28-KPC, and pKPC3_SZ. Two promoters, consisting of the intrinsic P1 promoter and an upstream Tn6376-provided P2 promoter, were found to govern the blaKPC-2 expression of Tn6296 (Wang et al., 2015). The insertion of the ΔblaTEM-1-containing region resulted in the loss of IRLTn6376 and P1 (Supplementary Figure S2), leaving P2 as the only promoter for blaKPC expression. Finally, the 3′-terminal regions of these five ΔTn6296 derivatives were truncated in different formats: (i) ΔTn1722-3′ was absent in each of pE20-KPC, pGN2-KPC, and pGN28-KPC due to connection of ISKpn19; (ii) in pGN26-KPC, the qnrS1-containing ΔTn6292 element (6.4 kb in length) was connected with a 1.6-kb ΔTn6376 remnant with deletion of IRL–tnpA–res and truncation of tnpR, and the introduction of ΔTn6292 into pGN26-KPC probably resulted from homologous recombination between Tn6292 and a pre-existing ISKpn19 element (as observed in pE20-KPC, pGN2-KPC, and pGN28-KPC), with ISKpn19 acting as the common region necessary for recombination; and (iii) ΔTn1722-3’ was also lost in pKPC3_SZ, although none of the ISKpn19-related elements or any other regions were found to be adjacent to the 3′-end of ΔTn6296.

In summary, complex transposition and homologous recombination events, particularly those involving the three prototype mobile elements Tn6296, Tn6292, and ISKpn19, occurred to promote the assembly and mobilization of the blaKPC regions in these plasmids.

Previously sequenced IncX plasmids mostly belong to the IncX1–IncX4 subgroups, with very few representatives of IncX5–IncX7 plasmids. Currently, only five IncX6 plasmids have been fully sequenced, including pKPC3_SZ (Du et al., 2016) and the pGN2-KPC, pGN26-KPC, pGN28-KPC, and pE20-KPC plasmids sequenced in the current study. The five plasmids all originate from clinical isolates belonging to different Enterobacteriaceae species, namely E. cloacae, P. mirabilis, S. marcescens, M. morganii, and K. aerogenes, respectively, all of which come from China. Each of these five IncX6 plasmids contains a single accessory module containing two or three resistance genes, with all five carrying blaKPC-2/3, pKPC3_SZ, pGN2-KPC, and pGN28-KPC harboring ΔblaTEM-1, and pGN26-KPC containing both ΔblaTEM-1 and qnrS1. None of these IncX6 plasmids encodes multi-drug resistance. IncX6 plasmids appear to be an important vehicle for blaKPC genes in China, and the core genetic environments of blaKPC genes are close derivatives of Tn6296.

Genomic and epidemiological analyses herein show that blaKPC-carrying IncX6 plasmids are present in 44.4% of the analyzed blaKPC-positive isolates from a single hospital and have disseminated among at least six different Enterobacteriaceae species from six distinct departments of this hospital, indicating wide spread of these plasmids in this hospital. Further studies are needed to determine the prevalence of IncX6 plasmids among various geographic areas to understand the contribution of IncX6 plasmids to blaKPC epidemiology among Enterobacteriaceae isolates.

The Supplementary Material for this article can be found online at: https://www.frontiersin.org/articles/10.3389/fmicb.2018.00478/full#supplementary-material

FIGURE S2 | Alignment of promoter-proximal regions of blaKPC-2. The 898–354 bp upstream sequences together with the start codon of the blaKPC-2 genes from IncX6 plasmids and Tn6296 are aligned by MUSCLE. Shown are core promoter regions, -35 and -10 elements, transcription starts, Shine-Dalgarno (SD) sequences for ribosome recognition and translation starts.

Nederbragt, A. J. (2014). On the middle ground between open source and commercial software - the case of the Newbler program. Genome Biol. 15:113.

Copyright © 2018 Li, Feng, Zhan, Yin, Jiang, Wei, Chen, Gao, Hou, Mao, Wu, Chen, Tong, Wang, Li and Zhou. This is an open-access article distributed under the terms of the Creative Commons Attribution License (CC BY). The use, distribution or reproduction in other forums is permitted, provided the original author(s) and the copyright owner are credited and that the original publication in this journal is cited, in accordance with accepted academic practice. No use, distribution or reproduction is permitted which does not comply with these terms.