Azole-Resistance in Aspergillus terreus and Related Species: An Emerging Problem or a Rare Phenomenon?

Objectives: Invasive mold infections associated with Aspergillus species are a significant cause of mortality in immunocompromised patients. The most frequently occurring aetiological pathogens are members of the Aspergillus section Fumigati followed by members of the section Terrei. The frequency of Aspergillus terreus and related (cryptic) species in clinical specimens, as well as the percentage of azole-resistant strains remains to be studied.

Methods: A global set (n = 498) of A. terreus and phenotypically related isolates was molecularly identified (beta-tubulin), tested for antifungal susceptibility against posaconazole, voriconazole, and itraconazole, and resistant phenotypes were correlated with point mutations in the cyp51A gene.

Results: The majority of isolates was identified as A. terreus (86.8%), followed by A. citrinoterreus (8.4%), A. hortai (2.6%), A. alabamensis (1.6%), A. neoafricanus (0.2%), and A. floccosus (0.2%). One isolate failed to match a known Aspergillus sp., but was found most closely related to A. alabamensis. According to EUCAST clinical breakpoints azole resistance was detected in 5.4% of all tested isolates, 6.2% of A. terreus sensu stricto (s.s.) were posaconazole-resistant. Posaconazole resistance differed geographically and ranged from 0% in the Czech Republic, Greece, and Turkey to 13.7% in Germany. In contrast, azole resistance among cryptic species was rare 2 out of 66 isolates and was observed only in one A. citrinoterreus and one A. alabamensis isolate. The most affected amino acid position of the Cyp51A gene correlating with the posaconazole resistant phenotype was M217, which was found in the variation M217T and M217V.

In the last decade, the taxonomy and nomenclature of the previously morphologically defined genus Aspergillus changed, mainly due to comprehensive molecular phylogenetic studies and the introduction of the single name nomenclature (Samson et al., 2011, 2014; Alastruey-Izquierdo et al., 2013). With the introduction of molecular identification methods morphologically similar species were split into several cryptic species (Balajee et al., 2009a,b; Samson et al., 2011; Gautier et al., 2014). Samson et al. (2011) recognized 13 species in section Terrei: A. terreus sensu stricto (s.s.), A. alabamensis, A. allahabadii, A. ambiguus, A. aureoterreus, A. carneus, A. floccosus, A. hortai, A. microcysticus, A. neoafricanus, A. neoindicus, A. niveus, and A. pseudoterreus. In 2015, Guinea et al. (2015) described A. citrinoterreus as a new species of the section Terrei and subsequently A. bicephalus and A. iranicus were introduced (Arzanlou et al., 2016; Crous et al., 2016), resulting in a total of 16 accepted species.

Aspergillus terreus s.s., an important cause of fungal infections in immunocompromised patients, is reported as second or third most common pathogen of invasive aspergillosis (Baddley et al., 2003; Lass-Flörl et al., 2005; Blum et al., 2008). Treatment of infections caused by A. terreus s.s. and other section Terrei species (Walsh et al., 2003; Risslegger et al., 2017) may be difficult because of intrinsic amphotericin B resistance (Sutton et al., 1999; Escribano et al., 2012; Hachem et al., 2014; Risslegger et al., 2017). In addition, the emergence of A. terreus sensu lato (s.l.) isolates with reduced azole-susceptibility was reported (Arendrup et al., 2012; Won et al., 2017). Azole resistance in A. terreus s.s. and A. fumigatus is associated with mutations and alterations of the lanosterol-14-α steroldemethylase gene (Cyp51A), a key protein in the ergosterol biosynthesis pathway (Chowdhary et al., 2015, 2017). However, aside from mutations in the primary target gene, also other less known mechanisms (e.g., efflux pumps, overexpression of cyp51) were found to be involved in azole resistance (Arendrup, 2014; Rivero-Menendez et al., 2016).

The aim of this study was to evaluate the frequency of A. terreus s.s. and phenotypically similar (cryptic) species in a global set of clinical isolates and to screen for the presence of azole resistance.

During an international A. terreus survey (Risslegger et al., 2017) various A. terreus sensu lato (s.l.) isolates were sent to and collected at the Medical University of Innsbruck by members of the ISHAM-ECMM-EFISG TerrNet Study group (www.isham.org/working-groups/aspergillus-terreus). Isolates were from Europe (n = 390), Middle East (n = 70), South America (n = 10), North America (n = 7), and South Asia (n = 19). A total of 498 strains, including isolates collected in Innsbruck within the last years, were analyzed (Supplementary Figure S1 and Supplementary Table S1), 495 were of clinical and 3 of environmental origin. For two isolates, the source is unknown. Isolates were cultured on Sabouraud's agar (Becton Dickinson, France), incubated at 37°C and stored in Sabouraud's broth with glycerin at −20°C.

Susceptibility to itraconazole, posaconazole, and voriconazole was determined by using reference broth microdilution according to EUCAST (www.EUCAST.org) and ETest® (bioMérieux, France). ETest® MICs were rounded to the next higher EUCAST concentrations and isolates displaying high MICs (≥0.25 mg/L for posaconazole, ≥2.0 mg/L for each, voriconazole and itraconazole) with ETest® were evaluated according to EUCAST. MIC50 and MIC90 were calculated for all studied section Terrei strains and each individual species. EUCAST clinical breakpoints (CBP) for Aspergillus fumigatus (see Table 3) were applied for wild typ and non-wildtyp categorization, as CBP for Aspergillus terreus are not available.

Azole-resistant isolates (Table 3) and a control set of susceptible isolates (Supplementary Table S2) underwent Cyp51A sequencing. Cyp51A genes were amplified by PCR, using KAPA2G Robust HotStart ReadyMix PCR Kit (Kapa Biosystems, USA) and in-house designed primers described by Arendrup et al. (2012). In short, PCR conditions were as follows: initial denaturation at 95°C for 5 min, followed by 35 cycles of 95°C for 1 min, 58°C for 1 min, 72°C for 2 min 30 s, and a final elongation step of 72°C for 10 min. Primers used for Cyp51A sequencing are provided in Supplementary Table S3. PCR products were cleaned with ExoSAP-IT and for sequencing the BigDye XTerminator purification kit was used. Sequencing was performed with the 3500 Genetic Analyzer and data were analyzed with Bionumerics 6.6. Software and Geneious 8 (Biomatters Limited).

The present study analyzed a large number of isolates (n = 498) collected from Europe, Middle East, South America, North America, and South Asia (Supplementary Table S1 and Supplementary Figure S2) and identified A. terreus (n = 432), A. citrinoterreus (n = 42), A. alabamensis (n = 8), A. hortai (n = 13), A. floccosus (n = 1), and A. neoafricanus (n = 1). As previously reported (Risslegger et al., 2017) one isolate failed to be associated with any existing species, but clustered most closely to A. alabamensis (Supplementary Figure S1).

Our study showed limitations due to the unknown source and date of some clinical isolates. A differentiation between isolates from superficial and deep seeded infections was not made, therefore, source-variable resistance rates cannot be excluded. Number of studied isolates varied per country and might also introduce a bias to resistance rates.

Aspergillus terreus s.s. was the most prevalent species (86.8%), followed by A. citrinoterreus (8.4%), A. hortai (2.6%), and A. alabamensis (1.6%). This is in agreement with other authors (Balajee et al., 2009a; Neal et al., 2011; Escribano et al., 2012; Kathuria et al., 2015) showing that A. terreus s.s. is the most common species of section Terrei in clinical and environmental samples. In addition, we detected A. floccosus and A. neoafricanus. We did not identify A. allahabadii, A. ambiguus, A. aureoterreus, A. bicephalus, A. carneus, A. iranicus, A. microcysticus, A. neoindicus, A. niveus, and A. pseudoterreus. The reason for this might be that these species are less common in clinical samples and the environment. Our species distribution is in line with Kathuria et al. (2015), who reported for the first time a probable invasive aspergillosis and aspergilloma case due to A. hortai, which was found to occur in a prevalance of 1.4% of all section Terrei isolates. A multicenter study by Balajee et al. (2009a) observed a high frequency (33% of all clinical A. terreus s.l. isolates were A. alabamensis) of A. alabamensis. Other studies (Neal et al., 2011; Gautier et al., 2014; Risslegger et al., 2017) reported a lower prevalence of A. alabamensis isolates (up to 4.3%). 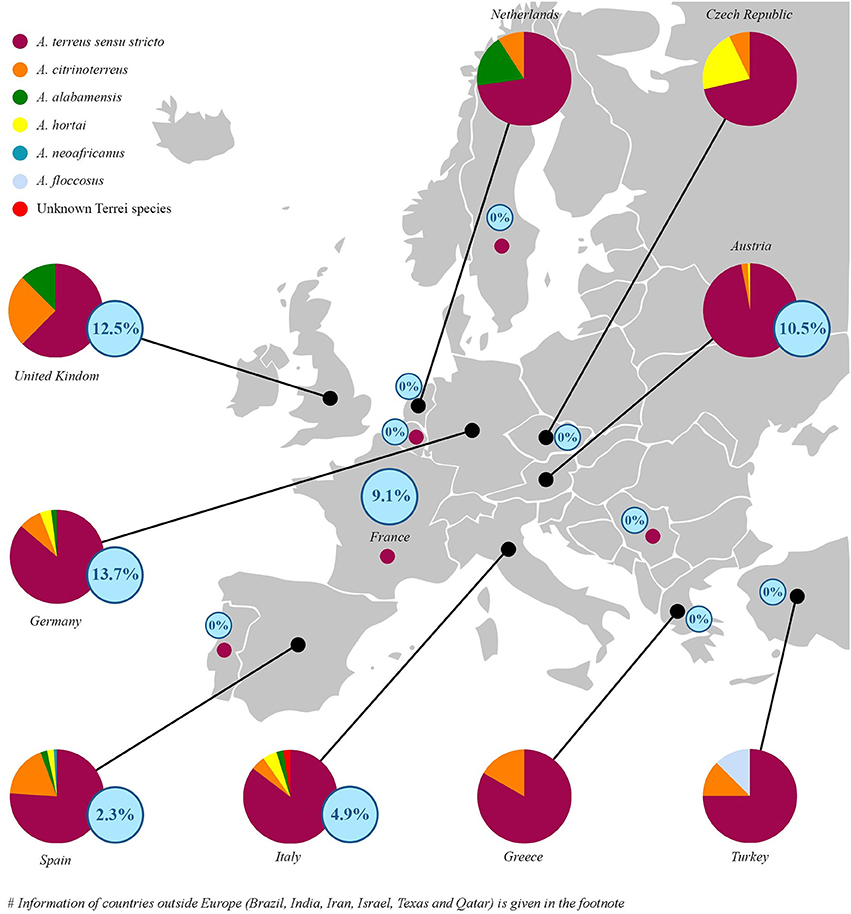 Table 1. Clinical breakpoints according to EUCAST1. 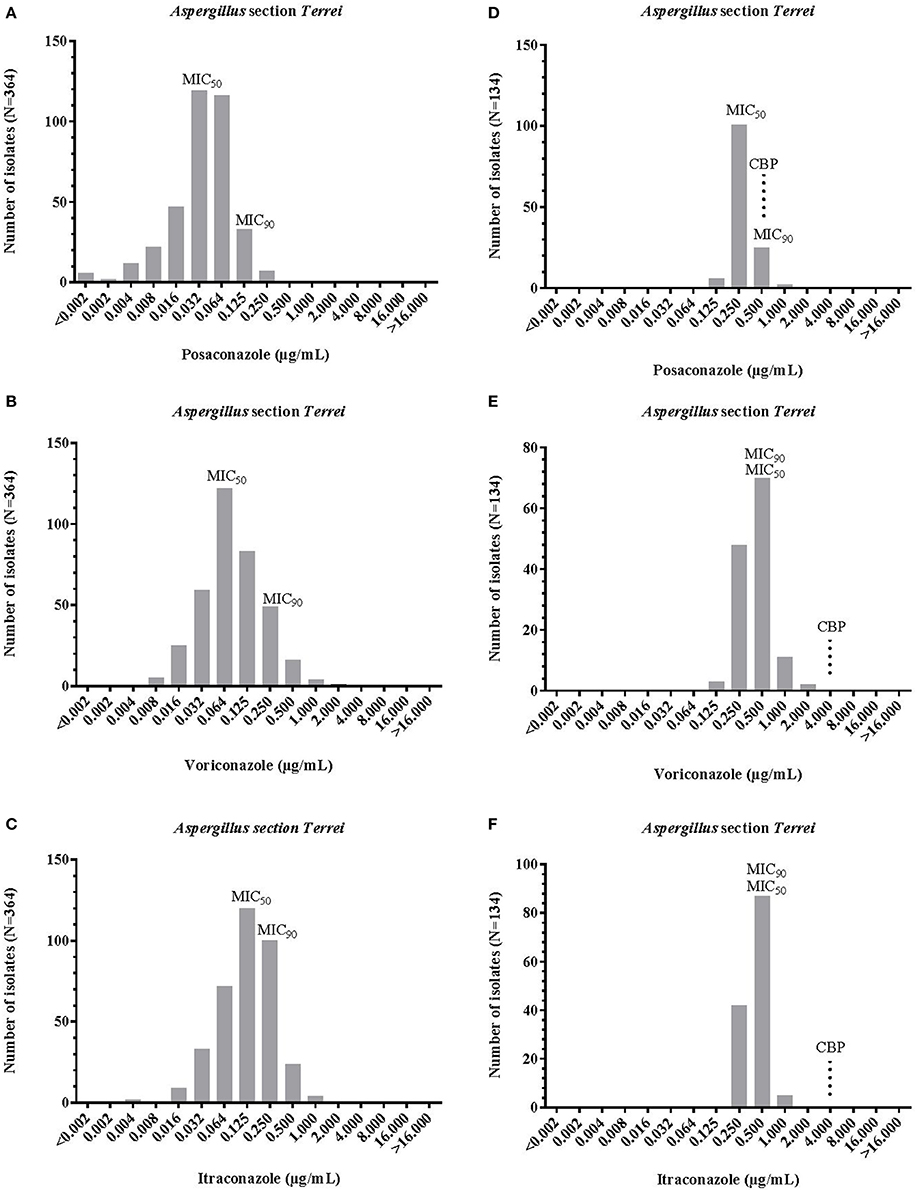 According to EUCAST breakpoints 5.4% of all section Terrei isolates are posaconazole resistant. This is a relatively high frequency in comparison to A. fumigatus. A prospective multicenter international surveillance study (van der Linden et al., 2015) showed a prevalence of azole-resistance of 3.2% in A. fumigatus. As shown in Table 3, only mono-azole resistance was observed (posaconazole, MICs ranged from 0.500 to 1.000 μg/mL). Azole resistance was more frequently observed among A. terreus s.s. isolates and was rare among cryptic species. One A. citrinoterreus isolate was resistant against posaconazole (0.500 μg/mL). Posaconazole resistant strains were detected from Germany (13.7%) followed by the United Kingdom (12.5%), Austria (10.5%), France (9.1%), Italy (4.9%), and Spain (2.3%) (Tables 3, 4 and Figure 1). In Turkey, Greece, Serbia, Iran, Israel, India, Brazil, Texas, and Qatar all isolates were susceptible against all azoles tested. However, resistance rates per countries might be influenced by multiple factors such as specimen handling and sampling, and investigated patient cohorts. 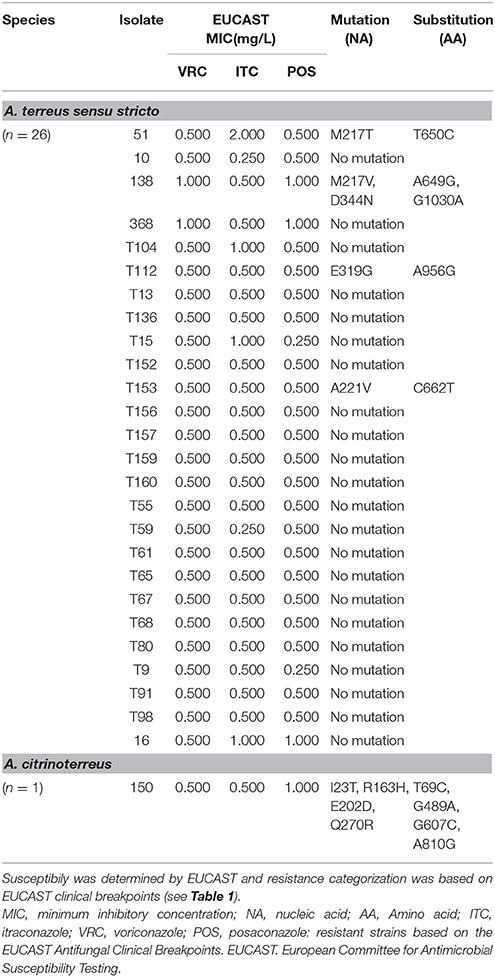 Table 3. Summary of mutations detected in azole-resistant A. terreus and A. citrinoterreus. 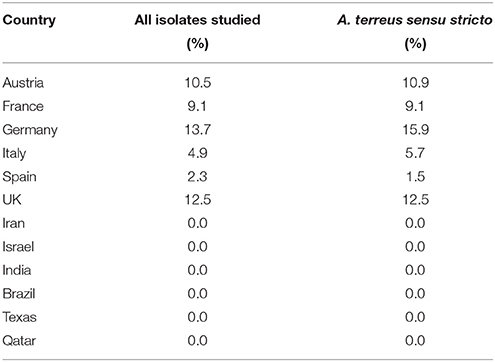 Table 4. Posaconazole resistance per country relative to (1) all studied isolates and (2) A. terreus s.s. only (also see Figure 1).

SNPs in the Cyp51A Gene

Mutations at the position M217 were reported to be associated with reduced susceptibility against itraconazole (MICs of 1.0–2.0 μg/mL), voriconazole (MICs of 1.0–4.0 μg/mL), and posaconazole (MICs of 0.25–0.5 μg/mL) (Arendrup et al., 2012), however the substituting amino acids varied from the one found in our study. Our isolates carried the mutations M217T (nucleic acid change T650C) or M217V (nucleic acid change A649G) (Table 3) and were exclusively resistant against posaconazole, when applying the EUCAST clinical breakpoints. Strains carrying the point mutation M217I in the study from Arendrup et al. (2012) were isolated from cystic fibrosis patients receiving long-term azole therapy and showed a pan-azole resistant phenotype. Another posaconazole resistant isolate (T153) carried an amino acid substitution at position A221V, a mutation, which was also previously reported by Arendrup et al. (2010), but was not associated with posaconazole resistance. Hence, functional studies in mutant strains are needed to evaluate the role of the mutations M217V, M217I, M217T, and A221V, which are all located in close proximity to the hot spot mutation M220I of A. fumigatus. Understanding the impact of mutations at the position M217 on the protein folding pattern and subsequently on binding capacities of azoles is the key to evaluate its role as azole-resistance markers. Other hotspot mutations, which were linked to acquired azole-resistance in A. fumigatus, are G54, L98, and M220 (Arendrup et al., 2010). None of them were found in our resistant isolates, suggesting different mechanisms of acquired azole-resistance than in A. fumigatus. The role of the other coding mutations within A. terreus s.s. isolates E19G (nucleic acid substitution A956G) and D344N (nucleic acid substitution C662T) remains to be studied. Voriconazole resistant A. citrinoterreus carried the amino acid changes I23T, R163H, E202D, Q270R (Table 3), which need to be analyzed in detail.

This work was supported by ECMM, ISHAM, and EFISG and in part by an unrestricted research grant through the Investigator Initiated Studies Program of Astellas, MSD, and Pfizer. This study was fundet by the Christian Doppler Laboratory for invasive fungal infections.

The Supplementary Material for this article can be found online at: https://www.frontiersin.org/articles/10.3389/fmicb.2018.00516/full#supplementary-material