The Rapid Emergence of Tigecycline Resistance in blaKPC–2 Harboring Klebsiella pneumoniae, as Mediated in Vivo by Mutation in tetA During Tigecycline Treatment

Tigecycline is one of the last resort treatments for carbapenem-resistant Klebsiella pneumoniae (CRKP) infections. Tigecycline resistance often occurs during the clinical treatment of CRKP, yet its mechanism has still not been clearly elucidated. This study presents an analysis of a tigecycline resistance mechanism that developed in clinical isolates from a 56-year-old female patient infected with CRKP during tigecycline treatment. Consecutive clonal consistent K. pneumoniae isolates were obtained during tigecycline treatment. Whole genome sequencing of the isolates was performed, and putative single nucleotide polymorphisms and insertion and deletion mutations were analyzed in susceptible and resistant isolates. The identified gene of interest was examined through experiments involving transformations and conjugations. Four isolates, two of which were susceptible and two resistant, were collected from the patient. All of the isolates belonged to Sequence Type 11 (ST11) and were classified as extensively drug resistant (XDR). One amino acid substitution S251A in TetA was identified in the tigecycline-resistant isolates. Subsequent transformation experiments confirmed the contribution of the TetA variant (S251A) to tigecycline resistance. The transfer capacity of tigecycline resistance via this mutation was confirmed by conjugation experiments. Using southern blot hybridization and PCR assays, we further proved that the tetA gene was located on a transferable plasmid of ca. 65 kb in an Escherichia coli EC600 transconjugant. Our results provide direct in vivo evidence that evolution in the tetA gene can lead to tigecycline treatment failure in CRKP clinical strains that carry tetA. Moreover, the transfer capacity of tigecycline resistance mediated by mutated tetA is a threat.

Tigecycline is one of the last treatment options remaining for carbapenem-resistant Enterobacteriaceae (Alhashem et al., 2017; Iovleva and Doi, 2017). A semisynthetic derivative of minocycline, tigecycline is a recent antibiotic that belongs to the glycylcycline class and can overcome the mechanisms of tetracycline resistance (Pankey, 2005). Tigecycline is effective against most carbapenemase-producing bacteria, including K. pneumoniae, and has been approved in recent years for clinical use in China (He et al., 2015). However, resistance to tigecycline has emerged since its approval (Hoban et al., 2005). The mechanism for tigecycline resistance has not yet been clearly elucidated. In Gram-negative bacteria, the enhanced expression of resistance–nodulation–cell division (RND)-type efflux pumps was associated with decreased tigecycline susceptibility (Osei Sekyere et al., 2016). Over-expression of the RND efflux pumps, AcrAB and OqxAB, is one of the mechanisms reported most frequently in the Enterobacteriaceae species, and several global transcriptional regulators of the AraC family, namely, RamA, MarA, SoxS, and RarA, participate in tigecycline resistance via efflux pump activation (Ruzin et al., 2005; Bratu et al., 2009; Veleba and Schneiders, 2012; Veleba et al., 2012). Nielsen et al. (2014) also reported a new efflux pump operon, kpgABC, and identified an insertion element whose presence correlated with the in vivo development of tigecycline non-susceptibility in K. pneumoniae. The ribosomal S10 protein is also a general target (via the mutation of rpsJ) that has been described for its ability to cause decreased tigecycline susceptibility in both Gram-negative and Gram-positive bacteria (Cannatelli et al., 2014; Beabout et al., 2015).

In this study, consecutive clonal consistent K. pneumoniae isolates were collected from a 56-year-old female patient with duodenal papillary carcinoma who was undergoing tigecycline treatment. In the early stages of her tigecycline treatment, the isolates were susceptible to tigecycline (MIC = 1 mg/L); 13 days later, we isolated the first resistant strain with a tigecycline MIC of 32 mg/L. To the best of our knowledge, this study is the first report to present consecutive clonal consistent K. pneumoniae isolates while they evolved high-level resistance to tigecycline during in vivo treatment. Whole genome sequencing (WGS) of these isolates was completed using the Illumina HiSeq X Ten platform, and subsequent bioinformatics analyses were performed to explore the tigecycline resistance mechanism of these isolates.

The Patient and Isolates

A 56-year-old female patient was diagnosed with duodenal papillary carcinoma and admitted to the hospital for a Whipple operation. Following surgery, the patient contracted an abdominal infection. Initially, the patient received multiple antimicrobial treatments, including cefotaxime, levofloxacin, and imipenem. Isolates were cultured from the patient during her hospitalization. KPC-2 producing extensively drug resistant (XDR) K. pneumoniae susceptible only to colistin and tigecycline were isolated from both blood and ascites samples 23 days subsequent to the Whipple surgery. The antibiotic therapeutic strategy was then adjusted to that of intravenous tigecycline (a 100 mg loading dose followed by 50 mg every 12 h). Thirteen days later, the first tigecycline-resistant isolate was detected from an ascites sample (QJJ49) with a tigecycline MIC of 32 mg/L; 19 days later, another tigecycline resistant isolate was detected from a blood sample (QJJ51) with a tigecycline MIC of 32 mg/L. Tigecycline therapy lasted for 19 days, until the resistant phenotype appeared. At the end of the treatment period, the patient expired from multiple organ dysfunction syndrome (MODS).

All of the isolates were preliminarily identified using the VITEK 2 system (bioMérieux, France) and were further confirmed by 16S rRNA gene sequencing. Multilocus sequence typing (MLST) of the isolate was analyzed using the BacWGSTdb server with the entire genome sequence (Ruan and Feng, 2016).

The MICs of tigecycline and colistin were determined using standard broth microdilution tests with fresh (<12 h) Mueller–Hinton broth (Cation-adjusted, Oxoid LTD, Basingstoke, Hampshire, England). E. coli ATCC 25922 was used for quality control (He et al., 2015). The MICs of other antimicrobial agents were determined using the Etest method. All tests were performed according to the guidelines of the Clinical and Laboratory Standards Institute (CLSI). Antimicrobial susceptibility was determined using the breakpoints approved by the CLSI, with the U.S. Food and Drug Administration (FDA) breakpoints used for tigecycline (≤2.0 mg/L, susceptible; 4.0 mg/L, intermediate; and ≥8.0 mg/L, resistant).

The genomic sequence of the initial isolate QJJ29 was used as the reference genome. The reads from the other isolates were mapped against this reference genome using CLC Genomics Workbench 9 software. Basic variants such as single nucleotide polymorphisms (SNPs) and insertion and deletion mutations were predicted by CLC software and the potential mutations were confirmed by PCR and Sanger sequencing with the primers listed in Supplementary Table S1. Potential large fragment insertions were also searched by CLC software, but not verified by PCR and sequencing.

DNA fragments carrying the wild-type tetA and mutated tetA genes were amplified from the tigecycline-susceptible isolate QJJ29 and the tigecycline-resistant isolate QJJ51, respectively, with the primers listed in Supplementary Table S1. Following amplification, the amplimer was cloned into plasmid pCR2.1 (Invitrogen, United States) behind the T7 promoter. E. coli ATCC 25922 was used for transformation. The effect of the tetA mutation on the tigecycline MIC was examined using standard broth microdilution tests.

The transfer capacity of tigecycline resistance was investigated by conjugation experiments (Fu et al., 2012). We used the rifampicin-resistant E. coli EC600 as a recipient and the rifampicin-susceptible isolates QJJ29 and QJJ51 as donors. Transconjugants were selected on MH agar plates supplemented with tetracycline (32 mg/L) and rifampicin (800 mg/L). The tigecycline MIC of the transconjugants was examined using standard broth microdilution tests. The tetA gene was analyzed in the EC600 transconjugants by PCR and Sanger sequencing with the primers tetA-Com-F and tetA-Com-R (Supplementary Table S1).

Genomic DNA was digested with the S1 enzyme following the protocol of Barton et al. (1995).

The DNA fragments were transferred to a positively charged nylon membrane (Millipore, United States), hybridized with a DIG-labeled specific probe and detected with an NBT/BCIP color detection kit (Roche, Germany). The hybridization probe was designed to bind within the middle portion of the tetA gene and was synthesized using the primers listed in Supplementary Table S1. 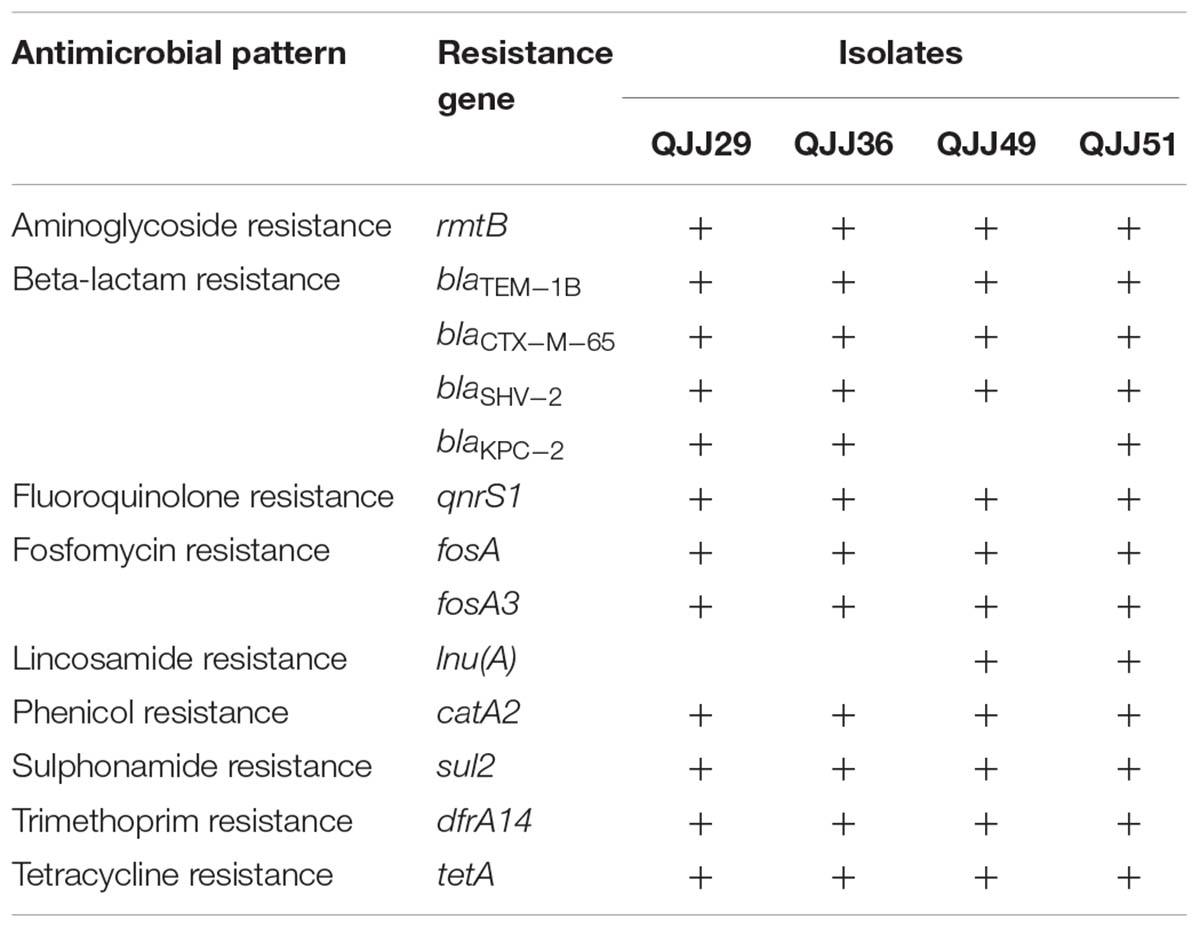 Effects of the tetA Mutation on Tigecycline Resistance 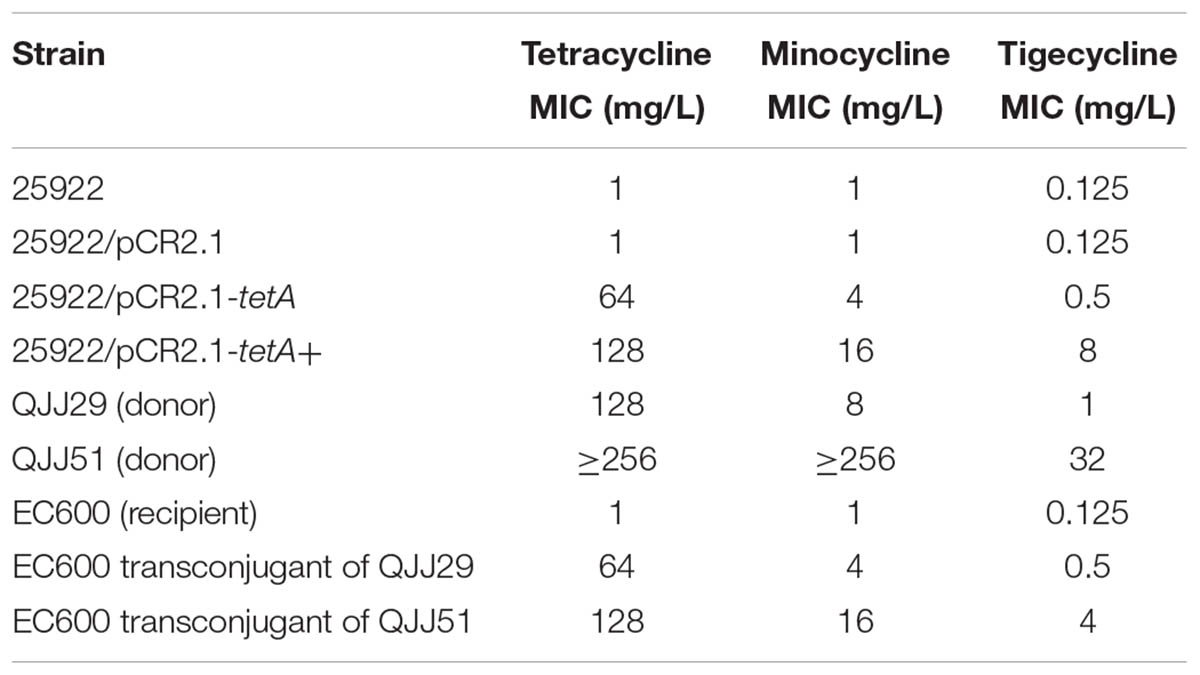 TABLE 4. Changes in the tetracycline, minocycline, and tigecycline MICs during the transformation and conjugation experiments.

Conjugation of the Tigecycline Resistance Factor

The tetA gene was determined to be transferred by conjugation by southern blot hybridization and PCR assays. The tetA gene was located on a transferable plasmid with a size of ca. 65 kb in all the isolates detected (Figure 1). From the PCR and Sanger sequencing results, the EC600 transconjugant of QJJ51 harbored the same mutant-type tetA gene as isolate QJJ51. 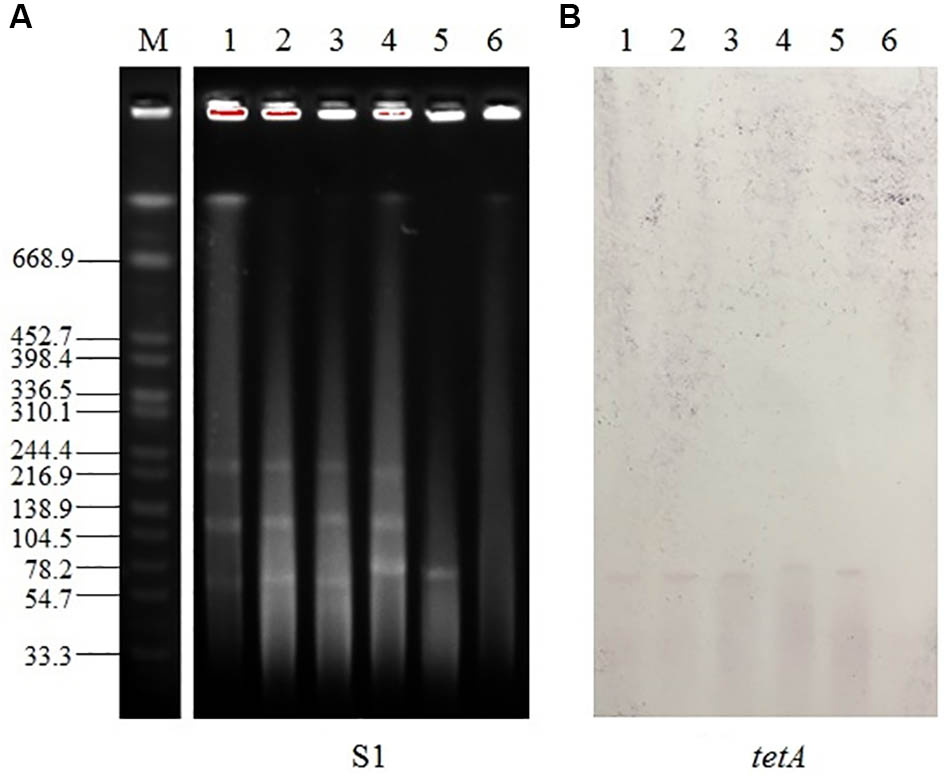 Over-expression of RND efflux pumps and mutations in the ribosomal S10 protein (rpsJ) have been the widely accepted mechanisms that result in decreased tigecycline susceptibility in K. pneumoniae (Ruzin et al., 2005, 2008; Bratu et al., 2009; Roy et al., 2013; Villa et al., 2014; Beabout et al., 2015; He et al., 2015). However, the tigecycline resistant isolates (QJJ49 and QJJ51) collected in this study had neither over-expressed RND efflux pumps AcrAB and OqxAB (the expression levels of the efflux pump genes were detected by qRT-PCR, Supplementary Table S3) nor rpsJ gene mutations. One mutation in the tetA gene (S251A) was uncovered through WGS and analysis. Subsequent transformation and conjugation experiments revealed that the tetA mutation was responsible for the development of tigecycline resistance in these isolates.

The wild-type tetA gene was observed to slightly decrease the sensitivity to tigecycline in Salmonella enterica clinical isolates by Akiyama et al. (2013). In our study, transformation of the wild-type tetA gene into E. coli ATCC 25922 increased the tigecycline MIC from 0.125 to 0.5 mg/L (Table 4). This phenomenon coincides with that of Akiyama’s.

Linkevicius et al. (2016) reported that tetA evolution causes decreased sensitivity to tigecycline in E. coli in vitro. They created libraries of mutagenized tetA sequences through separate, error-prone PCR assays, which were then cloned into the pBAD30 vector and electroporated into E. coli NEB5α. Subsequently, the researchers selected 53 independent mutants with elevated tigecycline MICs. The most common amino acid substitution identified was G300E. Other frequent changes were identified more than once in the independent mutants including S251A. In another report, Chiu et al. (2017) also frequently isolated mutated tetA genes in tigecycline-resistant K. pneumoniae.

The current study is the first to provide direct in vivo evidence that changes in the tetA gene can lead to tigecycline treatment failure in patients infected with CRKP clinical strains. Distinct from Linkevicius’s study, we discovered that the S251A mutation resulted in high-level tigecycline resistance in CRKP strains and E. coli ATCC 25922, and their tetracycline and minocycline MICs also increased (Tables 1, 4). Furthermore, our conjugation experiment confirmed the transfer capacity of tigecycline resistance, which was found to be mediated by the mutated tetA through a transferable plasmid of ca. 65 kb. Tigecycline is regarded as a last resort treatment for CRKP infections. This finding serves as a therapeutic warning as the tetA gene is frequently carried by CRKP strains. Under selective pressure from tigecycline, the tetA mutation may occur and lead to treatment failure. This transfer capacity is also a threat to the service life of tigecycline; the more the tetA mutates and evolves toward tigecycline resistance, the more likely it will become a horizontally transferrable resistance gene for tigecycline resistance.

The Supplementary Material for this article can be found online at: https://www.frontiersin.org/articles/10.3389/fmicb.2018.00648/full#supplementary-material

Copyright © 2018 Du, He, Shi, Zhao, Xu, Fu and Yu. This is an open-access article distributed under the terms of the Creative Commons Attribution License (CC BY). The use, distribution or reproduction in other forums is permitted, provided the original author(s) and the copyright owner are credited and that the original publication in this journal is cited, in accordance with accepted academic practice. No use, distribution or reproduction is permitted which does not comply with these terms.