Coral symbiont Symbiodinium, a photosynthetic algae that is a dinoflagellate, plays a central role in the adaptation of corals and the maintenance of coral reefs (Kemp et al., 2014). Consequently, monitoring Symbiodinium compositions and their mutually symbiotic associations with different coral hosts under different environmental stresses is essential to further project the fate of corals and to develop coral reef conservation strategies.

At present, nine Symbiodinium clades (known as clades A–I) have been identified (Pochon et al., 2014). Clades A–D are the main Symbiodinium harbored by corals, and certain other clades, such as F/G, have also been found in corals (Baker, 2003). Within any given clade, different Symbiodinium subclades are mainly identified by the commonly used polymerase chain reaction-denaturing gradient gel electrophoresis (PCR-DGGE) profiles of the less-conserved Symbiodinium internal transcribed spacer region 2 (ITS2) sequence (LaJeunesse et al., 2003). Previous studies have revealed that the environment could influence Symbiodinium compositions, as well as their mutually symbiotic associations with corals, and the breakdown of Symbiodinium-coral associations because of the effects of climate change and anthropogenic disturbance that would contribute to dramatic declines in coral reef cover worldwide (Hughes et al., 2003, 2017; Hoegh-Guldberg et al., 2007). In contrast, certain coral species still maintain highly stable coral-Symbiodinium symbiotic associations over broad geographical ranges and temperature gradients, as well as through bleaching events or after transplantation (LaJeunesse et al., 2004a,b; Stat et al., 2009; Thomas et al., 2014). Therefore, corals might adapt to environmental changes via different mechanisms (Warner et al., 2006). For example, most corals can adapt to environmental changes by changing their symbiont communities, but some corals (most notably the genus Porites) remain common on devastated reefs, even though they fail to change their symbiont communities.

In this study, the dominant coral species of Acropora sp. (scleractinian) and Porites lutea (scleractinian) as well as the three common coral species of G. fascicularis, Platygyra lamellina (scleractinian), and Sarcophyton glaucum (alcyonacea) were sampled from different reef sites across tropical (Sanya Bay-SY, Hainan Island) and subtropical (Xuwen County-XW, Leizhou Peninsula, and/or Daya Bay-DY) reef regions of the SCS. The Symbiodinium compositions in these coral samples in the SY, XW, and DY reef regions were analyzed by next-generation sequencing of Symbiodinium ITS2 region, aiming to elucidate coral-Symbiodinium symbiotic associations across these regions. Furthermore, the relationship of Symbiodinium compositions with environmental factors and host taxa were analyzed. 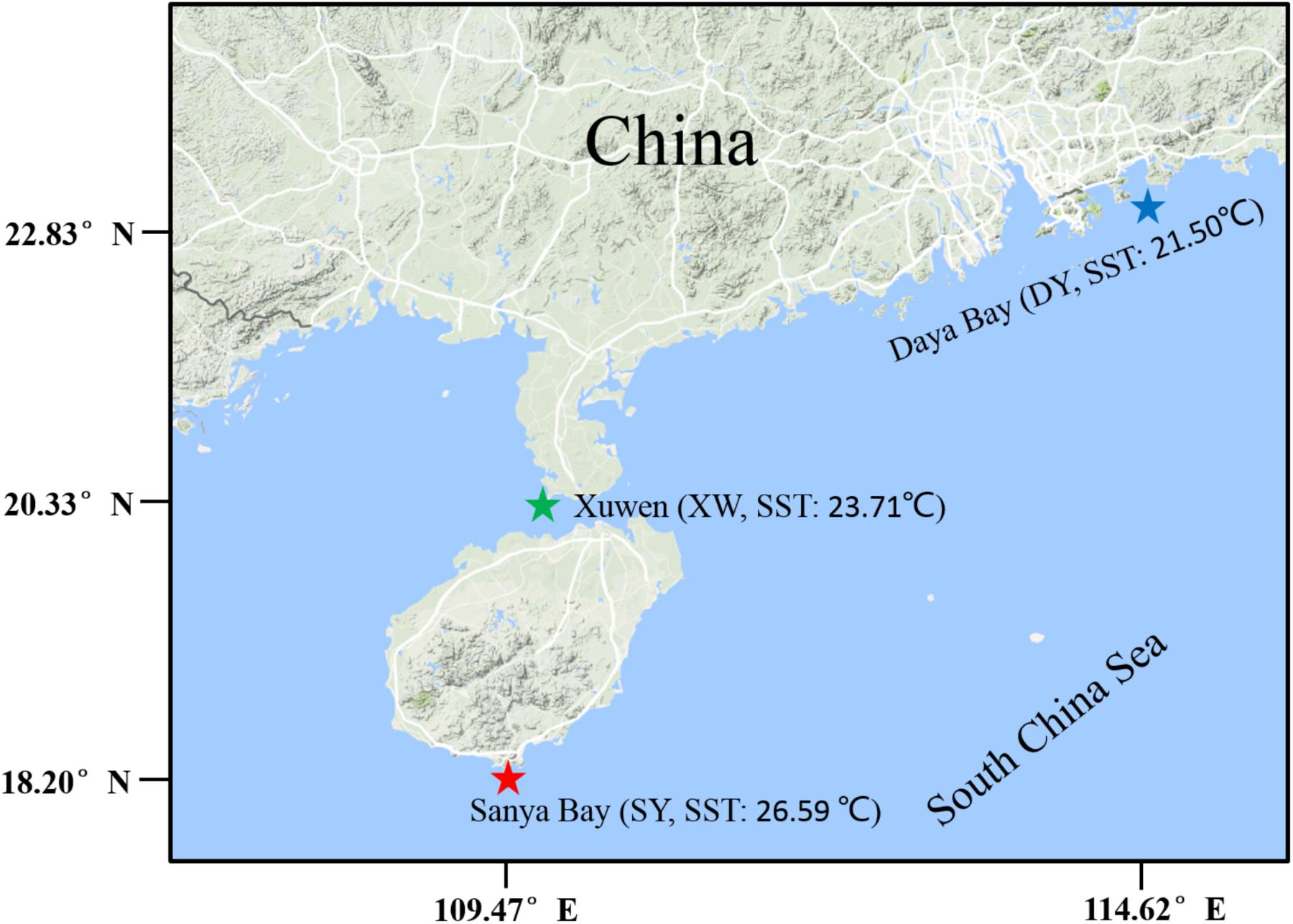 Coral samples of Acropora sp., G. fascicularis, P. lamellina, P. lutea, and S. glaucum were obtained from the SY, XW, and DY reef regions in August and September 2015 (Table 1). These coral samples were identified based on the morphology and a molecular barcode analysis of the cytb gene. The cytb gene was amplified by PCR with previously reported primers for corals (Fukami et al., 2004), and it was cloned into the pEASY’T5 Zero Cloning Vector (Transgene Biotech, Beijing, China). Clone per coral sample was picked up for further Sanger sequencing. An alignment analysis of cytb gene was performed by BLASTN against the NCBI database1. Coral samples with cytb gene sequence similarity ≥98% and with similar morphology were identified as the same coral species. The representative sequences of cytb genes obtained in this study have been submitted to the NCBI database with accession numbers MH160422–MH160426 (Supplementary Data Sheet 1). At each reef region, coral colonies from different reef sites (at least three reef sites) separated by at least 100 m were collected. Fragments of approximately 1 cm2 were picked and washed with filtered seawater (0.22-μm polycarbonate membranes) at least three times. 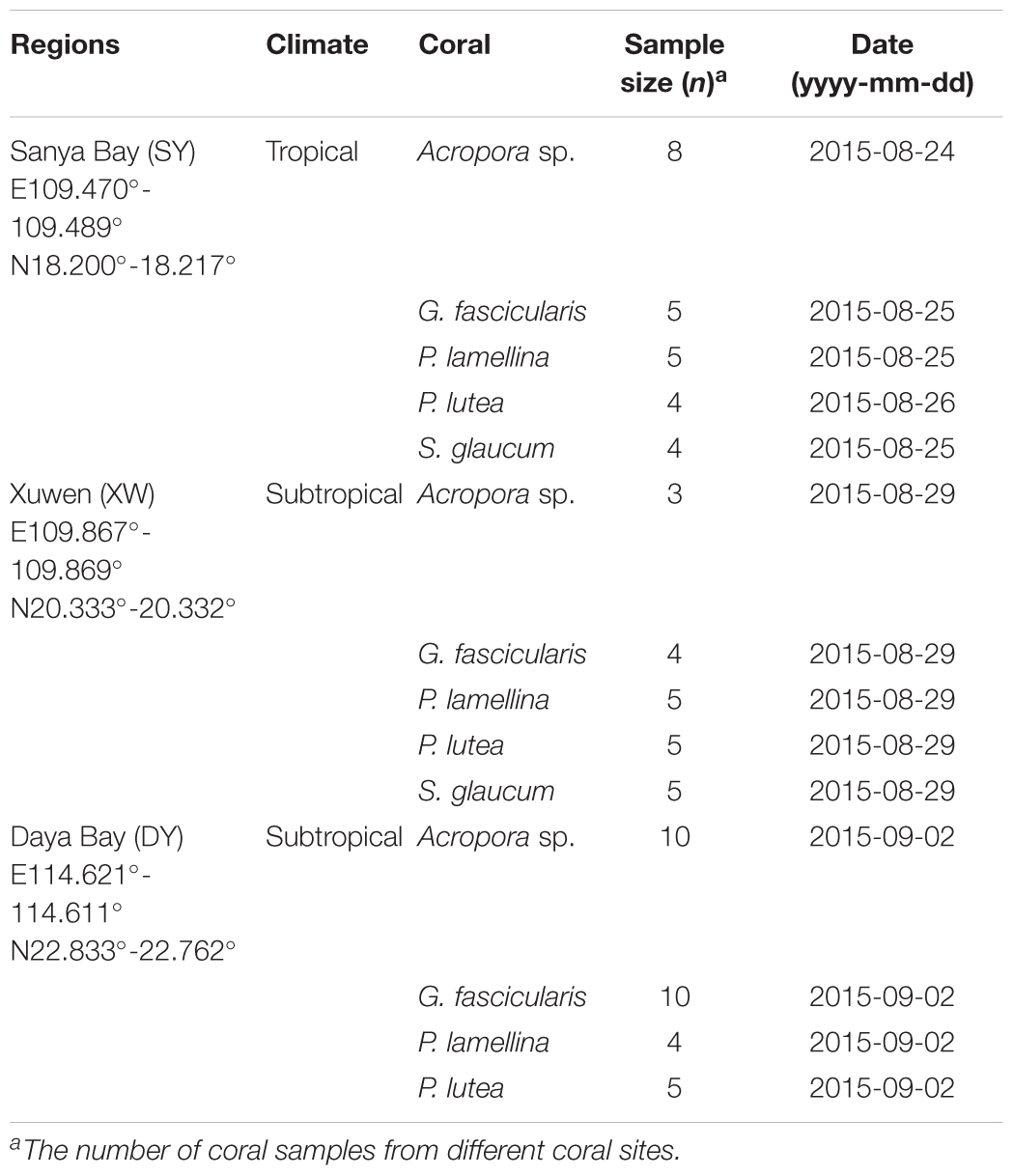 The seawater samples from at least five reef sites in each reef region were collected and filtered using 0.22-μm polycarbonate membranes (Whatman GF/F, 47 mm). Next, the filtered seawater from each of the different reef sites, that is, SY, XW, and DY reef regions, were mixed. All samples were preserved in RNAlater® at 4°C in the field and stored at -80°C in the lab until DNA extraction was conducted.

The mean annual SSTs of the SY, XW, and DY reef regions were calculated based on the SST of these reef regions in spring, summer, autumn, and winter of 2015 (Supplementary Table 1).

Total DNA of each coral sample was extracted using the Qiagen DNeasy Plant Mini Kit (Qiagen, Hilden, Germany) according to the manufacturer’s protocol. The integrity of the DNA was monitored by 0.8% (w/v) agarose gel electrophoresis stained with 1 × SYBR Safe (Invitrogen, Carlsbad, United States). The amount of DNA was determined by a Qubit® 3.0 Fluorometer (Life Technologies, United States). The purity of the DNA was determined by NanoDropTM 2000 Spectrophotometer (Thermo Scientific, United States). All DNA samples were stored at -20°C for further use.

The ITS2 region of the ribosomal RNA gene of Symbiodinium was PCR amplified using a pair of barcoded primers: ITSintfor2 (5′-GAATTGCAGAACTCCGTG-3′) and ITS2-reverse (5′-GGGATCCATATGCTTAAGTTCAGCGGGT-3′) (LaJeunesse and Trench, 2000). The PCR was performed with 12.5 μl of a Qiagen Multiplex PCR reagent (Qiagen, Hilden, Germany), 0.1 μM primer, 50 ng of DNA, and DNase-free water to make a total volume of 25 μl. The following PCR conditions were used: initial denaturation for 3 min at 94°C, followed by 34 cycles of 98°C for 10 s, 51°C for 30 s, 68°C for 30 s, and a final extension step of 5 min at 68°C. The DNA libraries were validated using an Agilent 2100 Bioanalyzer (Agilent Technologies, Palo Alto, CA, United States) and were quantified using a Qubit® 3.0 Fluorometer (Life Technologies, United States). All qualified amplification products were mixed in equal amounts followed by sequencing on an Illumina MiSeq instrument (Illumina, San Diego, CA, United States) according to the manufacturer’s instructions using a 300 × 2 paired-end configuration. The raw data were submitted to the NCBI Sequence Read Archive (SUB2393447).

According to the methods and script supplied by Cunning et al. (2017), paired reads from each sample were merged using the illumina-utils software (Eren et al., 2013) with an enforced Q30-check. Only sequences with overlap ≥150 bp and mismatch ≤3 bp were retained. Chimeric sequences were removed using USEARCH 6.1 (Edgar, 2010) implemented in QIIME (Caporaso et al., 2010). Primers were trimmed using cutadapt (Martin, 2011), allowing three mismatches. Only sequences with both forward and reverse primer matches and length ≥250 and ≤380 bp after trimming were retained. Qualified ITS2 sequences were clustered into operational taxonomic units (OTUs) at 97% identity within samples (e.g., sequences from each sample clustered independently). The OTUs that represented ≤3 ITS2 sequences were removed. The most abundant sequence from each OTU was chosen as the representative sequence and classified as a Symbiodinium subclade against a custom reference database of Symbiodinium subclades (Tong et al., 2017) using the Needleman-Wunsch global alignment algorithm implemented in the Biostrings package (Pagès et al., 2016) in R (R Core Team, 2014). Each OTU was then assigned a Symbiodinium subclade name with the highest alignment score.

To identify the phylogenetic relationships of Symbiodinium subclades with coral hosts, phylogenetic trees were constructed using two different methods: the Bayesian inference (BI) and maximum likelihood (ML) methods. Analyses were performed with the Kimura 2-parameter model, and the evolutionary models that fit best for the datasets were calculated using the program JModelTest version 2.1.7 (Darriba et al., 2012). For BI, the chain was run for 10 million generations, saving every 1,000th generation in Mrbayes (Ronquist et al., 2012). For ML, we performed 1,000 replicates of the rapid bootstrapping algorithm in MEGA version 6.06 (Tamura et al., 2013). Nearly identical trees were obtained; thus, only the ML tree was presented in this study. 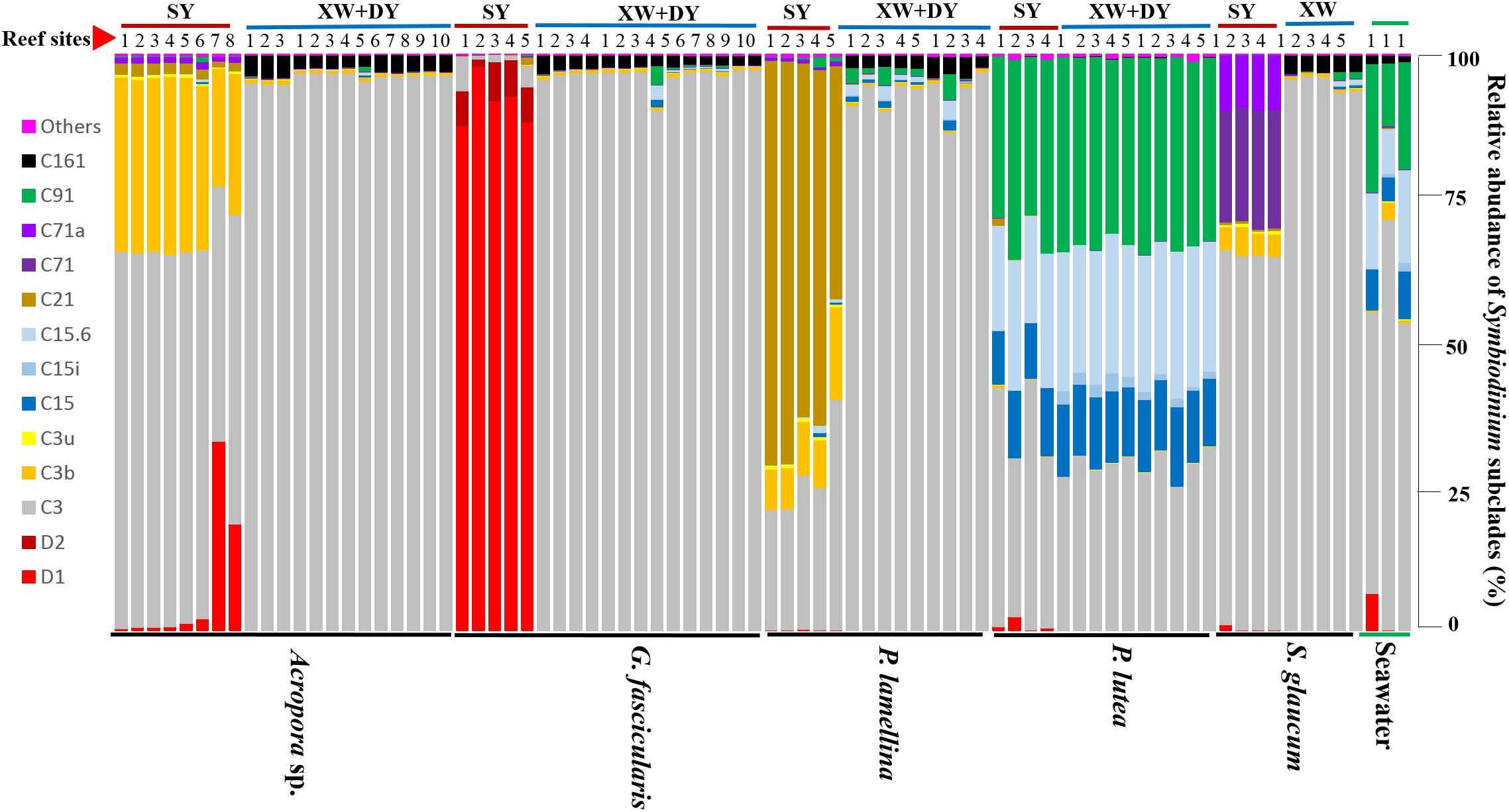 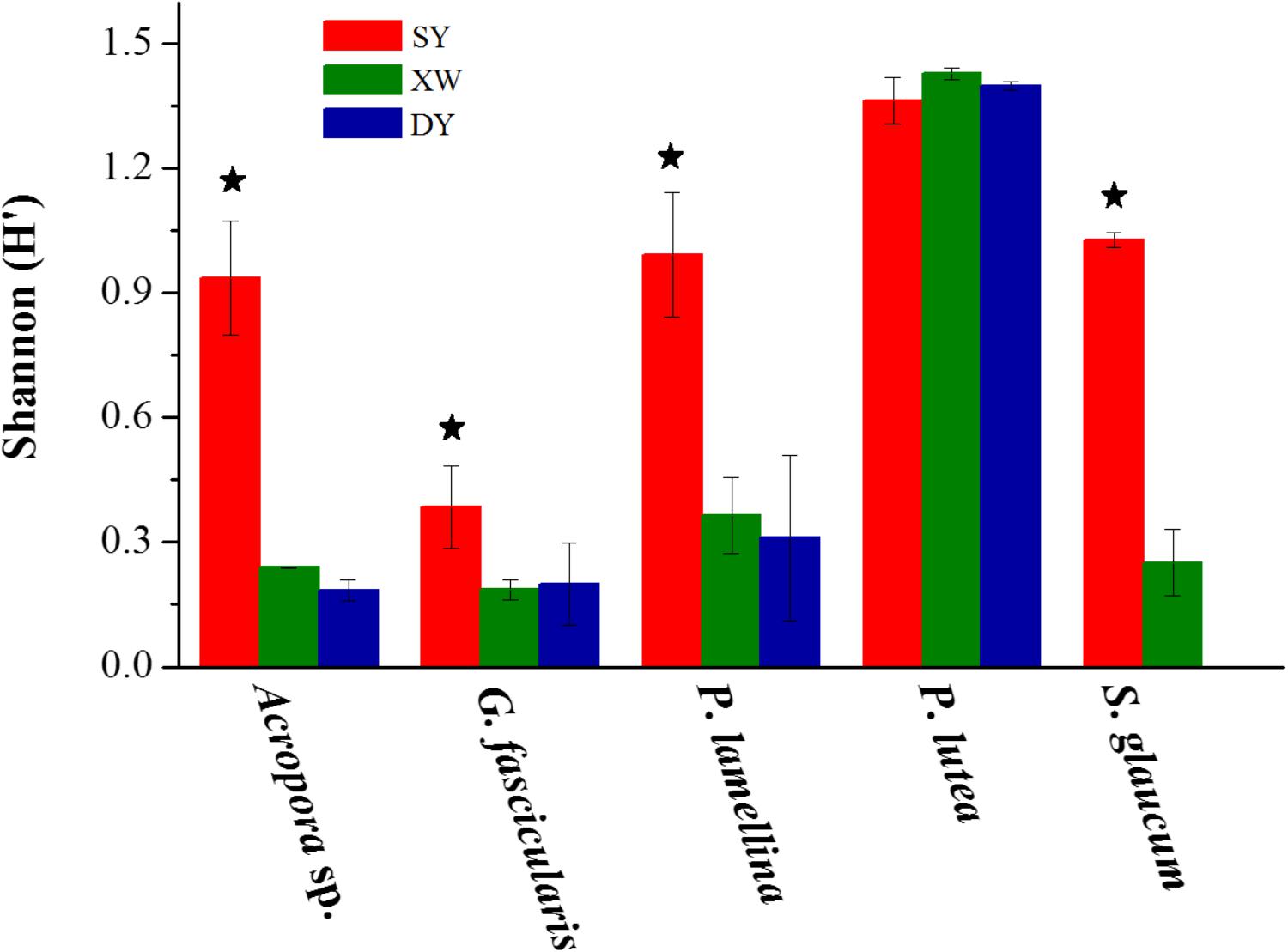 Relationship of Symbiodinium Subclade Compositions With Environmental Factors and Hosts 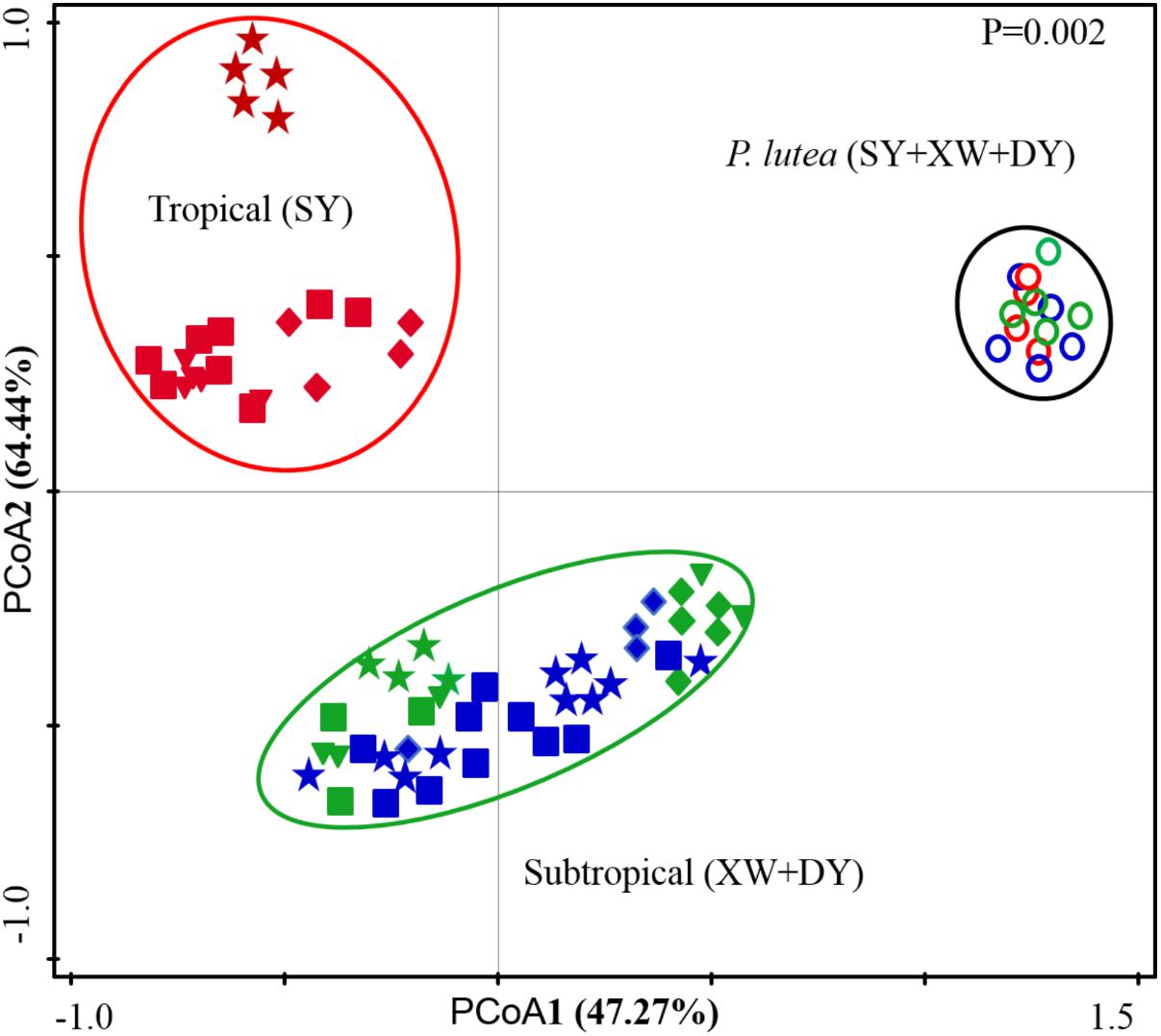 FIGURE 4. Principle coordinates analysis (PCoA) scores plot based on read counts of Symbiodinium subclades in coral samples from the tropical SY and subtropical XW and DY reefs in the northern SCS. The square (■) represents Acropora sp.; the star (

) represents P. lutea; and the triangle ( 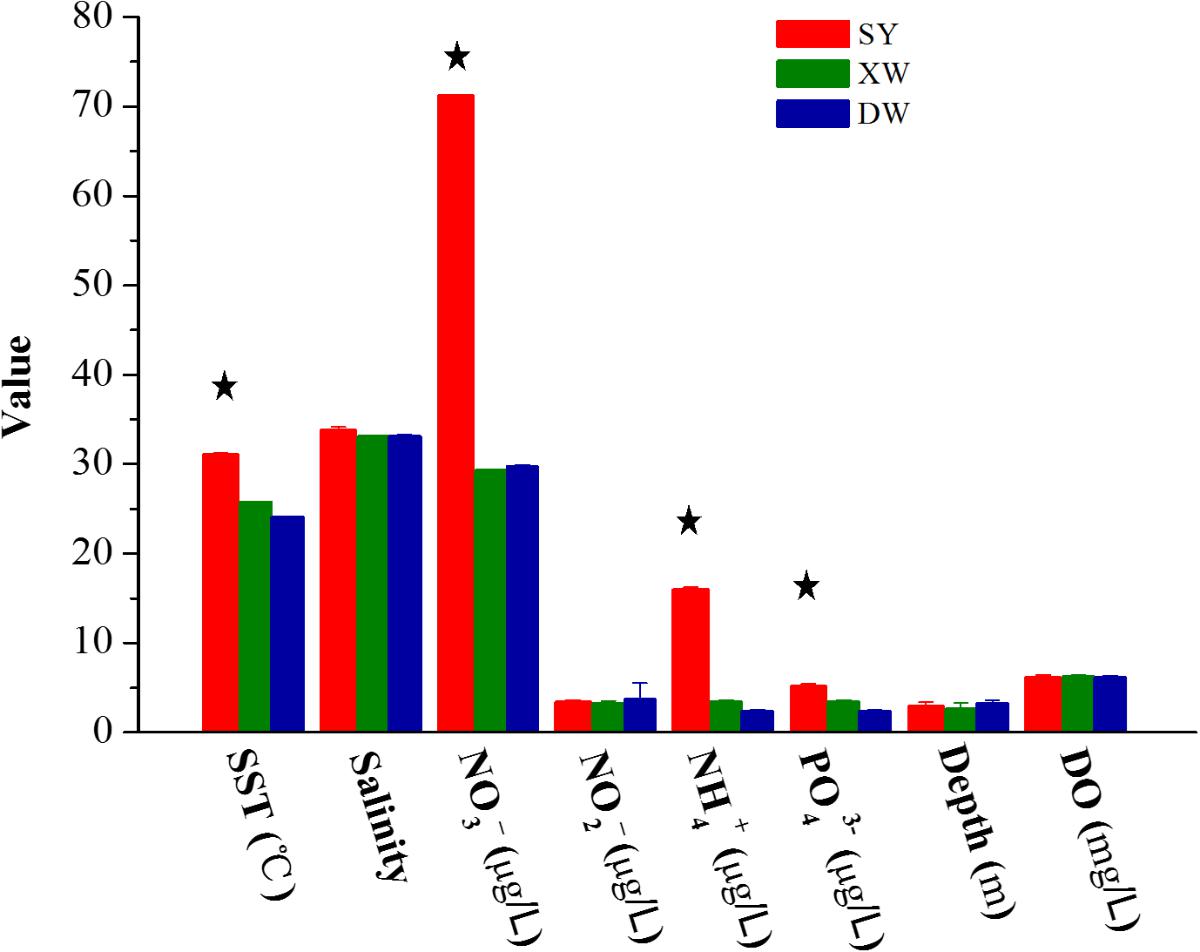 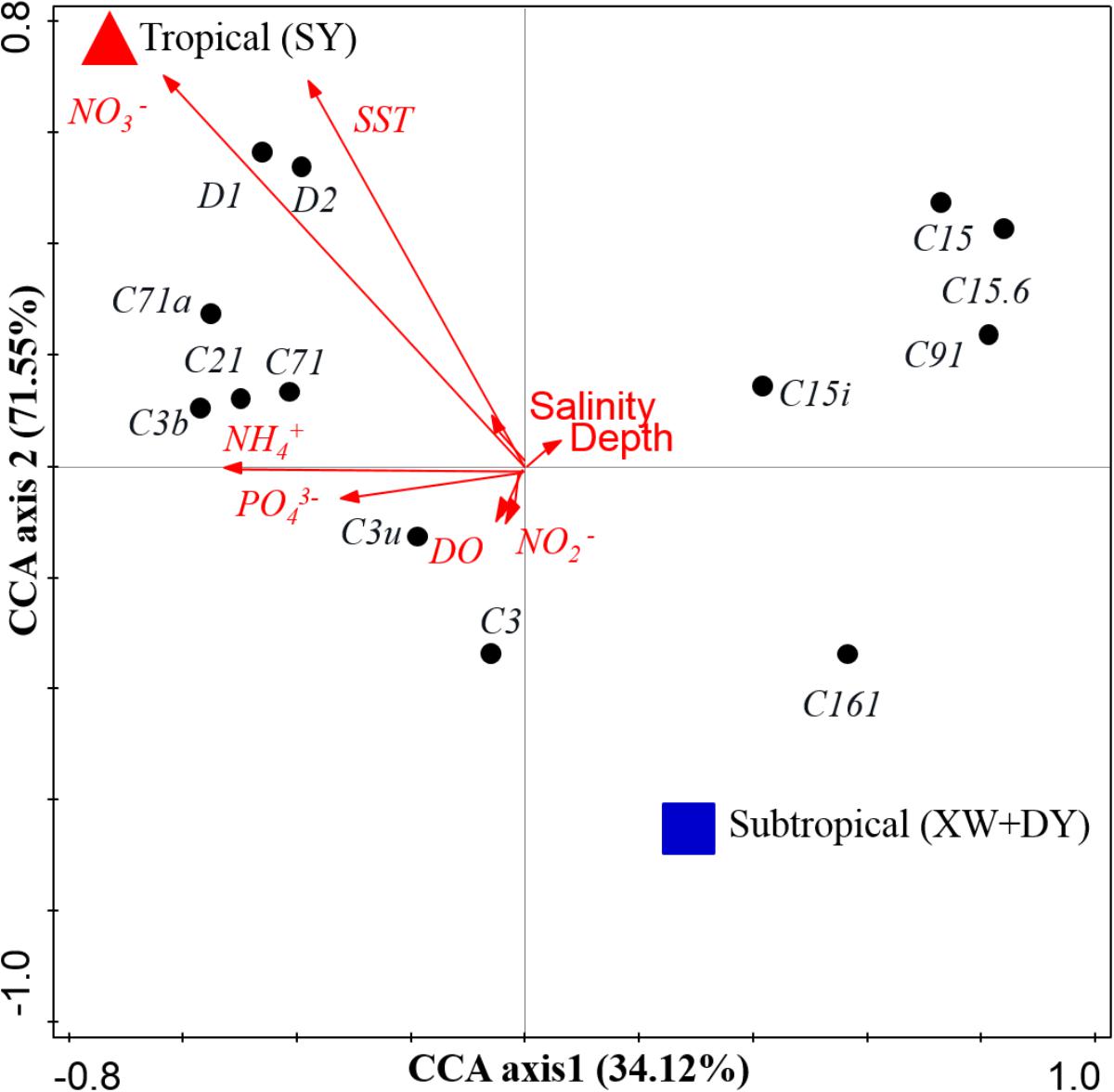 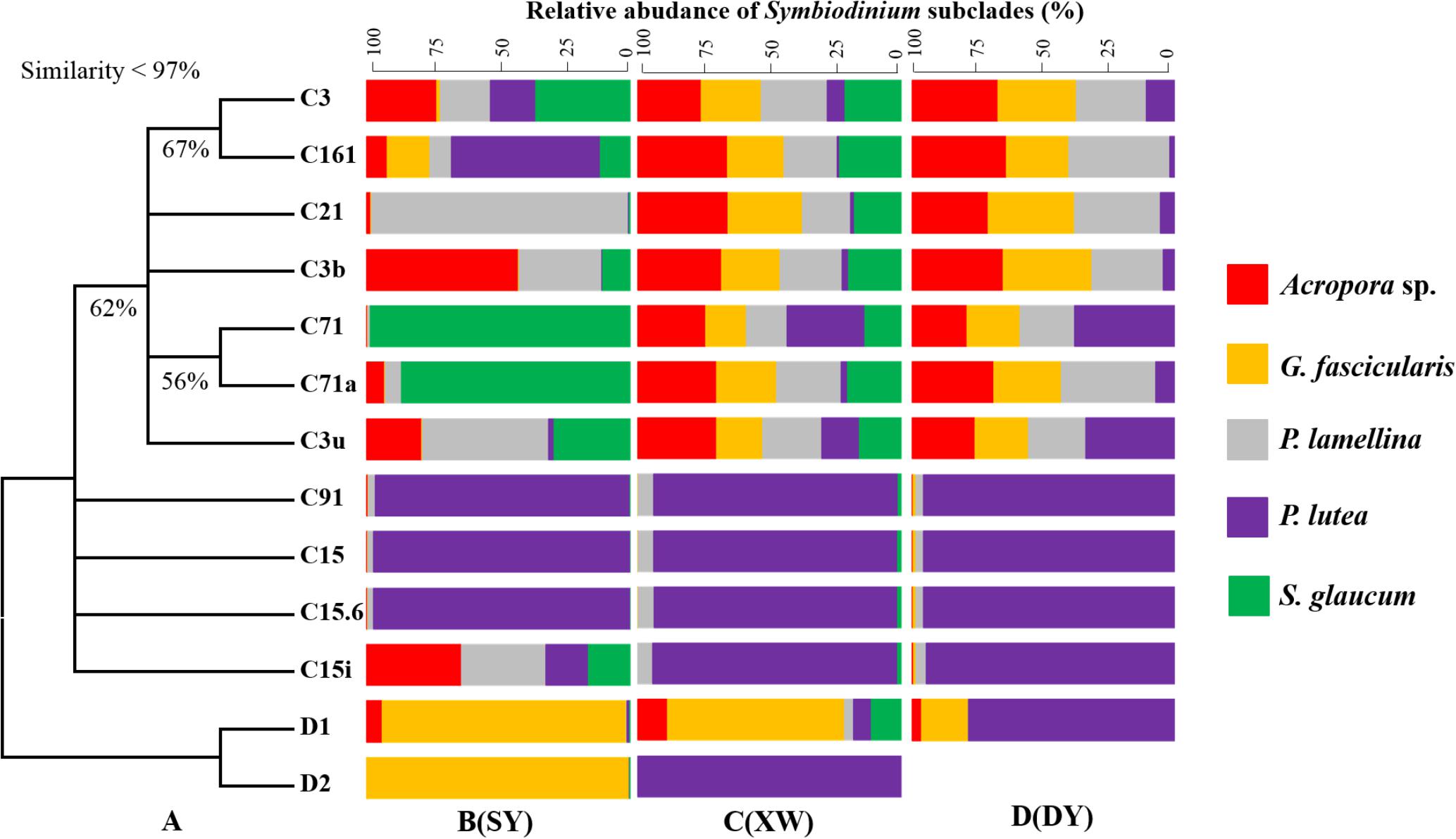 In this study, we investigated Symbiodinium subclade compositions in five typical coral species across the SY, XW, and DY reef regions in the northern SCS. Several studies have investigated Symbiodinium subclade compositions of certain corals in the SCS and suggested that temperature (SST) could shape coral-Symbiodinium symbiotic associations (Zhou and Huang, 2011; Tong et al., 2017; Zhou et al., 2017). According to this study, in addition to SST, other environmental factors, especially NO3-, NH4+, and PO43-, and host taxa affect coral-Symbiodinium symbiotic associations in the SCS as well.

The adaptation of corals to future climate change and anthropogenic disturbances strongly relies on their hosted Symbiodinium. In the SCS, temperature is one of the measured environmental factors that could shape coral-Symbiodinium symbiotic associations. Therefore, the rise of SST is a potential threat to corals in the SCS. Previous studies have shown that heat-tolerant corals contain a greater number of clade D Symbiodinium. Similar to Tong et al. (2017), the present results also show that G. fascicularis in the SCS appears to host more heat-tolerant Symbiodinium subclades within clade D, which may lead to their dominance during future climate change. In addition, the present study shows that other environmental factors (especially NO3-, NH4+, and PO43-) can also serve as major factors affecting coral-Symbiodinium symbiotic associations. Increases in coastal nutrients are frequently linked to human activities (Doney, 2010), which suggests that human activities may also affect coral-Symbiodinium symbiotic associations. The present results suggest that seawater pollution may be another potential threat to the explored corals in the SCS. A “nugget of hope” for these threats is that most explored corals in this study have the potential to adapt to future climate change with the flexibility of their symbiosis with Symbiodinium. One exception is the coral P. lutea. The present results show that Symbiodinium compositions in P. lutea are probably affected by host itself, and the Symbiodinium subclades C15, C15.6, and C91 seem to be specific to P. lutea. According to Warner et al. (2006), this type of specificity favors the evolution of mutualism in symbiosis, thereby, increasing the persistence of intimate and long-term mutualisms. In fact, in recent years, certain dominant coral species have been declining, while certain subdominant coral species are becoming more dominant (Grottoli et al., 2014). For example, the coral community structure in SY (Luhuitou, China) changed dramatically into the current predominance of massive Porites (primarily P. lutea) (Zhao et al., 2016). Based on the above results, the specificity between Symbiodinium and P. lutea may be a reason for P. lutea being the dominant coral in the SCS.

The raw sequence information in this paper has been deposited in the GenBank Sequence Read Archive with accession number SUB2393447.

This work was supported by the National Key Basic Research Programme of China (2013CB956103).

The reviewer CA-G and handling Editor declared their shared affiliation at time of review.

The Supplementary Material for this article can be found online at: https://www.frontiersin.org/articles/10.3389/fmicb.2018.02485/full#supplementary-material

Copyright © 2018 Gong, Chai, Xiao, Xu, Yu, Li, Liu, Cheng, Zhang, Liao and Li. This is an open-access article distributed under the terms of the Creative Commons Attribution License (CC BY). The use, distribution or reproduction in other forums is permitted, provided the original author(s) and the copyright owner(s) are credited and that the original publication in this journal is cited, in accordance with accepted academic practice. No use, distribution or reproduction is permitted which does not comply with these terms.