Integrons are DNA elements capable of capturing and mobilizing exogenously functional gene cassettes, potentially permitting rapid adaptation to selective pressure and endowing increased fitness to the host (Deng et al., 2015). The class 1 integron is the most prevalent type associated with MDR Salmonella, playing a critical role in the dissemination of antibiotic resistance among various bacterial species (Li R. et al., 2013; Abraham et al., 2014). In addition, other MGEs could serve as vast reservoirs and massive genetic pool for integrons, facilitating their further extensive distribution (Sunde et al., 2015). ISs are the simplest autonomous mobile elements capable of transposing and altering the expression of neighboring genes (Siguier et al., 2014). IS26 in multiple copies frequently reside in MDR plasmids flanking antibiotic resistance genes, performing actively in the fusion and reorganization of different plasmid replicons as well as the creation and diffusion of various MDR regions via a replicative mechanism or a translocatable unit (TU) (Harmer et al., 2014; He et al., 2015; García et al., 2016). It's noteworthy that IS26 has been discovered to insert into and rearrange class 1 integrons, generating novel multi-resistance loci embedded in conjugative plasmids (Miriagou et al., 2005; Povilonis et al., 2010; Lai et al., 2013). The transposition activity of IS26 collaborates with capture and integration of class 1 integrons, resembling resistance gene clusters onto a single plasmid and resulting in the occurrence and spread of MDR. Unfortunately, there is very little research directly targeting on the correlation between IS26 and the class 1 integron in Salmonella, providing little highlights to trace IS26-class 1 integron-mediated MDR transmission and the evolution of MDR Salmonella under antibiotic selective pressure.

A total of 74 plasmid-harboring Salmonella isolates were used in this study, of which 37 were food isolates and 37 were clinical isolates. Among these Salmonella isolates, clinical isolates were collected by Shanghai Municipal Center for Disease Control and Prevention and Wuhan Municipal Center for Disease Control and Prevention, while food isolates were collected from beef, poultry, pork, shrimp, vegetables, fresh juice, and shellfish. Identification of plasmids by PCR-based replicon typing (PBRT) has been investigated by Chen et al. (2016). The detailed information of these isolates is listed in Table S1.

Genetic Context Analysis of Class 1 Integrons Associated With IS26

Genetic context associated with IS26 and class 1 integrons toward their frequently reported position relationship, was carried out by a touch-down PCR protocol (annealing temperature decreasing from 65 to 55°C in 20 cycles, and then 15 cycles at 50°C) among Salmonella isolates both positive for IS26 and class 1 integrons. Primers used were also listed in Table S2. Primers HS1081/qacEΔ1R targeted the IS26-class 1 integron relationship with the IS inserted into the upstream of class 1 integron, while primers 5′CS/IS26-F and 5′CS/IS26-3-F targeted the position relationship with the IS26 inserted into the downstream of class 1 integrons (Figure 1). PCR products were purified using the AxyPrep DNA Gel Extraction Kit (Axygen, USA) and sequenced by Shanghai Majorbio Bio-pharm Technology Co., Ltd. Comparative analysis of nucleotide sequences was performed using the BLAST program at the NCBI site (http://blast.ncbi.nlm.nih.gov/Blast).

Figure 1. Schematic representation of genetic association between IS26 and class 1 integrons toward their frequently reported position relationship with IS26 inserted into (A) the upstream or (B) the downstream of class 1 integrons. The dashed frames indicate the genes of the class 1 integron that may be truncated by IS26. The locations of the primers used for the PCR assay are represented with dark arrows.

IncHI2 was dominant incompatibility group in this study (Table S1). To better characterize IncHI2 plasmids, plasmid double locus sequence typing (pDLST) was performed as previously described (García-Fernández and Carattoli, 2010). To investigate the association between IncHI2 plasmids and complex IS26-class 1 integron arrangements, the corresponding isolates harboring both elements underwent the liquid mating assay (Dang et al., 2016) using rifampin-resistant E. coli NK5449 as the recipient strain. Transconjugants were selected on LB agar plates supplemented with rifampin (200 μg/ml) and another appropriate antibiotic [kanamycin (50 μg/ml), streptomycin (50 μg/ml), tetracycline (50 μg/ml), or ciprofloxacin (16 μg/ml)]. Conjugation frequencies were also calculated as the number of transconjugants per recipient for several representative isolates. The putative transconjugants were examined for the antibiotic susceptibility profile using the same set of antibiotics, and for the presence of complex IS26-class 1 integron arrangements as well as plasmid replicon type by PCR method as described above.

The transconjugants harboring both IncHI2 plasmids and typical complex IS26-class 1 integron arrangement patterns were selected to determine the plasmid size and location of those typical complex arrangements. All types of IS26-class 1 integron arrangements and IncHI2 replicon were PCR amplified (Table 1) and then purified using Axyprep DNA gel extraction kit (Axygen, Corning, China). All PCR amplifications were performed with the following amplification scheme: 1 cycle of denaturation at 94°C for 5 min, followed by 35 cycles of denaturation at 94°C for 1 min, annealing at different annealing temperature for 30 s and elongation at 72°C for 1 min. The amplification was concluded with an extension program of 1 cycle at 72°C for 10 min. The purified PCR products were labeled by DIG High Prime DNA Labeling and Detection Starter Kit I (Roche Applied Sciences, Germany) to be later used as Southern blot probes. The total DNA of transconjugants was first prepared in agarose plugs, digested with S1 nuclease (TaKaRa, China) and further separated by PFGE using CHEF-Mapper XA PFGE system (Bio-Rad, USA) to distinguish the plasmids of transconjugants (Dierikx et al., 2010). S. Braenderup H9812 universal size standard was used as PFGE marker (Hunter et al., 2005). The separated DNA fragments were transferred to a nylon membrane (Amersham, GE, USA), and then hybridized with the IncHI2 probe and corresponding digoxigenin-labeled IS26-class 1 integron arrangement probes, and finally detected using a NBT/BCIP color detection kit according to the manufacturer's instructions (Roche Applied Sciences, Germany).

IS26 Prevalence and Antimicrobial Susceptibility

Both intI1 and qacEΔ1-sulI genes of the class 1 integron were detected in all of the 37 IS26-positive antibiotic-resistant Salmonella isolates, of which 16 (43.2%) isolates harbored variable regions clustered in four different cassette arrays (Figure 3, I~IV). Apart from qacEΔ1 and sulI genes responsible for resistance to quaternary ammonium compounds and sulfonamides, respectively, the four antibiotic resistance gene cassettes confer resistance to aminoglycosides with aadA2 or aadA5, and confer resistance to trimethoprim with dfrA12 or dfrA17. Two such cassette arrays were embedded in simple integrons consisting of dfrA12-orfF-aadA2 (1.9 kb, n = 4, Figure 3I) and dfrA17-aadA5 (1.6 kb, n = 4, Figure 3III), while the other two were embedded in complex integrons carrying the IS26 element consisting of dfrA17-aadA5-IS26 (2.5 kb, n = 1, Figure 3IV) and dfrA12-orfF-ΔaadA2-IS26-ΔTn3-orf (4 kb, n = 7, Figure 3II). Array I and III in Figure 3 were popularly distributed in Salmonella (Li R. et al., 2013; Pérez-Moreno et al., 2013; Meng et al., 2017). Compared to Array I, aadA2 gene in Array II was truncated at the 578-bp from the 5′ CS by IS26, along with the insertion of a ΔTn3-orf fragment and partial deletion of the qacEΔ1 gene. Compared to Array III, reversely oriented IS26 inserted into the downstream of the aadA5 gene in Array IV without any disruption.

Figure 3. Genetic organization of different class 1 integrons. The orientation of each gene and insertion element is indicated by arrows. 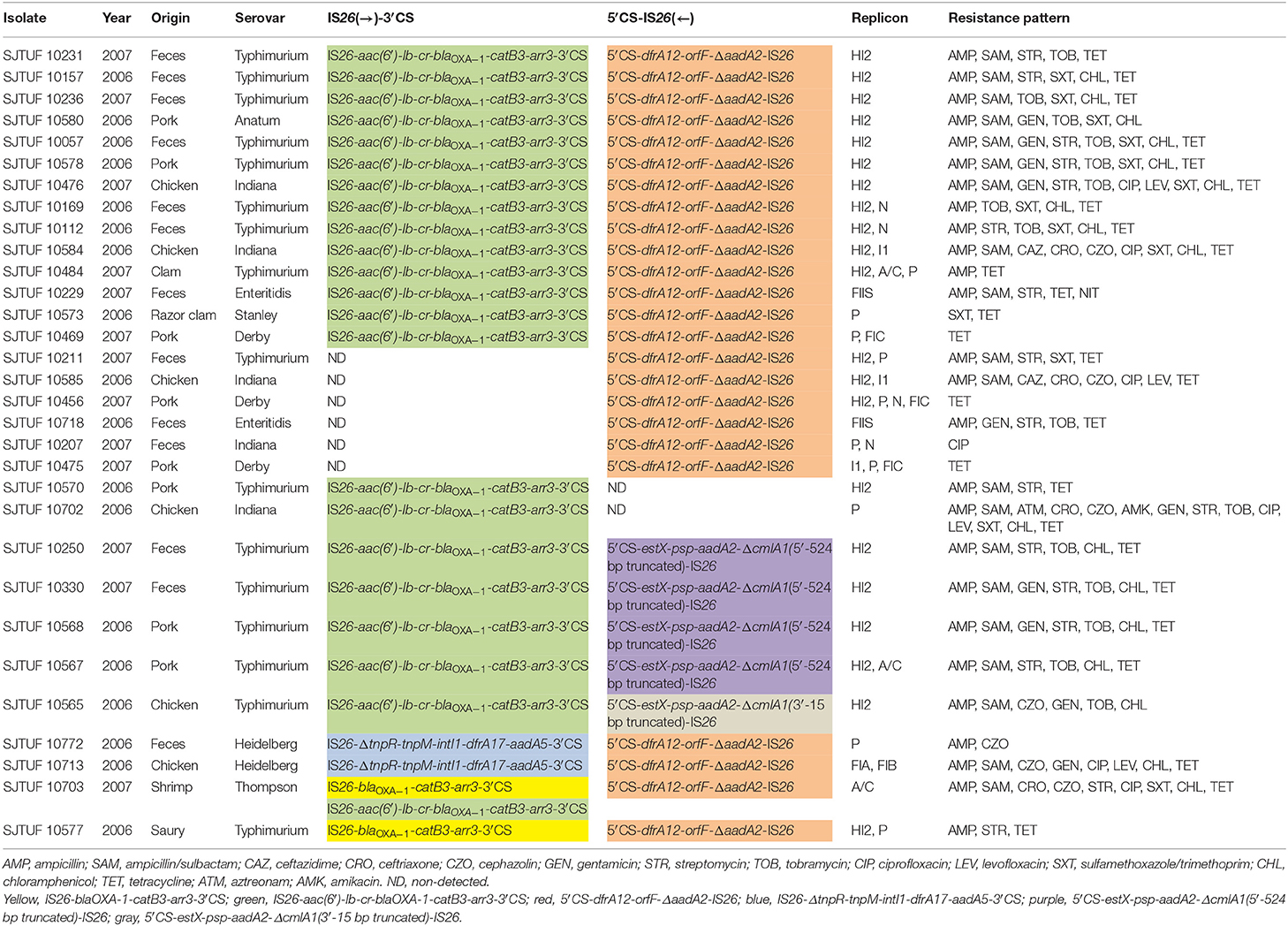 Target site duplication (TSD) is the characteristic hallmark of transposition (He et al., 2015). However, 8-bp typical TSD (TTCTACGG) (Oliveira et al., 2013) of IS26 transposition didn't occur among complex IS26-class 1 integron arrangements characterized in this study, which was also observed in some researches (Miriagou et al., 2005; Curiao et al., 2011; Hudson et al., 2014). Since IS26 transposes via a cointegrating mechanism, homologous recombination following IS26 transposition may cause DNA deletions or rearrangements, merely resulting in the generation of itself without flanking TSDs (He et al., 2015). In addition, IS26 in the Translocatable Unit (TU) targets an existing copy of IS26 and the TU will be incorporated immediately adjacent to it without increasing the number of IS26 copies or creating a duplication of the target (Harmer et al., 2014). Thus, further complete sequencing and analysis of representative plasmids harboring specific complex IS26-class 1 integron arrangements may be required to better understand the molecular mechanism of IS26-class 1 integron-mediated MDR.

IncHI2 plasmids are responsible for carrying numerous classes of resistance genes and frequently detected among MDR Salmonella (Lai et al., 2013; Li L. et al., 2013; Li et al., 2014). IncHI2 was the dominant incompatibility group in this study and six complex IS26-class 1 integron arrangement patterns were distributed in 21 IncHI2-positive Salmonella isolates (Table 2). Thus, pDLST was performed to better characterize these IncHI2 plasmids. All IncHI2 plasmids were assigned to ST3 except one untypable IncHI2 plasmid in SJTUF 10456 due to a failure to detect the smr0199 locus (data not shown), suggesting the occurrence of a new variant after multiple recombination events (Campos et al., 2016).

Figure 5. Schematic representation of IncHI2-associated complex IS26-class 1 integron arrangement patterns. The dotted lines imply omissions of the IncHI2 backbones. The orientation of each gene and insertion element is indicated by arrows.

S1-PFGE and subsequent Southern hybridization against DIG-labeled IncHI2 specific probes revealed that the size of IncHI2 plasmids in transconjugants with different IS26-class 1 integron arrangements ranged between 200 and 340 kb (Figure 6). It is noteworthy that there were no separated plasmids in SJTUF10577-TC which is inconsistent with previous PCR-based plasmid replicon typing results. This may be due to the nuclease degradation during S1 digestion or the plasmid integration into E. coli genome, which needs further study. There was only one plasmid in SJTUF 10584-TC and SJTUF10585-TC separated successfully by S1-PFGE, and the Southern blot confirmed only the plasmid in SJTUF 10584-TC belonged to IncHI2 group. The approximate 80-kb plasmid in SJTUF10585-TC possibly belonged to IncI1 group for that its size was in correspondence with the sequenced IncI1 plasmid (Tagg et al., 2014). Besides IncHI2 plasmid, there was one more untypable plasmid around 33 kb in SJTUF10570-TC. Therefore, except SJTUF 10577-TC and SJTUF 10585-TC, the four transconjugants SJTUF10565-TC, SJTUF10568-TC, SJTUF10570-TC, and SJTUF 10584-TC could be further involved in the Southern blot with different IS26-class 1 integron arrangement probes. As shown in Figure 6, the expected hybridization bands were displayed in all these four transconjugants with corresponding size of each IncHI2 plasmid. It could be concluded that the four IncHI2-associated complex IS26-class 1 integron arrangement patterns I-III, and VI (Figure 5) have been confirmed to locate on IncHI2 plasmids. Since SJTUF 10585-TC or SJTUF 10577-TC was the only transconjugant harboring IncHI2-associated complex IS26-class 1 integron arrangement pattern IV or V, it was hard to prove the localization of the pattern IV or V on IncHI2 plasmids in this study. Further whole genome sequencing including plasmids may be needed. 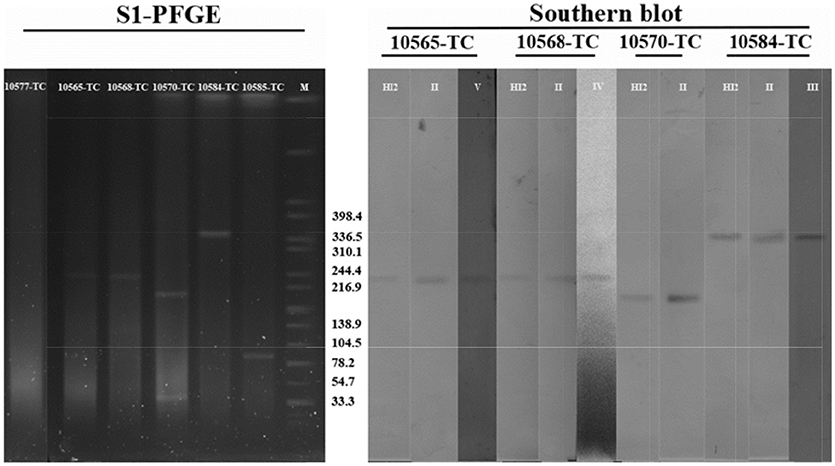 IncHI2 plasmids always show very conserved and stable scaffolds (García-Fernández and Carattoli, 2010), the formation of diverse complex IS26-class 1 integron arrangements may be mediated by IS26 via a replicative mechanism or a TU element (Harmer et al., 2014; Harmer and Hall, 2015; He et al., 2015). The transposition activity of IS26 collaborates with capture and integration of class 1 integrons, resembling resistance gene clusters onto a single plasmid. IS26-mediated further fusion and reorganization of such plasmids will facilitate the occurrence of novel IncHI2 derivative plasmids with various MDR regions (He et al., 2015; Fang et al., 2016; García et al., 2016). In addition, gene cassettes embedded in atypical class 1 integrons with 5′CS or 3′CS interrupted by IS26 couldn't be screened by conventional PCR. Thus, the comprehensive study of complex IS26-class 1 integron arrangements in Salmonella may provide a new perspective in tracing the spread and evolution of IS26-class 1 integron-mediated MDR as well as MDR IncHI2 plasmids.

The Supplementary Material for this article can be found online at: https://www.frontiersin.org/articles/10.3389/fmicb.2018.02492/full#supplementary-material

Copyright © 2018 Zhao, Chen, Xu, Zhou and Shi. This is an open-access article distributed under the terms of the Creative Commons Attribution License (CC BY). The use, distribution or reproduction in other forums is permitted, provided the original author(s) and the copyright owner(s) are credited and that the original publication in this journal is cited, in accordance with accepted academic practice. No use, distribution or reproduction is permitted which does not comply with these terms.