Department of Health Sciences, Faculty of Medicine and Surgery, University of Milan, Italy

Canine parvovirus (CPV-2) is an enteric virus causing morbidity and mortality in dogs worldwide. Since CPV-2 emerged as canine pathogen, the original CPV-2 strain has constantly evolved, and its primary variants (CPV-2a, CPV-2b, and CPV-2c) co-circulate to varying extents in canine populations worldwide. Thus, rapid and accurate laboratory diagnoses of CPV-2 variants are crucial to monitor CPV-2 evolution. Conventional methods for CPV-2 genotyping are laborious, time consuming, and determining the genotype of a CPV-2 variant often requires two or more reaction tubes. The present study developed a probe-based fluorescence melting curve analysis (FMCA) for genotyping six different CPV-2 variants (original CPV-2, CPV-2a, CPV-2b, CPV-2c, and vaccine strains of CPVpf and CPVint) in a single reaction tube using only two TaqMan probes. One of the TaqMan probes (FAM labeled) was designed to perfectly match with the target sequence of CPV-2a, this probe allows a 1-bp mismatched hybridization with the CPV-2b VP2 gene region (A4062G), and a 2-bp mismatched hybridization for CPV-2c (A4062G and T4064A); Another TaqMan probe (HEX labeled) was produced to perfectly match with the target sequence of original CPV-2, this probe enables 1-bp mismatched hybridization with the other CPV-2 variants (A3045T). Using the two TaqMan probes, all six CPV-2 variants were readily distinguished by their respective melting temperature values in a single reaction tube. The detection limits of this assay were 1–10 copies per reaction for six CPV-2 construction plasmids and no cross reactions were observed with several other common canine viruses. In this assay, co-infected samples were also directly identified via probe-based FMCA without using a mixing control; only a pure control is required. The clinical evaluation of this assay was demonstrated by analyzing 83 clinical fecal samples, among which 41 (49.39%), 8 (9.63%), and 14 (16.87%) samples were found to be positive for CPV-2a, CPV-2b, and CPV-2c, respectively. The concordance rate between probe-based FMCA and Sanger sequencing was 100%. Thus, the duplex FMCA is effective, rapid, simple, high-throughput, and straightforward for genotyping CPV-2 variants, and is useful to effectively diagnose and monitor CPV-2 epidemiology.

To control the disease, live modified vaccines have been widely used. Despite this, the CPV-2 infection remains a major problem for pets (Decaro and Buonavoglia, 2017). Furthermore, these live vaccines may replicate in the gastrointestinal tract and are shed along with the feces of vaccinated dogs (Gizzi et al., 2014), which has been suspected to interfere with diagnostic tests for clinical signs of acute gastroenteritis. As variants of CPV-2 emerged, the CPV-2 vaccine appeared to provide relatively lower and shorter immunity against heterologous CPVs (Decaro et al., 2008; Zhang et al., 2010). This observation can lead to a diagnostic dilemma when pups that have been administered with a CPV-2 vaccine recently present with clinical signs of acute gastroenteritis (Decaro et al., 2007). Based on these findings, CPV-2 variants need to be identified effectively for diagnosis and epidemiological monitoring.

Table 1. Primers and probes used in this study.

Three sets of primers and two dual-labeled probes, designed to target the VP2 gene of CPV-2, were used in this study (Table 1). The primer sets 87f-1/87r-jb, cpv-F2/ab-Rev, and probes P1 and P2, were designed to differentiate between the vaccine strains of CPVpf and CPVint, original CPV-2, CPV-2a, CPV-2b, and CPV-2c (Figure 1 and Table 1). P1 was designed to perfectly match with the target sequence of original CPV-2, while P2 was a perfect match with CPV-2a (Figure 1A). The primer set CPV-1270F/1270R was used to generate recombinant plasmids, which were used to determine the limit of detection (LOD) of the assay and co-infection analysis, and also used to sequence the VP2 gene. All primer and probe sequences were analyzed using BLAST to confirm their specificity. 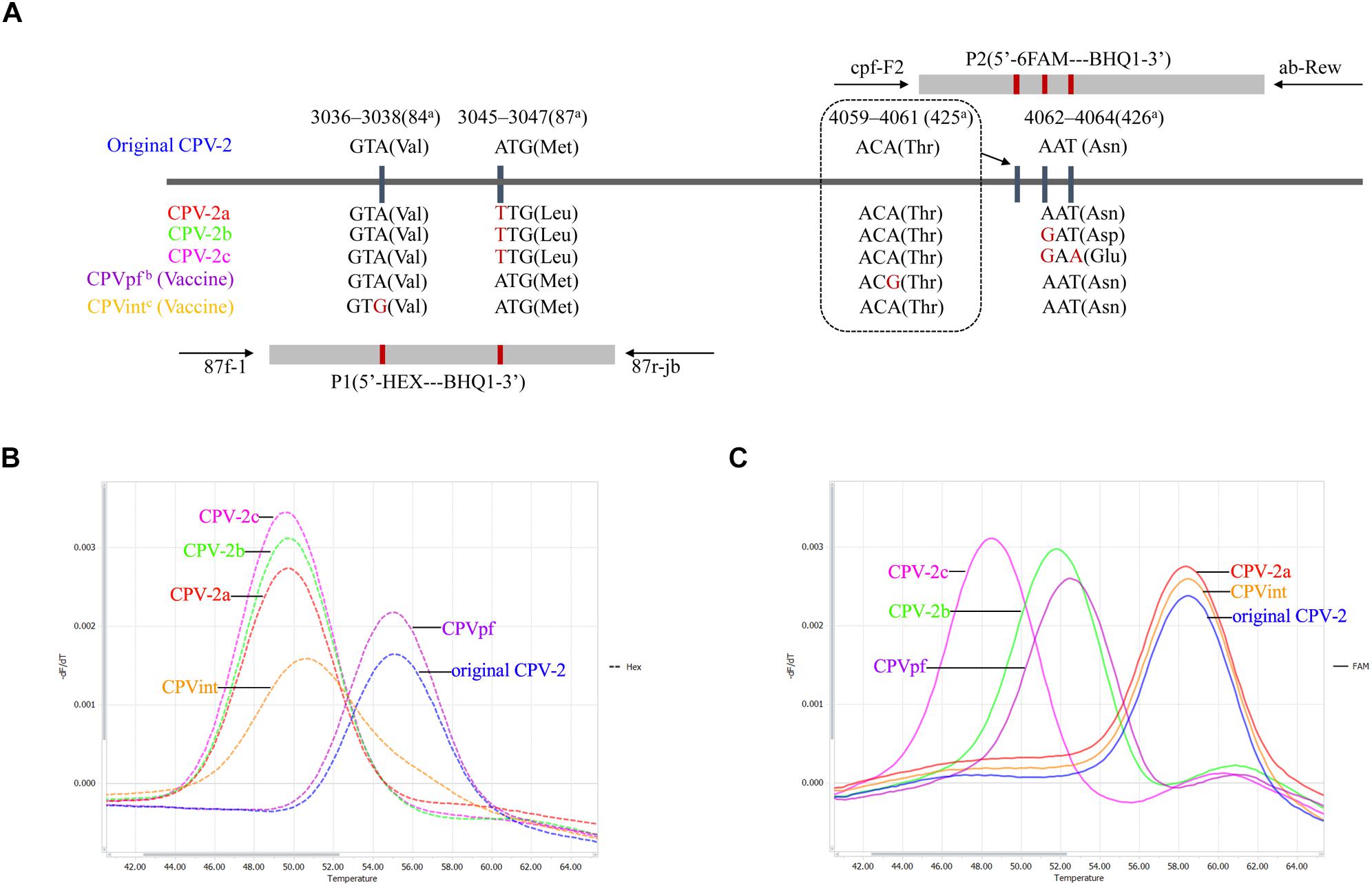 The duplex FMCA assay was performed on a LightCycler® 96 real-time system (Roche, Switzerland) in a 10-μL reaction containing 1× Taq Plus Master Mix (Vazyme, Nanjing, China), 0.02 μM of primer 87f-1, 0.03 μM of primer cpv-F2, 0.2 μM of primer 87r-jb, 0.3 μM of primer ab-Rev, 0.2 μM of probe P1, 0.3 μM of probe P2, and 1 μL of DNA template. Amplification started with denaturation for 5 min at 95°C, followed by amplification using 55 cycles of 95°C for 15 s, 55°C for 15 s, and 72°C for 15 s. Melting curve analysis was initiated with denaturation at 95°C for 180 s, followed by hybridization at 37°C for 180 s, and a stepwise temperature increment from 37 to 97°C at an ramp rate of 0.1°C/s, with a duration of 1 s. Fluorescence from both the FAM and HEX channels was measured at each step during the melting curve analysis. Melting curves were obtained by plotting the negative derivative of the fluorescence intensity with respect to temperature (-dF/dT) versus temperature (T). The Tm value for each probe was automatically obtained by identifying the peak of the corresponding melting curve. The melting Tm difference (ΔTm) between reference plasmid p-CPV-2 and detected samples was calculated in the HEX channel, while the reference plasmid was pCPV-2a in the FAM channel.

The specificity of duplex FMCA was validated using DNA or cDNA (complementary DNA) samples from six CPV-2 variants and five other viruses (Supplementary Figure S2). No specific melting peak was detected with the other non-targeted dog viruses such as CDV, CAV-2, CCV, CRV, and CPIV in either the FAM or HEX channels. These results suggested that the designed primer sets and probes were highly selective and specific for their target viruses, exhibiting no cross-reactivity with several other common canine viruses.

We next evaluated the run-to-run reproducibility of the duplex FMCA assay. Considering the narrow Tm windows, the assay was run on different days using known genotypes of 30 CPV-2 fecal samples and positive plasmids p-CPV-2, pCPVpf, and pCPVint. The result showed that the SD absolute values of Tm for all the tested samples determined from both probes ranged from 0 to 0.36°C (Table 2), which are lower than 1°C. This result demonstrated that the discriminatory power of the developed method could be ensured by the high reproducibility of the Tm values.

To assess the capacity of FMCA to detect co-infection, unequal mixtures of two differently constructed plasmids were mixed at ratios ranging from 1:1 to 1:9 (v/v). By varying two of six plasmids relative ratios, the results showed that as low as 10% (1:9) of one genotype in the presence of 90% (9:1) of the other genotype was distinguishable in the mixed sample at a template concentration of 108 copies per reaction. The relative height of the melting peaks was positively correlated with the ratio of the mixed genotypes (Supplementary Figures S3, S4). Considering that it is almost impossible for the two kinds of vaccines to be present in the same field sample, the assay was not evaluated when pCPVpf and pCPVint were simultaneously present in the same reaction. 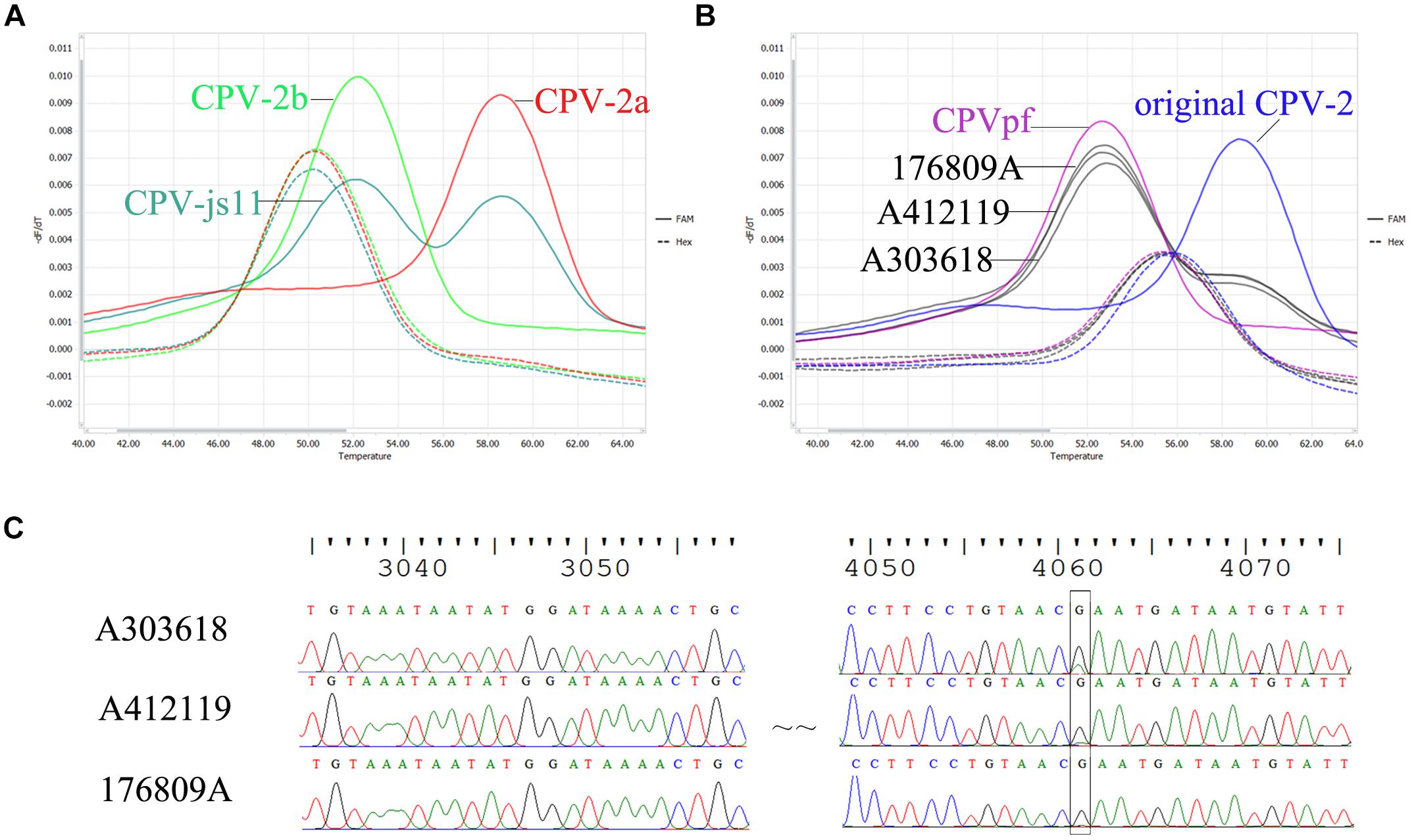 Melting curve analysis in conjunction with real-time PCR, including high-resolution melting curve analysis (HRM) (Montgomery et al., 2007; Er and Chang, 2012; Bruzzone and Steer, 2015) and TaqMan probe-based FMCA (El Housni et al., 2003), has been widely used in clinical laboratories to detect SNPs. Compared with TaqMan probe-based FMCA, HRM is a simple, rapid, and inexpensive method for SNP testing. In our laboratory, PCR coupled with HRM curve analysis has also been developed to genotype Canine parvovirus type 2 (CPV-2) variants (Bingga et al., 2014). However, HRM analysis encounters technical difficulties when different CPV-2 genotypes from one sample need to be detected simultaneously in a single reaction tube. This problem can be solved using probe-based FMCA. The advantage of probe-based FMCA is its ability for multiplex detection using probe with specific melting temperatures. When the template DNA fully matches with the probe sequence, the probe will bind at the specific melting temperature. If the template DNA has a mismatch with the probe, the melting temperature will decrease remarkably compared with the matched hybrids. Thus, the Tm difference (ΔTm) between the fully matched hybrid and the mismatched hybrids allows researchers to detect SNP variations in a single reaction tube.

In this study, two TaqMan probes were designed to identify six different CPV-2 variants using melting temperature difference in a single tube. A TaqMan probe is a typical dual labeled hydrolysis probe. A standard TaqMan probe consist of an 18–25 bp oligonucleotide probe that is labeled with a reporter fluorophore at its 5′ end and a quencher fluorophore at its 3′ end (Livak et al., 1995). In solution, the randomly coiled conformation enables fluorescence quenching because the quencher and the fluorophore remain in proximity to each other. Thus, a non-hybridized TaqMan probe is only weakly fluorescent. When the probe hybridizes with its target, strong fluorescence occurs because the quencher and fluorophore are separated by the length of the probe. After denaturation from the probe-target hybrid, the probe returns to its weakly fluorescent, randomly coiled conformation.

In our assay, the sequencing analysis was executed in parallel for all the field samples and the results showed that 100% accuracy was achieved from the probe-based FMCA method, while 98.23% accuracy was achieved for the HRM assay (Supplementary Table S3). The increased accuracy of FMCA derived from larger Tm differences than those in HRM between the different genotypes of CPV-2. For example, the melting temperature shifts between CPV-2b and CPV-2c were 3.2°C using probe-based FMCA, which was significantly higher than the Tm difference (0.2°C) between them in the HRM analysis in our previous study. In the HRM analysis, CPV-2b and CPV-2c were discriminated from each other by an additional hybridization step to generate heteroduplexes (Bingga et al., 2014). Moreover, distinguishing all the CPV genotypes, including two vaccine strains, had to be accomplished using four separate reaction tubes in the HRM assay (Bingga et al., 2014), while it was done in a single reaction tube with two labeled probes in FMCA.

It is notable that when the developed probe-based FMCA assay was used to detect the commercial attenuated live vaccine of Vanguard® Plus 5, two melting peaks were observed in the FAM channel. According to the Tm values, the vaccine contains CPVpf (52.27 ± 0.31°C) and original CPV-2 (58.32 ± 0.40°C) simultaneously, and the height of melting peak indicated that CPVpf is dominant. The sequencing results of the PCR products and cloning experiments both confirmed two different strains of CPVpf and original CPV-2 co-existed in the CPV-2 commercial vaccine Vanguard® Plus 5. Thus, this developed method can also be used as a tool for rapid identification of vaccine purity.

ZL and GB conceived the study and wrote the manuscript. CZ carried out the data analysis. JjS collected and detected the field samples using an antigen test kit. HS and JyS participated in manuscript preparation. ZL, GB, CZ, and JZ designed the experiments. All authors read and approved the final manuscript.

The Supplementary Material for this article can be found online at: https://www.frontiersin.org/articles/10.3389/fmicb.2019.00419/full#supplementary-material

Copyright © 2019 Liu, Bingga, Zhang, Shao, Shen, Sun and Zhang. This is an open-access article distributed under the terms of the Creative Commons Attribution License (CC BY). The use, distribution or reproduction in other forums is permitted, provided the original author(s) and the copyright owner(s) are credited and that the original publication in this journal is cited, in accordance with accepted academic practice. No use, distribution or reproduction is permitted which does not comply with these terms.