Campylobacter species are responsible for the greatest number of bacterial-mediated diarrhea outbreaks in the world (World Health Organization, 2013), with the thermophilic Campylobacter jejuni and Campylobacter coli being the most common pathogens. The European Food Safety Agency (EFSA) reports that C. jejuni has caused the most cases of bacterial foodborne diseases in the European Union for many years (European Food Safety Agency and European centre for Disease Prevention and Control, 2015). According to statistics on the number of foodborne pathogenic microorganisms in the United States by the United States Centers for Disease Control and Prevention (USA-CDC) in 2016, the number of cases caused by C. jejuni ranked highest (Centers for Disease Control and Prevention [CDC], 2017). In addition, Campylobacter infection can lead to extraintestinal complications and campylobacteriosis such as Guillain Barré syndrome, reactive arthritis, and irritable bowel syndrome (Nachamkin et al., 1998; Zia et al., 2003; Connor, 2005). An outbreak of C. jejuni resulted in 32 Guillain Barré syndrome patients in Shuangyang District, Changchun City, Jilin Province, China, during 2007 (Zhang et al., 2010b).

Campylobacter can colonize poultry, swine, and ruminants (Gallay et al., 2007; Elhadidy et al., 2018); therefore, people are easily infected when handling and consuming raw and semi-raw contaminated foods, as well as contaminated water (Klein-Jöbstl et al., 2016; Kovanen et al., 2016). Most Campylobacter infections are mild, self-limiting, and resolve within a few days. However, effective antimicrobial treatment is essential for people with severe or prolonged Campylobacter infections, and the elderly, young, or immunocompromised patients (Reddy and Zishiri, 2017). Clinical treatment of gastroenteritis caused by Campylobacter is usually performed with macrolides and fluoroquinolones; however, occasionally, severe systemic infection requires the use of aminoglycoside antimicrobials, such as gentamicin (Blaser and Engberg, 2008; Pernica et al., 2016). Campylobacter isolates from both developed and developing countries show resistance to several antimicrobials, including aminoglycosides, fluoroquinolones, macrolides, and tetracyclines (Padungton and Kaneene, 2003; Ruiz-Palacios, 2007; Ge et al., 2013; Abdi-Hachesoo et al., 2014; Shobo et al., 2016; Reddy and Zishiri, 2017), which led the World Health Organization in 2017 to list Campylobacter spp. as one of the six high-priority antimicrobial-resistant pathogens (World Health Organization, 2017). Therefore, identifying the molecular characteristics of resistant isolates and estimating their frequency in different populations is important for disease prevention aimed at controlling the emergence of resistant isolates and detecting resistant infections rapidly.

From 2017 to 2018, Campylobacter isolates were obtained from 2,945 patients with acute diarrhea in 14 hospitals in pilot areas (Xicheng, Fengtai, Shunyi, Fangshan, Yanqing, and Mentougou Districts) of a Campylobacter surveillance program in Beijing. Patients were defined as having ≥3 watery, loose, mucosal, or bloody stools over a 24-h period. Five milligrams of fresh stool sample was collected from each of the diarrheal patients. The samples were maintained in Cary-Blair medium (Oxoid CM0935), at 4°C and transported to the laboratory for bacterial isolation within 24 h. A Campylobacter isolation kit incorporating a membrane filter method (ZC-CAMPY-002, Qingdao Sinova Biotechnology Co., Ltd., Qingdao, China) was used to isolate Campylobacter. Briefly, 1 mL of fecal specimen suspension was transferred to 4 mL of enrichment medium provided in the kit. The main component of the enrichment medium was a modified Preston broth. The enrichment medium was then cultured at 42°C for 48 h in a microaerobic atmosphere (5% O2, 10% CO2, and 85% N2). Approximately 300 μL of enrichment medium was spotted on the membrane filter (Type: 0.45 μm) surface of the kit and spread onto Karmali and Columbia agar plates. Five (if less than 5, pick all) or more colonies resembling Campylobacter were picked after 48 h of incubation at 42°C in a microaerobic atmosphere. All isolates were firstly identified using matrix-assisted laser desorption/ionization time of flight (MALDI-TOF) mass spectrometry (Bruker, Leipzig, Germany) and further checked by PCR, according to a previously described method (Wang et al., 2002).

MLST was performed by sequencing seven housekeeping loci (aspA, glnA, gltA, glyA, pgm, tkt, and uncA) according to a previously described method (Dingle et al., 2001). Briefly, genomic DNA was extracted using a commercial kit (QIAamp DNA mini kit, Germany). Amplification reactions were performed in a 20 μL mixture containing 10 μL of 2 × PCR master (Sangon Biotec., Shanghai, China), 0.5 μL of forward and reverse primer, 1 μL of DNA template, and 7.5 μL of pure water. PCR was performed as 1 cycle of 5 min at 94°C; 35 cycles of 1 min at 94°C, 2 min at 50°C, and 1 min at 72°C; and a final extension of 5 min at 72°C. After amplification, 2 μL of the PCR product was subjected to electrophoresis through a 1.5% agarose gel. The PCR products were then purified and sequenced (3730xl DNA Analyzer, Applied Biosystems, United States). The alleles of each gene were determined from a comparison of seven alleles in the MLST database1. For each isolate, the number of alleles was assigned and sequence types (STs) and cloning complexes (CCs) were determined. New alleles and STs were submitted to the PubMLST database. A minimum spanning tree (MST) and dendrogram of MLST data was created using BioNumerics v.7.6 (bioMérieux, Marcy-l’Étoile, France).

SPSS software, version 20.0 (SPSS, Inc.) was used to analyze any significant statistical differences in the results. Differences in the frequencies of Campylobacter isolation rate across STs, CCs, and MDR isolates, and other variables, including epidemiological data, were examined using χ2 and Fisher’s exact tests for dichotomous variables; p < 0.05 was considered significant. 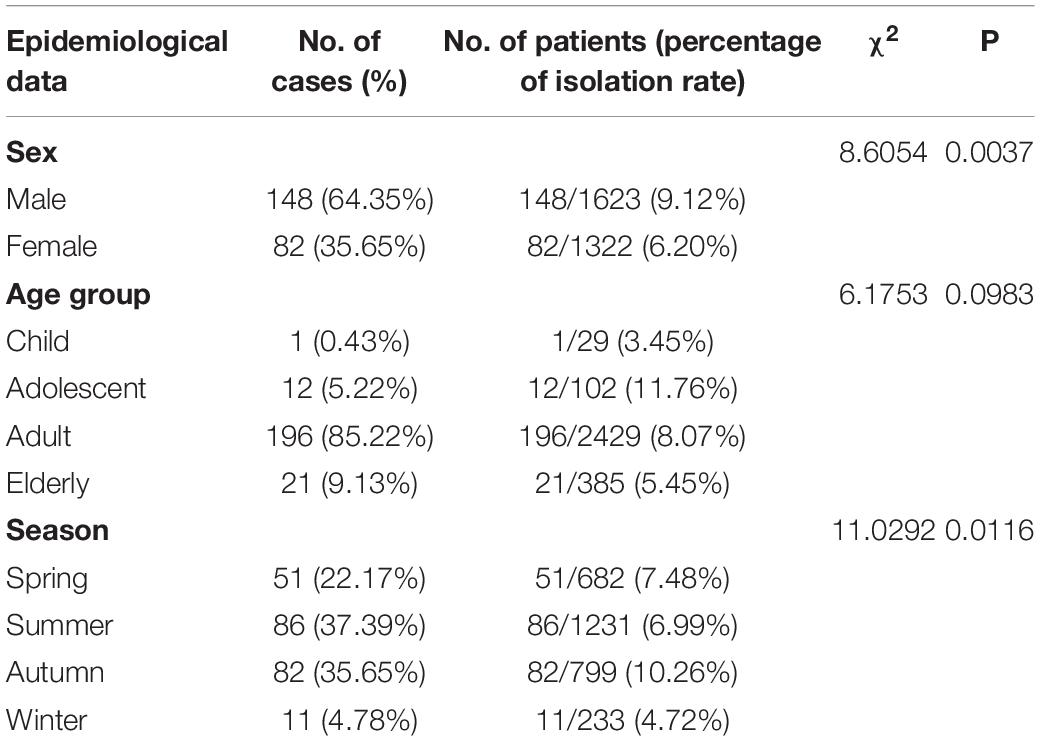 Table 1. Description of the patients (230, total number of studied 2,945) included in this study. 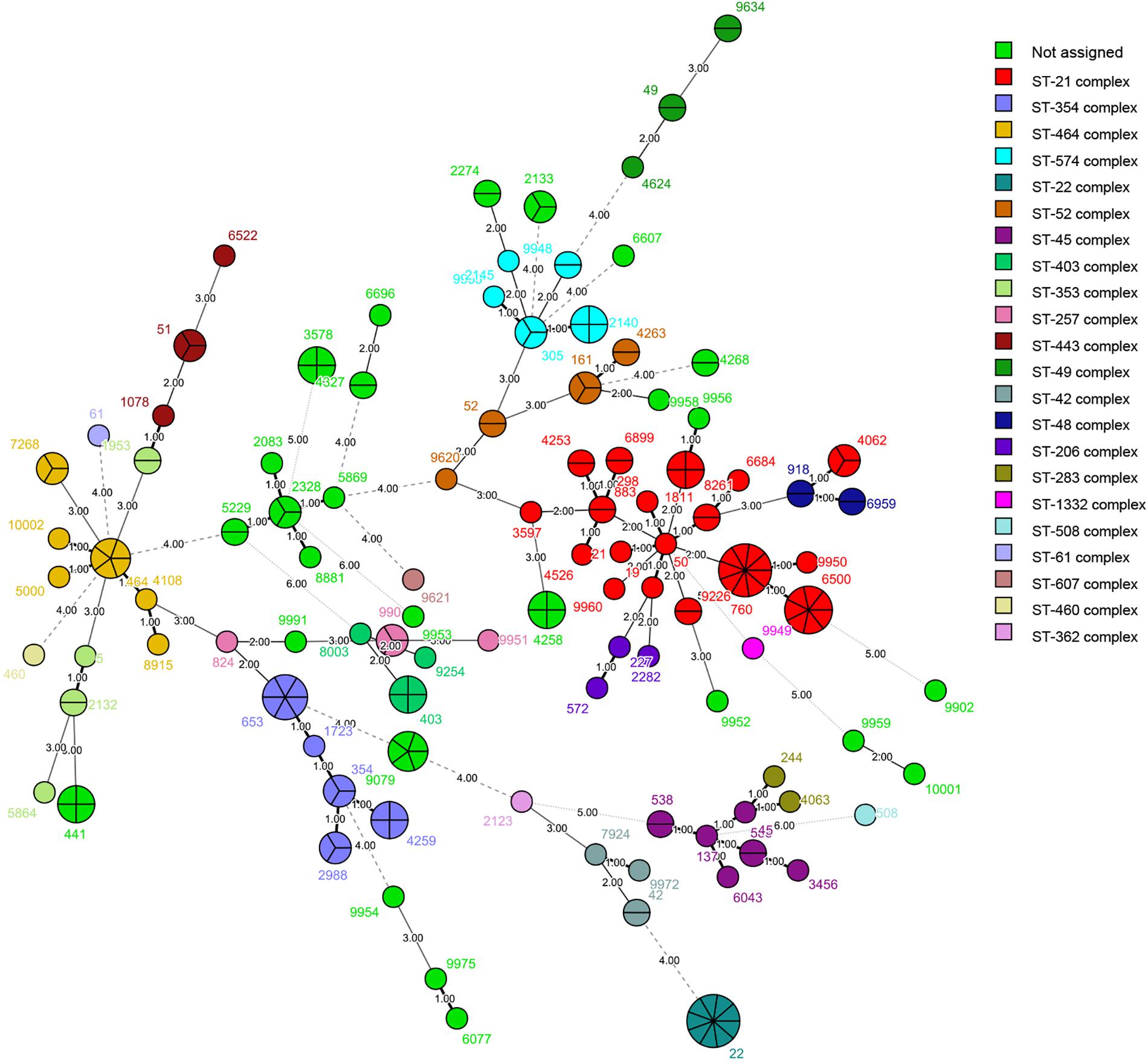 Figure 1. Phylogenetic analysis. Minimum spanning tree (MST) of MLST data of 200 C. jejuni human isolates collected in 2017 and 2018 in Beijing, China. Each color represents one clonal complex (CC). Isolates are represented by circles, and the size of the circle is proportional to the number of isolates. Branches and numbers represent allelic differences between isolates. 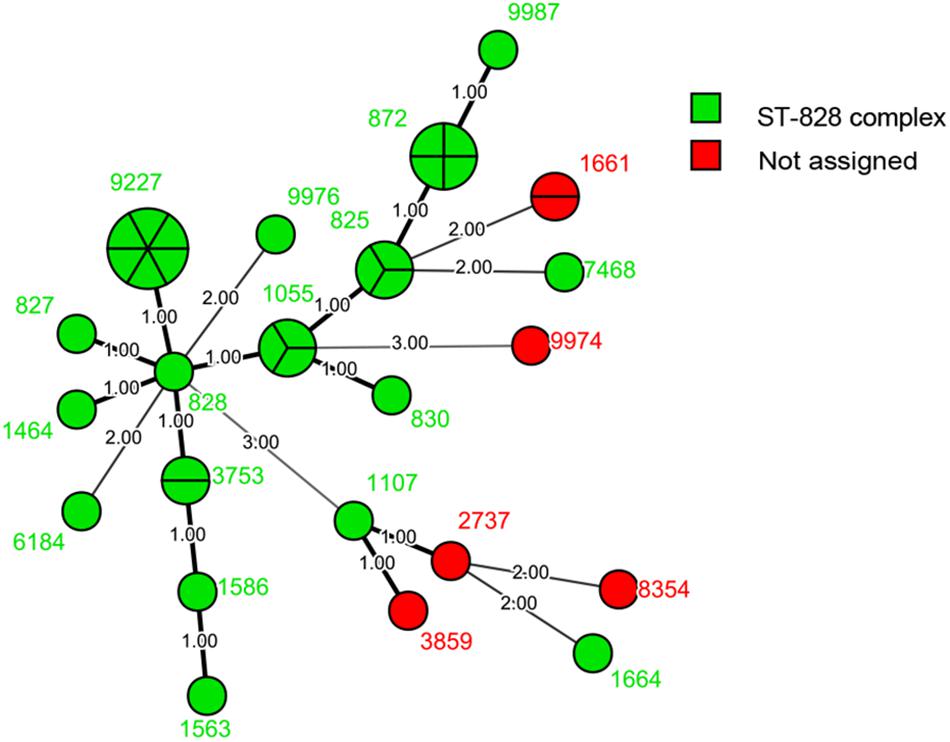 Figure 2. Phylogenetic analysis. Minimum spanning tree (MST) of MLST data of 36 C. coli human isolates collected in 2017 and 2018 in Beijing, China. Green represents the ST-828 complex and red represents isolates that do not belong to any known clonal complex. Isolates are represented by circles, and the size of the circle is proportional to the number of isolates. Branches and numbers represent allelic differences between isolates.

Figure 3. Dendrogram of MLST data of C. jejuni human isolates collected from this study and other district of China, Showed the number of differences in MLST alleles. The similarity coefficient were calculated using the categorical (difference) and complete linkage for the cluster analysis.

Figure 4. Dendrogram of MLST data of C. coli human isolates collected from this study and other district of China, showed the number of differences in MLST alleles. The similarity coefficient were calculated using the categorical (difference) and complete linkage for the cluster analysis.

Comparison of Isolates With Those From Other Countries in Asia 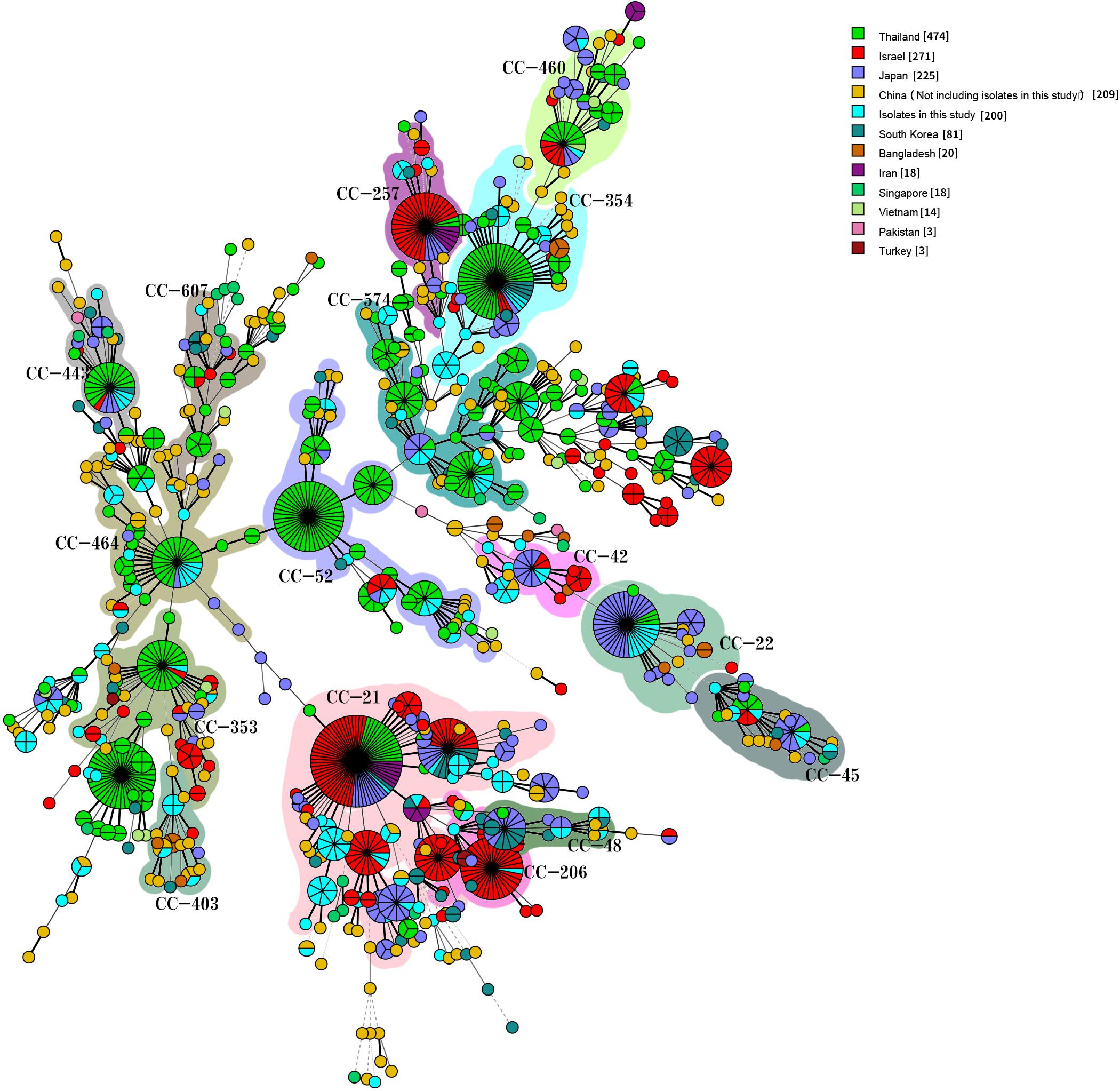 Figure 5. Genetic relationships among the 200 clinical isolates C. jejuni in this study and 1,336 isolates C. jejuni from Asia in the pubmlst database (Data taken time: January 18, 2019). A minimum spanning tree was reconstructed based on CCs from this study and the MLST database. The size of circles is proportional to the number of isolates, and the sources of the isolates are colored as indicated. Shadow zones in different colors represent different clonal complexes. 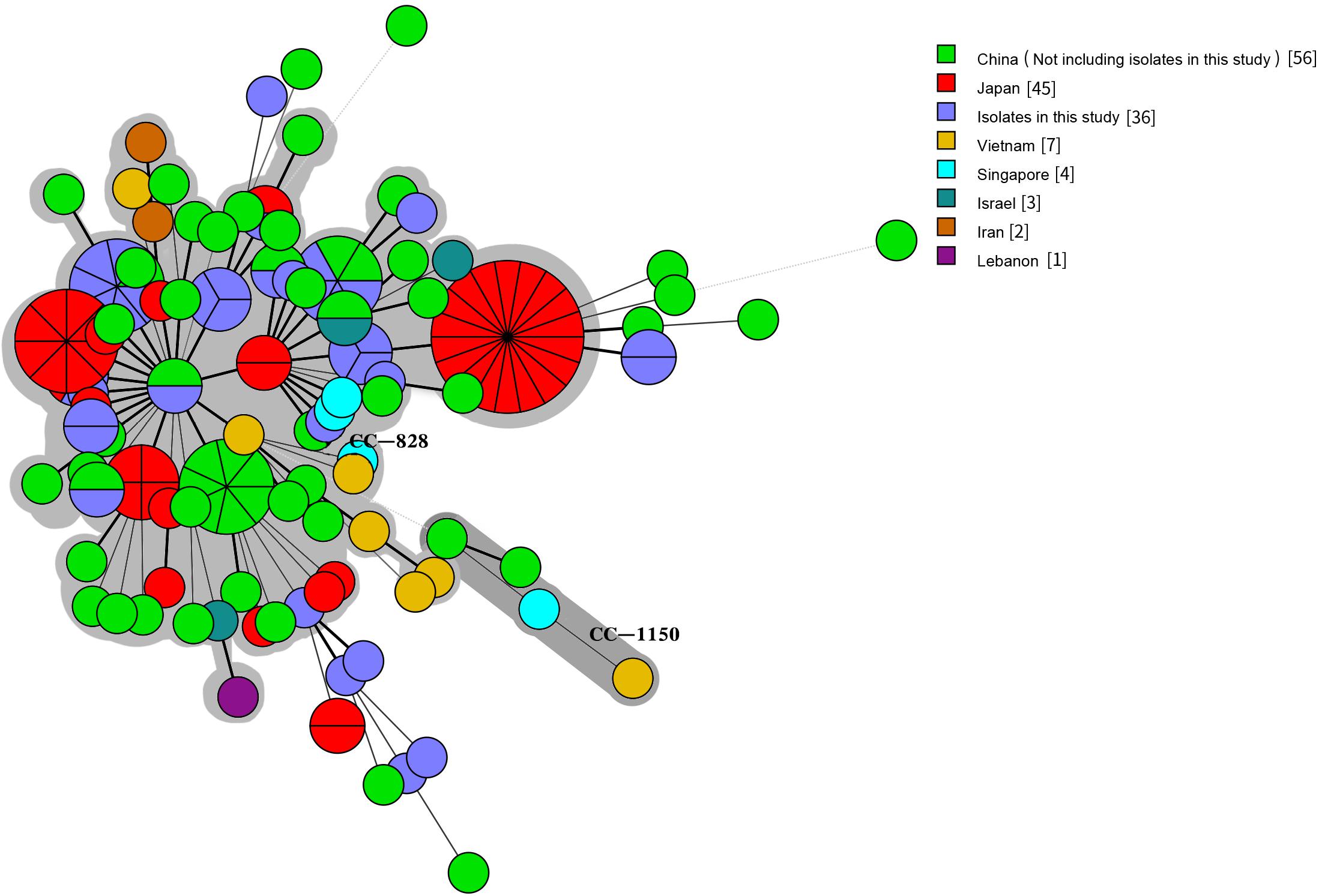 Figure 6. Genetic relationships among the 36 clinical isolates C. coli in this study and 118 isolates C. coli from Asia in the pubmlst database (Data taken time: January 18, 2019). A minimum spanning tree was reconstructed based on CCs from this study and the MLST database. The size of circles is proportional to the number of isolates, and the sources of isolates are colored as indicated. Shadow zones in different color represent different clonal complexes. 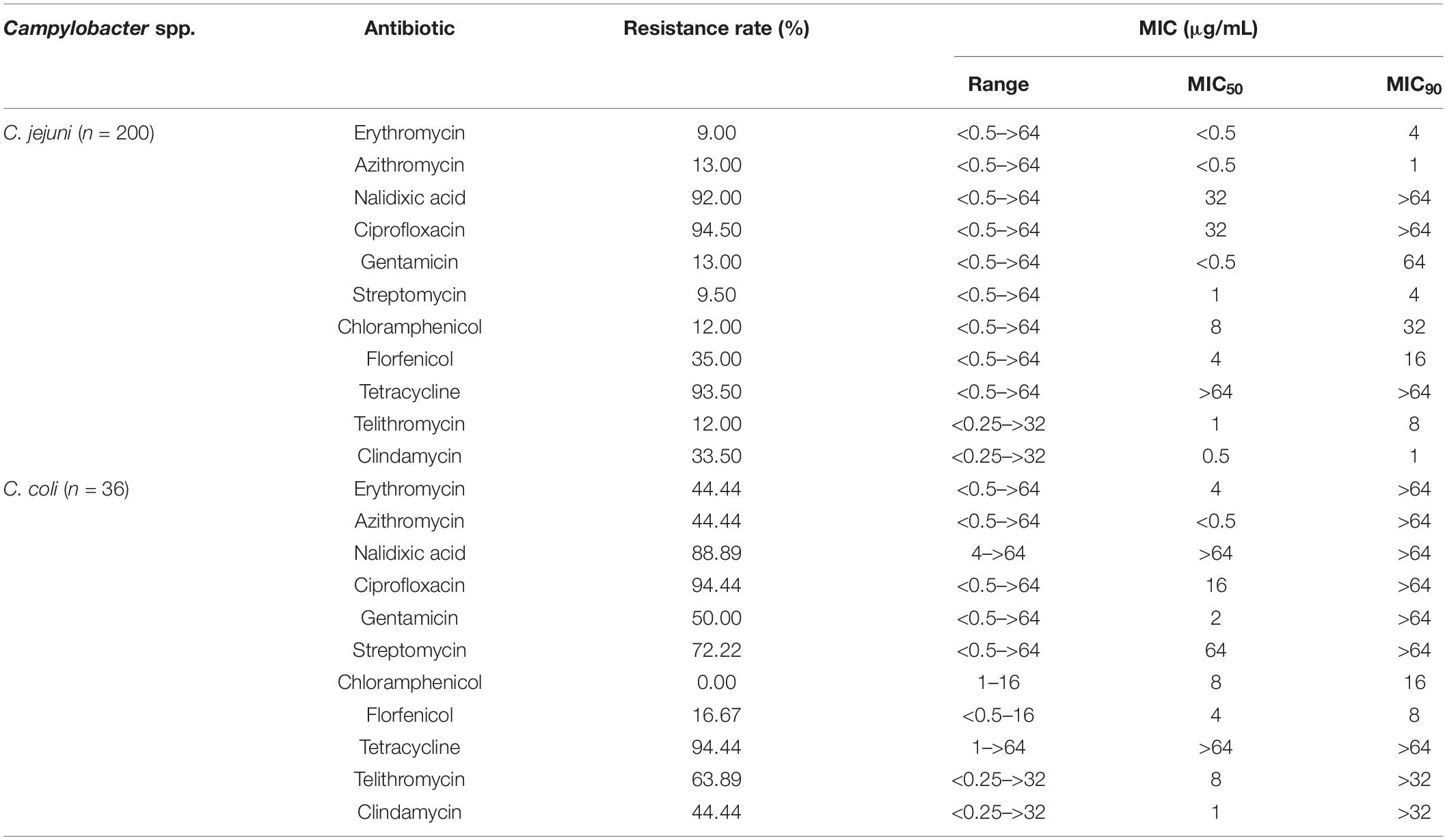 ST-2274 of C. jejuni and ST-9227 of C. coli caused outbreaks of foodborne diseases resulting in seven and three patients with diarrhea in Beijing, respectively (Qu et al., 2019; Li et al., 2020). ST-2274 was found in Thailand and Guizhou province and Shanghai city of China. ST-9227 has not been reported in the PubMLST database in Asia except in Beijing. An outbreak of Guillain Barré syndrome caused by C. jejuni was previously reported in Changchun City, Jilin Province, China, and the strains isolated from patients were all ST-2993 (Zhang et al., 2010b). However, no other ST-2993 isolates in the PubMLST database were from other country of Asia.

An isolate of C. coli (ST-825, CC-828) sensitive to all antimicrobials was isolated from an adult man who claimed to have eaten seafood at home (unpublished data). We are very curious about this result, because in addition to this isolate, other C. coli isolates were resistant to two or more classes of antimicrobials. Therefore, the detection of resistance genes in C. coli is the focus of our next research.

All relevant data is contained within the article. All datasets generated for this study are included in the article/Supplementary Material, further inquiries can be directed to the corresponding authors.

The protocol was approved by the ethics committee of Beijing Center for Disease Prevention and Control (Beijing CDC). Participants received information on the study’s purpose and of their right to keep information confidential. Written consent was obtained from each participant and children’s parents or their guardians.

JJ and XM were involved in the collection of isolates and collected the clinical data. YL, XZ, and PZ performed the molecular subtyping and antibiotic susceptibility tests. XZ, JJ, and PZ performed the data analysis. PZ, XZ, ZS, XM, and QC designed the study, drafted, and revised this manuscript. All authors contributed to the article and approved the submitted version.

This work was supported by the National Key Research and Development Program of China (Grant No. 2017YFC1601500) and the Cultivation Fund of Beijing Center for Disease Prevention and Control, Beijing Research Center for Preventive Medicine (Grant No. 2019-BJYJ-04).

The Supplementary Material for this article can be found online at: https://www.frontiersin.org/articles/10.3389/fmicb.2020.554784/full#supplementary-material

Copyright © 2020 Zhang, Zhang, Liu, Jiang, Shen, Chen and Ma. This is an open-access article distributed under the terms of the Creative Commons Attribution License (CC BY). The use, distribution or reproduction in other forums is permitted, provided the original author(s) and the copyright owner(s) are credited and that the original publication in this journal is cited, in accordance with accepted academic practice. No use, distribution or reproduction is permitted which does not comply with these terms.