Methods: Clinical manifestation, imaging, and microbiological data were retrieved from the Chang Gung Research Database, the largest electronic medical record-based database in Taiwan. Patients with bronchiectasis during 2001–2016 were included. Cox proportional hazard model was employed to compare outcomes between patients with negative and positive NTM isolates after 1:1 propensity score matching.

Aspergillus is a major fungal genus in bronchiectasis and may be correlated with poor lung function (Mac Aogain et al., 2018; Maiz et al., 2018). Chronic antibiotic treatment may be one of the most significant risk factors for positive fungal isolation (Maiz et al., 2015, 2018). However, the role of fungal isolates in bronchiectasis, except for causing invasive infections, is unclear. In our previous report, patients with positive NTM isolates, positive P. aeruginosa isolates, and concomitant NTM and P. aeruginosa isolates exhibited high BSI scores and frequent exacerbations and emergency department (ED) visits (Hsieh et al., 2018c).

In the current study, we investigated the clinical implications of concomitant NTM, P. aeruginosa, and fungal isolates in patients with non-CF bronchiectasis. The results of this study add to the knowledge of NTM in bronchiectasis.

In this study, we used the Chang Gung Research Database (CGRD) to construct a multicenter bronchiectasis cohort for the period of 2001–2016. The CGRD is an electronic medical record database of Chang Gung Medical Foundation, which is the largest hospital system in Taiwan, comprising three medical centers (Linkou, Taipei, and Kaohsiung branches) and four regional hospitals (Taoyuan, Keelung, Chiayi, and Yunlin branches).1 These hospitals are located across Taiwan. The data in the CGRD include demographic data, inpatient and outpatient records, diagnostic codes, medications, and reports of microbiological, imaging study, and functional examination data (Shao et al., 2019; Huang et al., 2020).

We searched the electronic medical records in the CGRD between 1 January 2001, and 31 December 2016, and retrieved data of patients with a diagnosis of bronchiectasis. The bronchiectasis diagnosis was recorded according to the International Classification of Diseases Clinical Modification code 494.0 or 494.1 (ninth revision) or J47 (tenth revision). The diagnosis of bronchiectasis was confirmed by the interpretation of chest radiography or high-resolution computed tomography (HRCT), which was independently reviewed by a radiologist (Nicotra et al., 1995; Amaral et al., 2015). Patients with at least two primary bronchiectasis diagnoses on different dates during outpatient visits or one diagnosis during hospitalization were included in the cohort. The index date was defined as the date of the first bronchiectasis diagnosis. The cohort only included patients aged ≥20 years. Demographic data were collected. Patients who met the following criteria were excluded as: previous diagnosis of pulmonary tuberculosis, sputum not evaluated for NTM isolation, incomplete medical records, and missed follow-up.

We defined acute exacerbations (AEs) as an event that was clinically diagnosed by a physician and required an antibiotic prescription for acute onset of increasing cough, worsening dyspnea, and changes in sputum characteristics (e.g., volume, consistency, and purulence). Furthermore, we recorded the frequency of AEs, ED visits, as well as hospitalization; ventilator usage due to bronchiectasis AE; and all-cause mortality (Hsieh et al., 2018c).

A nonbalanced distribution of clinical characteristics between the study patients with negative and positive NTM isolates would have seriously confounded the results. Therefore, we performed propensity score matching to make the two groups comparable. The propensity score was the predicted probability of positive NTM isolates based on logistic regression. Covariates included in the propensity score were variables theoretically and clinically related to outcomes, including demographics (age and sex), pulmonary function, extensions in HRCT reports, etiology, comorbidities, and Bronchiectasis Etiology and Comorbidity Index (BACI) scores at baseline (Table 1). The groups were matched at a 1:1 ratio by using a greedy nearest-neighbor algorithm with a caliper of 0.2. 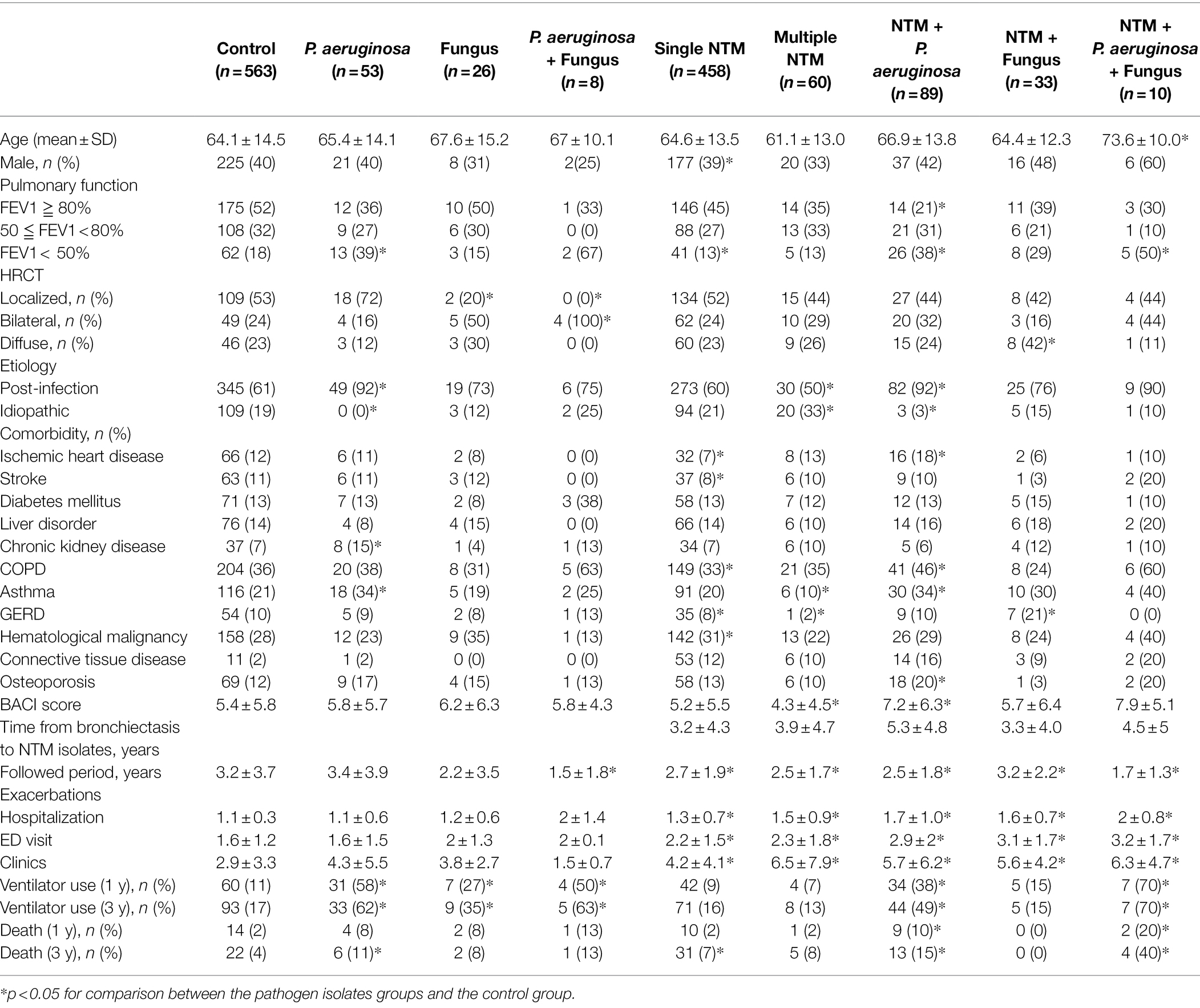 Table 1. Clinical characteristics of non-CF bronchiectasis patients in the six groups according to the pathogen isolated from sputum samples. 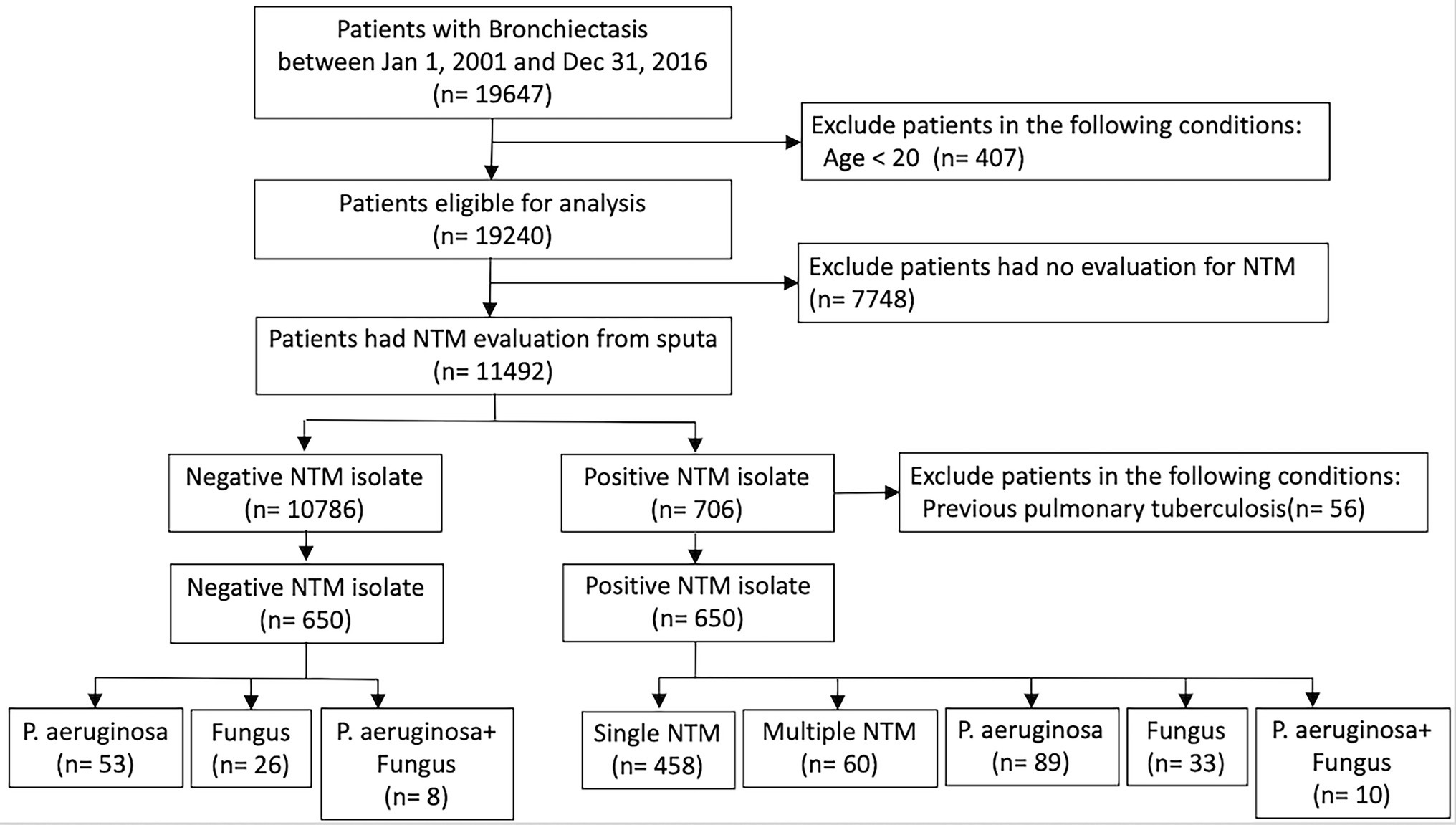 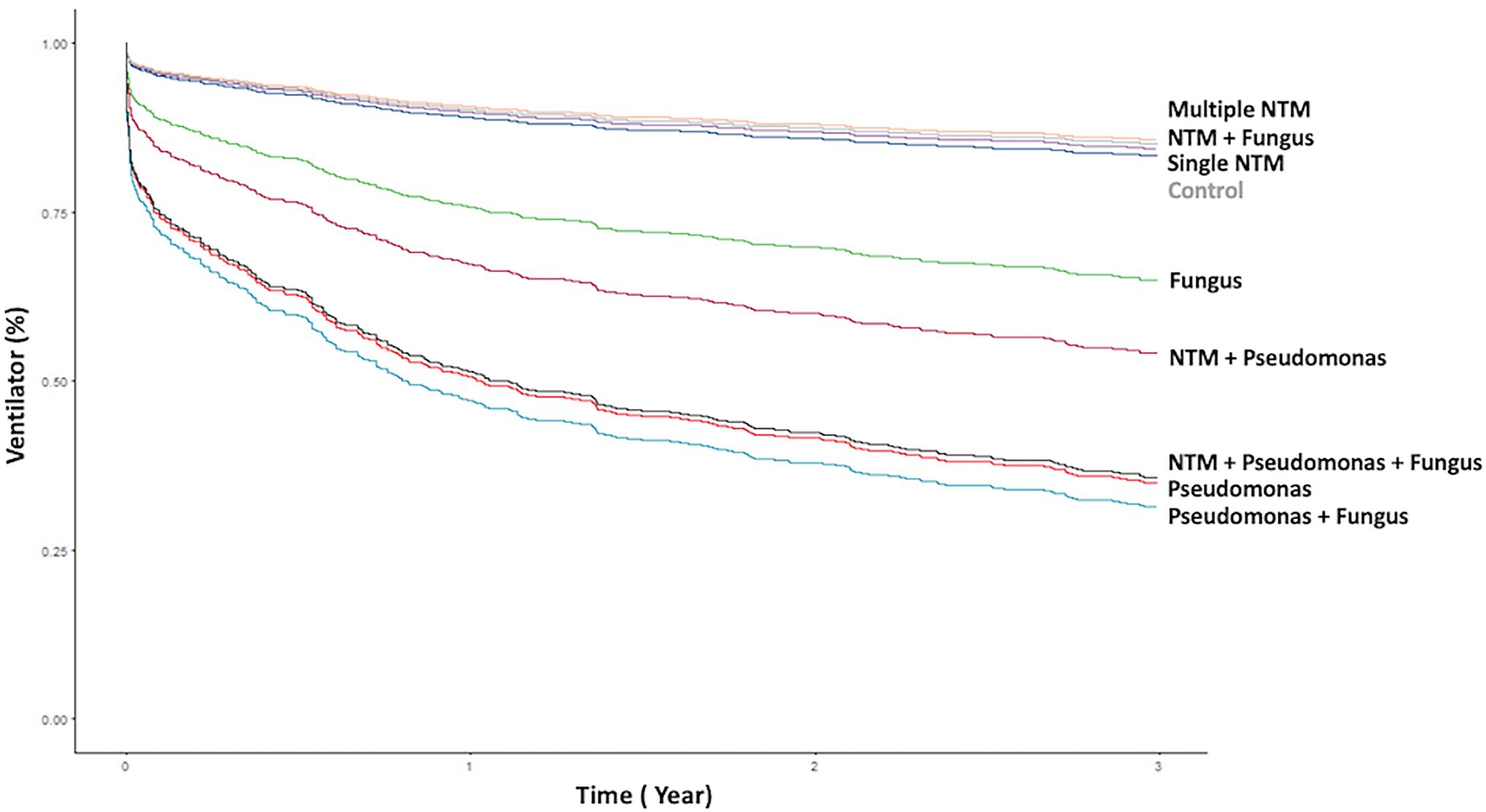 Figure 2. Kaplan–Meier curve of ventilator use according to different pathogen isolates from sputum. NTM, nontuberculous mycobacteria.

Table 2. Hazzard ratio of ventilator use according to different pathogen isolates from sputum.

Table 3. Hazzard ratio of mortality according to different pathogen isolates from sputum.

The present study is the multicenter observational study to investigate the clinical implications of NTM and other concomitant pathogens identified from sputum samples in patients with non-CF bronchiectasis over one-decade period in Taiwan. Patients with positive NTM, either combined with P. aeruginosa or fungus isolates, demonstrated significantly more frequent exacerbations. Having P. aeruginosa isolates, concomitant NTM and P. aeruginosa isolates, concomitant NTM, P. aeruginosa, and fungus isolates were associated with significantly poorer pulmonary function. These patients also exhibited independently higher risk of respiratory failure and mortality. More importantly, our results demonstrated that not only polymicrobial isolates patients, who had single or multiple NTM isolates were independent predictor for mortality.

In one meta-analysis published in 2014, the prevalence of NTM in patients with bronchiectasis was 9.3%, and this condition has been mainly reported in Asian populations (Chu et al., 2014; Zhang et al., 2019). The clinical implications of NTM in patients with chronic respiratory disease are controversial. Faverio et al. demonstrated that patients with pulmonary NTM disease may have lower disease severity, lower BSI score, and fewer exacerbations than patients with chronic Pseudomonas infection (Faverio et al., 2016). Furthermore, Kwak et al. (2020) reported in a Korean study that NTM pulmonary disease in bronchiectasis worsened radiographic lesions but did not affect the BSI score (Kwak et al., 2020). However, these studies did not analyze patients with concomitant NTM and other pathogen isolates, including P. aeruginosa and fungus, which also have clinical implications in bronchiectasis. Huang et al. determined that patients with chronic obstructive pulmonary disease (COPD) who had NTM isolates were more likely to experience exacerbations compared with those without isolates (Huang et al., 2012). Moreover, they found that patients with COPD who had multiple NTM isolates exhibited a greater decline in FEV1 than did those with a single NTM or no isolates (Huang et al., 2012). Patients with bronchiectasis with positive NTM isolates had significant FEV1 declines and frequent annual exacerbations, ED visits, and hospitalizations (Hsieh et al., 2018c). Furthermore, concomitant NTM and P. aeruginosa isolates in non-CF bronchiectasis was associated with major pulmonary function decline and considerable disease severity (Hsieh et al., 2018c). Because it consisted of a small sample size, we could not further investigate differences in the clinical implications of single and multiple NTM isolates. In current study, 19,647 patients diagnosed with bronchiectasis from 2001 to 2016 were obtained from the CGRD database, and after application of the exclusion criteria, 1,300 patients were enrolled for the analysis. We demonstrated that among patients, having positive NTM isolates, combined with either P. aeruginosa or fungus isolates, was positively correlated with frequent exacerbations, including hospitalizations, ED visits, and clinic visits.

NTM causing lots of human diseases, including chronic pulmonary disease, disseminated disease in severely immunocompromised patients, skin, and soft tissue infection, superficial lymphadenitis (To et al., 2020). Pulmonary disease accounts for 80–90% of NTM-associated diseases, the most common species were Mycobacterium avium complex, Mycobacterium kansasii, and Mycobacterium abscessus (Johnson and Odell, 2014; To et al., 2020; Zhu et al., 2021). Infection with Mycobacterium abscessus may be associated with worse clinical outcomes for the high resistance rate to macrolides. Similar to previously reported studies, mycobacterium avium–intracellulare complex was the most common NTM species found in our patients, followed by M. fortuitum and M. abscessus. There was no NTM species correlated to respiratory failure. But we demonstrated that patients with Mycobacterium avium complex or multiple NTM isolates had independently higher mortality.

P. aeruginosa is a well-documented pathogen in bronchiectasis, which is associated with increased risk of death, hospital admissions, and exacerbations (Rogers et al., 2014; Finch et al., 2015). Furthermore, chronic colonization by P. aeruginosa is a crucial aspect of both BSI and FACED score (Chalmers et al., 2014; Martinez-Garcia et al., 2014). Aspergillus spp. is clinically important in severe asthma, COPD, and CF (Baxter et al., 2013; Leung et al., 2017; Mac Aogain et al., 2018; Lin et al., 2020). In bronchiectasis, Aspergillus spp. may correlate with poor lung function, and chronic antibiotic treatment may increase the risk of positive fungal isolation.17, 19 Moreover, Aogáin et al. found that A. fumigatus and A. terreus are dominant in patients in Asia and Europe, respectively, and the latter is associated with exacerbations (Mac Aogain et al., 2018). However, the role of fungal isolates in bronchiectasis is unclear. In most cases, fungi are usually isolated with other pathogens, such as NTM or P. aeruginosa, making the determination of their pathogenic significance difficult (Maiz et al., 2018). In the current study, we demonstrated that the risk of respiratory failure were higher in patients with fungus isolates; concomitant P. aeruginosa and fungus isolates although the risk of mortality were not significant. Moreover, in patients with concomitant NTM, P. aeruginosa, and fungus isolates, the HRs for ventilator use and death were 5.9 and 7.43 times those of the control group. However, the clinical importance of fungus in bronchiectasis was not conclusively demonstrated in our study because of the retrospective nature of our study design and the prevalence of fungus isolates in airway specimen was relatively low in stable bronchiectasis without a suspicion of invasive infection.

Our study had several inherent limitations. First, this was a retrospective study and we could not confirm the bronchiectasis diagnosis because not all our patients were diagnosed using HRCT. The CGRD database is based on real-world clinical practice, and clinicians made the diagnoses of bronchiectasis according to symptoms, history, and radiology reports, which may not be considered a reliable diagnostic tool now. Second, information on some parameters was lacking or incomplete in the CGRD, and hence, we could not derive the BSI. Third, the CGRD could not provide precise pulmonary function, spirometry intervals were inconsistent among patients, and lung function decline could not be calculated. Fourth, the prevalence of fungal isolates in the airway specimen was relatively low in patients with stable bronchiectasis. Therefore, a selection bias may be present and that would diminish the generalizability of the study results. Fifth, the CGRD cohort was mainly obtained from tertiary medical center hospitals, which might mainly treat patients with severe bronchiectasis.

In summary, patients with non-CF bronchiectasis with positive NTM isolates from sputum had frequent exacerbations and were independent predicting factor for mortality. NTM was also associated with respiratory failure while concomitant isolated with P. aeruginosa, and fungus. Further prospective, large-scale studies are warranted to validate our results.

The studies involving human participants were reviewed and approved by Institutional Review Board of Chang Gung Memorial Hospital approved this study (IRB number: 201800712B0C502). Written informed consent for participation was not required for this study in accordance with the national legislation and the institutional requirements.

The Supplementary Material for this article can be found online at: https://www.frontiersin.org/articles/10.3389/fmicb.2022.868435/full#supplementary-material

Copyright © 2022 Lin, Huang, Hsieh, Fang, Lo, Lin, Huang, Yeh, Wang and Lin. This is an open-access article distributed under the terms of the Creative Commons Attribution License (CC BY). The use, distribution or reproduction in other forums is permitted, provided the original author(s) and the copyright owner(s) are credited and that the original publication in this journal is cited, in accordance with accepted academic practice. No use, distribution or reproduction is permitted which does not comply with these terms.