Mangrove is a unique marine ecosystem growing in the intertidal zone of tropical and subtropical coast, with the characteristics of hypoxia tolerance, high salinity, and high humidity. In order to discover novel leading compounds with potent phytotoxicity, seven pairs of azaphilones E/Z isomers, isochromophilone H (1a/1b), sclerotiorins A and B (2a/2b and 3a/3b), ochlephilone (4a/4b), isochromophilone IV (5a/5b), isochromophilone J (6a/6b), and isochromophilone I (7a/7b), were isolated from the culture broth of the mangrove-derived fungus, the Penicillium sclerotiorum HY5, by various chromatographic methods. Among them, 1a, 1b, 2a, 3a, 4a, 5a, 6a, and 6b were new compounds. Their chemical structures and absolute configurations were elucidated based on high resolution electrospray ionization mass spectroscopy (HRESIMS), 1D/2D nuclear magnetic resonance (NMR) spectroscopic analysis, and comparisons of electronic circular dichroism (ECD) data. Compounds 3, 4, and 7 exhibited potent phytotoxicity against the growth of radicle and plumule on Amaranthus retroflexus L., with EC50 values ranging from 234.87 to 320.84 μM, compared to the positive control glufosinate-ammonium, with EC50 values of 555.11 μM for radicle, and 656.04 μM for plumule. Compounds 4 and 7 also showed inhibitory effects on the growth of velvetleaf (Abutilon theophrasti Medikus), with EC50 values ranging from 768.97 to 1,201.52 μM. This study provides new leading compounds for the research and development of marine-derived bioherbicides. 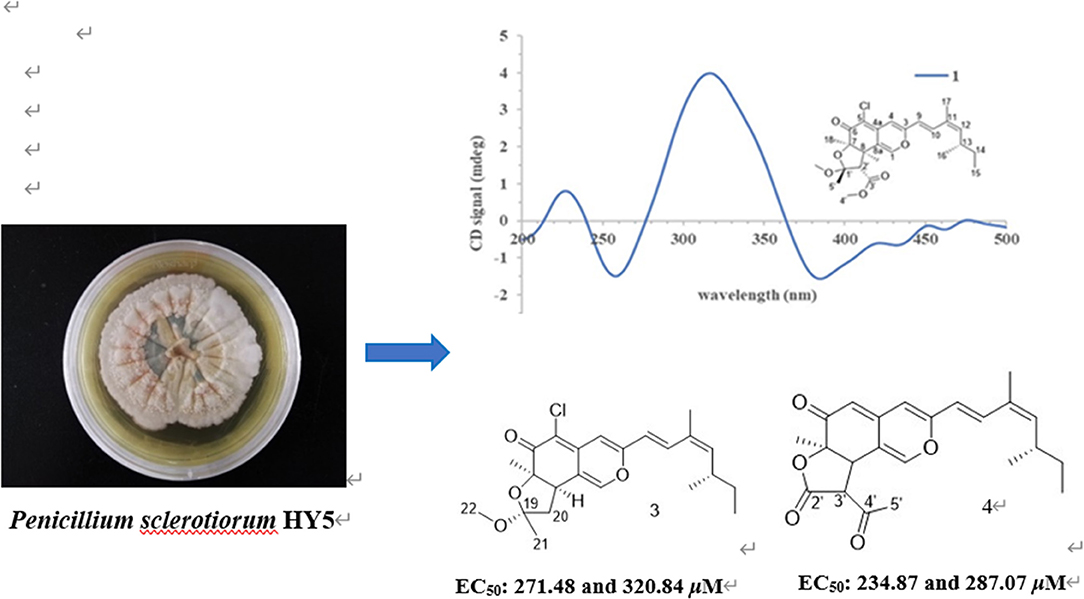 Weeds are common, pernicious, and troublesome plant species, which can cause serious yield reduction and inferior quality in crop production. It is estimated that the production loss caused by weeds is approximately 34% of the crop yield worldwide (Harding and Raizada, 2015; Shi et al., 2020). In the present situation, control weeds in farmland on a global scale are mainly dependent on chemical treatments (Travaini et al., 2016; Vurro et al., 2018); however, there are many long-term problems with the intensive application of agrochemical herbicides, such as environmental pollution, pesticide residue accumulation, and the emergence of weed resistance, which increase the difficulty of weeds control management (Kim et al., 2020; Shi et al., 2020). With the continuous discoveries of a great number of biocontrol microbial resources, exploration of microbes with excellent biological activity from extreme conditions such as marine-derived microorganisms, in recent years, have attracted much attention of scientists (Shen et al., 2020). Marine surroundings provide abundant microbial resources because of their geographic and climatic characteristics. These features make it become an important field for discovering bioactive natural products with agricultural applications (Yang et al., 2015; Carroll et al., 2020).

Azaphilones are a class of fungi-derived polyketide secondary metabolites with novel structures having an oxabicyclic skeleton and can be divided into 18 different categories, which have numerous chiral centers and flexible side chains (Gao et al., 2013; Makrerougras et al., 2017). Previous reports have shown that they exhibited broad-spectrum activities in many biological tests, including antimicrobial, antiviral, anti-inflammatory, antioxidant, cytotoxic, hypoglycemic, and nematocidal activities (Luo et al., 2018; Wang et al., 2020). More than 430 azaphilones, isolated from both marine and terrestrial fungi, have been reported until 2019, representing an important class of natural products (Qian et al., 2019). However, most of the azaphilones were utilized for drug development, and their agricultural bioactivities need to be explored.

During our ongoing search for phytotoxic compounds with agricultural applications (Huang et al., 2018; Zhao et al., 2019, 2020), the mangrove-derived strain Penicillium sclerotiorum HY5 attracted our attention because its culture extracts demonstrated potent phytotoxicity toward Amaranthus retroflexus L., and the high-performance liquid chromatography (HPLC) profile highlighted a rich array of ultraviolet absorption peaks similar to that of azaphilones. Further chemical investigation on the fungal extracts resulted in the isolation of seven pairs of azaphilones E/Z isomers, isochromophilone H (1a and 1b), sclerotiorin A (2a and 2b), sclerotiorin B (3a and 3b), ochlephilone (4a and 4b), isochromophilone IV (5a and 5b), isochromophilone J (6a and 6b), and isochromophilone I (7a and 7b; Figure 1). Here, we report the isolation, structural elucidation, and phytotoxic evaluation of isolated azaphilones. 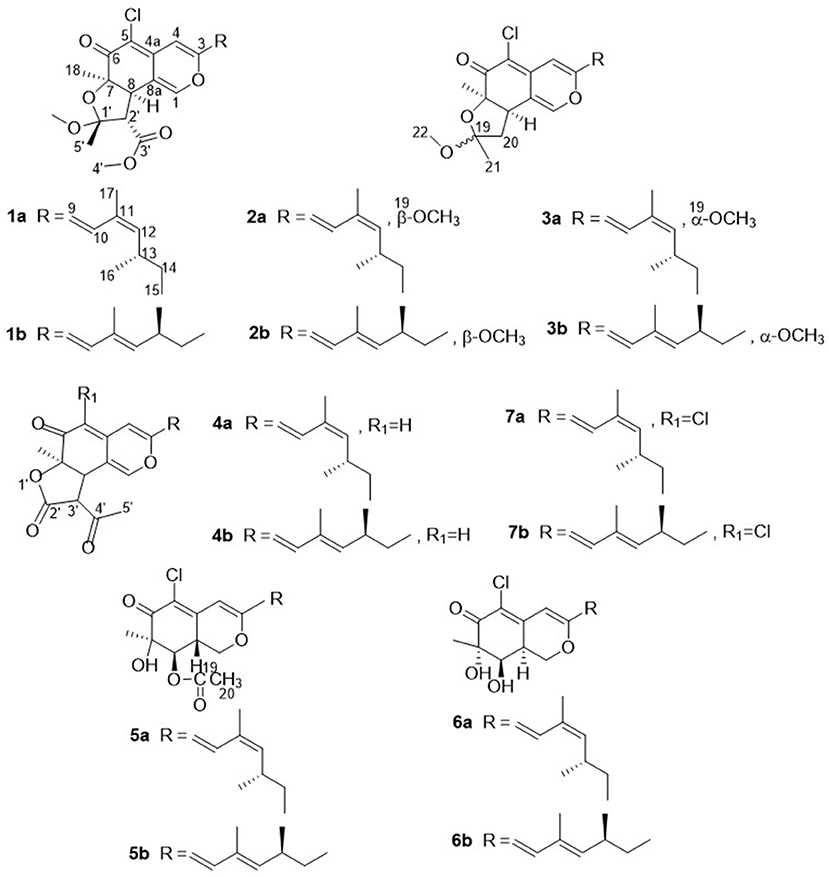 The studied strain was isolated from an unidentified mangrove sample collected from coastal marine habitats of the South China Sea, Haikou, China, in May 2017. This strain was identified as P. sclerotiorum HY5 by amplifying and analyzing its internal transcribed spacer (ITS) sequence, as well as morphological features. The ITS sequence of this fungus was deposited at the GenBank database (accession number MG827186), and the isolated strain was preserved in the Marine Agriculture Research Center, Tobacco Research Institute of Chinese Academy of Agricultural Sciences, Qingdao, China. 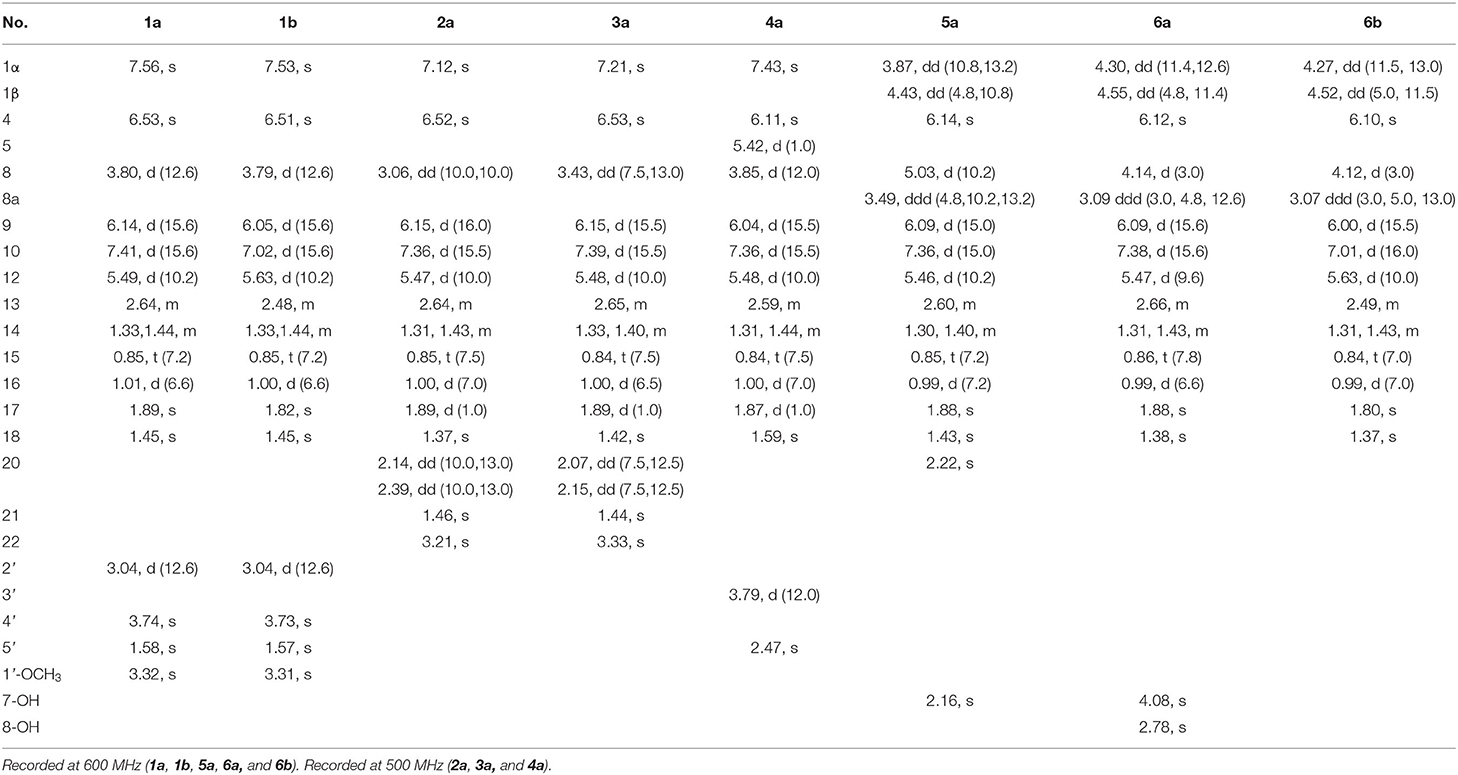 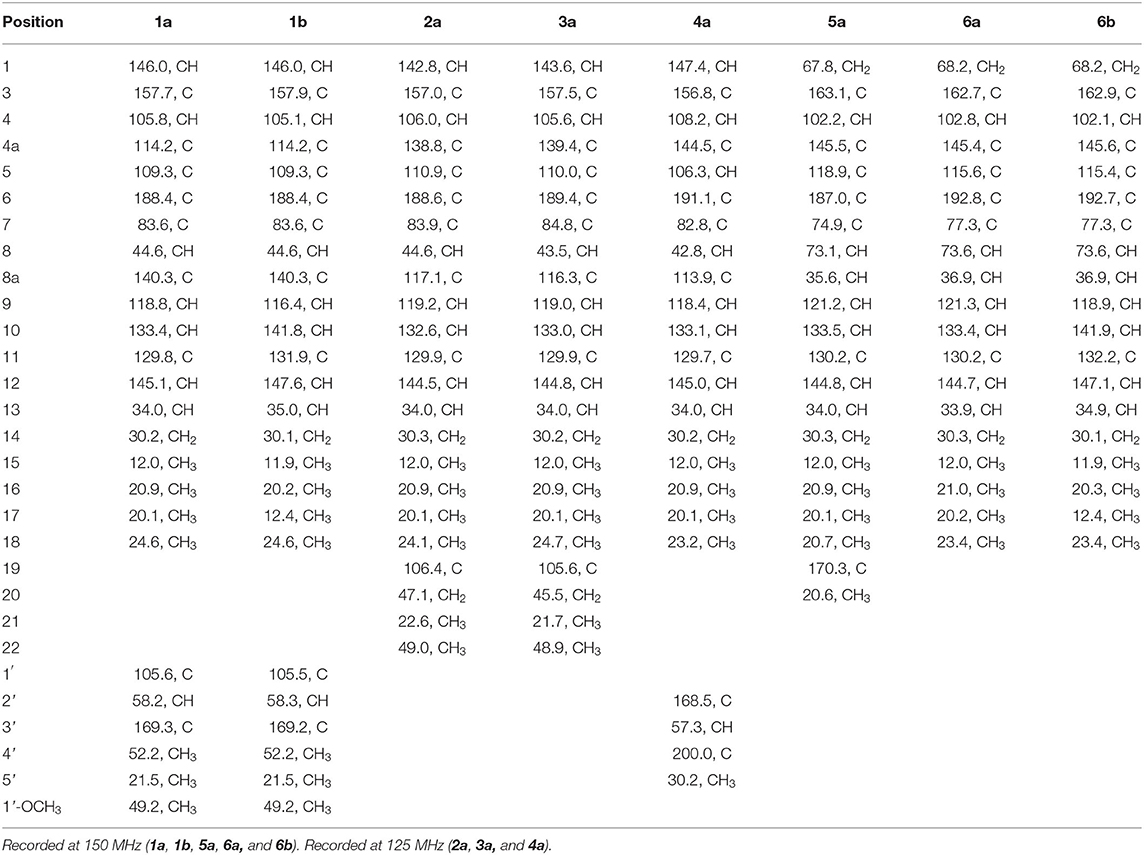 The tested seeds were pre-incubated in 9-cm diameter Petri dishes with 5 mL of distilled water for about 5 h at 25°C. After that period, the seeds of the target weeds were disinfected with 5% sodium hypochlorite for 10 min and rinsed with distilled water. One layer of sterile filter paper was placed at the base of each Petri dish (for A. retroflexus L., 12-well plates were used). Then, 3 mL (for A. retroflexus L., 330 μL) of the methanolic solution containing compounds were dropped on the filter paper. The final concentrations of tested compounds were 500, 250, 125, 62.5, and 31.25 μg/mL, respectively. The equivalent sterilized water was added to each well and Petri dish after the escape of methanol. Twenty-five (for A. retroflexus L., 10) viable seeds of weeds were placed on a filtrate paper. The herbicide glufosinate-ammonium was used as a positive control, and the methanol solution was then used as solvent control. Lids were sealed with Parafilm and incubated at 28°C, with 12 h supplemental light provided by 400 W Philips lamps and 26°C with 12 h darkness per day. The radicle and plumule lengths were measured and inhibition rates were calculated after 4 days. All treatments were carried out in triplicate. The experimental results are expressed as the mean ± SD, and the EC50 values were calculated from the regression equations.

The inhibition rate (expressed as a percentage) was calculated as follows:

Structure Elucidation of the Isolated Compounds 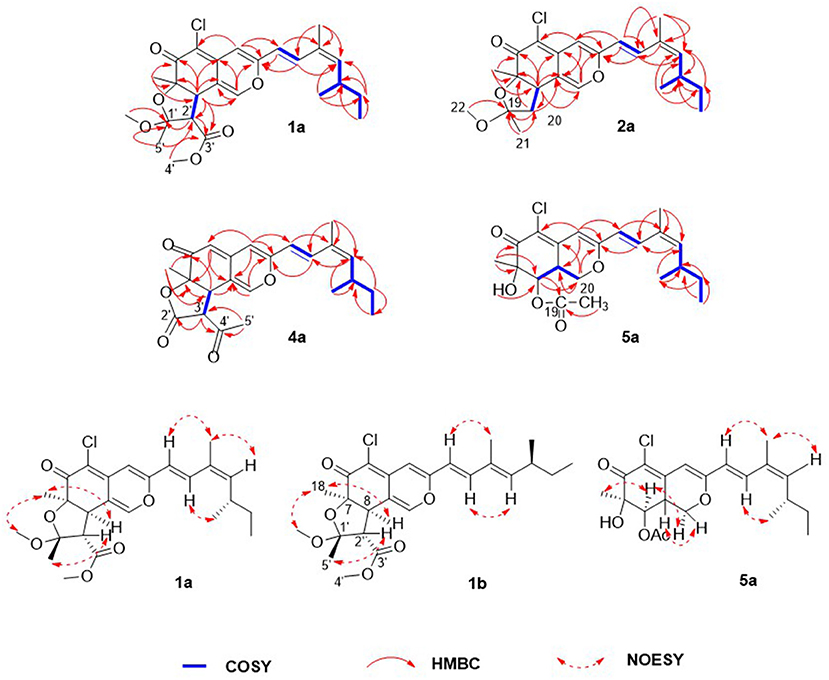 The relative configuration of 1a was established by NOESY correlations (Figure 2, Supplementary Figure S6) and corresponding proton coupling constants (Luo et al., 2018; Qian et al., 2019). The large coupling constant (J = 12.6 Hz) between H-2' and H-8 suggested these two protons were on the opposite orientation. The NOESY correlations observed for H3-18, H-8, and 1'-OCH3 indicated that these protons were located on the same face. Thus, the stereochemistry of the azaphilone skeleton of 1a was determined. Furthermore, the coupling constant between H-9 and H-10 (J = 15.6 Hz) in addition to the NOESY correlations between H-9/H-12 and 17-CH3, and between H-10 and 16-CH3 illustrated that the double bond at C-9 and C-10 was E configuration, and C-11/C-12 was Z configuration. Therefore, the relative configuration of 1a, differing from that of isochromophilone C, was assigned as rel-(7R,8R,9E,11Z,1′R,2′S), and given the name as isochromophilone H.

Compounds 2–7 were also isolated as six pairs of C-11 E/Z isomers. Among them, 2a, 3a, 4a, 5a, and 6a were new compounds with 11-(Z) configuration, which were confirmed by NOESY correlations of H-9/H-12 and 17-CH3, and H-10/16-CH3. The relative configuration of 5b was also determined for the first time by the NOESY correlations (Supplementary Figure S34), combined with the proton coupling constants. The coupling constants calculated for H-8 (J = 10.2 Hz) and H-8a (J = 4.8, 10.2, and 13.2 Hz), indicated the ax/ax relationship of these two protons. The NOESY correlations observed for H-1α/H3-18 and H-8 suggested that these protons were cofacial. Accordingly, the relative configuration of 5b was established as rel-(7R,8R,8aR). 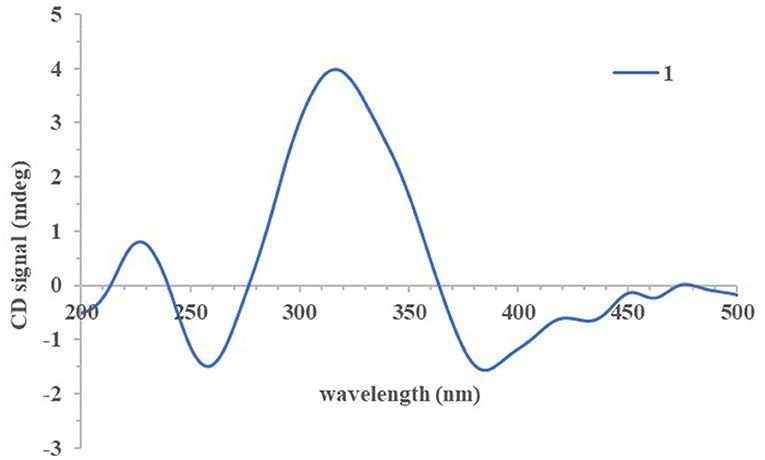 Numerous studies have reported that azaphilones have broad-spectrum biological activities. However, there were relatively few reports about their phytotoxic activity of them. Chaetomugilin A, D, S, and O, four chlorine-containing azaphilone derivatives, isolated from the endophytic Chaetomium globosum TY1, showed a higher response index and lower IC50 values to eight species of herbaceous plant seeds than positive control glyphosate (Wang et al., 2017). Chaetomugilin D and J, isolated from the EtOAc extract of the fermentation medium of C. globosum, exhibited phytotoxicity to lettuce seeds, with IC50 values for root inhibition of 24.2 and 22.6 ppm, respectively, while those for shoot inhibition were 27.8 and 21.9 ppm, respectively (Piyasena et al., 2015). Acetosellin, isolated from large-scale cultures of the fungus Cercosporella acetosella, inhibited the growth of the root of Lepidium sativum and Zea mais at 640 μM (Gianluca et al., 2002). In the present work, all the isolated compounds were evaluated for their phytotoxicity against four weeds species (A. fatua L., L. perenne L., A. retroflexus L., A. theophrasti Medikus) in farmland. The experimental results indicated that sclerotiorin B (3), ochlephilone (4), and isochromophilone I (7) exhibited potent phytotoxicity against the growth of radicle and plumule of A. retroflexus L., with EC50 values ranging from 234.87 to 320.84 μM, compared to positive control glufosinate-ammonium (Table 3). Compounds 4 and 7 also showed inhibitory activities against the growth of velvetleaf (A. theophrasti Medikus; Table 4). These tested compounds had no significant inhibitory effects on the growth and germination of wild oat (A. fatua L.) and ryegrass (L. perenne L.).

In conclusion, we described seven pairs of azaphilones 11-(E/Z) isomers, including eight new compounds. Their structures and absolute configurations were elucidated based on comprehensive spectroscopic analysis and the comparisons of ECD data. Sclerotiorin B (3), ochlephilone (4), and isochromophilone I (7) exhibited potent phytotoxicity toward the growth of radicle and plumule of A. retroflexus L., compared to glufosinate-ammonium. This will provide new leading compounds for the research and development of marine-derived bioherbicides.

This work was financially supported by Reserve Talents for Yunnan Young and Middle-aged Academic and Technical Leaders (No.202105AC160037), the National Natural Science Foundation of China (41806194), the Agricultural Science and Technology Project of Guizhou Province (2021XM10 and 201803), and the Fundamental Research Funds for Central Non-profit Scientific Institution (1610232021007).

The Supplementary Material for this article can be found online at: https://www.frontiersin.org/articles/10.3389/fmicb.2022.880874/full#supplementary-material

Copyright © 2022 Wang, Wang, Wang, Li, Ding, Lan, Gao, Zhao, Zhang and Wu. This is an open-access article distributed under the terms of the Creative Commons Attribution License (CC BY). The use, distribution or reproduction in other forums is permitted, provided the original author(s) and the copyright owner(s) are credited and that the original publication in this journal is cited, in accordance with accepted academic practice. No use, distribution or reproduction is permitted which does not comply with these terms.