Results: The data showed that miR-122 mimic decreased infarct volumes and decreased MCAO-induced NOS2 over-expression in BMVECs. However, miR-122 did not bind to 3′UTR of NOS2 in the luciferase assays.

Conclusion: The data show the 6-h period of therapeutic efficacy of miR-122 mimic which could relate to indirect knockdown of NOS2 in both BMVECs and leucocytes.

Though many compounds improve outcomes in animal stroke models, none have been effective in human stroke trials (Stroke Therapy Academic Industry Roundtable [Stair], 1999; DeGraba and Pettigrew, 2000; Richard Green et al., 2003; Young et al., 2007; Grupke et al., 2014), except for r-tPA (Fagan et al., 1998; Morris et al., 2001; Gropen et al., 2006). These failures have been ascribed in part to the focus on small molecules that target a single gene, protein, or enzyme. Since ischemic brain may die via many parallel pathways, blocking just one or two pathways may be ineffective.

The suture MCAO model was used to produce ischemic stroke (Liu et al., 2005; Engel et al., 2011) in male Sprague-Dawley rats (250–300 g) anesthetized with isoflurane. A silicon coated suture (Doccol Corporation, Sharon, MA, United States) was inserted into the external carotid artery and advanced up the internal carotid artery to the origin of the middle cerebral artery (MCA) to produce a 1.5 h MCAO. Laser Doppler confirmed that blood flow decreased to <20% of control levels. Following the MCAO, the suture was removed followed by a 22.5 h reperfusion. Sham controls had the identical surgery, except that the suture was not inserted into the MCA. Rats were blindly randomized prior to surgery to receive either miR-122 mimic or scrambled miRNA as a control. This study was carried out in accordance with NIH guidelines. The protocol was approved by the Institutional Animal Care and Use Committee (IACUC) at University of California, Davis.

To examine BMVEC expression of NOS2, brain sections were double labeled with antibodies to RECA1 and NOS2. As expected, there was no NOS2 expression in vessels or brain parenchyma in non-ischemic sham controls (Figures 1A–C). In scramble miRNA treated MCAO animals, however, NOS2 was markedly induced in BMVECs and brain tissue adjacent to the damaged brain vessels in the basal ganglia (ischemic core) 24 h after tMCAO (Figures 1D–F; ##P < 0.01, vs. sham control, Figure 1M). Intravenous miR-122 mimic, given 0 or 6 h after MCAO, decreased MCAO-induced NOS2 expression in BMVECs and adjacent brain tissue and maintained the tube shape of vessels, though some NOS2 was still expressed in cerebral vessels (Figures 1G–I, 0 h data, Figures 1J–L, 6 h data; ∗P < 0.01, ∗∗P < 0.05 vs. MCAO/Scramble miRNA, Figure 1M).

Using the miRanda algorithm1, a comprehensive resource for miRNA-target predictions, miR-122 was predicted to bind to a complementary sequence within the 3′UTR of NOS2. Since the 3′UTR sequence of a gene of interest is cloned downstream of the firefly luciferase gene, the chimeric transcript level is regulated by its interaction/binding with miRNA, resulting in varied luciferase activity quantifiable using a colorimetric assay. Thus, the 3′UTR of NOS2 luciferase plasmids were cloned to a luciferase reporter, co-transfected with miR-122 or scrambled miRNA, and assayed 48hr after transfection into Neuro2a cell lines. The data showed that miR-122 (100 nM) had no effect on luciferase activity when the luciferase vector was inserted with NOS2 3′UTR (Figure 2). Thus, the above results indicate that miR-122 did not directly bind to the 3′UTR of NOS2, but indirectly inhibited NOS2. 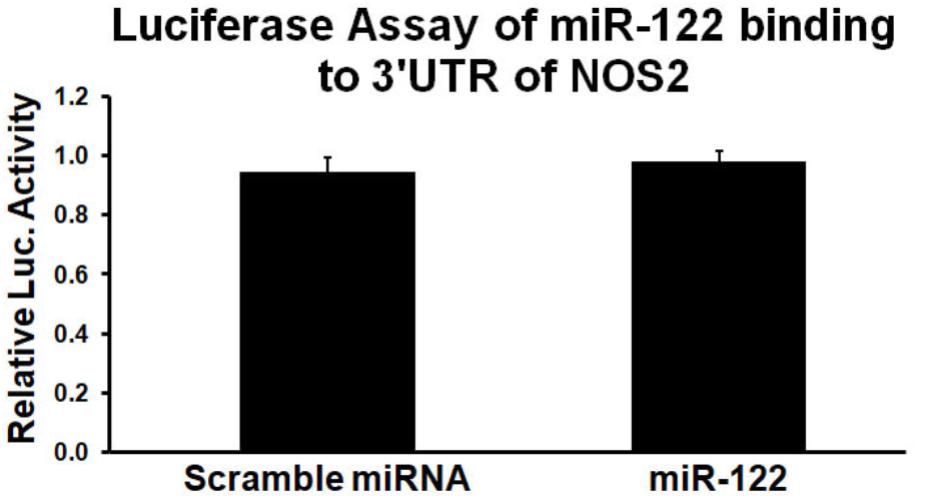 FIGURE 2. MiR-122 mimic has little effects on luciferase activity of wild type NOS2 3′UTR. Results from triplicate experiments were displayed as a ratio of firefly/Renilla luciferase activity, expressed as a percentage of the values obtained in cells treated only with transfection reagents and NOS2 3′UTR reporter clones. n = 3/group.

In our previous study we showed miR-122 mimic decreased NOS2 in leukocytes following MCAO in rats (Liu et al., 2016). In this study we significantly extend these observations to show that miR-122 mimic decreased expression of NOS2 in BMVECs as well. These combined results suggest that intravenous miR-122 mimic acted on both blood leucocytes and BMVECs from the luminal sides of vessels, and are consistent with previous reports that only combined deletion of NOS2 in blood cells and BMVECs prevents brain injury after ischemic stroke in rats (Garcia-Bonilla et al., 2014). Since NOS2 is a key player in the post-ischemic inflammatory cascade, and inhibiting NOS2 has an extended therapeutic window out to at least 6 h (Iadecola et al., 1995, 1996; Garcia-Bonilla et al., 2014), it suggests that miR-122 mimic could have a broad therapeutic window to treat stroke.

Mechanistic studies of miRNA therapeutics usually include assessment of miRNA-target genes. The 3′UTR plasmids provide a convenient solution for quantitative assessment of the inhibitory effect between a miRNA and its potential target genes in vitro. Using the luciferase reporter assay, our results showed that miR-122 failed to bind to 3′UTR of NOS2, indicating miR-122 mimic inhibited NOS2 indirectly. These results suggest that miR-122 acted on an unknown intermediary molecule (like Pla2g2a which is a miR-122 target) which then down-regulated NOS2. Thus, future studies could determine whether miR-122 mimic downregulated Pla2g2a, which was in turn responsible for downregulating NOS2 in both leucocytes and blood vessels.

The data show miR-122 mimic given at 0 and 6 h improves stroke outcome possibly by the combined knockdown of NOS2 in BMVECs in the current study and with knockdown of NOS2 in leucocytes in our previous study. However, miR-122 does not bind to 3′UTR of NOS2, though miR-122 mimic inhibits NOS2 expression. Future studies will be required to determine the target gene(s) to which miR-122 binds that are responsible for inhibiting NOS2.

The Supplementary Material for this article can be found online at: https://www.frontiersin.org/articles/10.3389/fnins.2018.00767/full#supplementary-material

Copyright © 2018 Lv, Cheng, Sharp, Ander and Liu. This is an open-access article distributed under the terms of the Creative Commons Attribution License (CC BY). The use, distribution or reproduction in other forums is permitted, provided the original author(s) and the copyright owner(s) are credited and that the original publication in this journal is cited, in accordance with accepted academic practice. No use, distribution or reproduction is permitted which does not comply with these terms.